Are the 2016 SWMs just rebranded Husqvarnas? Yes. And here’s why we think that’s a good thing.

When we Instagrammed the first picture of us testing SWM’s RS300R and RS500R enduros we got a bunch of armchair critics howling about them being rebranded Huskies. When we asked SWM brand manager Stephen Tuff what he thought of their response, he simply shrugged and said: “Yep, that’s right. And?”

Tuffy explained that the SWM RS300R and RS500R are based on the 2010 Husqvarna TE310 and TE510, with only a few small differences. The SWMs are built around the 2009-2011 Husqvarna engine. The rest of the running gear, like the Kayaba suspension, Magura hydraulic clutch and Brembo brakes, are all top-notch and the same stuff found on the last Italian-built Husqvarnas. The SWMs are not Chinese, they’re Italian. At the North Star Trailride we were often asked if they were Chinese, but SWM confirmed there’s nothing Chinese about them.

The RS300R uses the same single-cylinder, liquid-cooled engine that Husqvarna did five years ago, only this time around its electronic brain has been altered and the mapping tamed down. The RS300 engine feels slightly more trail-oriented than the TE310, with less top-end and more bottom. The engine produces bottom-end torque in any gear, but in a docile manner, and without the strength of a bigger bike. 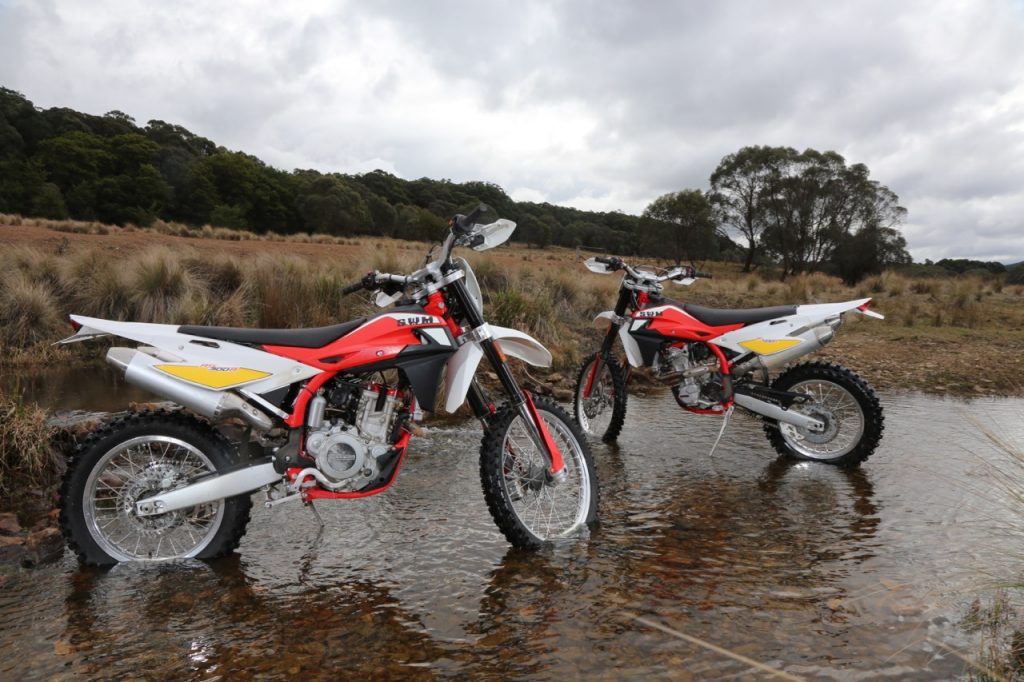 The suspension on the RS300R is soft, possibly more so than the TE310 was. However, soft is good for trailriding. Both ends felt plush all the way through the stroke, but offered very little in the way of firming up near the bottom of the stroke.

As for general handling, the RS300R fits somewhere in between a Yamaha WR250F and a Suzuki DR-Z400E. Standing up and guiding it through singletrack is just as easy as any race-bred enduro bike, just don’t expect to snap open the throttle and wheelie over a log just metres away.

As for the RS500R, the engine feels like a sharper and responsive Honda XR650R. The RS500R was the weapon of choice when climbing hills at our test venue in Braidwood, NSW. While the RS300R produces a healthy bottom-end, it doesn’t conjure up the same brute power the RS500R does.

The suspension on the RS500R is significantly firmer, putting up more of a fight against bottoming. This suited someone of my size better. Like all 500cc dirtbikes, the RS500R could be lugged around in third gear without needing to bash the shifter when the trail tightened.

While handling on the 500 was not as sharp as the 300 and the bike took an extra few metres to pull up, it was still the easier, lazier bike of the two. Just as on the 300, the Brembo brakes, Magura hydraulic clutch and electric leg were faultless.

The RS300R and RS500R feel like more docile versions of their ancestors and perfect for trailriding. The ECU mapping transform the old Husky 310 and 510 into rideable and reliable trailbikes. A soft suspension setup, especially on the RS300R, just accentuates the SWM’s trail readiness and, at a touch over $8000, they’re certainly worth considering next time you’re in the market for a serious trailbike.

For the full feature check out issue #445 of ADB Magazine.