It’s all too common for enduro racers to take a motocross bike and enduro-ise it to compete in the off-road scene. This is because motocross bikes usually come with better suspension and stiffer chassis, giving the machines a more precise feel. Racers have been using YZ-Fs in the bush for some time and demanding that Yamaha change the WR into a model more fitting for enduro racing. Hamamatsu has answered that call and delivered a 2016 Yamaha WR450F which is so much like its motocross cousin that it looks like a YZ-F with a headlight.

To be honest, it is easier to list the differences between the two bikes than the similarities. Basically what Yamaha has done is take the YZ450F and fit parts to make it more suited to enduro riding.

The motor is the same, but there is a wide-ratio, five-speed gearbox and an electric starter with a kickstarter for back-up and the muffler is changed to be ADR compliant.

The radiators have been changed to allow for a thermo fan, new shrouds to get better airflow and thinner engine mounts to promote more controlled flex in the frame. The clutch has been lightened and upgraded to be more durable on long days in the bush, and the KYB suspension remains the same as on the YZ-F units, just revalved for enduro riding and the 18-inch rear wheel.

We headed out to Active8 Yamaha Josh Green’s place in Stroud, NSW. On Josh’s property we had a nice grass track as well as a few singletrack special tests then we headed out on a nice five-hour trail loop to really get familiar with the new 2016 Yamaha WR450F. 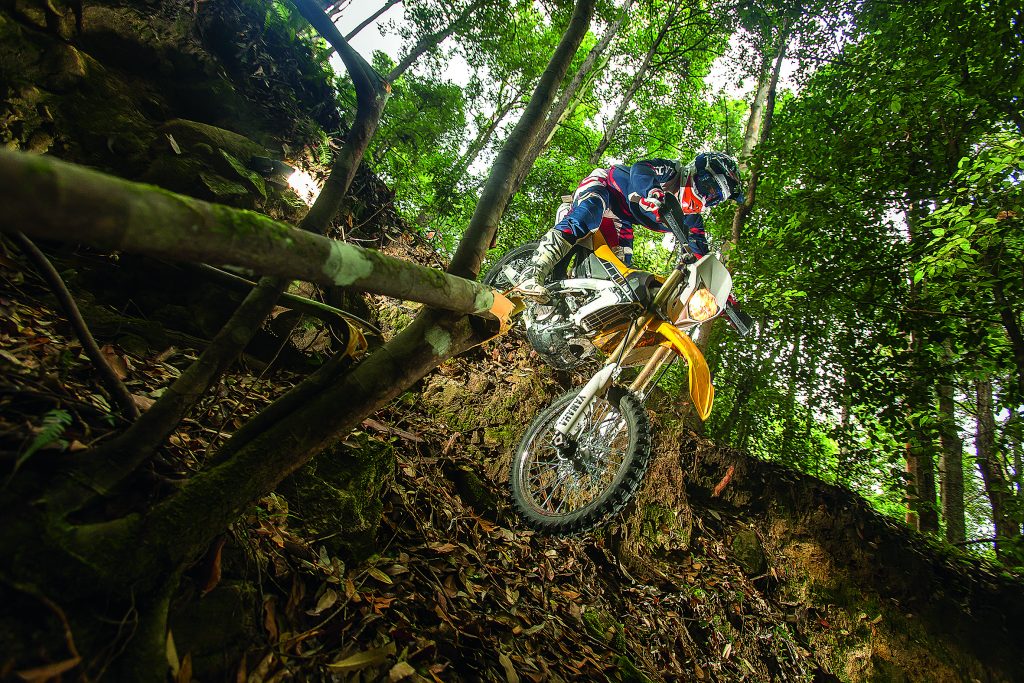 The power of the 2016 Yamaha WR450F really shines bright out on the grass track. The motor is a torque machine, once you wind the throttle on the motor begins to rev up and pulls like a diesel tractor.

I found having the sag set at 110mm was the best for the grass track as the bike would steer into turns easily and get good traction accelerating out, but I had to stiffen the suspension slightly in the front to get it to hold up under heavy braking.

The YZ-F is very well known for being stable and know the WR-F has the same trait. It rarely steps out of line and the front-to-rear tracking is flawless. The lighter clutch is a healthy addition and the larger 270mm front brake makes stopping in a hurry easy work.

Tight singletrack wouldn’t be the WR450F’s strongest suit because it’s such a stable bike. It takes a little more effort to steer it at slower speeds because all the weight is in the centre, which means there is less around the bike to help it steer. The rider has to put more of their own weight into the footpegs to get the bike to lean over and steer.

Standing on the footpegs is very comfortable and there is plenty of room for the rider to move around. I found the WR tended to handle best on tighter trails if you kept your body weight neutral and use your boots on the pegs to get the bike to weave in and out of trees.

The motor is a powerhouse and can be hard to tame on tight tracks. I found second gear to be too aggressive while the engine would labour in third and try to stall, so I loaded another map using the Yamaha Power Tuner which retarded the ignition timing off the bottom and made the bike easier to ride at slower speeds. This map will be available through Yamaha dealers.

The suspension had a nice smooth action in the bush, although I backed off the compression from the grass track setting and wound the rear spring preload off to 118mm to help keep the rear settled in the tight trails.

That preload is what the Active8 Yamaha race team run on all their AORC bikes. It may sound like a lot but the reverse-head Yamaha is a unique bike and requires a set up different to any other brand in order for it to remain balanced and steer correctly. 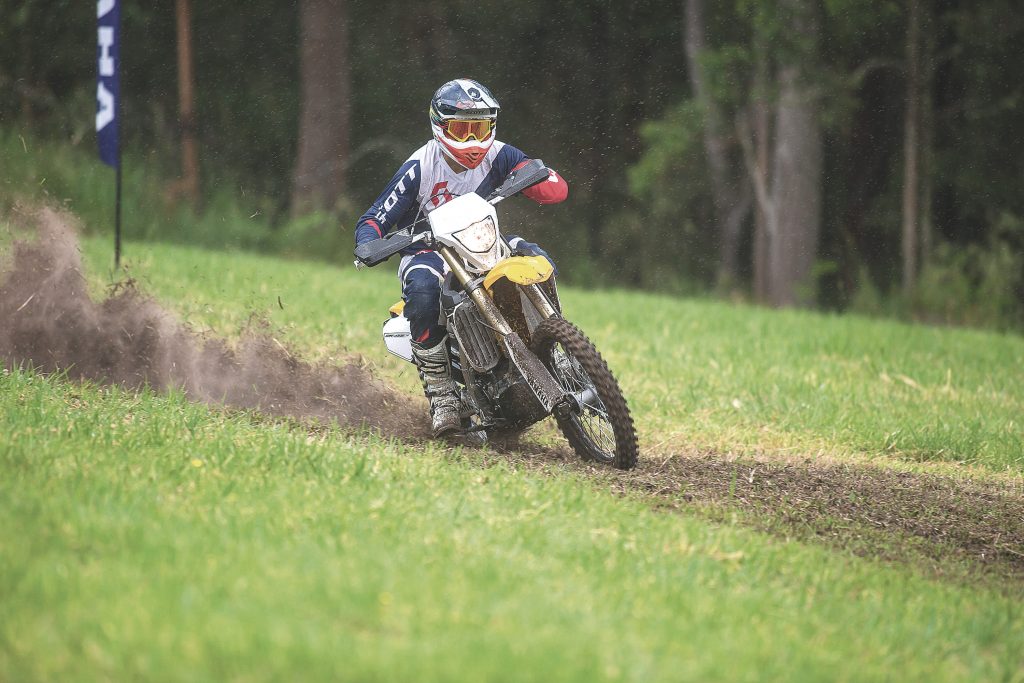 The softer map was the way to go out in the bush as hanging onto a bike with aggressive power for five hours straight would have been tiring.

The KYB shock and speed-sensitive fork have got to be the bench mark in suspension on production bikes and it did everything I could ask for on our trailride. They have a smooth action with a smooth gradual stiffening and very little deflection issues.

The design of the airbox was brought in on the YZ-F to create a straight inlet tract with the reversed motor but this also means the airbox is higher, a huge advantage on creek crossings.

On one creek crossing the water got deeper and deeper and shortly after, my knees started to get wet. I was sure any minute the bike would cut out but after looking down I noticed the airbox was about the only thing above the water. The bike kept driving through and continued to run perfectly for the rest of the day.

Along the trailride we encountered the world’s biggest erosion mounds that reminded me of my days racing supercross. You couldn’t hit them with too much speed as there was one mound every 50 metres and you were landing on the flat.

Usually with stock enduro bikes, the suspension is valved light to give a plush feel, so any hard hits cause the suspension to blow through the stroke and bottom out. Even landing out on the flat, the KYB suspension would soak it up without bottoming out and would ride away smoothly.

The 2016 Yamaha WR450F predecessor was in desperate need of an overhaul, and Yamaha has delivered in spades. 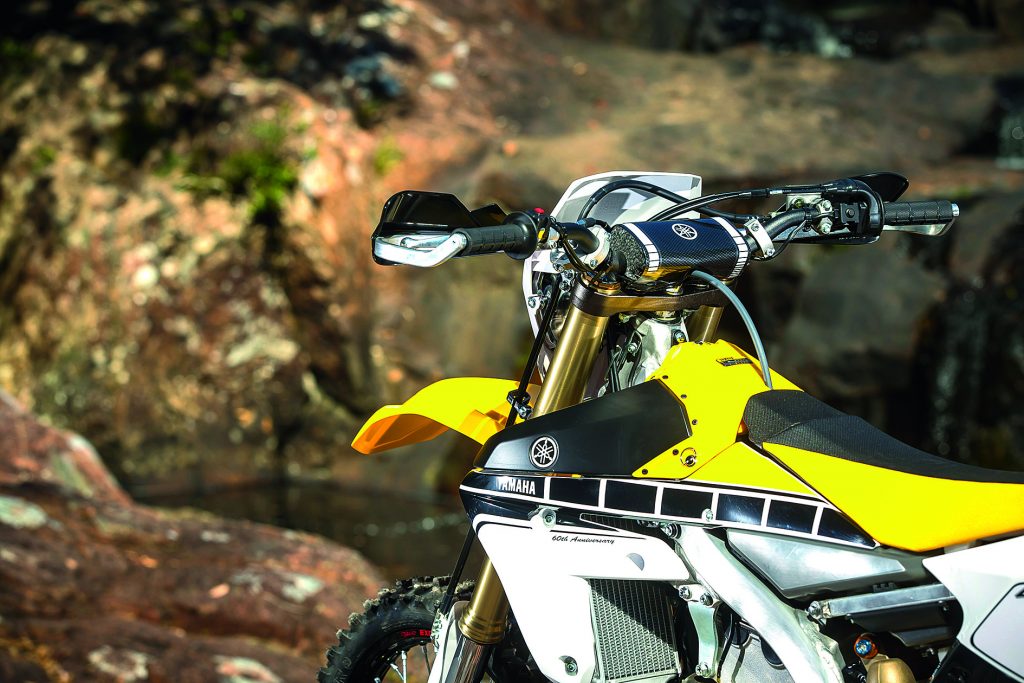 A MESSAGE FROM PETER PAYNE (YAMAHA AUSTRALIA)
The WR has been developed by Australian and New Zealand riders since its introduction in 1998. It has been developed over the years with input from riders such as Josh Coppins, Geoff Ballard, Steven Cotterill and myself. The WR is designed for Australian and New Zealand conditions and, to show thanks for our involvement, Yamaha has offered the 60th anniversary yellow edition to Australasia only.

The 2016 WR450F is essentially the same as the YZ-F of the last few years. This means that there are already many accessories, both GYTR and aftermarket, available. This is good news as when a new model comes out it can take months for manufacturers to start making parts.

It also means that this is a proven engine. It has already done its time over the past couple years and proven that it is a reliable motor without any serious issues. The engine itself is identical to the YZ apart from being fitted with an electric start, wide-ratio gearbox and lighter clutch.

The clutch is revised to make it more durable and there is a different actuator and a larger diameter cable to make the lever pull lighter. The starter motor and starter clutch are new and we will have to wait and see how they hold up. In the early days, Yamahas were known to chew through starter motors and starter clutches, with both being expensive but recently they have become more reliable and a new automatic decompressor means that there will be less load on the starter. 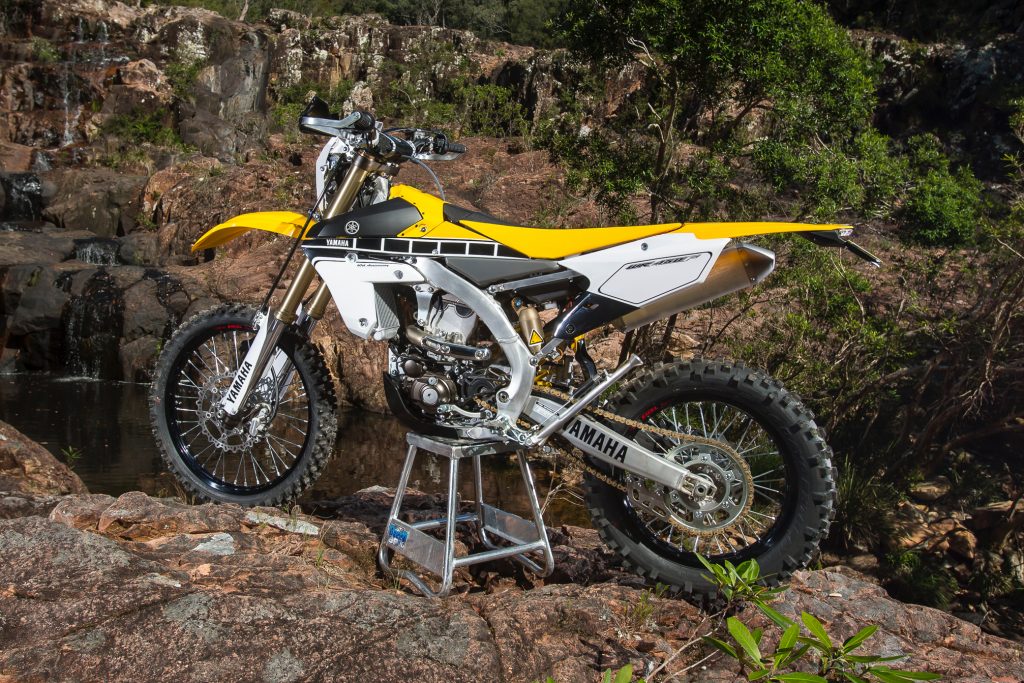