This was never going to be a fair fight. It’s a given that 37 years of dirtbike development should give the latest and greatest 2019 Honda CRF450L a major advantage over the 1983 Honda XR350RD in just about every performance category.

So I decided to do this “comparo” from a different angle and concentrate on observations, all made with a beer in one hand, a notebook in the other and a big bowl of Red Rock Deli sea salt crisps on the workbench, as nearly four decades worth of Honda red roosters stood proudly before me. So let’s get into it …

STARTING
The 2019 Honda CRF450L boasts button start and, of all the developments in dirtbike design over recent decades, starter motors might just be the greatest. Why? Because old thumpers like the XR350RD can be a bitch to start, especially when cold, and always when they’ve been dumped on their side on a hill and you need to go through “the procedure” to bring them back to life … eventually. 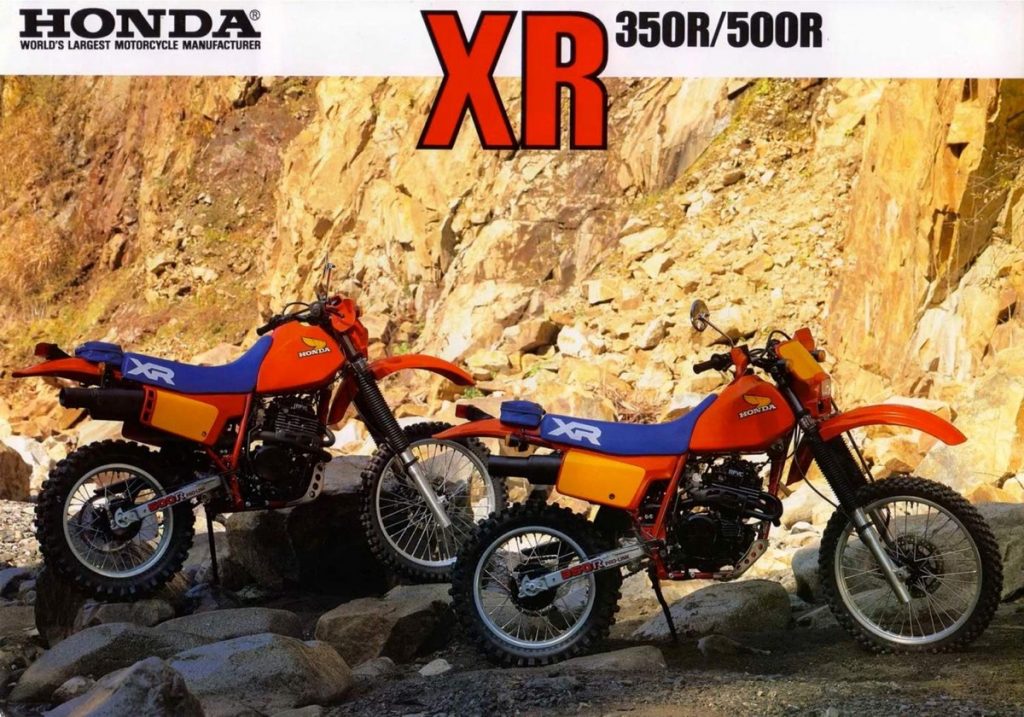 If you’ve been riding kickstart-only thumpers as long as me, you’ll know exactly what “the procedure” is. And it all starts with the decomp lever (remember them?) mounted on the clutch side of the XR350’s handlebar. Four kicks through with the decomp pulled in to clear the flooded engine of fuel, release, then find TDC, then kick it through like you mean it.

Compared to all that, the button is worth the price of admission every time. The manufacturers are getting so cocky about the button now that there’s not even a kickstarter on many of them, so you need to keep the CRF-L’s battery in good nick.

POWER
A squeak over 22hp was listed on the spec sheet for the 350RD in standard trim. The 2019 Honda CRF450L delivers 23.6hp in ADR trim, or just over 38hp with the pipe and airbox uncorked (if you’re happy to believe Wikipedia). With the $2600 LX Enduro Kit (FMF exhaust and Vortex ECU) fitted on our CRF long-termer we’d feel pretty safe to say it delivers twice the power of the XR – now that’s progress! 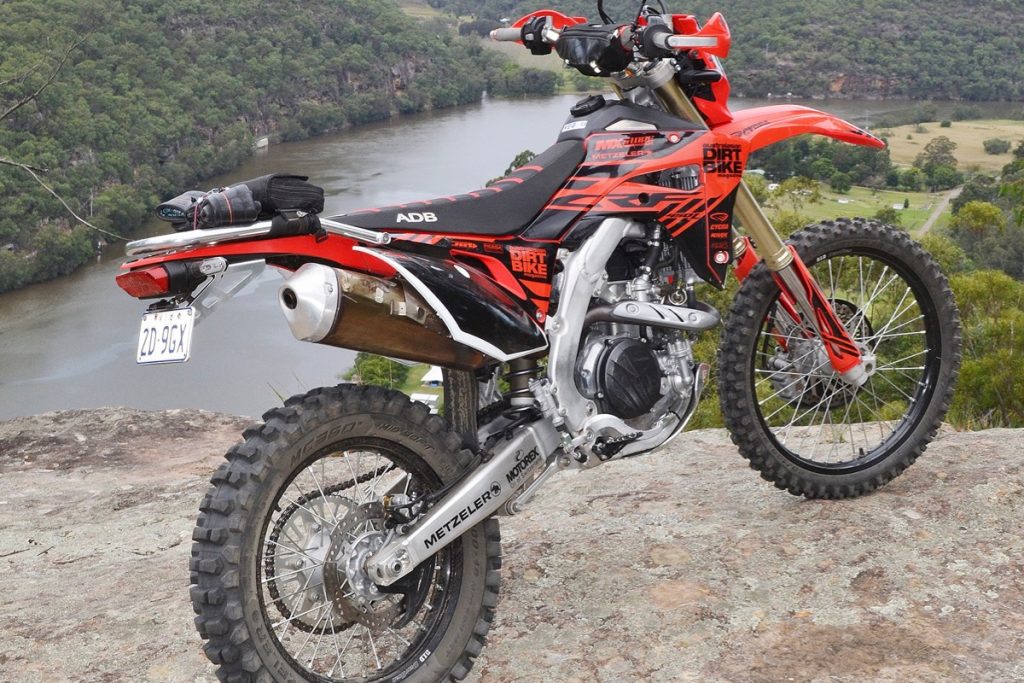 ENGINE COOLING
Liquid-cooling helps engines run harder for longer, for sure, and while the 450L is carting around a couple of radiators, a water pump and associated plumbing, we’ve come to love the benefits of liquid-cooling. Yes, the stock 450L runs hot in its lean standard tune to help meet global emissions standards, but that’s nothing compared with the XR’s air-cooled mil, when you’re buried in a steamy Harrow Vinduro bog hole for half an hour trying to plough your way out. That delicious waft of frying clutch plates and boiling engine oil is a smell your nasal passages will never forget.

ENGINE OIL
There’s just 1.15 litres of GN4 engine oil in the 450L’s Unicam motor. By comparison, the XR carries almost twice that amount of Texas Tea, with two litres of 10W40 in its crankcase.

Honda’s maintenance schedule says the CRF requires an oil and filter change every 1000km, whereas it’s every 1600km on the XR. We’re still waiting for someone to come up with an oil tank or cooler to extend the CRF-L’s service intervals.

INDUCTION
Fuel injection is another fabulous advance. It delivers improved fuel economy and tuning/mapping opportunities with an aftermarket ECU like the Vortex X10 unit we’ve fitted. The 350R has a Keihin twin-carby set-up to feed its RFVC four-valve head, that in its day was pretty trick, but when it came to jetting them, well, the less said the better.

CLUTCH
Nice and simple cable-operated clutches on both bikes. The era of hydraulic clutch actuation has only just made it onto Honda’s 2020 factory motocrossers, so the trailbikes will be waiting a while. 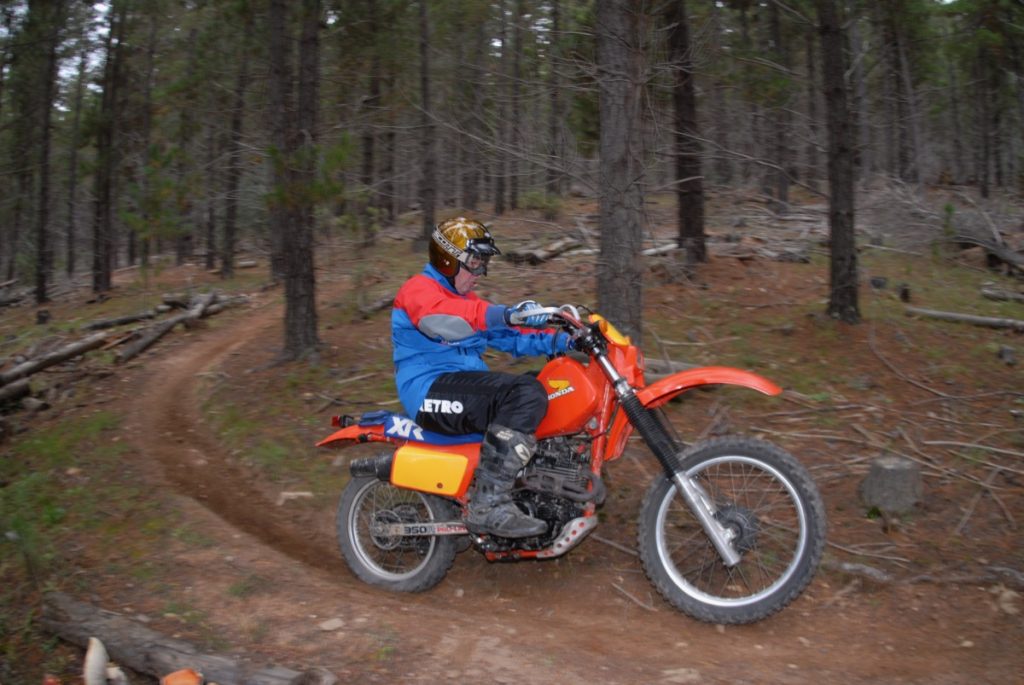 MUFFLER
Scary to admit it, but there’s been little change here in 37 years: the XR was blessed with a whopping steel muffler, and so is the CRF! Fitting a lighter and freer breathing silencer to the XR was the red hot tip back in the day, and so it remains with the 2019 Honda CRF450L.

BRAKES
The XR was blessed (hah!) with drum brakes front and rear. I still get nightmares remembering the first time I rode the XR at the famed Harrow Vinduro in the pissing rain and having NO BRAKES on every downhill. I got out alive and the first thing I did when I got home was have a 1984 RE front-end with drilled disc fitted (see page 70). It was the best money I ever spent on the bike. The CRF has hydraulic disc brakes front and rear and their performance is sooo much better than the XR’s brakes.

HANDLING & SUSPENSION
The XR was actually a quite reasonable handler back in the day – by four-stroke standards, in an era when two-strokes ruled the enduro roost. The 350’s steering was way quicker than its big brother XR500R, but not as quick as the XR250R. It really was a happy medium. The 350’s suspension action was soft, by race bike standards, but at trail speeds it wasn’t bad. Ironic that we can say pretty much the same about the CRF, even though the 450L’s longer-travel USD fork and monoshock rear-end are way improved. 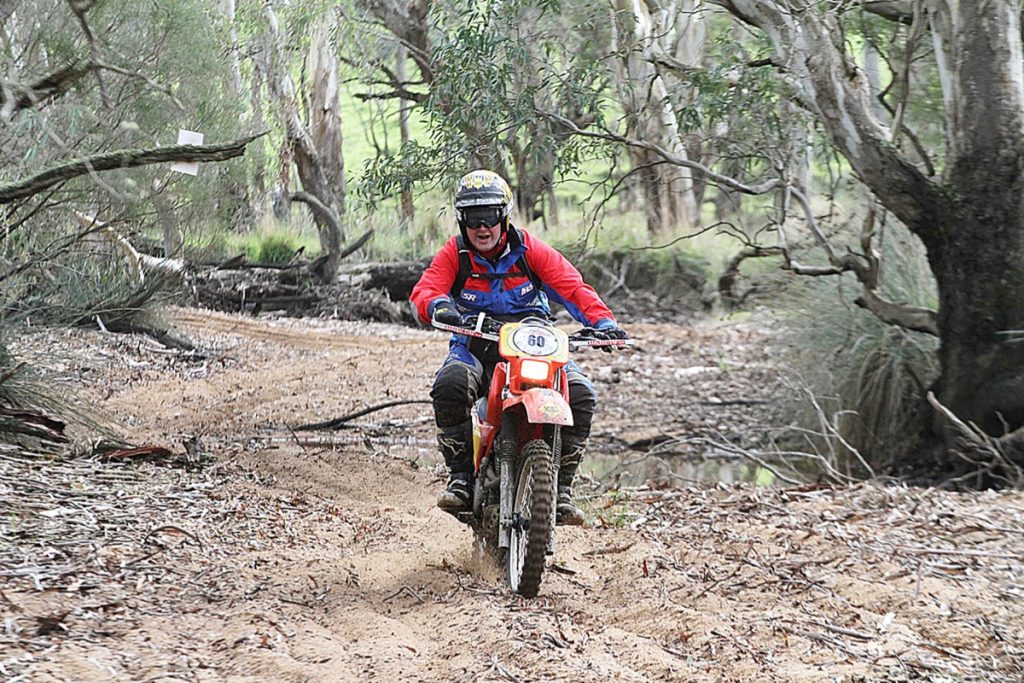 HANDLEBARS
In the 1980s, standard handlebars were dreadful steel units which, on the XR, were fitted in mounts that pushed the ’bar back toward the rider – can you say cramped? Delicious Renthal alloy 7/8th inch ’bars are fitted as standard to the CRF, which has a way more modern and open cockpit.

FOOTPEGS
How small and narrow were footpegs back in the day? The XR’s stock ’pegs were dreadful, so I replaced them with IMS accessory items. The CRF’s ’pegs are not huge, but they’re way better than the XR’s.

SEATS
The XR’s seat is soft, the CRF’s seat is firm. Despite being opposites, both seats make you want to ride standing up more than sitting down! 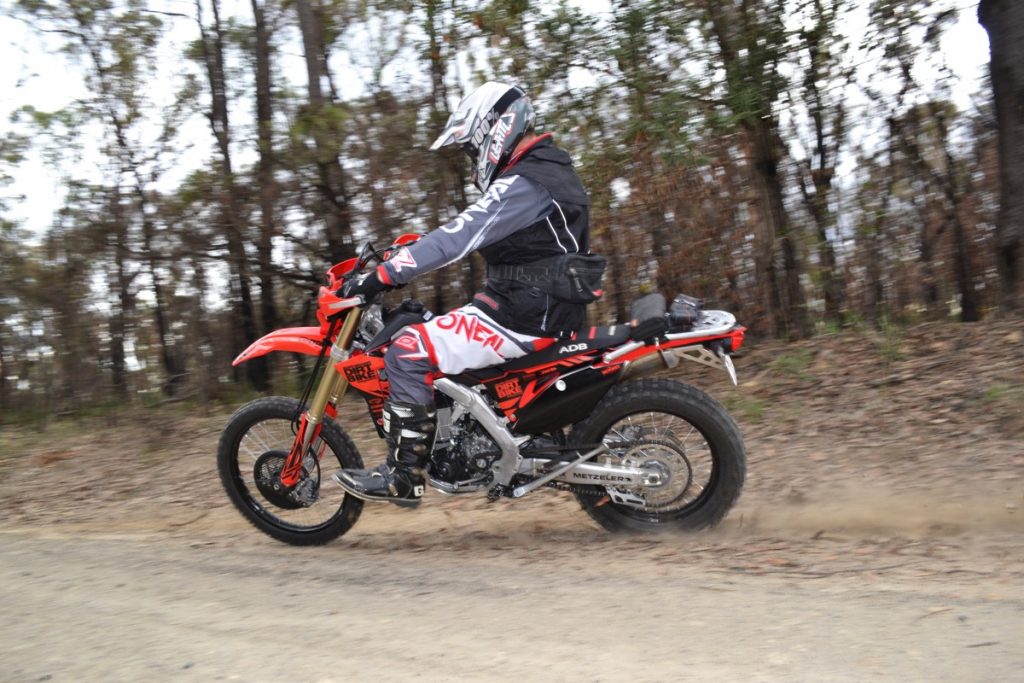 HEADLIGHT
The XR’s headlight did little to light the trail after sunset, simple as that. The CRF’s headlight is better, but you won’t be using it for ’roo spotting at midnight.

FUEL
The XR features a 12-litre plastic tank in Honda’s famous racing Flash Red colour. The CRF is fitted with a 7.6-litre unit made from titanium which is light but too small. We fitted Nomad’s 11-litre number. 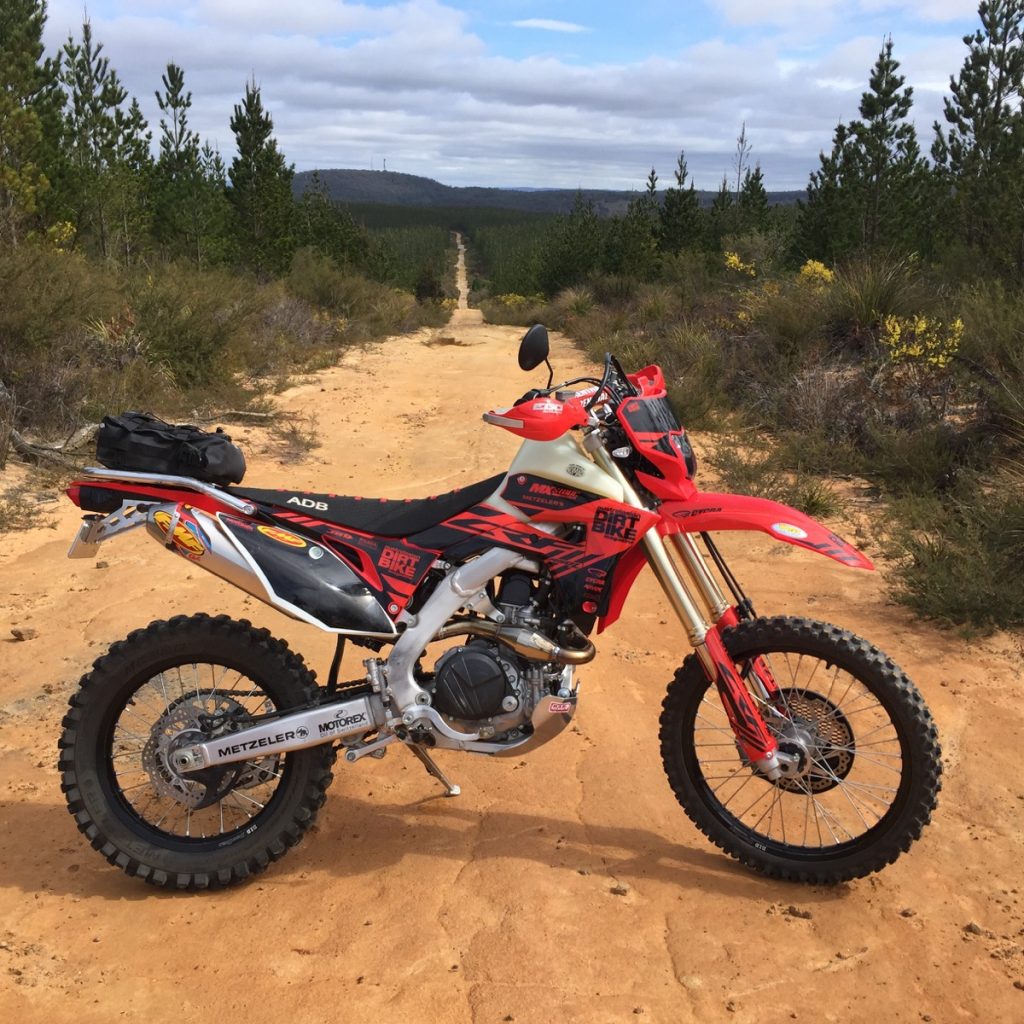 TOOLBAG
Every self-respecting enduro bike in the early 1980s boasted a rear-guard-mounted toolbag that even came with tools. The XR’s had a plug spanner and multi-tool that let you get the wheels out. So cool. On the CRF we’re carrying our own tools in an Enduristan XS Base Pack strapped to the beautiful B&B Off-Road rack.

17-INCH REAR WHEEL
Back in the late 1970s and early ’80s, Honda was experimenting with some, shall we say, weird wheel sizes: who remembers the 23-inch front wheels on some of Honda’s early CRs, XRs and XLs? The XR350 was fitted with a 17-inch rear, but it’s fair to say the concept never caught on. Trying to find a decent 17-inch enduro tyre these days is hard work but I run .

SNAILCAM CHAIN ADJUSTERS
Okay all you junior burgers, this is where you say, “what the?” Snailcam chain adjusters were another enduro feature of the early 1980s that made chain adjustment a breeze, plus you only needed one tool for rear-wheel removal: an axle spanner. The rear drum brake actuating rod was held at the rear by a wing nut, which could be undone by hand: too easy. The XR’s swingarm even had little tabs at the back where you could position the wheel while you got the axle, chain, brake drum and spacers all lined up for fitting/removing. With legendary American Honda off-road racers Al Baker and Bruce Ogilvie on the XR design team, little wonder it has such enduro-oriented details but that was a long time before mousse tubes.

WEIGHT
Finally, Honda lists the XR as 112kg dry, while the CRF is listed at 131kg wet. Remove 7.6 litres of fuel, plus oils, and the CRF will still tip the scales at least 10kg above the XR’s claimed figure. Editor Mitch Lees got our long-term 2019 Honda CRF450L down to 124kg by removing items that weren’t needed for off-road use but I brought it back up by making it a dualsport bike and adding the rack and some protection. I did get 3.3kg off by adding the FMF pipe but I’m not brave enough to weigh it again.

VERDICT
So is there a winner in this comparo? No chance. If you’re a crusty old vinduro fan (like me) with a penchant for thundering old XR thumpers (like me) then you’ll spend endless hours combing Gumtree and Bikesales (like me) waiting to pounce on the next old banger that comes along. And why are we toey for them?

Because we had them when we were young bucks and everything pooled is new again, right? I love my old XR, but the kicker is, I only love riding it for an hour, or two, because that feeling of nostalgia can only last so long … then your bones start shaking and your fillings start rattling. As for the 2019 Honda CRF450L, well, let’s ride all day!

Honda four-stroke motorcycles are the stuff of legend, especially the XL trailbikes and XR enduros. The first model to carry the XR designation was actually the XR75K0 minibike released in 1973.

Meantime the first ‘true’ XRs were the 1979 XR250R and XR500R enduros – adorned with 23-inch front wheels – that were better specced and more off-road oriented than the XLs of the day. Being road-registrable, the XRs soon overtook the XLs in sales in Australia and, through the mid-to-late 1980s and early ’90s, the XR250 and XR600 took turns as Australia’s top-selling registered motorcycle.

Then in 1996, the XR400R took over from the 350 and it quickly captured Australia’s sales crown by delivering what many riders enjoyed as the perfect mid-size machine. The XR400R remained at the top of the sales charts until Yamaha released the WR400F in 1999. The XR400R was finally discontinued after a decade in 2006, two years after the XR250R signed off.

As for the big-bore end of the XR range, the XR600R (that was launched in 1985) was eventually replaced by the booming XR650R in 2003. It had an aluminium frame and liquid-cooled engine but still no start button.

Like Holdens, XRs hold a special place in the hearts of zillions of Aussie dirtbike riders. Today the sole XR models in Honda Australia’s line-up are the XR150L and AG-XR farm bikes.