For MY20, the Beta RR125 received a host of upgrades which came straight from the 2019 Racing models and Beta has squeezed a few extra ponies into this 94kg (dry) weapon.

As a fan of small-bores, I was pretty excited to ring the neck of a Beta RR125. Sure, you don’t get out of corners or fly down straights as fast as you would on a bigger bike, but there is something about charging into a berm without shutting off that just seems to make everyone happy.

And let’s be honest, have you ever met someone who doesn’t appreciate the sound of a 125 wide open? Beta introduced the RR125 to its line-up in 2018 and it has made big changes since then.

For MY20, the 125 received a host of upgrades which came straight from the 2019 Racing models and Beta has squeezed a few extra ponies into this 94kg (dry) weapon. The machine has had the same revamp as the rest of the enduro range and it definitely looks the part. 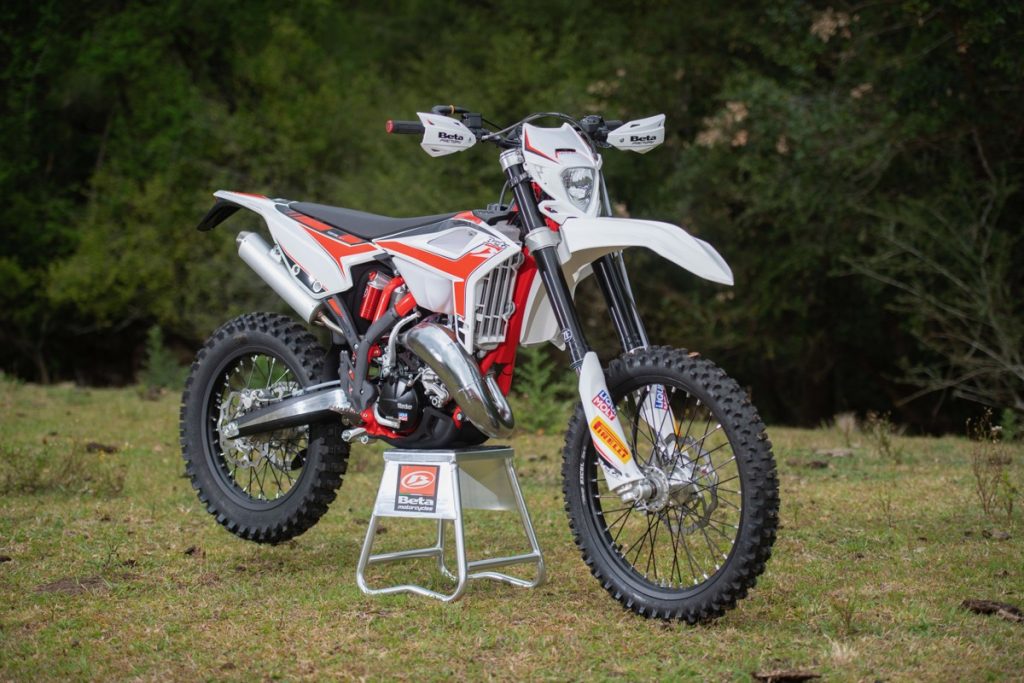 I really like the sleek, slimline feel that you get when sitting on the new Betas and the 125 especially feels tiny.

Engine wise, the RR125 gets a new cylinder with modified exhaust port, exhaust port flange, power-valve system and a new pipe and silencer. All these changes create a broader, more torquey engine at low revs while also producing better top-end. Beta claims that these mods have increased the performance across the entire rev range, which makes the bike much easier to ride. So, do all these mods actually work on the track? Short answer is yes. The RR125 is so much fun to ride and, sure, you have to be on the ball with the gearchanges to ensure you get the most out of the bike but that is just the 125 way of life. On the fast and flowy test loop at the Aussie Beta launch in Kyogle, you could keep your momentum up through the corners and remain in the sweet spot of the power.

Unlike a motocross 125, which can be super snappy and hard to ride, the Beta is very smooth and predictable and, as a result, it would suit a wide range of riders. A Junior who is stepping up from an 85 or someone who is learning would love this bike, especially with the luxury of electric start. I thought that it was a little overkill chucking an electric start on a 125, but it’s handy. 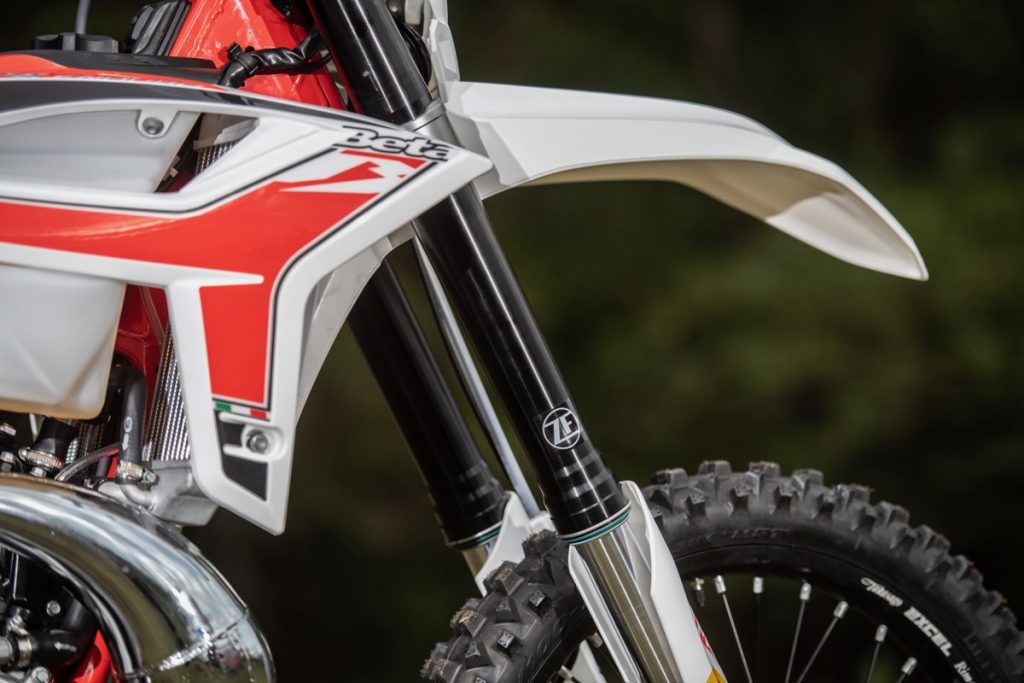 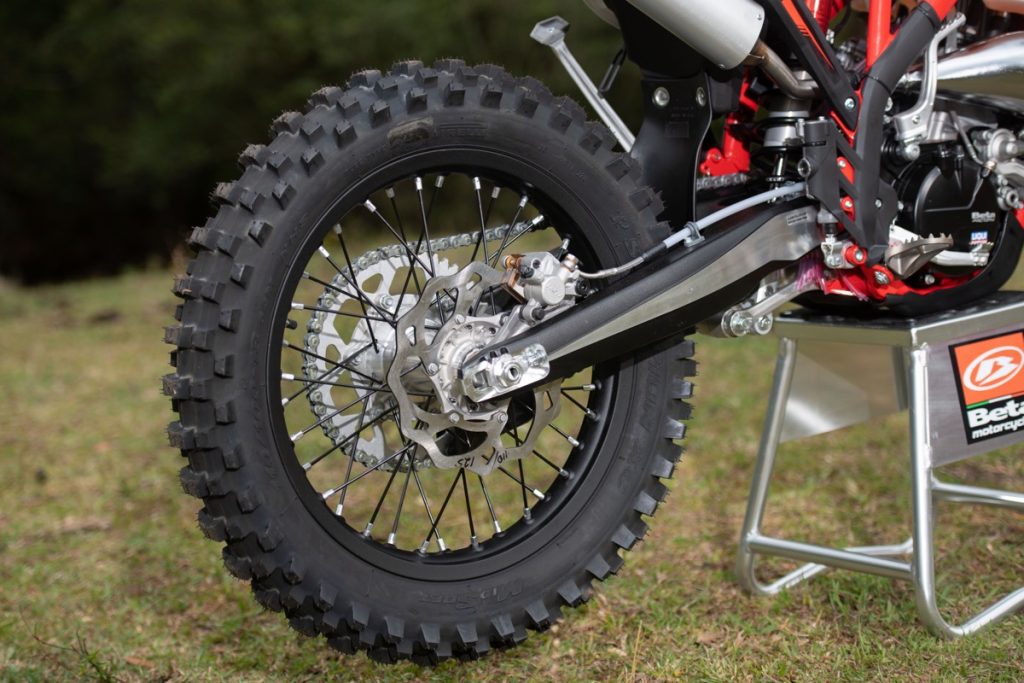 The torque off the bottom was stronger than I was expecting and didn’t require much clutch to get up and go. The Magura hydraulic lever’s action is very smooth and super light so it’s easy to give it hell out of a corner.

I thought the guys from Beta Australia had the test bike jetted spot-on as well so it was very crisp and revved out cleanly. The RR125 comes with a six-speed gearbox that works seamlessly, which is great because you are constantly giving the gearbox a workout.

It has a map switch on the top frame tube and, while some riders might want to play around with the Wet and Dry maps, I would just leave it on Dry and have maximum power.

The suspension and handling of the 2020 range has been upgraded and I believe the 125 (and the 200 for that matter) are the pick of the bunch in terms of handling. The 48mm ZF open-chamber fork is a tad soft on the heavier bikes but on the 125 it feels pretty solid. Due to having less weight on it under brakes, the fork seems to hold up better than on, say, the big-bore four strokes so I found myself able to push the 125 into corners with good confidence. 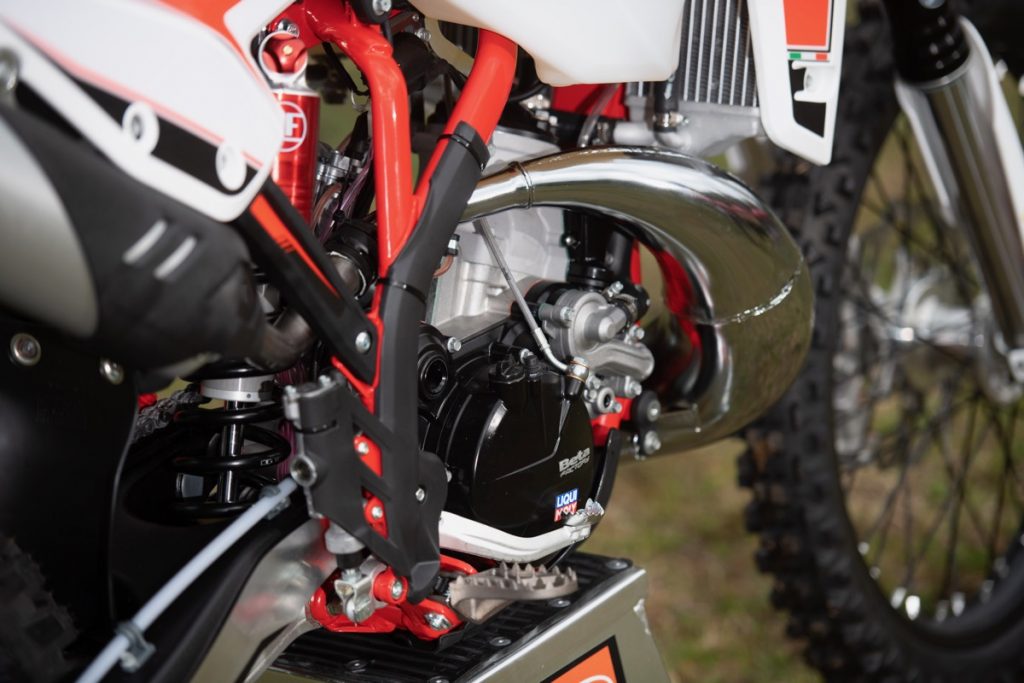 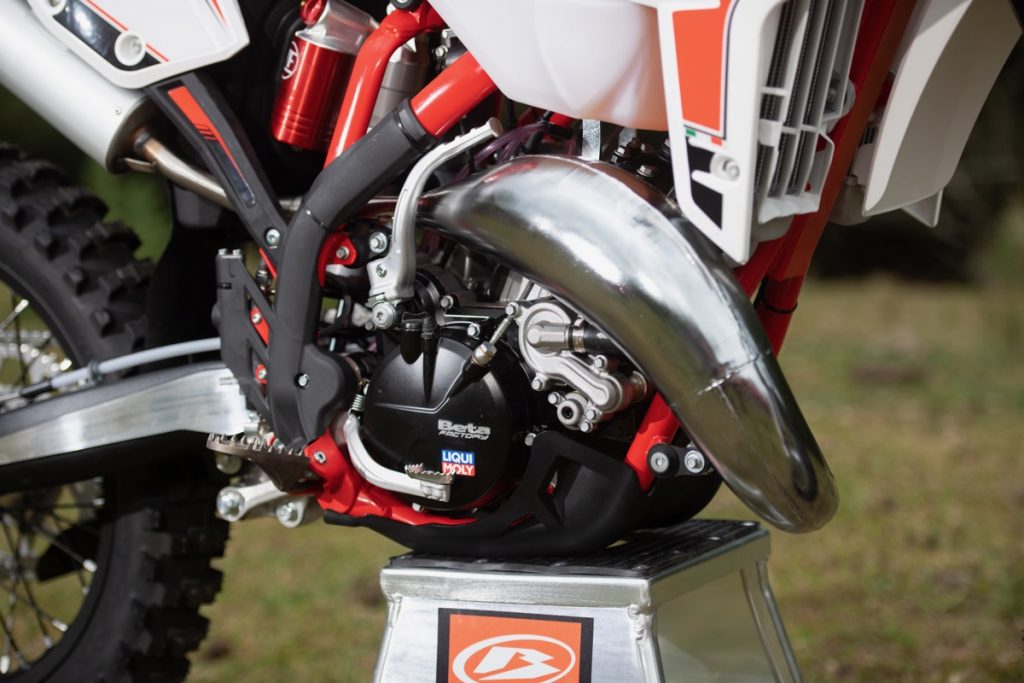 All models have an external preload adjuster on top of the fork which gives the rider up to 10mm extra preload. I found that an extra 3-4mm from stock was my sweet spot on the 125 and it was plush and handled the rugged terrain at Kyogle pretty well.

NOT OUT OF SHAPE
The new ZF shock is predictable and keeps the rear wheel on the ground so you can get maximum drive. One thing I always find interesting on a small-bore bike is the fact that they don’t deflect or get out of shape. I don’t know whether it’s a weight or power thing but if you have ever hopped on a 125 and had a bit of a go on it, you would notice that you rarely have out-of-shape or scary moments on them. Even on some of the sketchy, fast sections of the Kyogle test loop, I could keep the RR on the pipe and just power over the roots without worrying too much about the bike stepping out. I wish I could feel like that on a big-bore. The thing I really enjoy about not just the Beta 125 but all 125s is how light they are on the track. Coming into a corner especially, they stop on a dime and you can switch lines so easily. I really liked how easy the RR125 is to manoeuvre around on the hills should you ever have dramas getting to the top. You don’t realise how light the bike is until you have to skull drag it around the place.

The improved chassis and overall look of the 2020 Betas is a big step in the right direction and you feel very comfortable on the bikes as soon as you sit on them. The new handlebar is on the low side, which I prefer, and the flatter seat makes it easier to move around, which is great considering you spend most of your time swinging off the back. 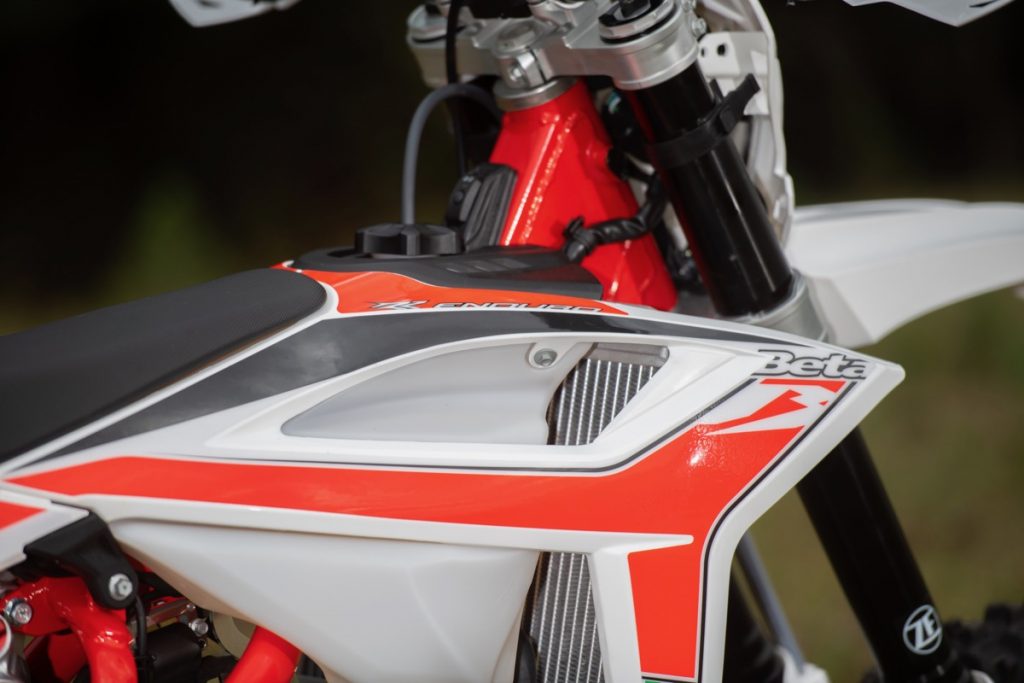 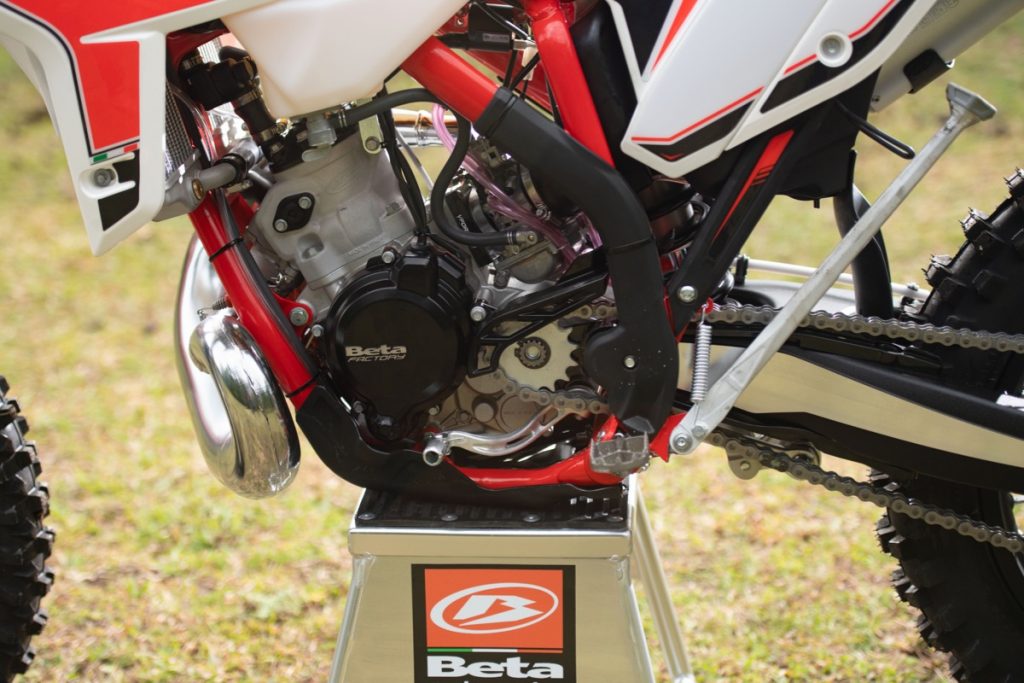 They have done a great job making sure all the electrical components are tucked away nicely in the new composite subframe and the air filter access and fitting has been totally revamped and it is now idiot-proof. Kudos to Beta for that. The 9.5-litre tank ensures you can ride the little weapon all day too.

VERDICT
Sure, 125s may not be everyone’s cup of tea. You have to be on the money with your throttle control, gearchanges and line selection. You have to make sure you carry good speed everywhere so you have plenty of momentum for whatever lies ahead.

But, in saying that, I feel there isn’t any other bike that offers the fun factor of a 125. The sound, lightness and smiles that they bring is always a winner. The RR125 ticks all the boxes when it comes to the smile scale and I really enjoyed riding it.

The engine is smooth, predictable and produces decent torque, and having the bonus of electric start without a big weight penalty is a nice touch. It feels great on the track and the ZF suspension seems to suit the lighter bikes.

You really just cannot beat the sound of a 125. They may not be the fastest up the straights but they definitely sound the fastest and that is what really matters. 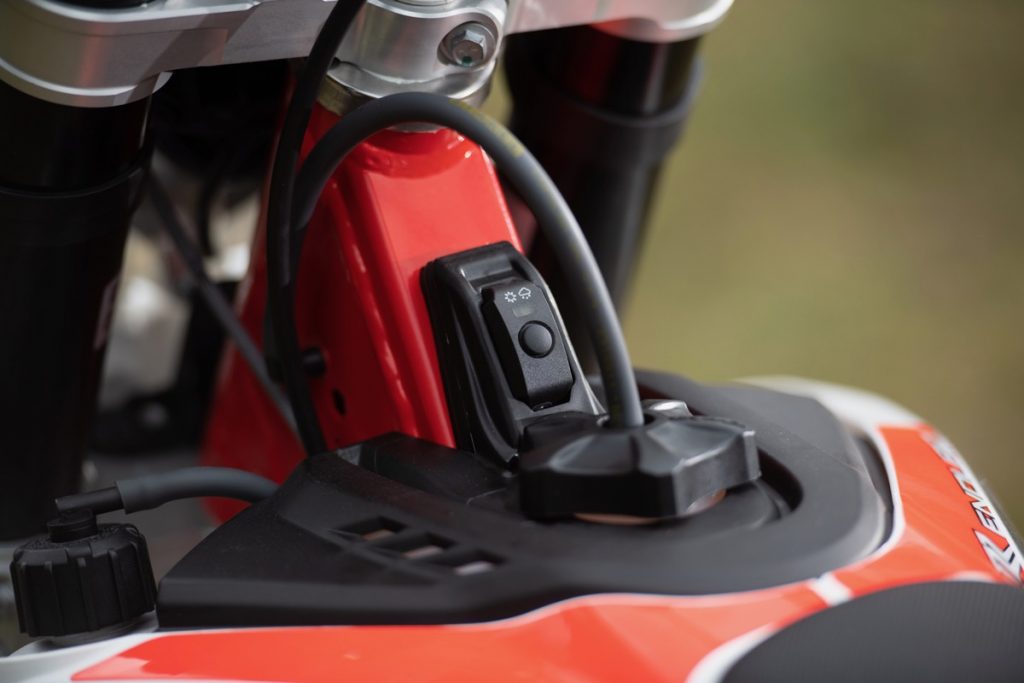 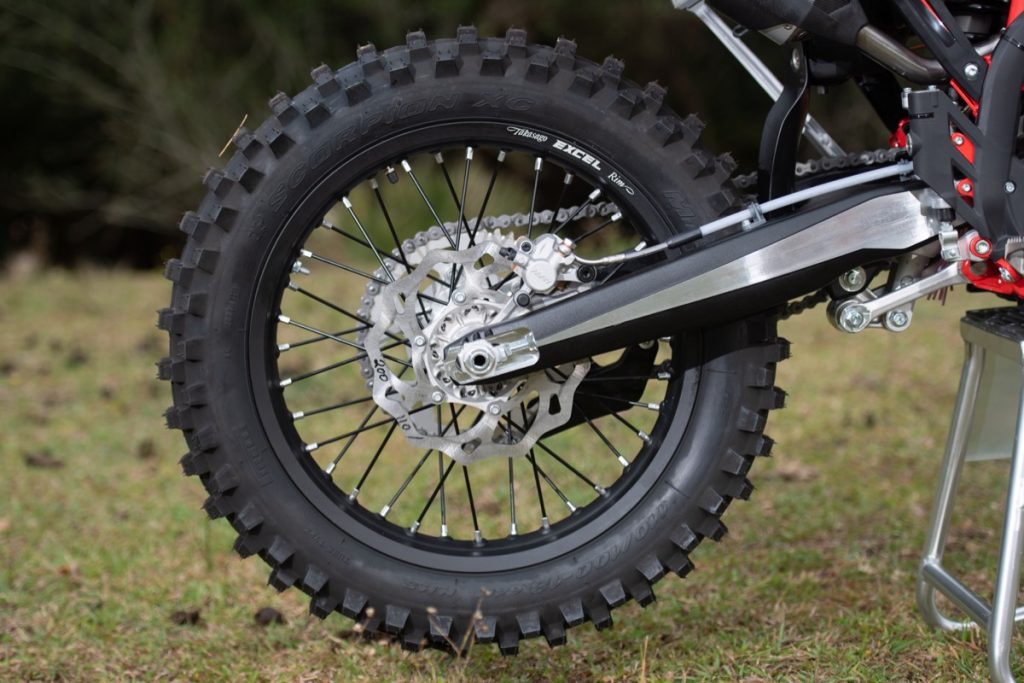 Beta Pay Attention
At the Beta world launch in Italy, I nearly got taken out of proceedings on the first lap. After spending the best part of two days getting to Tuscany, I was so excited to get out and ride the RR125. It was the first bike that I hopped on and I set off into the Italian countryside with a smile on my face.

I had heard about the slippery rocks but didn’t really think about them being too much of a problem on the 125. I popped out onto the grassy hill at the top of the mountains and railed around it smiling the whole way. As I took the view in, I thought how good is this? However, I didn’t see the singletrack drop away over a rock shelf and the little 125 spat me off and yard sailed me down the valley.

I hit the deck hard and slid for what felt like an eternity on my head. When I finally stopped tumbling, I got up to see the 125 literally sitting against a tree virtually upright and almost mocking me like “what are you doing, man?” Meanwhile, here I was with a shredded helmet, ripped jersey and pants, grazes from top to bottom with no idea what the hell just happened. Monza Imports would be furious.

I crawled back to the bike and lucky enough for me, nobody saw the crash so the 125 and I just kept that quiet. Moral of the story, don’t take your eyes off Italian singletrack even on a 125!