When Beta released the first teaser shots of its 2020 enduro machines in early July, it proudly announced that a new generation of bikes was on the way.

Speaking with the guys at Beta about which bike they would choose from the new range, just about every one of them said the Beta RR390, even reigning EnduroGP champ Steve Holcombe, who was at the launch, mentioned that he was all about the 390 and there’s a strong possibility of him racing one next season. 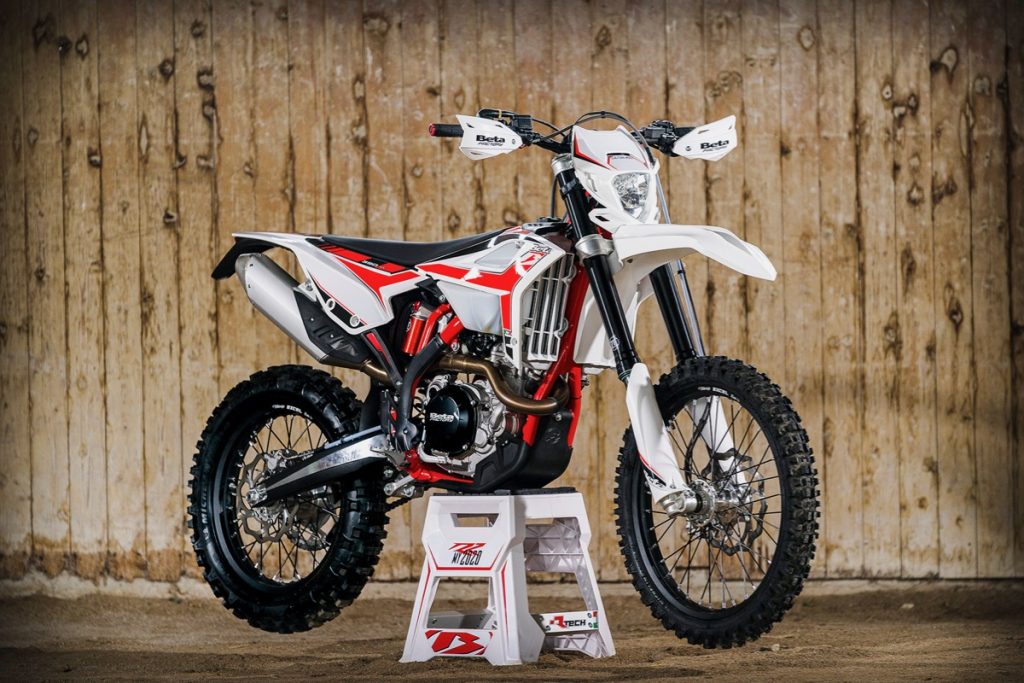 As soon as you look at the MY20 Beta RR390, you can see the difference from the previous model. Combine the redesigned and lighter red frame with the more streamlined red, white and black colour scheme and the Betas look the business.

Beta management made a point of telling us that they put a huge amount of effort into making the new chassis tie into the new plastics, with minimal lips and ridges for riders to get hooked up on. The seat is a lot flatter and they emphasised that they wanted the action of moving forwards and backwards on the bike to be effortless.

Sitting on the Btea RR390, it feels small and nimble. It’s quite skinny across the seat and shrouds and, like they promised, it’s easy to move around on the bike despite the 1.1-litre larger tank. The perch certainly feels a lot flatter although, after riding it, I would like a little more foam, especially at the rear.

The handlebar position has changed as well now that they have gone with a flatter, MX-style bend and you now feel like you are more at one with the bike. I like flatter, racier ’bars as I feel like you can be more on top of the bike, especially when you are trying to push along the trails with some pace. 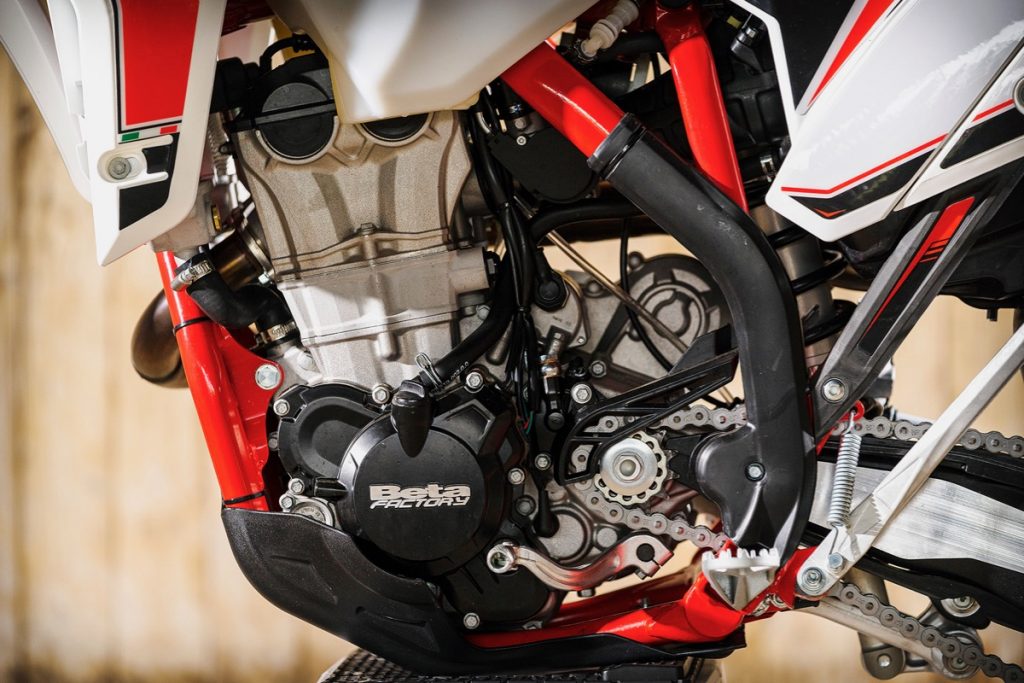 They’ve cleaned up the cockpit too, with the map switch having been moved down onto the frame backbone behind the steering head and completely out of harm’s way, which is great. The new digital speedo is tucked in comfortably behind the headlight and, just like the plastics, is very slim and neat.

Everything about the new chassis has been conceived with the idea of keeping the bike as easy as possible for the rider to maintain. The new subframe, in particular, is fantastic. The three-piece design is made from “techno polymer” plastic and has all the clips, hooks and cutouts for the wiring harness built in so that the electrics are protected and easy to reassemble should you ever pull things apart. It also includes a seat-release button and the air filter access is simple, with a similar idiot-proof design to its Austrian competitors, and I think that is a very smart move. 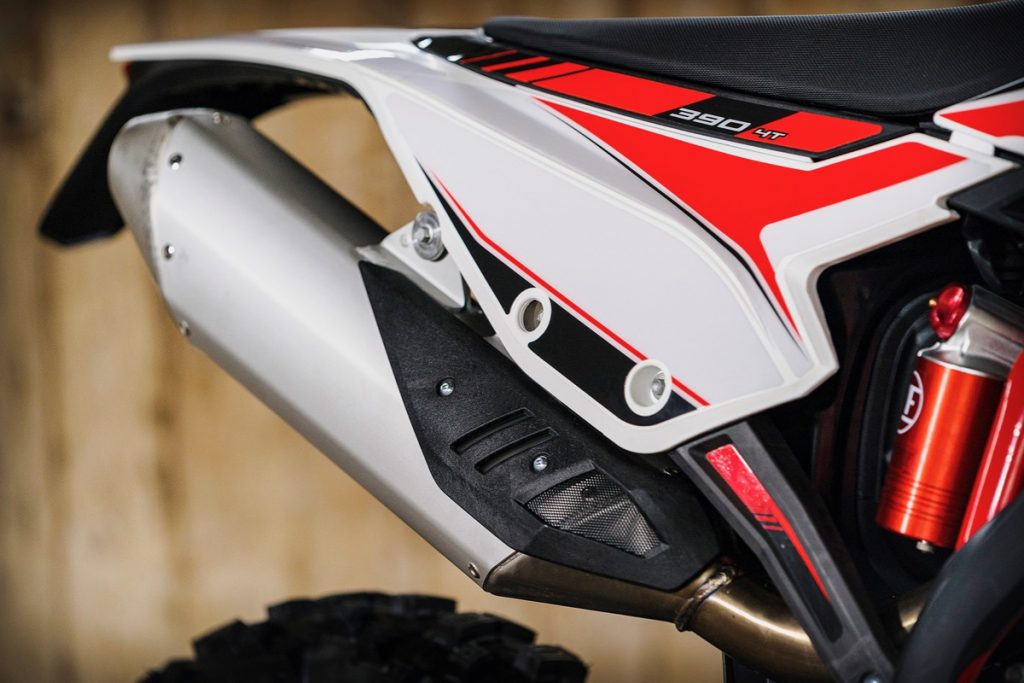 ON THE TRACK
Before I get into how the bike goes in the dirt, I’ll quickly run through everything there is to know about the engine. Firstly it’s completely new. Beta has shaved over 1kg off the motor while boosting the performance and efficiency. The crankshaft is now closer to the swingarm pivot, which essentially moves the centre of gravity back. Not only does the bike weigh less than the MY19 model, it feels lighter to ride, especially under brakes.

Building a more powerful engine is one thing, but doing that and making it lighter is a dangerous game. Luckily, Beta was all over that and equipped the four-strokes with redesigned lubrication circuits, cooling system, clutch and gearbox to cope with the punishment of the extra power. It has beefed-up radiators that hold more coolant and keep the engine running cooler even if you’re into doing slow, extreme-enduro type riding. The cylinder and head benefit from the new cooling system as well and they help the new powerplant get maximum traction.

I fired the beast up, clicked the map switch onto the “dry” setting, as the test loop resembled something along the lines of an ISDE Special Test after 500 riders, and set off onto the first grasstrack section. I was pretty eager to see why everyone was so happy with how the RR390 felt. 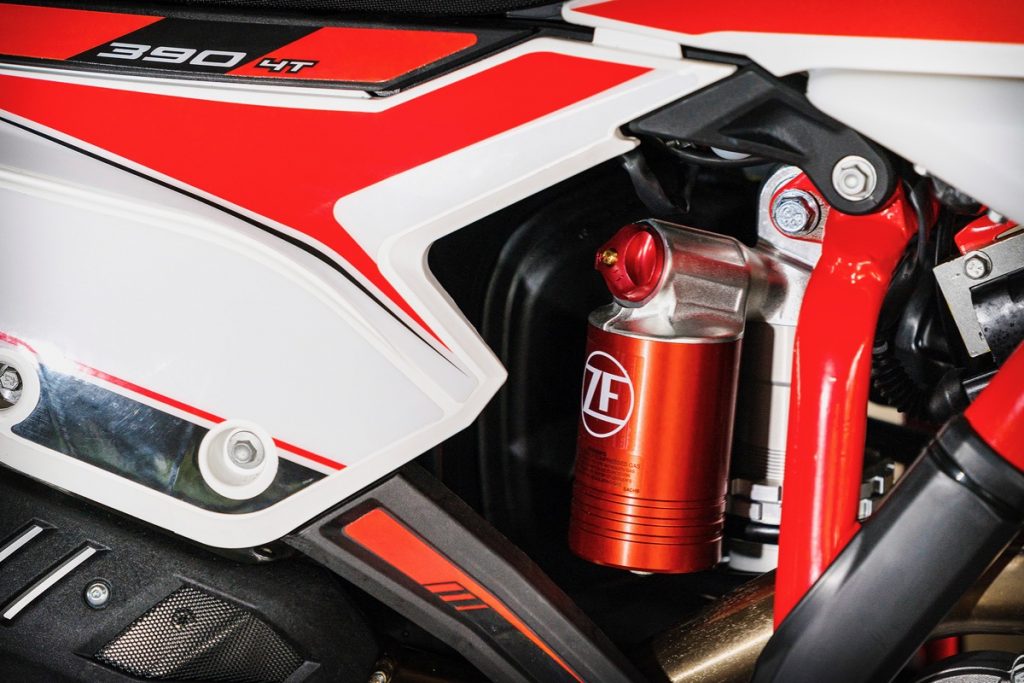 My first thoughts were “damn this engine is so smooth and easy to use”. It’s still a mellow motor but has way more torque than before and it revs faster thanks to its lighter mass. If you have ever ridden a 350 and thought that it needed a little more grunt, then the RR390 could be right up your alley.

The exits of the corners were all blown out and the acceleration bumps were horrid but it didn’t seem to worry the 390 and, with a flick of the clutch, it tracked over them with relative ease. I dropped off the grasstrack section and into the snotty, rocky singletrack, clicked third gear and torqued my way through with no real hassles. I was starting to see why the Beta technicians all like the bike.

It’s not a super-powerful, super-aggressive engine but it seems to just have the right amount of power for just about anywhere on the trail. It loves to be ridden in that third-gear, torquey, meaty part of the powerband. That’s where it shines. The mid-range power of the 390 is where it wants to be and where it does its best work. I think it will do quite well on Aussie trails. 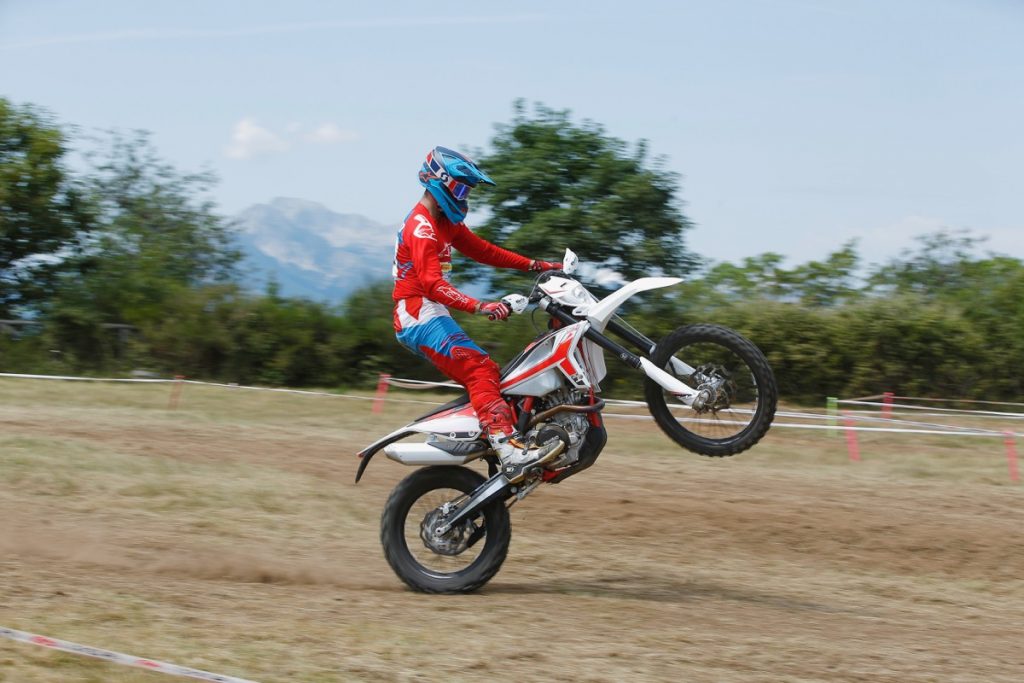 The lap was about 6-8 minutes and was not easy due to the dry conditions and the number of bikes that had ridden it but I found the Beta RR390 to be quite planted. The new motor is very user-friendly and that is great as it appeals to a wide variety of riders.
Even in the slow, techo trails, it didn’t flame out or do anything out of the ordinary.

When we got to the more open parts of the loop, you could give it the berries and it would quickly wake up, click through the gears and pick up the pace.

One thing I would like to try on the 390 is an aftermarket muffler. The stock pipe is nice and quiet but I reckon that an accessory pipe might free the bike up and allow the new engine to breath to its full potential. 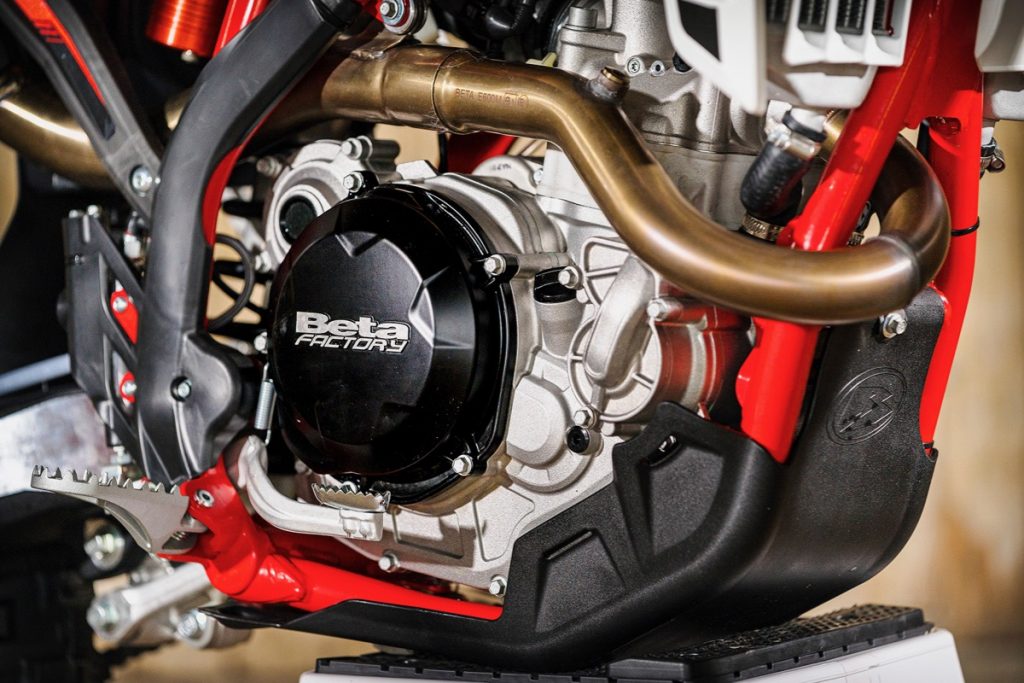 SUSPENSION
Beta has used Sachs suspension for years and, for me, it was always at the softer end of the spectrum. The Sachs gear now carries the branding of German parent company ZF Friedrichshafen AG and there’s been a huge amount of testing and development in order to get the bikes feeling the best they could.

The MY20s have an updated 48mm fork which has an anti-friction coating and has been reworked to suit the lighter chassis and altered centre of gravity.

The trick-looking red ZF shock has also been given some love and receives a new top-out system, longer shock bumper and updated valving to suit the new frame.

Interestingly enough, the four-strokes also have a longer swingarm to give them more stability.

Unfortunately, due to some assembly-line issues at ZF Sachs with wrong oil levels and settings in the forks, the bikes we rode at the launch were on the softer side which didn’t help the bikes on the rough test loop. Sure, I ride at a pro pace and if the track was slow and smooth, the fork would’ve felt plush but upping the pace quickly became a bit scary as the front-end would dive and any confidence you had was lost. 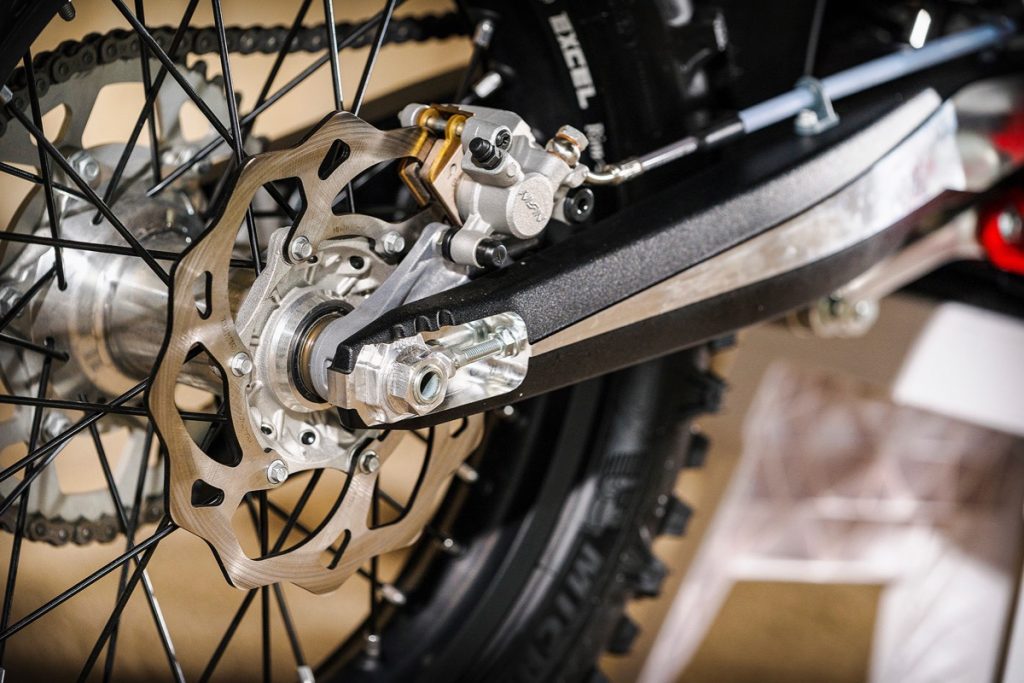 I have been assured that the issue will be resolved before the bikes land on our shores and I hate the fact that a small issue with a fork like this changed the way the bikes felt so much. I have to give credit to the shock for working overtime though. It still got all of the RR390’s power to the ground and carried my jet-lagged body over the bumps with ease.

VERDICT
Personally, there is one thing in particular that I find quite impressive about what Beta has done for the MY20 bikes. The fact that a small Italian company with only 170 employees has designed and manufactured eight new, different-displacement enduros seems crazy to me. They could easily just build one or two but, instead, they are proud that they can offer something for everyone.

The RR390 is a great all-round bike that produces smooth, yet strong power and I reckon it will be a hit among those who want a light four-stroke that won’t wear them out but still has plenty of get up and go under the hood. If you love riding a 350 but want a bit more zip, then the 390 is for you, especially if you wanted to throw a pipe on it. I really enjoyed the engine of this bike.

The new chassis is cumfy and it’ll happily hang out with you all day without getting too wild on the trail. The way that Beta has tackled the redesign with an emphasis on easy maintenance is fantastic for owners as well. And the $13,595 price tag is very competitive with other manufacturers.

Obviously, it is a bummer that there was some issues with the forks at the launch but sometimes these things happen and I guess that means that I have to ride the bikes as soon as they land in Oz with the right kit! The potential is definitely there in the suspension and, from the way the rest of the bike felt, if they get the forks feeling the way they are supposed to, then we could have a title contender in the mid-cap, four-stroke class.

When it’s time for the kids to step up from a minibike to something bigger, are they ready to master changing gears and using a clutch? Kawasaki offers a couple of options with its KLX110 and KLX110L

Suzuki’s DR family includes some of the best-selling dirtbikes in Australia, with the DR650 the most popular machine in the adventure category last year and the DR-Z400 near the top of in trail.