The 2020 Kawasaki KX250 isn't an all-new bike but the parts that have changed are certainly interesting and worth talking about.

There are significant changes in the engine, including a different bore and stroke and a new method of valve actuation. The 2020 Kawasaki KX250 now uses finger followers between the camshaft and valves similar to the design introduced on the MY19 KX450 and used in Kawasaki’s superbikes. 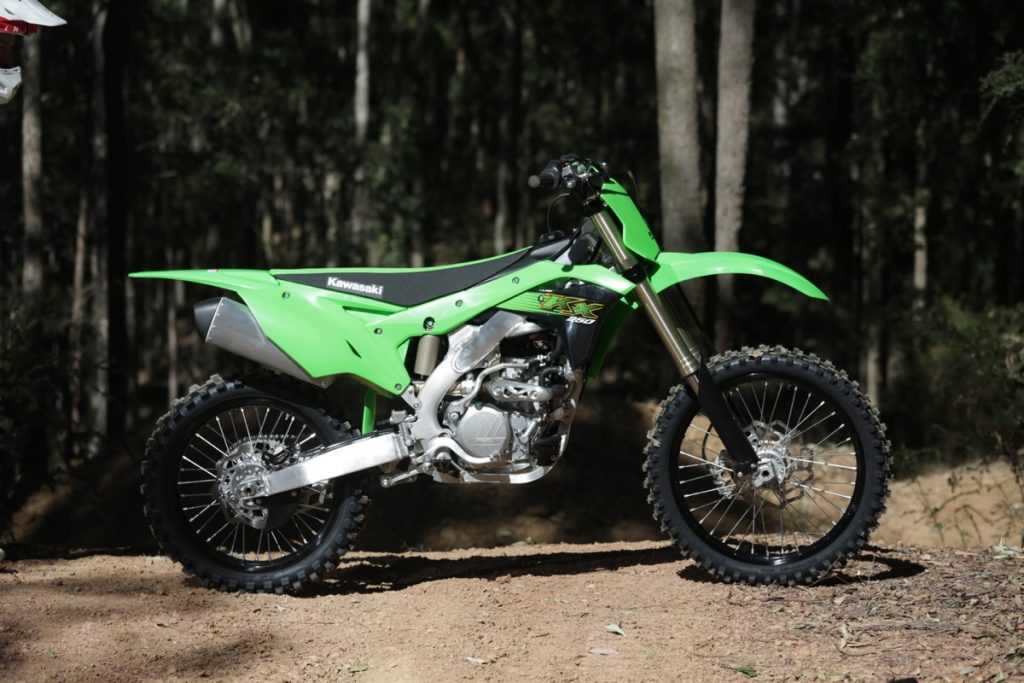 Kawasaki didn’t totally overhaul the rest of the bike but the frame is revised similarly to the 450. The engineers stopped short of fitting the electric starter and hydraulic clutch from the bigger model but they did ditch the Showa SFF2-Air 48mm front-end in favour of a KYB spring-cartridge fork. The bike’s weight is up only 500g.

We took the bright green weapon for a spin around a private test facility in NSW so we could tell you just what we thought about the winningest bike in the AMA 250MX and SX classes. 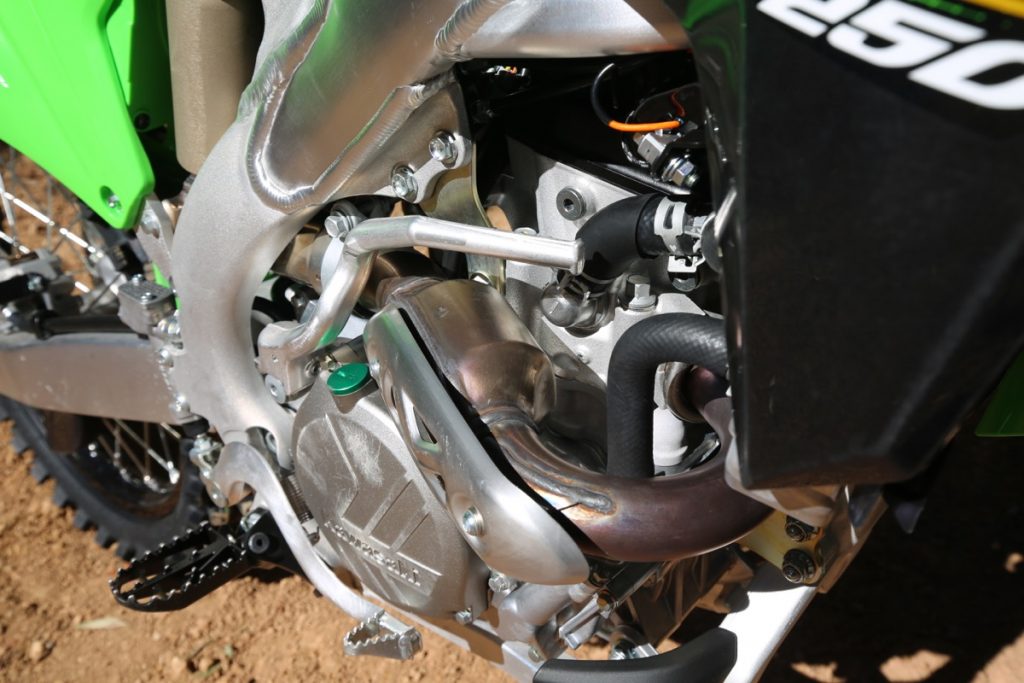 ENGINE ROOM
The most powerful KX250 engine to date comes by way of a bigger bore and shorter stroke, a valve train designed by Kawasaki’s World Superbike engineers and a bridged-box piston straight from the factory racing team. The 1mm larger bore enables the use of larger valves which generate more flow for high-rev power.

The larger piston features a short skirt, reinforced external ribs and the use of a bridged-box design for light weight and strength. The piston’s revised crown helps give a higher compression ratio, while a dry-film lubricant coating on the skirt reduces friction at low revs and helps with the running-in process.

The finger followers increase the rev limit while allowing more aggressive camshaft profiles. They also reduce valve-train mass compared to tappets. A DLC coating on the finger followers helps protect them from wear. The new cams benefit from a thin but durable soft nitride treatment to reduce wear and increase reliability. 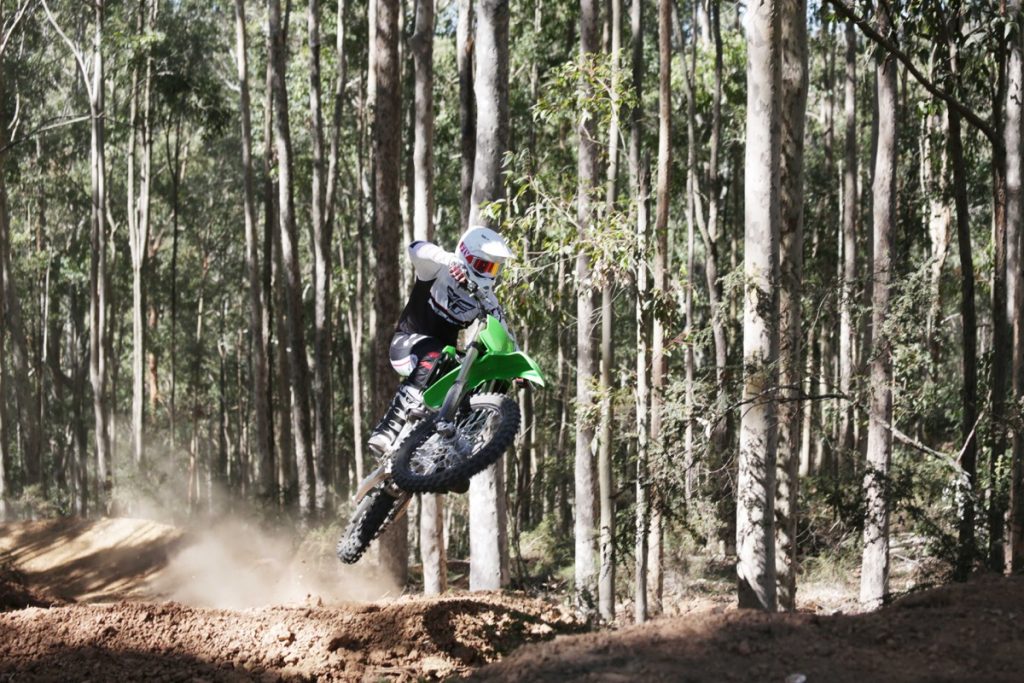 The bigger valves are titanium to reduce reciprocating weight and increase reliability at high revs. The cylinder is offset 3mm forward from the crankshaft to reduce mechanical losses. The camchain is stronger and the tensioner has been moved up to the cylinder head to cope with the increased loads from the more aggressive camshafts and higher revs.
A “plateau honing process” on the bore is claimed to result in a smoother surface with good oil retention while the crank pin has been fitted with low-friction plain bearings to increase service life.

The airbox has been revised and features a shorter, tapered intake funnel. The KX250 remains the only production motocross bike to date with dual injectors, one in the repositioned throttle body and another further back in the air boot which kicks in at high revs. The exhaust system has been shortened and the mid-pipe now features a reverse taper. 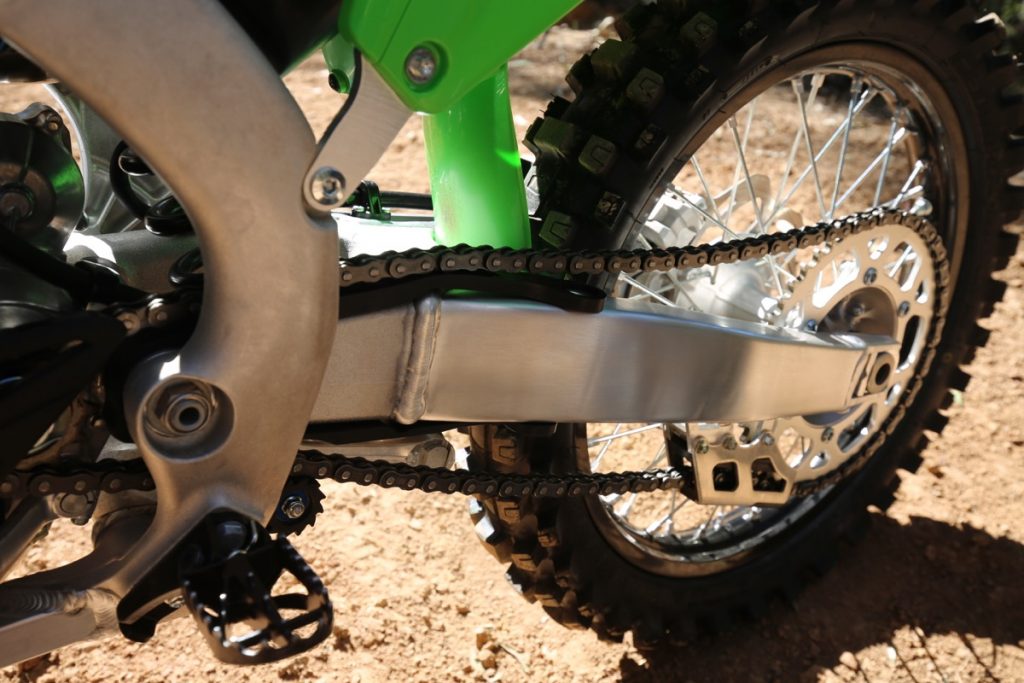 The KX250 really packs a lot of top-end power which is exactly where it wants to be. It wants to be revved and responds best at high rpm.

When the engine is singing you better hang on and get ready to go but at lower revs it lacks some grunt.

To ride this bike properly you need to keep the revs high because that is when it really moves. The rev limit is so high that I was actually nervous at first because I was starting to think it didn’t have one. It took me a good half an hour to get used to revving the bike so hard but once I realized the KX wanted to be revved everywhere I got used to it.

The peak power is strong but I feel like the bottom-end would be much improved by doing away with the stock pipe. It has a skinny header and a restricted silencer. The “hard” (aggressive) EFI coupler improves the bottom-end a lot but I certainly feel like this engine is strong enough to produce solid power right through the rev range with the right exhaust pipe. 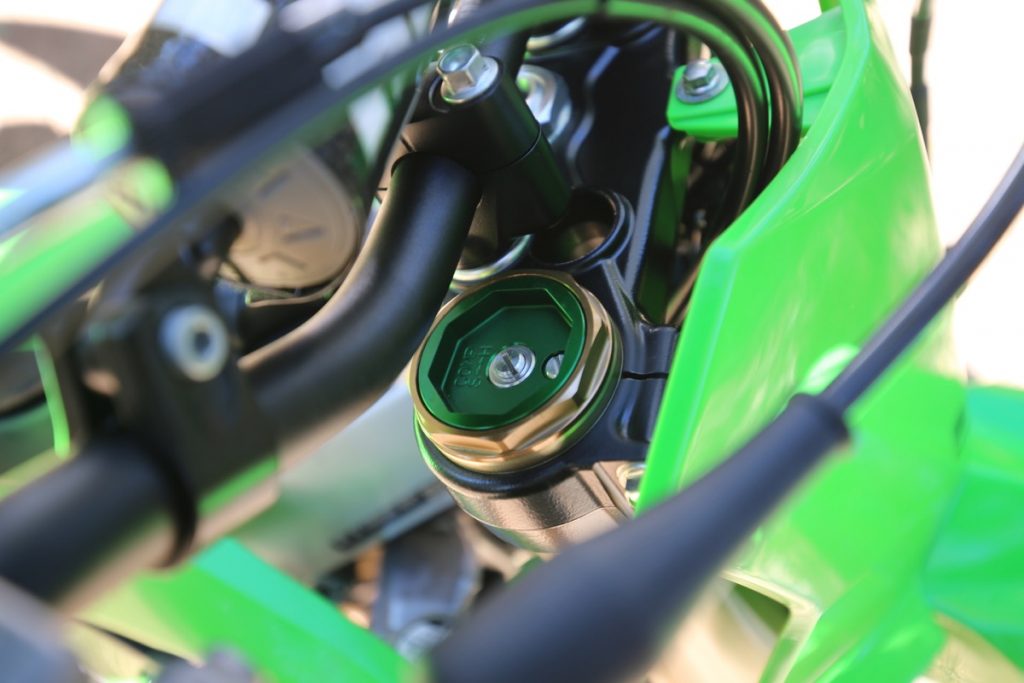 The gearbox and clutch were all smooth and easy to use even though I wish the techs had fitted the hydraulic clutch. To my surprise the engine was very quiet. Typically, engines with finger followers are noisier but the KX250 was not. If you want a fast engine then the KX should definitely be considered. Look out for the KX250 in 2020, there will be more championships with an engine like that.

CARVING TURNS
For MY20, the KX250 has an updated aluminum perimeter frame with new front engine mounts, the KYB spring-cartridge fork and KYB gas-oil monoshock. Kawasaki has retained the four-way adjustable handlebar mounts and two-way adjustable footpegs to suit a variety of riders. Kawasaki set out to make a seamless chassis with slim radiator shrouds and a flat fuel tank/seat design.

Thanks to the new lower-front engine mounts, with short fasteners instead of a through bolt, frame rigidity has been revised. The center of gravity and key dimensions such as swingarm pivot, output sprocket and rear axle locations have all been carefully selected. The fork features large-diameter cartridges, enabling the use of 25mm pistons. A Kashima coating on the fork sliders creates a hard, low-friction surface to help prevent wear.

The KYB shock features high- and low-speed compression damping adjustment while more Kashima coating on the shaft helps reduce friction and wear. A new linkage allows more progressive travel and the spring rates are stiffer at both ends. The KX runs a 270mm Braking disc up front with revised pads. On the rear is a 250mm Braking disc, up 10mm. 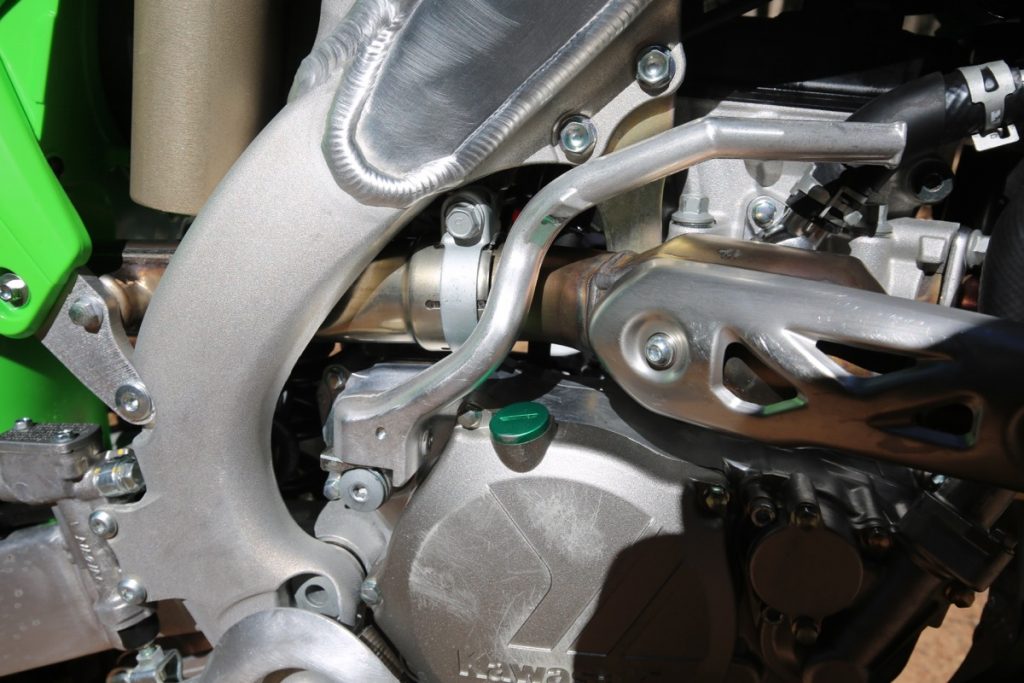 As soon as you throw a leg over the new KX250 you can’t help but feel how compact and tight it is. It feels nimble and is an easy bike to throw around. The seat is flat but with plenty of room and you have no issue in moving around effortlessly. The KYB suspension is magic – so smooth and comfortable to ride on. The stroke is so predictable that it helps you charge into bumps without thinking.

You always know just how the bike will react without any surprises. The fork improves the steering drastically. In the past we have criticised the KX’s Showa air fork for not sitting down in a rut or turn but the new fork has removed that issue. The new suspension is a real winner in my opinion. It has drastically improved a top-level chassis.

The brakes are strong and work well but I would like to have seen a hydraulic clutch thrown in. My only complaint about the chassis was the cheap handlebars and ’grips that Kawasaki keeps fitting. Twenty-two millimetre (7/8 inch) ’bars are not acceptable on a bike designed for top-level racers. The ‘bar feels average and my hands were too wide for the narrow ’grips.

I know the standard excuse that every racer changes their handlebar anyway but we wouldn’t have to if a decent one, with proper ’grips, was fitted in the first place. Other than that, I really only have good things to say about the KX. The chassis works well and even though it feels small I was able to ride it comfortably despite my bigger frame. 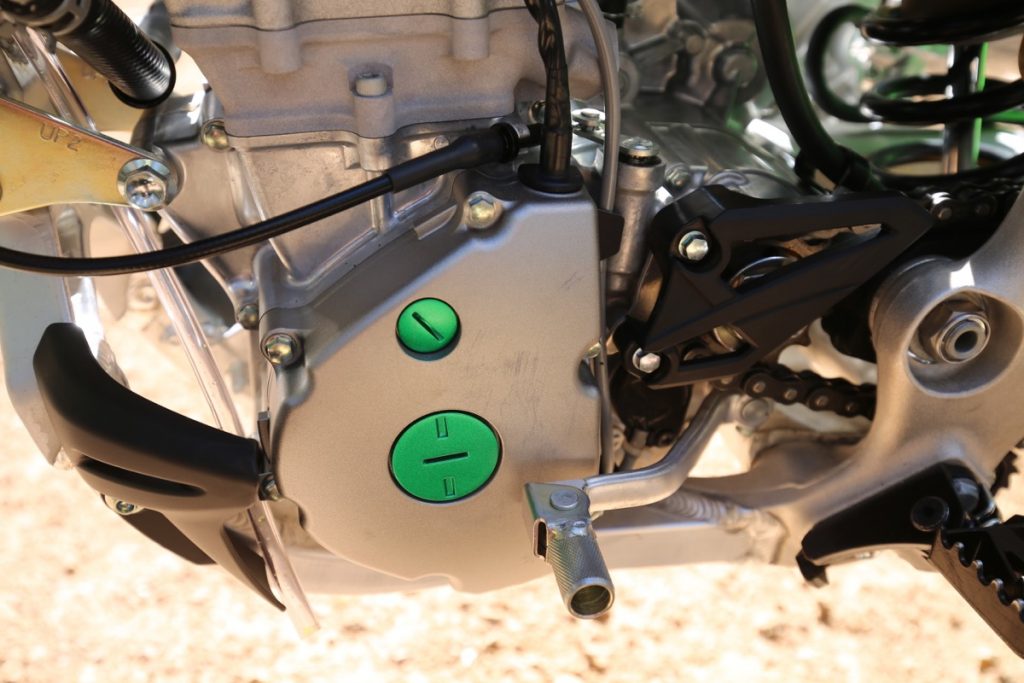 LOOKING GOOD
On the 2020 Kawasaki KX250, the numberplates and airbox have gone green, to give us a look similar to the factory bikes. The overall shape of the plastics creates a sleek and compact looking bike. Adding to the factory race team look is a green oil cap, timing-cover plugs, green suspension adjusters and black rims.

We all stood around having a good gawk at the KX after we rolled it off the back of the ute. The colour scheme of these things is bright green. There is green everywhere you look, there’s no hiding it. It is definitely a bright bike so they’ll have no trouble spotting you from space on a dark night.

At first the colour was somewhat overwhelming but it is definitely a look that seems to grow on you quite quickly. Perhaps more glaring was the fact that Kawasaki has left the mounting boss for the old camchain tensioner in the cylinder and just not machined it. My eyes were constantly drawn to this chunk of aluminium sticking out the back of the cylinder. Obviously that will disappear for 2021 when the electric starter and hydraulic clutch go in, won’t it Kawasaki?

The fuel injection system of the 2020 Kawasaki KX250 features a plug-in coupler that adjusts the engine characteristics. The KX250 comes with three couplers, allowing riders to select pre-programmed maps to suit their riding style or track conditions. The couplers provide maps that are designed for standard, hard or soft terrain.

For riders looking for more, the KX FI Calibration Kit is offered as an accessory and provides full access to the programmable ECU. The handheld device eliminates the need for a trackside laptop and gives riders the ability to create custom maps for adjustment of fuel and ignition. It can store up to seven maps and is PC compatible.

The couplers make a great deal of difference to the power. I preferred the hard terrain setting, which gives a harder, more aggressive map. This map allowed the engine revs to pick up more quickly and the bike would rocket through the rev range and into the meaty part of the powerband.

The soft terrain map really blunted the power output to the point where the engine would accelerate from low revs really slowly. Even in mud I would prefer the aggressive map but I could see a beginner rider really benefiting from the soft map as it tames the bike right down.

The KX FI Calibration kit is a great piece of equipment but I feel like it’s not necessary for a club-level racer, the 2020 Kawasaki KX250 has plenty of grunt for you guys standard. If you were to go fitting exhaust pipes and performing drastic engine work to get the most out of the bike for racing then the kit would be needed to recalibrate the ECU.

The launch control system can be a real advantage but I’ve grown up without using one and have got used to using clutch and throttle control to find traction off the line. Using the launch control tends to take some of that control away so, for grippy start lines, I would prefer not to use it.

If the start is hard, slick dirt or concrete I can see it being an advantage. It just makes it that little easier to get drive rather than the rider getting overly confident on the throttle and spinning up the back wheel. How it works is that the button retards the ignition timing in first and second gear so that the revs don’t rise too quickly, making it easier to get the power to the ground. Once the rider shifts into third, normal ignition timing resumes and full power is restored.