With the 250 SX-F, KTM has taken a bike that was at the top of its game and made it even better with a few carefully targeted tweaks.

No one’s been bagging the existing chrome-moly chassis over the last few years, it’s light and compact, but that didn’t stop the R and D Austrians from having a fiddle. They saw an option to make it better and went for it. Chassis stiffness is a big thing for dirtbike boffins at the moment.

Once they’d finished with that, they needed revised suspension settings to cope with the stiffer chassis. The engine received a new EFI throttle body, exhaust system and battery while a few extra goodies were thrown into the spares kit to make the bike more tunable.

The SX-F comes fitted with a sealed cover over the airbox but, to liven up the power, KTM is now supplying buyers with a vented one in the spares kit so there is no need to break out the holesaw and start cutting holes (Husky MX buyers are getting this too). 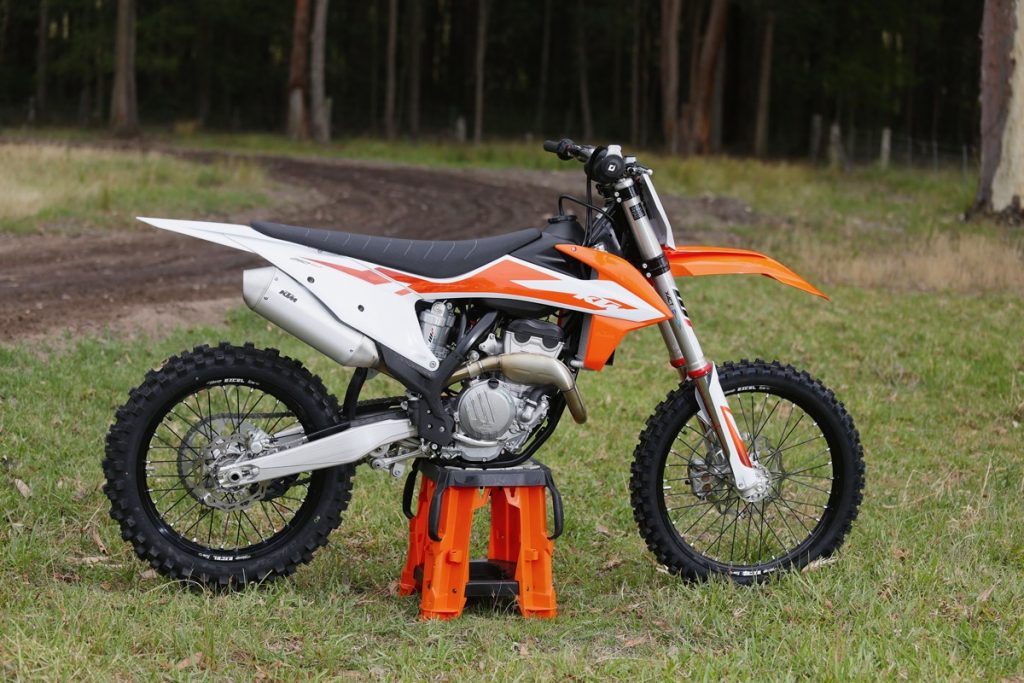 Also hidden in the bottom of the spares kit is a larger throttle cam which makes the throttle pull quicker and more aggressive. This means it takes less twist of the wrist to reach full throttle. These are quite handy additions on a 250cc engine that spends most of its time wide-open anyway. The bike also still comes with a map switch that allows you to select between two programmed engine maps and a traction control function.

The map switch gives the rider the option of the standard map and a more aggressive one, as well as the very gentle map that comes with traction control. The suspension differences are mostly mechanical, with the WP fork receiving a new piston and different settings, both of which are designed to produce smoother movement in the initial part of the stroke. 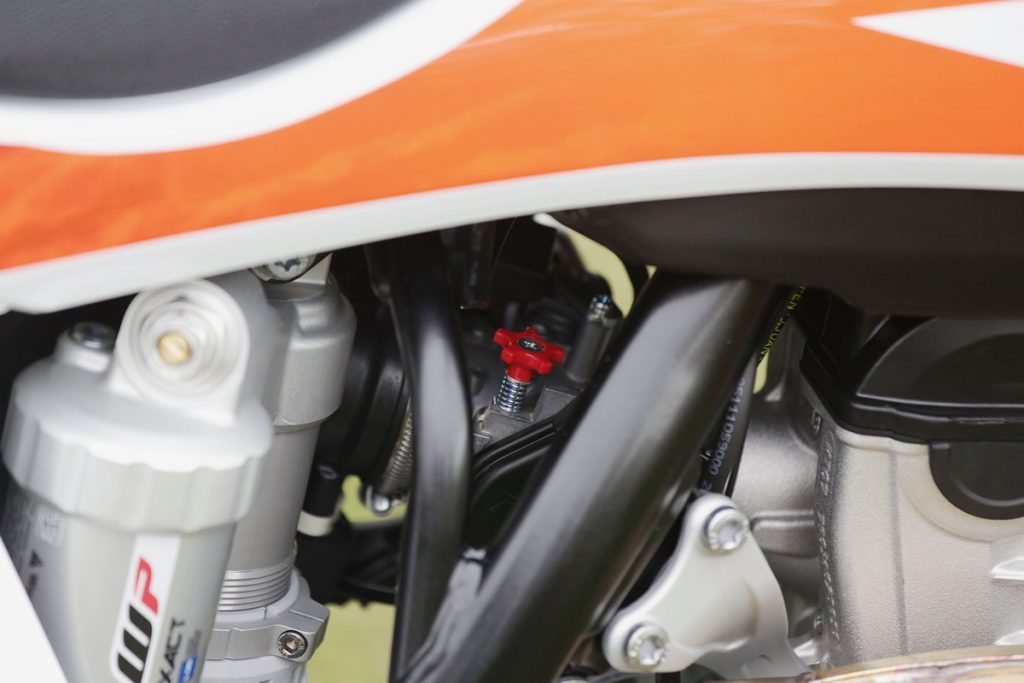 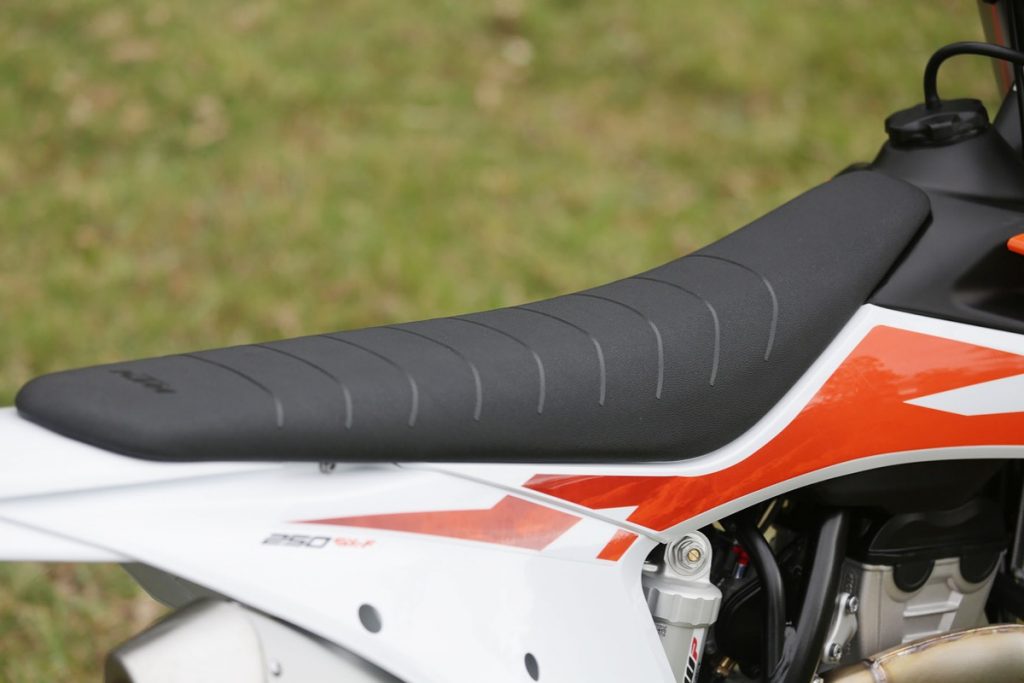 The KTM 250 SX-F engine has always been a class-leading unit in the power department and, with the option of the vented airbox cover, I can’t see that changing. It will be interesting to see how that power compares to the other brands when shootout time comes around.

The handlebar-mounted map and traction control switches are unchanged. Map one has a very linear power delivery from bottom to top and, with the sealed airbox cover it is nice and gentle on the rider. Map two offers slightly more aggression and mid-range power. Pair this map with the vented airbox cover and the aggressive throttle cam and you have an engine with enough power to satisfy pro riders.

I found I spent most of my time in the tight sections in second gear with the engine having enough power to wick up quickly with a little flick of the clutch. The Brembo hydraulic clutch is very impressive. It is smooth and light and has no fade even once the clutch starts to get hot. There is no need to manually adjust a cable either, which is one less job for the rider to worry about.

Third and fourth gear are both well rounded and pull well once you get onto the straights. I actually found third ran longer than expected and shifting into fourth was not needed as regularly … something you don’t get to say very often about a 250. 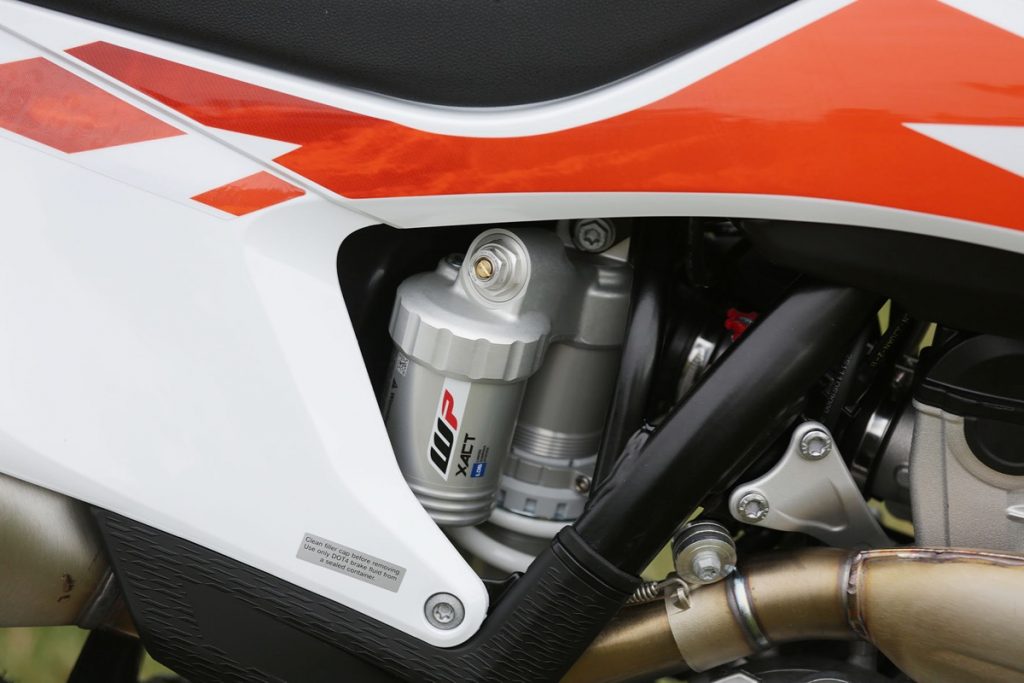 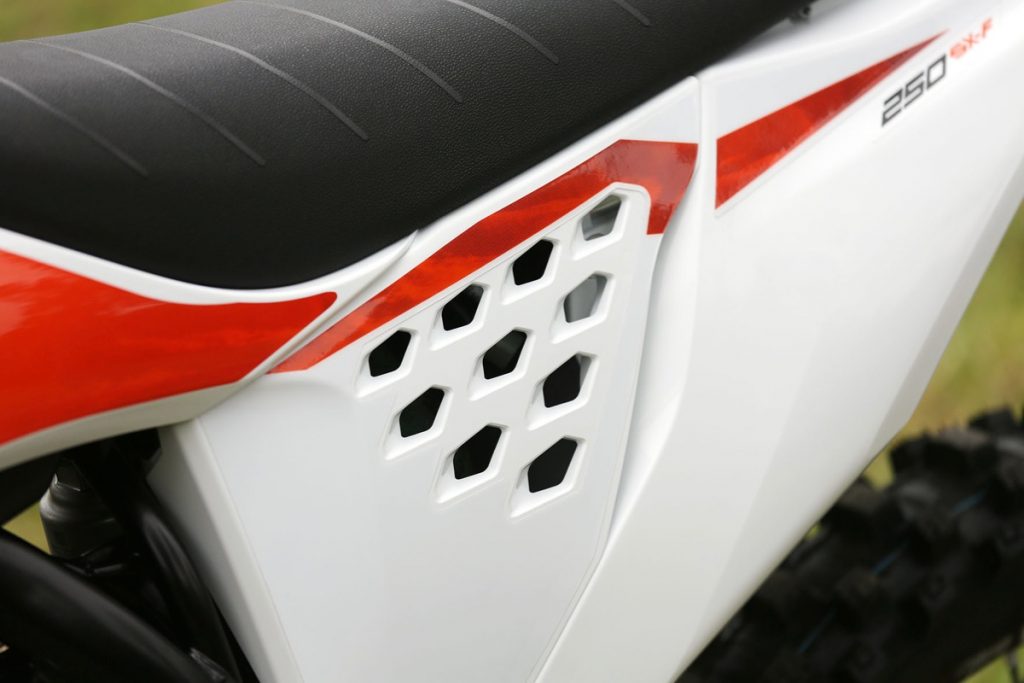 This year’s suspension feels much more rider-friendly in the initial part of the stroke. The old AER 48 fork was criticized for being harsh but we found when testing this year’s bike that when we dropped the pressure down it became much more active over small bumps and the front-end became more predictable. Instead of deflecting off the small square-edged bumps, the fork would soak them up.

I’m 90kg so dropping the pressure meant the front-end would dive too much under brakes so then we spent some time changing air pressures to find a happy medium. If the track started forming up really rough with big whoops and braking bumps then I’m sure the stock pressure would work fine but for a track with lots of square-edged little bumps the front-end just didn’t like that much pressure. But here comes the good part, fixing this issue was as simple as plugging on the WP pump and changing the pressure in a matter of seconds rather than having to pay a suspension tuner hundreds of dollars to change the springs.

Once we got the sag set on the shock it performed very well. The stock spring rate is most likely a rate too light for me but the action was very smooth and forgiving. If the track had big bumps in it then I might have had to slow down the rebound a little or speed up the high-speed compression damping but these are all pretty simple adjustments to a well-rounded shock. 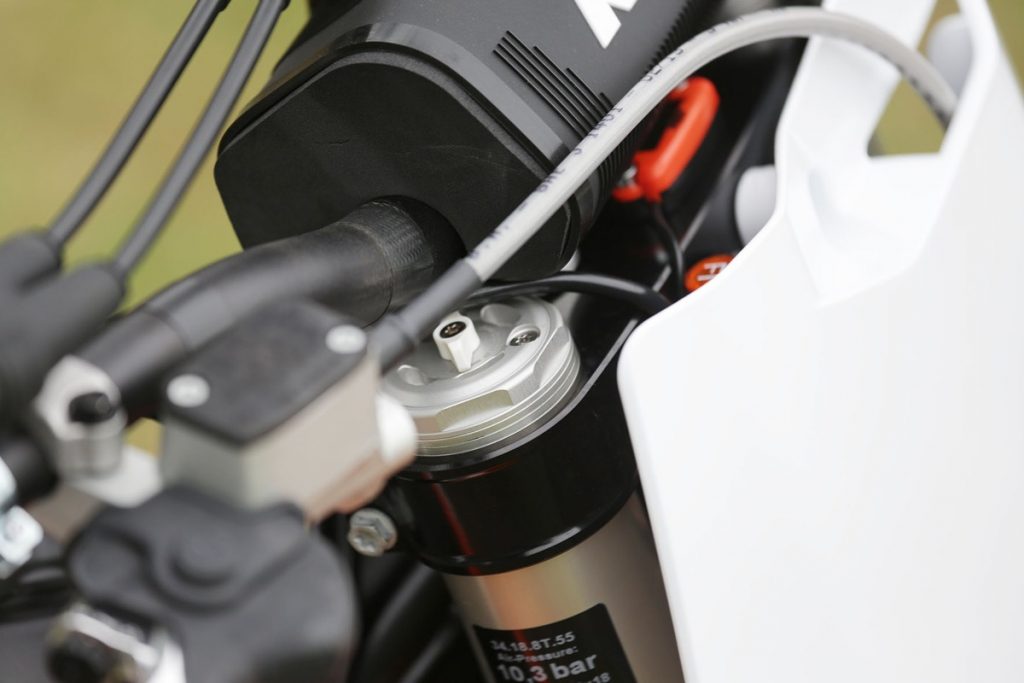 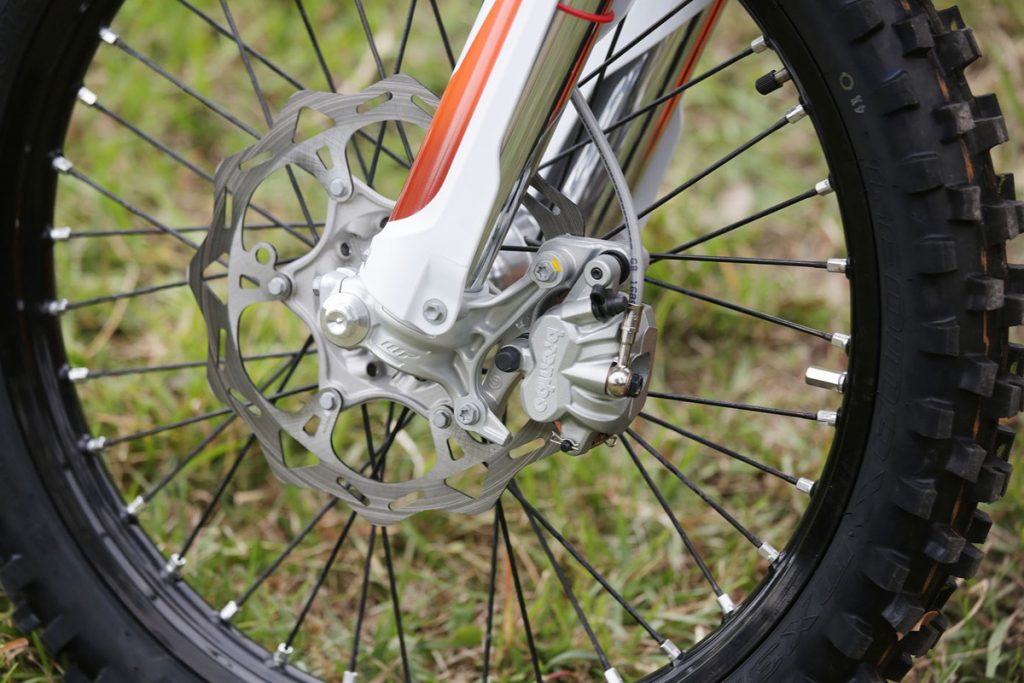 The chassis is very compact, light and easy to handle. As a bigger-framed guy, I find the KTM feels small but the ergos still allow me plenty of room to move around. The bike is easy to flick around and handles all the tight lines really well. The KTM 250 SX-F is slim from the radiator shrouds back to the sideplates so riders not keen on spreading their legs will find the KTM to their liking. The Brembo brakes are powerful and perform just the way we have come to expect. The Neken handlebar is a little rigid and wide and took me some time to get used to but any KTM fan would be familiar with this by now. The seat is flat, comfortable, grippy and doesn’t tear the backside out of my pants. This is a real package that KTM should be proud of.


The fact that KTM wants to dominate the dirtbike industry should be evident enough from them buying first Husaberg, then Husqvarna and now Gas Gas. This alone should be enough to convince anyone that they want to dominate the market, but if you’re still unsure then let me share a conversation I had back in early 2015 with off-road product manager Joachim Sauer.

He told me that KTM simply wouldn’t be happy until they were leading every segment of the market. Their goal is for their bikes to reign supreme. At the time I laughed it off with a bit of a “yeah right, good luck with that” but five years later I’m truly starting to believe these guys aren’t messing around and they won’t stop until they take over the motorcycling world.

It’s all well and good to dream but these guys aren’t just lying around with fancy ideas on paper, they are actually developing industry-leading bikes. How do they do it? Well I believe a big part of their success is the fact that they use a subsidiary company, WP, to not only manufacture their suspension but the frames. These guys literally design everything down to the radiators to all work together as one unit to provide the best performance possible. They are not just welding up a frame and then buying suspension from another supplier to bolt in. They are designing the entire chassis package all in the one place.

This explains why the chassis handles so well, but what about the engine? Well the guys in charge there aren’t slacking off either. They get companies like Pankl to manufacture the highly-stressed engine parts like conrods and gearboxes. Just in case you don’t know, Pankl Racing Systems is a manufacturer of high-performance drive trains that produces parts for Formula One teams that is also Austrian and also owned by KTM’s Stefan Pierer. How’s that for a coincidence? Pair all this with Brembo hydraulics, DDS diaphragm clutches, DLC coated engine parts and you can easily see KTM is not cutting corners.