ADB’s own Olly Malone got to visit Spain for the 2020 KTM enduro launch, but I’m not taking it personally.

As much as us test mules like flying overseas to ride new bikes, I prefer to test them on Australian soil to really experience how they feel.

KTM held its domestic launch near Berrima in the NSW Southern Highlands and while, a lot of the time, distributors just have two loops that we cut laps on, Kato Australia had a big days riding planned, beginning with an 8am start from private property and a transport down the freeway to the Belanglo State Forest.

That morning there’d been a decent drop of rain, so the first three hours of forest trails were a little slippery and muddy but considering how dry the past few months had been I was more than happy to be sliding around in the mud rather than chewing dust. 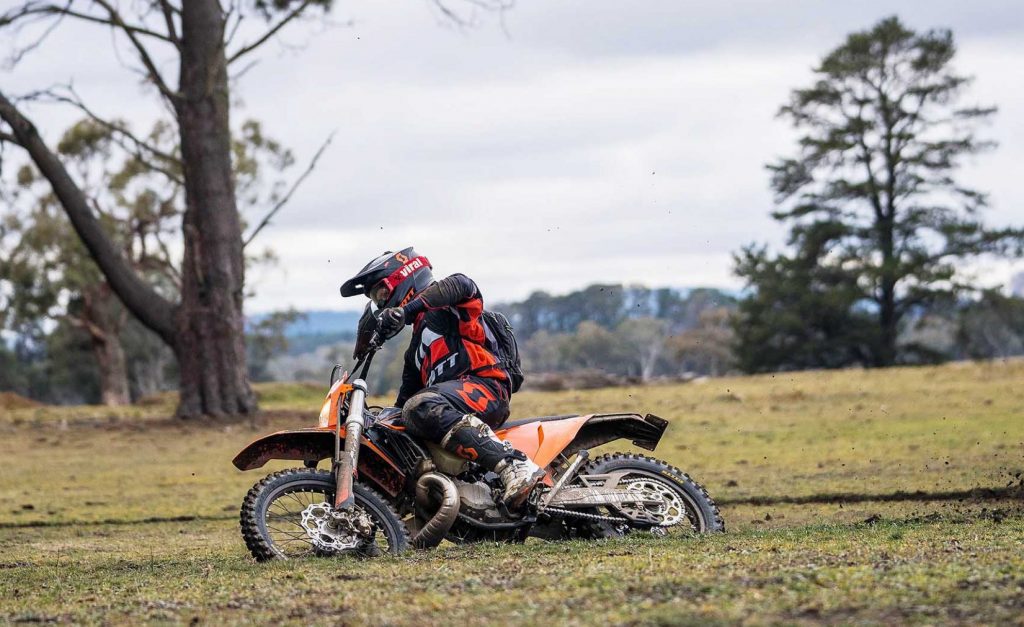 When lunchtime was getting close we started to head back towards Berrima for a feed. On the way, we made a quick detour to a private grasstrack and cut a few hot laps. It was the perfect chance to get the heart rate up and see what the 2020s felt like on a race track.

It only took about two, 20-minute motos to tire us out and have us back on the road for lunch.

After lunch it was back out in a different direction for another three hours of trails. By now the conditions were perfect, as the rain had soaked into the ground, leaving us with dirt you would normally only dream of riding on.

The best part of the day was being able to jump from model to model. There is nothing better than being able to test back-to-back when trying to understand the strengths and weaknesses of different motorcycles. With us riding for the most part of the day, fatigue becomes a factor, so riding the bikes when I was tired was perfect to see how they reacted when I started making mistakes.

The 250 EXC TPI was the perfect bike to handle this period. For 2020, KTM’s engineers have made significant updates to the 250 two-stroke. Suspension wise, KTM has continued to update and refine the WP Xplor fork and PDS shock. 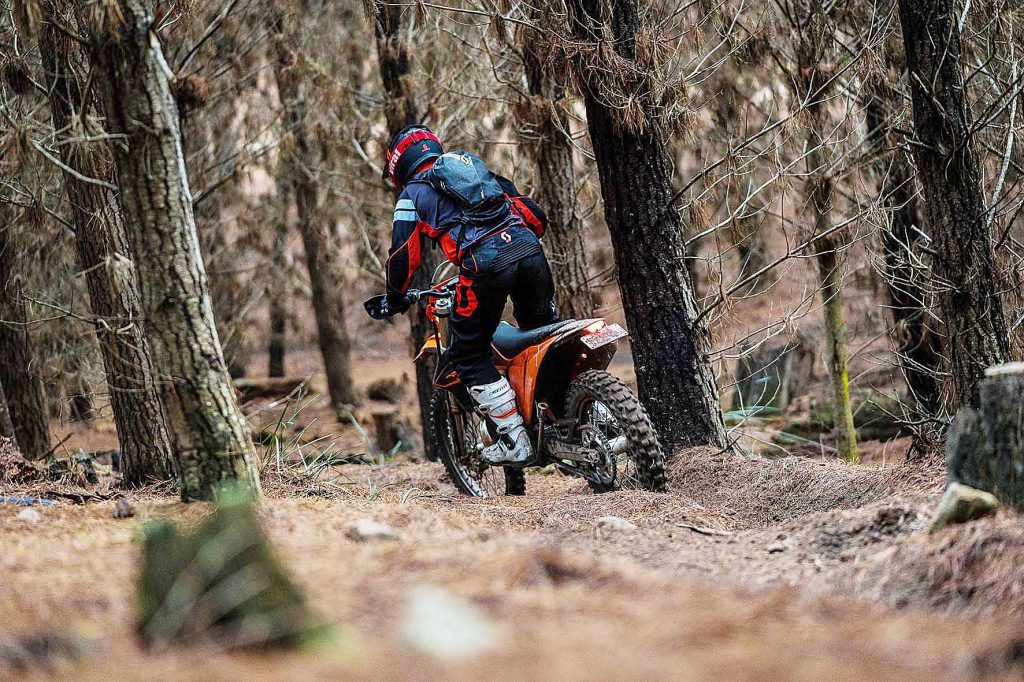 Riding at a good trail pace, the fork felt right at home on rocky, choppy ground as it soaked up everything with ease. I really couldn’t fault its smooth action when trailriding.

The Special Test grasstrack that we rode before lunch was the only place where I felt it was a bit soft and would bottom out on bigger bumps and hits.
firmer

The Xplor shock has a revised secondary piston and cup, with a new shape and seal, which has given the shock a slightly firmer feel. Initially I didn’t think the shock soaked up the small stuff as well as it could, but on the medium-to-big hits, I felt it worked really well and tracked straight as an arrow.

The power delivery is the area I feel KTM has made the biggest gains. I have spent a decent amount of time riding the previous two 250 EXC TPI models and, to be honest, I did not like the 2018 as it felt under-powered and not suited to racing, especially when compared to the carburettor version.

I remember thinking KTM had killed the two-stroke but when I tested the 2019 I gained hope as some of the power had returned. When I rode the bike on technical terrain it felt amazing. Even with the improvements KTM made for 2019, I still did not find it powerful enough for open terrain and could not see many racers wanting to jump on one for our fast Aussie racing conditions. 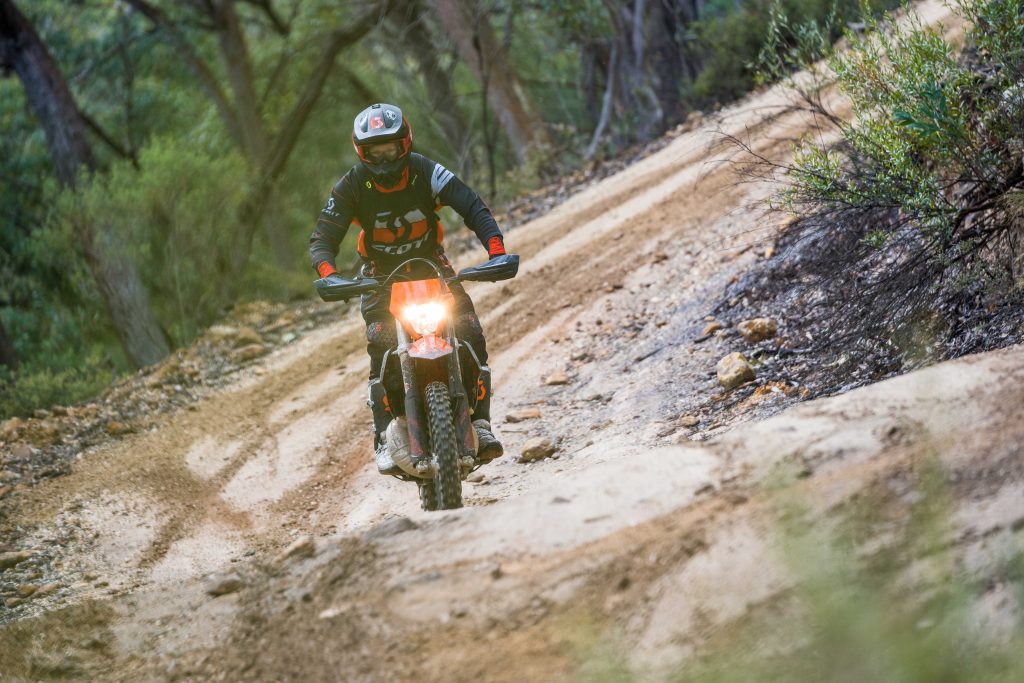 But for the 2020 TPI models, KTM’s engineers claimed to have made massive gains in the way the engine produced its power, as a result of adding an ambient pressure sensor to feed the ECU more information for it to adjust air/fuel ratios.

I don’t generally swallow all the claims engineers make with new models but it was pretty evident from my first ride of the 2020 250 EXC TPI that they weren’t lying. With the ambient pressure sensor added, the power feels stronger everywhere while being smoother than ever and very usable. Overall, performance was greatly improved on open terrain, while still feeling right at home in techo conditions.

Visually, one of the biggest changes is the rippled expansion chamber. It’s made in-house using 3D stamping to give the shell a corrugated surface. This makes the exposed chamber more rigid and resistant to impacts while reducing noise due to vibration.

It now has an oval cross-section for reduced width.

STRENGTHS
I kept an eye on all the two-stroke pipes during the launch and, even after some decent crashes on the slippery morning terrain, all of them were dent-free.
KTM has re-designed the radiators and mounted them 12mm lower. I know this doesn’t sound like much but it does give the bike a lighter feel, especially when flipping side to side between trees. I really noticed this a lot.

For riders who are struggling to pick between the 250 and 300 here is what I found. The 250 EXC TPI may officially weigh the same as the 300, at 103.4kg, but on the trails it feels noticeably lighter with that 66.4mm piston thrashing around. It also feels easier to bring to a quick stop when rushing into a corner too fast. I put this down to the reduced engine inertia generated by the smaller engine.

Early in the morning on the slippery terrain, it was also easier to find rear wheel traction. The 250’s power comes on slightly less abruptly than the 300’s, meaning it didn’t break traction nearly as quick.

Mid-range power is where the 250 really starts to distinguish itself from the 300 as it really comes alive, producing power that makes you wanna find logs and obstacles to jump off. The top-end power is excellent as it keeps revving while also producing power. It even sounds happy while being held wide open. By comparison, the 300 signs off early and doesn’t sound nearly as happy being revved hard. 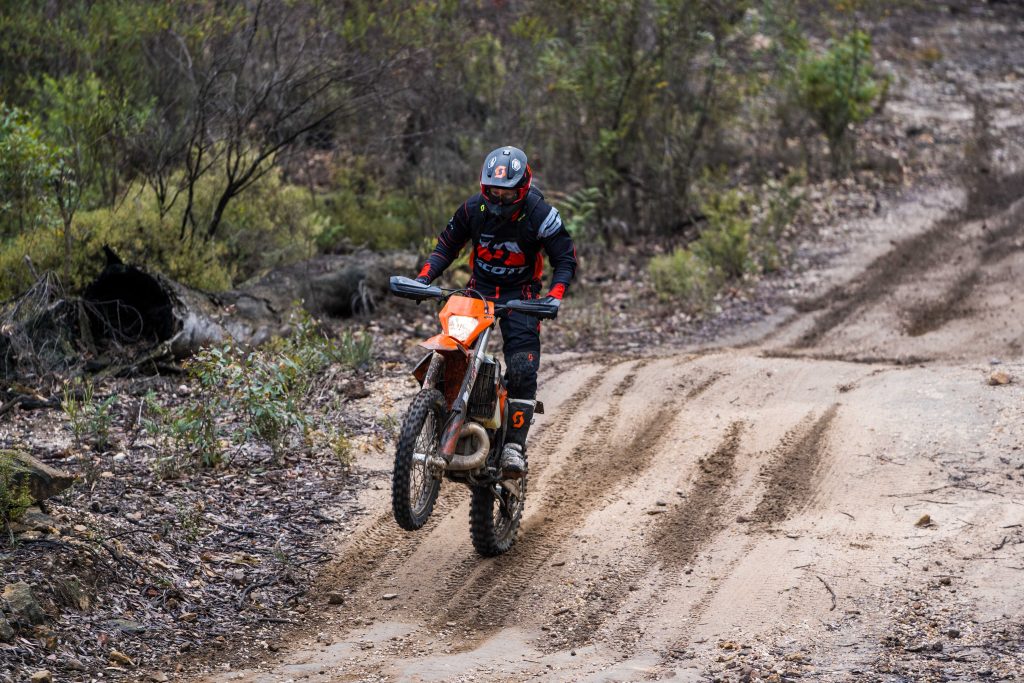 Riders who don’t want to be worn out with arm-wrenching bottom-end, but want something that comes to life in the mid-to-top-end, should look no further than the 250.

Both the 250 and 300 got new frames in which the engine is rotated forwards by one degree to weight the front and both bikes did have great front-wheel grip, but I found the 250 turned into corners with less effort. At the end of the day when fatigue was playing its part, the 250 was noticeably easier to keep under control. I could get away with being a bit wild on the throttle and still stay onboard. As the 250 produces a lighter, more lively riding experience than the 300 it was exciting and fun to operate. I did notice the majority of the testers getting off the 250 with a big smile. Another great reason to go with the 250 is you will pick one up for $1300 less.

WHY NOT A 250?
As impressive as the new 250 EXC TPI is, there are still a few reasons why I’d lean towards a 300. First up, if I was just into extreme enduro riding, the 250 doesn’t have the low-end torque that the 300 does. Meaning if you were out on extreme hills all the time you would get sick of revving and slipping the clutch on the 250, when you could be chugging along on the 300.

For the two-stroke riders out there who like to put their bikes in third and basically ride all day without a gearchange, maybe you should stay on a 300. The 250 does make great power but needs a lot more rowing.

The overall ride experience on the 250 is definitely more lively than the 300 and this can unsettle you and make riding difficult for the kind of riders I have come across who have to ride two-strokes but want them to feel as close to a four-stroke as possible.