The 2020 Sherco 250SE-R Racing has not seen major changes but there have been enough to give it a new feel on the track. The shock linkage has reduced friction aimed at producing a more comfortable ride and new sealings for increased durability.

Feeding the Keihin PWK36 carburettor is a new inlet boot from the airbox to improve torque and provide a better route for the wiring harness. The reed valve has also changed for better air-flow, which required mods to the reed-valve housing in the barrel. 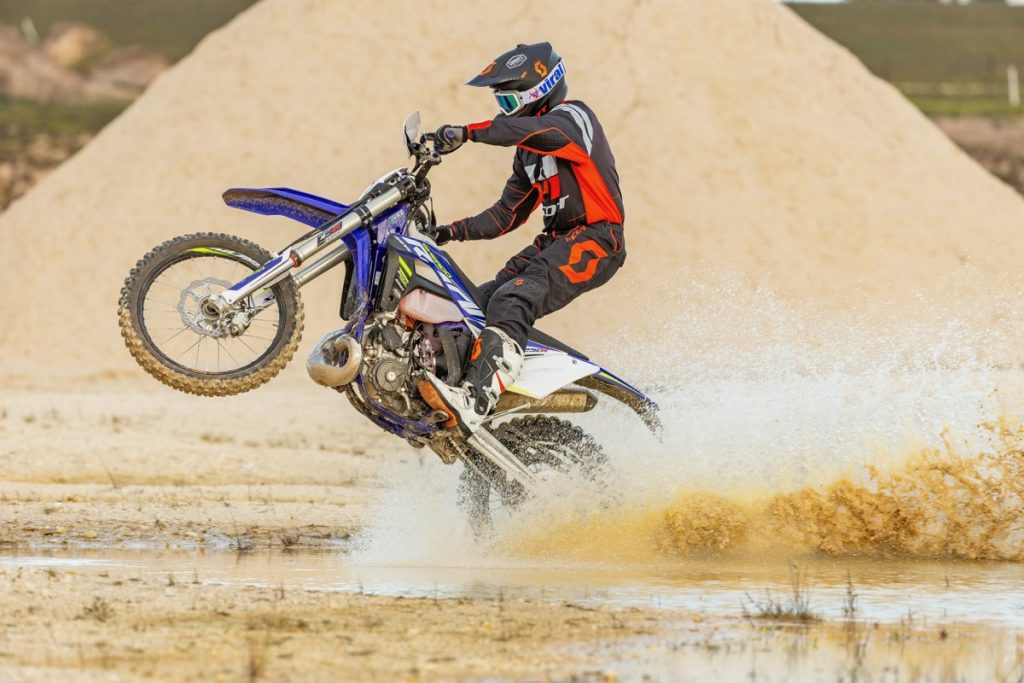 The shape of the translucent plastic tank has been modified for easier access to the fuel tap.

There is, of course, new graphics and new manganese-coloured paint for the clutch and alternator covers, as well as the cylinder head. The clutch itself gets the forged hub from the four-strokes which is lighter and will spin up more quickly.

Now the Sherco 250SE-R Racing is mainly blue it’s easily my favourite. There’s no back-up kickstarter but it doesn’t sound like it needs one either, as it fires into life super-fast with a touch of the starter button.

Our test venue, Krusic’s Ride Park in Gippsland, Vic, has a decent mix of terrain and the enduro track starts with some decent, knee-high bumps along a fast straight. I was actually surprised how well the WP Xplor fork and WP monoshock handled the bumps. Because the suspension felt quite soft when riding around slowly, I wasn’t sure how it would go on the big bumps.

The fork did bottom a few times but nothing bad enough to make me wanna back off. The shock was easily the standout in the suspension department, the new linkage really has improved the action of the shock, to the point where I could not fault it over any section of our test loop. 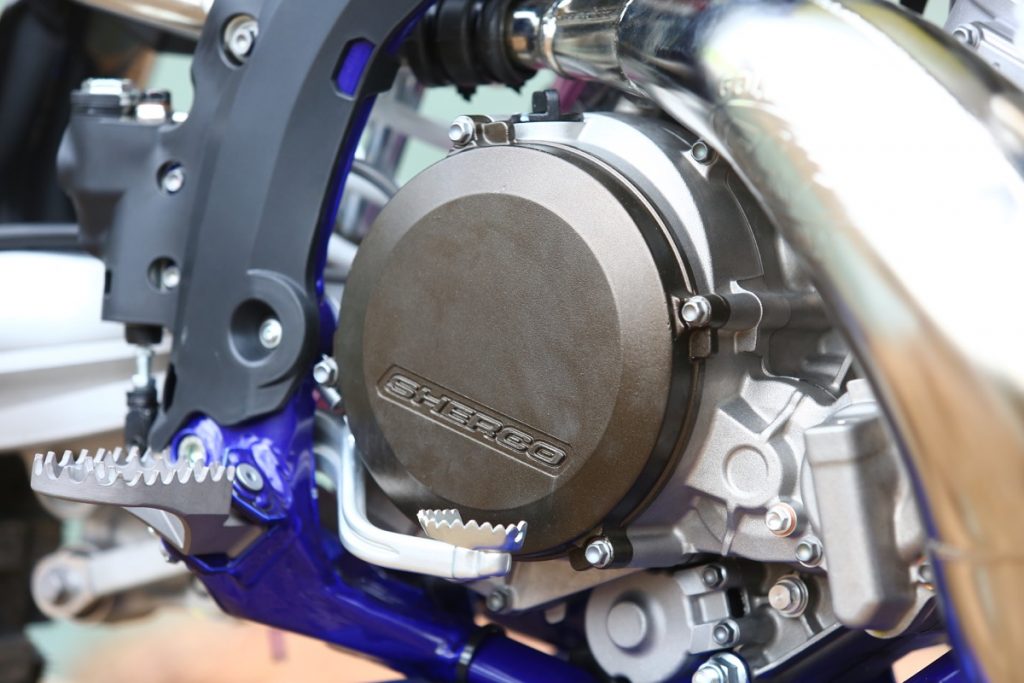 SPECIAL ENGINE
The seat sure is not the tallest I’ve seen but it’s not the lowest either. it pretty much feels in the middle and didn’t make technical sections too daunting when I needed to get my feet on the ground. The heart of this bike, the carburettor-fed 250T, is really something special. It had me feeling like I was 19 again.

The changes Sherco has made to the intake and reeds have really brought this engine to its sweet spot. It can lug well enough to rival 300s but, if you do wanna ride it like a teenager, it loves that as well and is much happier than a 300 being full throttle all day.

There is also the option of the map switch that I have always been a fan of on the Shercos as it has the ability to cut the power by a large amount, which is great for a fatigued body or when trying to find traction on slippery terrain. As this two-stroke engine has bugger-all engine inertia, the Brembo brakes come in handy and give me the feeling I can stop anywhere, anytime.

The minimal inertia and nice neutral chassis also makes turning effortless. Front-end feel is important to me, so I was a happy boy when the front wheel went everywhere I wanted it to. I really think riders are missing out if they go straight to a 300T without testing a 250 first. I had an absolute ball on this new 250SE-R. 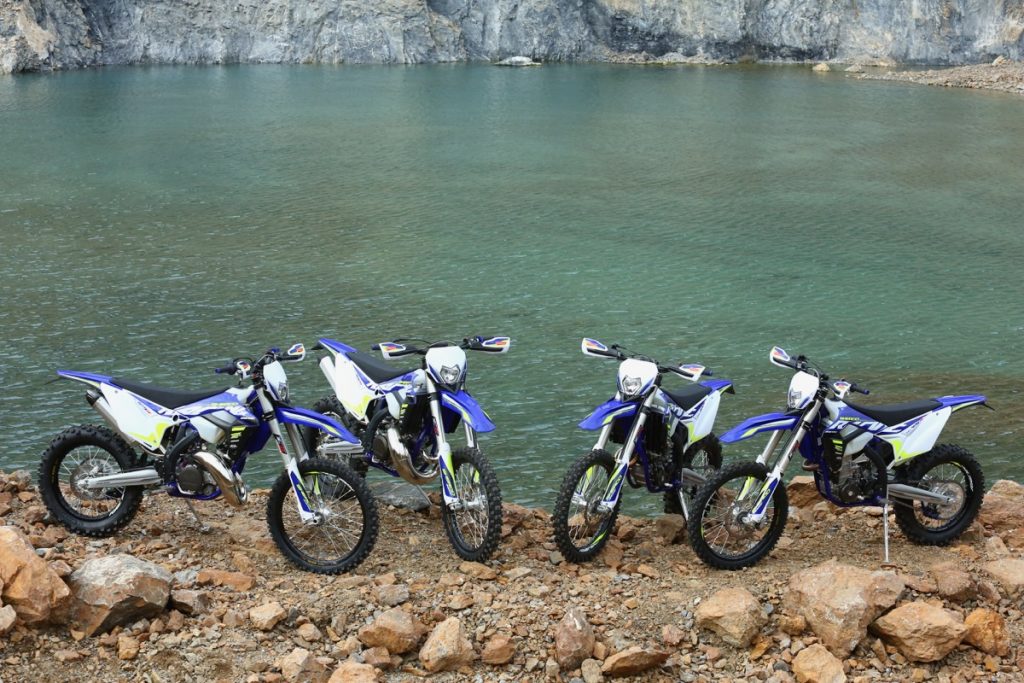 WHO’S THE Sherco 250SE-R Racing SUIT?
This 250cc is nothing like some of the snappy, hard-to-ride 250Ts of years gone by. The electronic-power-valved engine, combined with plush WP suspension, really is one versatile package.

I have spent a decent amount of time riding 300Ts lately and I can say 90 per cent of riders I see would be better off on this 250. They would last longer, smile bigger and find twisting the throttle that bit safer as well.

Unless you are a top-30 guy racing national off-road, I would also say this Racing model with the softer WP suspension would be the better option. Yes the Factory model has high-end KYB suspension but this light bike, combined with the WP gear really works well and imagine what you could do with the $2000 you save when going with the Racing instead of the Factory. This little smoker also comes in the cheapest in its class at $12,290 and, when every dollar makes a difference these days, the Sherco really is a great option.

WHAT WOULD I CHANGE
There is not much at all I would change on this bike. The only real part that is a must for me would be the handlebar, as the standard one is really low. I don’t mind a low ’bar but this one has a bit of a different bend. If I was only ever riding a Sherco I would get used to it but when I’m always riding different bikes, I’d have to switch it out to something slightly taller with a more neutral sweep.

While I was in the process of changing the handlebar, I’d change the handgrips too as the standard ones look cool but, unless you are a full-time racer or bricky they will eat your hands.