The Suzuki RM-Z250 has long had a reputation for being an agile and easy-to-ride machine.

For MY19 the Suzuki RM-Z250 got a complete make-over that included major chassis changes, radical plastics, huge upgrades to the engine and a switch to the proven KYB 48mm spring-cartridge fork in place of the unpopular PSF2 air fork.

The bike was a massive improvement over the 2018 that brought it back in line with the RM-Z450 and within striking range of the class-leading 250F motocrossers. For MY20, the RM-Z250 remains relatively unchanged other than a small update to the graphics and the addition of Wifi tuning. So, while mass changes may not be the reasons it takes a shootout win in 2020, the addition of WiFi tuning and some small tweaks can turn it into a championship winner.

When I reviewed the 2019 Suzuki RM-Z250 last February, I listed my favourite six features of the bike, which were the motor, ergonomics, fork, holeshot assist (S-HAC), KYB shock and Nissin brakes. The engine was a huge improvement, thanks to a downdraft intake system and new Mikuni fuel injection unit with twin injectors which resulted in big power gains in the bottom-end, mid-range and, particularly, top-end. 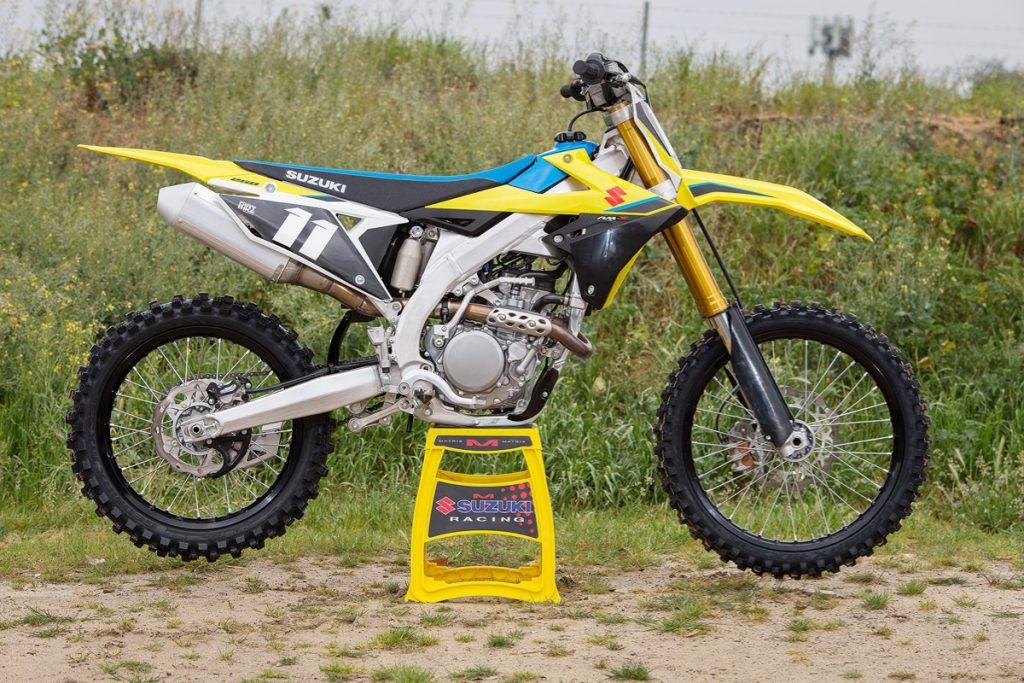 The ergonomics were a huge plus for me, with the MY19 feeling a lot slimmer, especially while standing, but the flatter profile of the seat was the biggest game changer for me. This allowed you to move forwards and backwards in corners with ease depending on whether you wanted to weight the front of the bike or the rear.

The spring-cartridge fork was an improvement but needed some slight internal changes to the valving to soften a harsh, mid-stroke spike that was apparent under brakes. The S-HAC system was a cool addition and really helped you rocket out of the start gate while the 270mm front disc rotor (up from 250mm) dramatically improved braking into the first corner.

While the Suzuki hasn’t changed much for 2020, the playing field certainly has moved a bit so let’s see where the yellow machine sits in the big scheme of things as we wait for the other players to land. 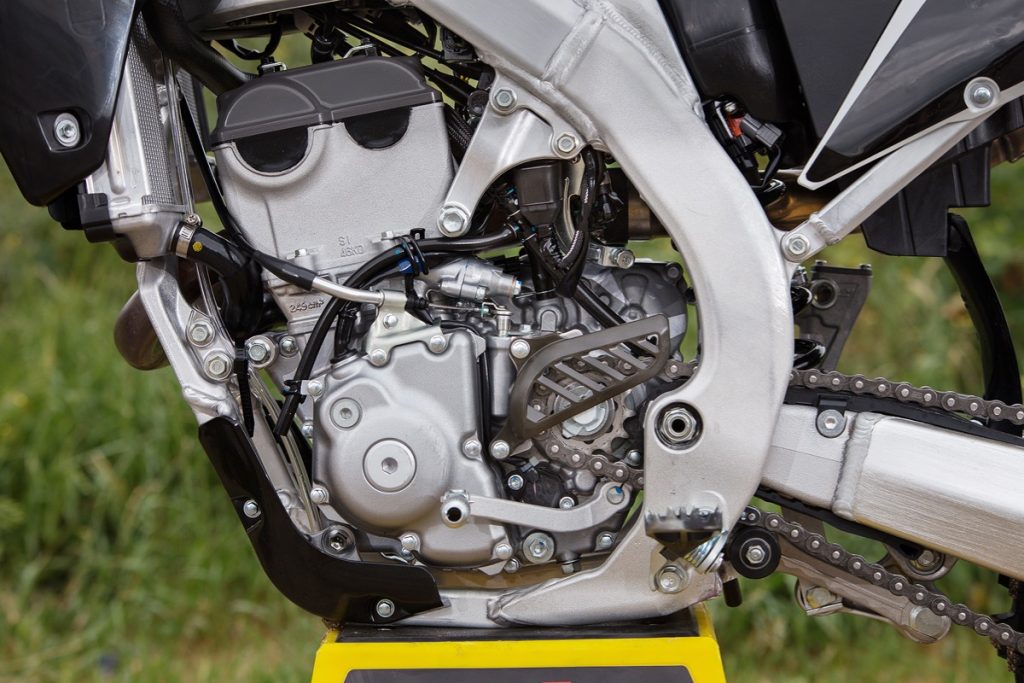 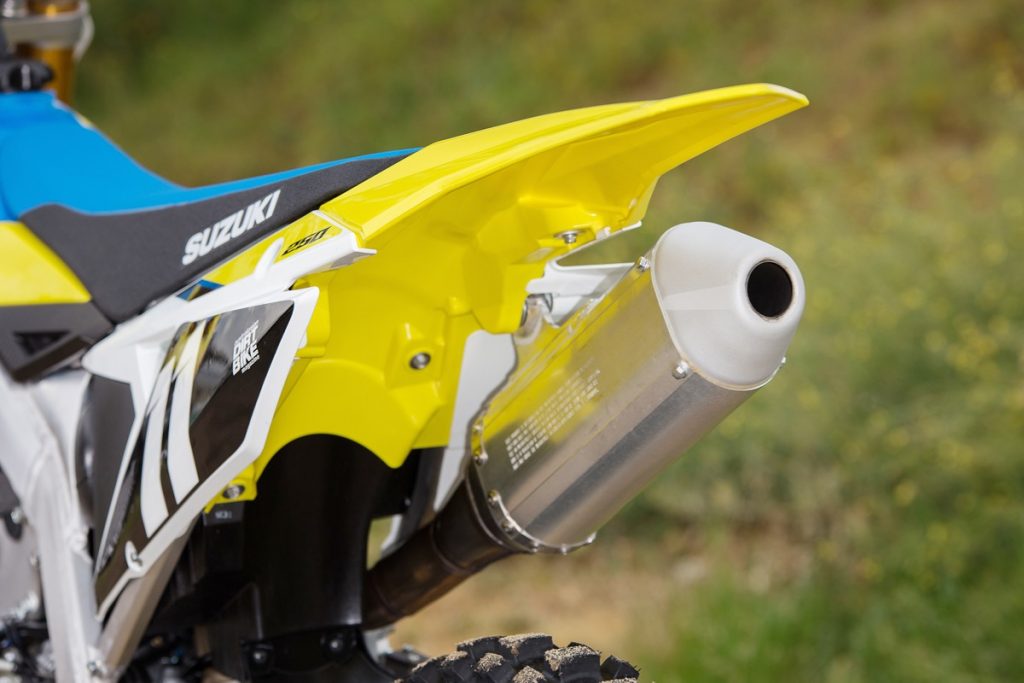 SUSPENSION
Suzuki has opted for a firm platform on both its 250cc and 450cc bikes in recent years and that remains the case for the latest Suzuki RM-Z250. The bike holds up exceptionally well on the big hits, including both jumps and those huge G-outs that you come across from time to time on hilly tracks.

In fact, the firm suspension is almost more suited to an arenacross or supercross track in the way it holds up in the stroke. Even with my 82kg on board, the suspension held up quite nicely, to the point where the harder I charged into jumps the better the bike would react.

Lighter riders in the range of 60 to 70kg will need to not only look at changing the spring rates front and back but also to get their favourite suspension guru to work on the valving. Once the track roughens up a bit there are a few tendencies that start to show up on the RM-Z. 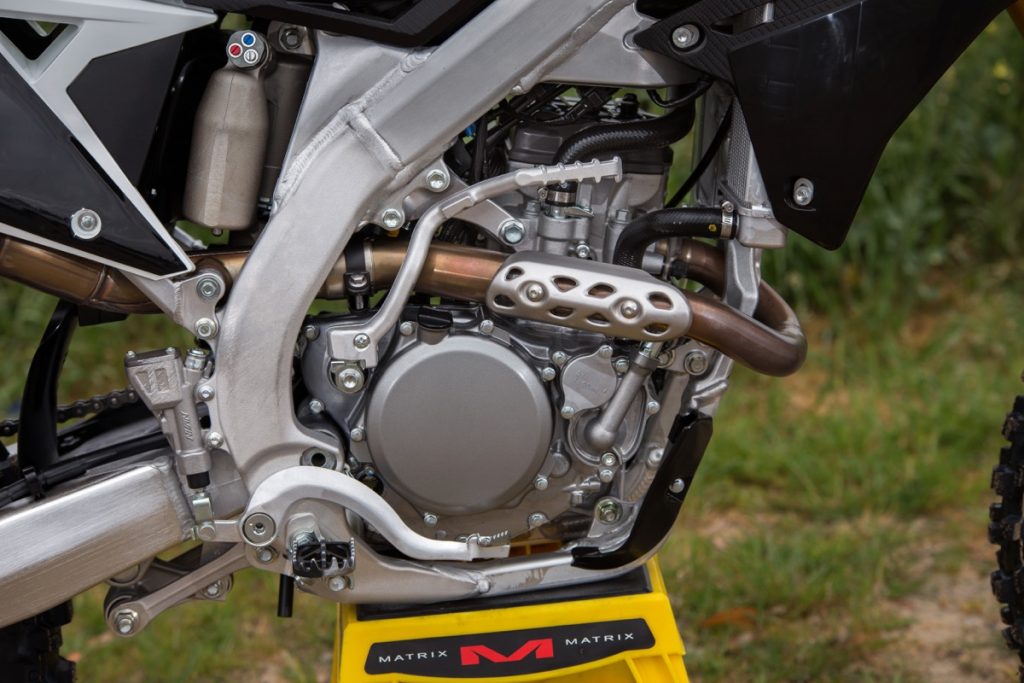 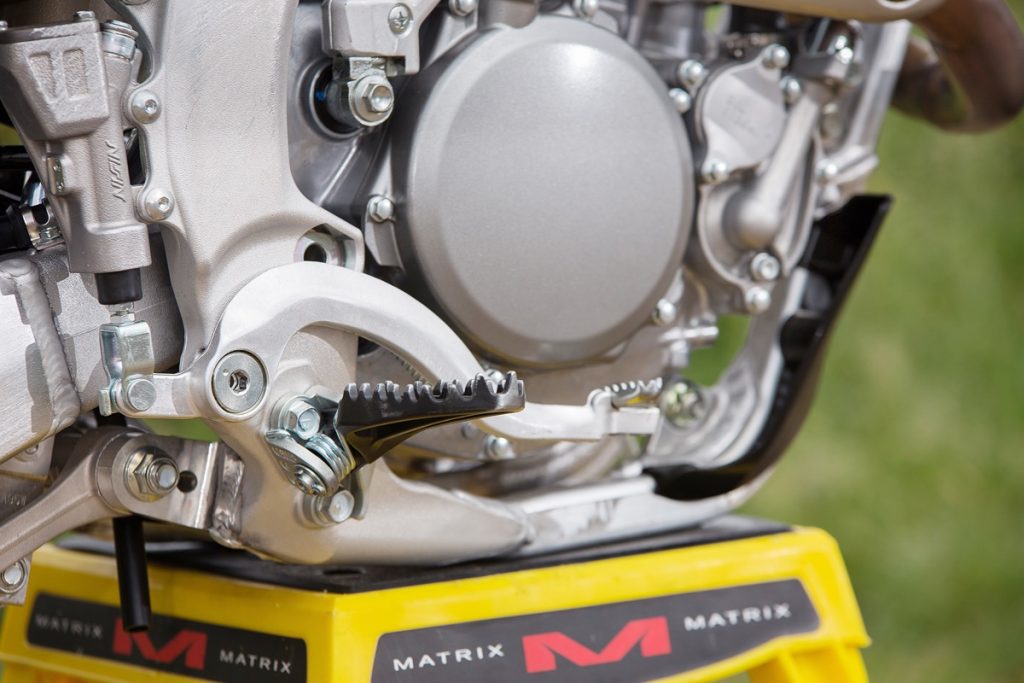 I must say that, balance wise, the Suzuki isn’t overly biased to the front or the rear. The Suzuki RM-Z250 doesn’t dive in the front under brakes and it doesn’t squat excessively under acceleration. But there is still a slight harsh spot in the mid-stroke that is evident both in the fork and shock.

And you can spend a lot of time playing with your compression and rebound clickers to try to iron out that spike. Yes, you may get it slightly better with a lot of mucking around but it will still be a work in progress. We will get into the chassis details in a minute but, due to the fact that the characteristics of the suspension are hugely influenced by the chassis on a dirtbike, it is important to mention here that the rigid chassis really does need plush suspension to balance it out.

The firm KYB package combined with the rigid chassis provides an aggressive and slightly unyielding ride once the track gets rough. And, without a doubt, the Suzuki needs to be ridden at 100 per cent if you want to get the most out of it. Don’t fall into the trap of reducing the preload on the rear too much in an attempt to soften the ride as you will only drop the shock into a harsh part of the stroke and that will make things worse. See the breakout for the settings that I ended up with. 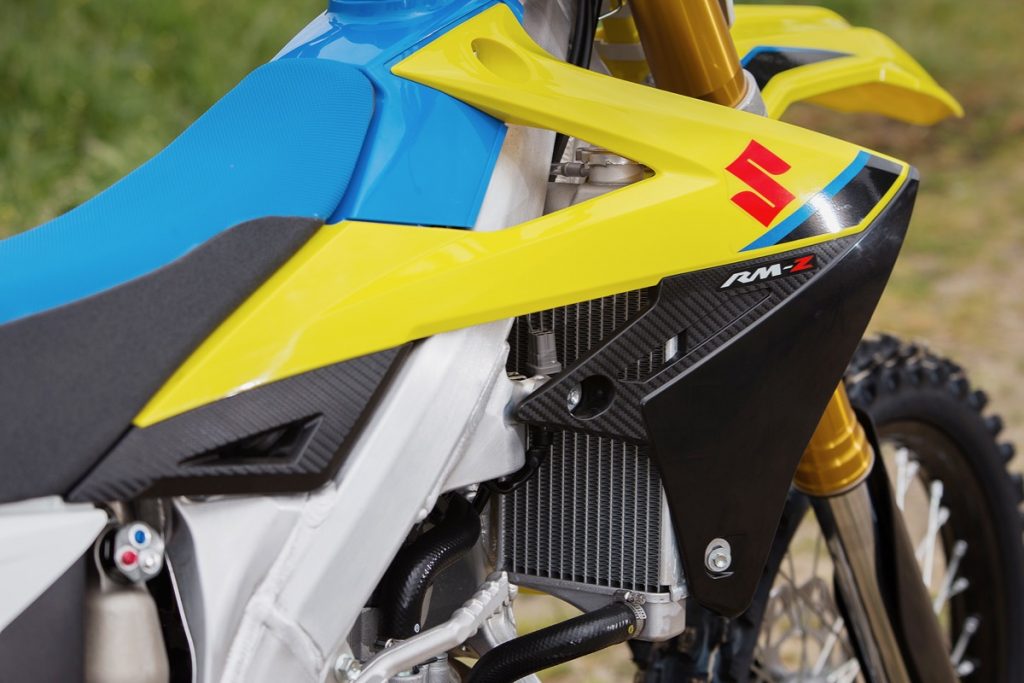 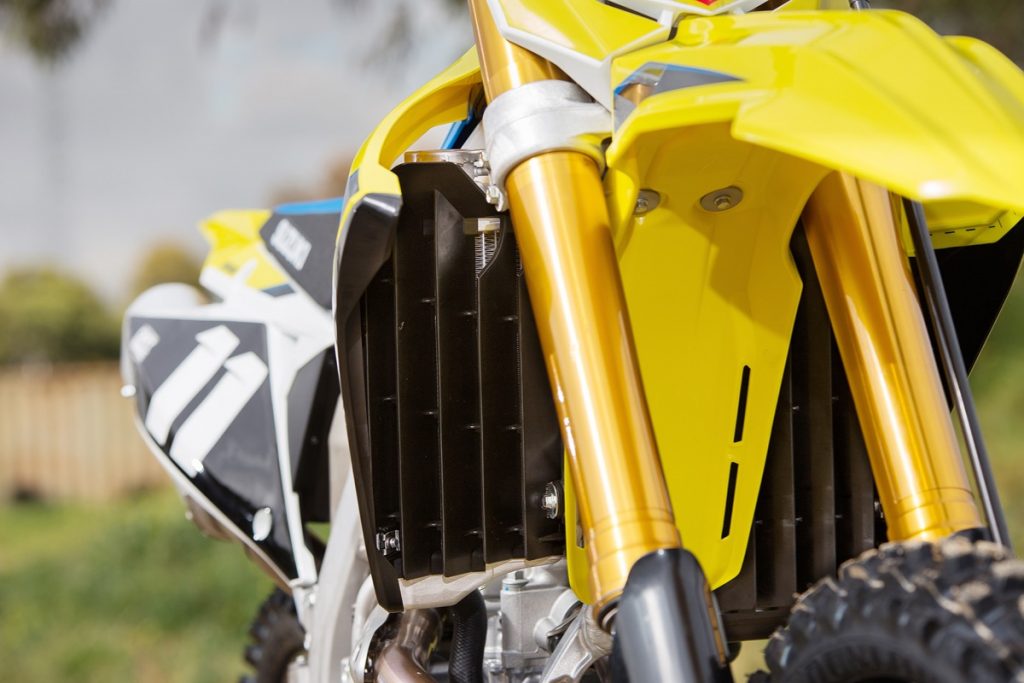 There is very little you can do to change the frame of a particular bike from how it leaves the showroom but there are a few things that will help. The Suzuki is not a bike that will benefit from a colourful set of anodised billet triple-clamps. These will only stiffen up your ride.

Leave the standard clamps on as they have more flex than billet ones and they’re already anodised black so they look plenty cool enough and will go well with the rest of the bike. Leave the standard hubs and spokes on the bike rather than putting on a set of billet hubs laced up with stainless steel spokes.

These wheels are extremely rigid and the opposite to what you should be doing to your machine. You want to get as much flex in this chassis as you can, so keep the Renthal Fatbar on rather than swapping for a handlebar that has a crossbrace. 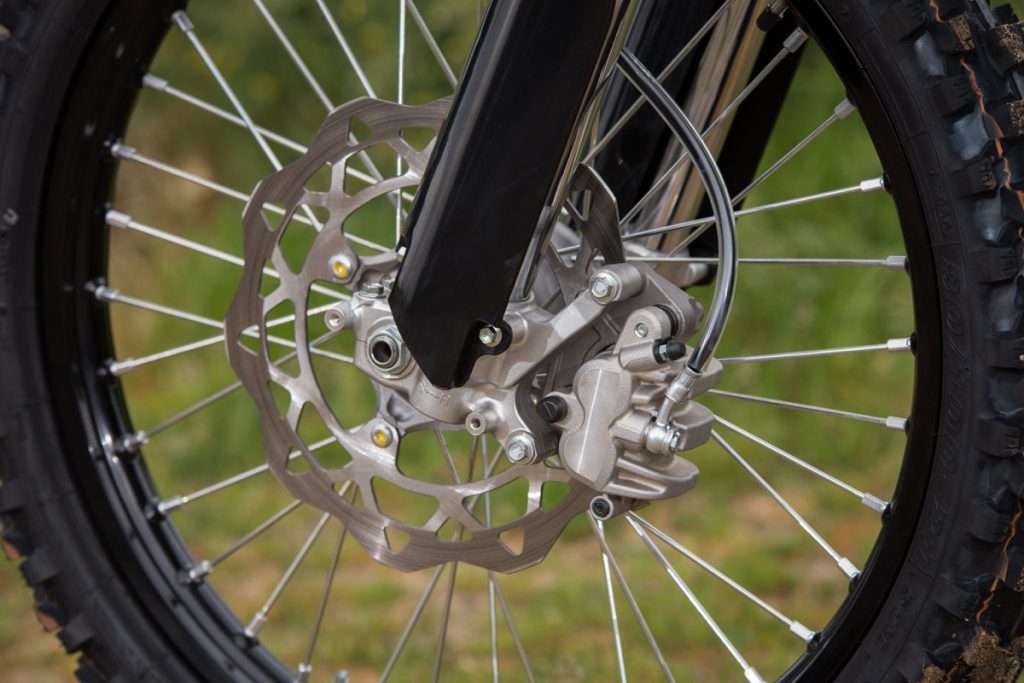 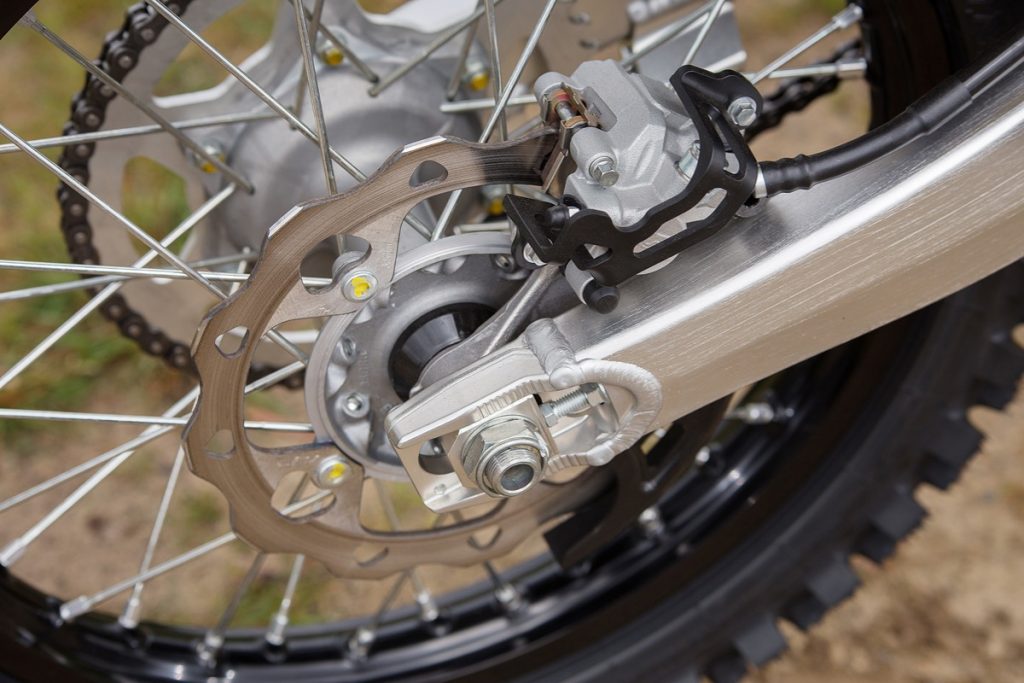 The engine is identical to the 2019. If I had to describe it in one word it would be smooth. Only a couple of years ago I would have used the word docile. This isn’t the case anymore!

It doesn’t produce the most power in its class, but it is user friendly and, for lighter riders, it produces enough power to get you out of trouble.

For me the bottom-end was where it seemed to struggle the most. Both mid-range and top-end power are not too bad once you get the bike up and moving. But, as I mentioned earlier, my 82kg is not an ideal weight to be racing 250s. On a positive note, when I reviewed the 2019 model I got the opportunity to ride the production machine at the end of the day with an after-market exhaust and I have to say it made a huge difference to the power deliver.

I was really quite shocked at how it changed the delivery from a relatively smooth and placid power curve into an impressive, punchy one. I didn’t get the opportunity to test an after-market pipe on the new MY20 but, seeing as the two machines are basically identical, it is fair to say that you will get a huge gain from choosing the right pipe. 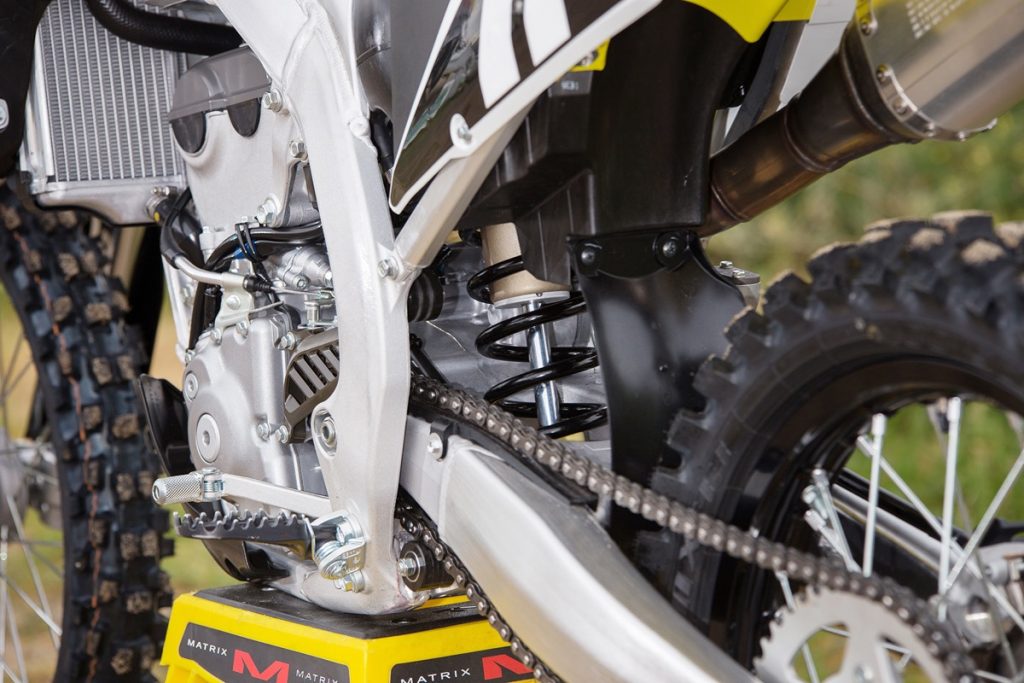 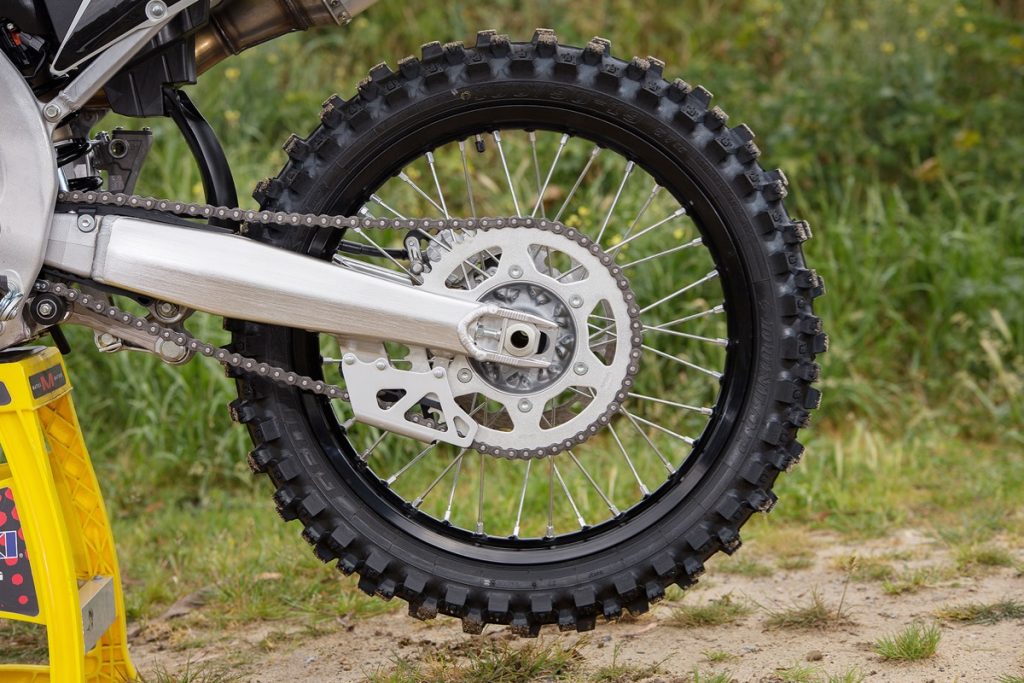 The ergonomics are terrific. It feels aggressive, slim and has an extremely flat profile to the seat/tank junction. The Renthal Fatbar has a nice bend to it without being too high or too low, and certainly doesn’t have too much sweep.

The cable clutch is super light and both the clutch and front brake levers have a nice shape to them. The quick adjuster wheel for the clutch spins freely with ease so tweaking your clutch freeplay on the fly is not an issue. The overall seat/handlebar/footpegs relationship will keep all except the tallest riders comfortable.

Wifi tuning comes standard on the RM-Z250 for 2020. It’s not new to the industry but. as we have seen from Yamaha in recent years. it has the potential to work a treat. Suzuki has named its system MX-Tuner 2.0 and it basically allows the customer to alter the engine mapping via an intuitive WiGET smartphone app which is available for both iOS and android devices. The app comes with several pre-installed maps for different riding styles and track conditions.

For me it was as simple as pulling off to the side of the track and letting Suzuki tech Daryl Fenn know what I thought of the stock engine and where I felt it needed a bit more power. Within about 30 seconds he’d programmed in a new map and I was off and running while the old map was still fresh in my mind. The new map was noticeably better right through the power range but, particularly, on the over-rev. The wifi tuning is quick, simple and easy to wrap your head around.

With minimal changes to the RM-Z250 other than the inclusion of the Wifi tuning as a standard addition we are going to have to wait and see how the bike fares against it’s competitors when they all get pitted against each other in our 2020 250cc motocross shootout. Can Wifi be enough to get the Suzuki into the top three? We will have to wait and see.

Sherco has seen steady growth in enduro sales over the past few years and with a new, bigger factory and a new line-up for 2018, that growth is set to continue into the future.