ADB Technical Editor Mat Boyd tells us about all that’s new on the 2021 Kawasaki KX450 before heading out onto the test track for some laps.

Kawasaki dropped the F-word back in 2019 and everybody went “big deal, so what? Everyone knows it’s a Four-stroke, right?” But this radical move wasn’t just a way to save space on the Bold New Graphics, Kawasaki Heavy Industries was deadly serious about getting ahead in the 450cc motocross game.

Somebody high up in Kobe, said: “If the engineers don’t start lifting their game on our f—ing KX450 and KX250 they’ll get sent to Fukushima.” So the boffins didn’t just drop the F from the name but gave us electric start, a hydraulically-operated clutch, Showa A-kit-style suspension and a new engine with DLC-coated finger followers.

The hydraulic clutch was a first for a Japanese motocrosser and, right from the get go, the KX450 launch-controlled itself to the front of the pack, both in our 450 Motocross Shootout and overseas ones, plus it started winning on the track in what is arguably the most competitive series in the world, the AMA Supercross Championship, with star rider Eli Tomac. 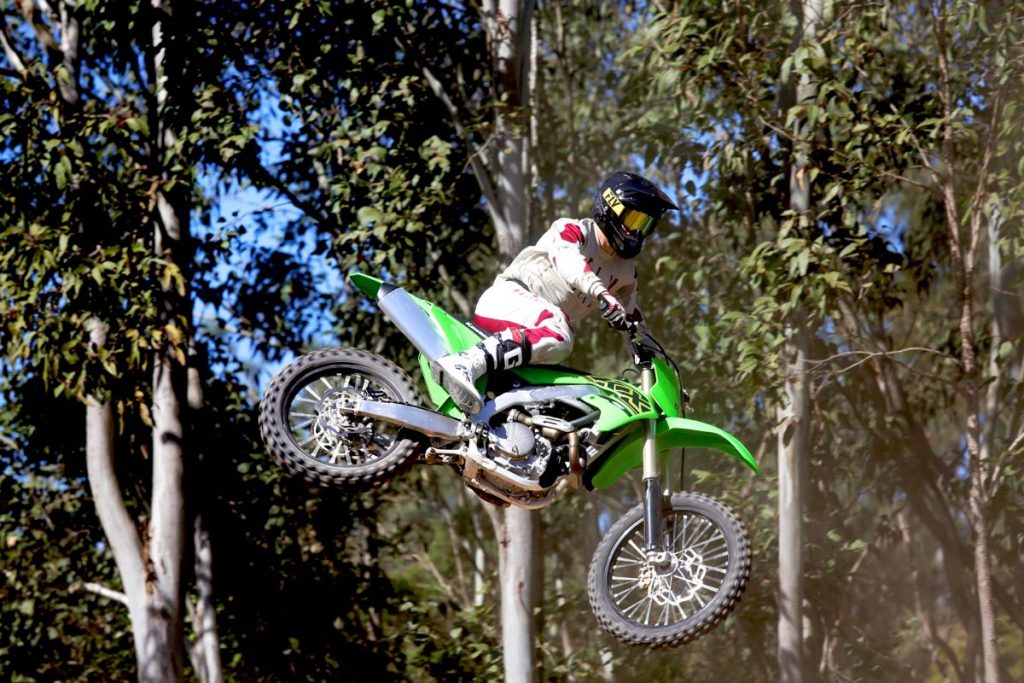 The cylinder-head revamp had some no-hopers suggesting that Kawasaki was just following the European companies, but the truth KHI was using the technology in the World Superbike Championship well before the Euros got hold of it. They have just returned to the technology and believe that many other manufacturers will begin to follow them.

When the 2019 KX450 was released I got the opportunity to ride it for the first time at The Island in NSW. Unfortunately the heavens opened up days before the launch and the track was wet through to the Earth’s mantle far below. The riding conditions were atrocious but, right away, I could tell the KX was a bike that Kawasaki was very proud of. Rob Walker of KA gave us a run down on the bike and you could see the excitement on his face. I vividly remember him saying: “This is a bike we expect to be very successful”.

Crack the throttle to MY20 and there were no major changes while the factory brought the KX250 up to speed, but for 2021 we have seen Kawasaki rectify a few key details despite the debilitating presence of the coronavirus. 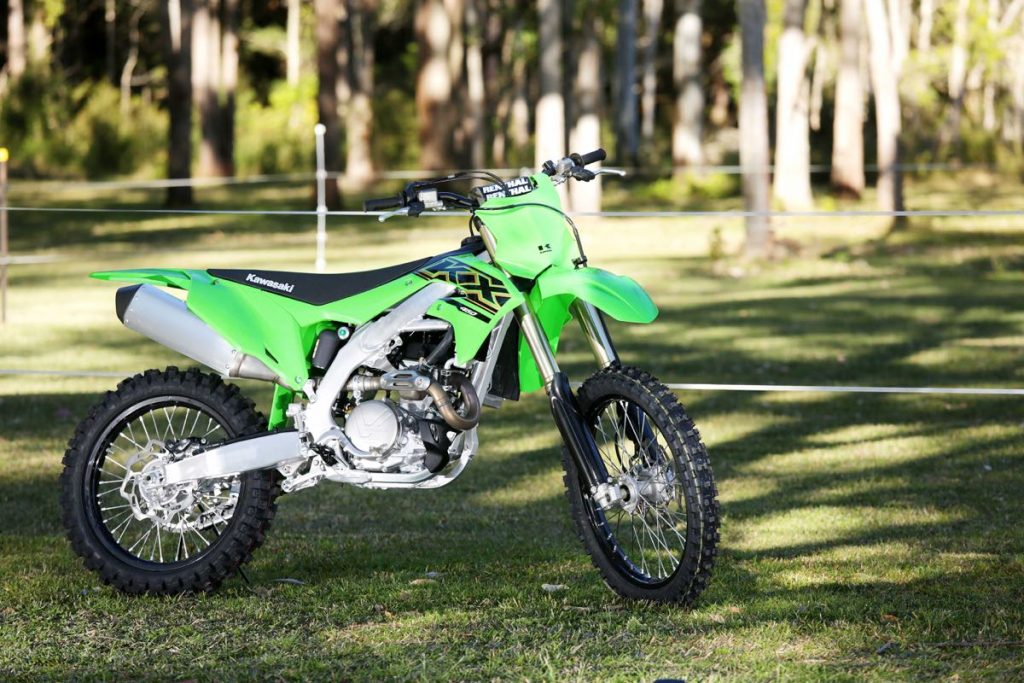 There’s been no ground breaking changes for the 2021 Kawasaki KX450 (the Japanese competition is still catching up) but there has been some updates to improve an already quite impressive package. The piston has a new dry-film-lubricant coating on the skirt, which is intended to reduced friction and boost performance.

The clutch has larger-diameter plates, with revised material and Belleville washer replaces the clutch springs. This tweak is to resolve an issue that some people had with the old clutch tending to fade as it heated up in harsh conditions.

The Belleville washer also makes the clutch lever lighter to hold in. In the cockpit we have seen the embarrassing old 7/8-inch alloy handlebar replaced with a Renthal Fatbar. The Fatbar is much stronger and suits the bike much better than the cheaper, more rigid skinny thing. The price is up just $400 to $12,299.

Before taking off on the KX, I adjusted the handlebar and levers to suit my incredibly meaty hands and then set the rider sag to 105mm at the back. This bike was straight off the boat so it needed to be broken in before I could give it a good flogging. It took a few laps for the brakes to bed in while I was running it in but what I really liked was the action of the Showa suspension from the word go.

I expected the front to be a little stiff but it felt smooth right from the first lap. I was a little cautious with the throttle for the first 20 minutes, just while the engine wore in, and then I started to really get into it to see what the bike can do but I never touched the fork and was really happy with how it worked. 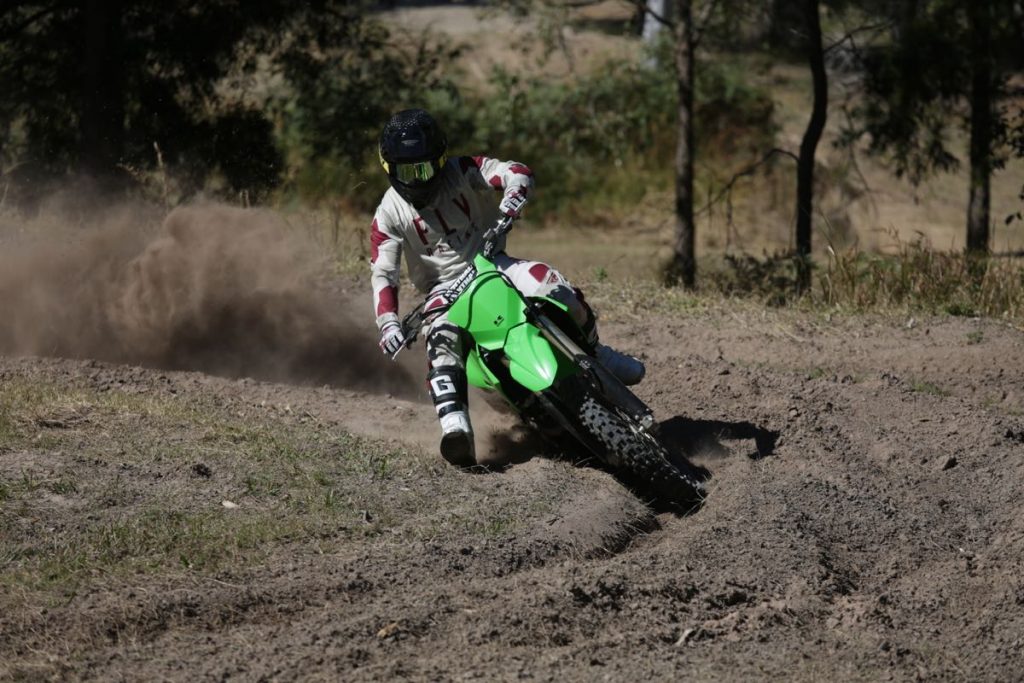 The A-kit-style is smooth and predictable, with a really nice action. If the track was to get really rough then I might have gone stiffer on the compression damping but, for the way the track was on the day, even with the big jumps the fork handled everything I could throw at it.

I expected to have to readjust the sag after the run-in period but, to my surprise, the shock preload didn’t need adjusting all day. I’m a big fan of the adjustment collar on the KX shock as you no longer need a hammer, punch and crazed expression to loosen the adjuster rings. Just an Allen key. I did make a small adjustment to the shock to speed up the rebound as I personally prefer an active shock. This is something I feel helps me keep the rear wheel on the ground during acceleration and braking.

I am a big fan of the creamy power the KX produces. It’s not the fastest 450 I have ever ridden but the power is so broad and smooth that it’s super easy to use and very easy to get the power to the ground without spinning up the rear. The KX is not intimidating, which means you feel good pushing the bike, knowing it’s not going to step out and toss you.
It produces power right through the rev range and that grunt is so linear that finding traction is easy. Changing the mapping plugs really livens up the power but it still doesn’t make the bike too aggressive to ride. 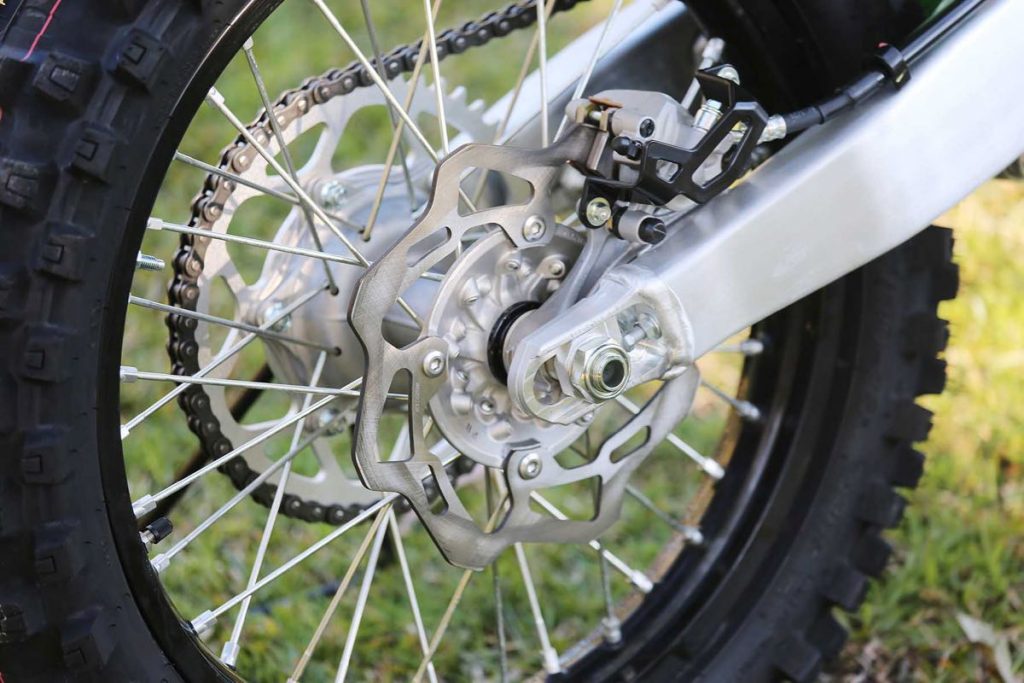 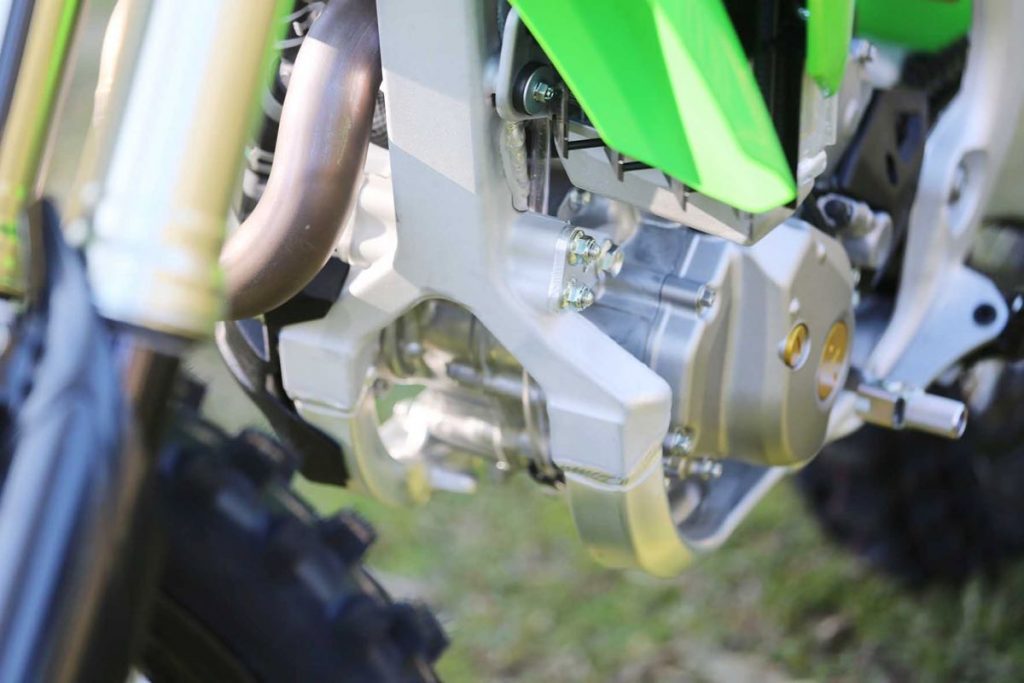 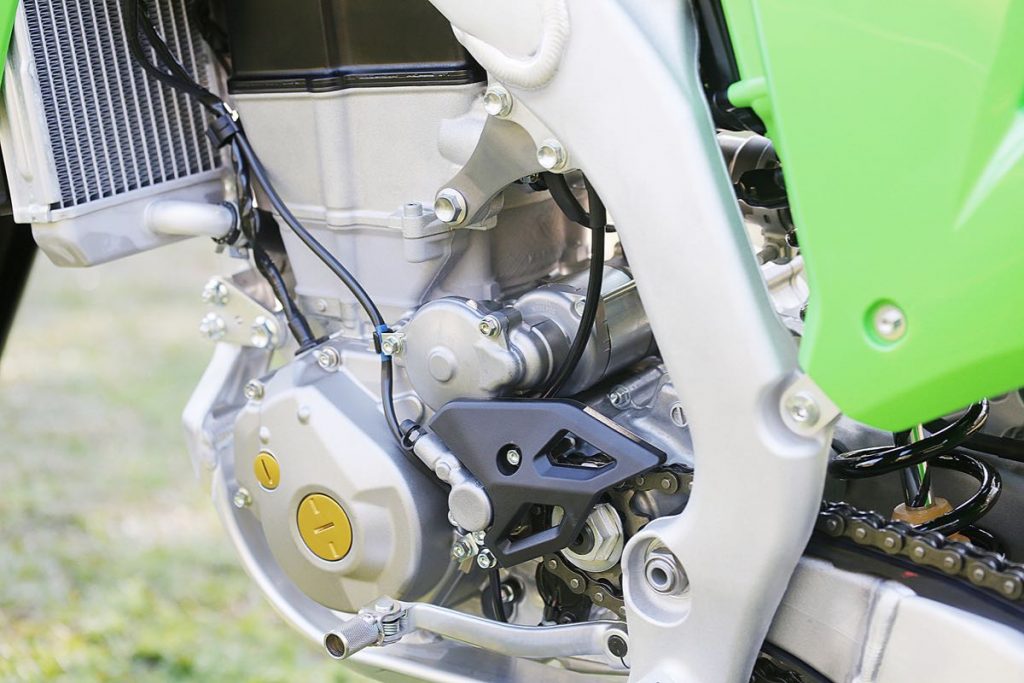 The handling is a big favourite. It doesn’t feel like a large bike and it is easy to push around the track. In fact the KX is so nimble that it feels much like the 250. The bike steers effortlessly and is really easy to throw around off jumps. Often the heavier rotating mass of a 450 engine makes changing directions a chore but the KX is easy to turn down off berms or change your direction mid-corner or even on the face of a jump. The entire package works really well and makes the bike really easy to ride.

The switch to the Renthal Fatbar is a big win for me and makes the bike much more comfortable to ride. The front-end no longer feels so rigid. The brakes and clutch all work well once bedded in and I found the ergos very comfortable, with loads of room to move around in the cockpit.

I really love the fact that the bike can be customized easily to suit a wide variety of riders thanks to the adjustable handlebar mounts and footpegs. I personally preferred the footpegs in the upper holes and the ’bar mounts in the rear ones with the ’clamps turned forward. This is where I felt the most comfortable but I really like the fact that if you’re a taller rider then you can adjust the bike to suit you without having to spend any extra money. Thanks for caring, Kawasaki.

I’ve got a few minor gripes that have stuck with me from the moment I sat on the pristine KX. The handgrips feel like they’re made of the same rubber as the tyres plus they are so narrow you’d swear they came off an 85.

I have big hands and part of my hand actually hangs over the end of the ’grips when I ride. But, for the first time in the KX’s history, I can’t complain about the handlebar but I feel like the cheap, nasty grips just don’t have any place on a Renthal Fatbar. It’s like putting a $5 steering wheel cover on a Mercedes, it just doesn’t feel right. I know most people will just change the ’grips and it’s only going to cost 20 bucks but if the bike was fitted with them in the first place then you wouldn’t need to. Doesn’t Renthal make some pretty decent ones? 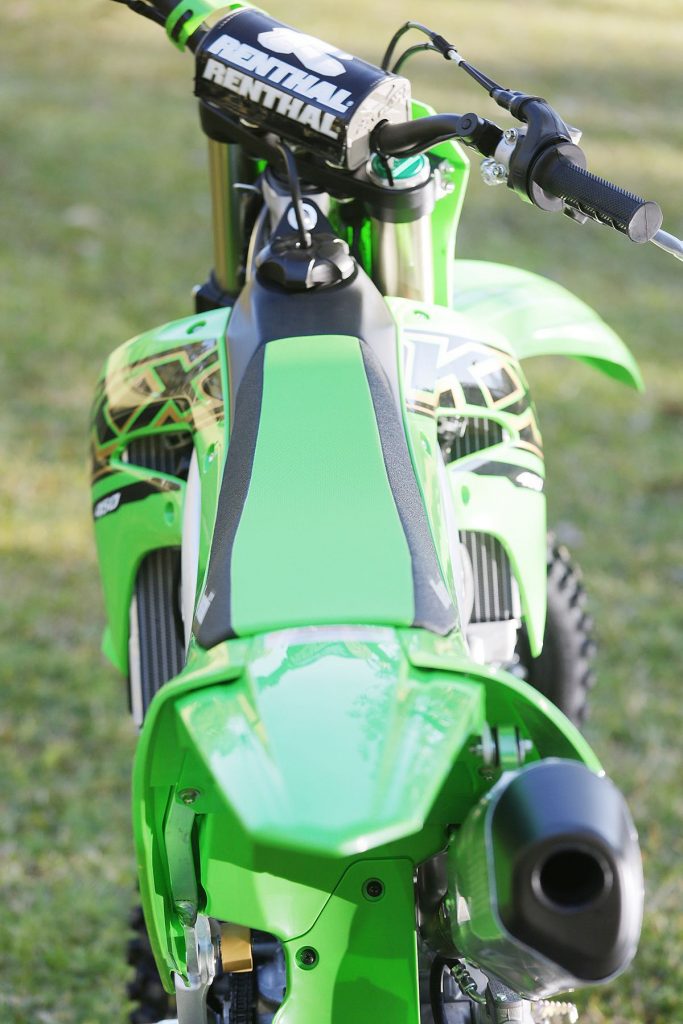 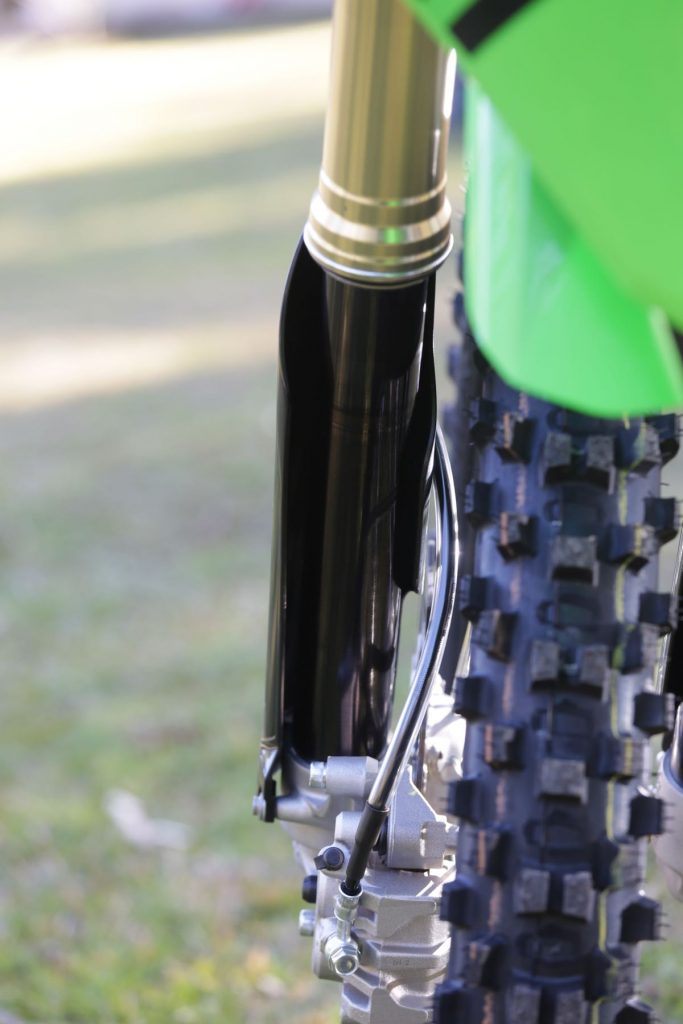 My other minor dislike was the levers. The clutch and brake applicators are different diameters and the brake feels like a knife blade. If the brake lever was the same thickness as the clutch one then I wouldn’t have a problem. It just feels odd, especially when you realise that Nissin supplies both the clutch and brake master cylinders. After speaking with a few aftermarket companies and being told that KX450 levers are their biggest sellers I’m a little surprised that Kawasaki has not addressed this. My last gripe actually stopped being an issue once I got used to the bike. At first I found the fact that the clutch friction point was about midway through the lever travel to be odd, as I am used to clutches that release pretty much as soon as you touch the lever. This way you only need to pull the lever in slightly to slip the clutch. The new KX clutch doesn’t disengage until you’ve pulled the lever in approximately 10mm or more. At first this seemed foreign to me but I quickly got used to it and enjoyed the fact that the clutch no longer fades now that the Belleville washer has sorted that problem.

The fact that Tomac won this year’s AMA 450 Supercross Championship should clear up any doubts but, just in case it doesn’t, let me explain further. The KX has sharp handling, solid brakes, plenty of power and is customizable to suit different riders. That’s a package that is tough to beat.

The engine is not the fastest in the bullring but the beauty of it is the mid-range torque and super-friendly power curve. The power is easy to get to the ground, making the KX an easy bike to control and ride fast. The suspension comes with Showa A-kit cartridges in the fork and is very easy to adjust. 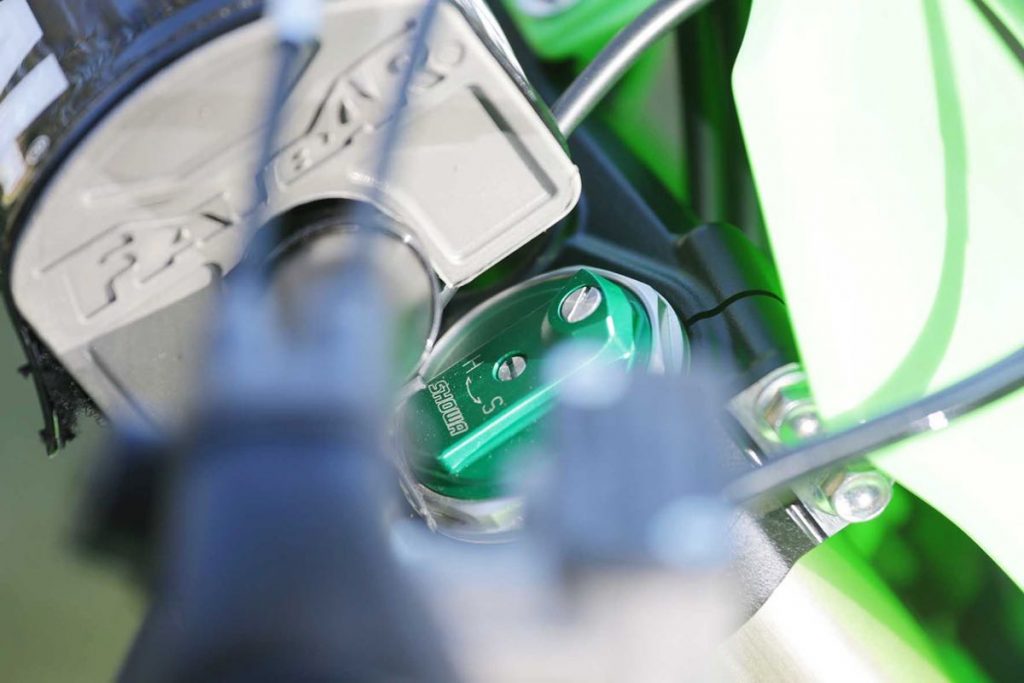 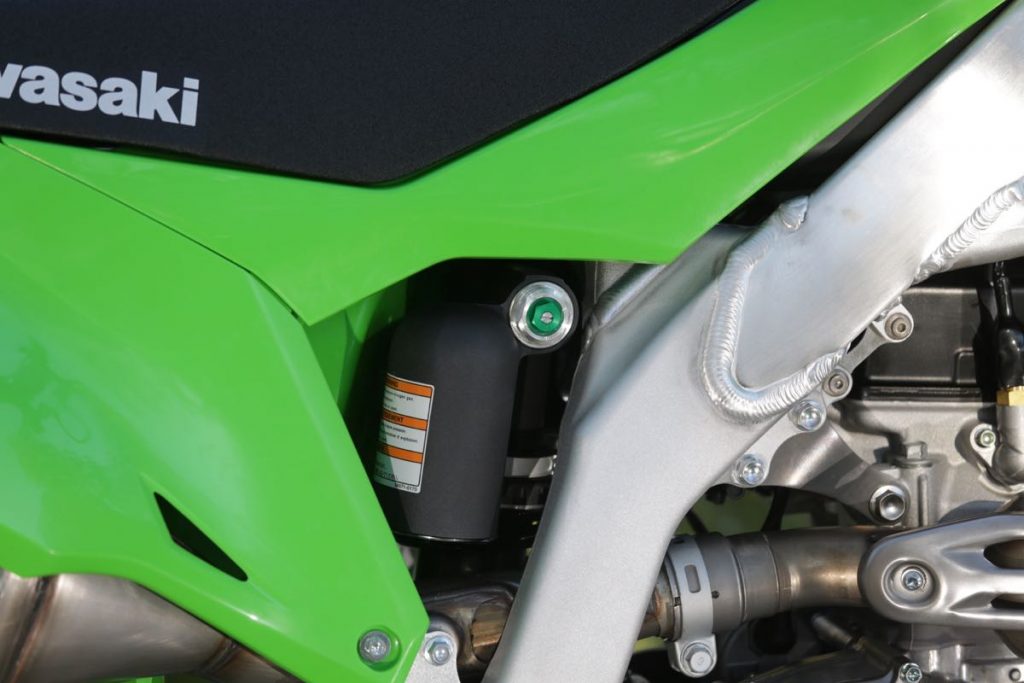 Kawasaki says it’s designed to suit mid- to high-level riders. I would challenge that and say this bike can suit anybody. You can adjust the KX to suit tall, short, big or small riders through the adjustable footpegs and handlebar mounts, plus you can adjust the power curve to suit your ability with the mapping plugs. Where I’m going with this is that I could see this bike winning on many different levels, right from club-level beginners to pro level or experts.

The MY21 changes might only be small but they are noticeable. On paper the new piston coating makes sense but it’s not something I could feel on the bike.
The changes to the clutch certainly make a difference. It no longer suffers due to heat and pulling the lever is much more pleasant with the Belleville washer. The biggest difference I noticed was that once the lever was pulled in and the washer was compressed the lever was easier to hold in.

The Fatbar switch is a big plus as the skinny handlebar felt cheap, had no flex and made the front-end feel stiff. The Fatbar makes the front feel smoother, softer, more comfortable and looks much more modern. So, in my opinion, the 2021 model is a better bike for sure, not by much but it certainly has got better in the right areas.