ADB tests the 2016 250 four-stroke enduro bikes to see which one is our favourite.

The latest 250F enduro bikes are high performance machines and built to last. They are amazingly reliable, have great fuel economy, are very light and easy to handle and they have surprisingly powerful motors.

For 2016, we have four contenders for the quarter-litre enduro bike crown. KTM, Husky, Yamaha and Sherco have all come out to fight for the 2016 ADB 250F Enduro crown.

For this test, we were back at the Braico family farm with an epic enduro loop set up by Rick Braico. We recruited four regular ADB testers who had no ties to manufacturers so there would be no bias and let them loose. 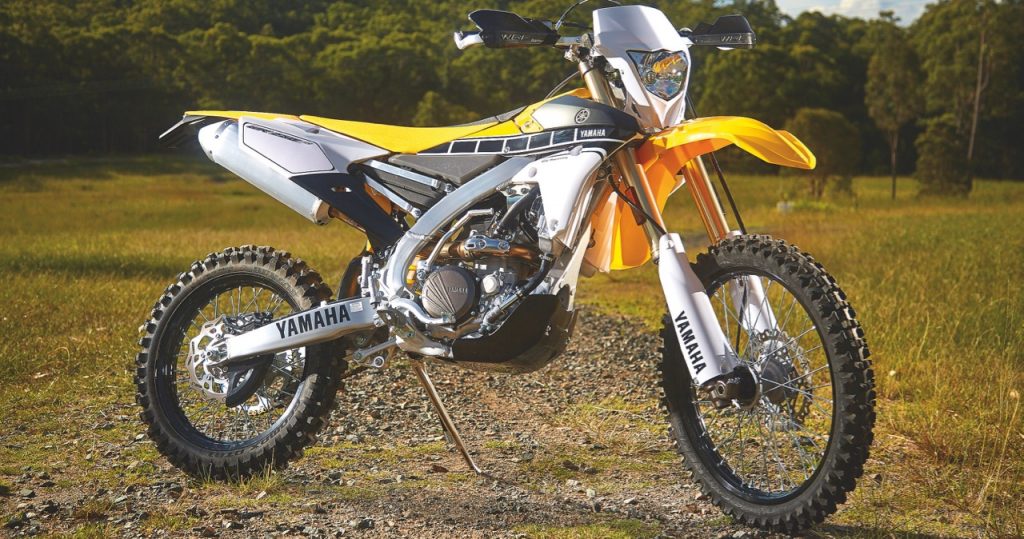 A completely new machine for 2015, the WR250F received only minor changes  this year. The motor is very smooth and produces a nice power curve. It has strong bottom-to-mid power and can be revved hard as well as torqued through the slower stuff. We did find ourselves in between gears a little with second and third, as on the WR450F last month, but nothing a sprocket couldn’t fix.

It has a very stable suspension package which we noticed especially on the grass track as it steered into the ruts with ease and the shock maintained really good traction when under load out of the rougher corners. The fork held up nicely when you charged into a rut. In the rock garden, the front did deflect a little but, overall, the suspension was quite solid.

Unfortunately, it was the only cable-clutch bike of the group, and all the testers noticed. On the plus side, It is the only bike to come with Barkbusters, which is great for your average guy and the 60th anniversary colour scheme is a nice touch.

BRETT: The Yami is a nice bike. One of the better engines of the bunch. Probably the most trail-orientated bike with its softer feel and Barkbusters. Steered really well. Great bike for the average trail guy. Would like it if they fitted an hydraulic clutch.

MAT: I felt the most comfortable on the Yami on the grasstrack. I liked how stable it felt when I came into the ruts and it rolled through the corners and powered out nicely. I really liked how easy the motor was to use. I just had a little issue with some deflection over the rocks.

JARROD: I like the Yamaha. Motor is a lot smoother than the WR450F. It felt nice and light and easy to flick between the trees. Had a nice power range all the way through from the bottom to the top. Bike felt stable and the shock drove really well. 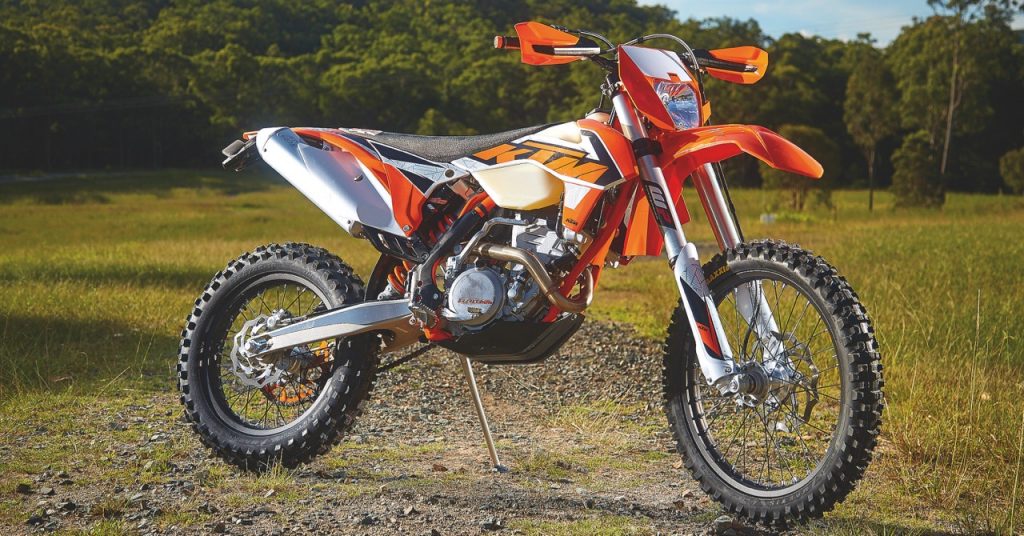 The KTM has remained relatively unchanged for a while. Much like most of the 2016 KTM EXC range, it’s had just minor refinements. The motor produces very strong bottom-to-mid power and that was especially noticeable in sections in which you could pull third gear while other bikes you had to drop back to second.

It produces good top-end power too. Plenty of torque down low makes riding through the gnarly stuff an easy task. The new fork offset setup that KTM has put in place for 2016 makes a big difference in the front end and while it is only the offset and the axle size that is different, it offers a really plush feel and also a very stable feel. The nervous feel that KTMs were known for has gone. It now seems to have a really planted front end that gives great rider feedback over the smaller bumps.

It is very easy to move around on the KTM and that gives you confidence when darting in and out of the tighter singletrack. Air filter access is very easy although it does get quite dirty in dusty conditions. The Brembo hydraulic clutch has great feel and the brakes are damn good.

JARROD: The motor is super smooth and can pull almost any gear you want it too. I really liked the new front end setup. It gave me good feel over the tree roots and I had the confidence to push hard. My pick of the bunch.

MAT: A really smooth and easy bike to ride. Seemed to track straight and stay planted over the rougher terrain. I did find myself chopping and changing through the gears between second and third a bit more than other bikes.

BRETT: The KTM produced good power. While it probably wasn’t the most powerful, I thought it had the most linear power. For a rider like myself who does more riding then racing, the suspension is pretty solid and I felt like I could ride it all day. 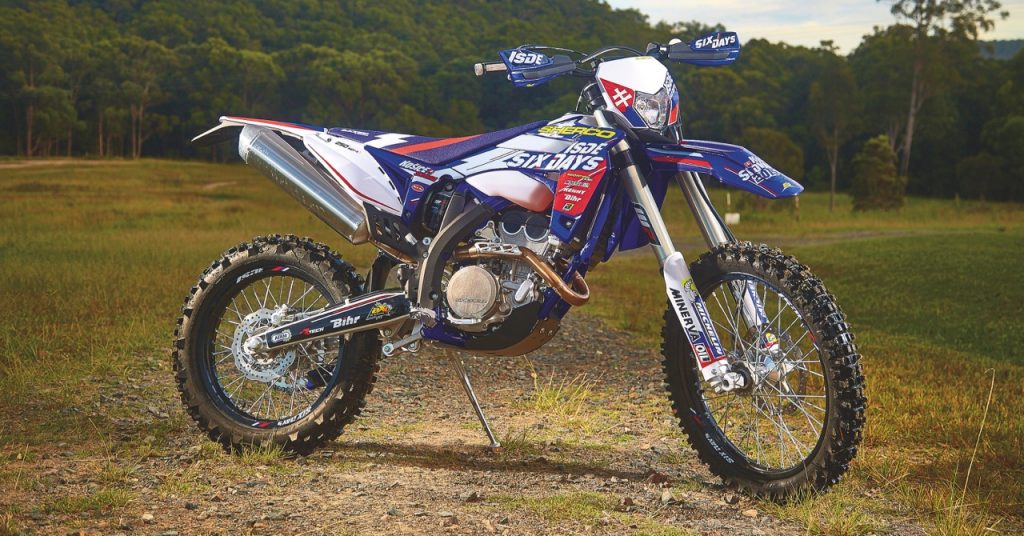 For 2016, the Sherco has received the most updates. Changes to the engine, gearbox and mapping had us itching to ride the French beast. The first thing you notice is that it feels restricted compared to the other bikes, especially on the stock ignition setting.

We switched it straight over to the race setting and there was a big difference but the bike could really benefit from an aftermarket pipe. It does rev slowly and, once you get into the revs, you really have to stay there. The motor likes to be revved hard and has a cool exhaust note to go with it.

You really have to be on the ball with the Sherco. Some sections of the loop, our testers said that they had to go back to first just to keep the revs up. Once you get your head around the extra revs you need, the bike works quite well. As far as handling goes, it is a similar story to the motor.

It has a soft front end. Combine that with the engine braking and it has a tendency to dive into corners. We did add some preload to the fork and that made it sit up in the stroke and feel better. Having more preload also makes the bike more balanced.

Once you are into a corner and settled, get on that clutch and get your revs on because that’s how it has to be ridden. It feels very nimble between the trees and can make a quick direction change with ease.  Sherco seems to have taken a race bike and tried to mellow it out for the average guy but it may be too mellow.

The model we tested was the Six Days which looks really trick. It comes with a special graphics kit, gripper seat, a handlebar-mounted ignition switch, hydraulic clutch and good brakes, which all are great features.

MAT: I struggled with this bike. I felt like it wanted to rev but something was restricting it. It was okay if you held it wide open and clutched it around the track. It felt nimble and steered well but I just had to be so on-the-ball with the power to enjoy the ride.  It looks cool though.

BRETT: Once I came to terms with how the motor worked and that I had to rev it more than the others, I quite liked the Sherco. It steered really well for me and I enjoyed how easy it was to flick from side to side on the singletrack.

JARROD I found this bike had no bottom-to-mid power. You really have to rev the bike to the moon to get it to work. I found myself fighting the bike mid-corner as it has a lot of engine braking. It looks trick and I would like to ride one with a bit of work done to it. 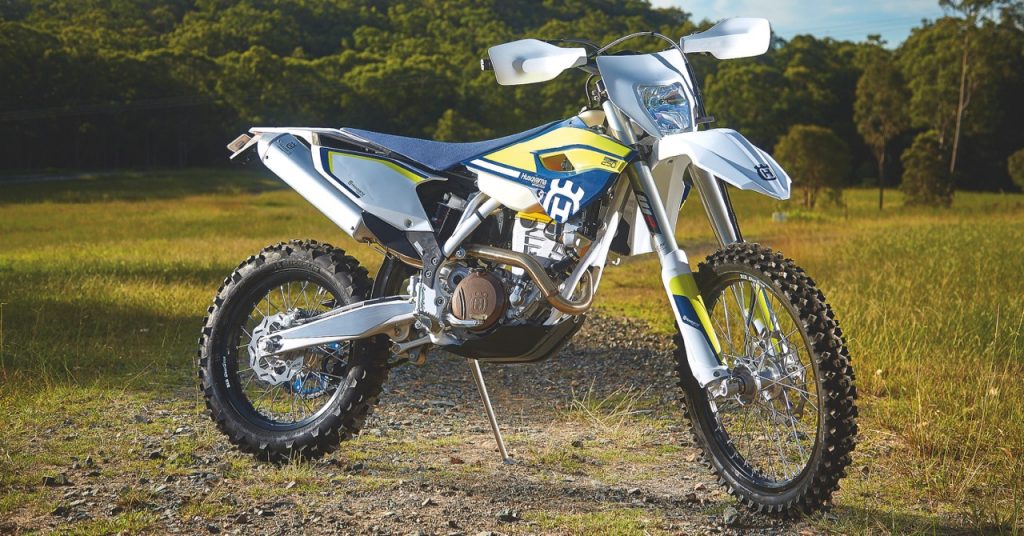 The Husky was another bike that’s had minimal changes. It seems to have a very similar engine feel to the KTM as they do have the same motor but the Husky airbox is different and is a little more restrictive. The power is just a fraction down but still feels very nice.

It pulls nicely throughout the range and is very smooth and easy to ride. The shock is very nice and has a planted feel that really gets good traction out of corners and on techo uphills. The 4CS fork is soft but manageable. It didn’t deflect through the rocks and offered a comfortable ride in the tight, technical stuff.

Once you get out onto the faster, rougher tracks, the 4CS is too soft and dives, but it is much better than previous Huskys we’ve tested. Being that the 250 is the lightest of the four-stroke range; the 4CS is closer to where it needs to be than on the bigger models. This bike feels very easy to transition from sitting to standing.

JARROD: I enjoyed the Husky. I rode the 2014 version, and the 2016 is a big improvement. The motor feels a little softer than the KTM but still nice and solid. The monoshock works really well and the bike is very easy to ride.

MAT: Smooth power, plush suspension and very easy to ride. The fork holds the bike back a little when you start riding fast but to trailride it’s a great bike.

BRETT: I like the power of the Husky. Felt nice at any revs and was easy to ride. I really like the linkage. Probably my favorite shock of all the bikes. It tracks really well, especially up the gnarly hills.

VERDICT: The winner of our 250F enduro shootout is the KTM 250EXC-F. It has a strong motor that you can ride at any pace with ease and suspension that feels super plush and useable. The Yamaha and the Husky aren’t far behind and the Sherco has the potential to be a class winner with a few small mods. The market for 250F enduros is definitely a strong one and these four bikes prove that sometimes size isn’t everything. These little bikes definitely can hold their own. Geoff Braico

To read the full shootout checkout Issue #441 of ADB