The 2013 Suzuki RM-Z450 is a few years old now but it's still a great option for riders looking for a second-hand 450F motocrosser.

With a racing heritage spanning over 50 years, the guys at Suzuki have always been at the forefront of motocross development. Being the first company to mass-produce a 450cc motocross engine gained them a lot of success with the Ricky Carmichael.

Ricky was able to provide them with many hours of testing and feedback allowing Suzuki to develop a bike that has been getting better each year and the 2013 model did not disappoint.

For 2013 Suzuki focused on increasing the midrange power of the engine by redesigned the piston to make it 13% lighter. They mated it with a redesigned con rod and revised intake camshaft timing and profile.

For better reliability as well as reducing friction, they added a Diamond-Like Coating to the crank and piston pin adding to the longevity of the engine.

The 2013 model can get the power to the ground quickly without tearing off your arms. The reduced weight in the engine takes away the heavy, rotating mass you feel in most big 450 engines.

The initial hit straight from the bottom is smooth and as the bike revs up it starts to take off. The power is broad enough for any rider to handle – if you want to wind the throttle on slow, then the bike is very smooth and rider-friendly but, when you want to seat-bounce a double with a short take off, all it takes is one quick pull on the throttle and you are launching off into the air.

The 2013 RM-Z450 gives riders the ability to change the engine mapping by changing the coupler. I found myself on the richer map, which gives the bike a much flatter power curve, meaning I had to be in the right gear all the time or the bike would bog and not pull through the tight turns as well as it would on the standard or leaner map.

It certainly makes a big difference on the slippery, hard-pack stuff and will definitely be a great for anyone coming from a 250F onto a 450F. The leaner, more aggressive map transforms the bike into something a bit more my style. But, even with the leaner map, the 450 doesn’t become a light-switch. 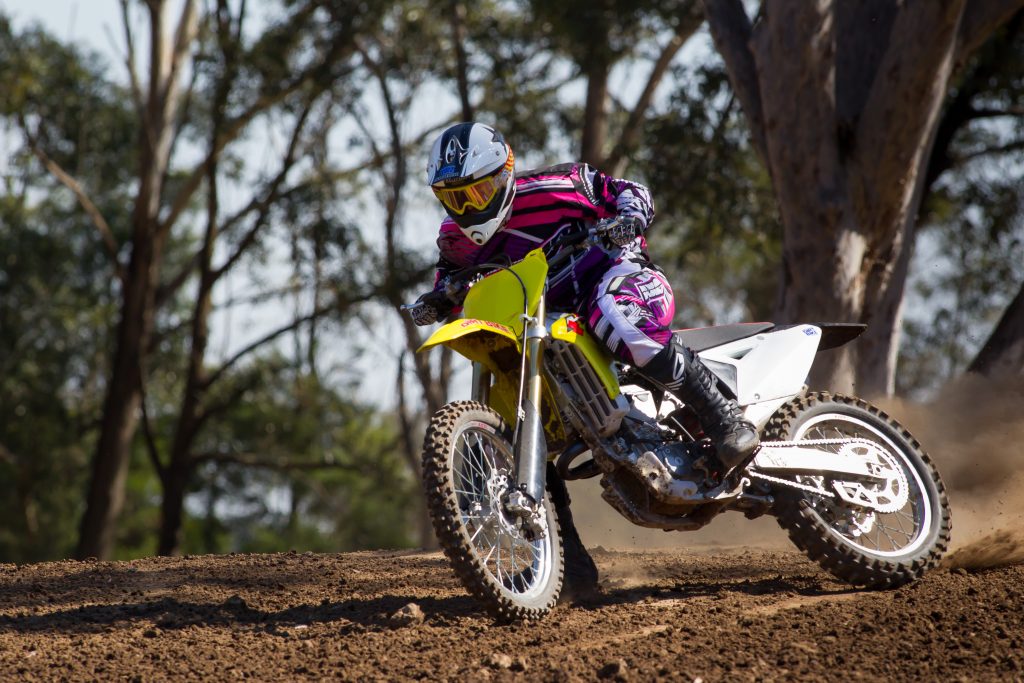 The 2012 RMZ was already on my list of favourites, due to its easy riding and handling characteristics but with the new frame design, revised linkages and Separate Function Fork, the 2013 model is even lighter and more nimble.

The bike is stable and well-balanced at whatever speed you choose. The whole frame has a very rigid, solid feel to it giving you 100% confidence while diving into ruts or fast turns. The bike feels like there is no weight in it.

You can change direction with ease and don’t have to fight it into tight lines. The whole bike tips into corners nicely and doesn’t feel like you are moving a 450 around.

The second-generation Separate Function Fork appeared in 2013 for the first time on the RMZ and, having tested them on the KX250F, I have a little knowledge on how great they are already. There is definitely less weight in them, but the average rider would never know.

The big advantage with the SFF is you have much more adjustability over a conventional fork. You can now wind up the spring preload with a clicker adjuster, instead of having to send off your fork to a suspension tuner with a sack of gold. You still have the compression and rebound clickers located in the left fork to get your suspension setup really dialed in, but this now gives the rider the advantage of being able to adjust the spring preload at the track as the conditions change.

The big highlight for me is how the whole suspension package works well together. While having a nice plush initial feel, it never dives in the front or bottoms harshly on bumps or jumps.

It stiffens up nicely before the bottom of the stroke, and gives a very smooth and confident ride. The front feels stable turning on the ramps of jumps and braking tight into slippery flat turns. It felt better to me with the suspension stiffened a few clicks from standard, with the preload adjusters wound a little further in, but Andrew loves it straight out of the box.

The big platform pegs gives a sturdy and comfortable feel, without getting in the way and catching on ruts or jumps, and the brakes have a nice, solid feel and can be used smoothly or harshly without washing out the front wheel or overheating.

The 2013 RM-Z450 proves that sometimes sticking with a great product and making it even greater is the better option to go with. Taking a bike that is already well-balanced and easy to ride, and enhancing those attributes has definitely make the 2013 RM-Z450 an impressive machine. If you’re in the market for a used 450F motocross bike, it’s well worth a look.