Out of the box, the BMW G 310 GS is best described as a soft-roader, with it’s reverse-head motor, plush suspension and 19/17-inch cast aluminium wheels.

Some might scoff, but this entry-level end of the adventure bike world is growing quickly, with the recent arrival of Honda’s CRF250L Rally, Kawasaki’s Versys-X 300 and Royal Enfield’s 411cc Himalayan, while Suzuki’s V-Strom 250 landed in September and KTM is set to fire its first shot in the class next year with the 390 Adventure.

Little wonder then that BMW, a brand with an adventurous nature second to none, should want to get amongst it, with a small-capacity machine. In co-operation with Indian manufacturer TVS, the 310 GS was developed alongside a 310 roadster, thus spreading the R&D costs, with both bikes being built in India where overheads and labour costs are significantly lower than in Germany. The 310s promise to do brisk business in India and other Asian countries, where small-bore machines dominate the motorcycling landscape, but they are also being taken globally and have already gone on sale in the U.S., Europe and Australia.

Two of the first 310 GSs to arrive Down Under were earmarked for accessory supplier Rally-Raid Products, to be used as development mules for a wide range of their British bolt-ons. The two bikes were fully kitted out and ridden in the APC Rally by BMW Australia GS ambassador Amy Harburg and the son of Rally-Raid owner John Mitchinson, Adam. 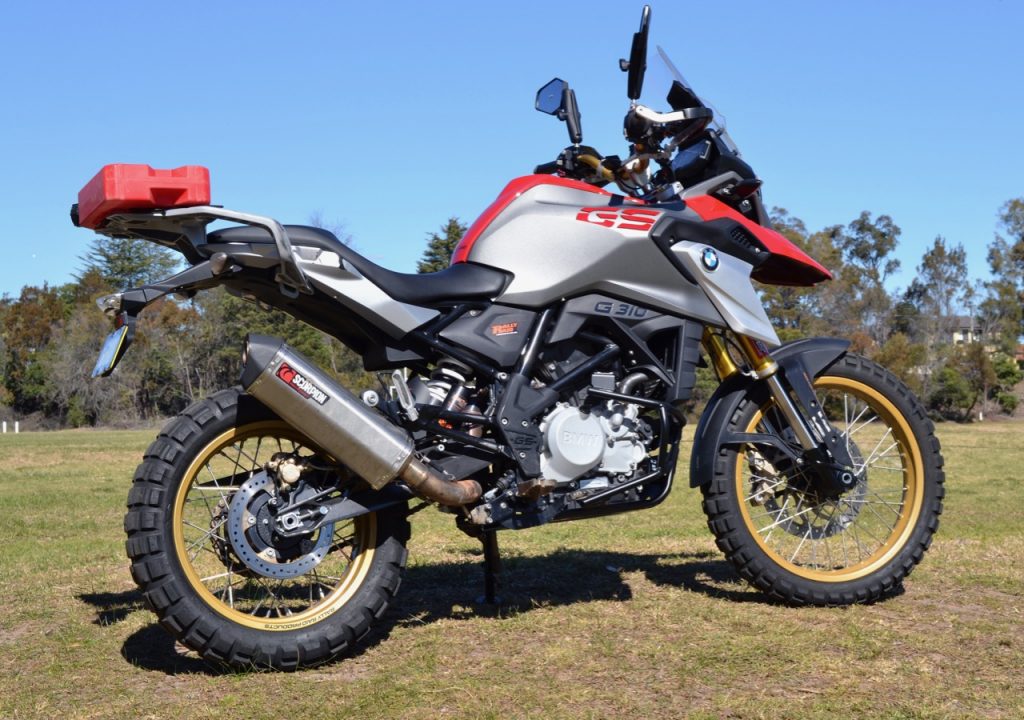 Now, there’s no question the bog-stock 310 GS is way more soft-road than off-road ready – given its plush suspension, alloys and minimal sump protection – so Rally-Raid had a lengthy job list. But they’re well versed in this kind of project, having been through a very similar exercise with Honda’s unlikely CB500X.

Starting with the suspension, Rally-Raid created Level One and Two kits for the 310 GS. Developed in conjunction with European suspension specialist Tractive, the Level One kit retains the bike’s standard 180mm of wheel travel front and rear and 835mm seat height, whereas the Level Two set-up increases travel by 20mm at both ends and boosts the bike’s ground clearance by 25mm.

Next up came more durable and dirt-ready wire-spoked wheels, with Rally-Raid producing its own CNC-machined alloy hubs and mating them with heavy-duty spokes and rims that accept the standard brake discs, ABS sensor rings and cush-drive assembly from the original wheels. The wheels can be supplied for tubed or tubeless tyres as desired, with a choice of black or gold rims. 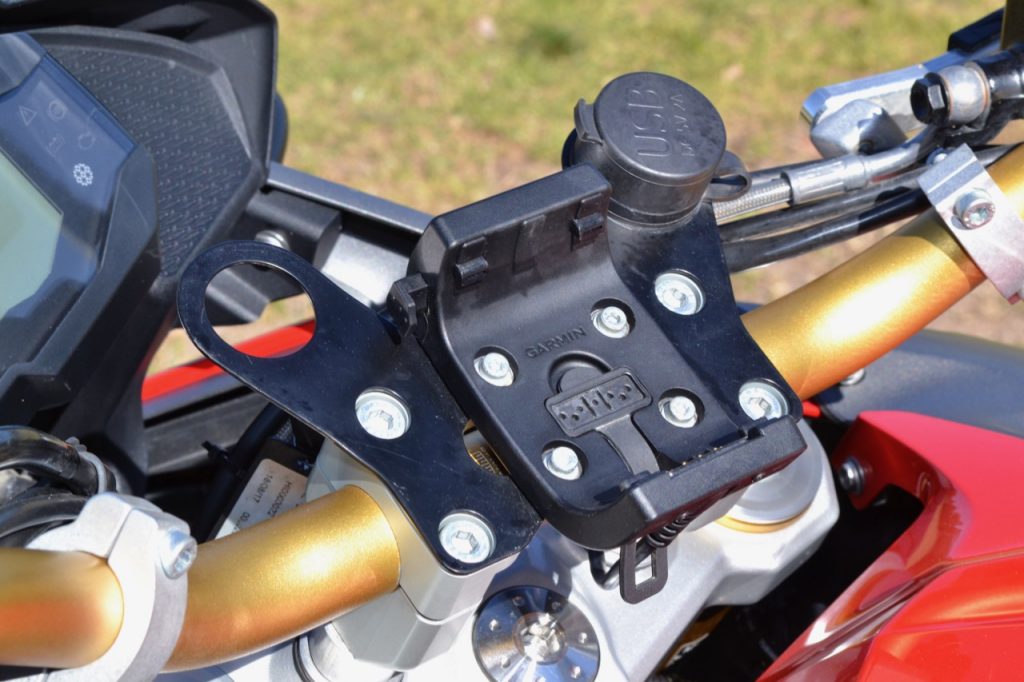 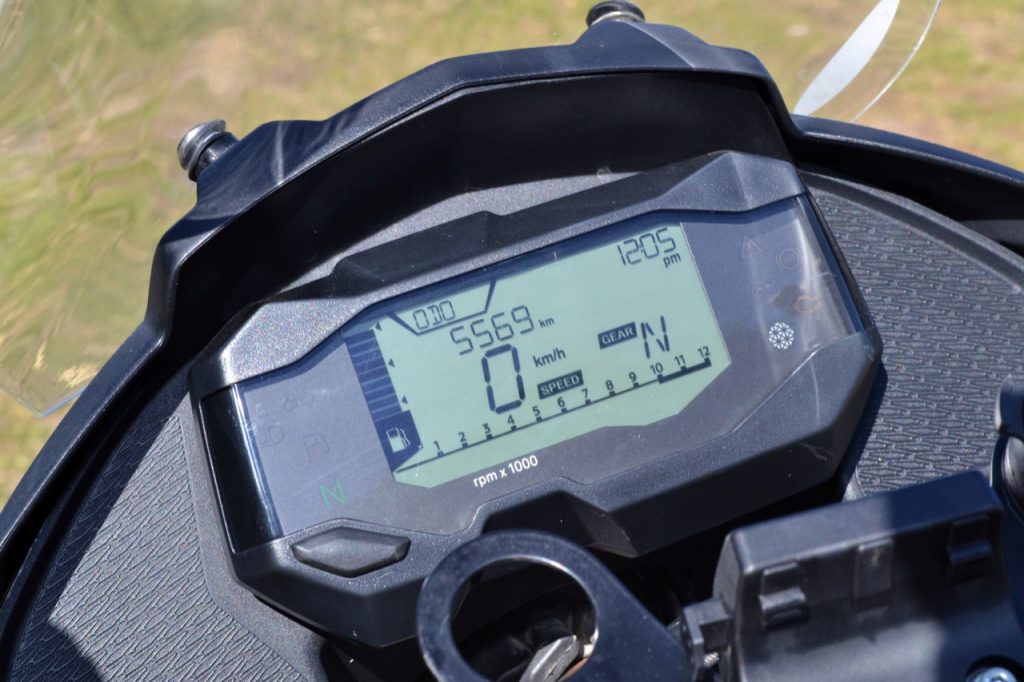 A minimal plastic skidplate is all BMW offers to protect the sump and cases of the EFI-fed 313cc six-speed motor; there aren’t even any frame rails below the donk, which is suspended from the backbone. Rally-Raid produced a comprehensive engine guard that covers the full length of the sump and extends forward up around the oil filter. With a tubular steel framework, the guard attaches entirely to the bike’s chassis, not to engine mounts which could be damaged by big hits on logs, rocks or G-outs.

Helping to open up the cockpit, Rally-Raid created ’bar risers and a replacement top handlebar clamp to use with the stock 7/8th-inch handlebar or accept adaptors to take stronger Renthal RC high bend tapered ’bars, which were fitted to the APC bikes. The stock cables and hoses work with the taller ’bar, while the top ’bar clamp also features mounting points for a GPS – Adam and Amy ran Garmin Montana units in the APC – and can accept power outlets.

A taller ’screen from Power Bronze replaced the very short stock item, to give better wind and weather protection on long transports, while the woefully narrow and uncomfortable standard footpegs have been replaced by bear-trap prototype footpegs that will soon go into production and offer a way more stable and comfortable platform.

Giant Loop Coyote soft luggage bags were used on the APC to carry their gear, with a Rally Raid luggage plate and Rotopax mount (for added fuel capacity in addition to the bike’s 11-litre tank) mated to the standard rear rackd. Rally Raid is also working on side luggage racks for use with softbags. Other detail mods included fitting Double Take mirrors, reach-adjustable alloy front brake and clutch levers, Continental TKC80 tyres, sidestand feet and a protector for the large single radiators. 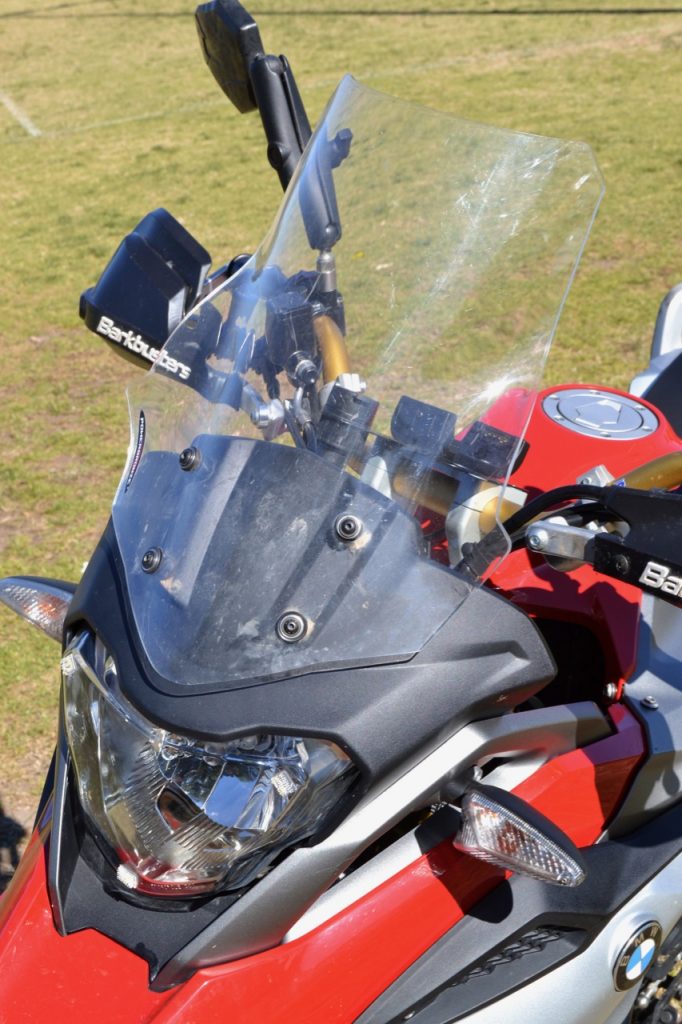 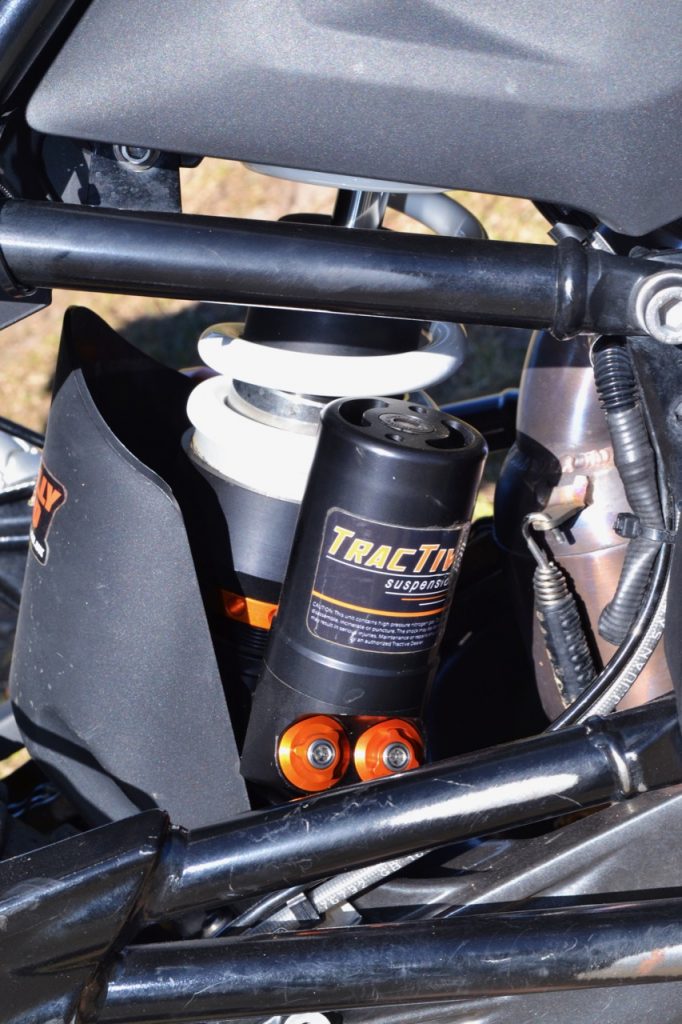 Finally, the standard silencers were replaced by Scorpion mufflers, which offer a 2.5kg saving while boosting performance and aural pleasure.

After coming through the APC with flying colours – the only ‘technical’ issue was Adam damaging a rear tyre on day three – Amy’s 310 was shipped to Russia for her to ride across Eastern Europe (see sidebar on left), while Adam’s bike remained here to continue its role as a Rally-Raid test mule as more products for the GS are developed.

When the chance to throw a leg over Adam’s bike came courtesy of Dave Darcy, from Motorcycle Adventure Dirtbike TV, we jumped at it and promptly plotted an overnight loop from Sydney to the Hunter Valley.

At first sight, there’s no question the Rally-Raid 310 GS with its spoked wheels, gold rims, TKC80 knobbies, Scorpion muffler, engine guard and taller suspension looks way more adventure-ready than the standard machine. It feels way more dirt worthy, too, when you climb aboard, being notably taller than the standard bike and the higher ’bar and beefy prototype ’pegs much improving the ergos.

CRUISING
The first hour of the ride was spent getting out of Dodge with a dawn charge up the M1, where the 310 quickly settled into an indicated 115kmh at 7000rpm in sixth gear, with another 2500rpm on tap to reach the bike’s maximum power output of 25kW at 9500rpm. The little engine thrives on revs, delivering its first decent boost of performance from 4500rpm or so, and then again at around 6500rpm and all the way to the 10,000rpm redline.

The bike pulled top gear all the way up the motorway, even on the climbs from the Hawkesbury River and Mooney Mooney bridge, and sat on the speed limit the whole way, with more in reserve for passing moves as required. Above 7500rpm there’s a tingle through the ’bar, tank and ’pegs, but the small thumper handled the high-speed commute more comfortably than might have been expected. 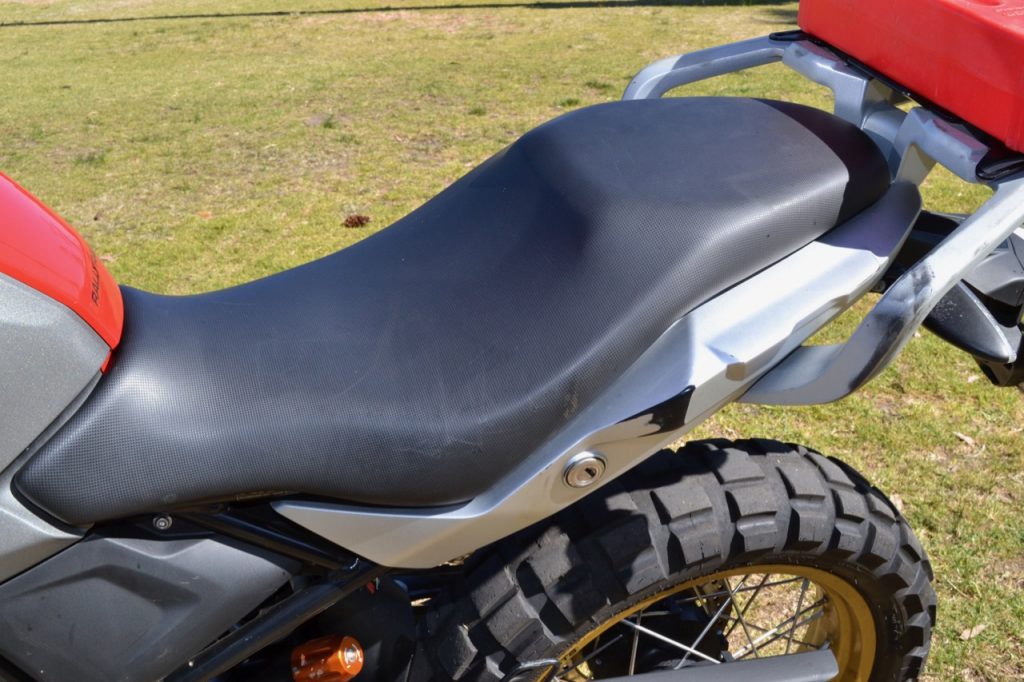 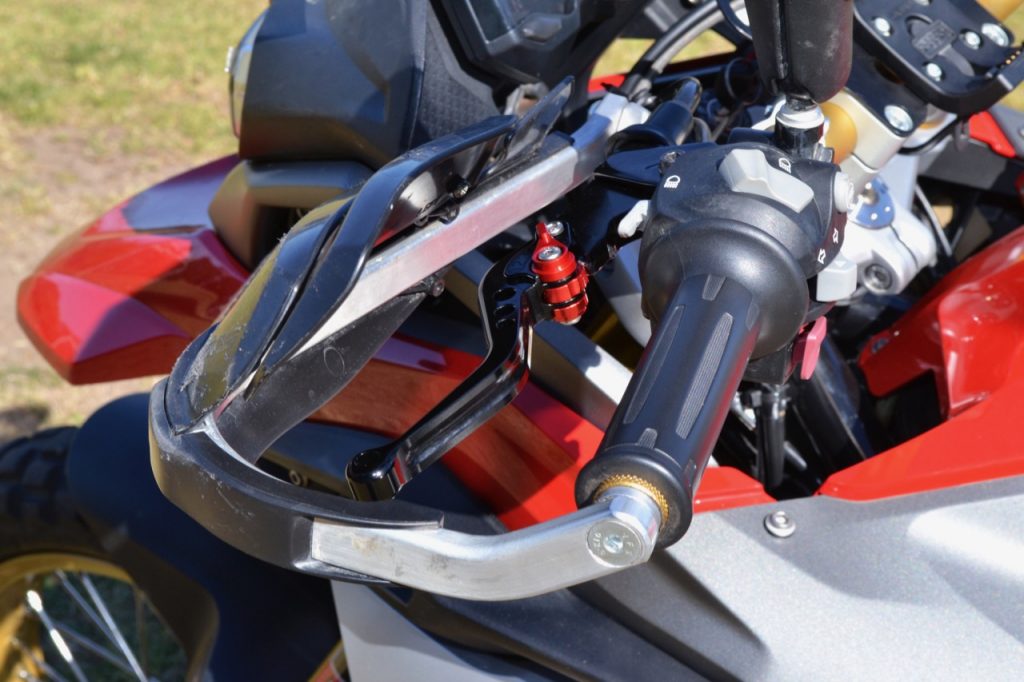 Hitting the bush and exploring fire-trails through the Watagans, the 310 demanded judicious use of the clutch and gearbox, especially on narrow tracks that required first and second gear to exit tighter corners and clear obstacles. The cable clutch is light, while the gearbox shifts sweetly, but keeping the motor spinning above 4500rpm with handfuls of throttle is the key to getting the best from the bike in the bush. The final-drive gearing feels a tad tall in the bush, but going lower would hurt highway performance.

A stock 310 GS weighs in at a claimed 169.5kg (wet), making it a lightweight by adventure bike standards, and with a 1420mm wheelbase, it’s a flickable package that is only improved by Rally-Raid’s longer travel and better damped suspension. This bike sits higher in the stroke and allows you to tackle off-road obstacles with greater confidence than you could on a standard 310, knowing that the bike’s underbelly is protected by the Rally-Raid engine guard.

While the standard 19/17-inch wheel sizes are retained, the wire-spoked wheels will prove far more durable in the long-term for off-road riding than the original alloys. The standard ABS set-up carries straight across to the Rally-Raid hoops and is switchable, even on the move. The 310 uses Bybre calipers and while the front is a 300mm rotor, there’s not much feel, while the pedal is low and tucked in close to the engine, making it tricky to get at without turning your toes inward.

Considering how much the 310’s motor likes to rev, fuel consumption on our ride averaged just on 30km per litre, giving the tank a range of 330km. The bike’s LCD dash offers a myriad of riding information, including speedo, tacho, odo, engine temp, clock, gear indicator and fuel range countdown once the low-fuel light displays. 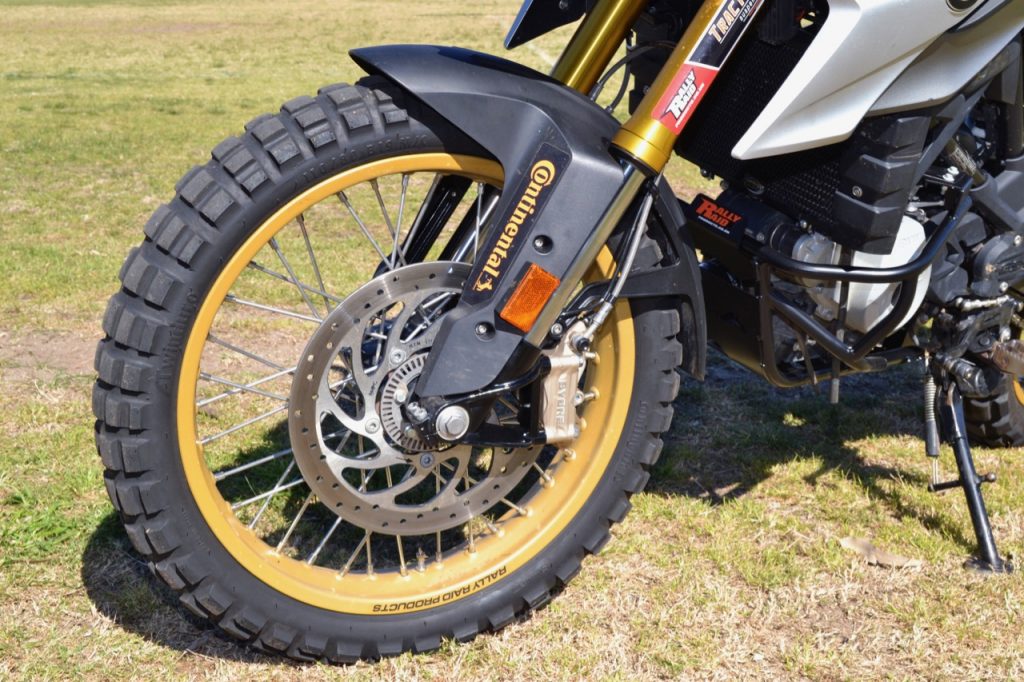 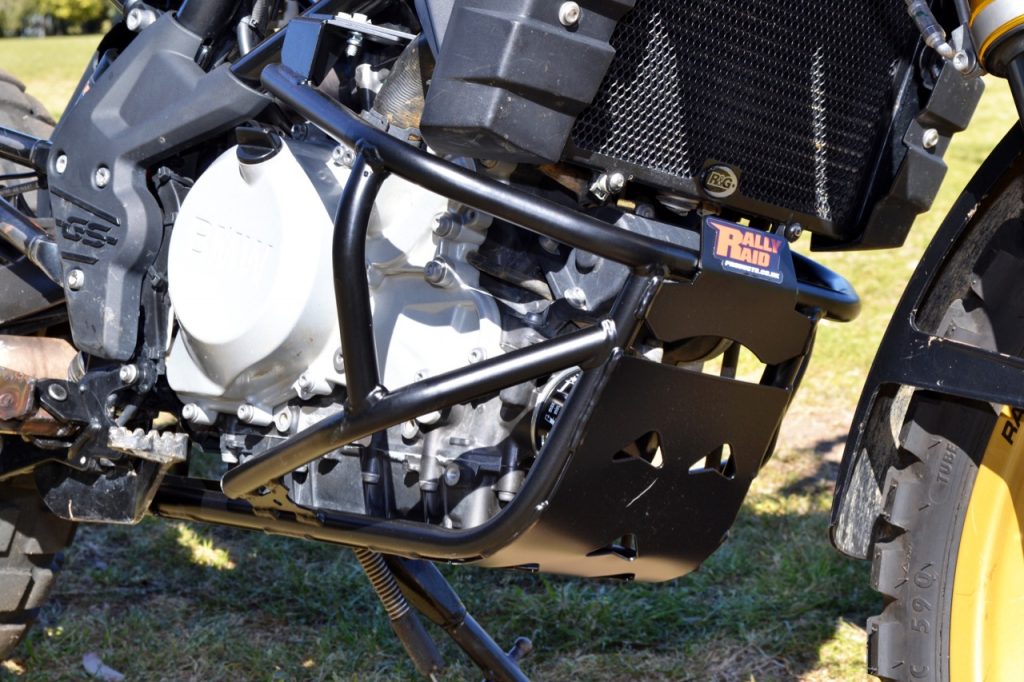 There’s no question Rally-Raid’s mods will allow riders to take the 310 GS way deeper into the dirt than the standard soft-roader. But be sure to have your credit card with you if you’re keen to take the journey.

Without an importer, Rally-Raid goodies have to be purchased from the UK and then freighted here.

If you load your online shopping cart on the www.rally-raidproducts.co.uk website with the big-ticket items such as the wire-spoked wheels, Level Two Tractive shock and fork kit, engine guard and Scorpion muffler, you’ll be investing around $4500 into the British economy. Plus freight. Plus hundreds of dollars more if you also want the ’screen, rack, footpegs, risers, ’bar clamp, Renthals, Barkbusters, radiator guard, Rotopax mount and more.

Keep punching keys on the calculator and you’ll go upwards of $12,000 once you factor in the new-bike price of $6900 plus on-roads to get the machine you see here. For that kind of money there are plenty of other adventure bike options on offer, but none of them are going to carry the BMW badge or offer the GS heritage. If those two features matter most to you, and small-bore adventure riding is your passion, rest assured Rally-Raid can help you build the ultimate G 310 GS.