There was a strange sense of familiarity when Gas Gas announced it was bringing us a tamed-down version of its two-stroke enduro bikes.

One look at the specs and marketing material for the new Gas Gas EC Ranger 300 and it was obvious the Spaniards had their crosshairs firmly locked on the Beta Xtrainer and KTM Freeride.

Like the now gargantuan SUV segment of the car world, the hybrid enduro market is growing fast, but if we wind back the clock you might remember Gas Gas has done it all before. Do you remember the Pampera 250, 400 and 450 four-strokes from the mid 2000s? Or what about the Gas Gas 200 Hobby? These bikes were trail/enduro hybrids that were creating small waves in the off-road world long before the KTM Freeride was even a sketch flying around a Mattighofen boardroom. Lower-spec suspension, lower seat, detuned engine, cheaper price, those Gassers were ahead of their time. It was a shame people didn’t really know what to make of these watered-down enduro bikes. 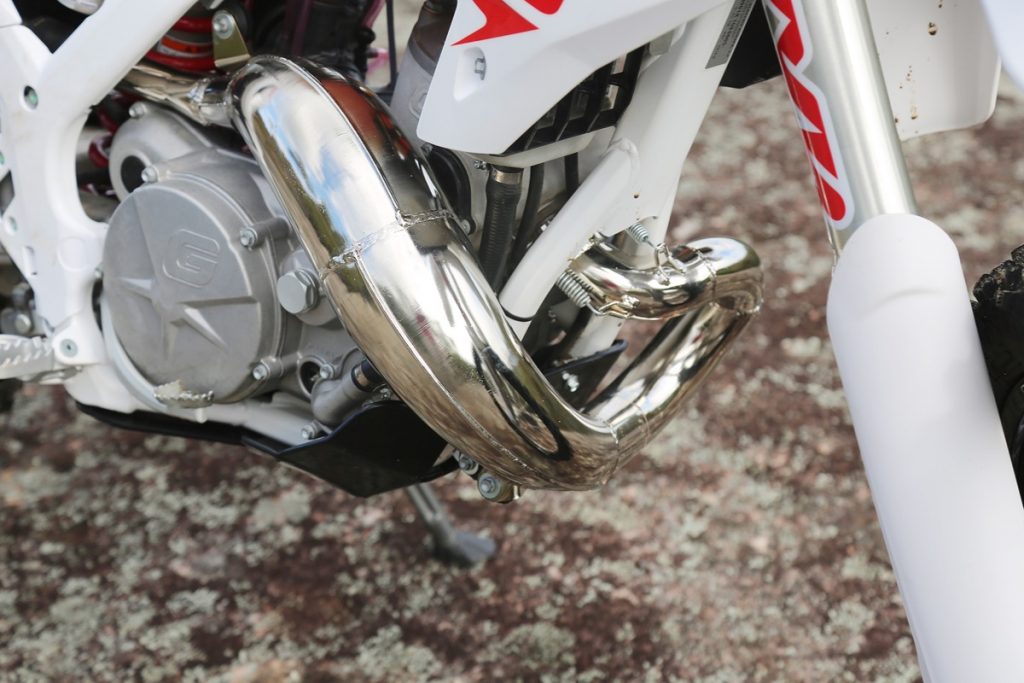 They were great for learners but most trailriders with a few months experience or a masculinity complex would just fork out the extra cash for the unadulterated enduro versions.

That was until this thing called hard enduro changed the way punters looked at trailriding. Now it’s fully acceptable to spend an entire trailride dragging your dirtbike up one hill in the pursuit of hard enduro glory. So now manufacturers are providing purpose-built equipment just for that! 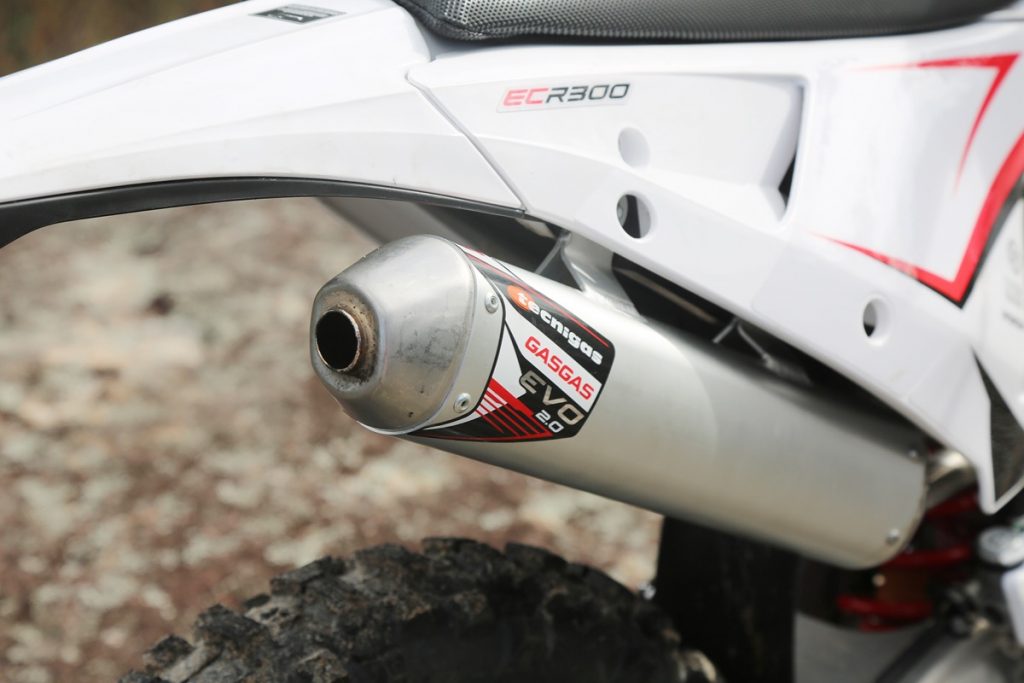 CAUSE AND EFFECT
The EC Ranger 300 is $11,490, one thousand bucks cheaper than the EC300 and this bargain price tag is down to a few key parts. The Ranger ditches the legendary 48mm KYB fork found on the EC and uses a lower-spec 46mm unit from the same firm. The Nissin brakes have been replaced with Braktec calipers from Spain with an AJP master cylinder from Portugal, the tapered handlebar is house-brand with a crossbrace, there is no kickstarter, it has a Technigas muffler and a heavier lead-acid battery.

Then Gas Gas dropped the seat height by 30mm, gave it a drinking straw for an expansion chamber, fitted a different cylinder and a lower-compression cylinder head. Everything was done in pursuit of making the Ranger user friendly and they nailed it. 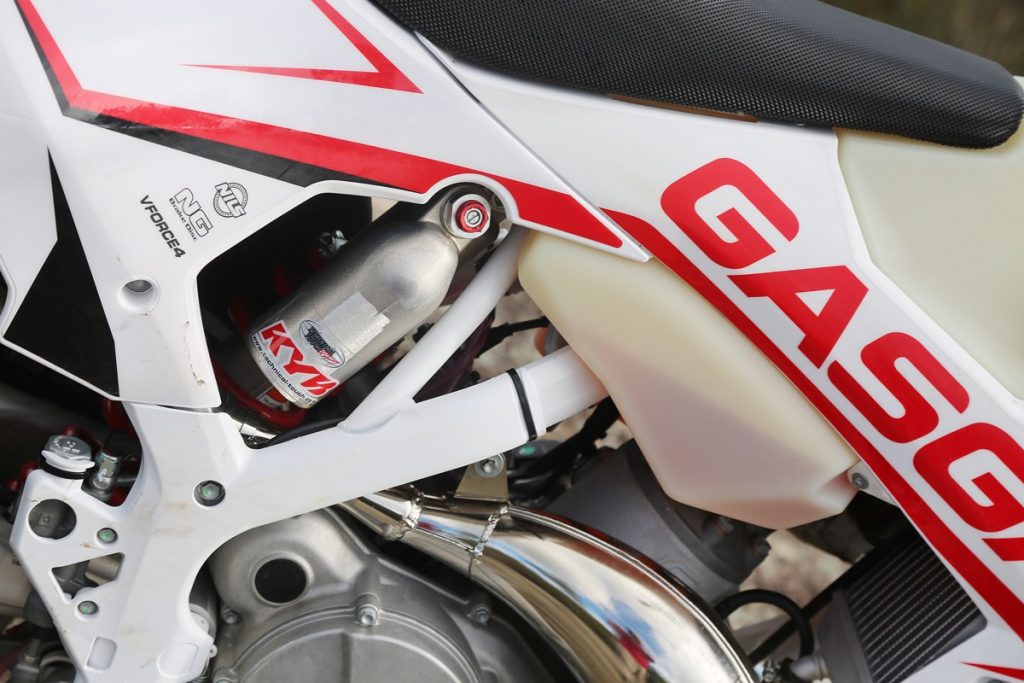 Gasser was starting with one of the best 300 two-strokes in the game when they went about building the Ranger and, even with the cheaper components, its DNA shines through. Ridden within its design parameters, the Ranger is a brilliant little bike. It’s so far from the stereotypical characteristics of a 300cc two-stroke that Gas Gas could almost just call it the Ranger and drop the “300” so as to not scare people off.

Shorter riders will probably like the seat height most but, for me, the Ranger’s engine is its biggest asset. The lower-compression head and Ranger-specific cylinder have stretched out the bottom-end and mid-range power. 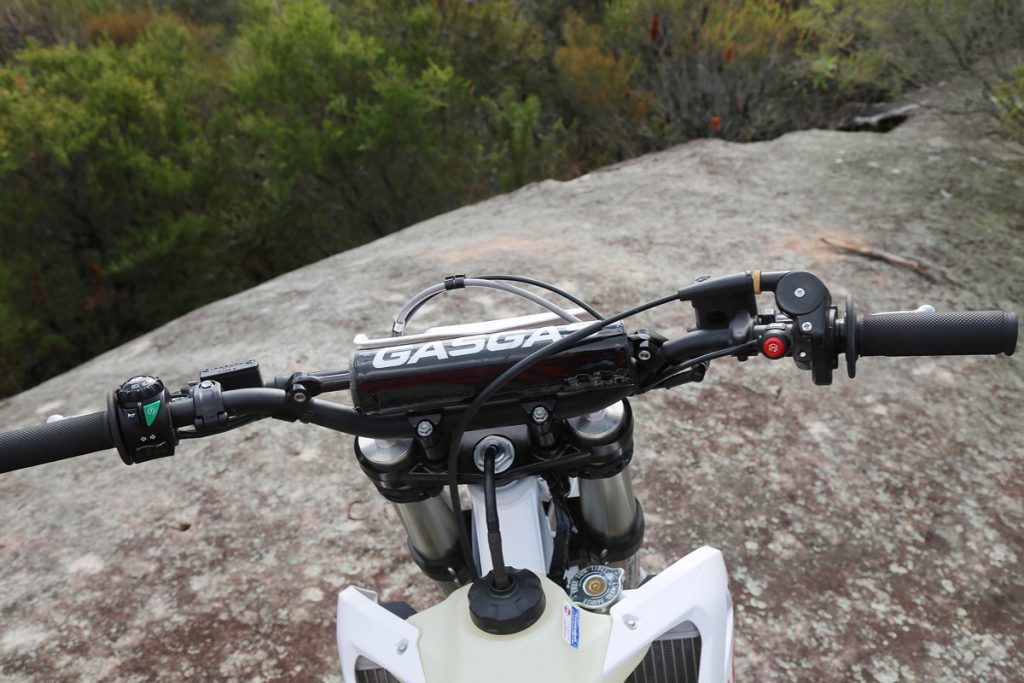 Where the EC has a meaty bottom-end, thin mid- and screaming top-end, the Ranger’s happy place is its bottom- and mid-. If you do find yourself in the top-end you’ll quickly realise that although it sounds good you won’t actually be going that fast. Gas Gas has intentionally clipped the Ranger’s wings so it can’t fly away on you.

Belting the Ranger around a sand track I tested this theory and I can confirm there’s not much going on up top. I had the throttle wide open in ways I’d never dare on the EC300 and you barely need to hold on. When I stopped playing silly buggers I went in search of some “hard enduro” terrain and quickly realised this is where it really belongs.

There is so much usable torque from the engine before it hits the powerband you’re not struggling to ride that thin line between mid-range and top-end. This is particularly useful in low-grip situations. Where my EC300 long-term test bike might lose grip for a nanosecond, allowing the engine to over-rev and the rear wheel to skip out, the Ranger is far slower to react. 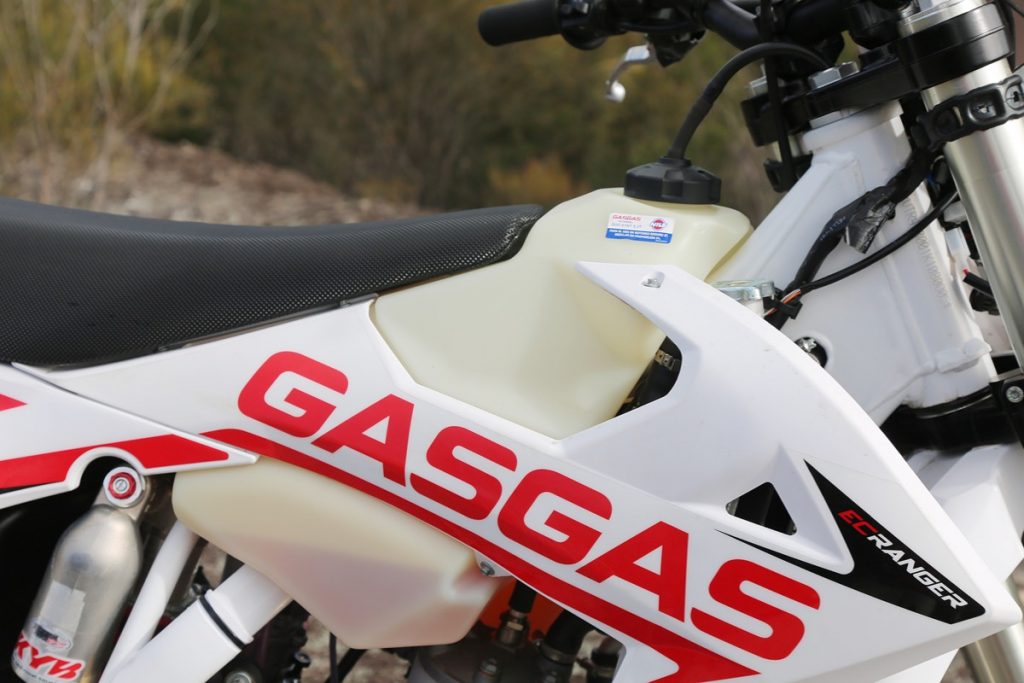 You know the feeling when you’re riding across a slippery, off-camber rock face, clenching hard as you fully expect the rear wheel to spin up at any second. The Ranger is perfect in this situation. Even starting midway up a rock face, the Ranger could gain momentum where a more peaky engine might just spin up the rear tyre.

Then when you approach a hill where you do need to give it the berries you can without feeling like you’re completely out of control. The engine will be screaming but it’s more controllable than the EC300, something newer riders will appreciate. Adding to the Ranger’s user-friendly nature is the Magura hydraulic clutch, which has a light pull. The plates copped a fare workout but I didn’t experience any fade.

THE LOW DOWN
I’m in no position to comment on the benefits of the Ranger’s low seat but, for average-height people and the Dale Johnsons of the world (vertically challenged), the 3cm Gas Gas has lowered the seat by, will be a life saver. Plus, the Ranger’s perch is well padded so there is scope to lower it even more by shaving the foam.

The low seat comes at the expense of suspension travel. The Ranger has 300mm of rear travel and 270mm out front compared to 330mm and 300mm on the EC300.

The 46mm fork will have its limitations and you can’t expect it to perform as well as the 48mm unit at speed but the EC Ranger isn’t made for desert racing. It’s made for rock hoping, hard enduro and trailriding and if you stick with that you won’t have any problems. 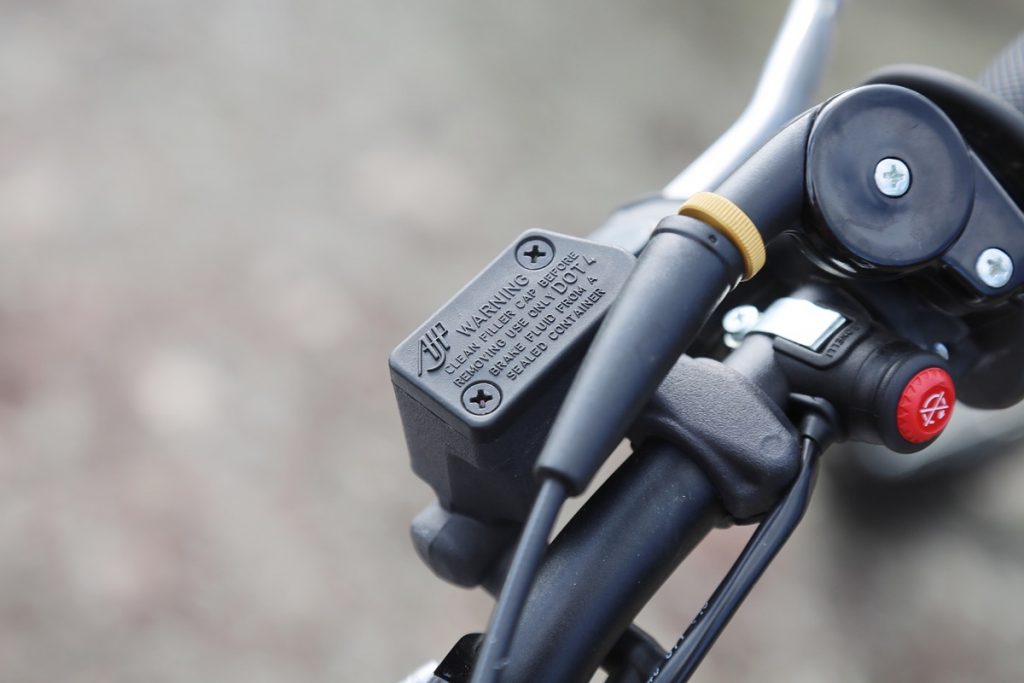 It’s softer than the 48mm KYB so it’s great in slow, rough terrain and the shock is impressive at finding grip on slippery surfaces. That’s not to say it won’t handle some grasstrack or a fang around a motocross track, because I did and it was fine. But if you’re interested in buying a Ranger you’re not buying it for its suspension, as you might the EC300, you’re buying it for the engine, seat height and to save a few bucks.

I hope more riders start to consider bikes like the Ranger as an option for trailriding but I fear it might be overlooked because, at some point over the past decade, weekend warriors got it into their heads that they needed the same bike Toby Price was winning Finke on, but that’s not always the case. There are plenty of casual trailriders who would be safer, faster and have more fun on a bike which matches their riding ability, even if they don’t want to admit it, and the Ranger is just the bike. 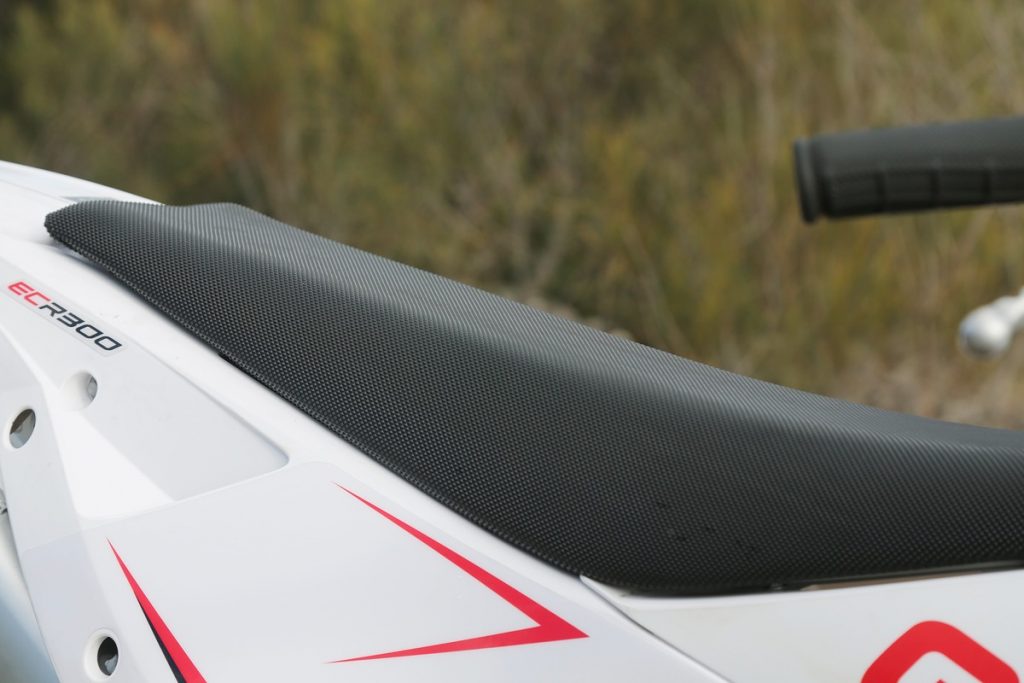 The Gas Gas EC Ranger 300 has two main competitors, the KTM Freeride 250F and the Beta Xtrainer 300. On the trials-to-enduro scale I place them like this:

The Freeride 250F (top) feels and looks the most like a trials bike. It has the smallest fuel tank at 5.5L, but it’s also the lightest at 98.5kg. It’s a purpose-built bike that mixes trials with trail and it isn’t a watered down version of an EXC. The engine is also the most docile and, given it’s a 250F, it feels the slowest by a big margin.

At the midway point between trials and enduro is the Xtrainer. Despite having a lower seat than the Freeride by 5mm (910mm) and similar 43mm fork, it feels more like an enduro bike. It’s only heavier by 500g but it has a larger tank (8.5L) and sitting on the Xtrainer feels closer to sitting on an enduro bike than the feeling you get on a Freeride, probably because the Xtrainer is based on the Beta RR300.

Then if you jump further along to the enduro end of the scale you’ll find the EC300 Ranger. With its 46mm KYB fork and higher 930mm seat, enduro riders will feel most at home on this one. It also has the biggest tank, at 10L, but it comes in almost 10kg heavier than its two rivals at 108kg dry. It’s the most capable bike of the three at speed but the others have it beat on weight.