I took on the Husqvarna FC350 as a long-termer with grand plans of racing it in the open class at the local track.

The idea was that I would get out there and mix it with the local heroes to see how the 350 would go in the predominately-450 class, a bit like Tony Cairoli used to do.

Then, once I had got comfortable on the 350 and established how I performed on that bike, I would swap it for an FC450 and go racing on that for the second half of the year to see whether my results would improve or go backwards. I spent a few weeks over Christmas getting accustomed to the 350 and before I could even line up for a race meeting we were told all sport was on hold for COVID and we had to sit at home playing Scrabble.

With people getting fined for non-essential travel I decided to obey the law and the Husky sat still for weeks. Bored out of my brain, I did what every other home owner was doing, renos. I ripped out the kitchen and built a new one, built a gym in our garage and mowed the lawn so many times it resembled a billiard table. My kids were thrilled to have Dad home so much, as was my wife. She kept handing me a list of chores that seemed to change like a page of The Daily Prophet. 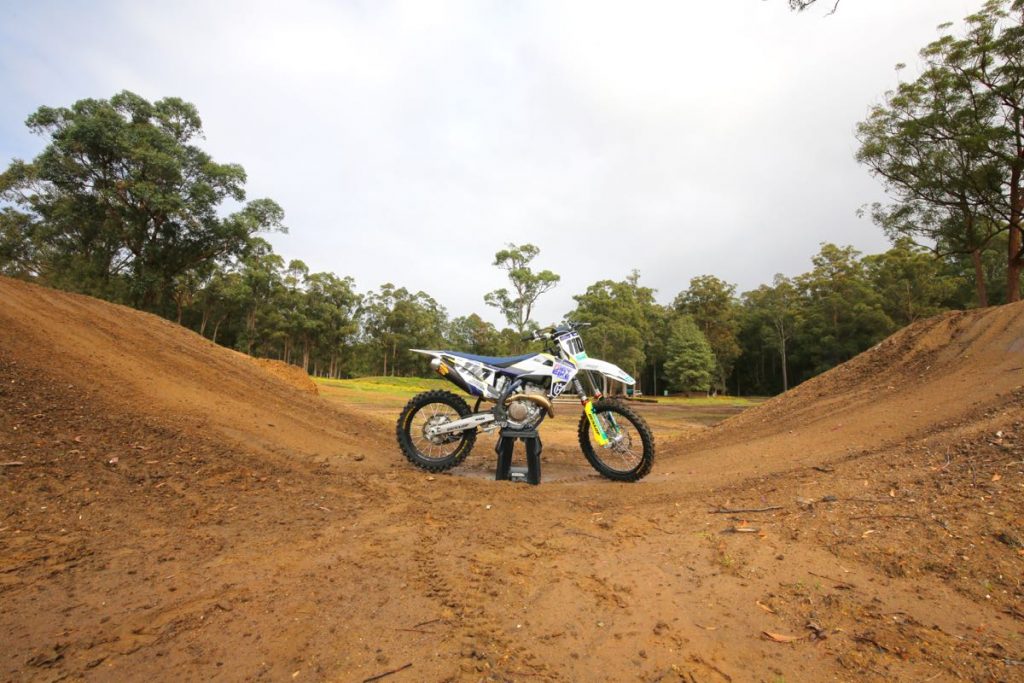 With racing on hold and all ride parks closed, I washed the Husky and gave it a service anticipating that things would start up again soon. This would have been a perfect time to carry out any maintenance or repair work but because the Husky was new and there was no need to touch it with a spanner.

Once the pandemic began to calm down and riding started up I got a few rides in on the Husky at club practice days and ride parks but, before I could line up at a startgate, COVID got excited and motorcycle clubs either closed again or limited the number of riders.

I have just 20 hours on the clock, which is a pretty sad amount of riding for 12 months by my standards. When I was racing full time I had practice bikes with 200 hours on them. I have had to accept the fact that while this year has been a terrible one I am not in this alone and I’m grateful to still have my health and my family. There will just be lots of riding to catch up on once COVID has passed. 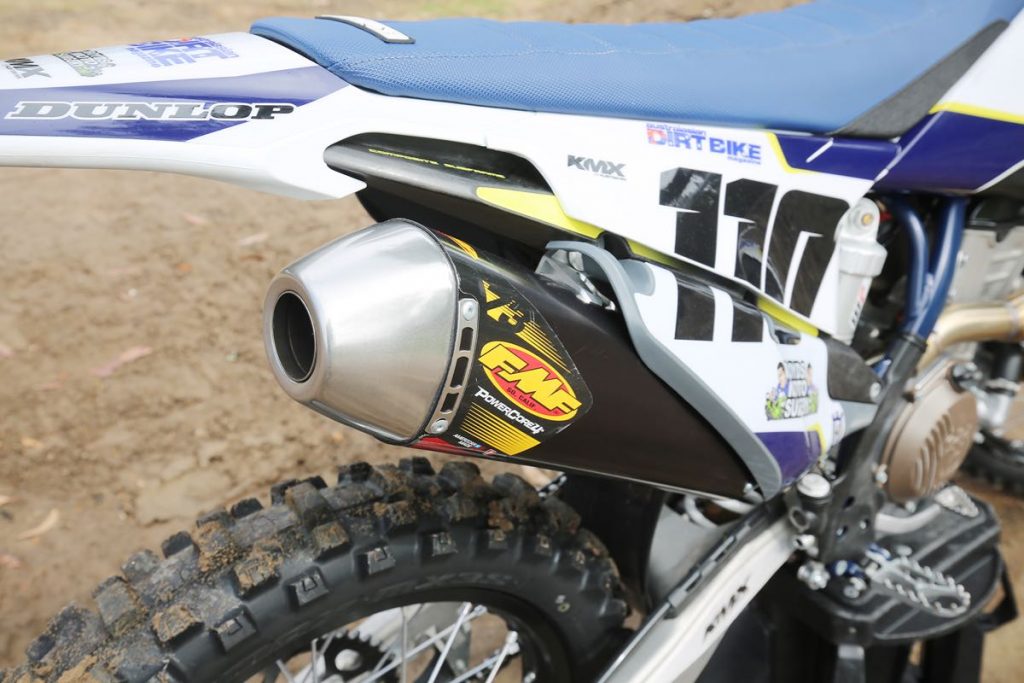 WHAT DID I DO?
The Husky got a custom sticker kit from Kustom MX. These guys nailed the design, they kept the original colourway but really made the bike standard out. The stickers were easy to fit and have lasted really well, which is exactly why we keep using these guys. To match the sticker kit, I fitted a seatcover made by Mario at Topline Upholstery. The original was really coarse, so much so that it will wear the backside out of your pants and the skin off after that. The material that Mario used is softer but very tacky. The added pleats give some extra grip and the elastic he uses makes fitting really easy.

Husqvarna supplied a slip-on FMF Power Core 4 muffler that really lifted the responsiveness of the engine. Together with the muffler I fitted the quick-turn throttle and vented airbox cover that comes with the bike, and these really lifted the overall power of the bike, especially when the aggressive map was selected. Husqvarna also supplied a holeshot button which I was intending to use when I went racing. The suspension was never apart. I played around with some clicker adjustments but then put them on the race setting listed in the owner’s manual and found this to be very good. I set the rear sag at 105mm. 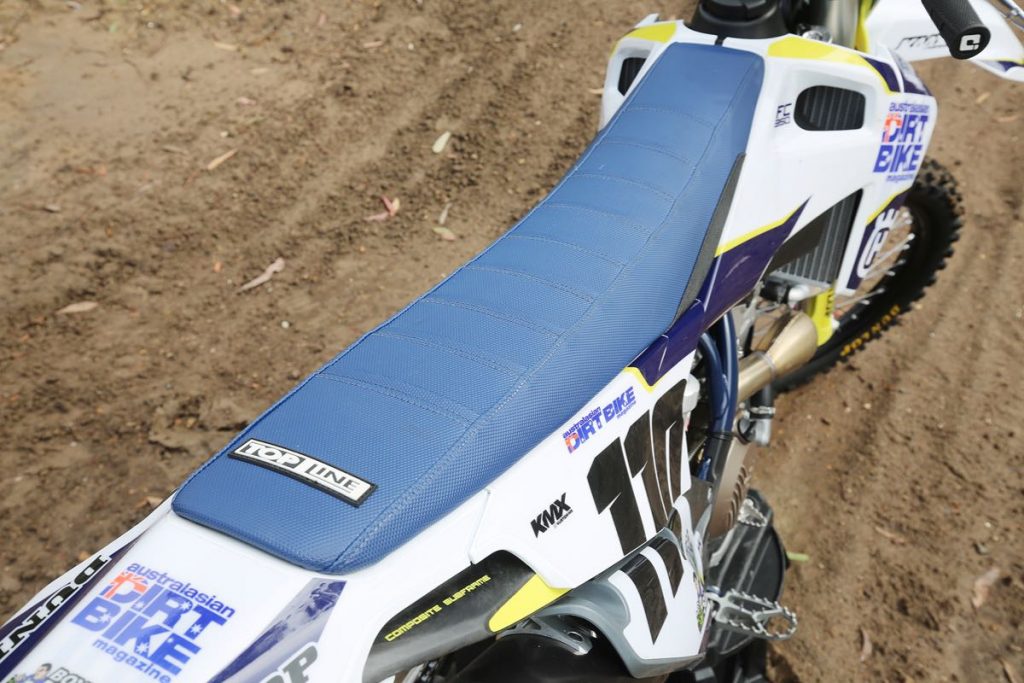 The fork pressure was dropped to 146psi from the standard 150 to allow the front to sit down better on flat turns and absorb smaller, choppy bumps better. I’m 90kg so I’m a big guy on a 350 and I still found the standard air pressure to be too high.

I found it caused the front-end to skip around on the ground a lot instead of staying planted like it did when I dropped the pressure.

On the front and rear I fitted Dunlop Geomax tyres that I ran between 12 and 14 psi, depending on the surface. These tyres worked really well on the Husky and I have been impressed with their durability and performance.

Overall I really like the way the Husky felt to ride. I might have liked to try a higher handlebar and if I had gotten the bike into some rough racing conditions then this may have prompted me to go a little stiffer on the valving but, as a package, the FC350 just works really well. 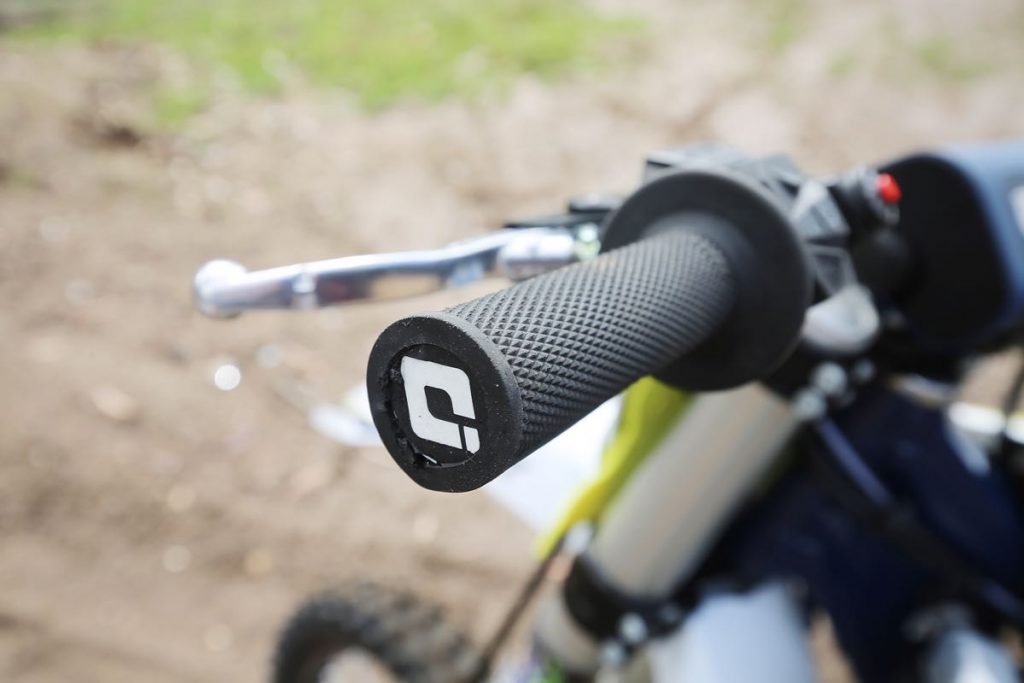 WHAT’D YA LIKE?
What most impressed me about the Husky was the power. For a 350 it has a strong power curve. It has a good hit off the bottom and continues to produce power right through the rev range. I was not expecting this and was pleasantly surprised. The other thing that impressed me was the air fork. Typically I’m not a fan because I have spent countless hours trying to get them to perform and have just had to settle for the fact that they don’t. This was not the case with the WP Xact 48. Once I dropped the pressure I found it had a predictable stroke that worked well. I also really like the fact that the Husky comes with two airbox covers, two throttle cams and two power maps. This gives you the opportunity to customize the output. If you want the power mellow then fit the closed airbox cover, smaller throttle cam and choose the less aggressive map. If you want wild power then fit the vented airbox cover, larger throttle cam and the aggressive map and off you go.

WHAT DIDN’T YA LIKE?
It’s hard for me to pick faults but one thing that I didn’t like in the beginning was the low ProTaper handlebar. I managed to get used to it but found it very low at first. The other thing that I noticed a lot with the Husky was clutch smell. I’m not a guy who is typically hard on clutches so this surprised me. After a hard ride the clutch smelt like the Black Summer bushfires. 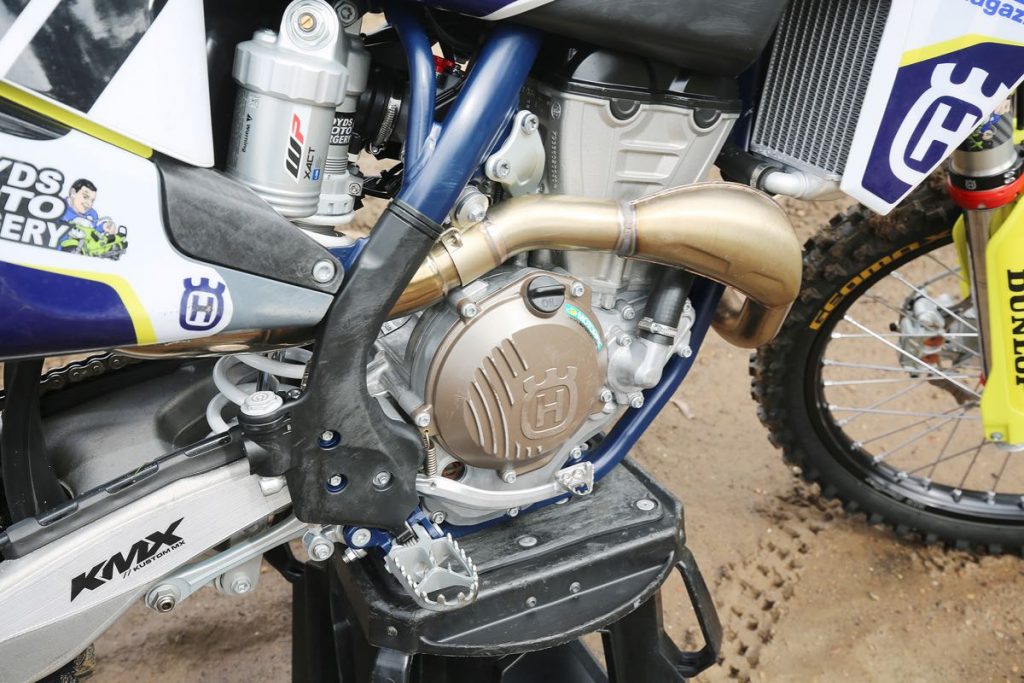 I changed the oil thinking it would be burnt but it came out clean so it’s not the oil burning, maybe it’s just the clutch running hot. After-all the clutch components on the Husky are all steel.

SIGN OFF
My time with the FC350 was really enjoyable. The plan changed and, instead of swapping to a FC450 midway through the season, I saw the year out on the 350. I did not get anywhere near the riding time we originally planned but the time I did spend on the bike was thoroughly enjoyed.

The Husky held up its end of the deal and never let me down once so for that I’m thankful. Hopefully once racing is back underway we can revisit the idea of race testing a 350 and 450 back-to-back.