When it’s time for the kids to step up from a minibike to something bigger, are they ready to master changing gears and using a clutch? Kawasaki offers a couple of options with its KLX110 and KLX110L

TO CLUTCH OR NOT…

Orlando, 10, and Luca, seven, have been riding since they were four, so they aren’t beginners, yet the clutch question is a big one. Are they ready? Am I ready? And which bike will suit their riding styles and riding terrain?

Kawasaki has made the decision both easy and hard by offering two models to choose from: the KLX110 and the KLX110L. Before they threw a leg over the KLXs I asked them what they knew about clutches and the responses ranged from “They’re what adults bikes have” to “They’re pretty hard and a bit weird”. They knew nothing.

Kawasaki says the KLX110s are designed for kids aged 13 and above. I personally tested the ‘above’ part of that statement and my 88kg were easily carted around the track and up and down a decent rocky hillclimb. That benefit to parents, having a beaut little run-around bike, is the bike’s downfall to younger kids like Luca, who at 25kg, found the suspension a too stiff.

The other issue for younger riders, like Luca, is the strength needed to change gears with a centrifugal clutch. The clutch is really a foot-operated clutch rather than an automatic clutch. The foot lifts the gear lever and, in one upward motion, the clutch is engaged, then the gear is selected. As the lever comes back down to its resting position the clutch disengages. So little kids find it hard to lever up through the heavy clutch to the gears. Luckily the 110 is a torquey engine and second gear is perfect for our track.

The first thing I noticed for Luca on the ‘L’ model was that he really struggled to reach the clutch lever; he had to roll his wrist way forward to get a good grip on it. On the bike, he was half-sitting, half-standing, his leg over the bike with one knee up as high as his belly button. I got him to practice slipping the clutch going uphill on the grass by pumping the clutch with a constant throttle and he quickly worked out the front wheel would lift with some extra revs.

Here is what the kids thought after a few days with the little green beasts. Full feature from ADB #416.

“The clutch bike, because I want to do double backflips and monos.”

“The green is pretty epic.”

Hardest think about learning the clutch?

“I was really impressed at how Luca took to the clutch. I thought it was beyond him. The ‘L’ model is too tall for him and yet he rode it really well.

“He rode quite slow compared to the KTM 50, particularly over rough ground, but his technique was perfect on the Kawasaki. If he got it wrong he crashed. He can get away with a lot more mistakes on the KTM but didn’t want to swap back to the smaller, lighter bike.

“I would buy the ‘L’ model for Luca, he is ready for it and he can change gears easily. Swapping to a shorter shock with a softer spring would sort out most of the issues. Plus he will ride it for longer before I need to buy his next bike. It’s a tough little thing too, so the resale would be great.”

“Mmm, it’s hard because I can use the clutch bike and I know I need to get better with the clutch but I can ride the other bike faster and it’s a lot easier to ride without thinking about when to pull the clutch in.”

“Well, they both have really good power, a lot more power than my bike.”

Hardest think about learning the clutch?

“It takes a long time to start off. On my bike and the other Kawasaki I just can take off really fast because I don’t have to worry about stalling.”

“I was worried if he would see the value in having the clutch rather than just an extra annoying thing to do. If he were a few years younger I would definitely get the centrifugal-clutch model. He is a bigger, stronger but more ham-fisted kid than most; he would have had no trouble with the heavy gearshifts and would benefit from focusing on his riding skills first, then his fine motor skills, such as the clutch, later.

“As a 10-year old he could ride the ‘L’ model for another year then he would be looking for a bigger bike such as the KLX140.” 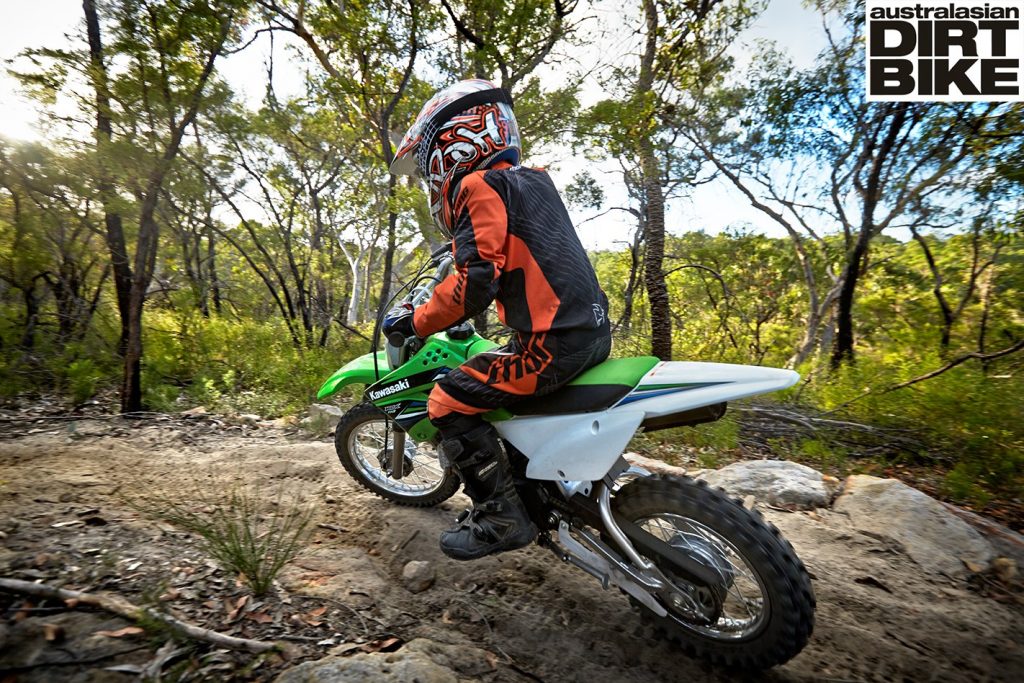 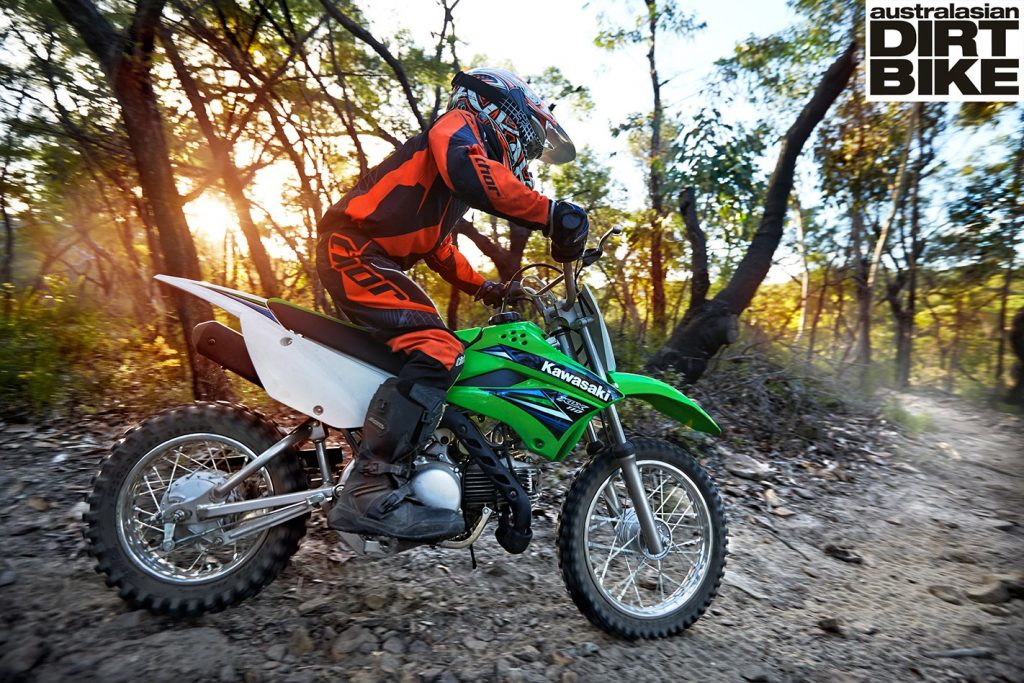 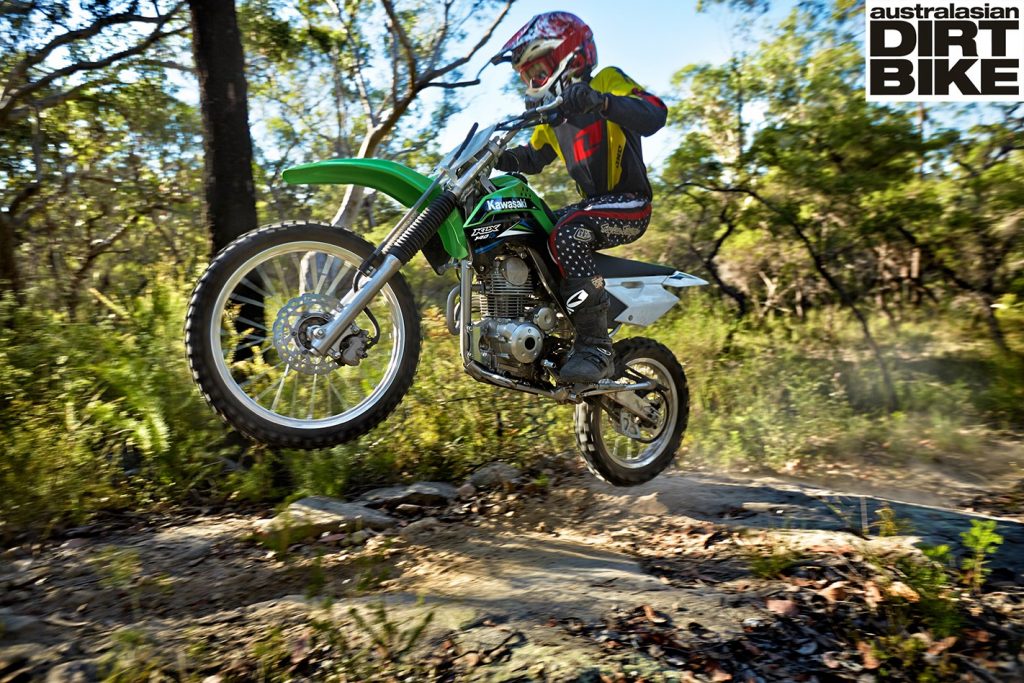 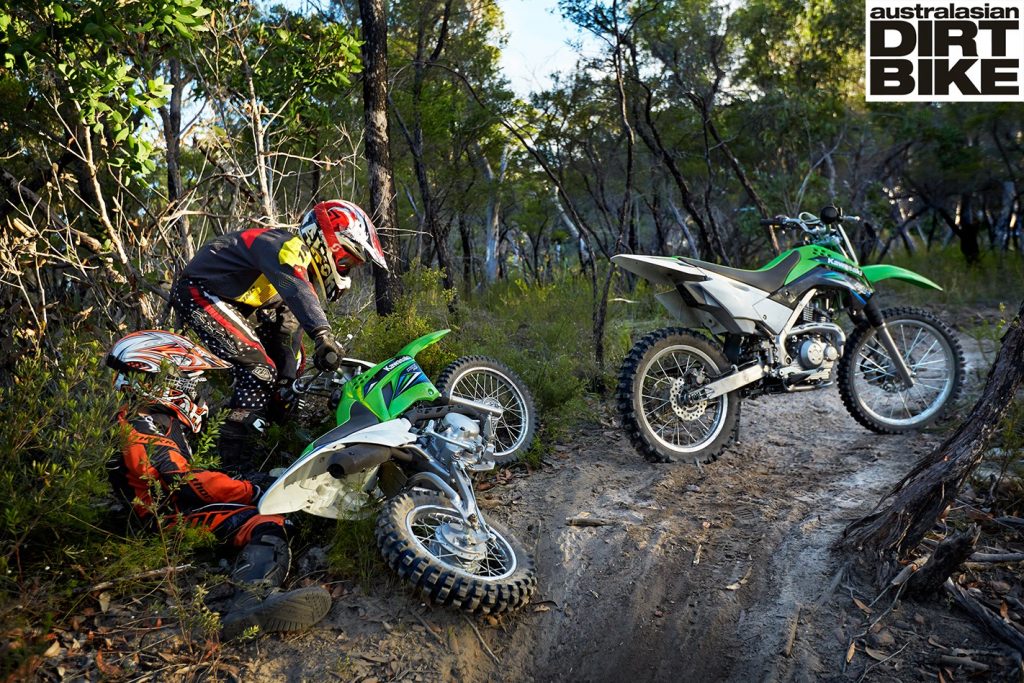 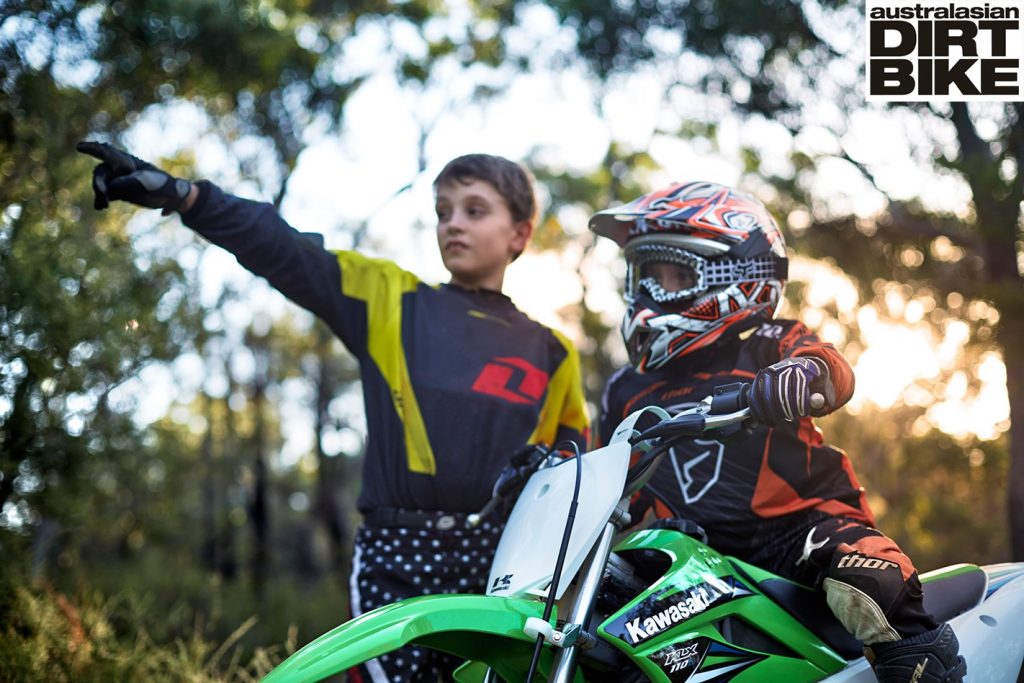 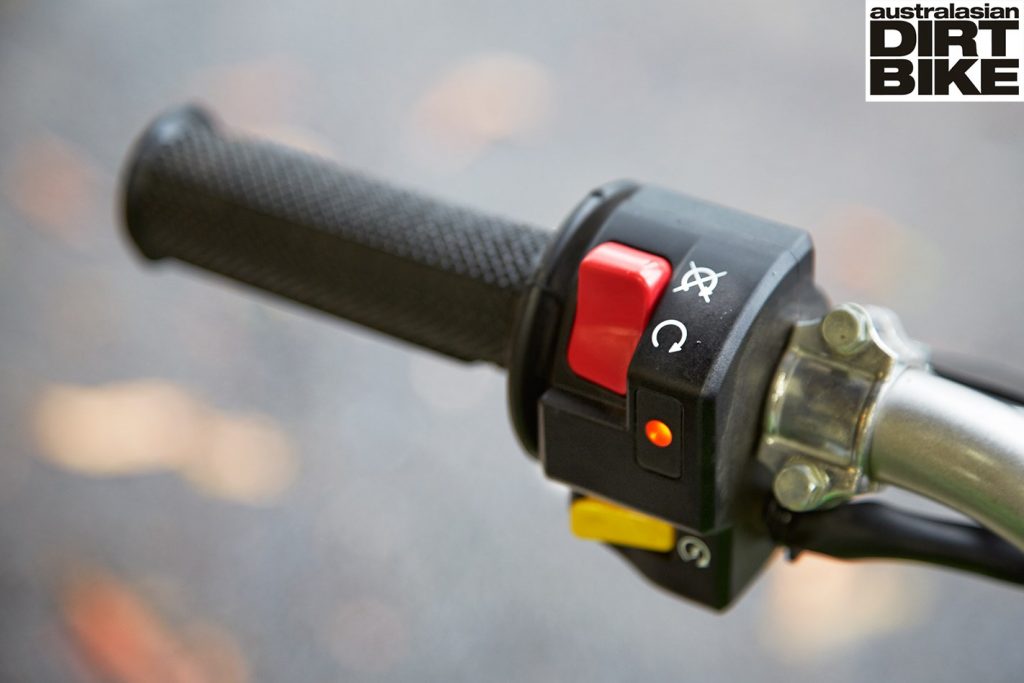 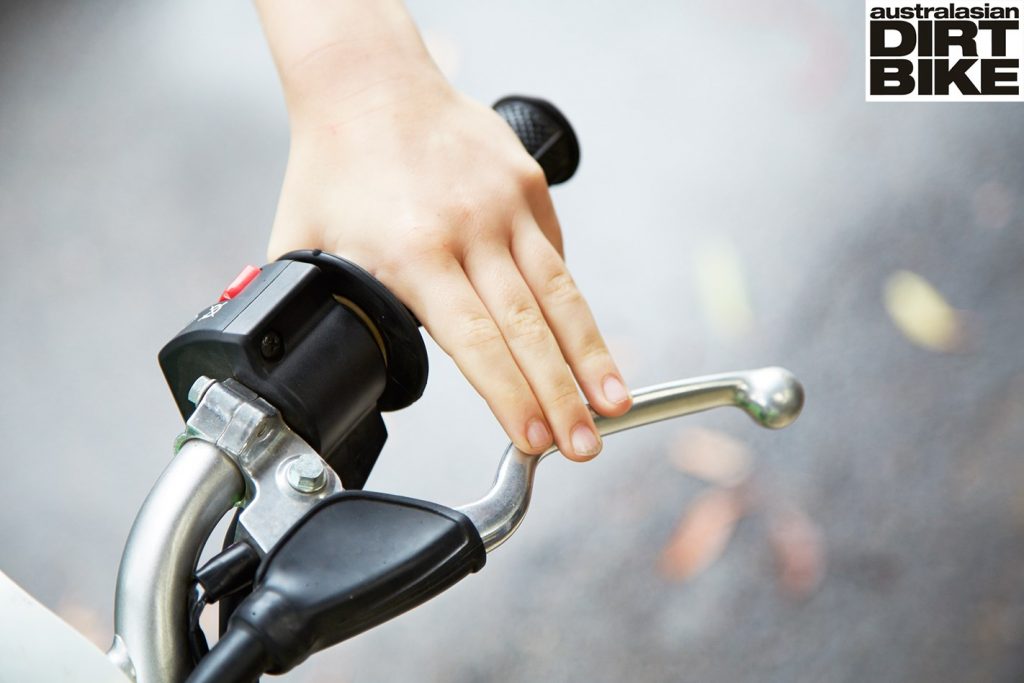 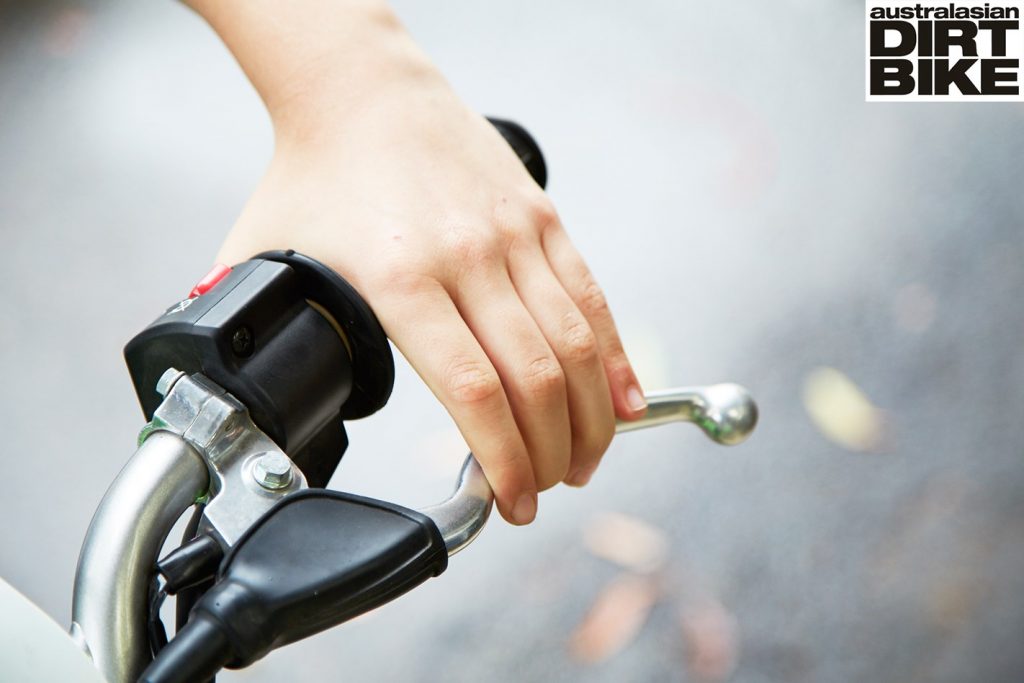