Funny how far the 350cc class has come. When KTM introduced its breakthrough offering in 2011, people weren’t sure whether it would take off.

But the KTM 350 has become one of the most popular capacities in the Austrian empire’s range.

KTM Australia knows when it’s on a good thing and has added the cross-country version to its line-up for 2017. The XC-F model has been around in the U.S. for years and has been trickling into Oz by special order but we wondered how it would fair against the trusty EXC-F.

So, what’s an XC-F? Basically, it’s a SX-F motocrosser with a bigger, 8.5L tank and 18-inch rear wheel. These two items are crucial for off-road racing. The bigger tank allows the rider to run longer in a cross country and being made of translucent plastic means you can see the level and make a decision on whether to pit or ride another lap. The 18-inch rear is a much better option for the off-road world as the terrain is more unpredictable.

Nineteen-inch motocross tyres don’t have a very high sidewall so if the track is rocky there is not as much give and a bigger chance of flat tyres. 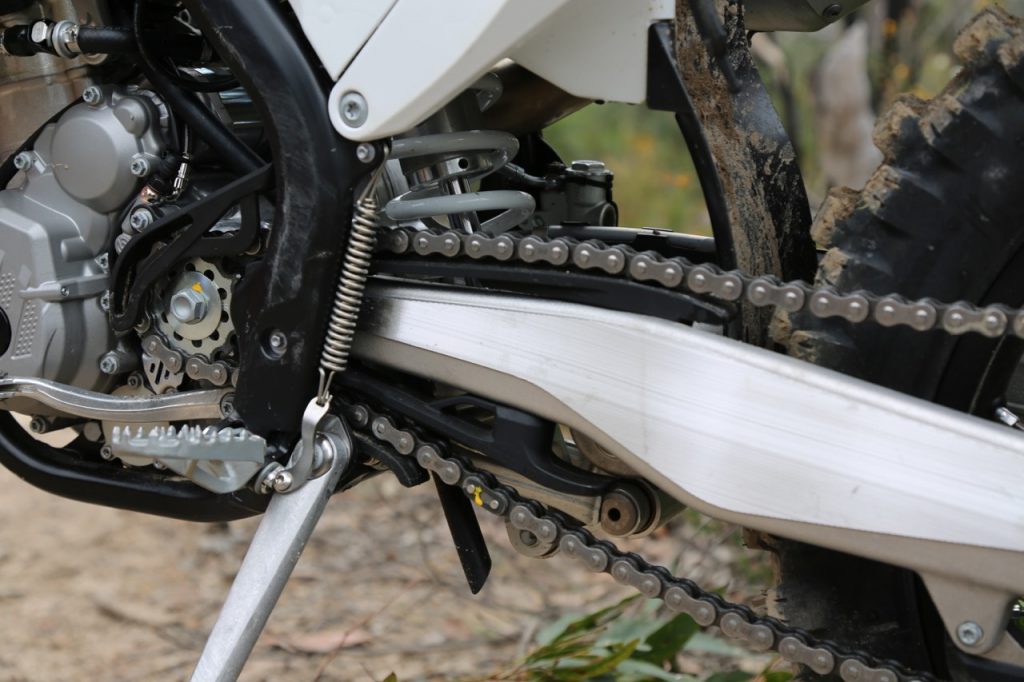 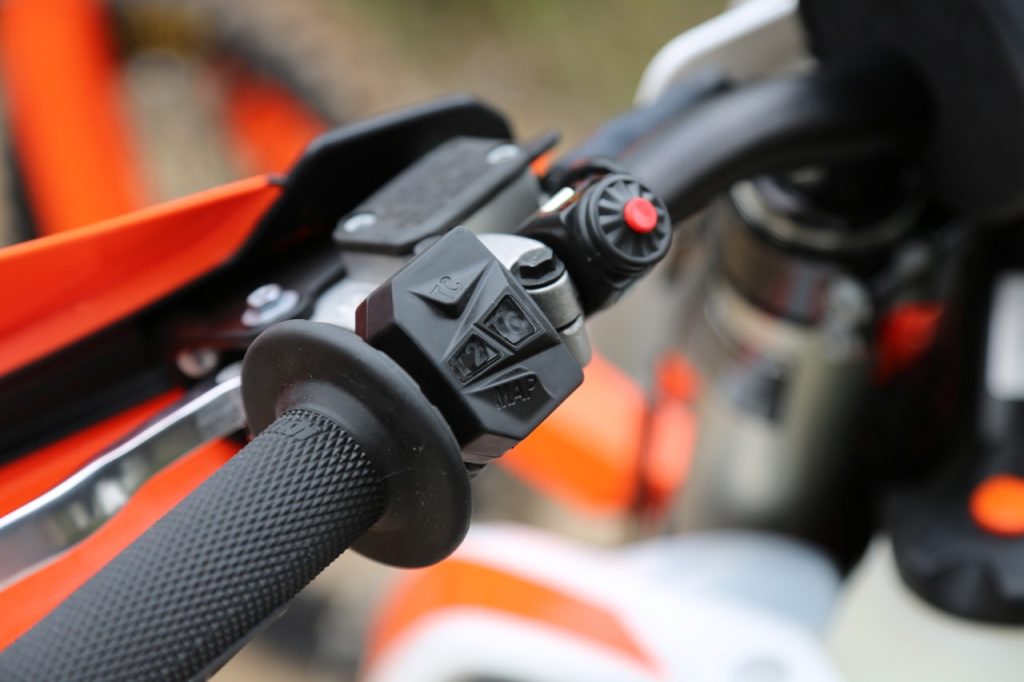 AIR FORK
For this year, the XC-F comes with the new WP air fork. I was a little sceptical at first but after a few laps, I started to enjoy it. The firmer feel makes you want to attack the track as soon as you get on it and they seem to hold up quite well over the bigger bumps and G-outs.

How they will go in a long-distance race is still a bit of a worry for me but, as far as the overall feel goes, I preferred them over the EXC fork. Another big difference between the two bikes is that the XC-F has a monoshock linkage. It is quite stiff compared the EXC and that is most noticeable over the sharp tree roots, where it dances around a little bit.

The XC-F has a super-impressive engine. I was amazed at how fast the thing is. From right off the bottom through the top end, the little KTM 350 is no weakling. I’ve raced 350s over the years and this motor is probably the fastest 350 I’ve ridden in the bush.

Thankfully, the XC-F comes standard with the new KTM map switch that has ignition settings 1, 2 and TC (traction control). Number 1 is animal mode while Map 2 is more gentle.

The only thing I had an issue with the XC-F was when riding in the slower technical stuff. At low revs, I had it ‘flame out’ and stall on me multiple times.
The 2017 version of the trusty 350EXC-F is by far the best I’ve ridden. I’ve always enjoyed riding the EXC-F but this year’s bike is even better.
I’ll start with the handling. The WP XPlor 48 fork is the latest thing to come out of the WP factory. It is soft under racing conditions but when you play around with the clickers there is a noticeable improvement. 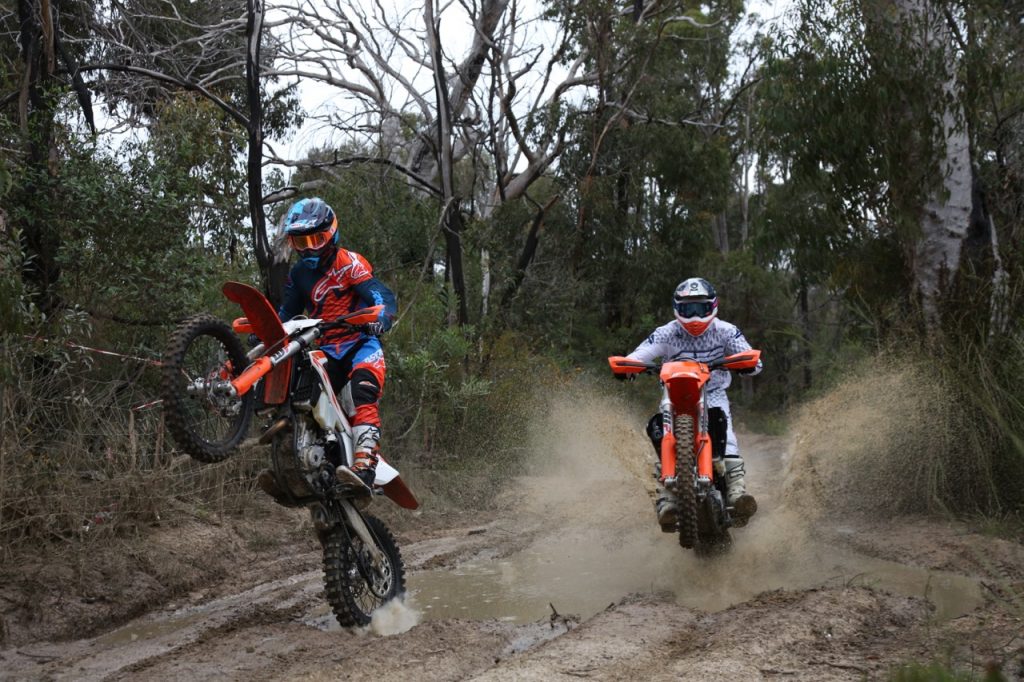 They are quite sensitive to change. I cranked up the compression and it was much better for me. Still softer than the XC-F suspension but not to the point where I was uncomfortable. Same deal for the XPlor shock. It is soft but it works.

I really like the way it drives compared to the older PDS units and I found that it didn’t pack and carry on under acceleration like in the past.
The motor is noticeably more mellow than the XC-F and, at first, I was a little disappointed. But the more I rode it, the more I got to like the power. It was just so easy to ride. Come out of the corners and just wind it on and the smooth power tracked so well and did it all without getting out of control. It was impressive. It does have a lot less bottom-end snap than the XC-F but the mid- to top- is very strong. It is a very rider-friendly motor and inspires confidence.

FASTER ONE
One question remained for us after I rode both bikes. Which one was faster? I’d felt faster on the KTM 350 XC-F straight away. It was louder, more aggressive and I just felt like I was hauling arse. The course was tight to start and then got flowy about halfway through. I took off and charged through a clean lap. Three minutes and two seconds later I was back.

I then jumped straight on the KTM 350 EXC-F and went again. I noticed the difference in power but I felt like I flowed better as the bike wasn’t as aggressive and I was making the corners easier. I flew through the finish, the time was 2min 56sec – a full six seconds faster on the EXC! Crazy huh?

I then changed the XC-F to the #2 map and off I went, 2min 57sec. Still slower. I put it down to the EXC-F being so easy to ride. I found myself overriding the XC-F and not flowing as well. It was very point-and-shoot. The EXC was mellow and I could control my flow more. I had a feeling that around our loop, the EXC was the pick and the stopwatch didn’t lie.

When word came through that I was going to test the 2020 Beta Xtrainer I had absolutely no idea what to expect.

Not a whole lot has happened since my last long-termer yarn. After the Four-Day, I had grand plans of getting plenty more seat time and doing a heap of testing and, well, it hasn’t really happened.

When Tony Cairoli won the 2010 MX1 World Motocross Championship on a KTM 350SX-F the world’s racing fans stood back in awe.