This 2018 Suzuki RM-Z450 is the first Suzuki long-termer I have had and first yellow bike since the ’97 RM80 that I used to tear around the bush on out the back of Gwandalan as a kid.

I have had the pleasure of testing many Suzukis over the years and have built many Suzuki race bikes for various people but never found myself in the racing seat. It’s definitely a welcome change and after the last few years running various capacities as long-termers I am thrilled to be stepping back up to a 450. I have enjoyed the last few years but I feel most at home on a 450.

My initial ride on the RM-Z was my first on a bike after three months of physio-therapy and rehab to mend my busted knee. While my knee felt great and didn’t give me any trouble there is always that niggling voice in the back of your head telling you to take it easy.

So I spent a few good hours cruising around a motocross track getting used to being back on a bike as well as getting to know the Suzuki. Since that first day I have got out for several rides.

I rode it all day long at the Maitland MX track for the Suzuki ride day, where potential customers got to come and sample the 2018 RM-Z machines and have even given both myself and the bike a good run around a supercross track. Now that I am familiar with the bike and have got comfortable back riding I can report on my first impressions.

The power is smooth and linear, there is nothing super aggressive about the output curve. The power is useable and easy to handle. It is still a 450cc motocross bike so I’m not calling it slow but the engine doesn’t have a great big hit off the bottom that will leave you flapping off the back, instead it is very user-friendly. 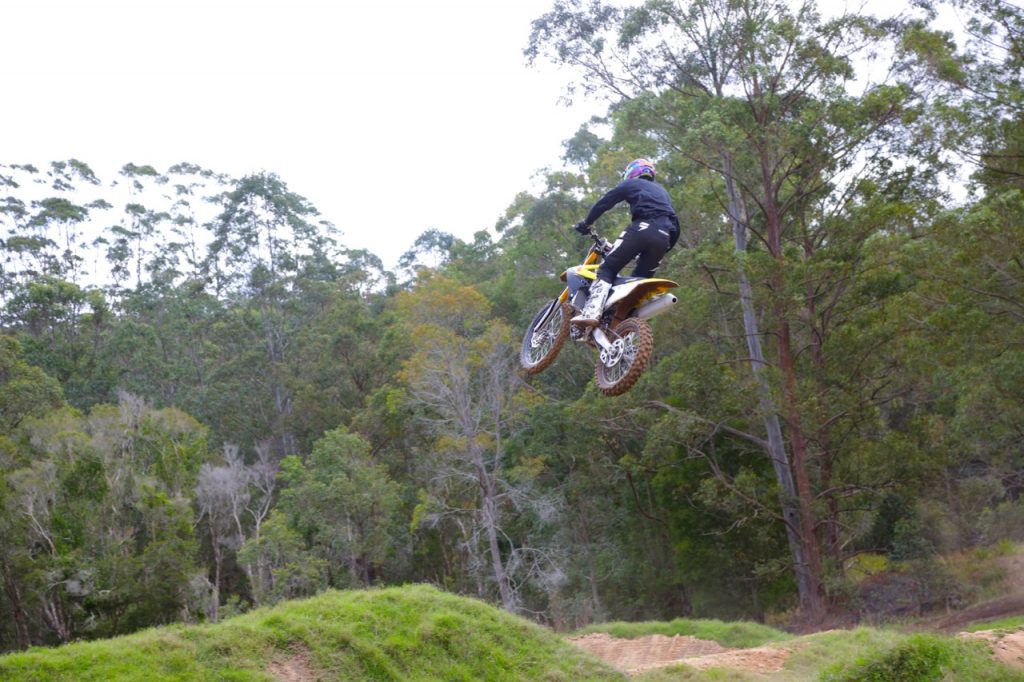 This will be a great thing for smaller riders or anyone stepping up to a 450 but I would like it to show a little more aggression and bark a little harder. I believe this engine has a lot of potential. The exhaust system is super restrictive so my plan is to change it and see how that livens up the delivery.

Suzukis have always been great-handling bikes but at first I couldn’t seem to get the RM-Z to steer correctly and couldn’t get it to sit nicely in ruts. I was trying to run a sag of 100mm and was finding the back of the bike didn’t want to squat and was sitting too high. It wouldn’t squat down and drive off the turns and the front kept trying to tuck.

What I found worked was to increase the sag to 108mm and raise the fork through the triple-clamps to give a 9mm gap from the top clamp to the top of the legs. This changed the whole geometry of the bike and made it handle completely differently.

At first the rear of the bike felt quite high but once I lowered it and raised the front the bike steered and stuck to the track just the way it was supposed to.

I also found the Showa spring-cartridge fork, while being a massive improvement over the SFF-Air TAC, to be a little too soft and the shock a little too hard.

Now that the suspension has bedded in I will go about fixing this by re-valving both ends and will get back to you next month on how it turns out. I’m looking forward to spending the next 12 months with the RM-Z, I already have a whole bunch of stuff planned for it, including some tech tips and a whole lot of riding and racing. Technical Editor Mat Boyd