THE LAST YAMAHA long termer I had was in 2010 and it was a WR450F. I was coming off a six-year-old WR450F onto my first long-term test bike and I was excited to say the least.

Eight years later and I’m still blue in the face as I gasp for air in excitement at piloting another legendary WR.

After Enduro Ed Geoff Braico kept banging on about how good this year’s WR250F was I made sure I signed up for one as soon as I could. My first impression was that not much had changed, although it is slightly narrower across the radiator shrouds and the clutch pull is lighter (don’t deny it, you always pull on the clutch lever when feeling a bike out). Oh and the wrist-snapping handguards are gone, replaced by a set of more user-friendly, motocross-style handshields.

As is always the case with WRs, starting them sometimes requires a specific recipe and, in this case, it’s no throttle. There are lines on the rubber on the right handgrip that are meant to line up with lines on the throttle housing for perfect starting, but I’ve found this freshy (I’m talking about five hours) started fine with no throttle.

Braico banged on about the torque of the latest WR250F and this has certainly improved, but I always found the more recent models to be tractors anyway. Braico also loved the firmer suspension, which is the most noticeable difference from the ‘17 model.
At 100kg with gear I will still probably opt for stiffer suspension, but it is far less WR-like than before. By that I mean the suspension feels firmer and responds best when it’s being pushed.

I’m looking forward to a long stay on the WR250F. We have plans to do a swapski with the Beta 430RR (over the page), so we have a direct comparison between the 250 and a 450. I don’t plan on doing any serious races on it, just plenty of organised trailrides, a few trail tours and, of course, our regular ADB executive staff trailrides. 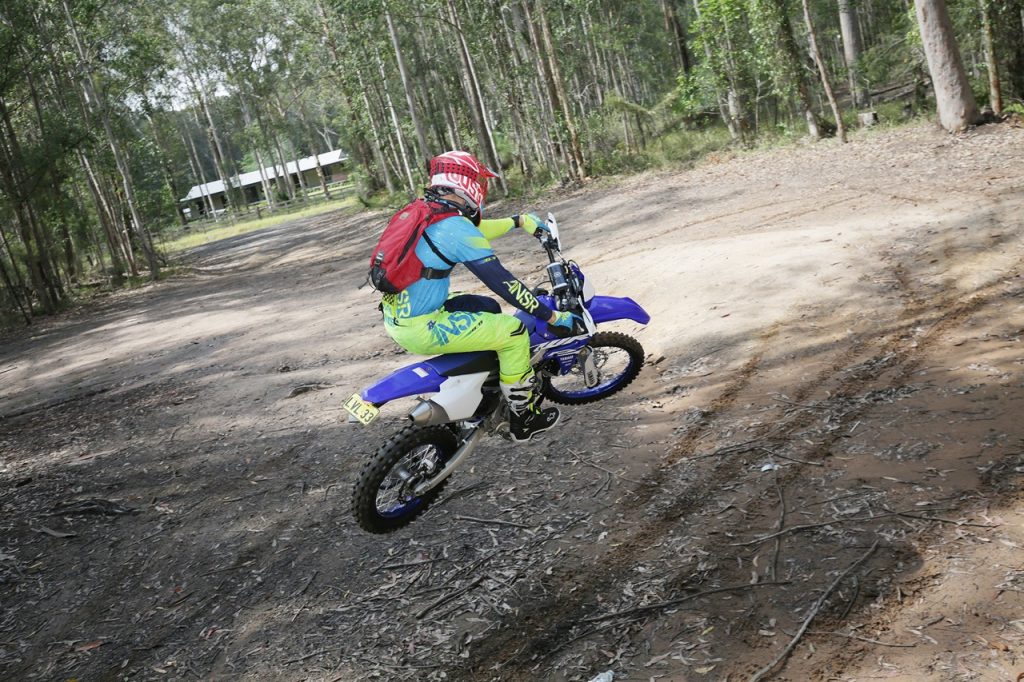 INSTANT DISMISSAL
I may only be one ride in but here are the parts I’ve referred to management for dismissal. I’m going to give them a few more rides to prove me wrong but if my mind isn’t changed they’re gooooone!
GRIPS I hadn’t had blisters for years, until I rode this bike. The stock Yamaha ones are too hard and the half-waffle pattern is not a personal favourite.
EXHAUST It may be powerful for a 250F but I’m a big lad and I’m always going to want more. GYTR does an exhaust that should give it a bunch more ponies.
LEVERS I’ve already bent the clutch lever so the agricultural stockers have to go. GYTR does a strong, tapered set of levers I’m going to swing off.
SPRINGS I think I will call in Terry Hay from Shock Treatment on this one. I assume I will need a heavier shock spring but Terry is a magician and may have other ideas. Editor Mitch Lees