The Yamaha YZ450F had a killer 2018 in Australia, with Dean Ferris absolutely dominating the MX Nationals for CDR Yamaha.

The combination of the 2018 YZ450F and the resources of the Craig Dack Racing team meant that the bike that took Ferris to his second consecutive MX1 title looked faultless all year.

While the factory KYB suspension on Ferris’s bike was far from the production set-up, the motor was a lot closer to stock than you might imagine. And you only have to take a look over the pond to see that a completely rejuvenated Justin Barcia gelled exceptionally well with his factory Yamaha YZ450F in the U.S. 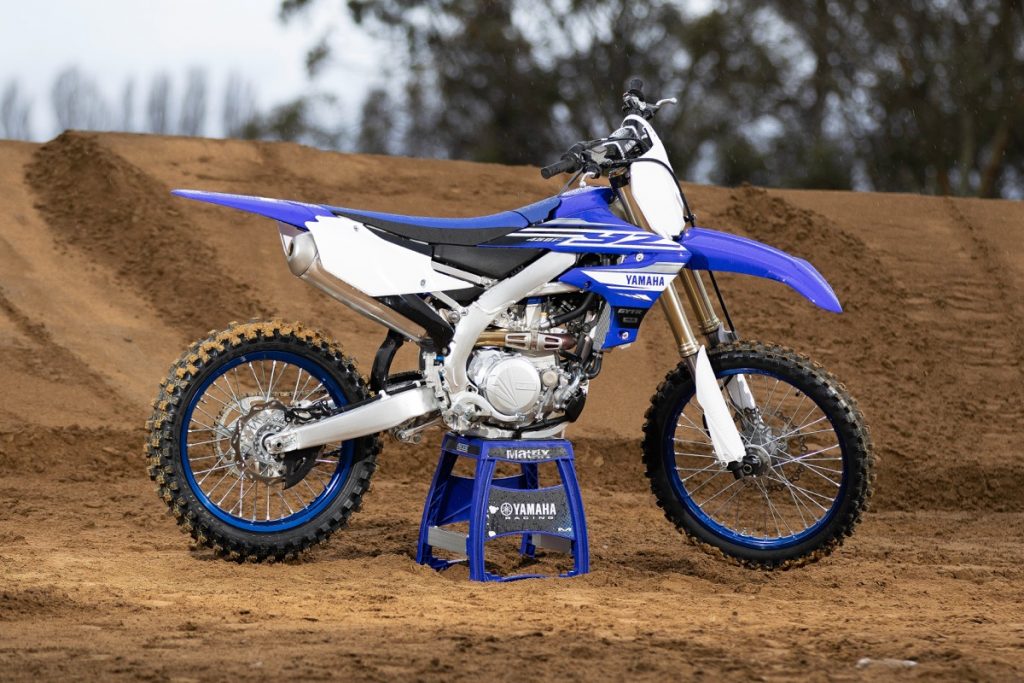 From a racing perspective we are seeing a strong resurgence from Yamaha in MX1 but the factory hasn’t changed much on its big-bore for 2019. There’s lower gearing (a 49-tooth rear sprocket instead of a 48), redesigned wheel spacers for increased rigidity, stiffer valving in the fork and shock, a blue rocker cover and firmer seat foam.

Are these changes noticeable when riding? Other than the bigger sprocket helping you to pull a taller gear through sharp turns, the changes aren’t dramatic. There is a slight improvement in handling thanks to the firmer suspension but the changes are really quite minor. Overall, the 2019 feels almost identical to the 2018. If you loved last year’s model then you will be extremely happy with Yamaha’s latest YZ450F. 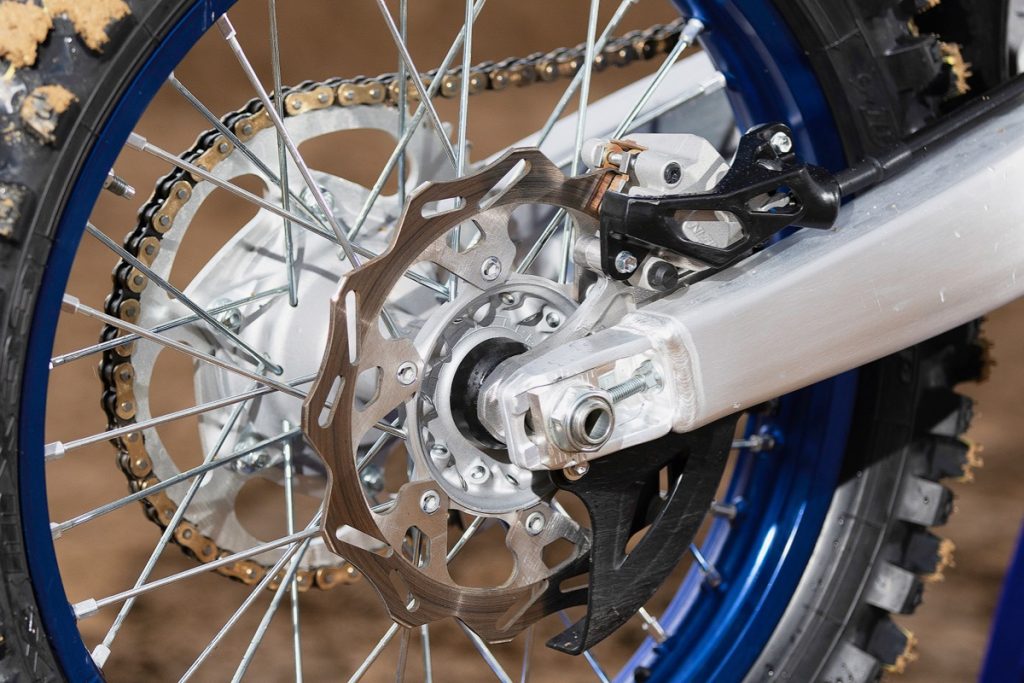 The front Nissin anchor is super impressive. With a 270mm rotor, stopping power is no problem. I found that just my index finger hovering over the lever was enough when it came time to jump on the brakes and slow for a corner.

Even on some of the downhill corner entries, where you really rely on maximum stopping power, I was never left wanting in the braking department. There was still plenty of feel in the front brake and on a couple of the hardpack corners I didn’t have any issues with it being too touchy.

Sure, if you put four fingers on the lever and grab a handful you are highly likely to go down. But anyone taking the time to be smooth and progressive applying that front brake will have no issues at all. No, they don’t quite have the stopping power of the KTM and Husqvarna’s Brembo brakes, but they are right up there with the best of
the rest.

The rear brake is right on the money. It has really good feel and the pedal is positioned nicely, tucked right up against the crankcase. I’m not one to drag my rear brake, but I know that a lot of riders like to do it so I did a few laps hard on the rear brake. It took a lot of abuse to heat it up but it still managed to work properly and resisted fading. Even with that abuse, the disc rotor didn’t turn blue from overheating and the rear brake didn’t develop the annoying squeak that is so common when dragging the back anchor. 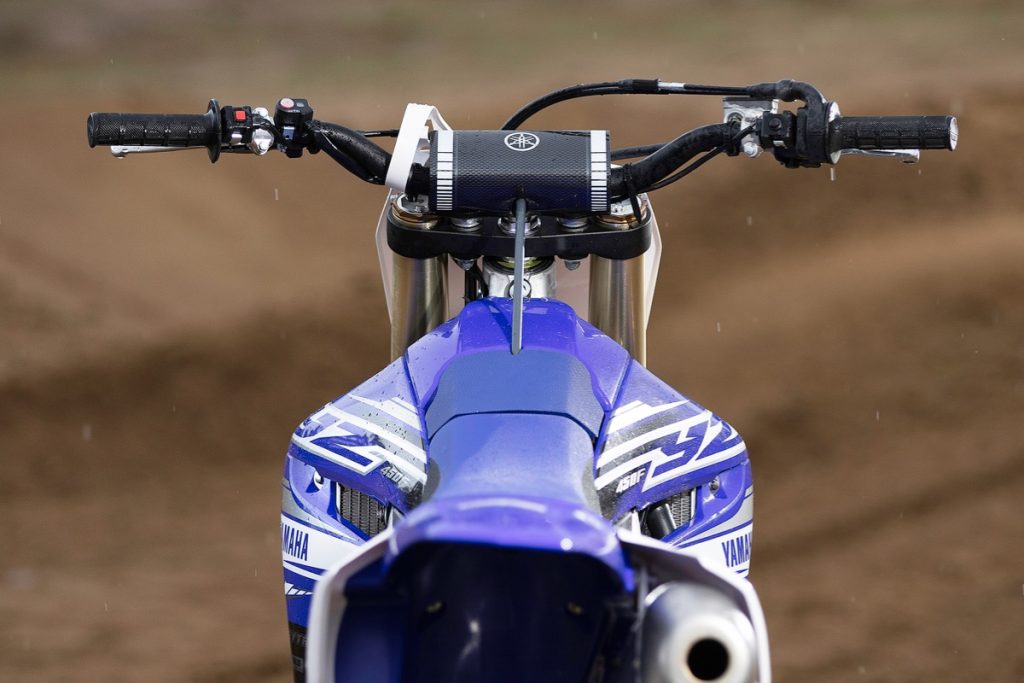 The ergonomics on the YZ450F received a major overhaul for 2018. And these changes have come through to the new model. I was not a fan of the 2016/2017 ergos and found the Yamaha to be the fattest and most uncomfortable bike for me to ride out of the whole bunch. But the changes for 2018 were fantastic and a huge step in the right direction.

The bike is flat and easy to move around on, and it is slim enough between the legs to keep everyone happy. The slightly firmer seat foam is also a breath of fresh air as you can no longer feel the seat rails when seat bouncing jumps. The only negative aspect I found in the ergos was the really high handlebar bend which Yamaha has stuck with for a second year now.

It is a relatively easy process to whip the stock ’bar off and throw on your favourite bend that will likely be a tad lower. I predict that only riders of about 180cm or above will consider keeping the standard handlebar, and even some of them may adopt a lower bend. The relationship between the seat, footpegs and ’bar is nice, other than that high bend. If you try to roll the handlebar towards you to get it a bit lower it tends to feel a bit too close to your body and makes you feel a bit cramped when seated. 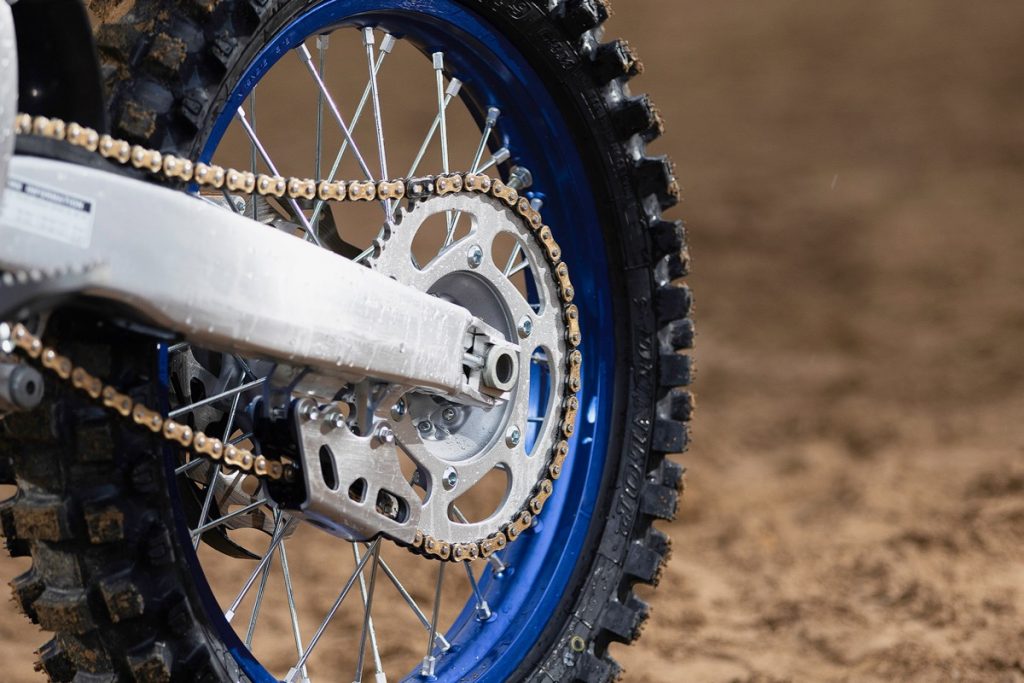 This is one of the nicest rear-ends of any of the 2019 model 450s I have ridden. The suspension package on the 2018 was nice and plush but slightly let down by a KYB monoshock that was a touch on the soft side. The bike handled well when ridden at about 80% pace, but when you stepped it up to race pace the bike seemed to pitch and step out from time to time.

The firmer valving has helped dramatically. I found that between 104 and 106mm of rider sag worked best for me (I settled on 105) and this seemed to keep the bike nicely balanced in the rear when hard on the brakes. When I first went out I ran with 102mm and the bike reacted harshly under brakes, kicking me all over the place and making me feel like I had to hang off the back to keep it balanced.

Once I came up with my final setting I was confident under brakes when entering corners. The bike would track amazingly well under acceleration when exiting corners which is without a doubt the strongest characteristic of the rear suspension. 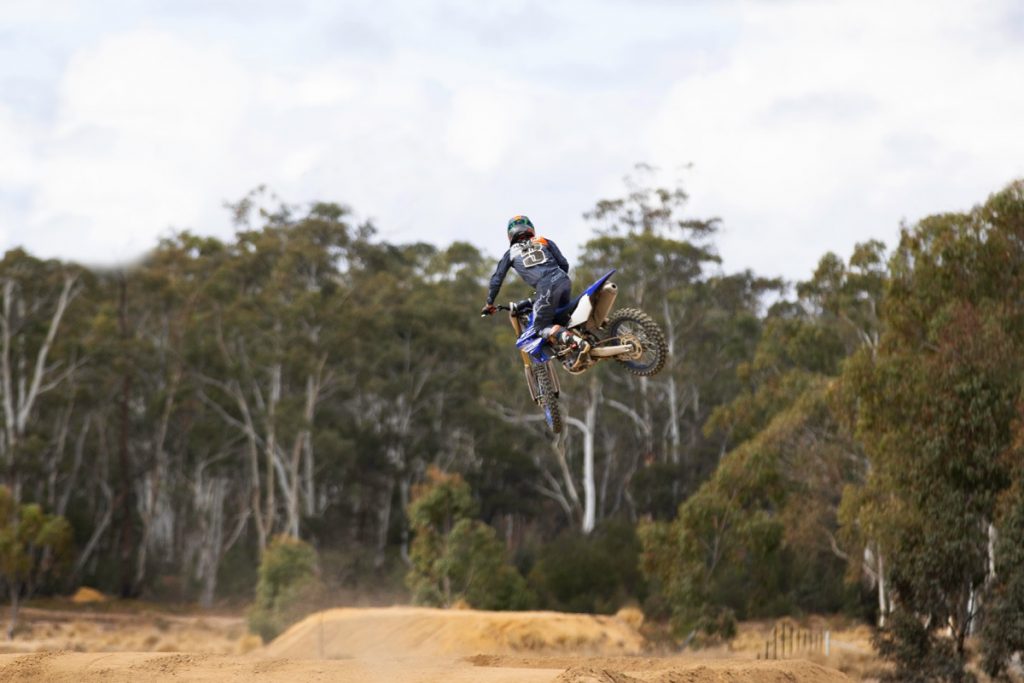 While other manufacturers have been changing their suspension almost on a yearly basis, Yamaha has stuck with the trusty KYB spring-cartridge fork for many years. For 2019 you will find essentially the same fork but with minor valving changes on the 250F and 450F. This fork is extremely predictable in all areas of the track, whether you’re charging through a rough, choppy section or finessing your way through a technical, jumpy part of the track.

The firmer valving allows you to run the compression damping out a few clicks, which takes away a bit of the initial harshness in the fork. The combination of the KYB fork and shock with their revised valving provides a firmer platform for riders to charge at race pace. The new settings feel very balanced on all parts of the track. 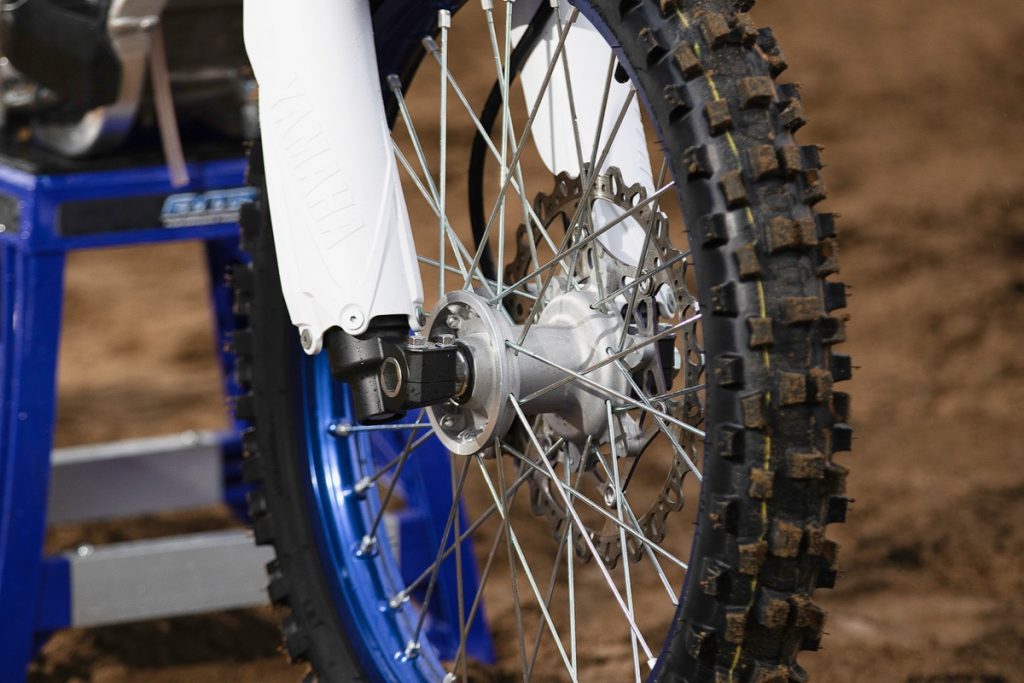 Yamaha is really on the money with its Power Tuner app that was introduced on the 2018 YZ450F. The app allows you to do all kinds of things with your Yamaha. From tailoring your fueling and mapping to keeping tabs on your servicing intervals. And while coming up with your own personalized performance map may not be everyone’s cup of tea it is exceptionally easy to download somebody else’s map that may impress you.

During our time testing the 2019 450 we tried multiple maps that were downloaded for us by the Yamaha technicians. Some worked really well and some not so much. But the ability to be able to simply link your phone to your bike via a serial code and password in a matter of seconds and then manually change a number of different characteristics of the motor and its power delivery is a very cool addition to the machine.

Without a doubt, the strongest and most impressive aspect of the 2019 bike is the engine. It has everything you could possible want from a 450 and more. It has great mid-range punch, a nice top-end over-rev and more peak horsepower than most people can handle away from the desert. But the most mind-blowing aspect of the motor is certainly its bottom-end torque.

Any decent engine builder will tell you that it is a damn sight easier to find top-end horsepower than it is to produce bottom-end torque but the 2019 Yamaha YZ450F has it in truckloads. You can lug the bike through even the tightest of turns in third gear which makes riding not only fun, but a hell of a lot easier. Not to mention the fact that you don’t need to change gear so often, which is safer and saves energy. Your bike will handle a lot better when it pulls a taller gear as well, especially under hard acceleration when the track roughens up. This motor is one of my favourite all-time 450 engines and will be equally as happy on a supercross track as it is on an outdoor track, due to its massive torque. 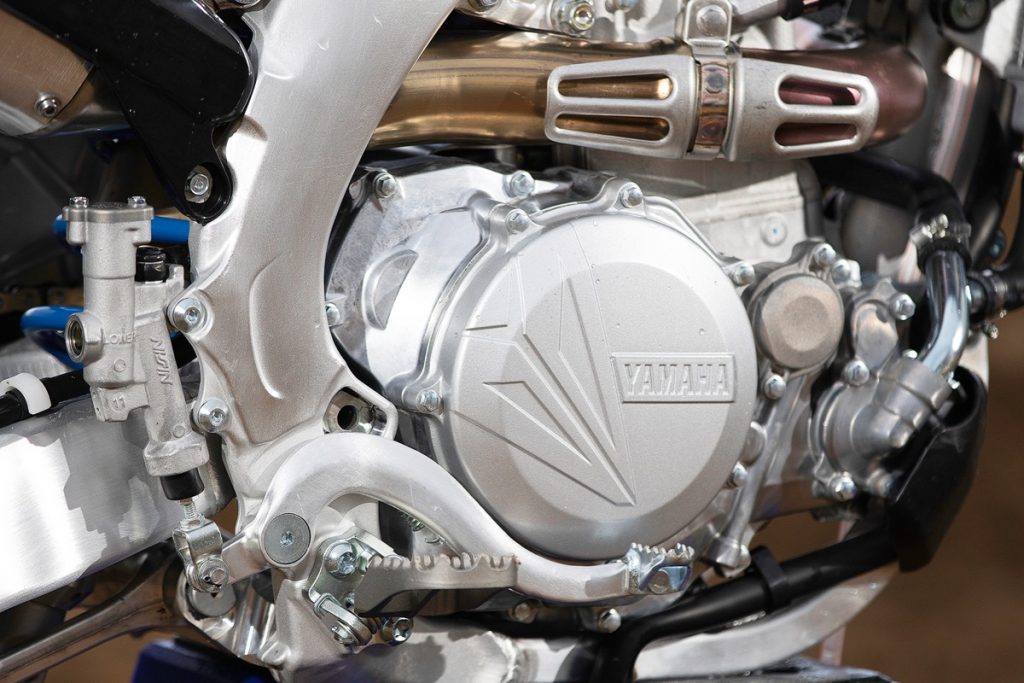 WHAT WOULD I CHANGE?

While most of the stuff I would change on this bike is relatively minor and inexpensive to fix, the main thing I’d like to manipulate a bit is not so easy to change. My pet hate with the YZ450F in 2016 and 2017 was the chassis. The bike felt top heavy and needed to be forced into a turn if you wanted to change direction in a hurry.

While the 2018 and 2019 chassis is much better it is still, in my opinion, a slight let down. The chassis is still a bit reluctant to tip into turns compared to some of its competitors and it does have a slightly heavier feel to it when quickly changing direction. The issue is, however, reduced by one of the best engines in the business and slightly firmer suspension, which prevents some of the wallowing that we have seen in previous models.

Other than some slight tweaks to the chassis, I’d really only be in a rush to go change the handlebar and horrendous standard waffle handgrips which will tear your hands apart in a few laps. The standard clutch and front brake levers are nice and comfortable while the production footpegs are wide enough and sharp enough to do the trick.

The stock Nissin brakes work a treat and even the standard exhaust system gives the bike a nice note while complementing the awesome motor. The seatcover is grippy enough to hold you in place and the blue rims that have carried over from 2018 give a nice finishing touch to the bike. Other than that, the 2019 YZ450F is a race-ready machine that will be more than competitive on the track.