When I got the call from above to do the Two-Stroke Cup I said yes before I’d even thought about what was involved.

It was like instinct, my petrol-head subconscious just responding to those first two words. Suddenly I was faced with the onerous task of deciding what I was going to ride – 125, 250 or 500, and what brand? Well at 85kg I’m too big to be competitive on a 125, so that ruled them out. No manufacturers are making 500cc two-stroke motocrossers anymore and people who own them aren’t all that keen on having them thrashed around a track, so that ruled them out. This left me with the 250 class and the choice was pretty simple for me. I raced a Yamaha YZ250 as a 16-year-old and since then Yamaha has improved the suspension and chassis drastically. I’ve been able to test many two-strokes over the years and the YZ has always felt somewhat like home.

I felt the power was competitive and was only going to improve with the addition of the GYTR race kit that comes with the bike. The suspension is among the firmest while still being smooth and really well balanced in stock form. 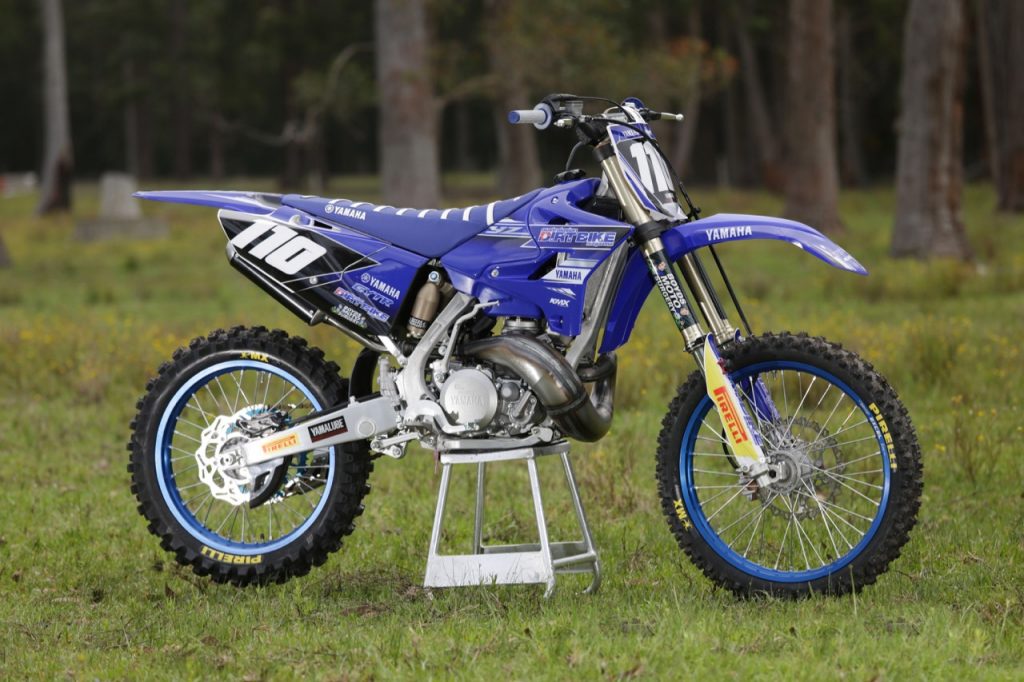 With minimal changes required to make the Yamaha YZ250 competitive, the blue machine was an obvious choice. But, I only had a few weeks to do some testing, get comfortable and sort out my wardrobe. Time to start shaking fuel drums, sniffing premix and throwing it back to the ’90s.

I decided I would run a set of Pirelli Scorpion MX32s with an 80/100-21 on the front and a 110/90-19 on the rear. Initially I was running a Mid/Soft on the front and Mid/Hard on the rear and this combination worked really well but remembering that Mt Kembla has a lot of soft woodchips down the bottom as well as hardpack, shiny sections towards the top of the hill, plus a concrete starting gate, I decided I would be best to run the Mid/Softs front and rear. 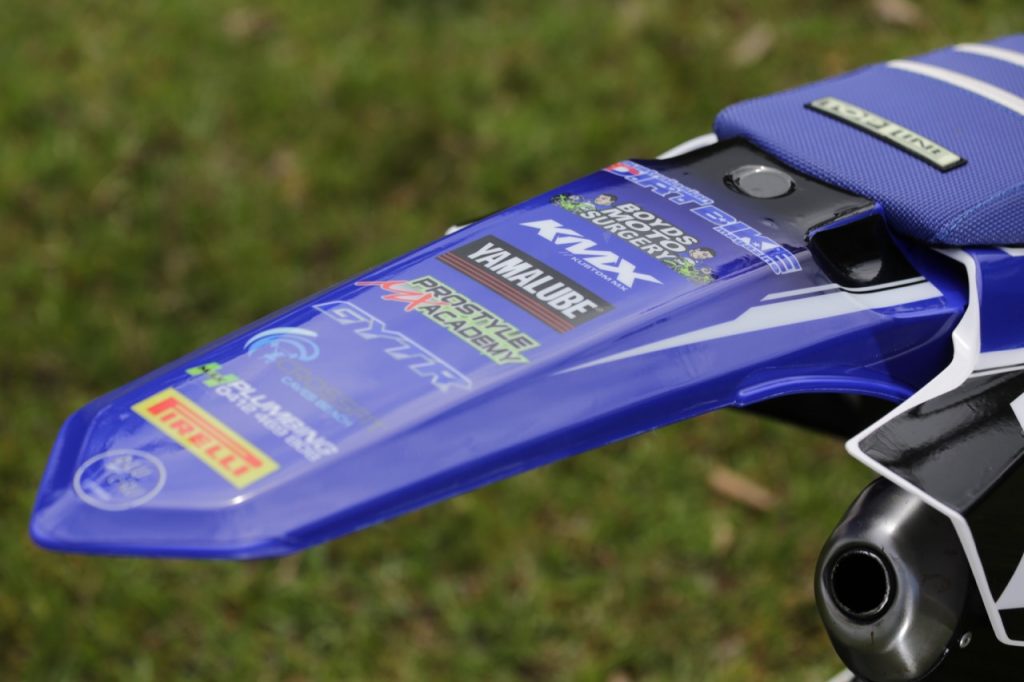 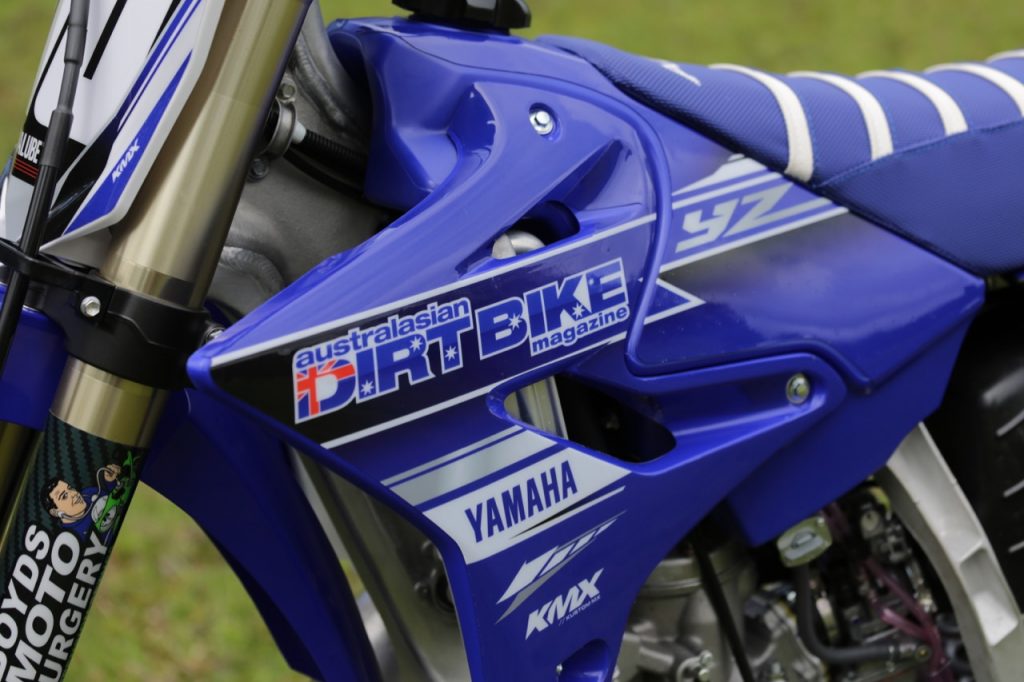 COCKPIT
I felt comfortable with the standard handlebar and levers so I just adjusted them into a position that I was happy with but I ditched Yamaha’s old favourite half-waffle ’grips because they were too hard and looked like they were made from the same rubber as the tyres. I fitted a set of blue dual-compound Renthal grips that were much softer and a little easier on the hands.

The Yamaha YZ250 comes with a gripy seatcover that works quite well but I decided to use a custom cover from our mate Mario at Topline Upholstery in Seaford, Vicco. Mario’s seats are top quality and the extra grip you get from them is nothing short of amazing.

ENGINE BAY
Down in the engine bay, the motor was stock as a rock. I changed the sparkplug right before the event just to make sure the bike was running right and that was it. The exhaust system I fitted was the GYTR system made by HGS Exhausts that comes with the bike. The pipe is a full system of an expansion chamber and silencer.

The muffler is anodised black and is virtually maintenance free but the works-look chamber is bare metal and needs a good rub with some steel wool every time you wash the bike and a coating of silicone spray to stop it rusting. 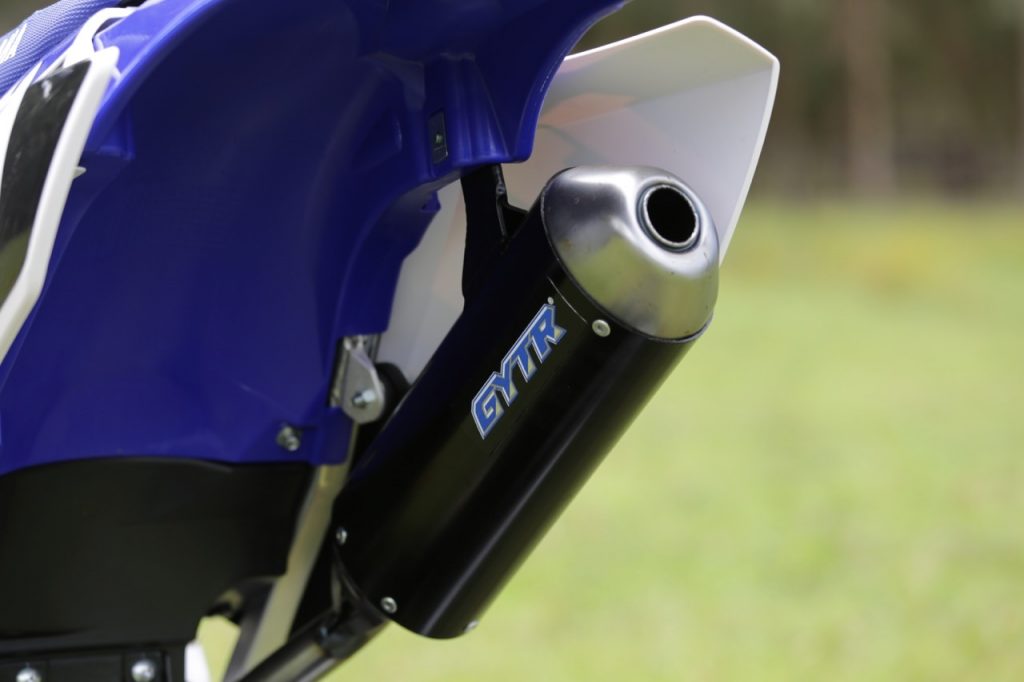 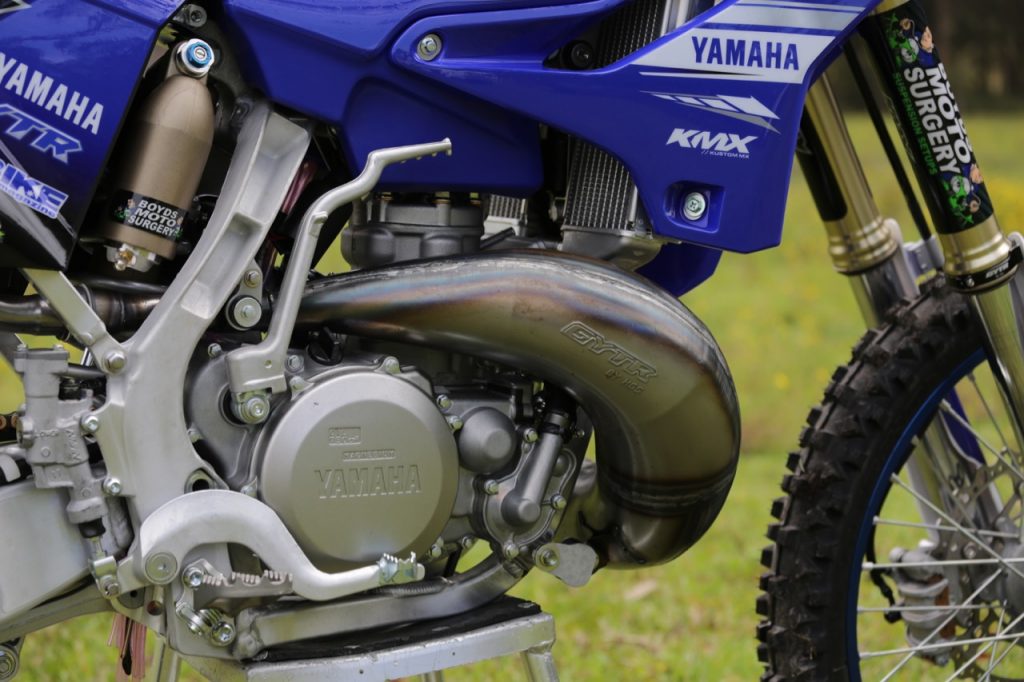 The air filter I used was the stocker but I was oiling it with Yamalube filter oil and using Yamalube transmission oil in the gearbox, seeing as how it was a Yamaha and all. I did play around with the jetting to get the engine nice and crisp and ended up pairing a needle given to me by Yamaha tech guru Darren (Thommo) Thompson that was used back when the pros were racing two-strokes.

It doesn’t come up on the Yamaha parts list but I can promise you it does exist. The number of the needle is N3CG and I ran it on clip position two with a #48 pilot jet, a #185 main and the mixture screw set at two turns from all the way in. This made the bike run super clean while still having plenty of fuel up high in the rev range.

GETTING SPRUNG
The stock suspension was my main reason for deciding to ride the Yamaha YZ250. I thought it was my best chance of getting a setup I liked quickly and easily. The YZ comes with the KYB speed-sensitive, spring-cartridge forks and a KYB monoshock.

The fork is the same as the one Yamaha is using in its 250F and 450F range of motocross and enduro bikes and has been in production since 2005 with just a few small refinements.
It is sturdy and offers plenty of adjustment to get a setting that works really well. While I knew the spring rates would be okay front and rear I expected to have to wind the compression clickers in a few turns to firm it up for when the track got rough. 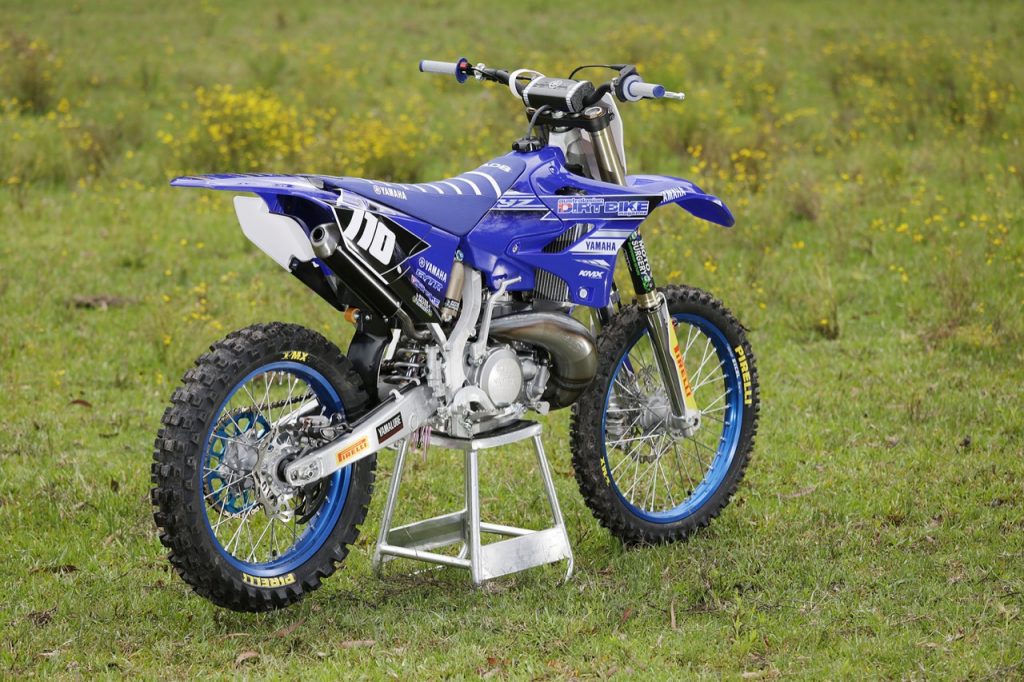 I had the compression wound in to six clicks both front and rear but I also added half a turn to the high-speed compression adjuster on the shock and adjusted the spring preload to get a rear sag height of 100mm. I also fitted the GYTR holeshot button that comes with the bike to help keep the front wheel down off the start line.

The gearing I ran was the stock 14-tooth front sprocket but I used the blue-anodised GYTR 50-tooth rear sprocket that comes in the box. I linked them using a trusty gold, heavy-duty DID chain.

SHOW AND SHINE
The custom graphics kit came from Kustom MX. These guys absolutely nailed the look I was going for. I wanted to keep the standard YZ colours but just flair it up a little. They took an already good-looking bike and turned it into a masterpiece.

The reason I use Kustom MX is that the product always turns out amazing. Fitting is never a problem and the durability is their strong point. I can’t have a bike with ADB logos all over it looking like a piece of junk. I love my bikes to stand out and always look fresh. Kustom makes this job really easy for me with a quality product. 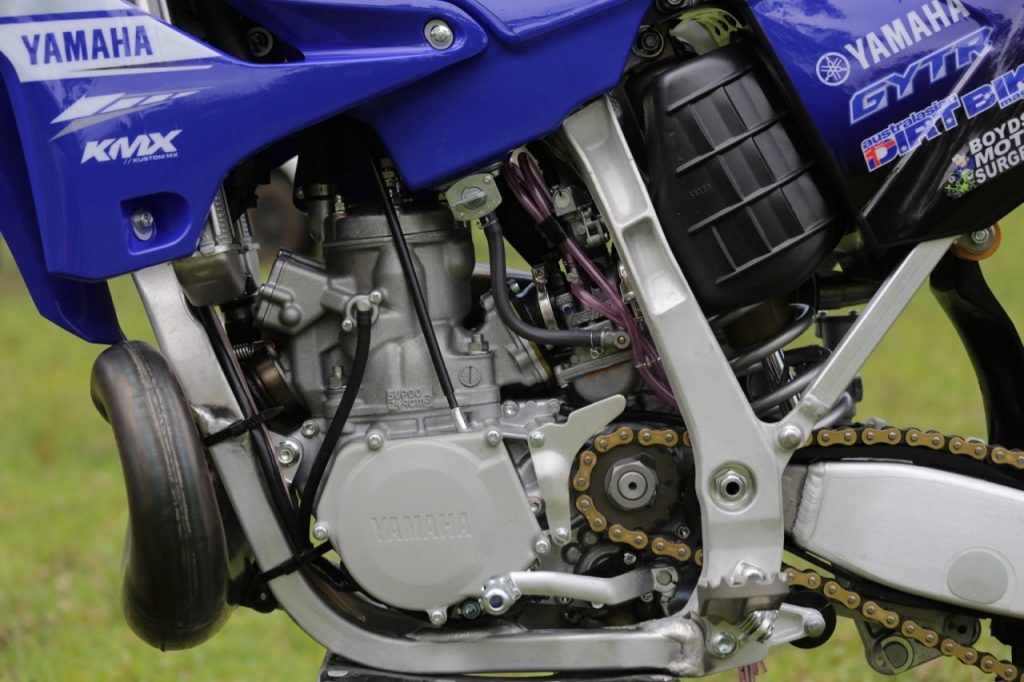 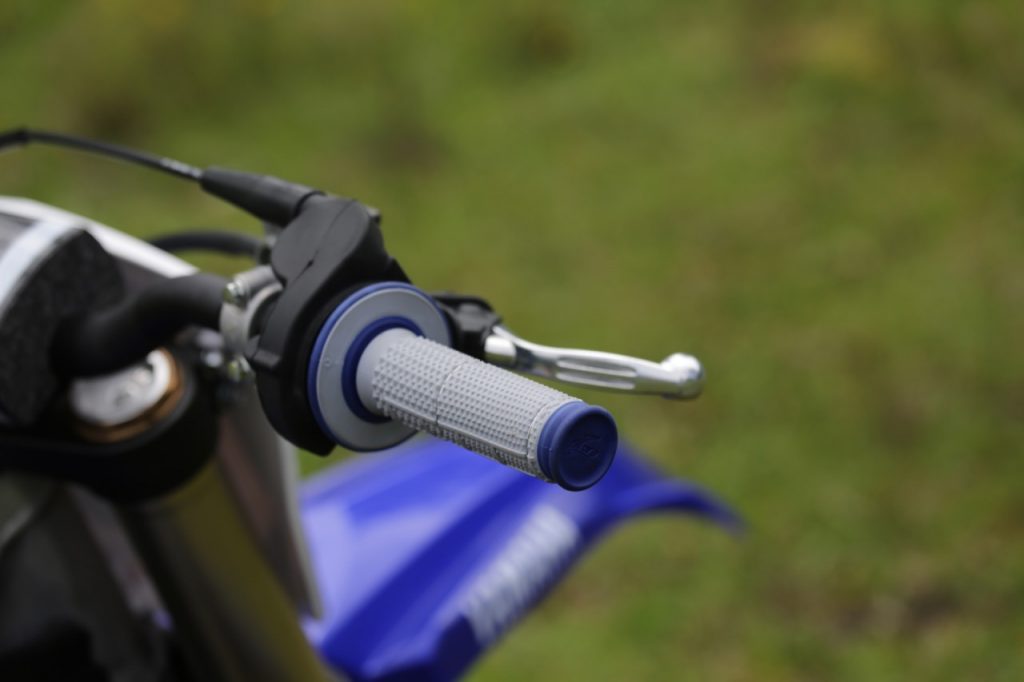 VERDICT
The Two-Stroke Cup was an absolute blast. I had a great time and thoroughly enjoyed myself. The atmosphere was certainly something that has to be seen to be fully appreciated.
In the pits it was more about mateship, checking out each others’ bikes and just having a good time rather than fierce competition.

The event was well run and greatly enjoyed. I still feel like I picked the best bike for the job. The Yamaha YZ250 was competitive without having to go over the top and splash out huge amounts of cash. There were times when I felt I would have liked a little more power up top and maybe a little head work would have solved that issue but, for the most part, the engine had more than enough power to be competitive.

I did have to stiffen the suspension as the day went on. I ended up with the compression damping adjusters only two clicks out front and rear and the rebound adjusters four clicks out. This isn’t an ideal position to be running them but it got the job done.

I would have benefited from revalving the suspension but, it most likely would not have improved my fourth-place finish. The only thing that would have got me onto the podium was to work on my starts. 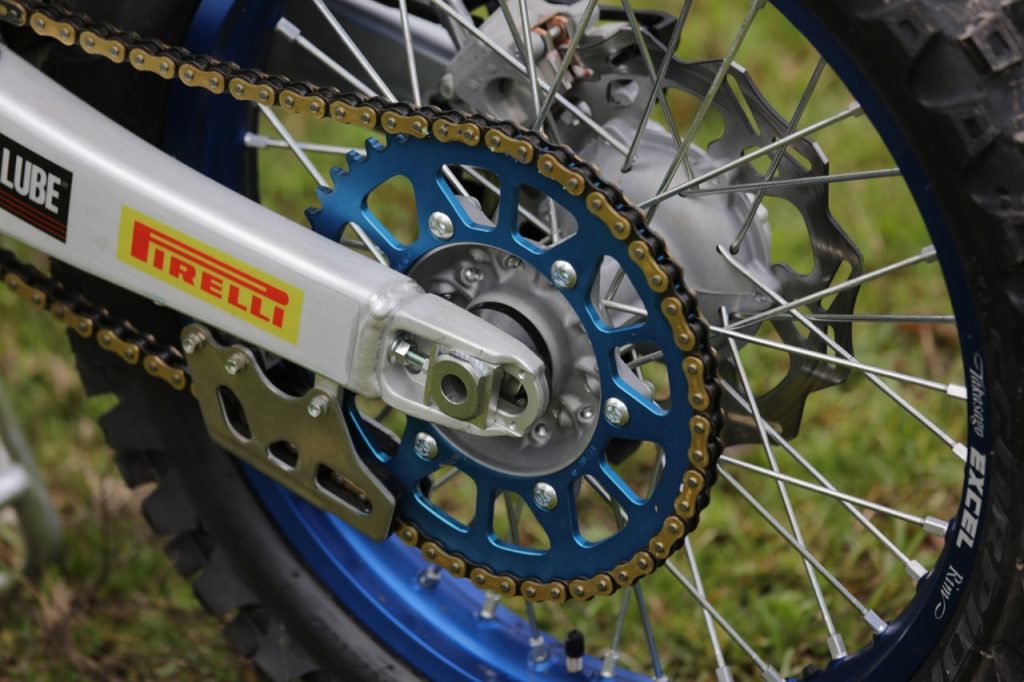 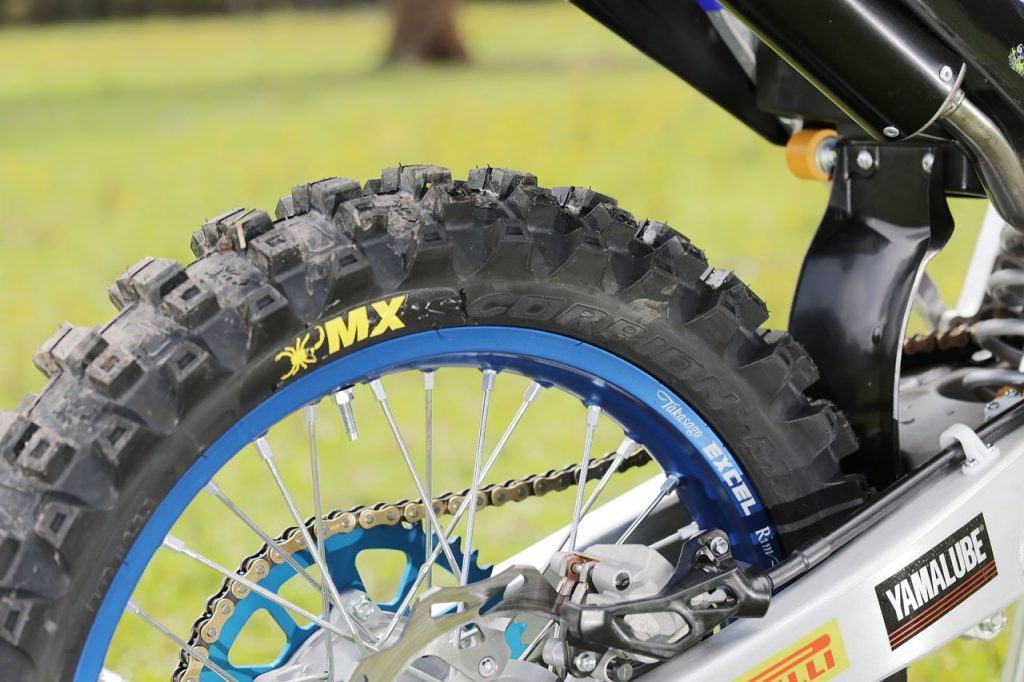 Despite being mostly stock, the bike didn’t hold me back at all. Considering my lack of seat time, it was impressive.

The gearing on the bike I was happy with just as I was with the jetting. The sticker kit held up well and still looks as good as it did before the meeting and the seatcover worked an absolute treat.

I’m happy with my tyre selection and I’m glad I chose to swap out the Mid/Hard rear for the Mid/Soft for the race. The Mid/Soft tyres hooked up really well and came out of the weekend showing minimal wear.

I felt that, for the time I had available I was given the best product to get the job done and was thoroughly impressed as to how well the two-stroke performed.

It was a whole lot of fun to go racing on, the only thing that felt out of place in today’s four-stroke world was that I had to pour oil into a petrol drum and shake it before pouring it in the bike.