The last time we saw Honda with an enduro bike was 2011. The exact time of death for the CRF450X is a little uncertain, as Honda didn’t really update the X much after 2008 then they stopped making it.

So that means Honda fanatics have been crying out for a new 450cc enduro for about a decade. How many diehards have made the switch to the blue brigade or orange army we don’t know, but the company will definitely have its work cut out trying to win them back. Fortunately, they will be able to let their latest masterpiece do all the talking as the 2019 Honda CRF450L is a dual-purpose trailbike that has all the right selling skills. 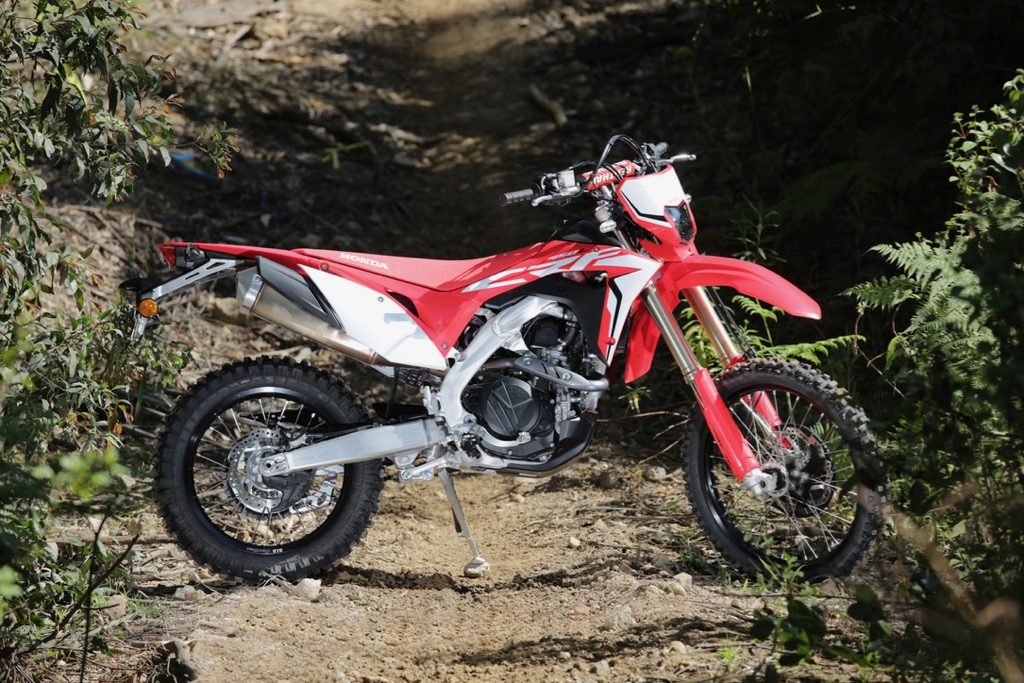 Unlike former ADB ad rep Big Red (who was fat and had red hair), this big red knows how to make a sale. While the marketing spiel tells you it’s based on the 2018 CRF450R motocrosser, fortunately, on closer inspection the CRF-L and CRF-R are significantly different. And, once you hop on, that gap grows.

For starters, this bike has a six-speed gearbox instead of a five-speed. The extra gear means the transmission must be wider, by about 25mm. A wider gearbox means a wider frame, and Honda has stretched the bottom chassis rails (where they meet the swingarm pivot). But, to the naked eye, this will go unnoticed. 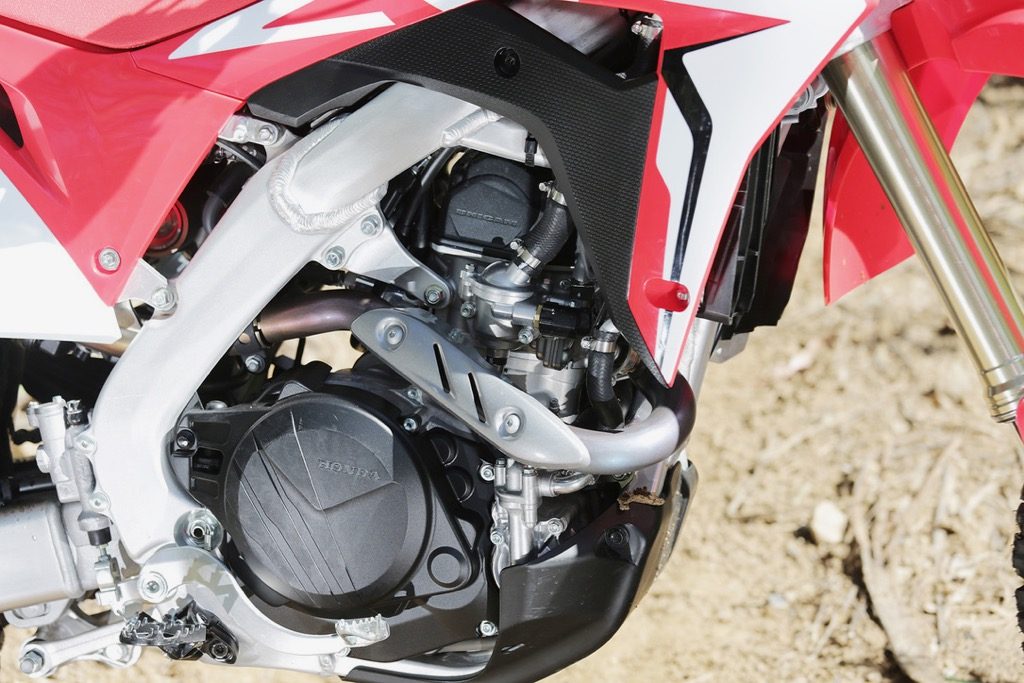 Honda also has strengthened the subframe and made it longer. This is so that it can carry the usual numberplate, taillights and indicators, plus a rack and panniers. A factory rack bolts straight up. The wheelbase is also marginally longer than the CRF-R, after a 3mm stretch in the frame just below the steering head to accommodate a steering lock.

The engine has been modified to suit the CRF450L’s more mundane duties. The motor is based on the four-valve, SOHC CRF-R mill, featuring a finger rocker arm for the inlet valves and the tried and tested PGM-FI found in the current R but with a triple-ring piston (for greater durability), a heavier crank (13 per cent more inertia for trailriding), new cam and valve timing (inlet has 7.7mm lift and exhaust has 6.7mm for smoother power) and less compression.

The bore and stroke remain the same as the 2018 R. To match the new engine internals, the L runs 1300ml of oil as opposed to 1100 in the R, which will be welcome relief for riders looking to turn this beast into a dualsport, long-distance hauler. 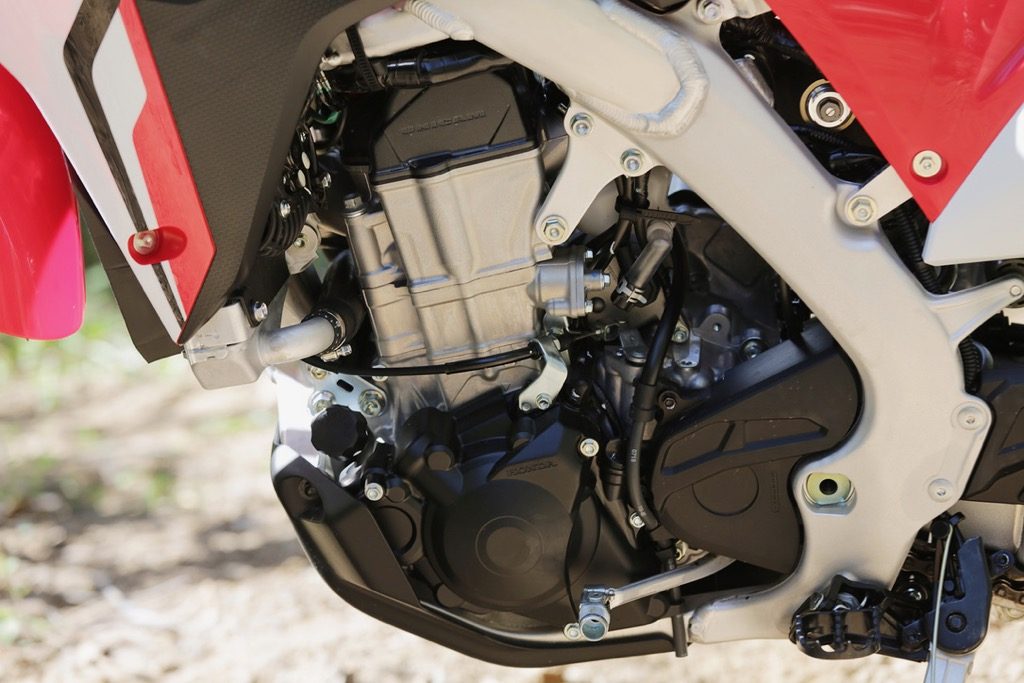 Being a motocrosser at heart and with a bunch of new internals, the CRF450L needed a new ECU. As we’ve come to expect on injected enduro bikes, Honda uses an 02 lambda sensor to flatten out the power and increase torque.

The big talking point after the CRF-L was revealed earlier this year was the service intervals. I questioned Honda about the gaps between oil changes and top-end strip downs and they assured me that once the bike is run in (there are a few extra services at the start, like a 150km oil change) the 1000km-interval minor services and 32,000km major services will be fine. I’m not game to leave my oil that long, seeing it can take me nearly 10 rides to get 1000km, so I would suggest sticking to what we know best: oil changes after every fourth ride and air filter cleaning every other ride. You could probably sit on an oil filter for 1000km. 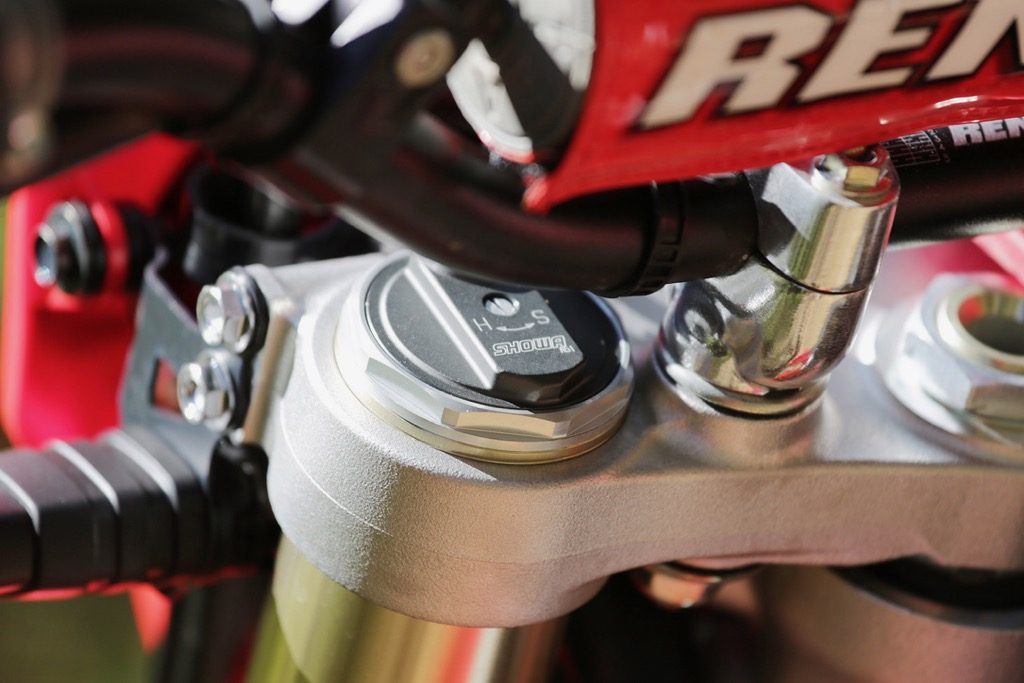 LUCKY LEGS
To compliment the enduro-spec motor, Honda has tamed the suspension. It runs softer springs front and rear (Honda could not confirm the specs) and plusher valving. The shim stack has been tampered with to give it an old-skool XR feel that is somewhere between a Suzuki DR-Z and Yamaha WR-F. The suspension has the same adjustability as the 2018 CRF450R, but it is softer than the motocross kit.

Our ADRs have done the dirty on this bike with the CRF450L’s power being halved, but Honda has a fix for that. All bikes will be sold with a derestriction kit which includes a new inlet manifold. The stock manifold is about as wide as your finger and the bike struggles to suck air, but with the new manifold (from the U.S. model, just like the ECU) the bike produces more power and breathes healthier. 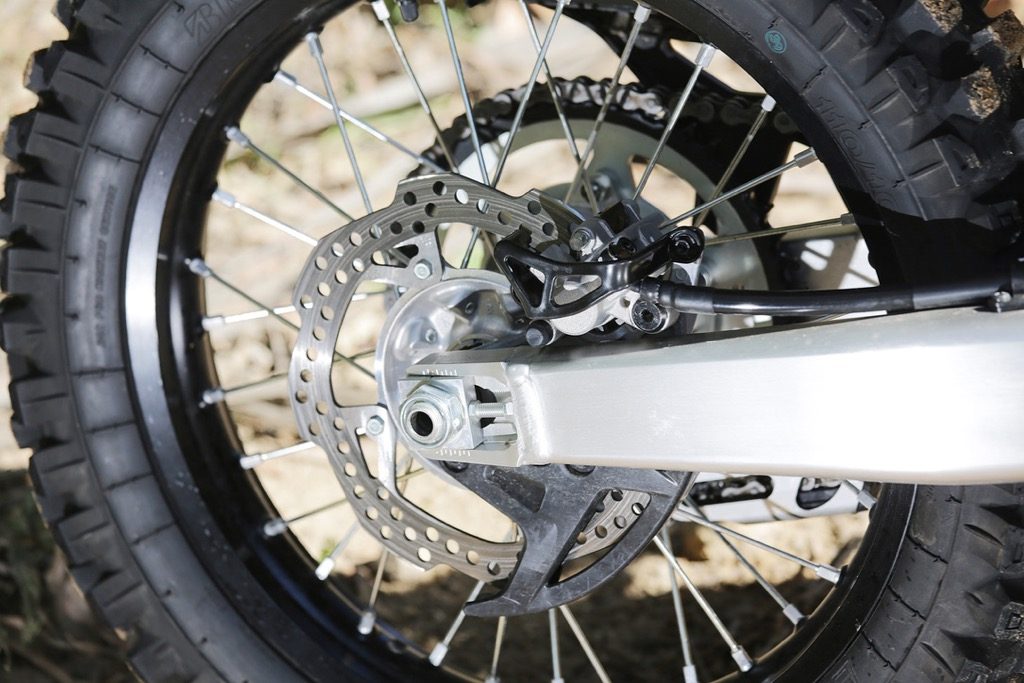 In addition to the less restrictive inlet manifold there’s a different airbox. Unlike the CRF450R airbox, which is open, the L is closed at the top but it can be opened up for better airflow if needed.

Just like Botox smoothes out wrinkles, Honda’s cush-drive rear wheel smooths out the ride. But this isn’t your traditional, heavy cush-drive with rubber inserts in the hub, instead the L runs a rubber-damped sprocket that stops the dreaded chain slap and sprocket bash when you decelerate. It will also reduce strain on the gearbox.

While it’s not a true cush-drive, it still works. This bike is silent and the chain chatter is almost non-existent.

But that wasn’t enough for the ADR boffins, they wanted the bike to be quieter than a room full of meditating monks. So, Honda has gone to town on the bike with a substance it calls polyurethane space foam that is inserted into the swingarm and behind the black plastic engine covers. Yep, that’s right, the L has a whole bunch of plastic engine covers that are lined with this foam to keep the noise down. The only question we’ve got is why does Honda have to do this and no one else? We’re on the case. 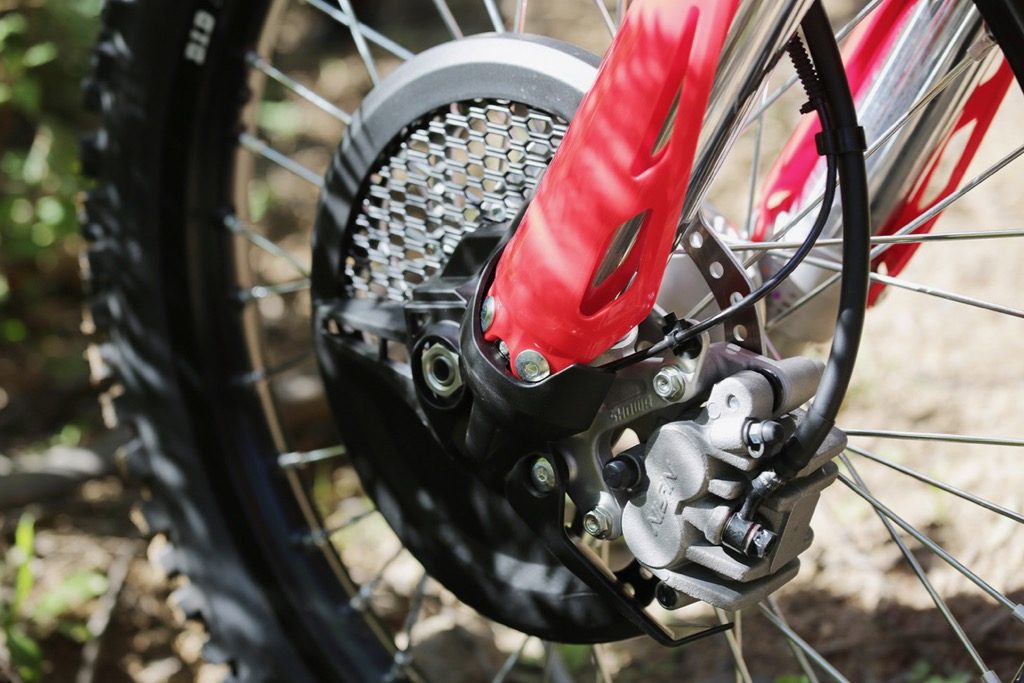 FILLER BITS
To complete the task of turning a motocrosser into a bush bike, Honda has had to use a heavy exhaust system from the muffler to the header pipe. It’s horrible to look at and sounds terrible too. An air-injection system and catalyser are also there to make the fumes more breathable. But, don’t stress, it’s only a matter of time before a decent pipe will be available. Oh and it has a single muffler, which means you might be saving a bit of weight.

Honda has opted for a larger rear sprocket with the six-speed gearbox, going up from a 49 on the R to a 51 on the L. The countershaft sprocket is still a 14, which is great for dualsport riding but for what we were doing out the back of Mt Kembla motocross track, which was mostly singletrack, I’d prefer to go down one tooth on the countershaft. 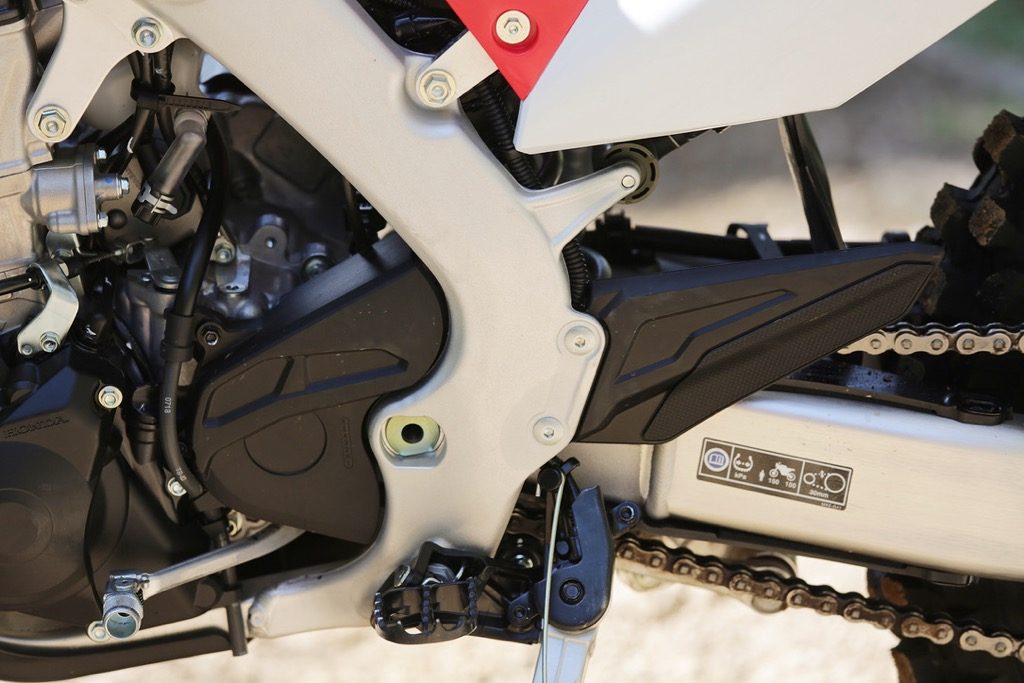 The battery is a light lithium-ion device, the triple-clamps are the same as on the 2018 ‘R’, the front brake caliper and master cylinder are different to withstand trail abuse, the digital dash is all-new (obviously), the headlight is a tidy looking LED set-up and the Renthal handlebar is the same non-tapered alloy item as on the R.

The bikes we rode were fitted with Bridgestone Battlecross X30 tyres, which aren’t the standard ADR-compliant rubber but Honda will supply the X30s with the optional ECU and inlet boot. The 18-inch rear rim gives you a wider choice of trail tyres and a larger, titanium fuel tank which holds 7.6L gives you a little more range than the 6.3L of the R but not as much as the 8.5L of the plastic tank on the RX.

The CRF450L does not come with handguards, but it does have a plastic bashplate and plenty of other plastic protective pieces, which stood up to the abuse. 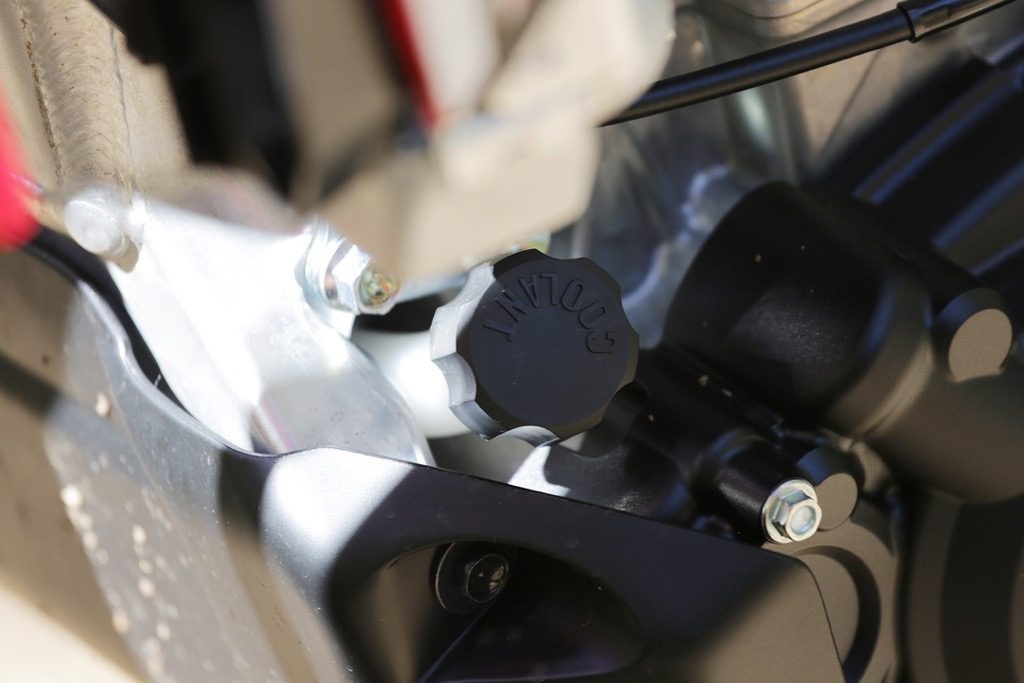 TAKE HER FOR A RIDE
The minute you swing a leg over the CRF450L it feels comfortable. It doesn’t have any quirky characteristics and the ’peg to seat to ’bar relationship feels neutral. Unlike more race-spec. machines with their flat, narrow seats, the CRF-L’s taller tank prevents you from resting your crutch under the handlebar when trying to get forward for cornering.

The cockpit feels a little agricultural compared to the more expensive 450s out there but it isn’t as dated as I’d expected. There’s still a bit of excess room behind the headlight which can make the bike feel big, but a little fine tuning in that department will condense the cockpit.

As we hit our first section of trail, the major standout was the suspension. The best way to describe it is firm Suzuki DR-Z suspension.

It’s incredibly plush and sometimes a little spongey, with one over-jump on a downhill section causing the suspension to reach the bottom of its travel, but it was not violent.
The 49mm Showa spring-cartridge fork has adjustable preload and compression damping while the Showa monoshock is fully-adjustable. If you just want to go trailriding, the standard suspension will suffice but if you want to use it as a dualsport bike or even as an off-road racer you will need something with a little more resistance. 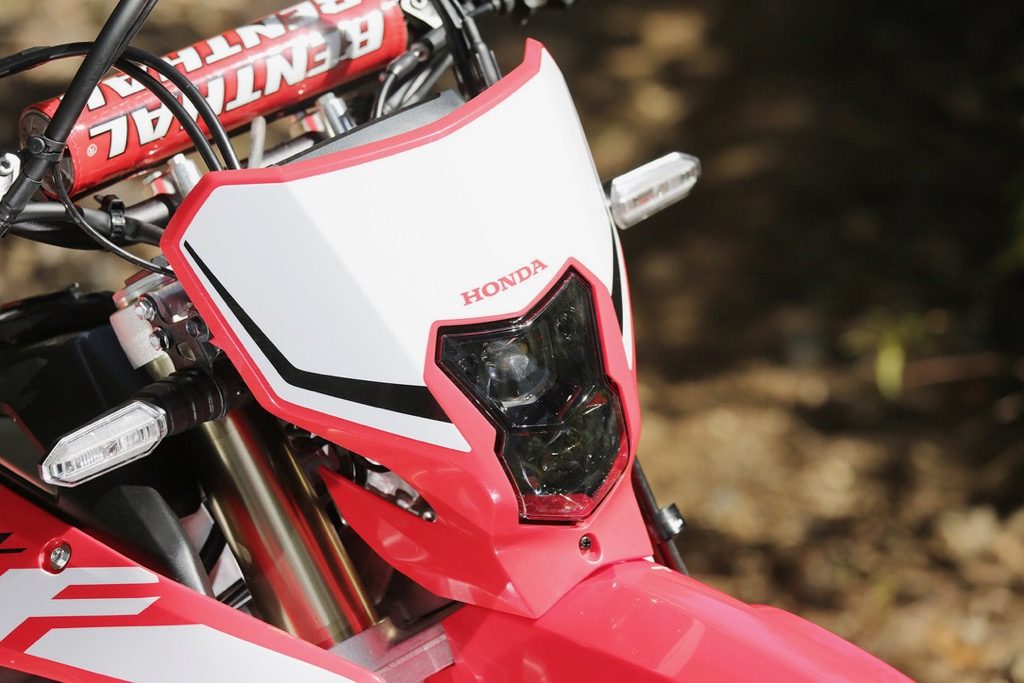 The engine is an absolute ripper. It is the ultimate trail donk. Mellow, tractorable and incredibly torquey but strong in the mid-range and right off the bottom. It doesn’t feel wild or aggressive and its linear power output will suit all trailriders and even racers. Most people don’t need a super-responsive, aggressive engine for trailriding or even enduro racing. I would still opt for an aftermarket pipe but that’s not because it needs more power, it’s because it needs to lose weight.

Speaking of weight, while this bike tips the scales at around 130kg wet it does not feel heavy. Unlike other bikes that lurch forward because they produce too much inertia or feel off balance because they are top heavy, this bike is well-balanced and easy to manoeuvre. For the log jump photo in this feature I had no problems performing a pivot wheelie or skid turn to get into position. 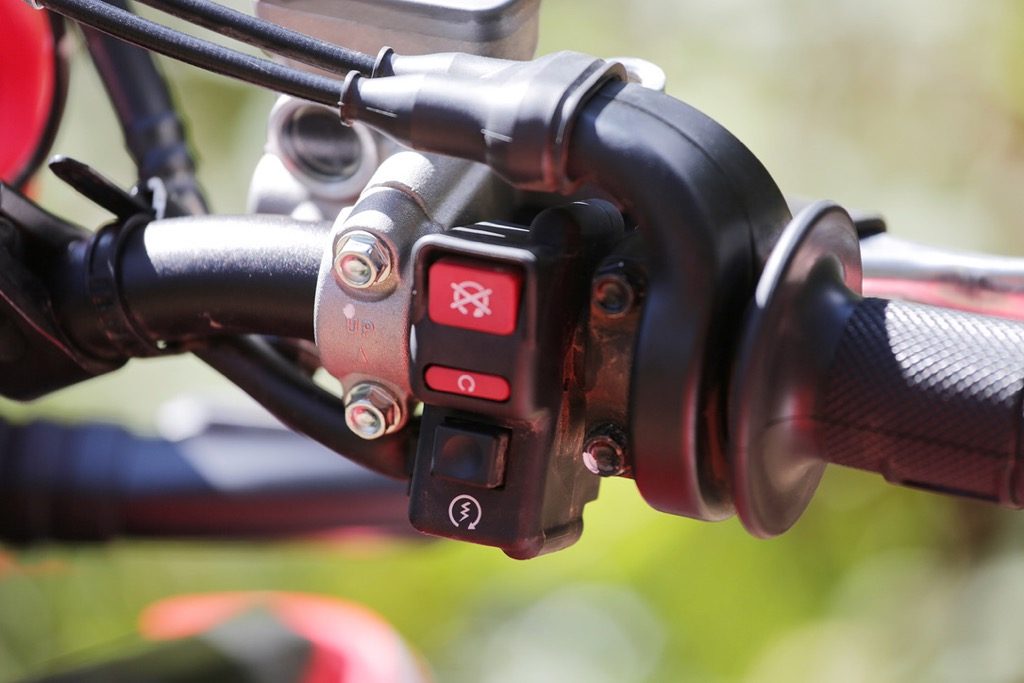 The 2019 Honda CRF450L has been marketed as a dual-purpose trailbike and it has nailed the design brief. As a trailbike it possesses the right amount of useable power, plush suspension, neutral ergos and excellent sitting or standing balance. It’s the kind of bike you can let sit in the shed for six months before blowing the dust off and passing it around to all your mates for a squirt without needing to adjust it.

The only sticking point is the price. At $12,990 it’s about $1000 more than we thought it would be. But, with Honda’s proven reliability, the massive service intervals and trail-ready characteristics the only money you’ll be spending once it’s in your garage is to shave a little weight. Apart from that, it’s ready for your next organised trail rally! 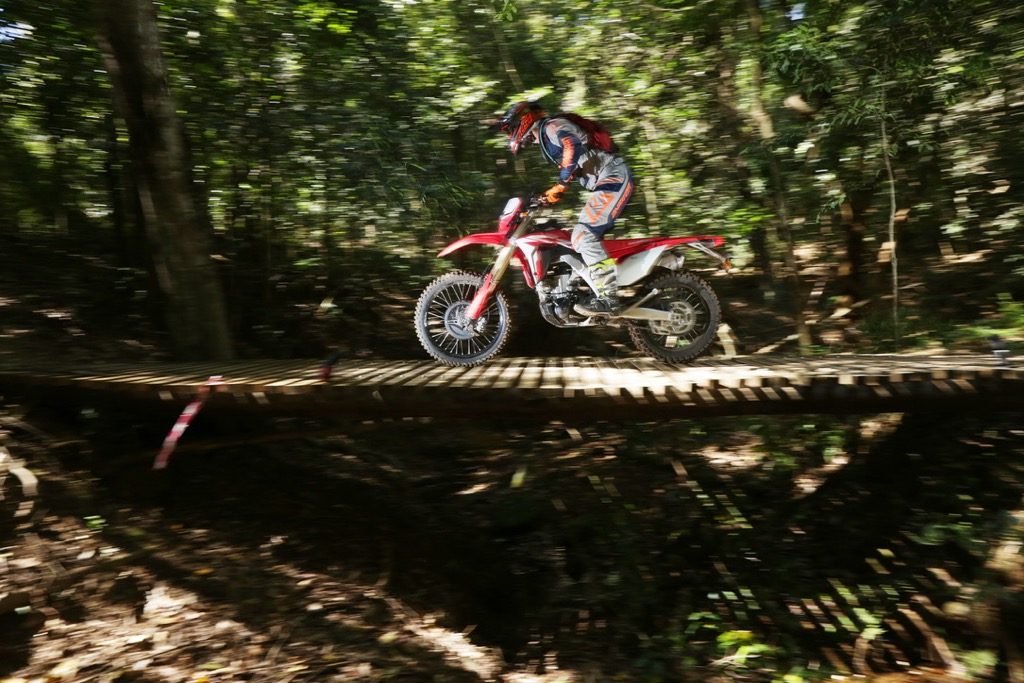