ADB was in France for the international press launch of the 2019 Sherco enduro range including the blinged-up Factory models.

Sherco did things a little differently for the launch of its 2019 enduro range. In French style, they didn’t want to just do what everyone else does so they launched every bike they make at the same time, on the same day. This included the full Racing range, top-spec Factory range and even the trials bikes.

It was a great opportunity to compare the enduro bikes back-to-back and see where they perform differently but, with seven Racing and six Factory models, there was simply too much for one magazine. So if you read my launch report in the last issue of ADB (#468), think of this as the second installment, covering the KYB-suspended Factory range.

STARRY EYED
I’ll admit, I get a little starry eyed over special editions like the Factory models from Sherco. Something about the bling factor, or maybe it’s the belief a better bike will make me a better rider when not even Wade Young’s factory Sherco could knock a second off my lap times.

Either way, I love me some bling. Maybe it’s an Aussie thing. After all, Australia is one of the largest markets in the world for Mercedes-AMG and, per capita, it is the largest. In the four days I was in France I didn’t see one Golf GTi nor any Renault Sport models whereas in Australia we have soccer mums getting around in twin-turbo, V8-powered land missiles that cost six times the average Australian salary.

The same rings true for dirtbikes and, although Sherco Australia won’t disclose sales figures, it told ADB it’s been roughly an even split between Racing, Six-Days and Factory models. 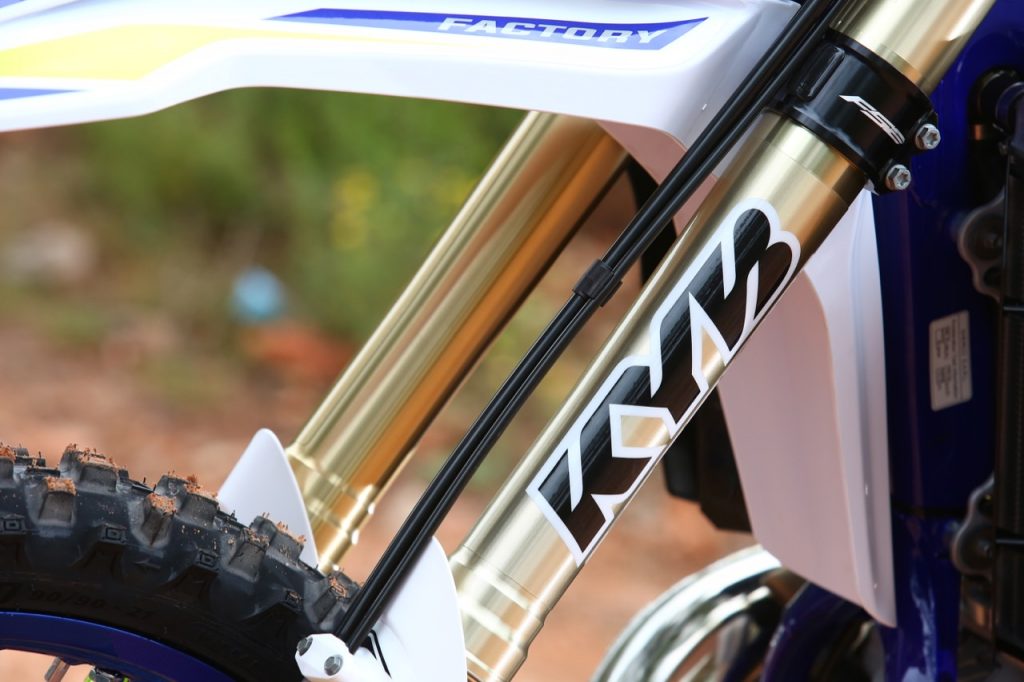 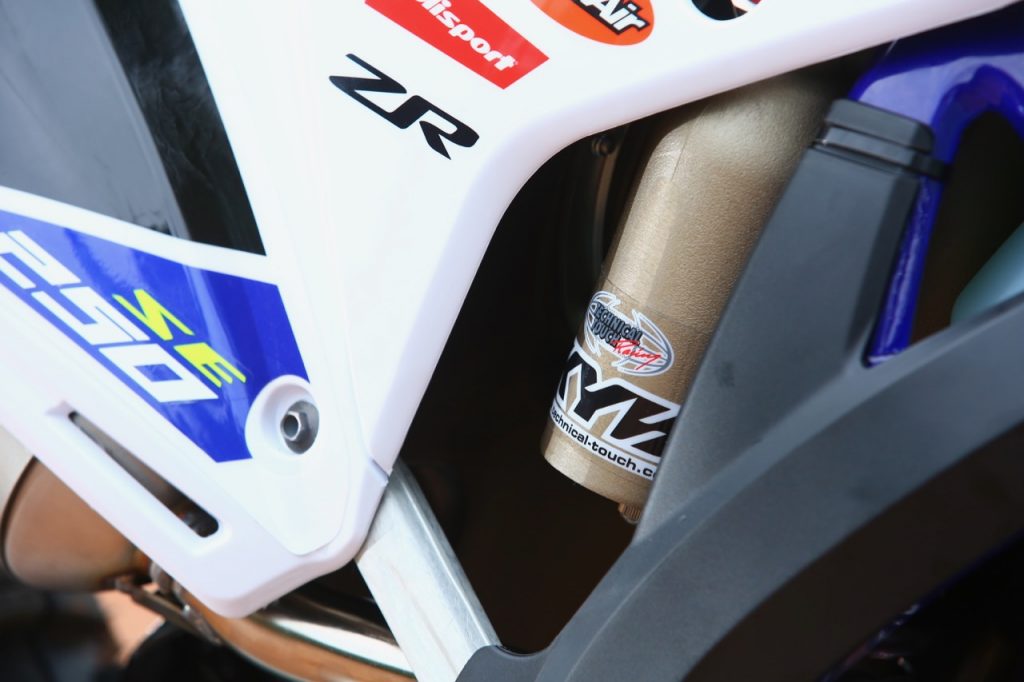 With no Six-Days anymore, Sherco Australia estimates they will see a 50/50 split between Racing and Factory from next year onwards. The Factory has always been at the top of the Sherco food chain. The Six-Days was middle ground between the Racing and Factory in respect to price and equipment and, like the middle child, a bit forgotten.

Besides the upgrades across the Sherco off-road line-up, that we reported in the last issue, Factory models receive a long list of parts that’ll have any prospective buyer salivating at the mouth (see breakout on the next page). The big news is the addition of KYB closed-cartridge forks and shocks. They replace the WP Xplor gear of last year, which now comes standard on the base models but without the preload adjusters that they featured on the 2018 Sherco Factories and all Husky models.

OLD V NEW
Having ridden a 2018 Sherco 300SE-R Factory only a month before hopping on the plane to France it was still relatively fresh in my mind when I landed in Nimes 40 hours later. It was a valuable opportunity to compare the old and the new.

As previously mentioned, the 2018 Factory ran WP Xplor suspension with pre-load adjusters on top of the fork tubes. The WP Xplor gear has been getting around. KTM and Husky run it, albeit in different spec, and a lot of people love it while some others don’t, it’s personal preference.

They are both excellent and have their own advantages. The KYB suspension suits what we call singletrack because of its ability at the upper end of the speed spectrum. On the tight, hard and rocky test loop at the international press launch in France it was borderline too stiff but I could see the benefits as soon as the trail opened up.
The Sherco mechanics had no hesitation in admitting the KYB bikes might be difficult to ride around the test loop, which was trials-bike terrain. The Factory model is more tuned for race pace and, despite its name, the Racing is more trail-spec. 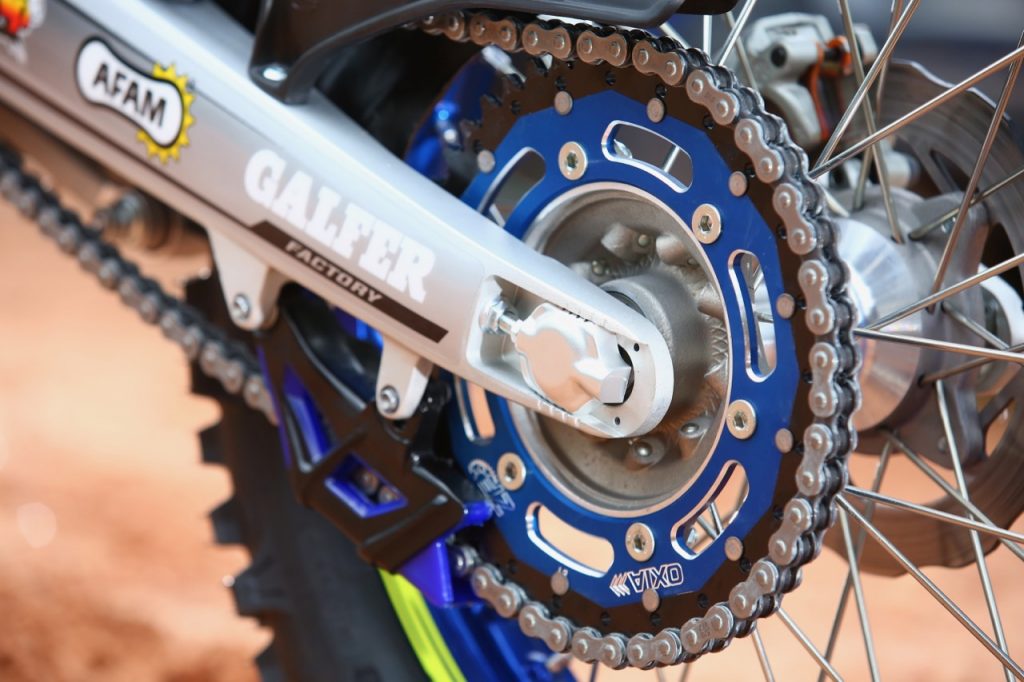 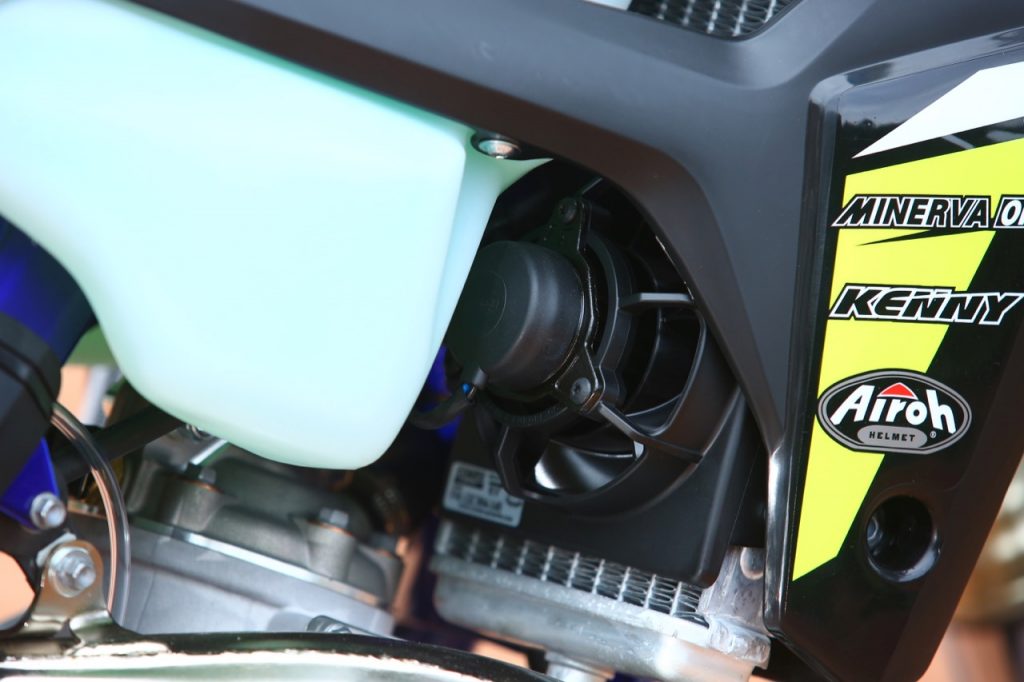 At speed, the Xplor 48 fork on the 2018 Factory felt twitchier. I especially noticed this under hard acceleration out of corners and through whoops where I found myself fighting a bit of headshake. It didn’t feel as planted as the 2019 model and the fork had more of a tendency to deflect, although damping settings play a big role in this.

In slower terrain, the Xplor 48 showed its class. The bike was less tiring to hang onto riding through snotty first-gear rock gardens. Where the KYB got better the harder you pushed, I didn’t find the Xplor to respond in the same way.

On the limited sections of fast trail at the 2019 launch, the KYB suspension squatted under hard throttle and dealt with the acceleration bumps more effectively, I found myself not gripping as tightly and not getting kicked around as much as the 2018 model.

The fork didn’t deflect off trail junk you’d rather not think about when riding at third-gear speeds and through chopped-up sections of the trail I didn’t experience any uncomfortable headshake.

The KYB shock, like the fork, is more at home going fast and there wasn’t a hint of wallow or packing down over the small section of whoops and I didn’t feel I had to fight it when accelerating hard up rocky hills. The firmness was exactly what you wanted on the fast sections of trail and, from my experience, what they call fast stuff is what 90 per cent of what Australians probably call tight singletrack. 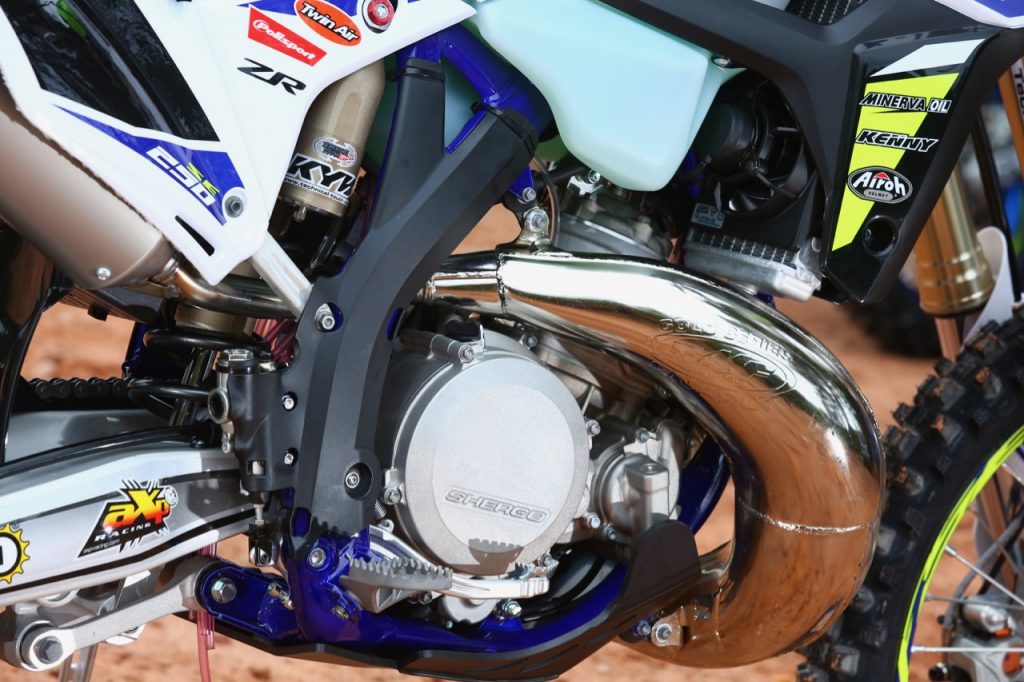 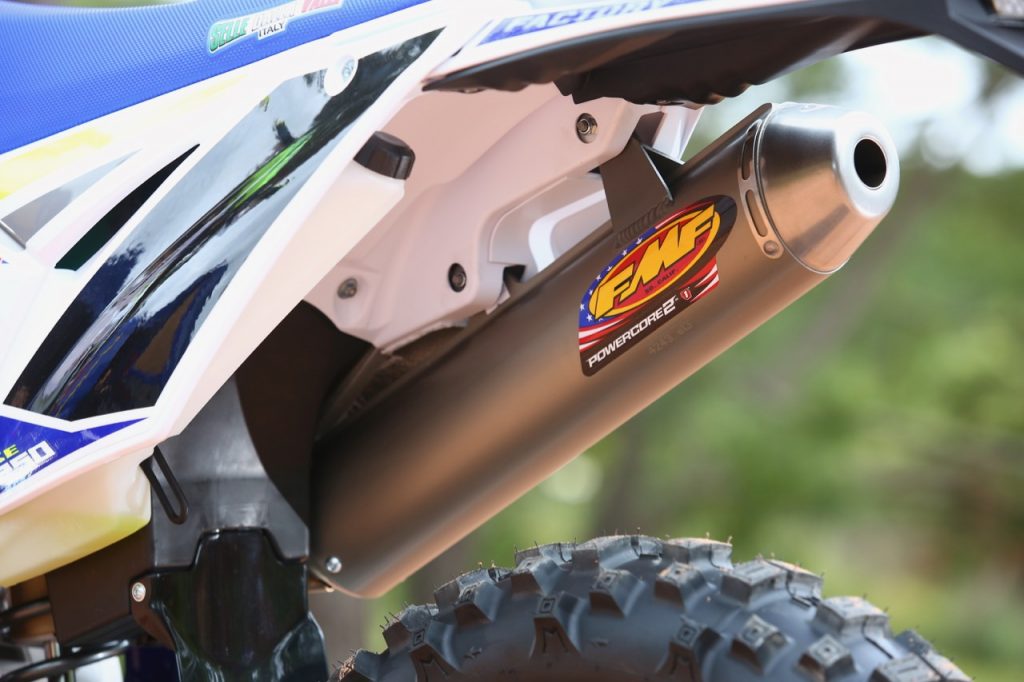 These changes have gone a long way to taming the famously aggressive Sherco 300 smoker. It hasn’t lost any of the low-range torque, which still baffles me, but it’s smoother as the engine picks up revs and approaches the top-end. To put it simply, it’s easier to ride.

The tamer engine and KYB suspension set the 2019 Factory model apart from this year’s. As you’d expect it’s another step forward but, despite being only one year apart, they feel very different.

Attached to the updated engine is the FMF Gold Series Gnarly expansion chamber also used in 2018. It’s a popular choice among trailriders and is a good all-round pipe as it significantly boosts bottom-end. It was my go-to pipe on any two-stroke I’ve owned in the past and I would usually pair it with an aggressive power-valve setting to retain top-end punch so I’d get the best of both worlds.

However, it also comes standard on the 250SE-R Racing and 300SE-R Racing so there’s not much to talk about there. The major difference between the Racing and Factory two-strokes is the KYB suspension, besides the obvious bling bits. 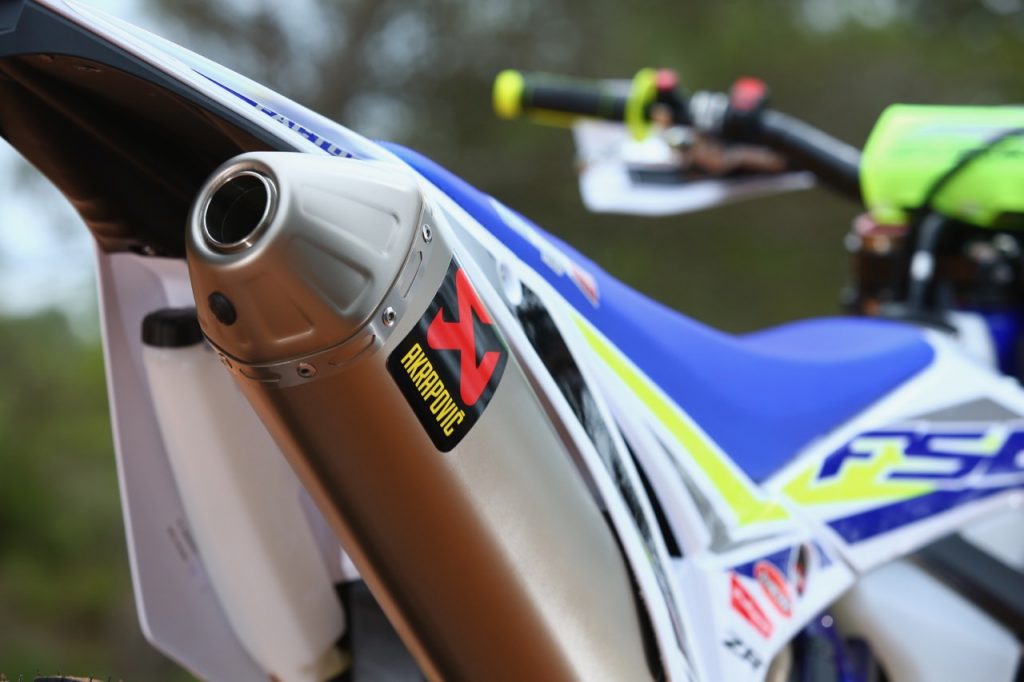 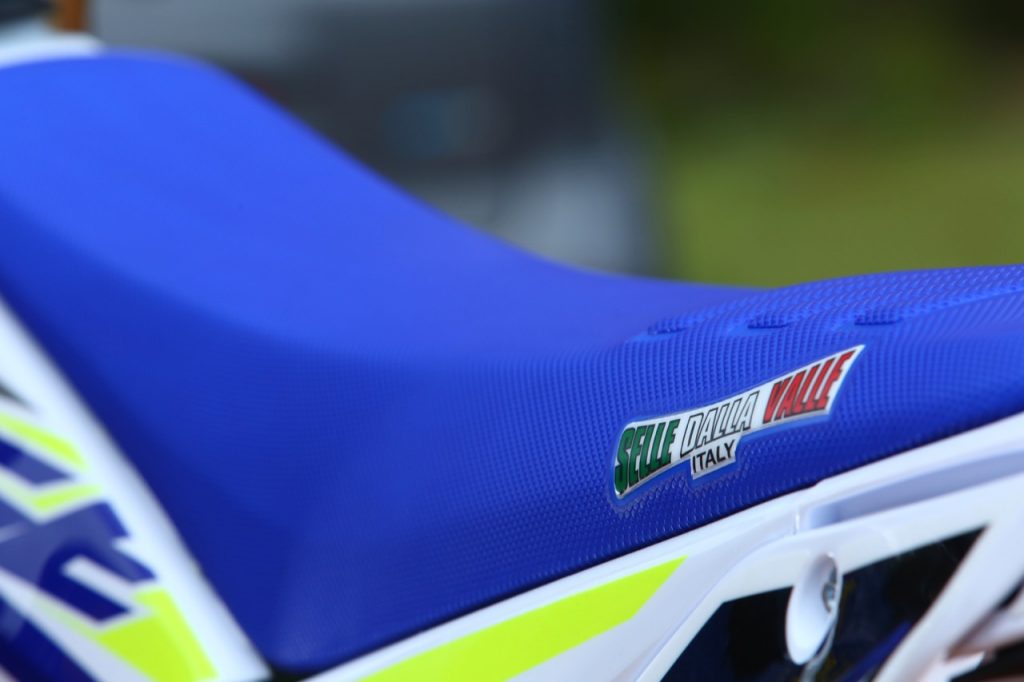 DIFFERENT STROKES
Four-stroke fans will be pleased to know there is a Factory version of every four-stroke in the 2019 range and I had the chance to ride them all. The engine internals are the same as in their Racing counterparts, but the Factory models come standard with a premium Akrapovic system, plus the rest of the bling.

My experience with Akrapovic exhausts has been nothing but positive and Sherco has made the right call going with them for its Factory models. The result of the full Akrapovic system is not only that glorious sound resonating from the muffler but stronger bottom-end power and crisper throttle response.

The smaller-capacity models highlighted this best, with the 250 and 300 Factory gaining some highly desirable bottom-end torque and improved throttle response thanks to the free-flowing header pipe and muffler. The engines feel less restricted and make the Racing models feel a little asthmatic by comparison.

The 450 Racing is already a quick engine, so the benefit of the pipe on the Factory is not as noticeable. Sherco only had a 500 Factory at the test, so, having not ridden the 500 Racing I couldn’t compare, but we expect the 500SEF Racing to be tamer than the fire-breathing 500 Factory.

If you’ve ever dreamed of becoming a factory rider but you’re lacking the all-important skill, these Sherco Factory models are as close as you will get, although without the groupies.