When I got my invite to the Triumph Scrambler 1200 XE launch I was nervous that a bike like this wasn’t really up our readers’ alley.

It wasn’t an adventure bike, more like the thundering desert sleds raced by the legendary Steve McQueen and Bud Ekins in the ’60s, so how was it relevant to true blue ADB dirtbike owners?

After a bit of attitude adjustment by Triumph go-to-market manager Paul McCann, I was signed up for the launch. McCann convinced me that the 1200 XE would be more than capable off-road and was just like a big-arse dirtbike. Despite his arm twisting I was still a little sceptical until I read the specification sheet: 37.5 per cent more peak torque than the 900cc Street Scrambler, Showa USD fork with adjustable rebound and compression damping and 250mm of travel, twin Ohlins shocks with fully adjustable preload, compression and rebound (with none of that electronic stuff), 32mm longer swingarm than the more road-oriented Scrambler 1200 XC, a seat height of 870mm, wide, tapered handlebar, laced 21-inch front rim and 17-inch rear and Pirelli Scorpion Rally tyres as standard. This is a 1200cc dirtbike! 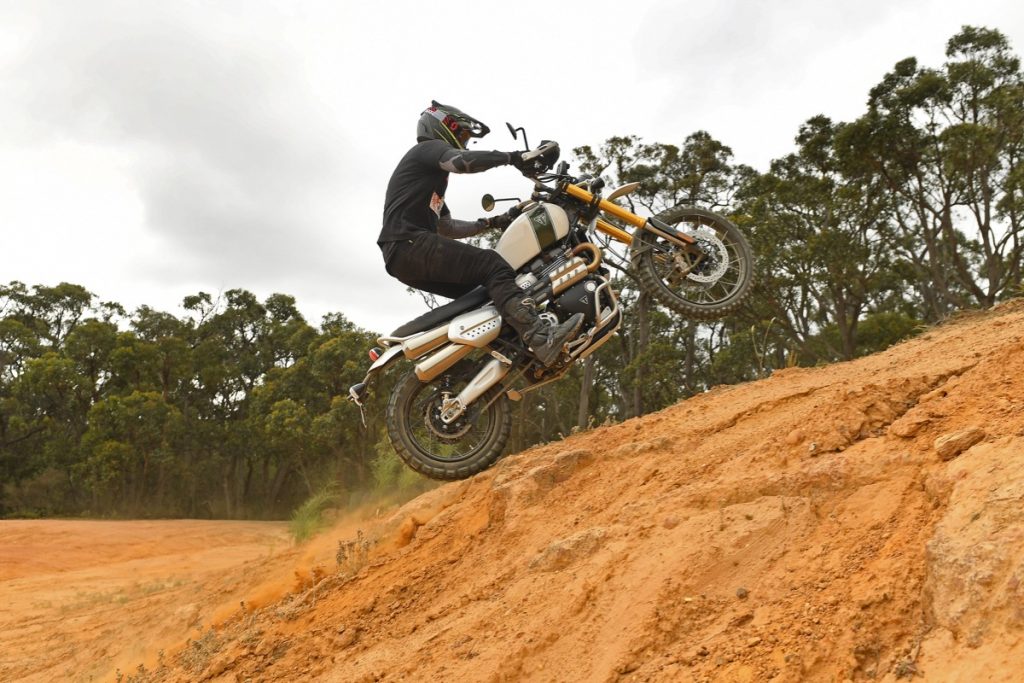 Triumph kick-started the Scrambler scene when the likes of McQueen got involved with the brand. It re-entered the market in 2016 with the road-oriented Street Scrambler. Two years later and Triumph decided to get serious with a 1200cc Scrambler with more off-road capability. They bolted on a bunch of defence gear, wrapped it in knobbies, tuned it for off-road and jacked up the suspension. What they created was like the Hyde of dirtbikes, it’s an absolute monster! 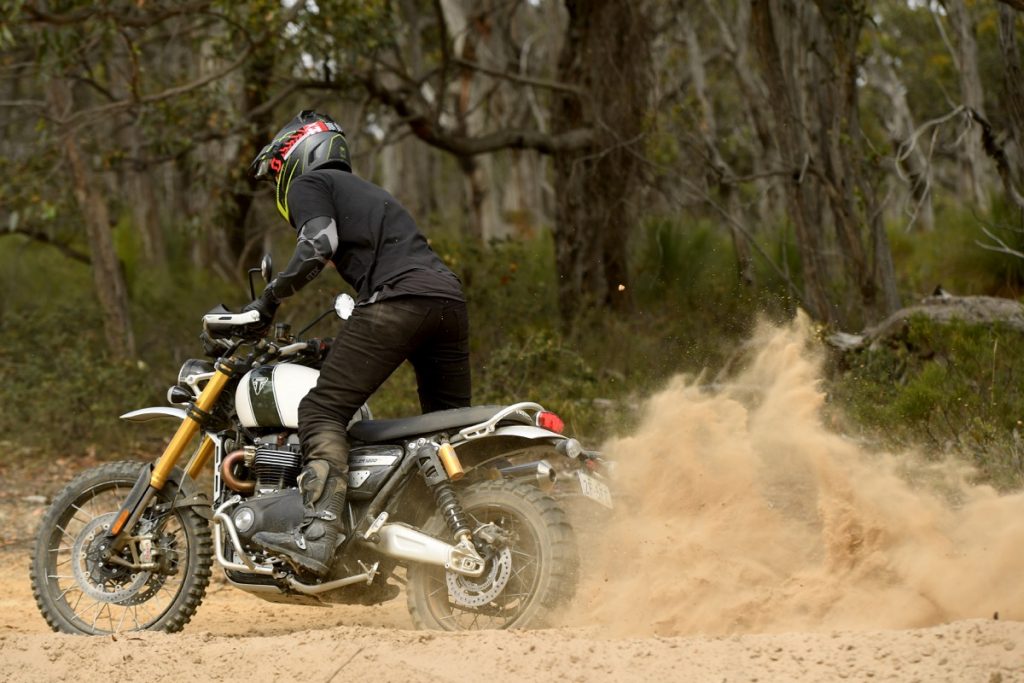 From the moment I hopped on the Triumph Scrambler 1200 XE I knew I’d been right to join the launch. Sure it’s not light (207kg) like a dirtbike and runs twin shocks but stand on the ’pegs and muscle this thing through tight singletrack or over big logs and you’ll forget all about its road-oriented beginnings.

WHERE IT TRICKS YOU

When people hear the word Scrambler they instantly think hipster with a beard and a trucker’s hat hanging from their belt loop riding from café to café. While that image of your typical Scrambler pilot is not without foundation, the capability of the Triumph Scrambler 1200 XE goes far beyond that.

Seated behind the handlebar you look down directly on the top of the fork legs, just like you do on your dirtbike. If you’ve got a flat-blade screwdriver handy you can adjust the separate-function fork from above, just like you would on your dirtbike. You’ll notice the seat is flat and tall which props you up and forward, forcing you to sit on top of the bike not in it like many scalloped-out adventure bikes do. A solid set of handguards protect the adjustable levers (the clutch one needs more adjustability as I found it squeezed my outer fingers a little) and an adjustable tapered ’bar that can be moved forward and back to suit you.

Look down and you’ll notice annoying rubber inserts in the middle of the footpegs. Don’t stress, you can rip those out for dirt work. What you’re left with is a comfortable, wide footpeg with aggressive teeth for gripping your boots when sliding through dirt corners. The brake pedal has an aggressive set of teeth for grabbing with your toes and the gearlever tip folds, so if you bin it on the left it should just fold back without breaking. 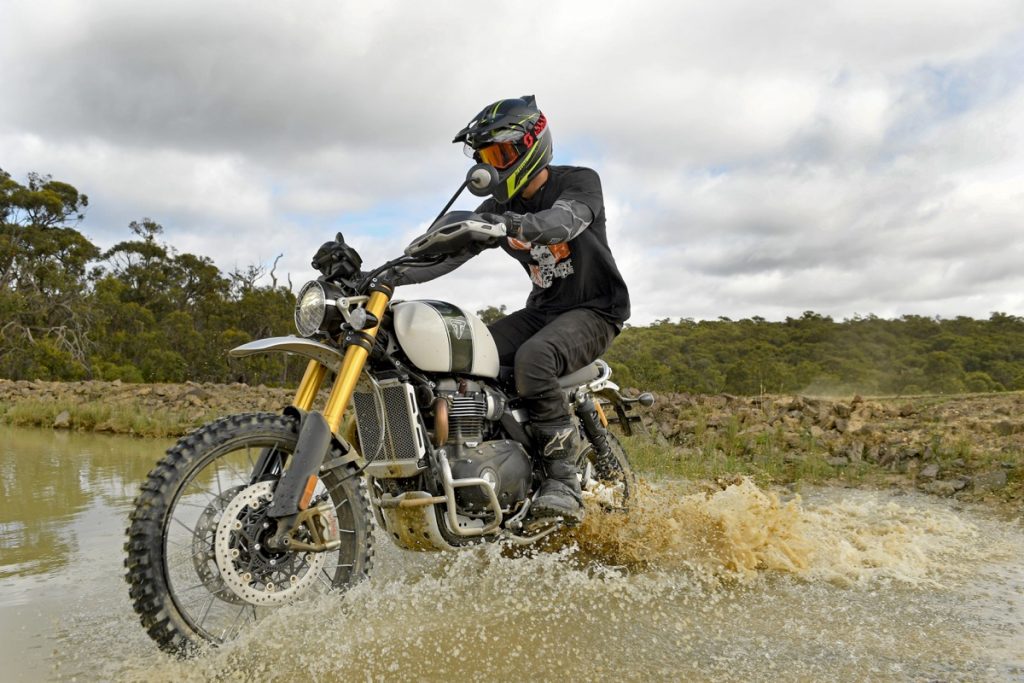 On closer inspection, when you look down you’ll notice an aluminium bashplate, crashbars and retro, shorty aluminium mudguards. On the handlebar you’ve got all your typical gadgets like a switchblock that controls the rider modes on the left (see sidebar) and the stop/start button on the right. Sitting on the Scrambler XE it feels like a dirtbike, albeit a big, heavy one.

The XE version of the Scrambler (not to be confused with the XC) has had its heart altered. The low-inertia, six-speed, eight-valve parallel twin is derived from the Bonneville engine but has been tuned for the bush. To improve the XE’s performance off-road, Triumph added a magnesium cam cover, altered the clutch assembly, changed the balance shafts, inserted a new crankshaft and lighter alternator and added a high-compression head. The end result is an incredibly torquey engine that, while a little more aggressive than some of the 1200cc ADV bikes, is just as manageable with some controlled clutch input.

I loved the more aggressive throttle setting but some of the testers found it a little difficult and attempted to personalise the traction control, ABS and mapping. You can do this by selecting “Rider” on the TFT screen and customising everything to suit you, so some opted to use the Off-road Pro settings with ABS and traction control off, but with the softer Rain mode engine mapping. 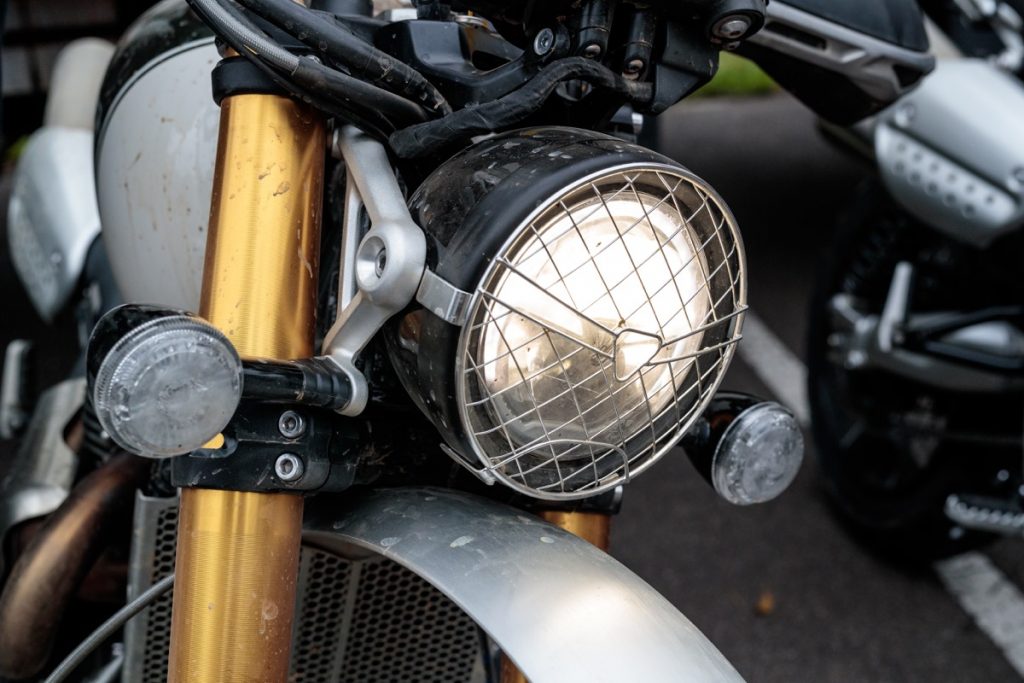 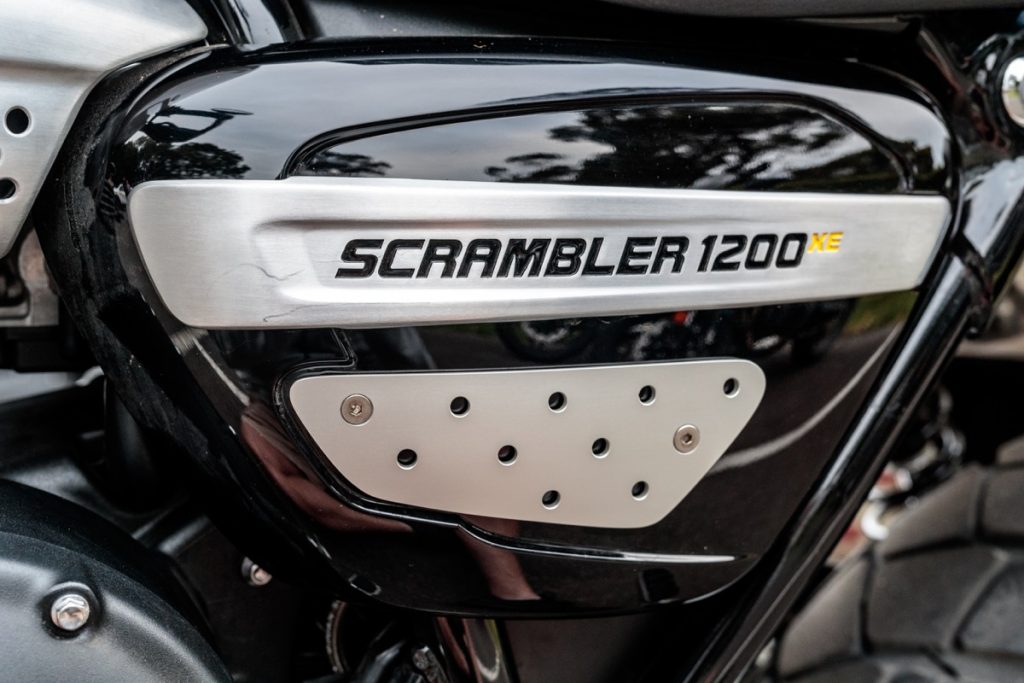 Not me, I loved the punchy throttle. It allowed me to jump step ups, launch over logs and wheelie across holes and ruts. It feels no more aggressive than a 450cc motocross bike. And like any dirtbike, I spent most of my time in second and third so it is geared quite short for a 1200cc machine.

While I love the aggressive, grunty engine, I had issues with it flaming out a little. When I spoke to Triumph’s Cliff Stovall he said they were aware of it but said there was little they could do seeing the bikes have to meet Euro 5 compliance. New emission regulations out of Europe mean manufacturers have to implement choking hazards which restricts airflow and can wreak havoc on things like this. It is only noticeable when performing slow U-turns and I never felt it bog or flame out when hopping logs.

To finish off the typical Scrambler look is the twin side pipes. What I love most about this design is the fact they were not underslung and, therefore, do not reduce the ground clearance. Unless you drop the bike on the right, the pipe will be hard to damage. The only thing that bugged me was how hot the pipe got and how close my right leg was to it. The pipe splits into two just after the catalytic converter and that’s where it is piping hot, pun intended. Triumph Australia tried wrapping heatproof tape around it but it didn’t work. It’s not a deal breaker but something to be conscious of on hot summer days. 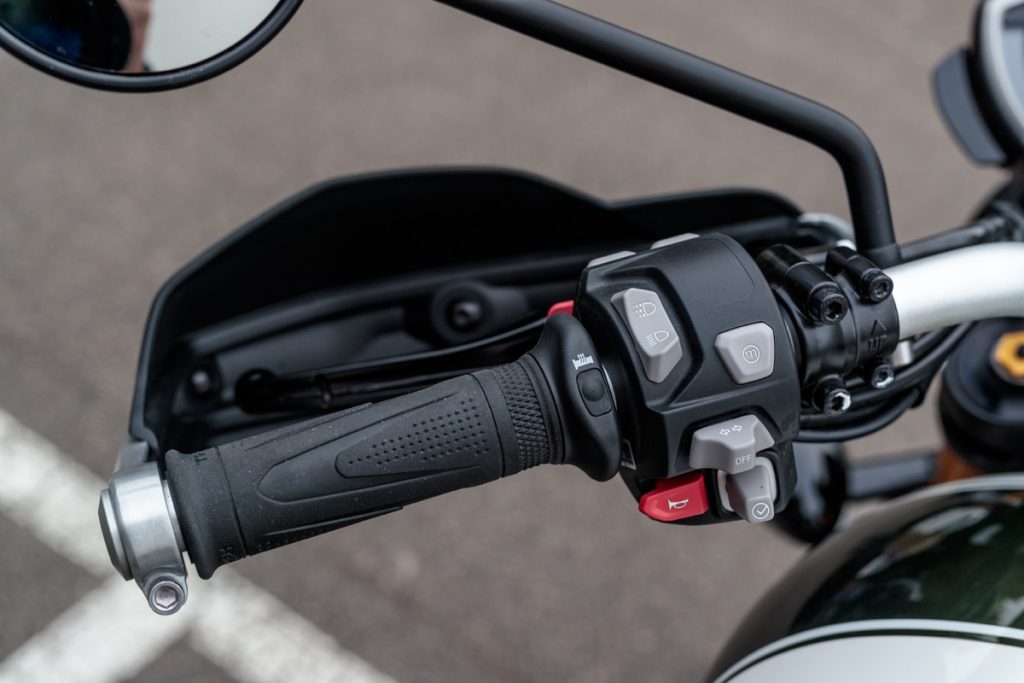 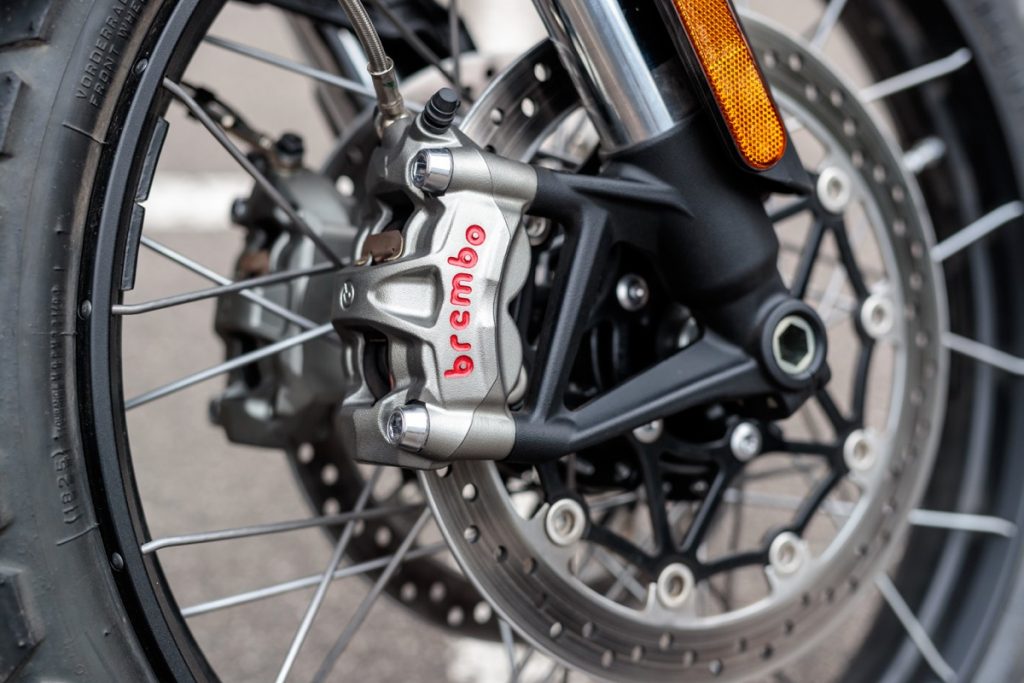 While the engine feels like it produces far more torque than the Triumph Tiger range, it is the suspension and chassis that make it feel more like a dirtbike than anything else. The fork is firm, perfect for my 98kg frame, and the steering feels solid and tight thanks to more rake (26.9 degrees) and trail (129.2mm) on the XE.

We were taken to the Australian Automotive Research Centre testing facility in Anglesea, Vicco for the dirt component of the test and let loose on the four-wheel-drive proving ground. We had a pretty intense sand loop with a bunch of jumps, logs and water crossings to play around on. When hopping logs it feels just like a dirtbike, a little double-blip technique and the bike will rocket up into the air, remaining balanced and in control at all times. The firm suspension doesn’t allow it to dive or bottom-out when smashing into the logs. 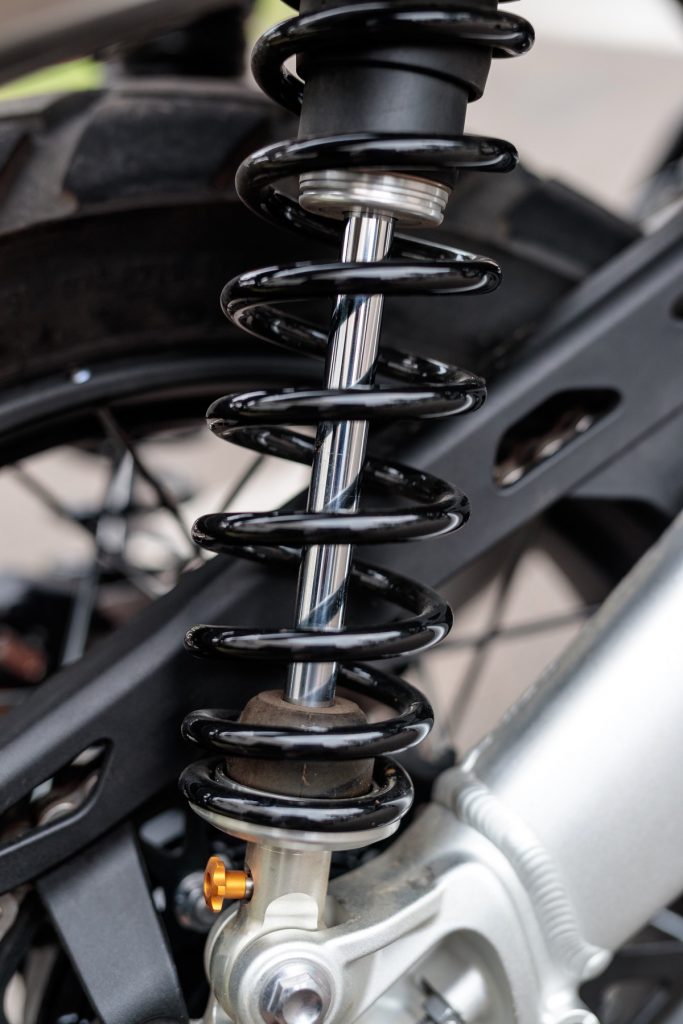 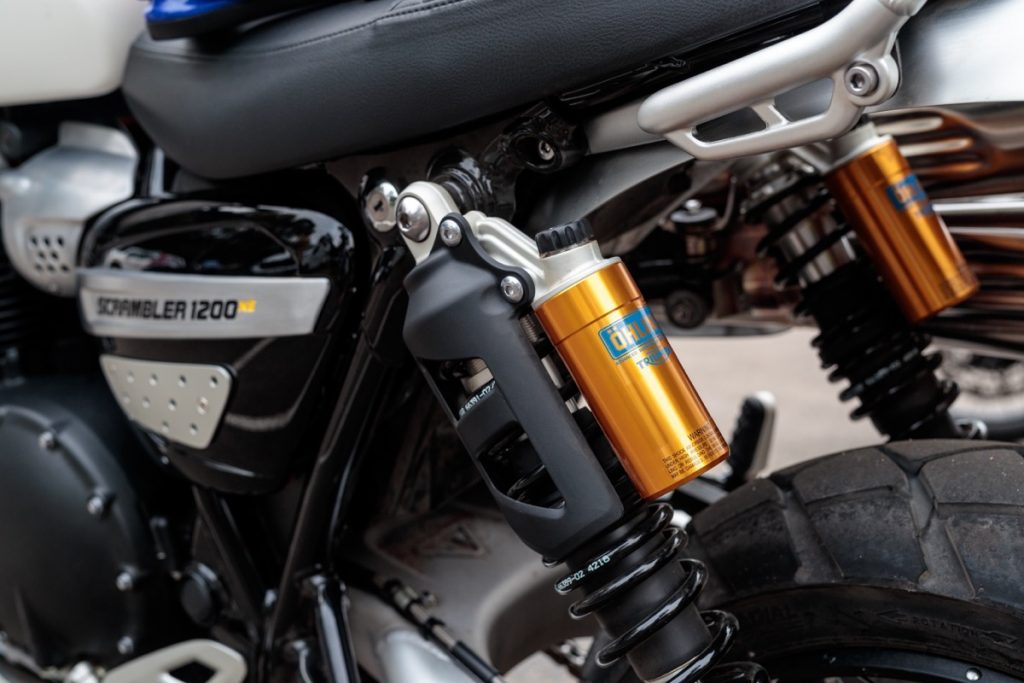 It crawled comfortably through water at low speeds and ploughed through the sand without too much tank slapping, providing you kept the throttle on. When launching tabletops (yes, they actually had tabletops for us to jump) you just needed to make sure you weren’t crossed up because correcting something this large can be detrimental to your health. If I kept the bike straight it handled the landing with ease, never bottoming. 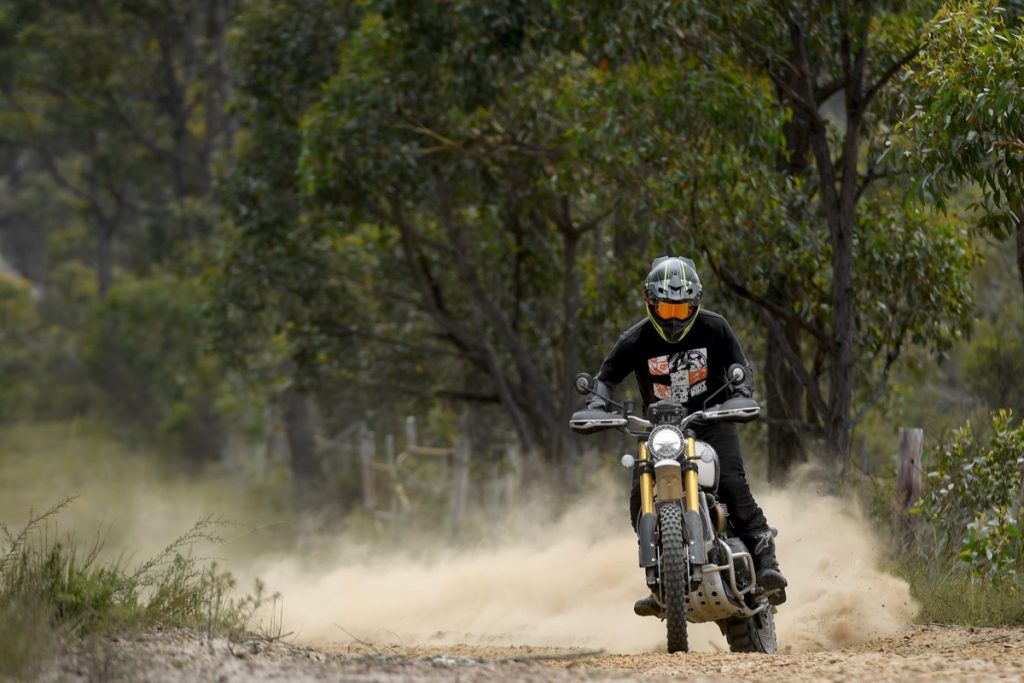 It took some convincing that the Ohlins shocks would work but once I smashed into a bunch of square-edged bumps I was convinced. Sure it is a little heavier and the exposed springs could come into contact with the ground if you crash, but the heavier rear-end actually helps keep the bike tracking straight. You can also make quick adjustments manually so if you know you’re going to tackle a certain terrain for the day you can adjust the shocks to excel in almost any condition.

WHO’S GOING TO USE IT?

The standing position on the Scrambler XE feels just like a dirtbike. You don’t need to bend your back as it pushes you forward and over the front-end. You can almost ride it like you would a dirtbike, but, would you take a $22k, 207kg machine into the bush? I guess it depends how much money you’ve got.

It also wouldn’t take much to turn this into a decent adventure bike, all it needs is a screen and a bigger fuel tank (most riders got between 3 to 5L/100km from the 16L tank) but if you did that it might lose its dirtbike prowess. 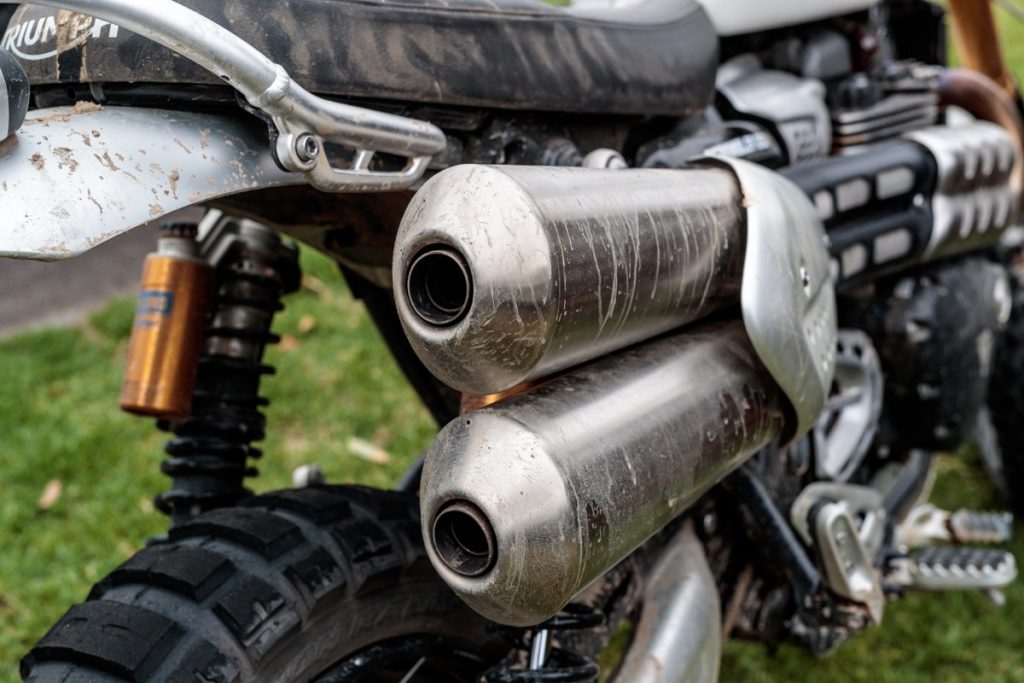 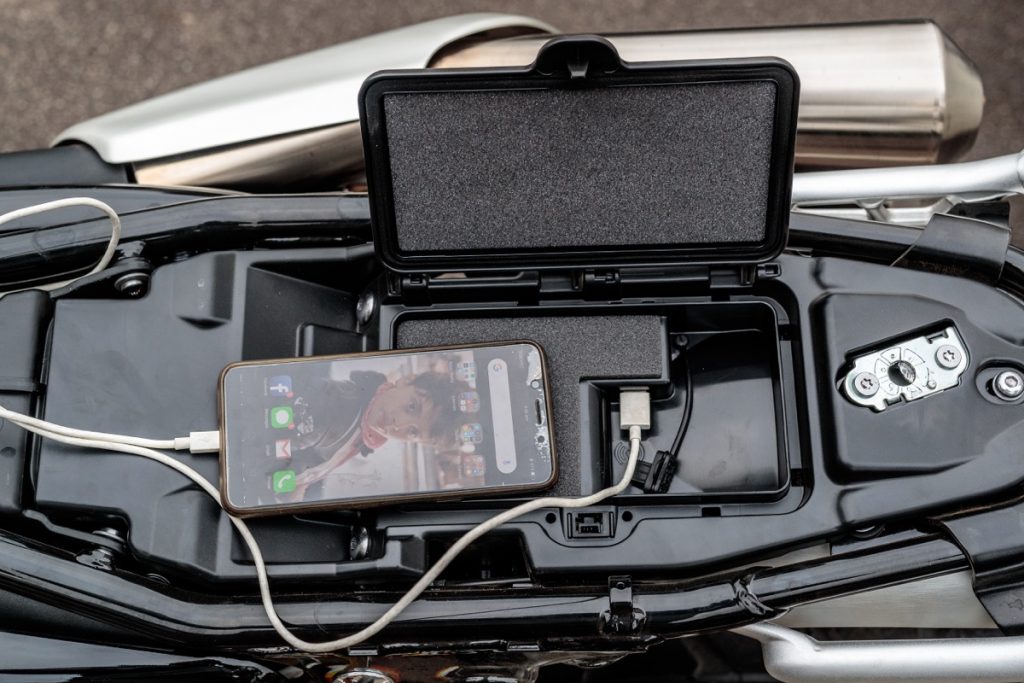 I think most people who will buy the Scrambler XE will probably never take it where it can go. You’ll see it at country pubs, in wine regions and commuting back and forth to work but I doubt you’ll come across one in the bush, which is a shame because it is capable. If you’re looking for a weekend adventure bike for rides that don’t include long bitumen stretches that need a screen, but you do fancy the odd rip through singletrack, then add the Scrambler 1200XE to your shortlist.

GoPro connect
The Scrambler 1200 XE comes with GoPro connectivity which allows you to activate a helmet camera from the TFT dash (below).