We test a unique 1997 KTM 360 EXC to see if its modifications to make it indestructible are up to the challenge.

Extreme enduro’s explosion in popularity has made it completely acceptable to throw your hatchback-priced machine down a rocky cliff without a second thought. It was once frowned upon to crash your pride and joy but now it’s commended, as long as you assert that you are a hard enduro rider. One thing hasn’t changed though, and that’s the laws of physics.

If you cartwheel your dirtbike down cliffs week in, week out it’s going to have some scars. This got us thinking, can you make a dirtbike indestructible? Manufacturers haven’t done much in the way of toughening up their bikes despite most of the brands moving into the hard enduro scene. It’s not a bad business model after all – sell punters $15,000 dirtbikes and then encourage them to crash. So what can be done to toughen up your machine?

There are the go-to crash-proofing accessories that usually include handguards, radiator guards and braces, pipe guards, bashplates, disc guards front and rear, linkage guards, frame protectors, spring-loaded levers, brake snakes and heavy-duty chainguides, to name a few, but what about those precious plastics? One cartwheel can fold your rear mudguard like soggy cardboard. 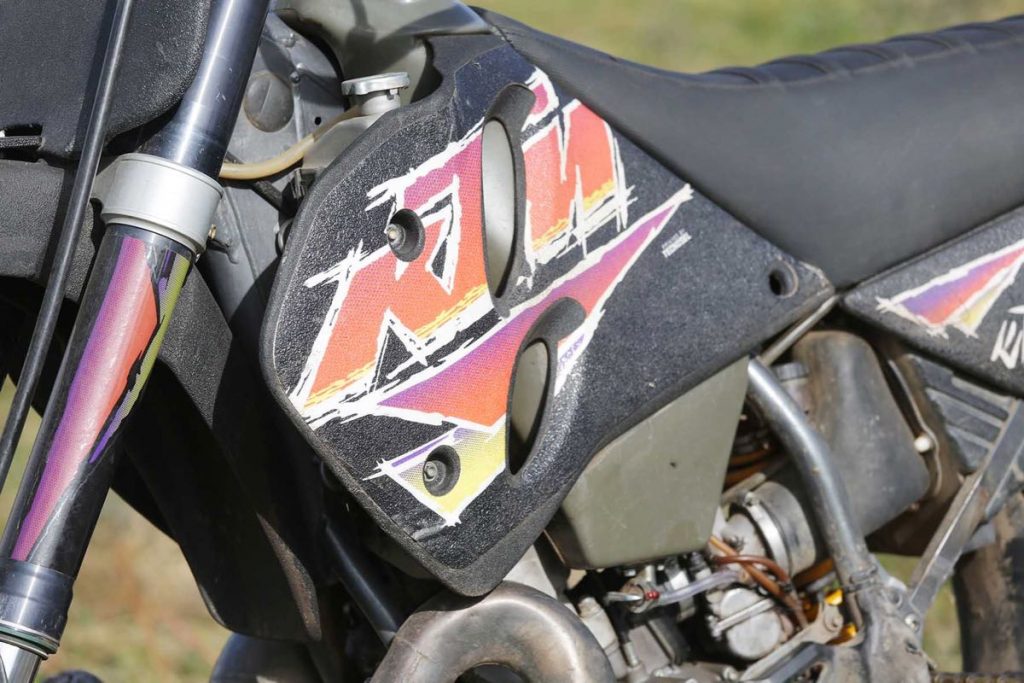 LINE-X on all the KTM 360 EXC plastics 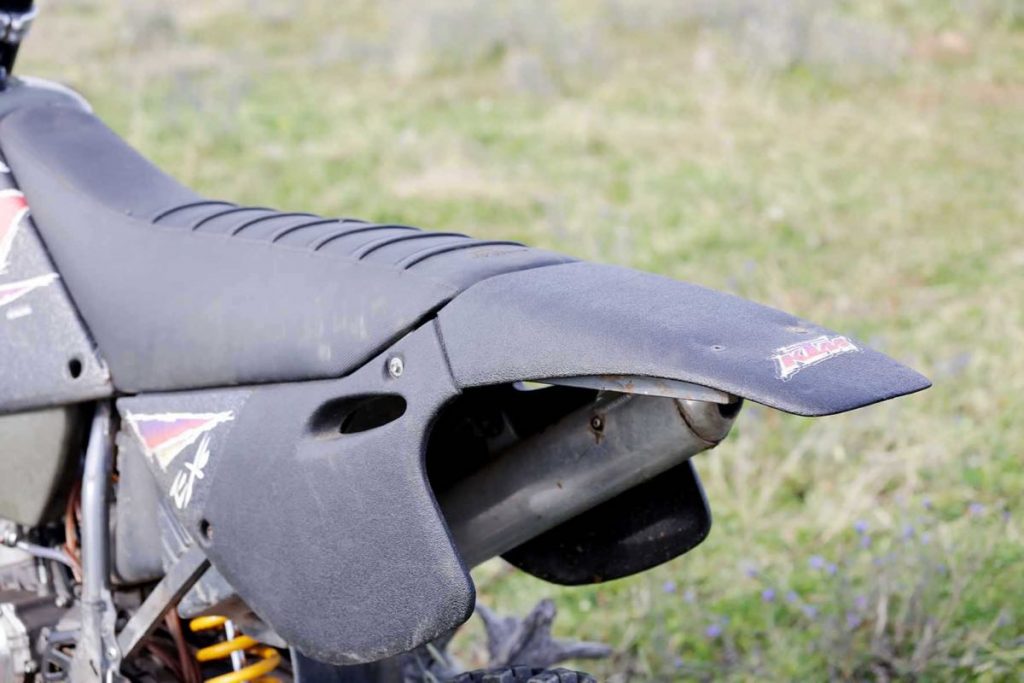 Enter ADB reader Bernie den Hertog. Bernie DH has taken a unique approach to crash proofing his 1997 KTM 360 EXC. He sprayed the plastics with an industrial-strength protective paint from LINE-X. It’s a polyurea protective coating you may have seen used in ute trays. It’s super tough, scratch-resistant and even impact resistant.

In a promo video, the company coats a watermelon with the stuff and drops it from 50 metres onto concrete then tries to smash it with an axe, all to no avail. The watermelon survives everything they throw at it. Robbie Maddison even used it to coat the frame and swingarm of an FMX bike. It comes at a price though. Bernie estimates the coating added 2kg to his Kato.

Even though Mitch is the unofficial ADB crash test dummy, I was given the task of testing Bernie’s “indestructible” KTM 360 EXC at ADB’s private enduro test facility. The extreme loop is perfect for testing the toughness of a bike, because you’re bound to crash at least a few times. It’s a combination of slick, rocky creek beds, steep rocky descents and loose, off-camber hillclimbs. There are no chicken routes either, once you drop in there’s only one way out. 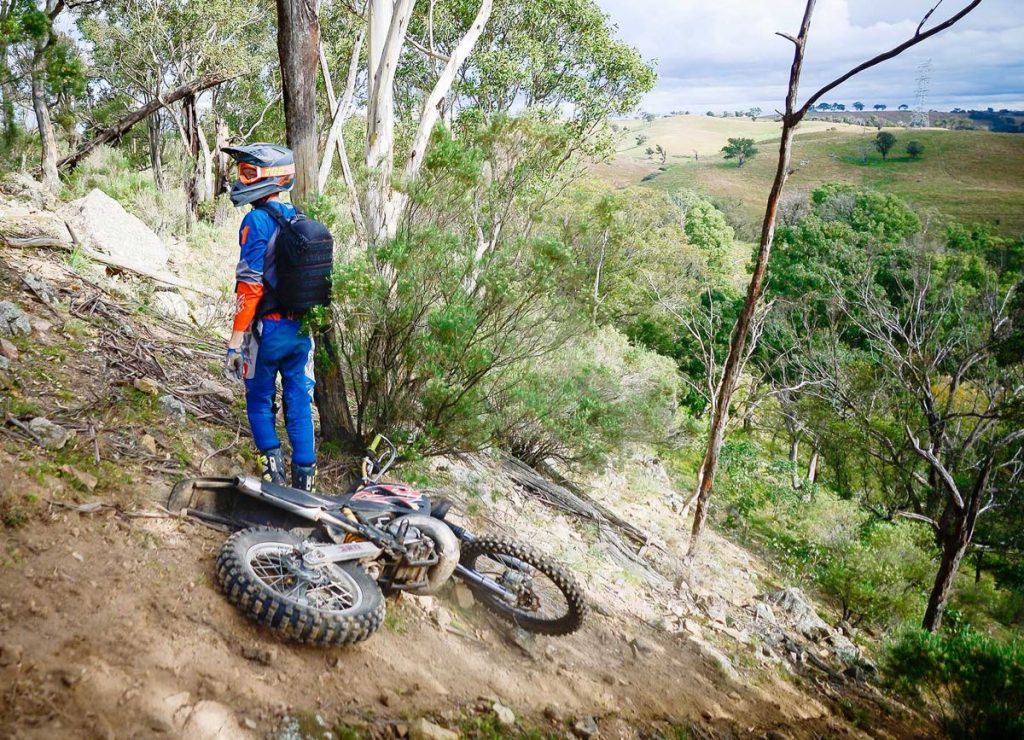 Thirty seconds into the test I low-sided down the first hill I came to and put the KTM 360 EXC on its side. What a start! The hill was so steep the bike kept sliding before coming to a stop at the base of a gum tree. Bernie watched it all unfold so I was worried he’d berate me for crashing his bike but he thought the whole thing was hilarious.

Wraparound handguards protected the levers but the pipe is bare, which produced some unsettling metal-on-rock sounds while the bike slid down the hill. The pipe already looked like Freddy Krueger’s face so I didn’t make it any worse. I picked up the bike and continued on my way, rubber side down.

THOROUGH TEST
I’d never ridden a KTM 360 EXC before this test. The closest bike to it was my cousin’s 2004 KTM 300 EXC, but that was over a decade ago. Even though only eight years separate the pair, they are completely different beasts. I was taken aback by the compression of the 360.

Considering it’s only 60cc more I was surprised how much of a whack it took to kick it over compared to a modern 300 like the 2018 GasGas EC300 long-termer I had. Once going, the KTM 360 EXC is surprisingly easy to ride. My only issue was that, like most old two-strokes, it didn’t idle and that caught me out a few times on downhills. It was nothing a quick flick of the clutch couldn’t fix.

The grunt wasn’t what I expected. I remember early 2000s two-strokes having aggressive power delivery and I was prepared for the 360 to be the same, if not worse. But the 360 has so much usable bottom-end torque I could ride it low in the revs through slow, technical terrain to avoid the snappier mid-range and top-end. Your clutch hand does get more of a workout from the cable, and the 360 did need a fair bit of clutch work when I was riding through slow first-gear trails. 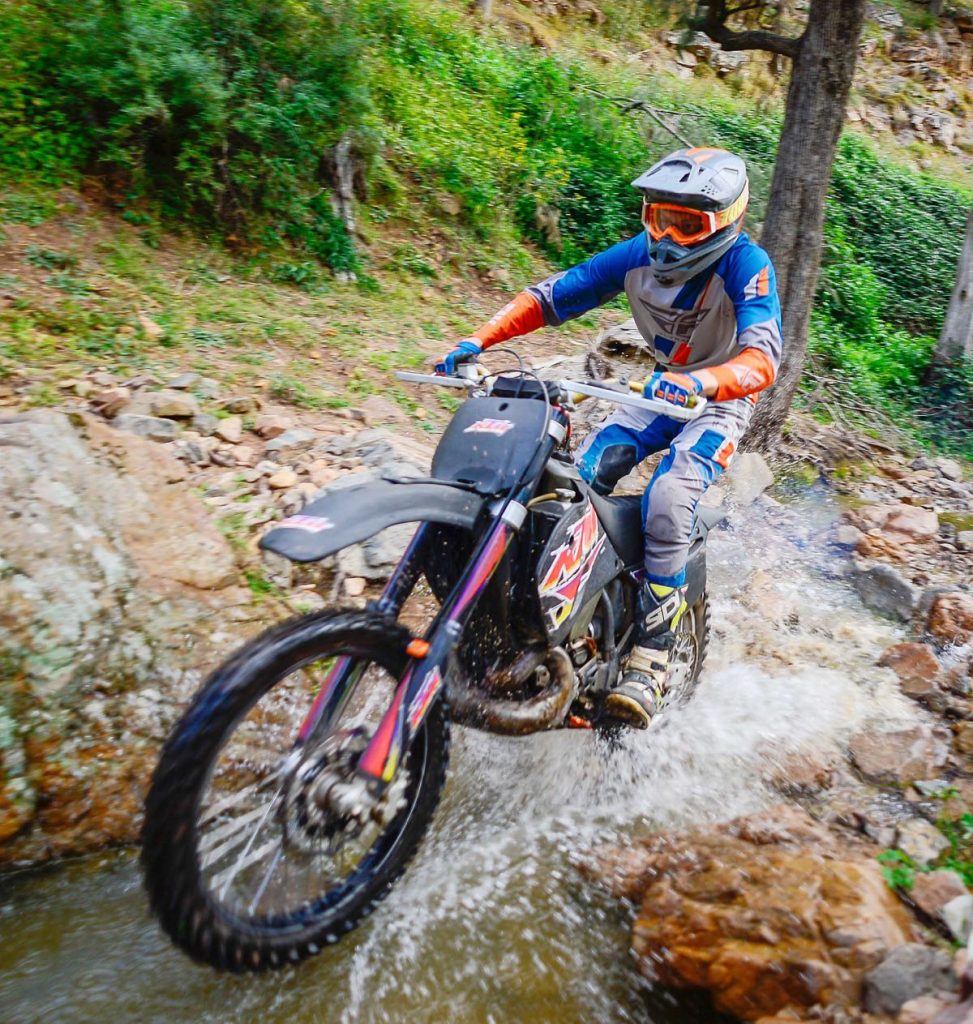 The transition from mid-range to top-end is aggressive in comparison to modern 300cc two-strokes but the wide bottom-end and mid-range gives the impression the top-end doesn’t stretch as far. You don’t have to rev its guts out to get the most out of the engine. Still, my skinny arms pumped up pretty quick around the grasstrack.

Hillclimbs are where the KTM 360 EXC dominates thanks to the abundance of torque. It is 450F-like in the way it effortlessly climbs hills. Bernie had the 360 set up with a high front-end and, on steeper hills, I had a hard time keeping the front wheel on terra ferme. The high front-end combined with the centrifugal forces in the engine meant I had to get right over the fuel tank, Graham Jarvis style, to prevent a loop out. To ensure I thoroughly tested the “indestructible” claims Bernie was making, I decided to loop it out just to be sure, it passed. Bernie has changed a lot on this KTM 360 EXC. The front-end including the triple-clamps, WP fork, wheel and brake system are all from a modern Kato and the fork has Dal Soggio CC inserts fitted.

MODERN TOUCH
Suspension technology has come a long way in 25 years and the modern fork only highlights how good the 360 engine is.

The Dal Soggio CC produced a plush ride over the rough test loop but it stood out the most around the grasstrack. There was minimal deflection over high-speed rocky sections and the fork didn’t collapse under hard braking while entering turns. I did find the high front-end gave the bike a tendency to run wide in turns but since I rode it, Bernie has swapped out the fork for a shorter one to lower the front-end. The Öhlins shock has been overhauled with new valving and a new spring and the rear wheel and brake is from a modern KTM. He fitted an Öhlins steering damper and modern handlebar because we all know how rubbish old handlebars were. And the fuel tank is from a 360SX. 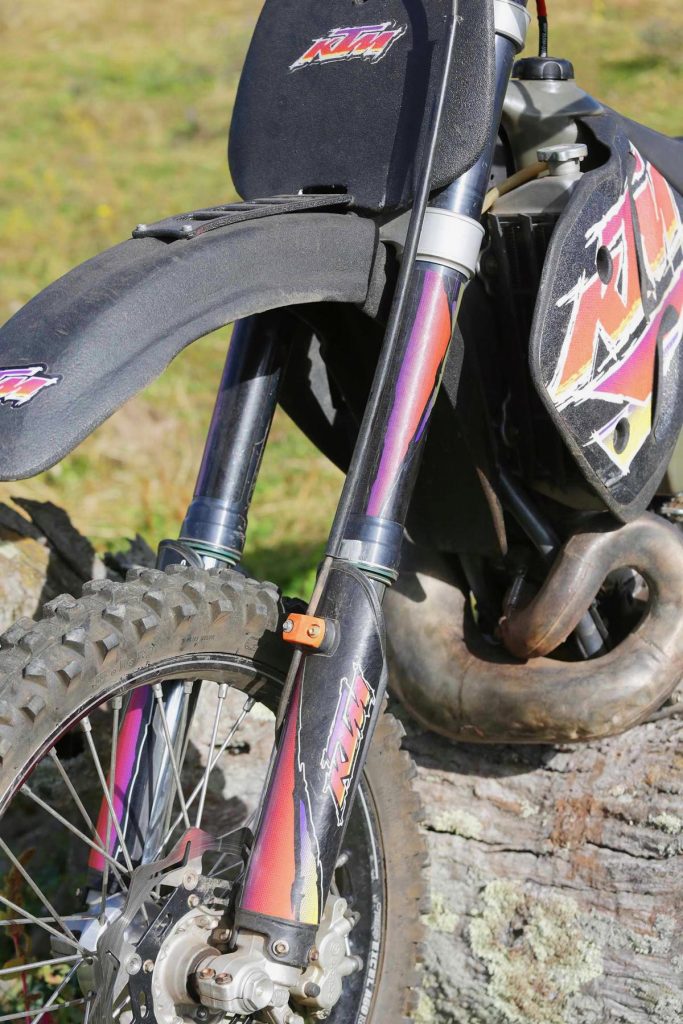 By the end of the ride I was convinced Bernie was onto a winner with the LINE-X coating. I’ve seen many attempts by riders to protect plastics – cloth tape, clear vinyl, duct tape – but none of them can withstand abuse like a purpose-made coating. If you’re sick of scratching or snapping the plastics on your bike and don’t mind having a slightly rough, matte finish, it could be worth your time trying Bernie’s approach.

Bernie owns more than a few bikes but he rides the KTM 360 EXC most of the time. He tells us why:
“A 360 was the first new bike I ever purchased. I bought one in 1996 and rode the wheels off it for 10 years, then sold it. I’ve regretted it ever since, so I had to find another. I bought this 1997 model four years ago and have been pimping it up ever since.

“The 1996/97 KTMs came out with the famous honeycomb coloured plastics (they were white previously). From 1998 onwards, orange plastics have been used. Because the honeycomb colour was only used for two years it’s becoming hard to find. Given they are prone to cracking, fading and developing stress marks, they can look very second hand very quickly.
“I managed to collect an assortment of plastics to suit the 360EXC, white and honeycomb, many of which were old and in poor condition. I got the idea to fix these uP using a soldering iron to melt them together and having them painted in LINE-X.

“I had all the plastics on the bike painted with it, which gives it a slightly stippled finish. It worked better than I expected, mud and dirt simply fall off. It was so good that nothing would stick to it, including stickers!

“For my regular weekly ride, it now has an indestructible set of plastics on it. I thought it was a great idea to future-proof my ride.

“These motors revolutionised the two-stroke world, with Shayne King riding his 360EXC to domination in the 500cc Motocross World Championship. They were a formidable motor that could go toe-to-toe with the big bores and win thanks to the benefits of a 300-sized bike’s handling but the bottom-end snap of a 500. For me the bottom-end pull is its standout feature. They will hillclimb like no other bike. It’s very unfortunate that KTM dropped them from their line up as I suspect many would love one.

“Plus, with the ample horsepower, you don’t need to rev them like a 300 to ride quickly and pistons last forever. In this case the bike has run 100 hours this year alone and is still on the original piston and rings after 24 years.”