Honda has been very busy updating its enduro line-up, unveiling a plethora of new models such as the CRF250F and tweaks to existing ones that include fuel injection.

Being a market leader, Honda doesn’t want to fall fowl of the industry regulators, so it has tried to stay well ahead of emission standards around the world, even for its non-road legal trail and fun bikes. The new CRF250F is one of those and makes an excellent beginners’ mount, but you’ll need recreational registration or private property to ride it. People might think it’s a bored out CRF230F but that’s not the case. Having started as a 100cc bike, it’s a stretch to make the 230 go any bigger and the 230F will remain in production, with a MY20 version to be revealed soon. 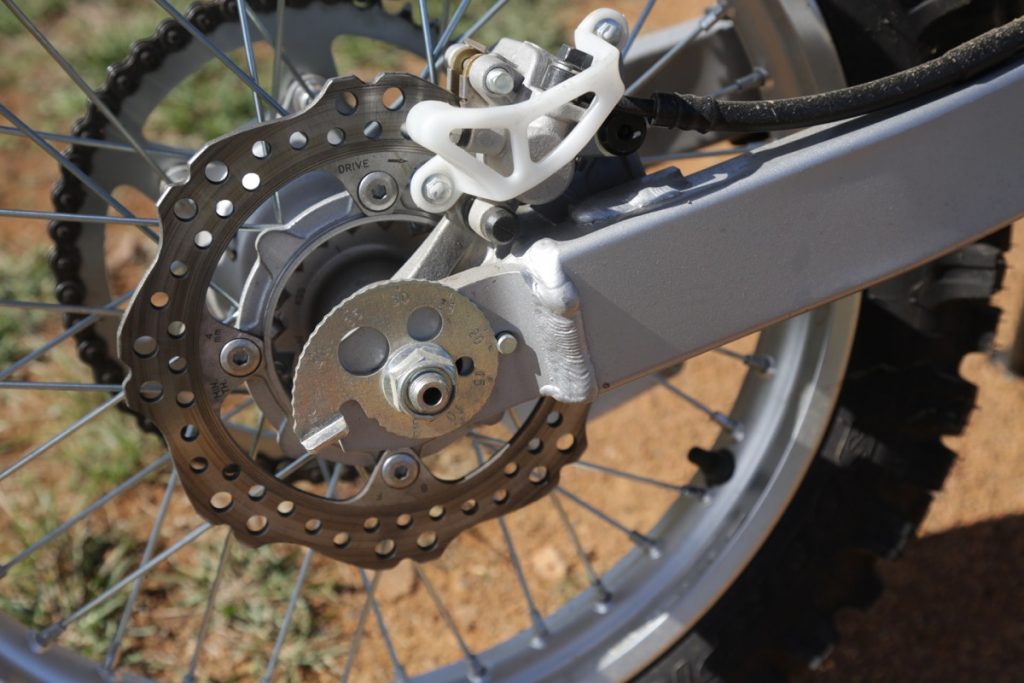 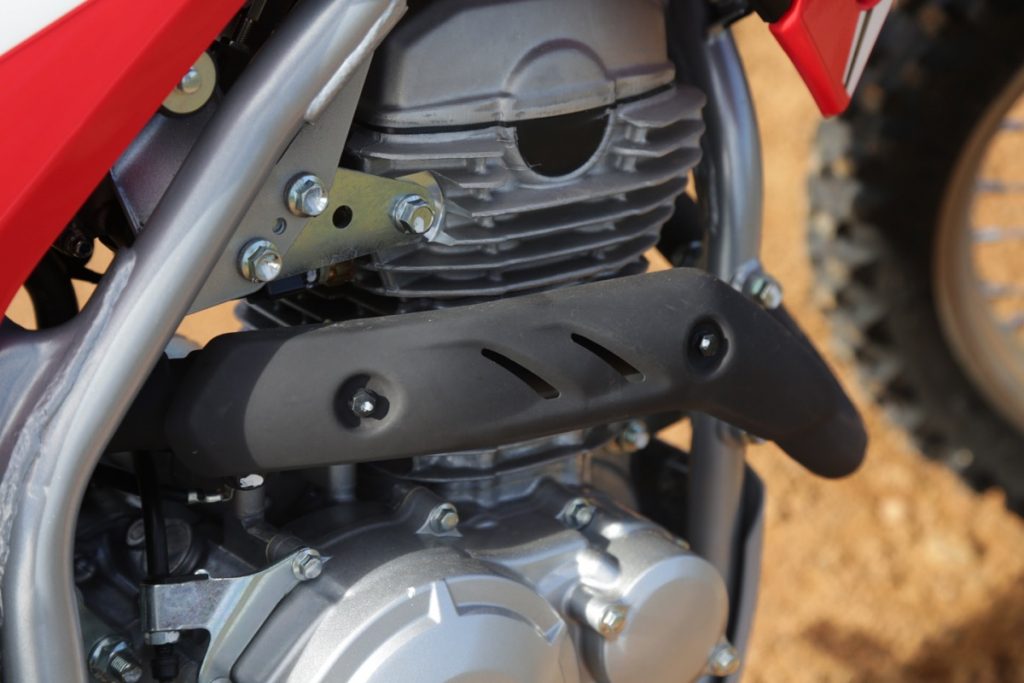 A new tubular steel frame works with a 41mm conventional fork (up from 37mm on the 230F) and Honda’s proven Pro-Link monoshock has been completely revised and has 230mm of travel with preload spring adjustment (I had one in my first XR back in the early ’90s) to deliver a great trailbike feel. Honda has gone with quality running gear as well, including a set of hydraulic brakes front and rear (the 230F only has a disc on the front), a five-speed gearbox (as opposed to the 230Fs six-speeder) and electric start. The bike has also been given similar styling to the CRF motocross range and a handy low fuel light (no petrol tap) and “key on” indicator light.

The CRF250F looks, to the untrained eye, like a CRF230F with fuel injection. It’s a similar size (about three-quarters of full-size) with a low seat of 883mm and conventional suspension. However, after a quick squirt up the driveway, it was obvious the CRF250F is significantly different.

It has more power than the 230F right through the rev range and the EFI makes it more responsive. Having EFI also means starting is a breeze. There’s no long waits to go riding on those cold mornings or if you’ve had a tip-over. It sports a smaller fuel tank than the 230F (down to 6L from 7L) but Honda claims the EFI system actually gives it more range than a 230 (there is no speedo so testing this is difficult) while also reducing weight up top. 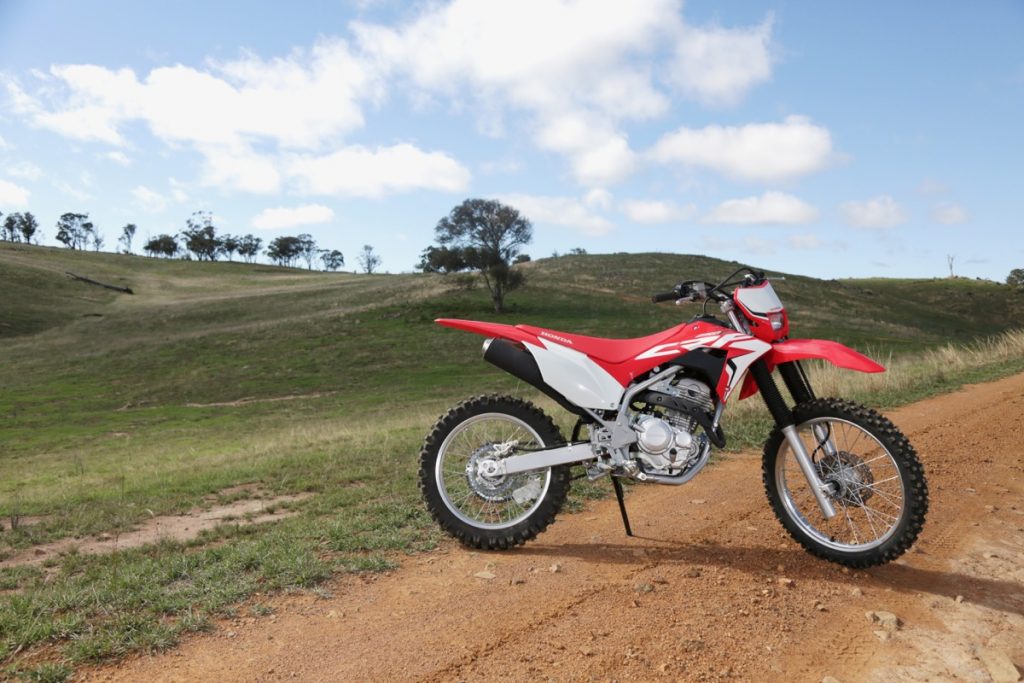 At 105kg in my gear it seemed unfair for me to test this bike so I employed the services of my sister in-law, Bec. Bec has been keen to get into riding ever since she stumbled across my brother at a B&S and found out he was related to the Editor of ADB magazine.

She had her first crack on a dirtbike a few years ago at our farm and was bitten by the bug. She’s been eager to learn how to ride a dirtbike properly but we don’t usually have beginner bikes floating around at the magazine. That was until Honda revealed the CRF250F.

So I kitted Bec out in some fresh threads, handed her the reigns of the CRF250F and sent her off into the paddocks to get acquainted with the user-friendly trailbike.

ADB: When you sat on the bike, did it feel comfortable? Was the seat too tall and could you reach the ground? Did the bike feel too heavy?
Bec: This was only my second time on a bike, but I felt in control and very comfortable. When I went over bumps the seat was well padded and provided a soft landing. The seat was at a perfect height because, at 170cm tall, I could still get both feet on the ground, which made it easy to balance the bike. It didn’t feel top heavy when stopped or when riding but, after my little stack, it was harder to pick up than a 110 or 150. It actually felt really heavy but after a few goes at it Mitch showed me the right way to pick a bike up (by the bottom grip) which made all the difference! Turns out it wasn’t that heavy after all (120kg wet, up 7kg on the CRF230F). 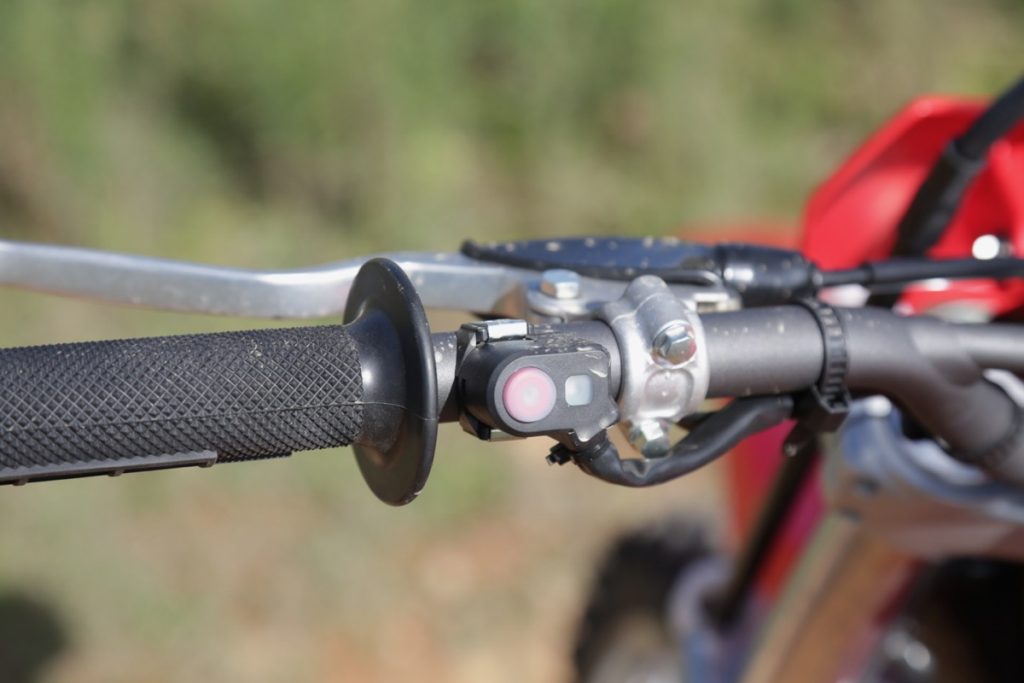 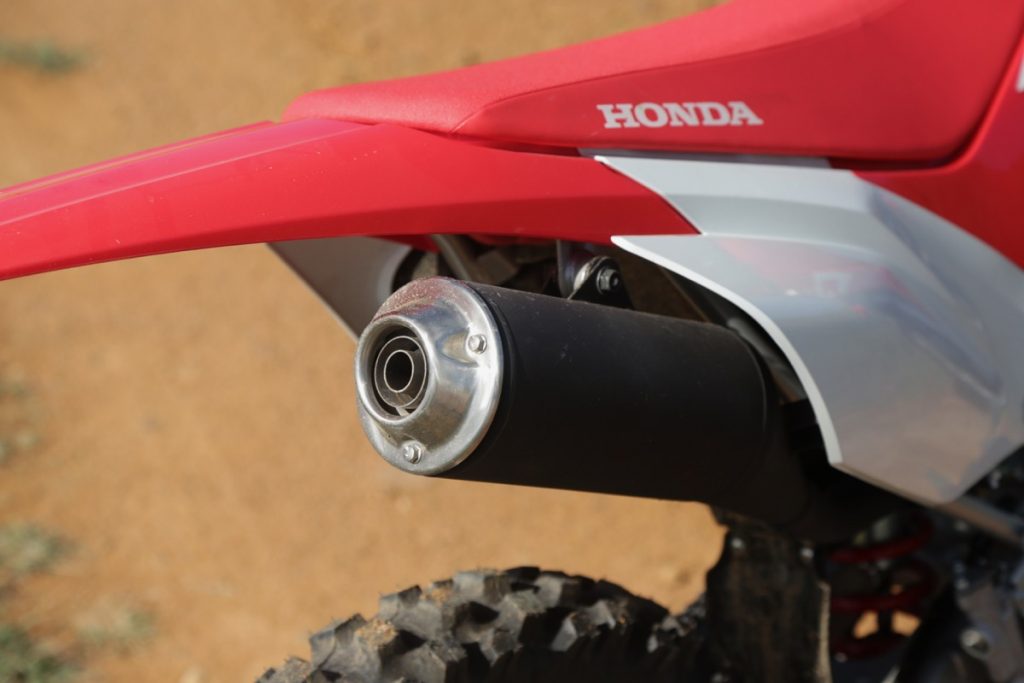 ADB: Was the power manageable? Did you ever feel out of control?
Bec: When twisting the throttle, the power came on straight away, making it easy to manage the speed because there was no lag. At times I would accidently twist the throttle over bumps and speed up, but I slowly got used to controlling my hand over bumps. The gears were easy to change and helped with managing the speed.

ADB: Did the power allow the bike to rev really low without stalling? Was the throttle too touchy?
Bec: Going around all of the corners for the first time I went really slow and the bike was able to rev really low without stalling, which is great for a beginner. I also went really slowly over my first rock pass with my feet on the ground, using the clutch and throttle to move slowly. This was easier than I thought, I didn’t stall the bike or loop out because the throttle was easy to control. The throttle on the bike was easy to get the hang of and the power delivery was really linear but strong.

ADB: Did your hands or arms ever get tired from pulling on the clutch? Were the brakes too sensitive or did they feel just right?
Bec: When starting and stopping the bike, I only ever used the front brake as this felt more comfortable to me. It was easy to slow down and to come to a smooth stop using the brake and clutch. I had to use two fingers for the clutch to get a good grip on it and, despite using it all the time, my hands and fingers never got sore. As a beginner, the bike was easy to manoeuvre and get the hang of quickly. Everything was comfortable, and it was so much fun, I can’t wait to do it again. 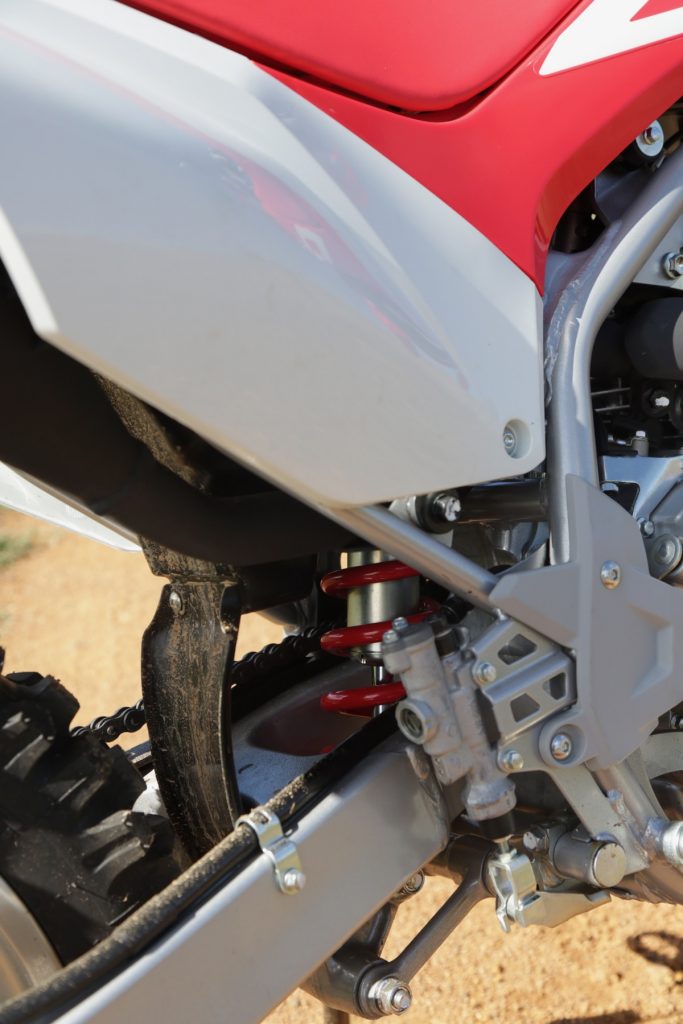 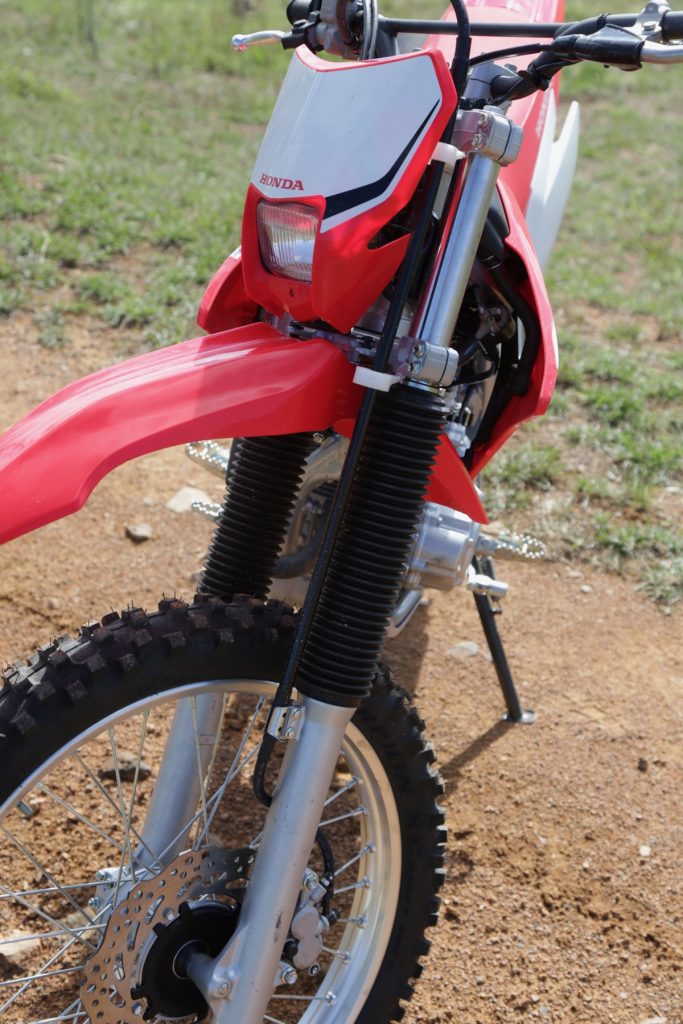 ADB: How did the suspension feel? Was it comfortable and/or was it too stiff? Was it too soft or spongey?
Bec: On the bike track, there were bumpier sections and small inclines. At first, I was hesitant as I didn’t know how I would go on the bike but every lap I got faster and more confident as I knew the bike would provide a soft ride. After a few laps on the track we did some riding in the paddocks and over a few rock passes. I went slowly over these and thought I’d fall off and that it would be really bumpy. The bike went straight through and I felt very sturdy on it, the suspension was good, and I hardly felt any of the rocks.

While on a gap year many moons ago, my brother (Bec’s husband) went and worked on a farm in Mt Surprise, Qld. When the station hands found out that he knew someone on ADB they bombarded him with questions about when the XR was coming back and why had Honda got rid of it.

These farmers used XRs to chase scrub bulls through the bush on hot summer days as, being air-cooled, they wouldn’t overheat. They would ride up alongside the bull and grab its tail to slow it down or corner it between trees using the bike as a shield, so they needed durable dirtbikes that could be stomped on, charged at and cartwheeled as well.

While the Honda CRF250F doesn’t have the power of an XR400 it has similar, if not more, power than the XR250. It’s air-cooled, reliable and bullet-proof with an electric leg that looks like it could survive a nuclear blast. It’s certainly better equipped for chasing scrub bulls than the CRF230F or $6099 CRF250L. So if you’re looking for a reliable ride that can take a beating but still gets up and motors then, maybe, the Honda CRF250F could fill that XR-shaped hole in our farmer’s hearts.