With KTM Australian announcing the MY18 range of carburetted KTM EXC two-strokes will be the last of their kind, we look at the 2018 KTM 300 EXC and what made the carby-fed 300 such a dominant extreme enduro machine.

My earliest memory of extreme enduro involves a few unlikely characters, Travis Pastrana being one of them. I was absorbing my daily dose of Fuel TV and on came Nitro Circus. Pastrana was at the 2006 Erzberg Rodeo and, despite having no extreme experience, he was attempting one of the world’s toughest on a Suzuki RM250 motocrosser!

Pastrana didn’t finish Erzberg but, if anything, that made it more entertaining. Something about the toughness of the terrain and unbelievable skill of the riders got me hooked. It was like nothing I’d ever seen.

In the 11 years since, the genre has exploded and extreme enduro riding now has its own pro riders with big-dollar factory contracts. The European manufacturers continue to pump out two-strokes designed for the toughest races on Earth, with the prospect of tougher emissions laws and obligatory fuel-injection the only cloud on the extreme horizon.

In issue #451 we compared Beta’s 350cc four-stroke with their 300cc two-stroke as extreme machines, and concluded the 300cc two-stroke is the better extreme mount, but we didn’t delve into why. So we took this opporuntity to really analyse the two-stroke’s extreme capabilities and why they’re so damn popular! 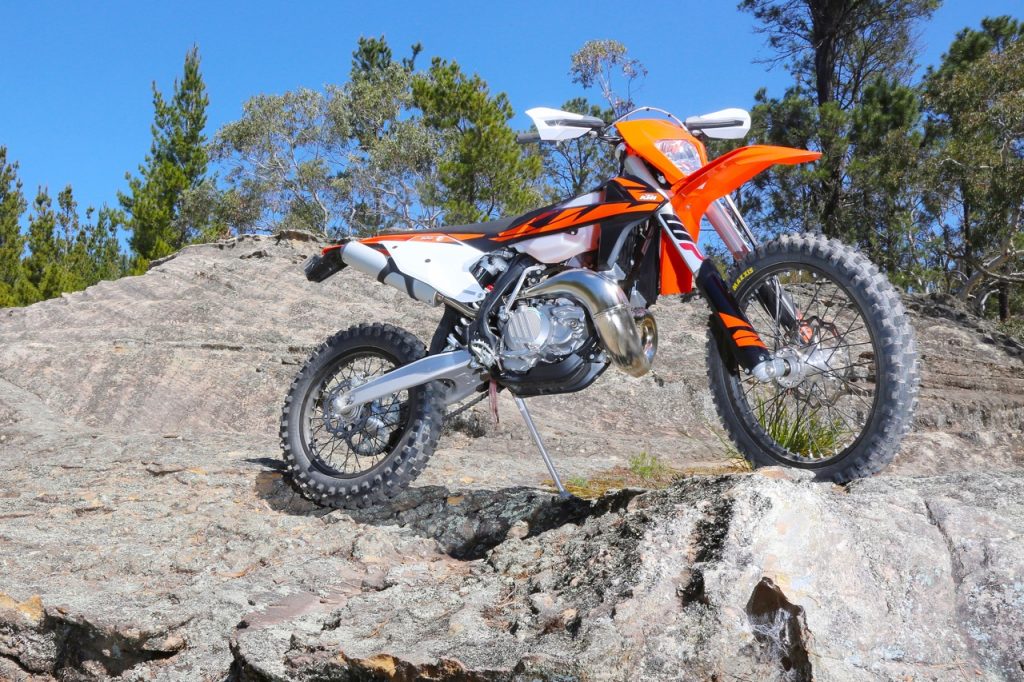 ORANGE ARMY
Developing fuel-injection for two-strokes has been an engineering nightmare. When four-strokes started using EFI some lost their ability to lug down in the revs and flame-outs became a problem. ADB Ed Mitch Lees rode the new Transfer Port Injection EXCs at the international launch at Erzberg (ADB #454) and you’ll be happy to know that problem doesn’t appear to plague the KTM two-strokes.

The 2018 KTM 300 EXC is largely unchanged apart from a switch to lighter outer fork tubes and graphics. KTM responded to complaints about the jetting of the 250 and 300EXCs with a new intake manifold which rotated the Mikuni TMX38 carburettor by seven degrees to reduce overflow. It’s also claimed to be less sensitive to altitude and temperature changes.

WEIGHT
Every kilo counts when the trail gets tough, so weight is the main reason why two-strokes are the preferred weapon for extreme. The 2018 300EXC only weighs 100kg dry. Although the weight difference to the four-strokes is reducing, a 2T’s advantage goes beyond the scales.

Two-stroke engines have less rotating mass, making them spin up faster and slow down more quickly. I get far less fatigued when wrestling a 2T compared to a 4T. It can be difficult to explain exactly why two-stroke engines cause less fatigue in gnarly terrain but, from my experience, 2Ts are more willing to rev-up quickly and are easier to stop without a huge amount of effort.

An EFI four-stroke can also flame-out, leading to all sorts of problems if you’re about to crest a rock ledge. Even the simple pivot turn, a crucial skill for extreme enduro riders, requires more effort. 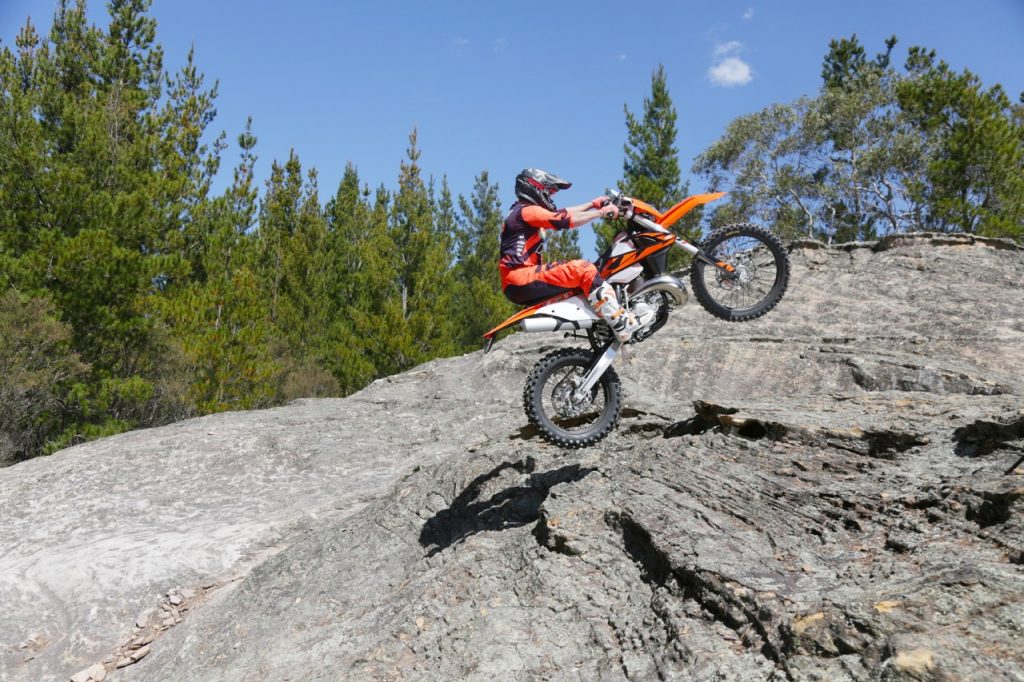 TORQUE
A huge part of why the 300EXC is suited to extreme enduro is the torque it produces right off idle. Where a 250F or 350F needs to be kept at higher revs to produce usable torque, the 300EXC will chug along on the verge of stalling and still have enough torque to pull you up a hill or pop the front wheel over a log. This again goes back to minimising fatigue, a slower revving engine is easier to control.

However, open up the 300EXC and it’s devastatingly fast. Lyndon Snodgrass claimed the 2017 Australian Off-Road Championship E3 title on one and they’re raced at Finke and Hattah.

Where the two-stroke can bite is in slippery terrain or if you’re riding with an average rear tyre. Because the engine produces so much torque and is eager to spin up, the rear wheel can break traction and induce a surge of power without even adjusting your throttle position.

In this situation, the TPI bike might have an edge because of its smoother power delivery but it’s nothing a bit of clutch and throttle control can’t fix. Nothing about old-school two-strokes was smooth, they’d rattle the fillings out of your teeth and it was only in 2016 that KTM got this under control.

The balance shaft has almost completely eliminated vibration through the bike and you can rev the 300EXC all day without pins and needles setting in.

It makes long rides more comfortable and until you’ve tried it, you don’t know how good it is. 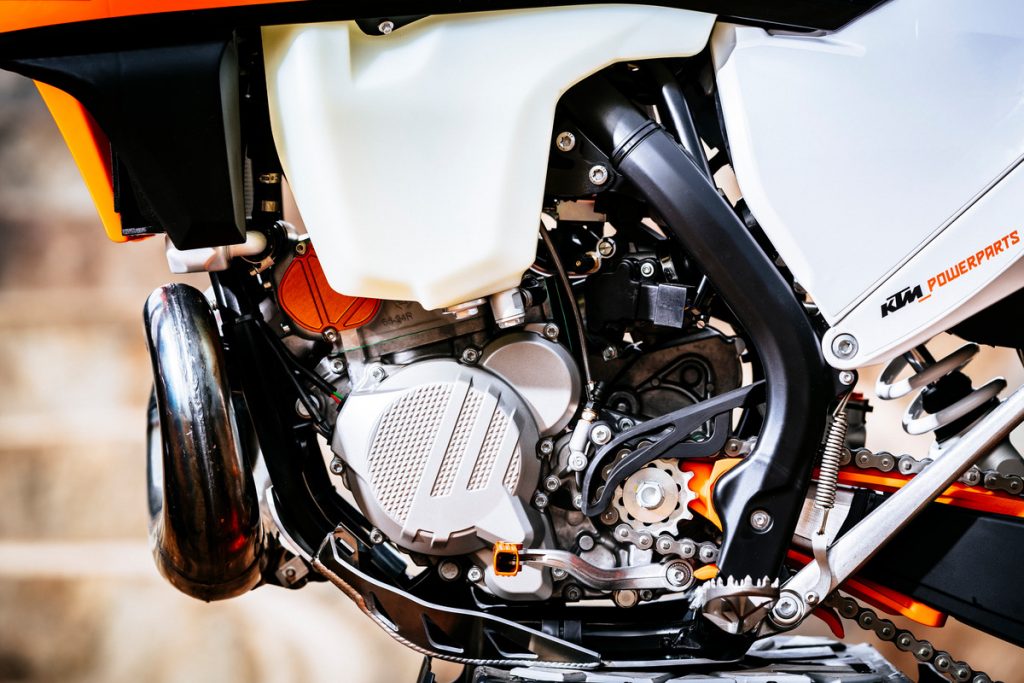 EXC Two-strokes will only be available in TPI from 2019

RESILIENCE
It’s been a long time since I’ve been on a ride during which a four-stroke went pop, but that day spent dragging a 450F out of a gully seared into my memory. Two-strokes have a reputation for toughness because there’s less going on inside and that’s why they’re the pick when it comes to bike-boiling, torture rides. Despite flashy plastics and exotic marketing jargon, the 300EXC is a simple machine.

When KTM announced it was installing electric start, keyboard warriors went to town, claiming anyone who needed electric start on a two-stroke shouldn’t ride. Those same people were quick to change their tune once they tried it for themselves.

The first, magneto-mounted electric starts had dramas. Often on the side of a hill, balancing on the edge of a rut with no room for error the starter motor wouldn’t engage. It was always when the bike was in gear and at those critical moments when you’re a bee’s dick away from losing your balance you needed it to work.

KTM also solved this issue for the 2017 model year, when it added the balance shaft, with an underslung starter motor and now the magic button works perfectly every time.

SUMMARY
The current crop of professional extreme riders aren’t using two-strokes just for the hell of it. For the difficult terrain they find themselves in, the 300 smoker is still the ultimate machine. The 300EXC’s 100kg dry weight, paired with the smooth but torquey engine, electric start and simple design, is one of the best choices.

But the 300T isn’t a one-trick pony, if you find yourself riding fourth gear terrain more than walking your bike through rock beds in first, the 300EXC still caters for you. But for those moments when you wish you were back at the car with a beer in hand, but instead you’re wedged between a rock and a hard place you’ll be thankful you’re not hauling a four-stroke out of there.