We send ADB Enduro Editor Geoff Braico and a trail punter in 'blind' to see if they can pick between the KTM 450 EXC-F and 500 EXC-F.

“We’ve got both bikes ready, no stickers, compliance plates covered up and all you have to do is pick which bike is which in a blind 450 vs 500 test.” That’s what ADB editor Mitch said to me as I geared up for this test. I thought to myself, “how hard can it be?” I glanced over the bikes and, from the outside, they were identical. Everything looked the same. Grabbo had taken the stickers off the rear guards and had the bikes prepped to perfection. On one side is KTM’s biggest seller, the 500 EXC (back when this article was written), and the other is its little brother.

As I fired up the bikes, I noticed one was more quiet than the other. I then set off on the first bike and cut a few laps with Vegsy in toe. The five-minute track had everything. A fast section which enabled me to really wind the bike out, it had some flowy sandy singleline sections, and a few tight sections.

We swapped over and I immediately felt the difference between the two bikes. One was clearly more aggressive and pulled harder than the other. That’s got to be the 500, right? More cc’s, more power, faster, more aggressive bike, right? It’s actually quite the opposite in my opinion. In stock form the 500 is probably the easiest bike to ride out of any of the enduro models. It has a brilliant motor that is smooth and very useable which gives the rider a lot of confidence.

Now, the 450 has quite a different feel. It revs faster because it has less inertia inside the motor due to having a smaller capacity. It sounds different too. Either because you are higher in the rev range or due to it being more aggressive. Either way, it’s definitely the angrier of the two.

The 450 EXC is 111kg without fuel and the 500 EXC is a whole 500g heavier at 111.5kg. I couldn’t notice the weight difference when simply pushing the bikes around but you do notice the weight when riding them. The 450 feels lighter to throw around purely because their is less internal inertia produced by the motor. But in saying that, the 500 doesn’t feel heavy by any means.

Switching between the two I started to question whether I knew which bike was which. They both handled great and the motors fantastic. I did multiple stints on each bike and by the time a decision had to be made, I believed I had the right answer. I then did a quick speed test up the road before I handed in my verdict just to be sure.

I arrived back at the van with my mind made up. I thought I would pull a sneaky on Grabbo and pull back the headlight and look at the compliance plate. But Grabbo was smarter than that and had taped it up. He obviously would have done the same thing in my shoes.

Time for my verdict. “This one is the 450…?” I tentatively said. Silence… Grabbo then proceeded to tell me the one with the KTM sticker on the front guard was the 450. I ran around to the front of the bikes and I was delighted to see that I had picked correctly. What a relief. I was stoked.

This test may sound easy, but it definitely was a lot harder than I expected. The 450 feels light and aggressive yet still does most things right. While the 500 is just so smooth and has such a useable engine. Both bikes are great out of the box. They are easy to ride and are just all-round fun to ride.

What bike would I recommend to get out of the two you might ask? Well, in a perfect world, I’d have both. They really are great machines and it’s so nice that you can buy these bikes and go riding with great confidence straight off the showroom floor. Geoff Braico

Unbeknownst to me, my first lap was on the 500EXC. Instantly I thought this bike was easy to ride, it didn’t feel big and heavy like you’d think a 500 would and the suspension was smooth, especially the front-end.

As soon as I threw my leg over the 500 it shocked me how small it felt. It didn’t sound like a big, powerful machine and it looked exactly the same as the bike Braico was riding, the 450. The 500 packed heaps of torque, it felt like a big tractor through the bush, but at the same time handled the tight custom built singletrack with ease. For a big 500cc machine I found it easy to manage and surprisingly didn’t get into too much trouble. 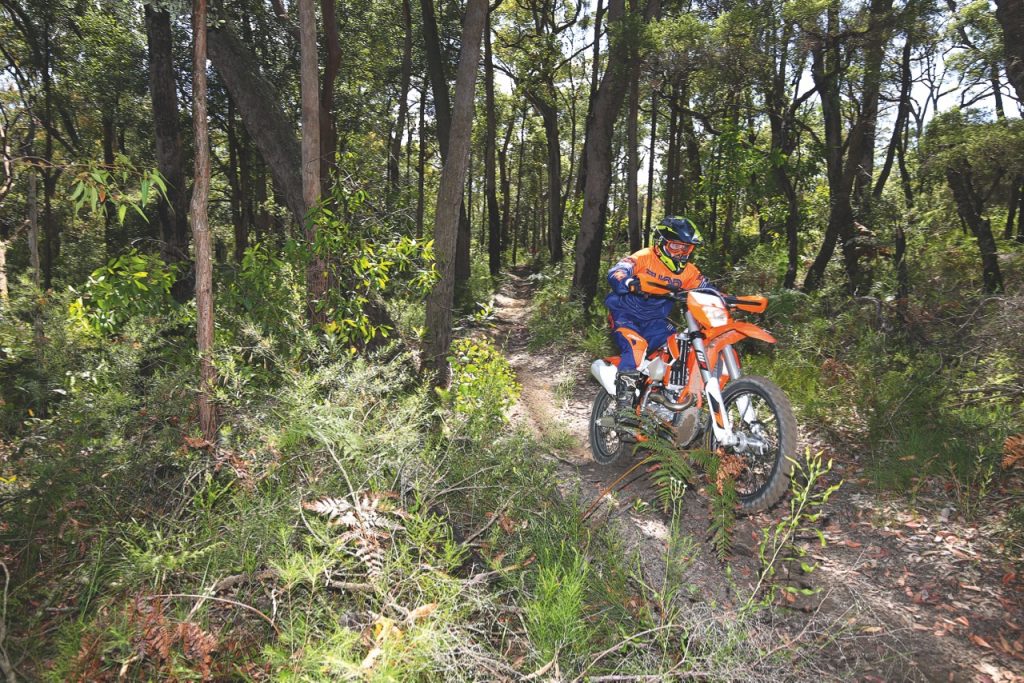 After sitting down for a much-needed short break, I was back at it on the 450. Straight away I felt the difference in the power delivery. The 450 was more responsive on the throttle and felt like it was revving a bit harder than the 500 but the suspension was smooth and I couldn’t pick the difference in the handling.

What stood out most that it felt like it had more power than the 500. Both bikes had power when you needed it, but this one seemed to be quicker to apply. So much so I almost collected the first tree on one of the faster/straighter parts of the trail. I actually found picking which bike was which much easier than Braico. Maybe because my “getting there” speed revealed more differences in the engine, or because I’ve been reading ADB religiously for seven years and have read that the 500EXC is actually more docile than the 450.

If asked which bike I’d prefer to ride for a weekend with my builder mates, I’d pick the 500. In a straight-up 500 vs 450 test, I found the 500 EXC engine was easier to manage or, maybe, it was just a case of having the biggest possible capacity in your garage for when your mates come over for a beer… You know, like your mate who owns the V8 six-speed manual ute!

Just in case you hadn’t noticed, I’m not a fan of the SWM RS500R’s seat. It’s bone hard and plain uncomfortable for any ride much further than Maccas.

The new F 850 GSA is actually a big bike. It looks and feels big when you heave a boot over it and it’s 244kg wet if you weigh it. I’d spent a lot of time on the F 800 GS but not much on the Adventure version. The new bike looks great, much better than the 800 GSA which was a

We test two beginner-friendly four-stroke trailbikes, the Suzuki DR200S and Kawasaki KLX230, to see how the two compare.