Kawasaki rider Adam Cianciarulo put his KX450 on the podium for second overall after earning 3-5 moto scores at Pro Motocross Round 2.

In the 250 class, Pro Circuit/Kawasaki rider Cameron McAdoo put together two solid motos to earn the best overall finish of his career with a fourth-place overall (4-5) and teammate Mitchell Harrison earned seventh overall (6-10) on the day.

As the gate dropped on Moto 1 in the 450 class, Tomac surged out front in fifth, while Cianciarulo found himself mid-pack in 14th. Tomac continued to charge through the slop, quickly making his way up to second by Lap 4. Late in the race, Tomac was unable to continue however, he had completed enough laps in the moto and had lapped enough riders for a ninth-place finish. Cianciarulo found success as he maneuvered his way forward to reach seventh halfway through the moto but didn’t stop there, as he went on to pass three other contenders to finish on the podium in third. 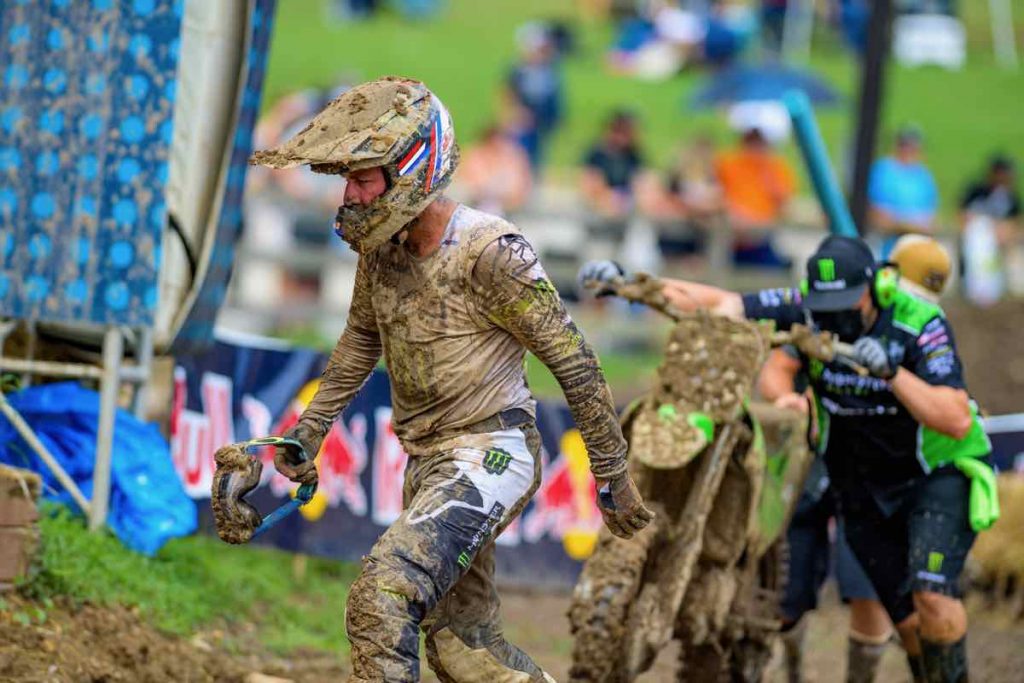 Moto 2 saw both Kawasaki’s launched out front, but the mud and standing water blinded much of the field around the first corner and the riders mistakenly clipped each other causing Tomac to tip over and remount in last place. Acknowledging consistency is key to a mud race, Cianciarulo held his pace to finish fifth, awarding him his first career 450 class podium with a second-place overall (3-5). “I’m pretty stoked with how today went. I was able to put together a couple of solid motos in absolutely brutal conditions, but I was so motivated after crashing and losing my lead last weekend,” said AC. “I would say all the work over the week and that motivation paid off after grabbing my first 450 class podium in Pro Motocross with second overall on the day. I can’t thank the entire Monster Energy Kawasaki team enough for all their hard work today.”

The defending champion wouldn’t go down without a fight as he muscled his way all the way up to sixth just behind Cianciarulo, but once again, Tomac’s race came to a premature end as he ran into misfortune yet again and finished the day 16th overall (9-24).

“That track really threw a lot at us today,” said Tomac. “It took everything I had just to keep it on two wheels and charge forward. I had decent starts in both motos. A lot can happen in a mud race, so I knew I just needed to keep charging and make up positions. Obviously I’m really bummed with the way it ended, but we’ll move on to Ironman and get back to where we belong on the podium.”