For the last two years, the Australian Off-Road Championship has been dominated by the two Daniels.

The young Victorians have swept their respective classes, winning all the rounds on their way to each winning an E2 and E3 title on a Husqvarna FE 501 and KTM 350 EXC-F.

They have also put on a clinic for the unofficial outright honours. In 2018, Milner got the better of Chucky for the overall but, last year, Chucky lifted his work rate and took the outright from Milner.

And it’s not just the AORC that these boys have dominated, with both sticking it to the best in the world at the International Six-Days Enduro. After winning his 2018 AORC title, Milner travelled to Chile as part of our World Trophy team and showed everyone in the enduro world that he was the top dog, winning the event overall by over a minute and earning himself the title of “fastest enduro rider in the world.”

Fast Forward to 2019 and, at the ISDE in Portugal, Chucky took over that title. 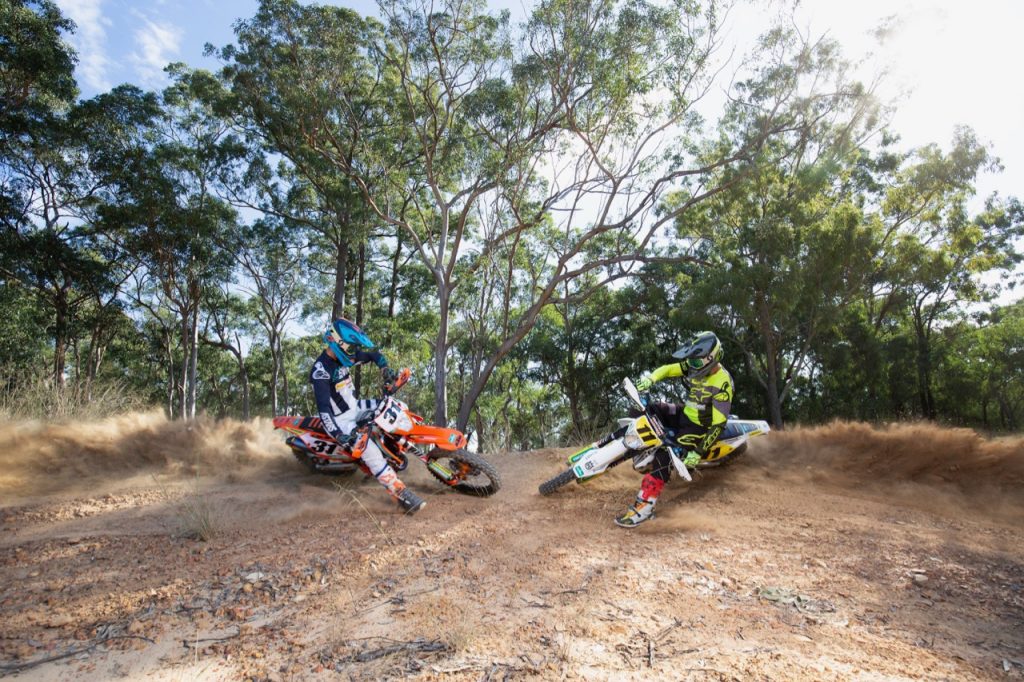 PACE LIFTED
After finishing third overall in 2018, he went to Portugal with the goal of being the best, and won outright by more than a minute while Milner took some time off for the birth of his first child. These two guys have lifted the pace of enduro and it’s pretty damn cool to see it happen in our backyard. Of course, none of it would be possible without solid teams and solid motorcycles.

Milner has been a part of the KTM Enduro Racing Team since 2017 and Chucky a part of the Husky one since 2018 and while both are operated by the same company, they run their own shows. I got to find out how different they are when I spent a day riding their race bikes back-to-back. I didn’t want to stop.

Since the bikes share the same DNA, there is obvious similarities between them that are clear when you first take a look. Both run Dunlops, WP 48mm Cone Valve forks and Trax shocks, custom FMF exhausts, and are littered with KTM and Husqvarna colour co-ordinated bling. 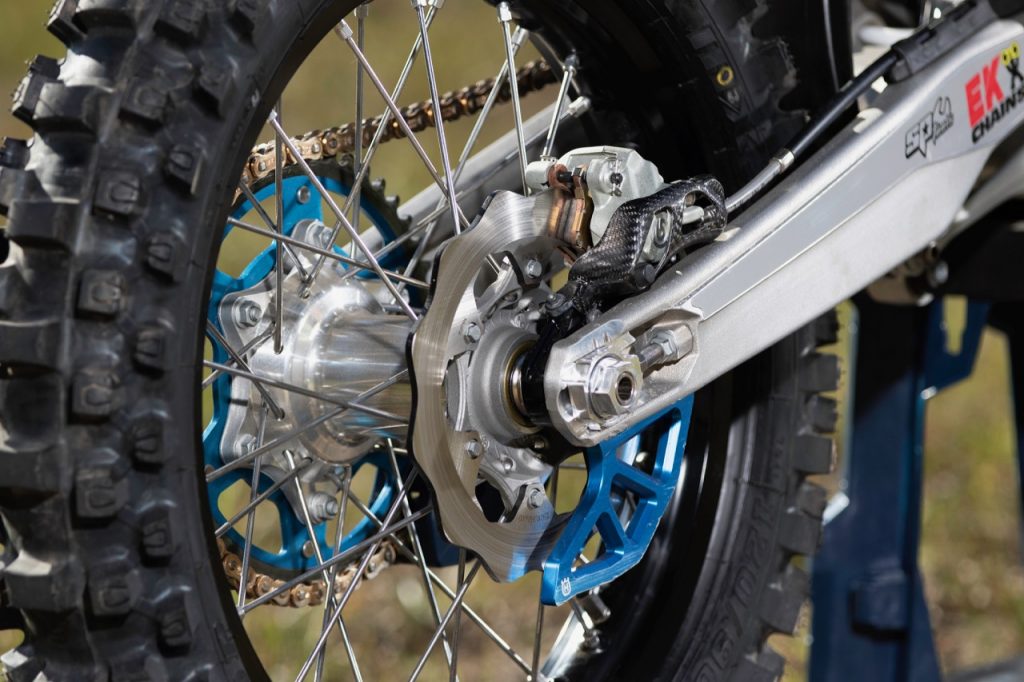 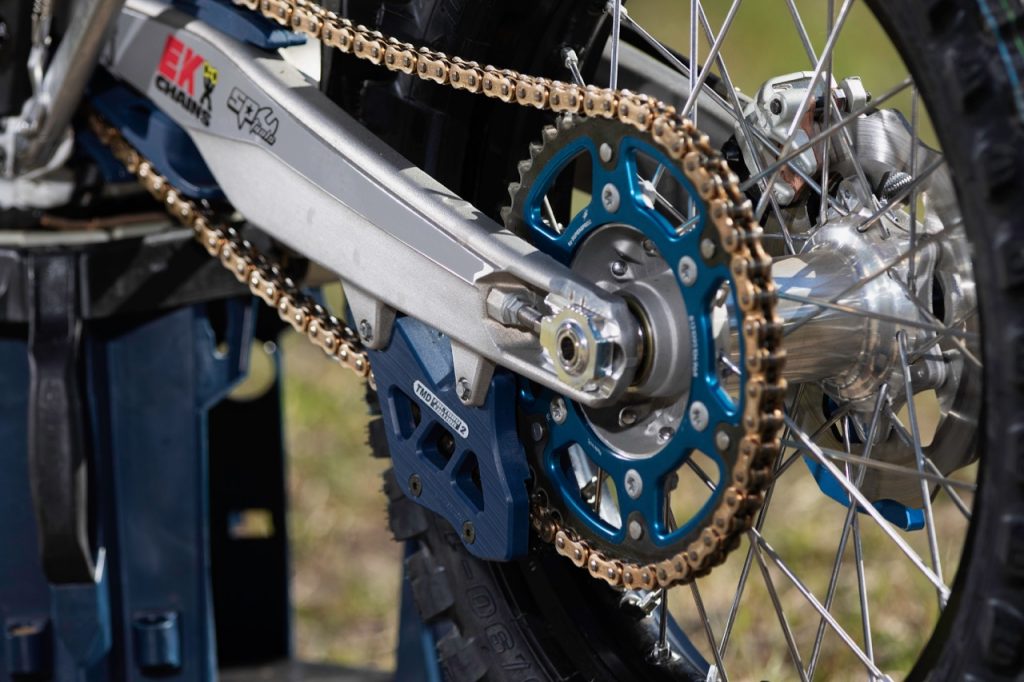 I gotta say the men behind the work, Lewie and Mick, must have some serious elbow-grease muscles because, damn, the bikes are shiny. The KTM team runs KustomMX graphics while the Husky guys are stickered by Rival Ink. Topline gripper seats ensure the hotshots don’t slide off while hauling arse through a Test.

RIDERS’ PREFERENCES
Surprisingly enough, the guys have their bikes set up similarly and it really doesn’t feel that different to sit on them. However, there are a few differences that I did find. Milner runs an ODI Podium handlebar with ODI soft-compound lock-on handgrips and his levers are way down compared to Chucky’s position.

I actually had to adjust them up to feel comfortable. They run the map switch, but Chucky has the LED blacked out with a Texta so that the light is not a distraction. Sanders has stuck with the stock ODI lock-on grips that Husky uses but they are mounted on a Renthal 672 handlebar. Both of the bikes are fitted with Vortex ignitions and I believe Chucky is quite fussy with his power delivery and plays around with his mapping all the time. Milner is more ‘set and forget.’ I also noticed that Milner likes to run MX3S tyres while Sanders had the MX33 fitted front and rear. 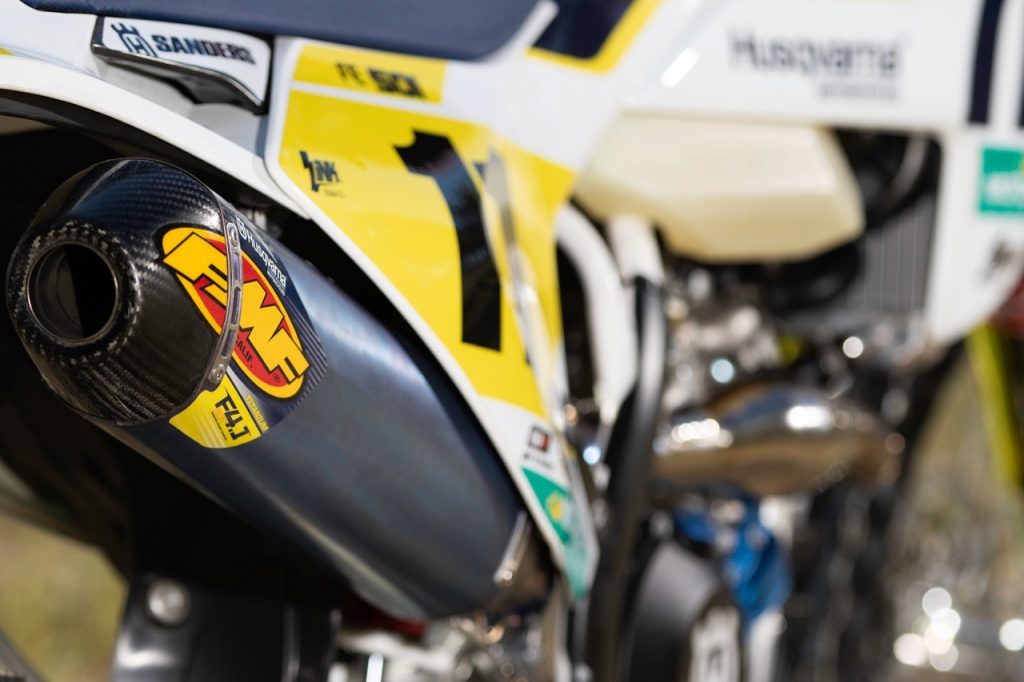 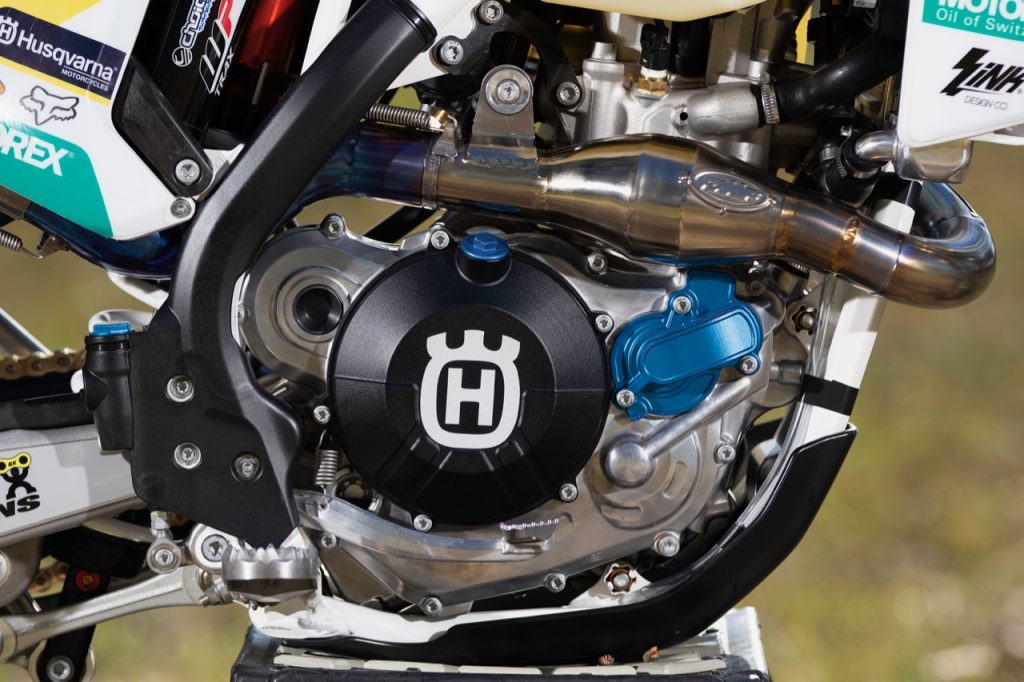 I hopped on the number 11 machine first and did a couple of laps. There is no denying that the thing is a grunt machine and, around my test loop, I think I stayed in third gear the entire time, maybe jumping up to fourth on the fast back straight. Chucky’s FE501 has so much torque that you rarely have to touch the clutch or worry if you are in the right gear.

It’s a little different when I switched over to Milner’s 350EXC-F, which he used in the first part of last season before switching to a 450. I had to be so much more on the ball with gearchanges and hitting my lines.

On the 501 I could be a little lazy and the power would pull me out of corners no problem. The 350 needs a little more precision in order to get out of the corners as fast. The biggest change when going from the 501 to the 350 was the super-agile feeling and stopping ability coming into corners. The smaller engine has way less inertia and it felt like I was riding a 125, throwing it around through the trees with ease. 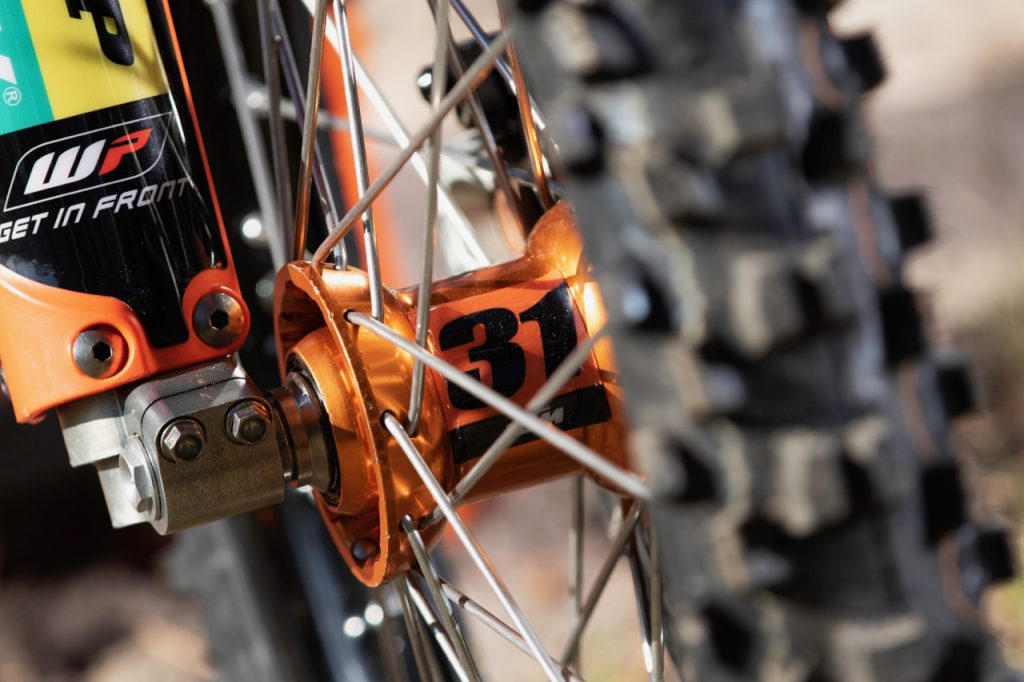 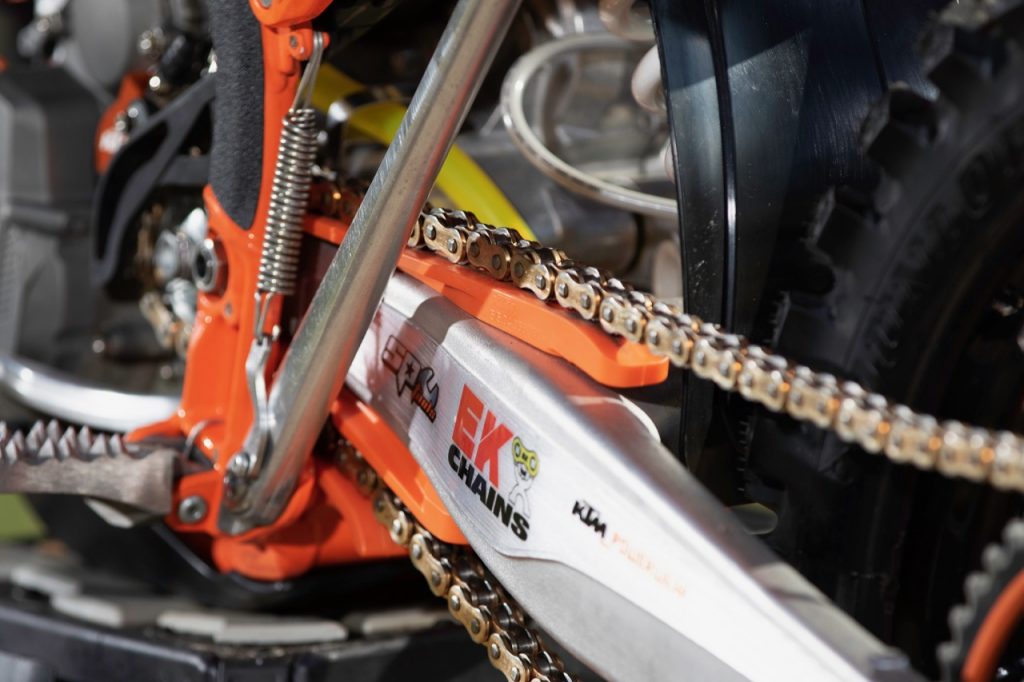 DIFFERENT, BUT SO SIMILAR
It’s crazy how different the engines are, yet it’s even more crazy that the riders were so close on almost every kind of terrain at the races. They matched each other’s times at almost every track regardless of the conditions.

I do feel that the KTM team would have had to really put a huge amount of time and effort into getting the most out of the 350s engine compared to the big 501, which is already such a strong package.

While Milner’s 350 EXC-F was stronger off the bottom then I was anticipating, I loved the grunt of the 501, especially on the grasstrack. The 501 is an animal out of turns and when that FMF is cracking, it feels like you’re moving through space when you wind it on. Of course, this is super fun, but as a result of the blistering fast motor, I found myself having to be a bit more careful coming into the turns on the Husky, whereas the 350 was the opposite.

I could hold the throttle a bit longer and because it was lighter, I would chop it at the last second, pull up, settle into the corner and be on my way out of there, winding the 350 EXC-F on as hard as I could. 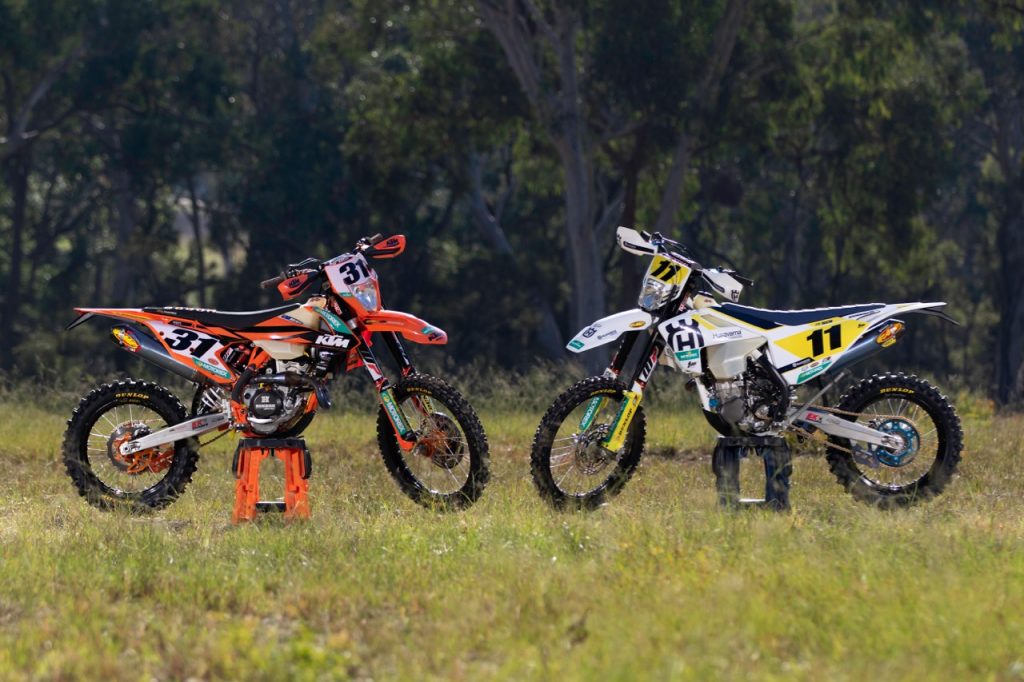 It has that strong bottom-end too, so it loves to be short shifted. Both of the bikes are fitted with top-of-the line WP 48mm Cone Valve forks and Trax shocks and it’s all tuned up by Anthony Giles at Choice Suspension.

Hours and hours of testing goes into these bikes before the season starts and I was eager to see how Milner and Chucky had their bikes set up. They run the same fork, but the KTM has the PDS Trax shock and the Husky has a Trax Link shock to suit its monoshock set-up.

Before even hopping on the bikes, I was told that the set-ups were quite a way different and that was something that I wanted to sample on the track. To be honest, I was quite amazed that, despite the difference in setup, they felt quite similar.

Milner is super picky with his fork and has it set up pretty firm while he likes a softer shock with fast rebound. On the other hand, Chucky runs a soft fork with a low, firm shock.

On paper, they should feel totally different but, honestly, I struggled to feel a radical variation between the two. I was comfortable right away on both bikes.

They both felt plush at the top of the stroke, both firmed up as travel progressed and, of course, they rarely bottomed out.

Despite the track being dry and skatey, both bikes were glued to the ground and I had a blast. I didn’t feel like Milner’s fork was too hard and I think it’s because I had to push so much harder into the corners than on the 501 so the firmer fork is what was needed. It may sound silly, but I felt the same comfort level on both bikes right away, even with the different chassis. I mentioned this to the mechanics and the guys at Choice, and they were just as surprised as I was.

ONE OF EACH
It’s no wonder that the Daniels are at the top of their game. The weapons that they choose to use in their assault on the enduro world are works of art that not only look good but feel good in the bush. They are surprisingly easy to ride, no matter what type of track you’re on, and inspire confidence in your ability and that’s what you need to push the limits through the trees and be the fastest enduro riders on the planet. I’m look forward to seeing these two battle it out again this year, if Chucky doesn’t score an overseas ride, and it’ll be interesting to see if anyone can dethrone them.

CHOICE BRO
Let me say first of all it was an absolute honour to work with the two best athletes of Australian/world off-road riding in 2019. Both boys take the testing of their bikes very seriously and they understand that the suspension is one of the most important pieces of the puzzle.

Between both Milner and Chucky, we do about the same amount of track test days, which works out to be 10 for each rider. There is a lot of in-house work done on the suspension before we go trackside with them, Choice Suspension is very committed and never stops learning and developing new settings, spending countless hours on our suspension dyno.

MILNER
Daniel can feel absolutely everything on the fork as he puts a hell of a lot of trust in the front-end, so a bit more emphasis goes into the fork of his bike. He really likes the fork to be fairly firm as he puts so much trust in the front-end. I also think the KTM chassis with the PDS seems to be more sensitive to changes in the front. With the rear he likes it to be on the softer side with fairly fast rebound.

SANDERS
Chucky is nearly the opposite to Milner in what he likes and is much more focused on getting the shock working spot on. He runs a very soft fork with a firm shock setting and likes the bike to be very low in the rear. I also think this is related to the Husky with the linkage swingarm.

All the work we all do really helps our customers whatever age or ability they are. We can generally hit the nail on the head first time with our clients because of how much we test and develop. Anthony Giles, Choice Suspension

WHAT TRACK FOR WHICH BIKE?

I’d run the 501 for grasstrack and desert races, for sure. That thing is a point-and-shoot master and I reckon it wouldn’t have much of a problem holeshotting every race. The 350 EXc-F is perfect for tighter tracks and the thing eats singletrack for breakfast. I think the 350 EXc-F would be pretty damn good on a moto track as well, because it’s super light yet has plenty of power and there isn’t a ton of Aussie MX tracks out there that are balls-to-the-wall fast with massive bumps.

Which was faster? The test venue had a mixture of tight sandy bush, a small moto track and a grasstrack. It was pretty fast and flowy for the most part. I felt good on both bikes and, just as during the AORC season, the times were only a second apart. I did a 4min 07sec on the FE501 and then busted out a 4min 06sec on the 350 EXC-F. I was definitely more relaxed on the 501 but it was a bit more of a handful in the tighter stuff compared to the 350 EXC-F.

Dirt Shark lurked back up to the murky waters of The Pacific Nothwest to capture all the action from the 2017 Seattle Supercross.

THERE IS A place I know where the jungle dirtbike trails are loam. The overhead canopy of vegetation keeps in moisture.