Kawasaki’s engineers figured they’d done such a good job with the KLX230R funbike that they’d build an ADR version for the trailriding masses.

When Kawasaki released the road-legal KLX230, there was a lot to look forward to. I had already tested the non-registered KLX230R and was excited to see how its ADR-compliant sibling would compare. Before getting too deep into this review, remember the Kawasaki KLX230 was built for on- and off-road fun. You can ride it down to the shops and take it out trailriding.

As is the case with the KLX230R, Kawasaki designed the engine and frame from scratch. The KLX230 frame is high tensile steel. The engine is identical to the non-ADR compliant version and produces great, linear power for a 230, as soon as you open the throttle. The SOHC, single-cylinder configuration is the ideal engine layout for durability and reliability. The gears are well spaced and are easy to change. The six-speed transmission has low-mid torque which makes it comfortable to get up hills with enough power from second gear. Riding behind cattle was easy with a low first gear proving that this bike can be a multi-use vehicle. 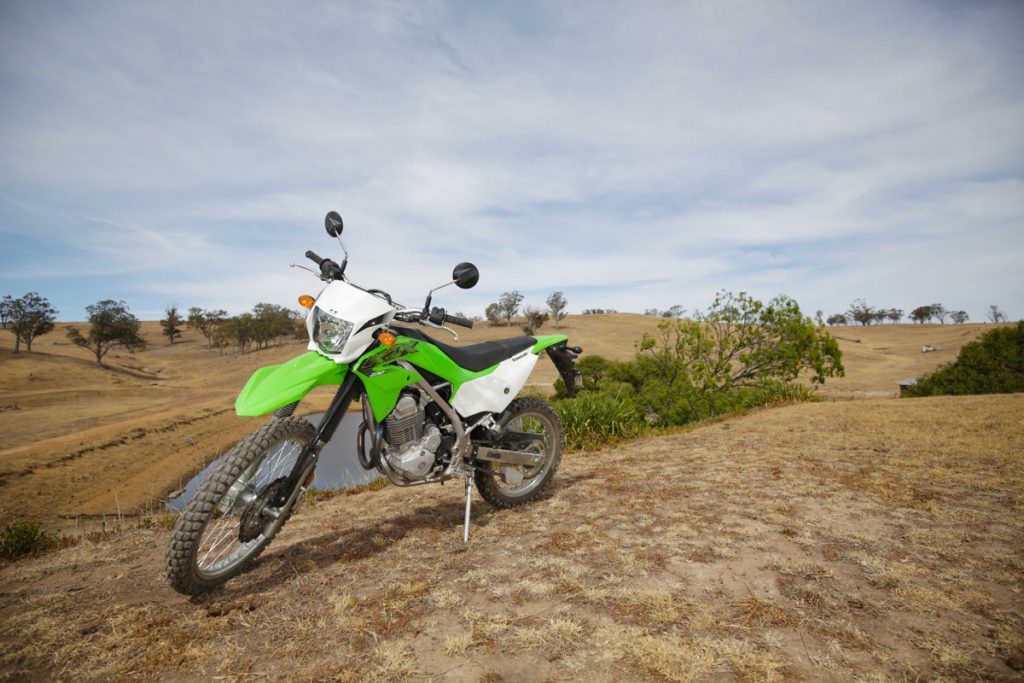 The gears ratios felt fine for off-road use and were well suited to trailriding. When riding on the road the bike felt just as comfortable smashing through the gears and it didn’t get that high-speed death wobble. The wet, multiplate clutch was easy to pull in and allowed smooth changes. The bike has electric start with an easy-to-read digital speedo but it is a little bulky. The bike has a key start and the fuel tank requires a key to open it for safety and security. This is annoying for quick refills but with tougher compliance laws more bikes will have this feature. The bike runs a bigger 7.5 litre tank than the KLX230R which isn’t a surprise given it’s rego’d. As a result you obviously get a few more kays.

The 885mm seat height is shorter than the KLX230R (925mm) but still a bit too tall for me as a beginner to comfortably ride. I am 170cm and I could just touch my toes on the ground. Especially when learning, its best to get something on which you can plant both feet on the ground. The wet weight of the bike, when it has a full tank of fuel and fluids, is 134kg. This is quite a heavy bike which can make it hard to perform some manoeuvres, like turning around or picking it up after a crash. After a few stacks I could pick it up, but it got exhausting.

It had a slightly longer wheelbase at 1380mm for better road riding and the ground clearance is 265mm which, while 35mm lower than the KLX230R, still made it easy to get over rocks and bumpy surfaces with plenty of room. The front wheel travel is 220mm and the rear is 223mm. This too is less than the KLX230R, proving Kawasaki really did design this bike for true dual purpose use. 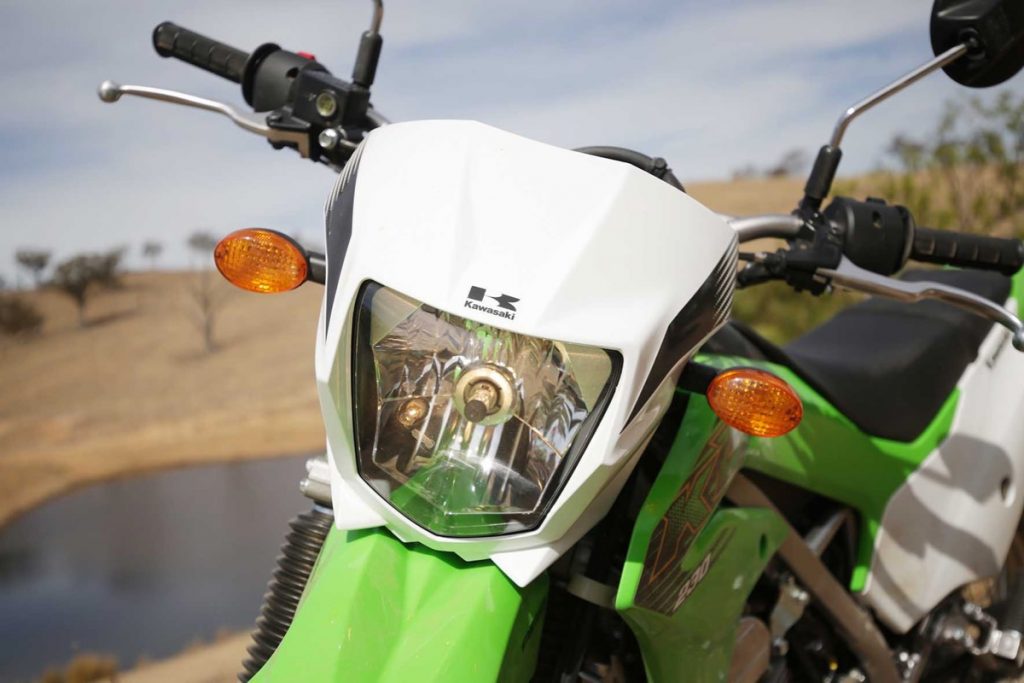 The suspension was smooth and it would simply glide over most rocks. To meet ADR requirements, the IRC Trails – GP tyres (yep, we never heard of them either) are at dual-purpose use end of the spectrum. The tyres were better than I thought they would be and seemed to grip well and help maintain balance. Sometimes road-legal tyres can slip easily when trailriding but that wasn’t the case with these ones.

They didn’t bite like a knobbie on dry, slippery trails but they didn’t frustrate me either.

The bike has Bosch ABS braking which is a feature that cannot be turned off. The front brake has a single 265mm disc with twin-piston caliper and the rear runs a 220mm disc, with a single-piston caliper. Jess and I had a good test of the brakes and we both felt they were great on the road, with the bike coming to a stop without skidding but the ABS system was a bit scary in the bush. On the dirt the bike would skid as the brakes would go off and on again which would upset the balance of the bike and actually take it longer to stop. It made us hesitant to use the brake when trail riding. I understand ABS is a great feature on wet bitumen roads but it is not ideal for off-road use and was dangerous at times, particularly for beginners. 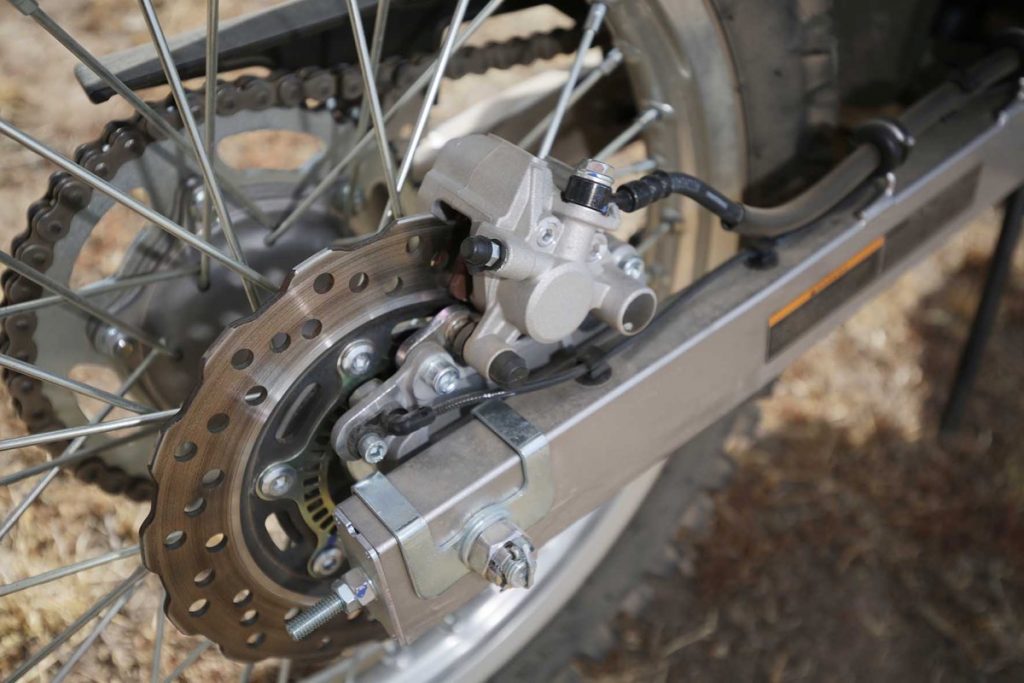 The KLX230 comes in the standard Kawasaki lime green colour. As the bike needs to meet road requirements, the bike has lots of added extras which probably makes it a bit top heavy.

The mirrors are very flexible and easy to move, you just have to remember to adjust them after a stack. The blinkers are easy to turn on and off and are flexible so if the bike falls, they won’t break instantly. All of these features were well engineered into the bike.

The headlight looked a bit big and bulky but it sat nicely at the front without getting in the way of a full-lock turn. The digital instrument panel was big and easy to read, it was good to know what speeds I was going, usually I just take a guess.

The stand was in a good location and easy to find without looking down. The bike runs a sidestand cut-out switch which doesn’t allow you to start the engine when the stand is down and if you put the stand down when the engine is on it cuts the power. This is probably a good thing for absolute beginners but can get annoying when you know what you’re doing. 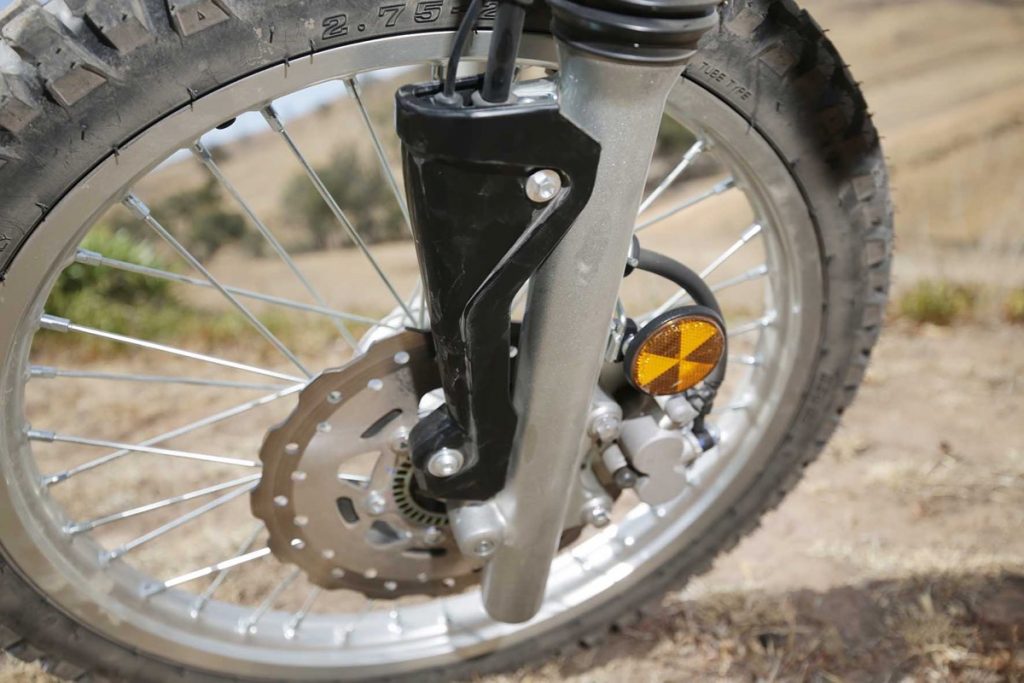 The Kawasaki KLX230 dual-purpose road/trailie has lots of safety and up-to-date features. The bike looks sophisticated and all the on-road essentials are nicely engineered into the bike. You will have to fork out about $7078 to ride the bike out of the dealership, depending on where you live, with 24-months warranty and unlimited kilometres. This is slightly more expensive than the KLX230R.

So for about $900 more you get a registered bike with similar features. Not only can you whizz around off-road but you can also take this bike down the highway for an afternoon cruise or a relaxing road adventure. Adding these registerable features to the bike still makes it suitable for trailrides, just be wary of that ABS.

Second opinion
I always like to get someone else’s thoughts on the bikes I test for ADB so Jess was my riding pal for the day, and she said the bike was pretty comfortable and had a good standing position. The seat had a medium softness and both the clutch and front brake were easy to pull in. 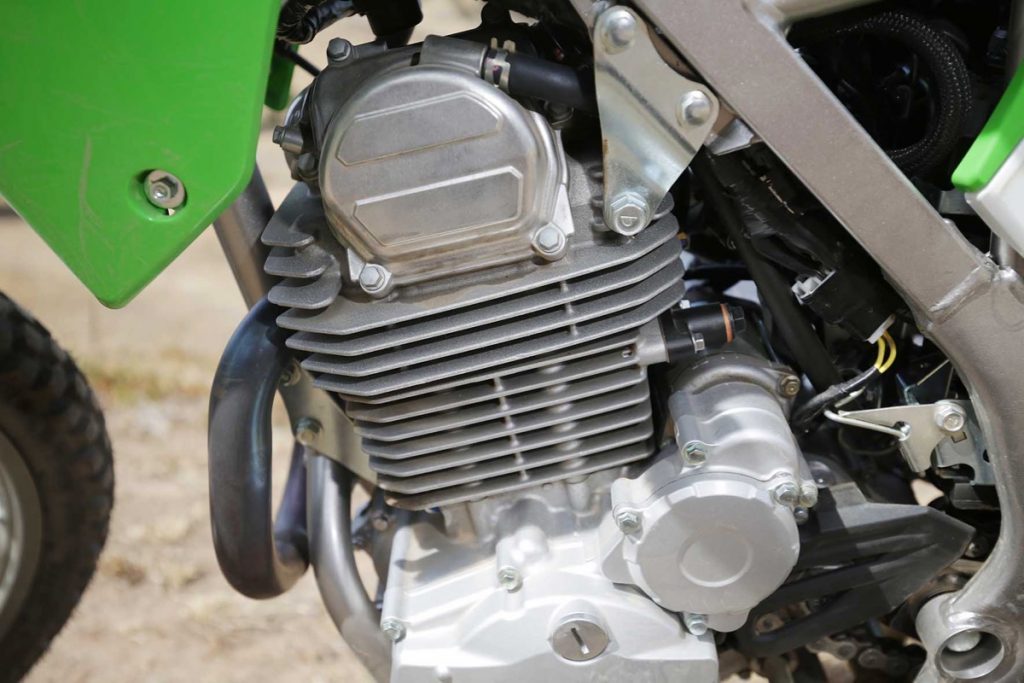 Jess is 163cm tall and had to lean over to one side to have one foot on the ground to help with balancing when stopping. This can be difficult for a beginner who isn’t comfortable stopping and starting and can lead to some easy stacks. The weight of the bike also makes stopping difficult as its heavy to balance on one foot. Jess reported the suspension was smooth and the bike went over rocks and bumps easily. The footpegs are in a good location and are grippy. The steering felt good and the bike had a good turning circle, better than what she thought just looking at it. Again the ABS braking on the dirt and gravel was scary at times and occasionally led to a long, on/off skidding stop. It is unfortunate that this can’t be turned off as it impacted on the way this bike was ridden.

Compare the pair
Surprisingly, the registered and unregistered Kawasaki KLX230 bikes felt quite different when riding them, even though they are very similar on paper. Both bikes have a similar look, they have the same engine, type of suspension and clutch. They are both electric start and fuel injected. But the bikes vary in dimensions and the ADR gear doesn’t go unnoticed.

As expected, you will pay more to have a dual-purpose, on and off-road bike. The Kawasaki KLX230 is approximately $6920 ride away with a 24-month warranty and the KLX230R is $6040 with a six-month one.