Are you new to riding and unsure of what bike to get? The Kawasaki KLX230R is a newbie too.

Kawasaki has always had a large range of bikes, but it has recently ventured into the 230cc trail segment for new riders wanting to venture off-road with the road-legal Kawasaki KLX230 and stripped-down Kawasaki KLX230R. This is a sector that has been dominated by Honda and Yamaha so it is good to see another player.

When looking at the Federal Chamber of Automotive Industries’ sales figures for the first three quarters of 2019, the trail category has declined significantly, with Honda’s CRF230F dropping 30% and the Yamaha TTR230/A down 27 compared with the same period in 2018, but the new Honda CRF250F which we reviewed in June (ADB #477) went from zero in 2018 (it wasn’t sold until 2019) to 575 units.

The segment represented over 1600 sales for Honda in those nine months and Kawasaki wants a bigger chunk of that pie. It hasn’t just bumped out the capacity of the KLX150 or squeezed the 250S but has designed a new bike that can compete on features and price at $5699.

After a weekend riding around on the Kawasaki KLX230R chased by a team of photographers I was surprised with the amount of power it puts out. Having a SOHC, two-valve engine with 9.4:1 compression, the bike is forgiving on the throttle and should prove reliable. 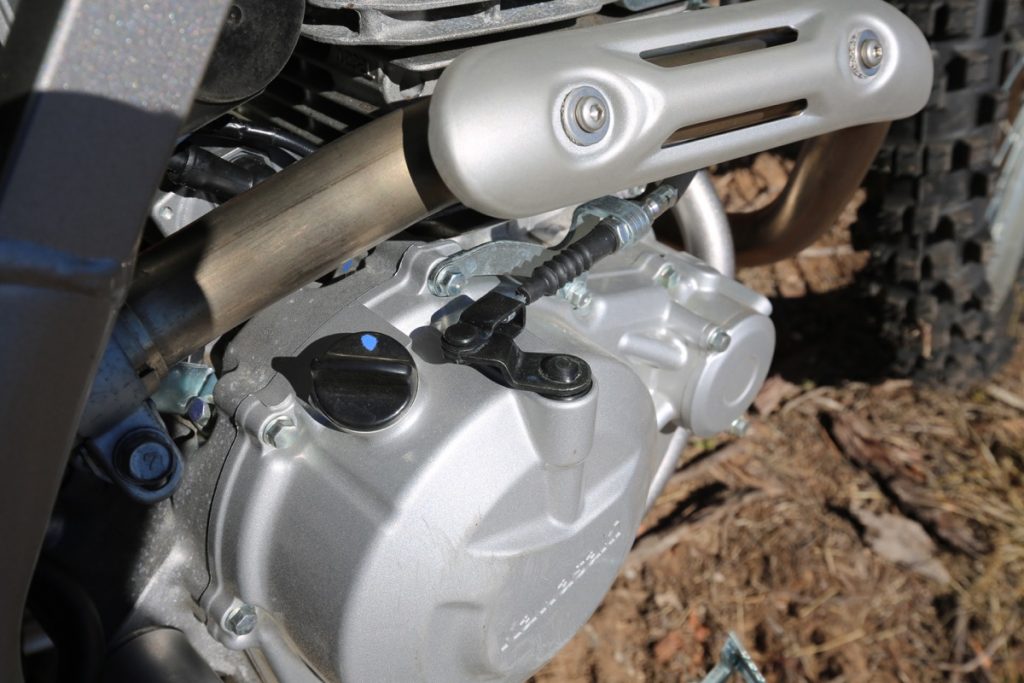 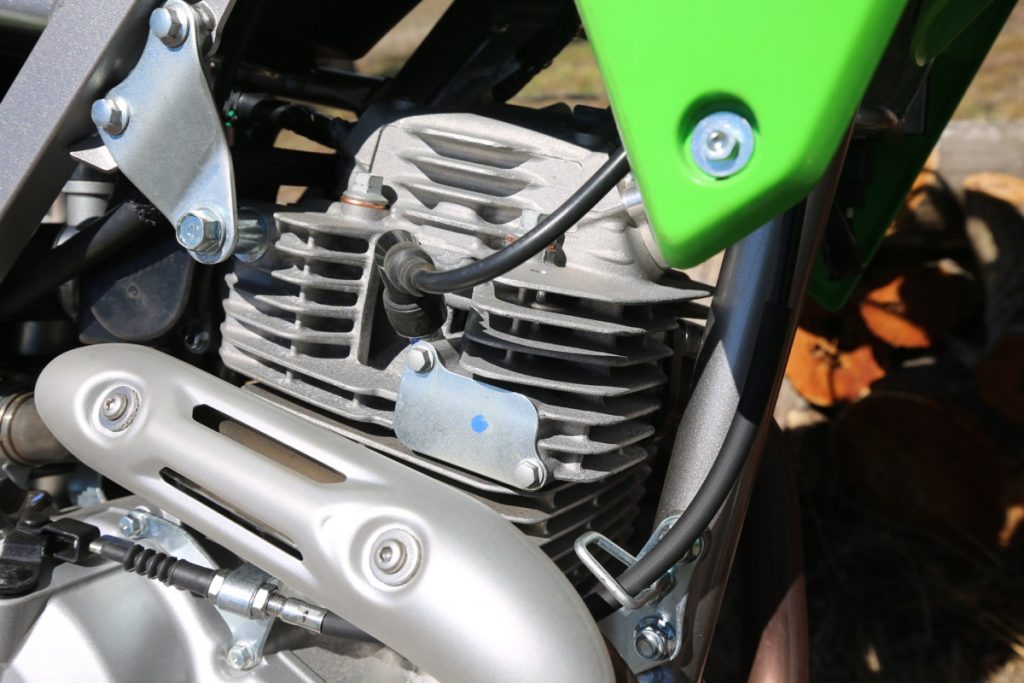 SEAT HEIGHT
The six-speed machine was a blast to burn around the paddocks on. It has electric start, which is great for someone who loses their keys every day. The seat was taller than the one on the Honda CRF250F I tested back in June. It might only be 42mm but even with my riding boots on I could only touch the floor with my toes and I am 170cm tall. The seat height wasn’t noticeable when I was riding but when I came to a stop it made it hard to balance, as I usually had to pick a side to lean on. I knew I couldn’t use both feet as I could hardly touch the ground. This led to some wobbly stops. I did start to get better at this towards the end, it just took some adjusting to.

The suspension felt smooth, the smaller bumps got absorbed well which made for a comfy ride. This meant that when riding in rocky areas the bike was easy to control and balance. Sometimes when I was riding over some larger rocks, I hesitated but I was pleasantly surprised by the soft landing.

The front runs a 37mm conventional fork with no adjustment and the rear is a monoshock with adjustable preload. The bike has a ground clearance of 300mm which was perfect for the rocky terrain I was riding on because there was little chance of hitting the undercarriage with wheel travel around 250mm. 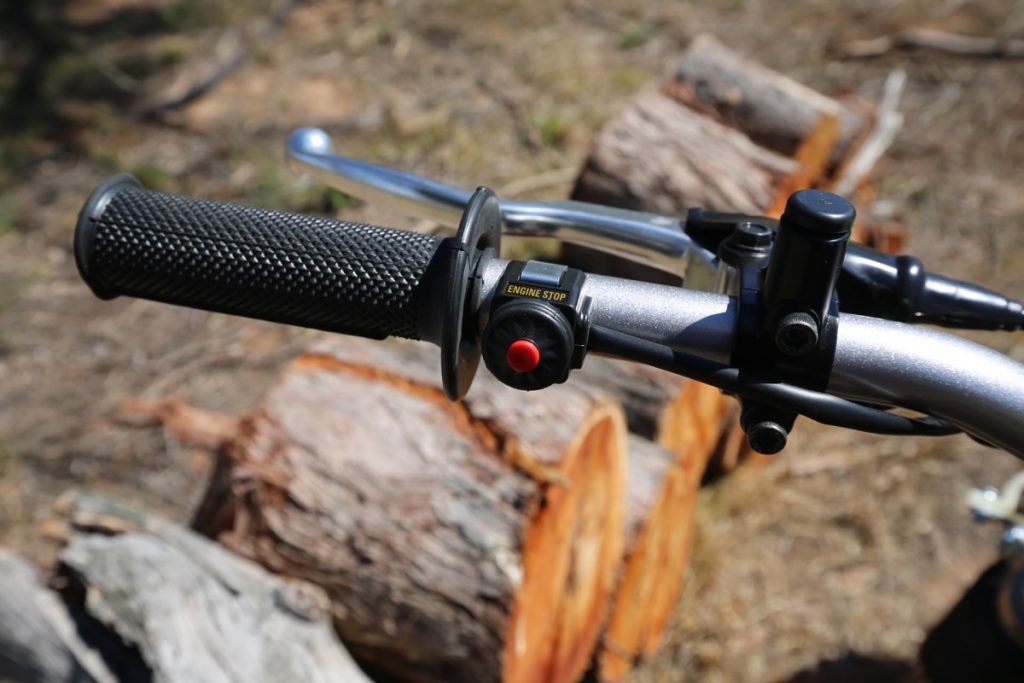 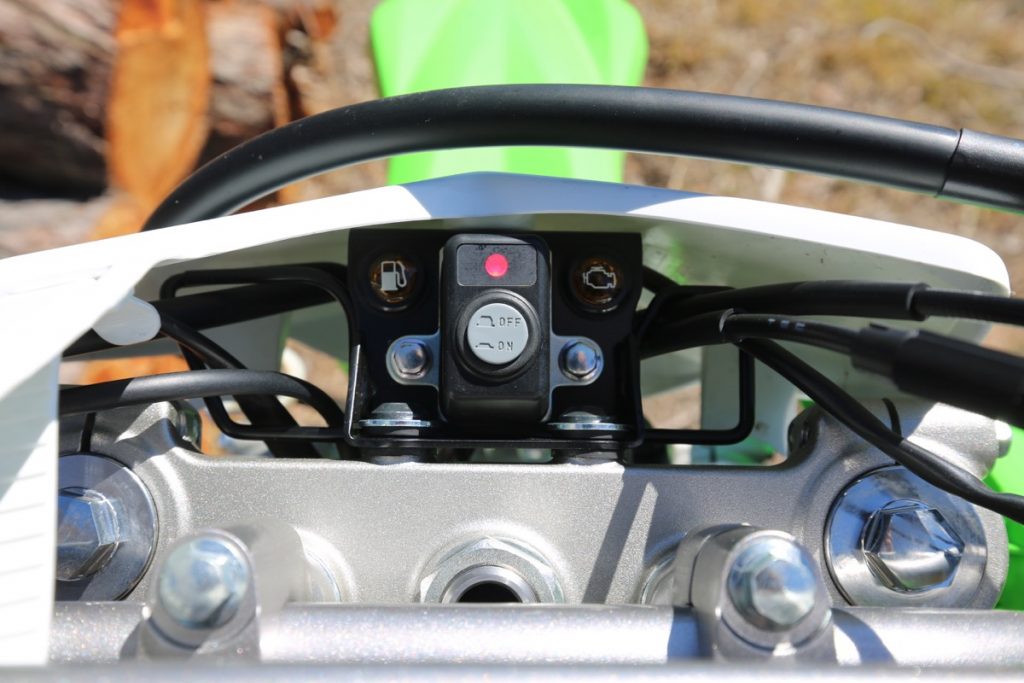 The steering is light and I was able to turn around in small spaces with the 1360mm wheelbase. For someone with smaller hands, I found the levers easy to reach and not too hard to pull in. The front brake was very responsive and easy to manage. As I was coming down rocky hills, the bike was easy to slow down, it didn’t jolt or throw me off balance, it just came to a nice, smooth stop. This is great for beginners as it didn’t affect my balance on the bike.

The rear brake wasn’t too sensitive and loss of traction was not an issue. The pedal seemed slightly high but this could be easily fixed by adjusting the pedal. I often had to look back to find the sidestand instead of feeling it with my foot. The position of the footpegs is perfect for my height and the seat padding was fine.

The frame is made of high-tensile steel, which is strong but does lead to a wet weight is 115kg. It did feel heavy when I came to a stop as I had to balance the bike on one side. After a few stacks, picking the bike up became a bit of a challenge.

As you’d expect, the electronic fuel-injection was very responsive so I didn’t have to wait for the power to kick in but the gears are fairly closely spaced and I had to change gears a lot as it didn’t like the steeper hills in higher gears. There doesn’t seem to be bucket loads of torque, so climbing steep terrain is best done at high revs. The sixth gear will be more useful on the KLX230 road version. The cable clutch was consistent, it was easy to pull in and didn’t fade despite getting a bit of a hammering. 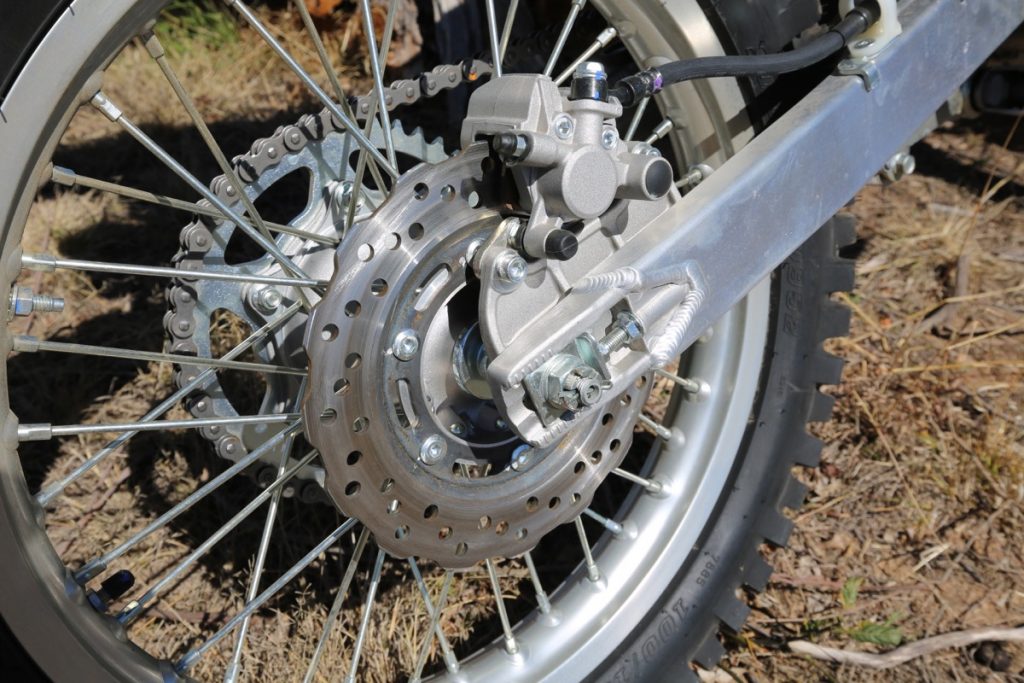 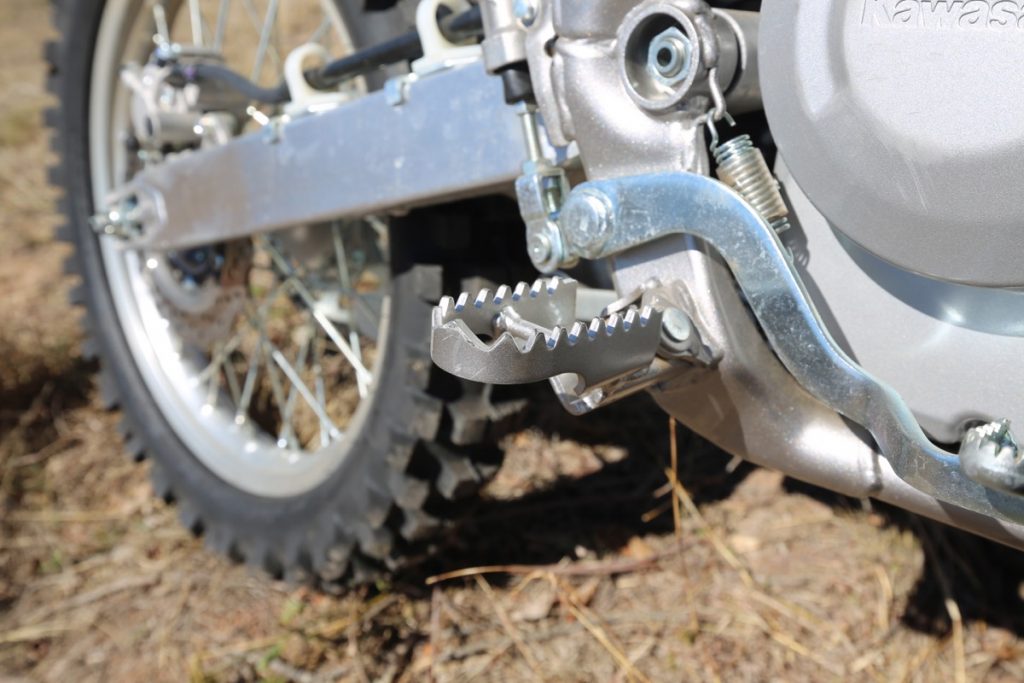 COMFORT
The tank might be stylish but, at 6.6 litres, it’s capacity is a bit of an issue compared to the TTR230 (8L) and CRF230F (7L) but every bike has its pros and cons. After a weekend of riding the green machine, I wasn’t ready to give it back. I had a blast. It felt a fraction tall for me, so I had difficulty balancing when coming to a stop. This is something I am not used to, but I started to get the hang of it towards the end.

The comfort was impressive, the seat was well padded and the plush suspension was great over all the rocks in the paddocks and dry river beds.

I found that I was often changing gears with first, second and third far apart and although the gear changes were smooth, as a beginner, I often found myself losing track of which gear I was in. For someone with more experience they would find the extra gear more useful than I did.

The bike had a lot of power off the mark, with great acceleration, but mid-range torque was a bit off so I had to change down for hills. Not only does this bike look great, but it is also fitted with great features including the high-tensile steel frame, air-cooled motor, fuel injection and cable clutch. Due to the relatively short wheelbase, the bike is easy to manoeuvre and has great handling. The KLX230R is a fun off-road bike for beginners and intermediate trail riders. 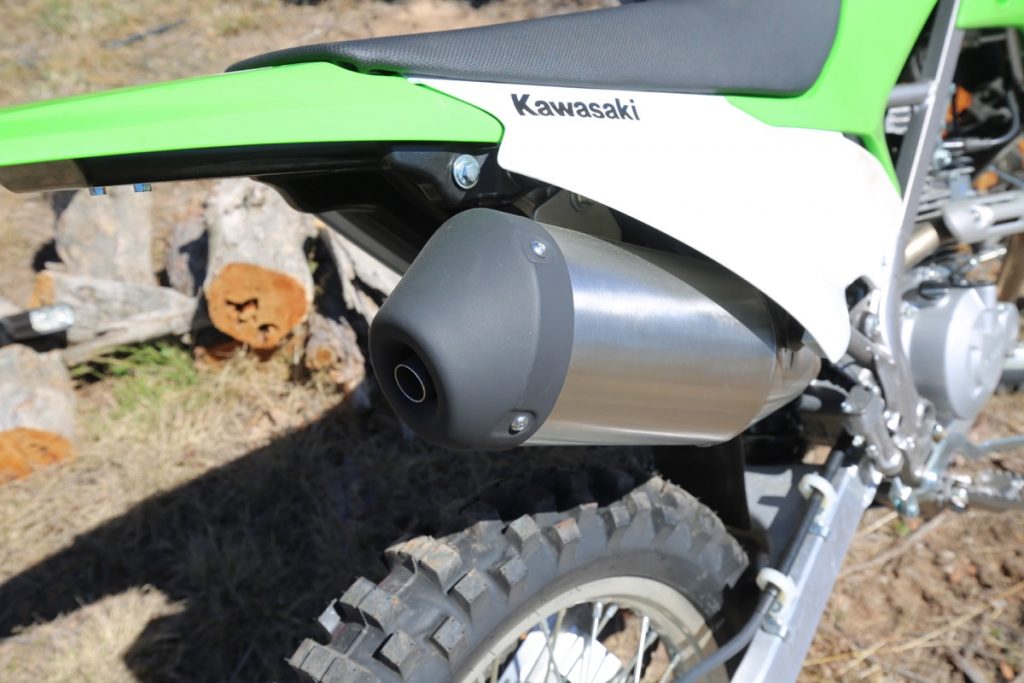 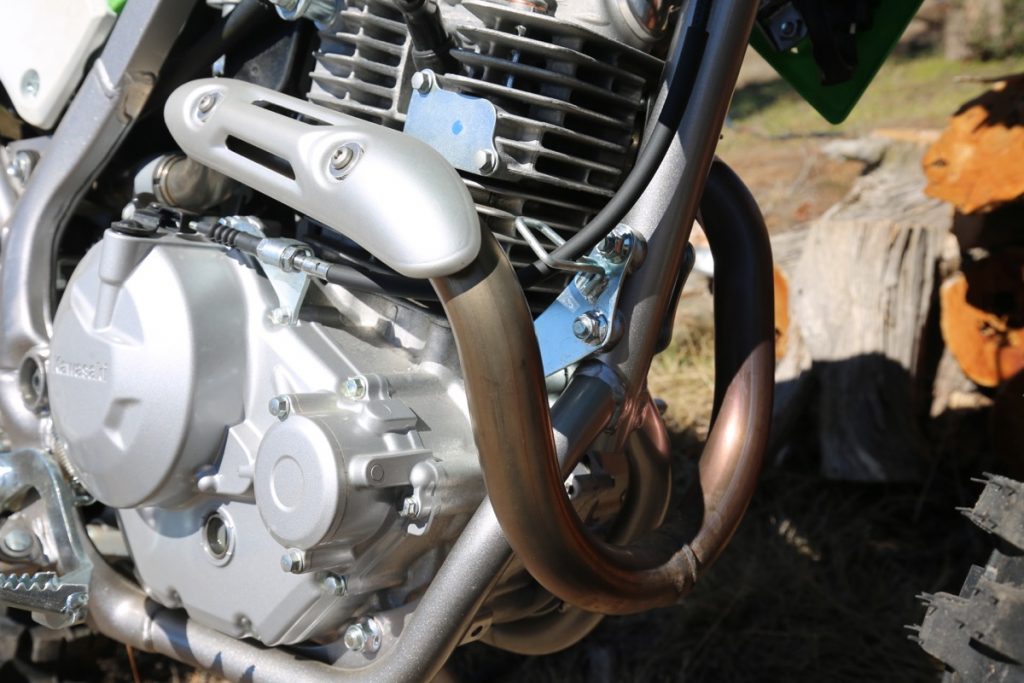 So why the Kawasaki KLX230R?
The weight of 115kg wet and 925mm seat height is great for people who aren’t comfortable riding a 250cc bike or larger. Because the bike doesn’t have a full-sized frame, the bike is a lot easier to manoeuvre.
• The six-speed transmission means there is a gear for all occasions whether it is a long straight or up a hill.
• The 250mm travel suspension allows the bike to absorb a lot of bumps on a trailride without making it too tall.
• The engine is air-cooled so it won’t boil the billy, great for folks on the land.
• With a wheelbase of 1360mm, the bike is manoeuvrable and has light steering.
• It’s great value at $5699.

Although I tested the KLX230R off-roader, Kawasaki also has a road-legal version with dual-purpose ABS that we will be testing shortly. With plush suspension and a lower seat, this $5999 (plus on-roads) bike should make for a relaxing commuter. The road-legal version has a digital speedometer and tachometer, which won’t detract greatly from the bike’s ability on the trail, while the headlight lets you hit the dirt later in the day.

Did ADB's Dylan Ruddy photograph your young child at the 2017 Australian Junior Motocross Championships? Check out the full event wrap in ADB issue #459.