Suzuki’s DR family includes some of the best-selling dirtbikes in Australia, with the DR650 the most popular machine in the adventure category last year and the DR-Z400 near the top of in trail.

But the range doesn’t start at the 400, with the Suzuki DR200S and DR-Z250 also among our most popular road-legal trailbikes, according to official figures.

The Federal Chamber of Automotive Industries says dealers sold 101 examples of the Suzuki DR200S last year, but that’s just 20 per cent of the 650’s sales and 16 per cent of what the 400 sold. So why doesn’t the DR200S pull in as many punters?

There must be some ego involved because, for a beginner like me, this bike would have to be the most comfortable of the road-legal machines I have tried and is a great all-rounder. The DR-200S is definitely an under-estimated bike for learners.

I think people make the assumption that it’s an underpowered ag bike but I was pleasantly surprised by its overall ability.

This model has great visual appeal; it’s not the usual Suzuki yellow but has a sleek grey finish like the 650. The ADR gear has been discretely incorporated into the design rather than hanging out in the breeze. I was pumped to take the Suzuki DR200S for a spin to see how it would go. 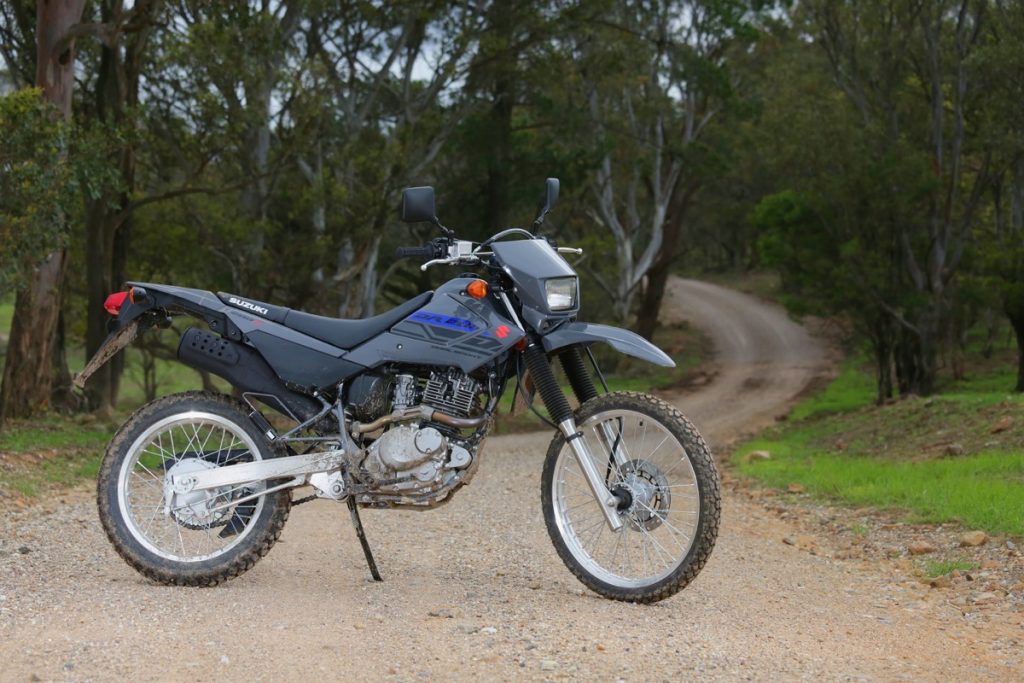 With a seat height of only 845mm, I could firmly plant both feet on the ground, which is great for a beginner. The bike was easy to get going on the button (there’s no kickstarter) and the 199cc, SOHC engine was smooth off the mark. It didn’t feel as powerful as the TT-R230 but the carby fed, air-cooled mill still gave enough punch.

The engine is the same as the one in the DR200SE Trojan, so it knows its way around. Being straight out of the box, some of the components were a bit tight. There was a false neutral in the five-speed transmission when going down through the gears but, after a while, this stopped happening.

The multi-plate clutch was smooth and easy to disengage. I went a maximum of 80kmh on the road and probably could have gone a bit faster, but I didn’t feel comfortable pushing it. The circular, old-skool speedo was easy to read.

I noticed a big difference between the gears, which made it good for riding on the road but a bit difficult on the trail. It has a high first gear and there is a big jump to second. This isn’t a big deal as you can change the final-drive gearing by going up a few teeth on the rear sprocket or down one on the countershaft sprocket. It felt stable on the road and would be a great bike to whizz down to the shops on or to blitz traffic on the way to work.

I tested the DR-S on multiple terrains; dirt, tar and gravel. The suspension was smooth and consistent. I had just come back from a non-bike-related broken arm and was a bit hesitant, but the soft suspension made for a comfortable ride, although it couldn’t stop me from having a few stacks. It had been a while since we had seen rain at the farm and, when I saw a big puddle, I couldn’t help but ride through it. The back wheel slid out, probably because I accelerated too hard on the stock rubber and I ended up dropping it, slow motion, in the mud. The bike is 126kg wet and I felt all of that weight when trying to pick it up. 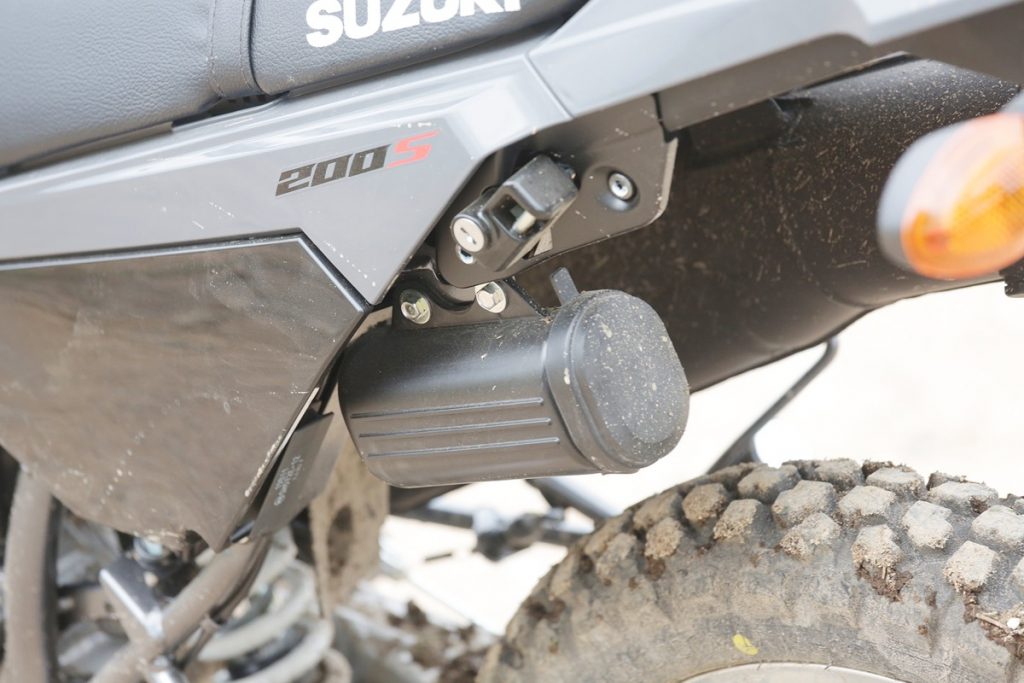 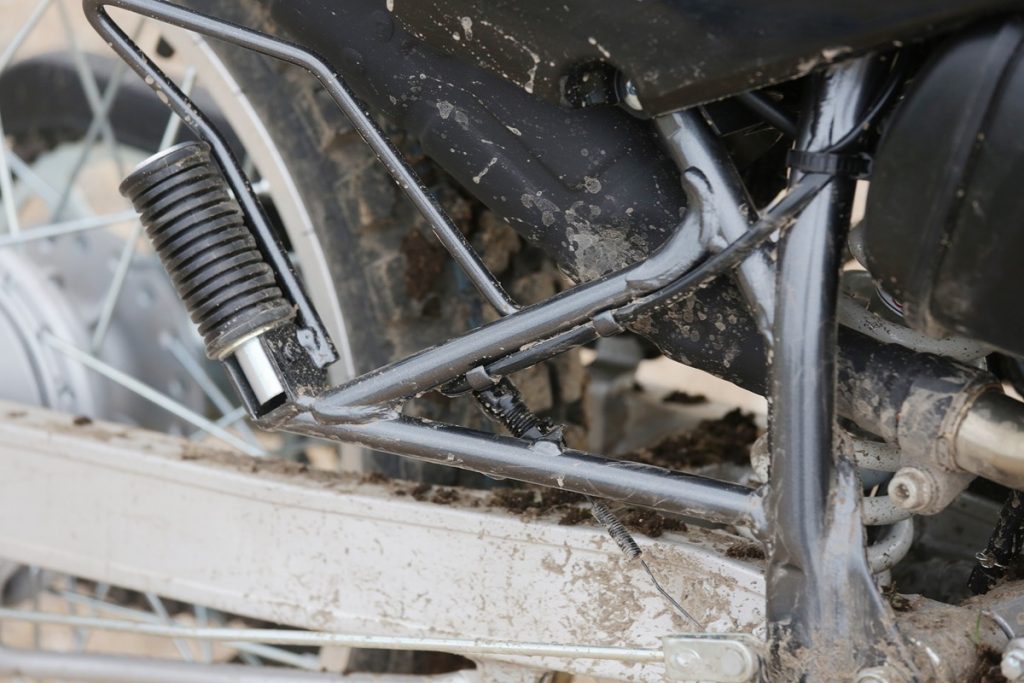 I was hesitant on the Bridgestone tyres, but was pleasantly surprised by their all-round capability. On gravel, the back tyre slid out a little bit. If you were going to ride predominantly trail or farm then you would probably change the rubber to a more aggressive knobby such as the Pirelli Scorpion Mid-Soft or Dunlop MX52 but if you are commuting, then leave the tyres on. It doesn’t come with handguards so if you were riding in the bush I would probably add those.

Thinking I was a better rider than I am, I went on a trailride with my husband and followed him down a gully. Due to the drought and then the floods, there was a big rut at a river crossing. Alex seemed to go over this section with ease, so I followed. Instead of trying to hop over the rut I went into the hole and the bike stopped. I kept going, straight over the hangers.

Alex turned around too late to tell me not to go over that section. At least I gave him something to laugh about and I came away with minimal injuries. With a bruised ego I picked up the bike and headed to the back of the mob. The mirrors were easily re-adjusted and I was good to go again. 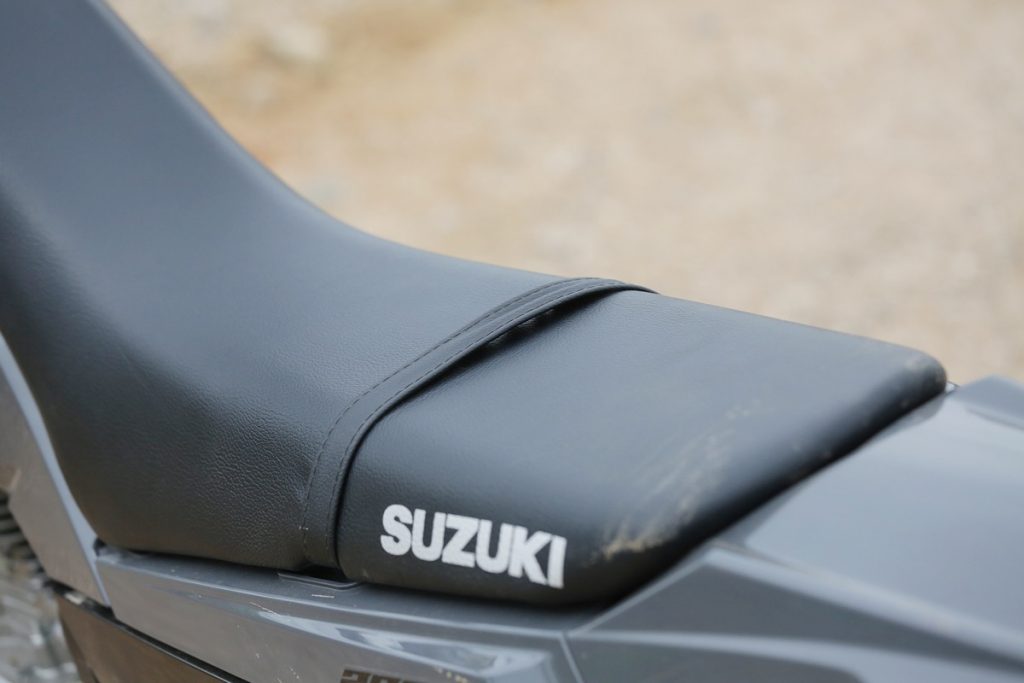 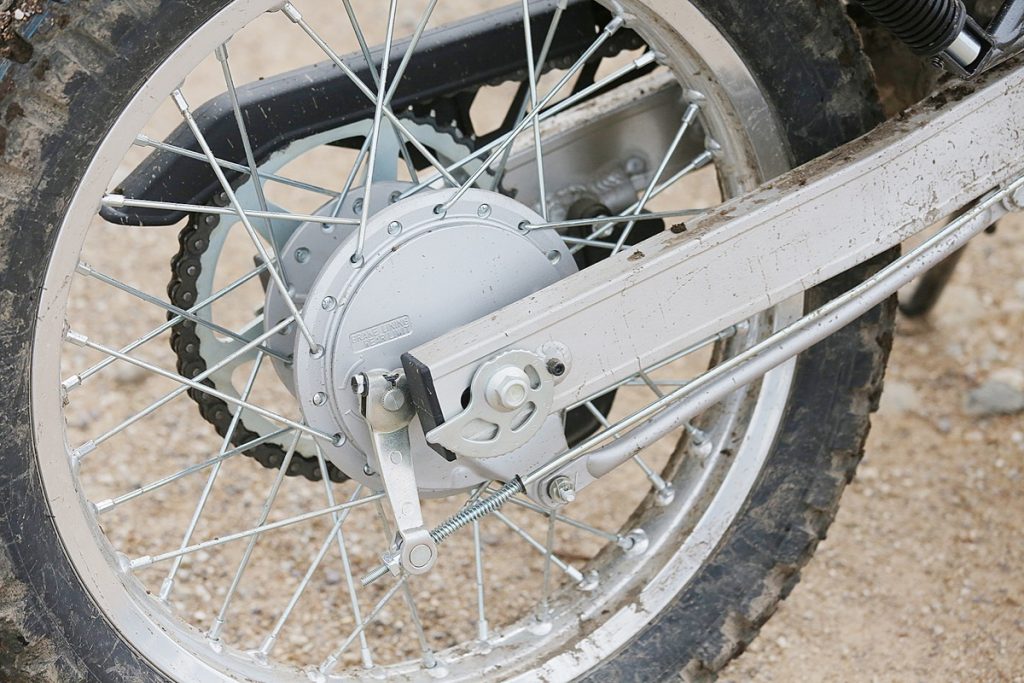 Despite having ADR gear, the DR is compact and doesn’t feel as bulky as the KLX230. The length is 2155mm, the width is 805mm and the height is 1140mm. The bike has a good turning circle and great steering. It felt like it had a low centre of gravity as it was well balanced.

You might find the pillion ’peg gets in the way when operating the sidestand but you’ll get used to it. When it comes to stopping the show, the front disc and rear drum brake did the job. The drum isn’t as strong as some other bikes, such as the CRF250 that has a disc rear but we put the brakes to the test in all sorts of conditions and they were fine.

While the Suzuki DR200S isn’t the latest technological marvel, it’s reliable nature is a positive for a beginner wanting to have a bit of fun on the trail but also get to work and beat the traffic. If you are looking for something a bit bigger and with more power, it wouldn’t be a bad idea to check out the DR-Z250. 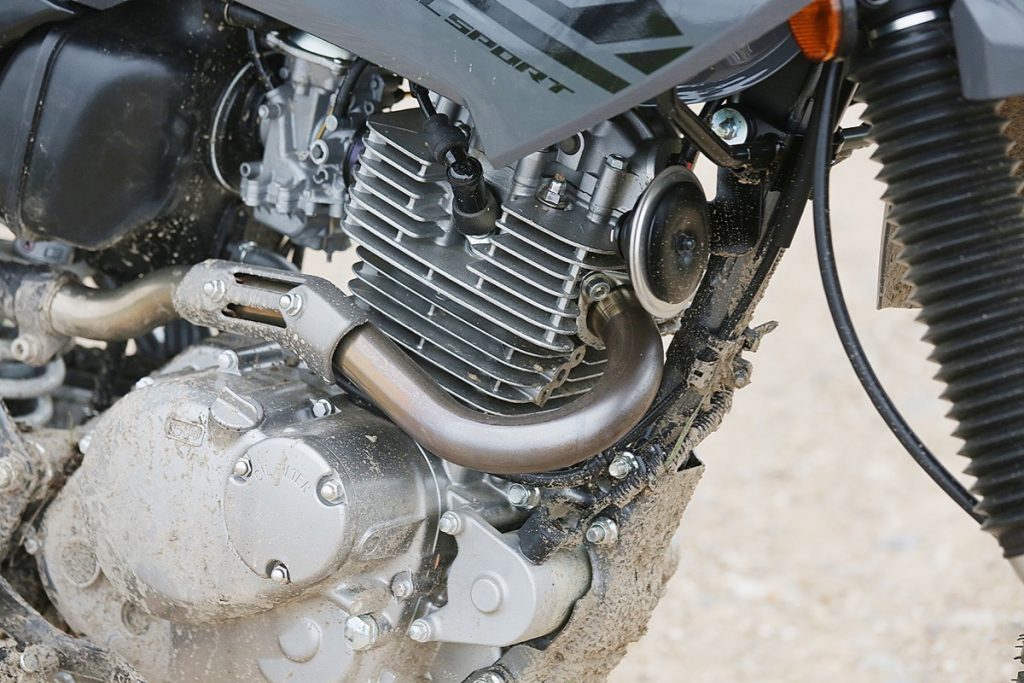 The 200 can also double as an ag bike to muster cattle and get around. It’s a bit lighter than the Trojan but that has all the farm clobber and is not road-legal. The low maintenance, air-cooled engine and the minimal ADR gear make the DR-S a great all-rounder and perfect for people moving from something like a 125. For only $5990 with 12 months warranty you will be investing in a reliable, yet capable machine.

It has less-invasive ADR gear and most states require rego to ride in state forests. Also if you have an accident you have no cover, so this is really important.
• You can ride on the bitumen so if you need to grab a couple of things, or head into work, it’s perfect.
• It has a toolbox under the left sideplate to store a few spanners.
• It has an electric start which is great for trailriding as you are constantly stopping and starting.
• It is air-cooled, which enhances it reliability and reduces maintenance.
• The bike comes with pretty good all-round tyres.
• It’s well balanced, comfortable and has a low seat. 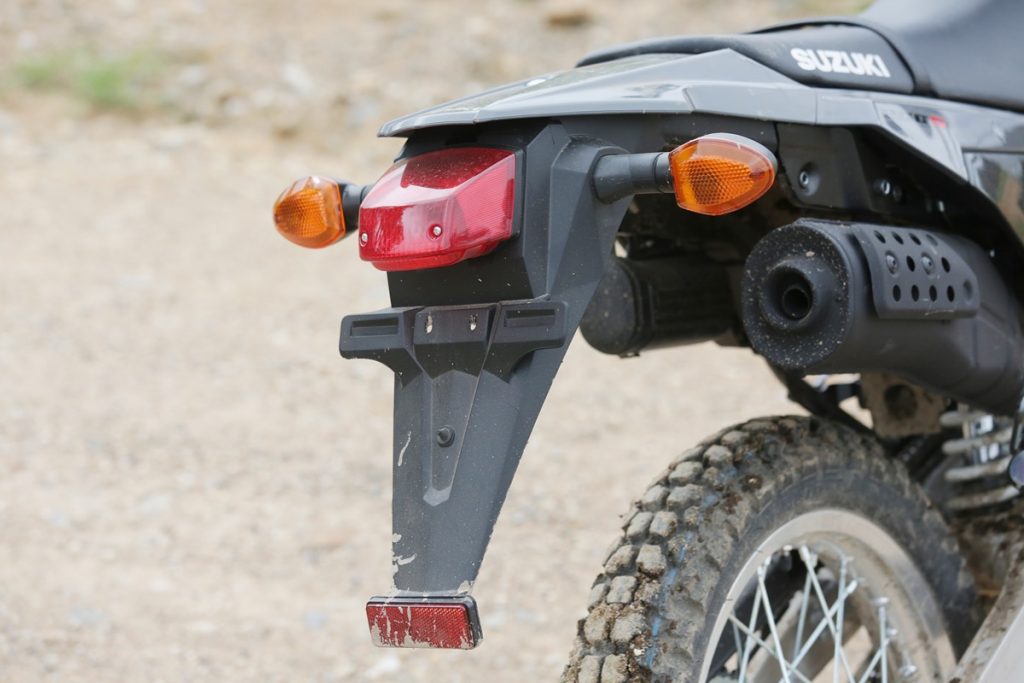 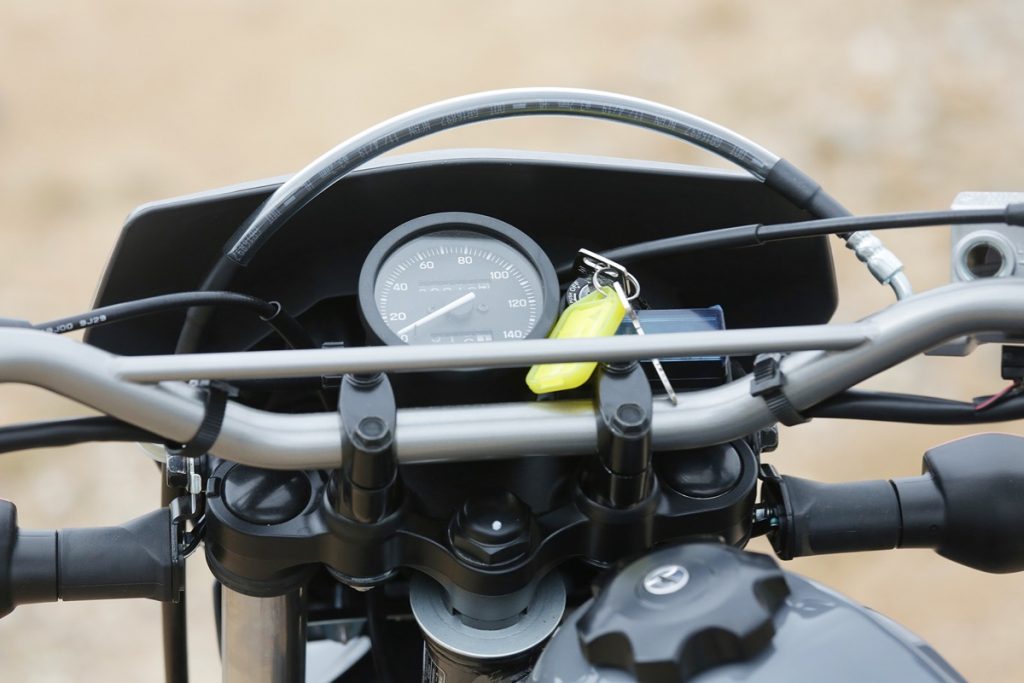 The Suzuki DR200S has been around for years and continues to have ADR compliance. It is less cluttered than newer registered models such as the KLX230 as the compliance requirements have got stricter.
• If Suzuki upgrades the DR-S it will be deemed to be a new model and the distributor will have to go through ADR approval again. This will mean fitting ABS and fuel injection, meaning more weight.
• We don’t want Suzuki to redesign it, as it’s a basic, light and reliable bike which is great for beginners.