It’s no secret that the WR450F is basically a YZ with lights and an electric starter, but does that make it a better bike in the bush or does the YZ450F handle the off-road better?

When comparing the Yamaha WR450F vs YZ450F there are a lot of subtle differences. The YZ has been designed purely for motocross. The frame is designed to flex over jumps and bumps for a smoother ride and the KYB closed-cartridge fork and shock have been designed specifically for motocross riding.

Now the WR-F has the same the chassis and suspension but the settings have been changed to be more suited to the bush. It has been fitted with an electric starter, lights and ADR gear as well as a quieter muffler.

On tight trails, the WR instantly feels like a big bike. The power and the heavy steering make it a real handful. An experienced rider will have no trouble manhandling it around trees and over logs but not without some sort of fatigue. The addition of the headlight and Barkbusters add weight to the front and make the steering feel much heavier.

The power curve also makes the bike a handful on tight trails and demand a lot of clutch and throttle control. While the clutch isn’t the heaviest going around, it certainly isn’t the easiest and tight trails cause the clutch to heat up, resulting in the rider having to adjust the free play.

In the tighter, slower trails, the softer WR suspension works well but starts to edge on the side of being too soft when the trails become rough or fast.

The YZ is lighter and easier to throw around in among the trees but certainly isn’t the nimblest bike out there either. Open fire trails or desert riding is where these bikes really start to excel. They are both fast and super stable lines at high speed. They both stay well planted and have no deflection issues at speed.

The YZ suspension is more suited to faster riding but the WR has exactly the same units, just a softer set up.

The WR motor is exactly the same as the one in the YZ with the same piston, cam and cam timing but has a wide-ratio gearbox. The radiators have been changed to enable a thermo fan to be fitted and improve cooling. 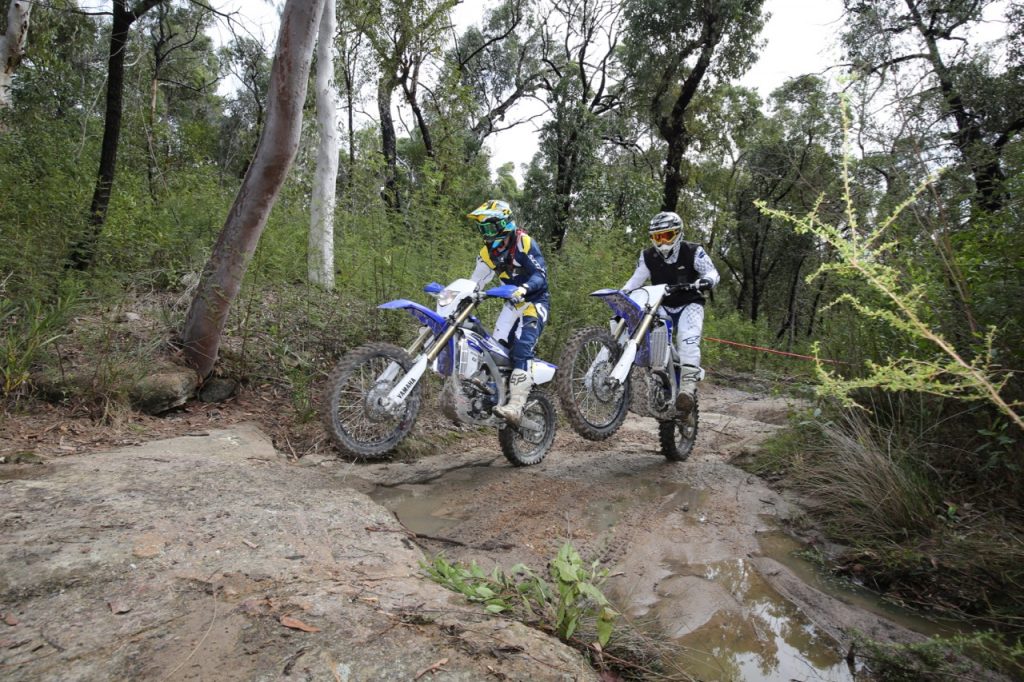 WR450F vs YZ450F TECH
The WR450F is essentially the same as the YZ meaning there will be many parts on the market for both bikes.

The YZ clutch has been revised for the WR to make it more durable while a different actuator and larger diameter cable make it lighter at the lever.

The YZ only has the kicker but it does have the cold-start lever. The WR engine mounts are thinner to allow more controlled flex in the chassis.

The tank on both only hold 7.5 litres of fuel although the WR has a fuel light that comes on when there is about three litres left.

Both bikes have fully adjustable compression and rebound damping with the shock also having high-speed compression damping adjustment and a spring preload ring.

If you happen to be one of the lucky ones that lives in a state with rec reg here is what I would base my choice on. How big are you? How well do you ride and where will you be riding the bike?

The YZ suspension is stiffer and more suited to bigger, faster riders where-as the WR suspension is softer and can be a little too soft for bigger rider. If you are a beginner and tend to lie down or stop a few times during the day then the electric start is going to be your friend.

Kicking a bike all day gets boring real quick. If you are riding tight singletrack then the YZ will do this better but if you want to commute on a public road to get to the bush then obviously this is not legal on the YZ even with rec reg.

If you want to go blasting through the desert or along fast ire trails then choice either, they both do this with ease. But one thing is for sure Yamaha reliability comes in both forms the YZ and WR.