Other than the obvious cosmetic changes, like the black DID rims and tapered handlebar, the 2019 Honda CRF450R looks deceptively similar to its predecessor.

THIS FEATURE WAS FIRST PUBLISHED IN ADB ISSUE #472

To the naked eye, the latest Honda CRF450R looks basically identical to the 2018 model. Other than the obvious cosmetic changes, like the black DID rims and tapered handlebar, the bike looks deceptively similar to its predecessor.

But the 2019 has had some dramatic tweaks that have resulted in a huge horsepower and torque gain. To complement the engine changes, the red team has upgraded the front brake caliper for more stopping power, manipulated the frame for more straight-line stability, completely changed the swingarm while making it lighter and threw on a lighter set of footpegs among many other changes (see breakout on next page).

The upgrades saw the CRF450R give a much-improved performance in our 2019 450 Motocross Shootout in the last issue but a comparison like that doesn’t really give us the opportunity to examine bikes in detail. We wanted to know what the most important changes were and whether the new Honda would have too much power for the average punter. 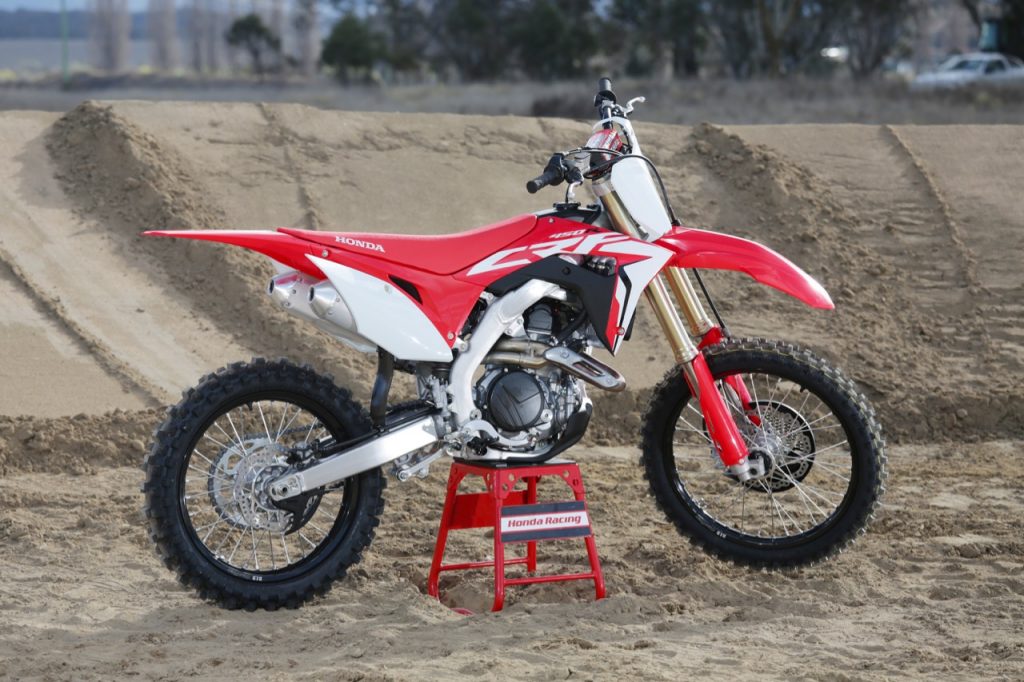 1. ENGINE
The biggest change for me is the engine. When you first ride the new Honda you immediately notice the motor and its characteristics. Not only has the CRF450R had an increase in overall horsepower but a change in how it is delivered.

The 2018 had an impressive mid-range and top-end but if you were a pro-level rider or slightly heavier than average you had to go to town on the motor if you wanted to liven up the bottom-end. You also had to swing off the clutch to get it to boogie out of corners.

The 2019 in stock trim comes on super strong off the bottom and allows you to pull a taller gear everywhere. So not only is it up close to three horsepower over the ’18, it also comes on smoother. 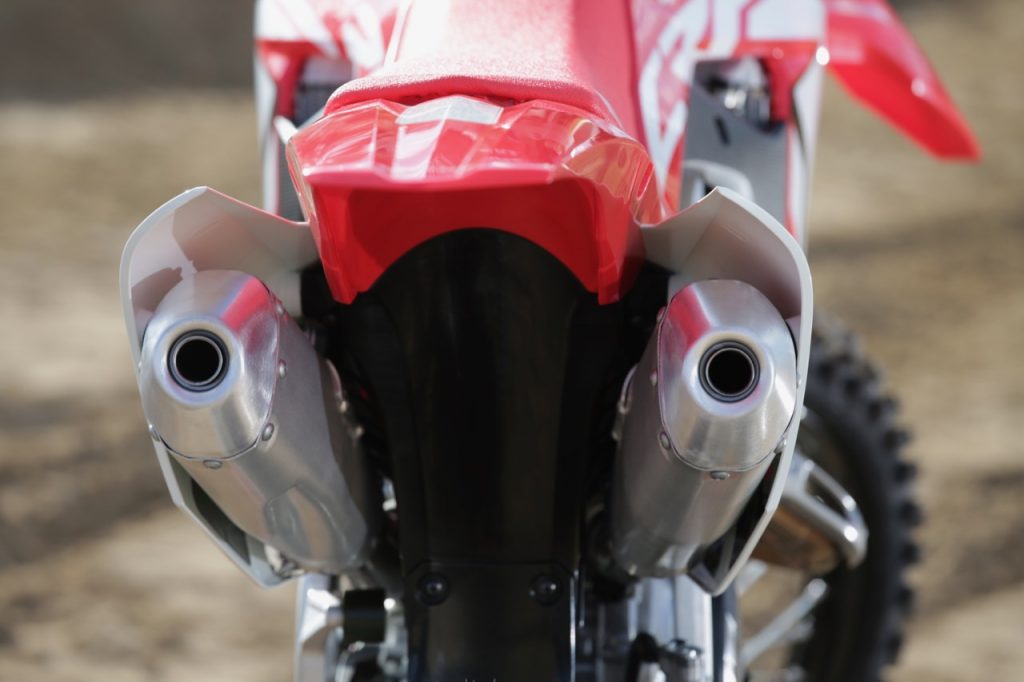 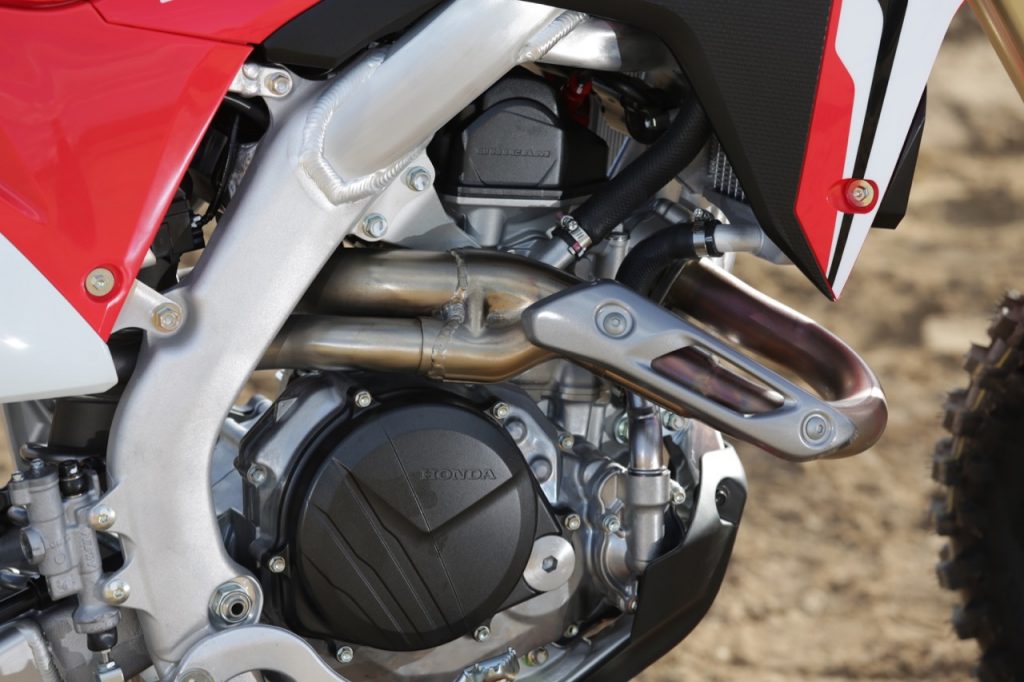 The standard mufflers we get are still on the small side and don’t have the loudest bark in the paddock but, for the first time that I can remember, they don’t seem to massively restrict the output. The bottom-end, mid-range and top-end power are all superior to the 2018.

However, it is mainly the bottom-end that grabs your attention when you first ride the bike. The Honda comes standard with three ignition maps that can be changed on the fly via the kill switch.

The settings are a smooth map (for slippery, hardpack surfaces), an intermediate (standard) and an aggressive (grippy surfaces). For the last two years I have always preferred the Honda’s power delivery with the aggressive map but for the 2019, I really liked the standard map the best with all that extra power on tap. 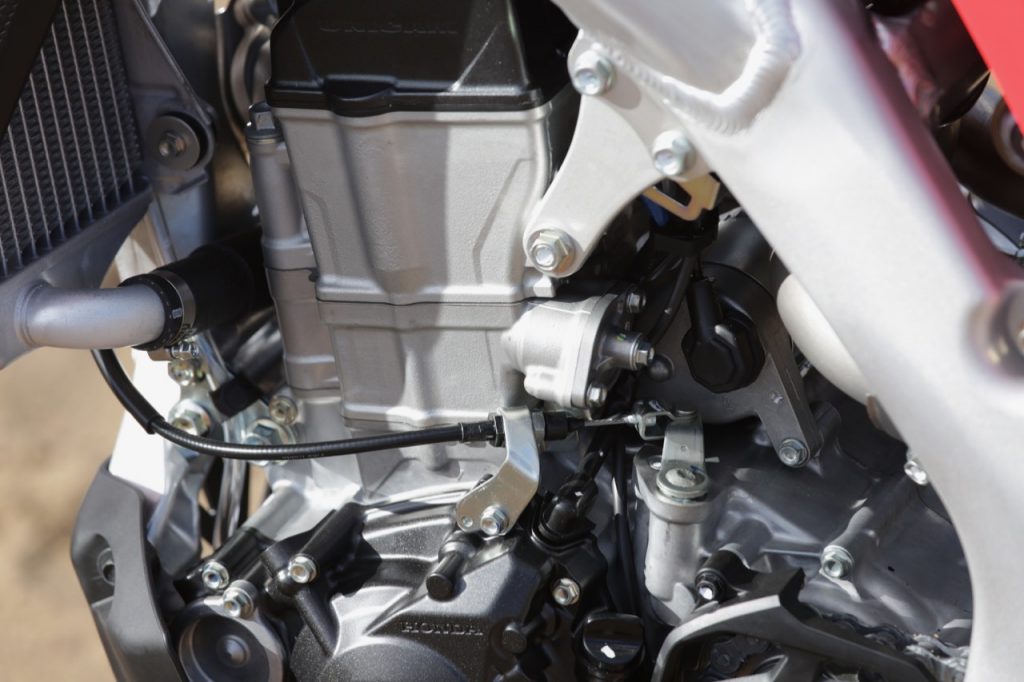 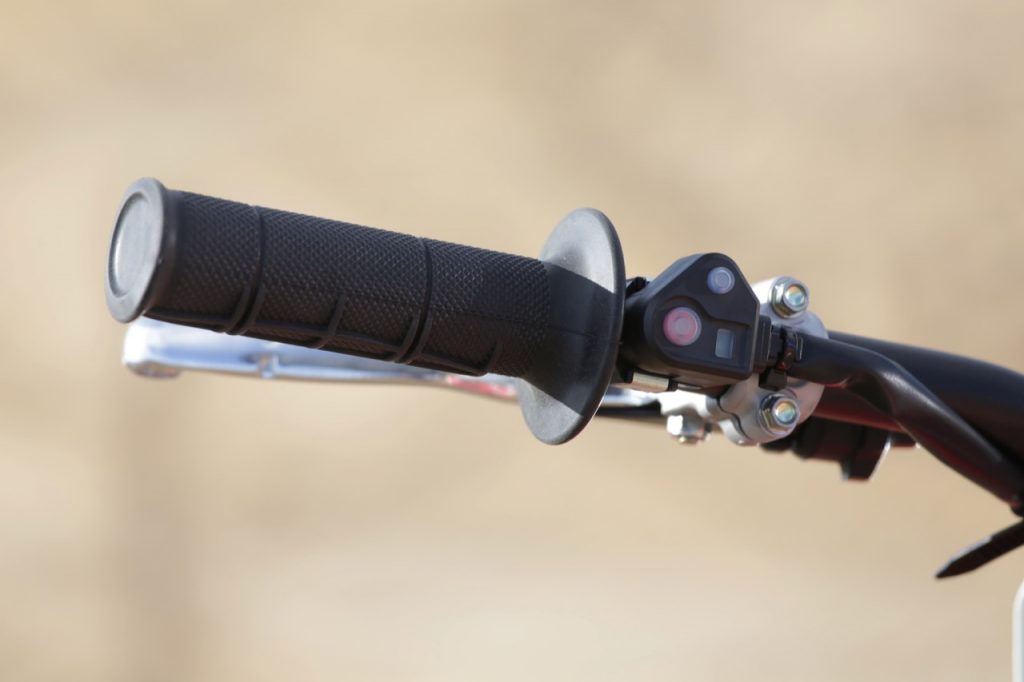 2. FRONT BRAKE CALIPER
With great power comes great responsibility and, in the case of the 2019 CRF450R, great stopping power. This was possibly the number one thing commented on by the test riders at our 450 shootout. The lighter front caliper grabs your attention when you first look at the bike.

But it is the internal changes that have made the most difference. The pistons in the new Nissin unit are different, with one being 30mm and the other 27mm. Last year’s model had matching 27mm pistons.

The extra braking power is huge and I’d go as far as to say that the new brake could rival KTM and Husqvarna’s Brembo brakes when it comes to stopping power. The brake also has a more solid feel at the lever, fortunately limiting that spongy feeling of previous years.

A lot of expert-to-pro level riders on Hondas resort to 280mm rotors to increase stopping power, so it would not surprise me to see a lot of 270mm rotors on the 2019. A 280mm disc might be just a tad too much stopping power with the new caliper. 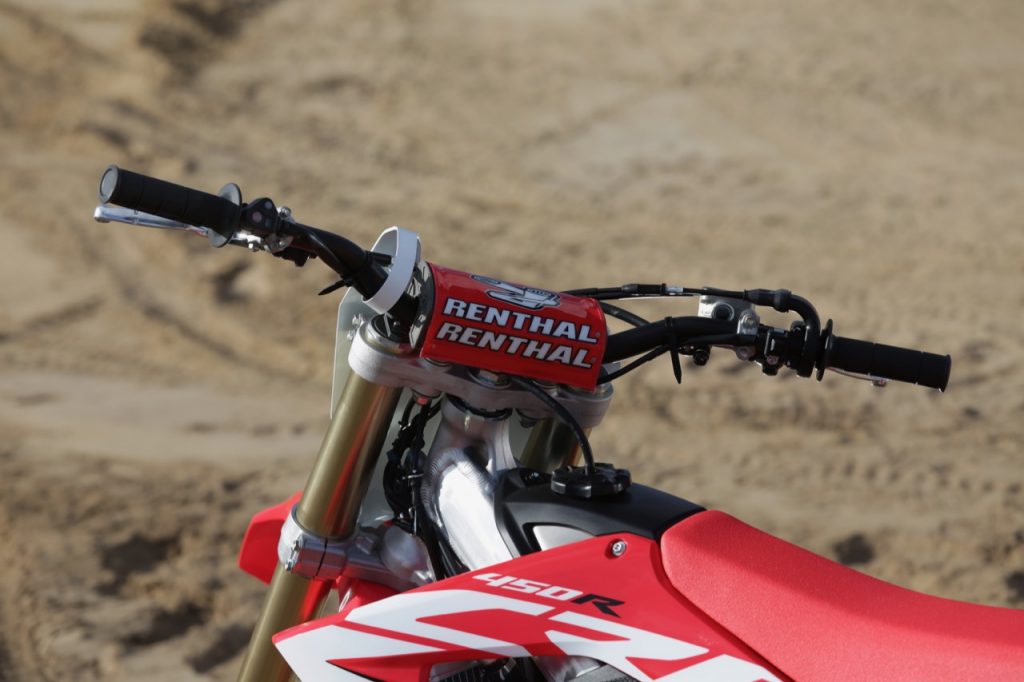 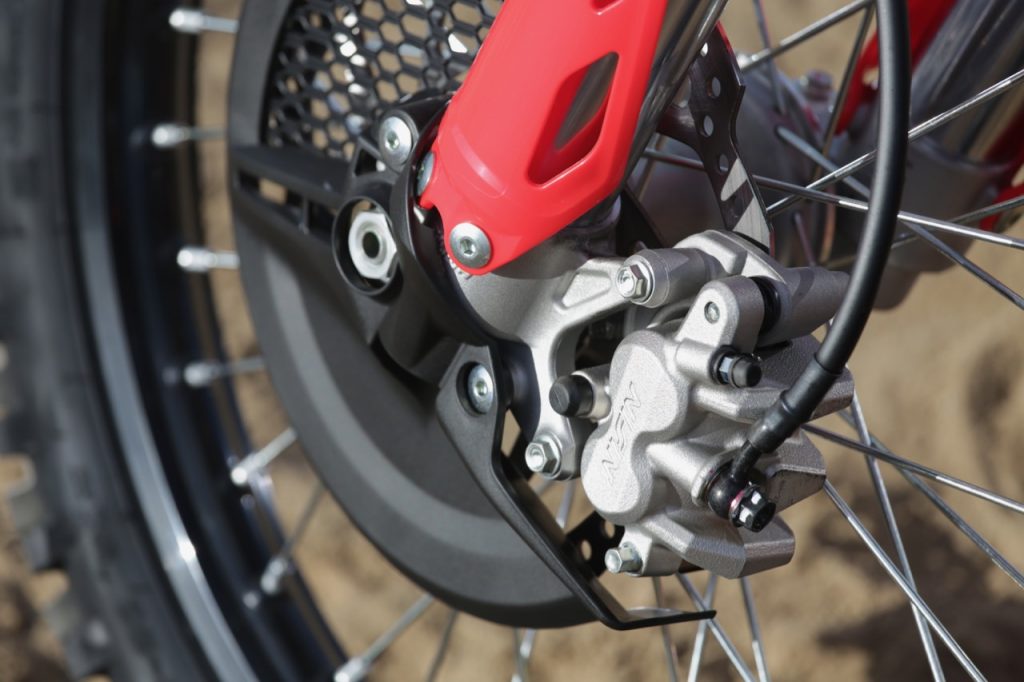 3. LOOKS
Some may say that it is long overdue but Honda has finally come up with two small additions that make a world of difference to how the new Honda looks. The first and most noticeable change is black rims. Not only has Honda been running non-anodised rims forever, but they seemed to be made of butter. Not only are the new rims black, but they are a much stronger rim from DID that will cop a pounding out there on the track.

Another sore point in recent years has been the non-tapered handlebars, so the new Renthal Fatbar has put a smile on a lot of faces. The bend is 3mm lower which seems to put you in a more aggressive position and helps with cornering.

And finally in the looks department, Honda has changed its fork protectors. It may not sound like much but once you check them out next to the old ones you’ll think the 2018 fork guards were something out of the 1990s. 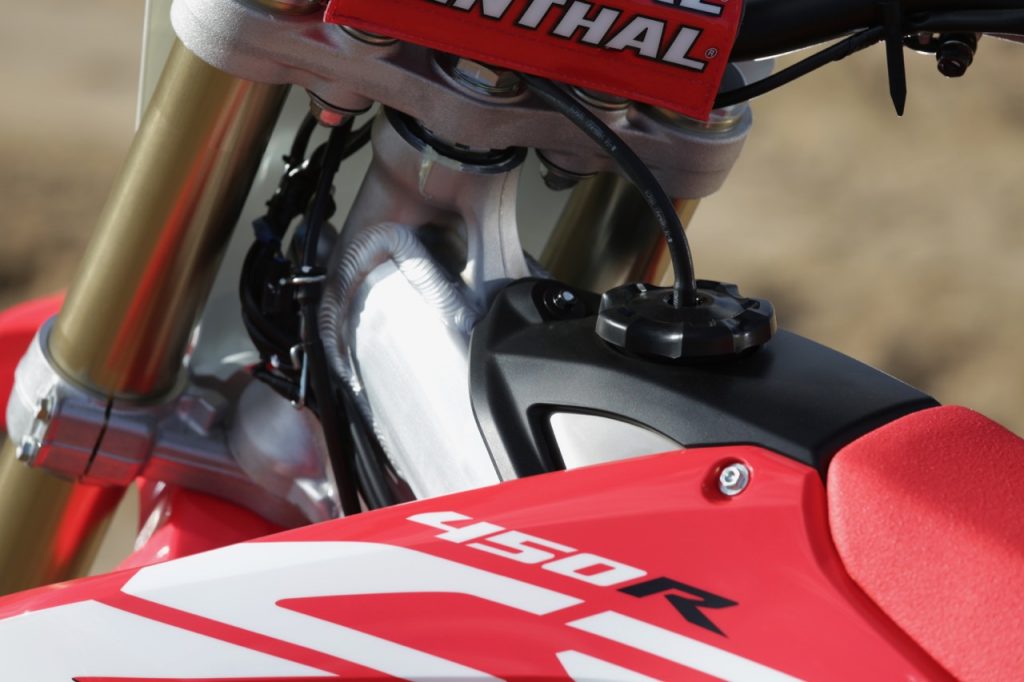 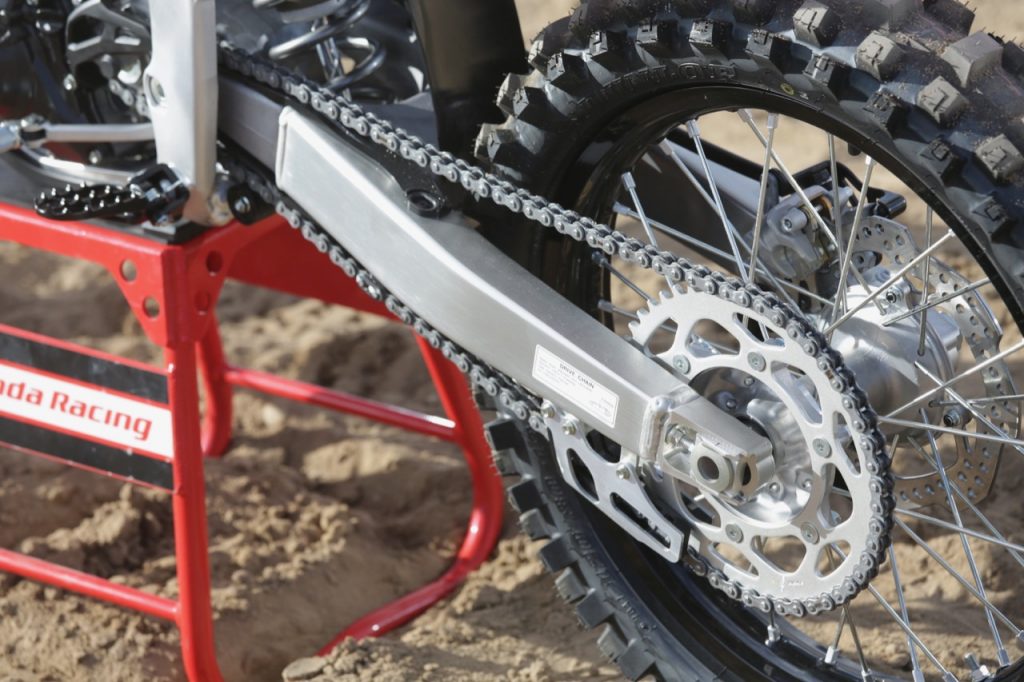 4. CHASSIS
The new frame feels drastically different from the MY18 model year. It is substantially better under acceleration whether you are exiting corners or blasting down a straight. The slimmer crankcase has no provision for a kickstarter which meant the engineers could keep the right frame spar a lot straighter.

The rigidity of the chassis, combined with the lighter swingarm, has had a positive effect on the stability of this bike when you are hard on the power. And you feel it straight away.

The 2019 does feel slightly softer in the front-end when hard on the brakes entering turns, which could be partly due to the increase in stopping power up front, but the good news is that with a few damping changes you can fix this. We tried pulling the fork up further in the triple-clamps to almost flush which helped the overall balance under brakes but seemed to sacrifice some of the Honda’s aggressive turning traits once you got to a corner.

I found that by firming up the compression (I had to go all the way in to three clicks from stiffest) and by running 107mm of ride height at the rear the bike was a lot more balanced and settled nicely around the whole track. The biggest difference to handling though came from running the rear wheel as far back as I could with the chain adjusters.
It made that much of a difference to the Honda’s handling that you may want to consider buying yourself a strong after-market chain and immediately setting the axle where you want it, basically as far back as you can. The new chassis means that you no longer need to take out mid-pipe exhaust bolts or rear tank mounting bolts to help with chassis flex and handling, so leave that T-bar in the toolbox. 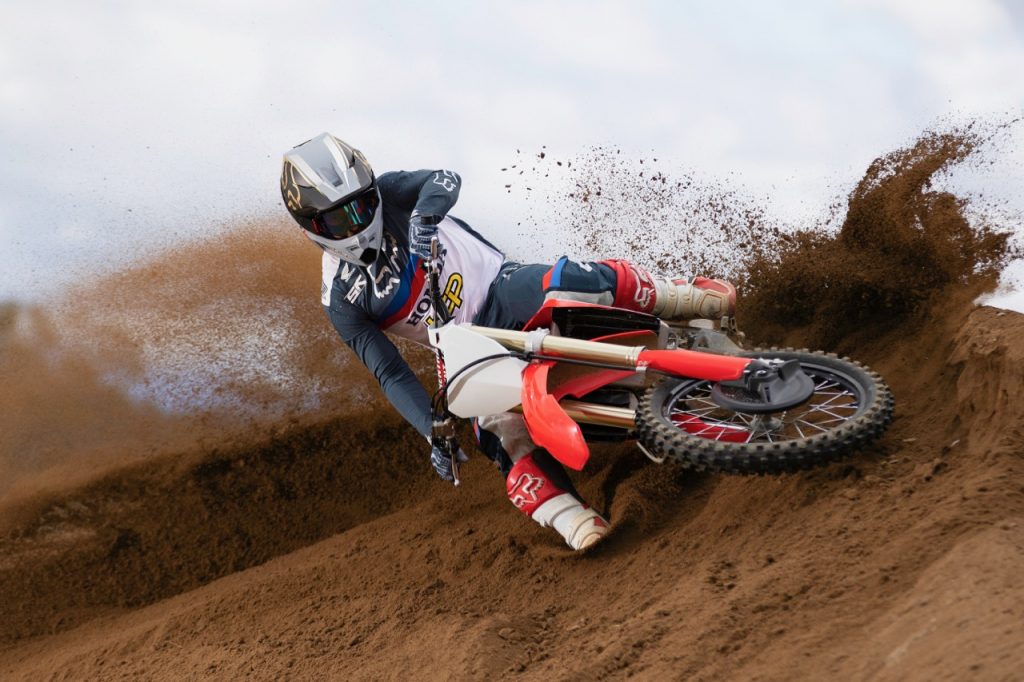 5. SUSPENSION
The changes that Honda has made to the chassis and monoshock linkage are huge improvements, particularly under acceleration. The new fork specs are an improvement over last year’s settings as there are no harsh spikes in the stroke which we saw from time to time last year.

The only thing I found was a slight deflection in the front-end under brakes which is mainly due to the softish damping. This isn’t a characteristic of the new chassis, but a case of the fork being slightly softer than the shock.

I found that by stiffening up the fork compression almost as much as I could and by softening the high-speed compression on the shock and slowing the rebound (I ended up at seven clicks out) that the bike was exceptionally well balanced with no deflection entering turns.

Getting the bike to drive well out of turns is the easiest it has ever been on a red machine, but if you want the rear to settle nicely for you when entering choppy turns I don’t suggest any less than 107mm of ride height. The linkage seems to prevent the bike from squatting too much under harsh acceleration and really seems to keep that rear-end in the nice part of its stroke.

This was an area that was very sensitive in the 2017 and 2018 Hondas and meant that you really needed to be spot-on with your spring rates. The high-speed and low-speed compression adjusters on the Showa shock are quite sensitive so when you are playing around with the clickers make sure that you don’t do any more than two clicks at a time. 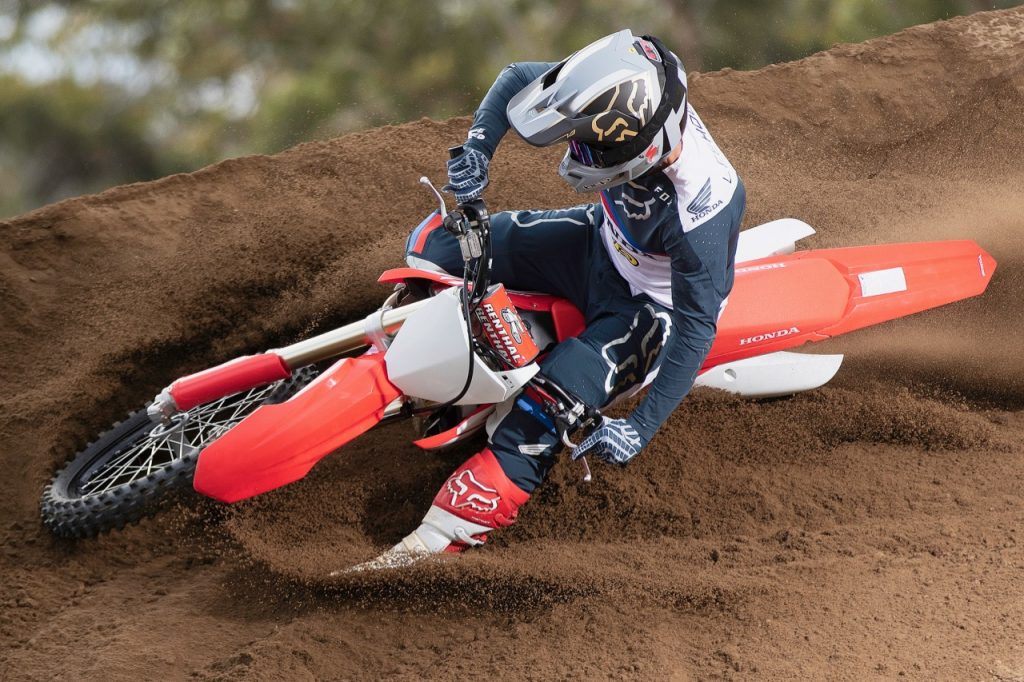 WHAT’S NEXT?
Starting from the top of the bike, the first thing I would get rid of is the standard handgrips. The stock Honda ’grips seem to be a bit bigger in diameter than some other brands on the market so, unless you’ve got the hands of an NBA player, you might want to head down to your local accessory dealer and get yourself a set of handgrips that suit your hand size and also bring into consideration how often you ride the bike and how hard you death grip it.

The next thing I would do is fit a set of stiffer fork springs just to hold things up a bit more at the front with my extra body weight. Other than that, you really don’t need to do much in the way of mods to this bike to go racing, whether you are a clubman or a national level racer.

I’d even go as far as to say that, for the first time I can remember, you could seriously consider keeping the stock exhaust system. The gripper seatcover works a treat, the disc brakes are fantastic and the overall package is top notch.

VERDICT
The 2019 Honda CRF450R retains the good qualities that were introduced in 2017, including some of the most comfortable ergonomics in the class and a proven 49mm Showa spring/cartridge fork. On top of these proven features, Honda has added some serious horsepower right where it was needed, modified the frame to assist handling under acceleration and thrown on a front brake caliper that will quickly remind Honda riders that the strength of their pinky is all that is needed to pull you to a grinding halt. The latest Honda CRF450R is sure to open some eyes.