For diehard Husky fans, that capital H on the radiator shrouds doesn’t just stand for Husqvarna, it stands for Holy.

Last year, we saw some big changes from parent company KTM Industries AG. The Husqvarna FC 450 frame was made stiffer and the power was made softer off the bottom. It got a new cylinder head and a slightly new look. There were already a few major differences from its sister brand’s motocrossers, but the distinctive MY19 plastics really separated the Husky from the KTM.

The new-look Husky’s rims were D.I.D, the clutch hydraulics were Magura and the handlebar was from ProTaper. The airbox was also a distinct design that was integrated into the two-piece carbon polyamide subframe.

For MY20, the Husqvarna’s suspension has been tuned differently from the KTMs. It still uses a WP Xact air fork and a WP Xact monoshock, but the valving and the rear spring rate are different from the KTM 450 SX-F. 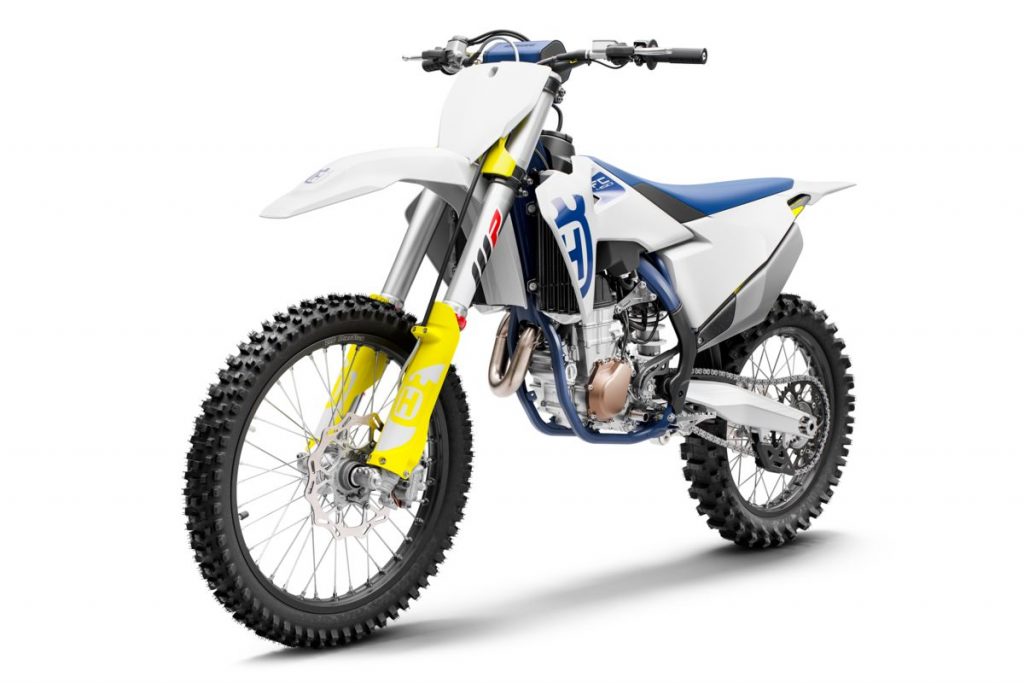 The new suspension settings for the Husqvarna FC 450 are a little cushier. The rear spring rate is 4.2Nm, as opposed to 4.5Nm on last year’s model, the recommended air pressure in the fork is 10.7, as opposed to 10.9, and the valving is different front and rear.

The Husky muffler is still slightly different from the KTM’s, with a little cone-shaped baffle inside, and the FC is often criticised for being a little softer in power off the bottom due to this, along with the different airbox. Rather than opening up the airbox for MY20 and disappointing the people who liked the softer power curve, Husky decided to include a vented airbox cover to provide more airflow. In the spares kit there’s also another throttle cam. A gray cam is on the bike but a larger black one in the kit makes the throttle open much more quickly.

The Husqvarna FC 450 has been running a map switch for a while that has three functions, it allows you to switch between two engine maps on the fly, to activate traction control and to switch on launch mode. Both of the engine maps have been redesigned, with map two providing a seriously aggressive power curve. 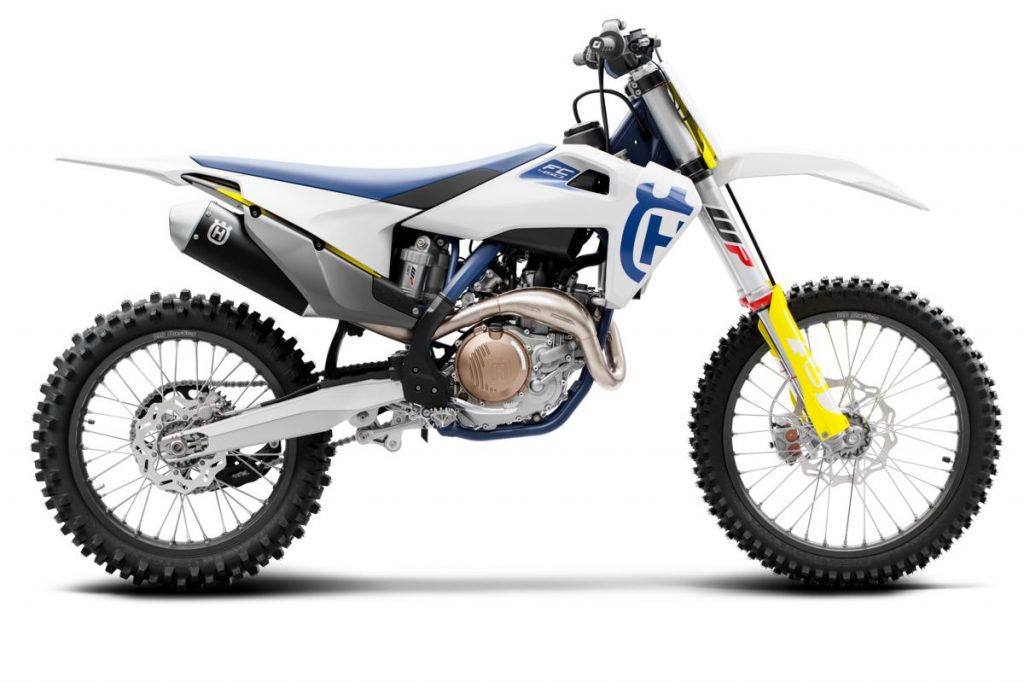 Other changes for this year include the switch to a 49-tooth rear sprocket from a 48-tooth and the piston skirt has been altered for increased reliability.

On board, the power feels very much the same. It is soft off the bottom and user friendly. The throttle response is not as aggressive as some other 450s but there is still plenty of mumbo once you get the FC going.

This kind of power has its place as it is less intimidating and scary for newer riders. It makes the Husqvarna FC 450 easy to handle and very predictable. This is where it gets different though. Bolt in the larger throttle cam, flick to the aggressive map and clip on the vented airbox cover and you have an entirely different beast.

The power becomes much more aggressive and the engine revs pick up much quicker. You better be ready for it because if you’re not the FC will leave you sitting on your backside while it takes off down the track.

These extra bits in the spares box really make sense to me, as Husky has been able to make a bike that fits two different styles of rider by just sticking a few extra parts in the box. That’s a win in my books.

The revised gearing I thought worked well and the transmission does just what you would expect from the European manufacturer. The hydraulic clutch is a winner over any cable-operated system but I really wish they would use the Brembo master cylinder that’s used on the Katos as I believe it has a much nicer feel. 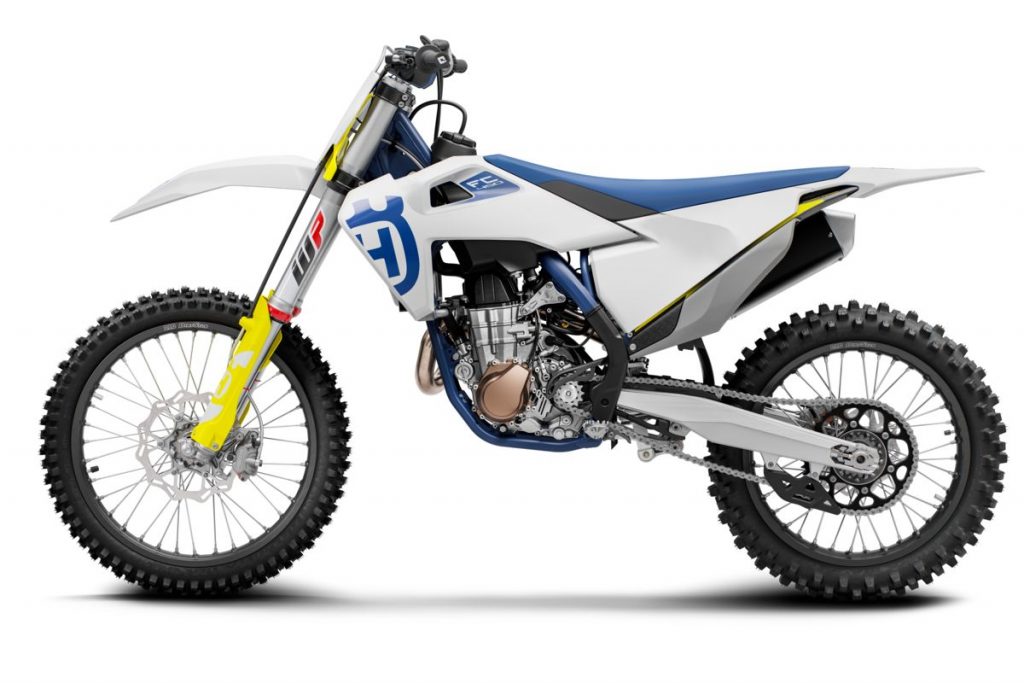 The suspension on the MY20 model is plusher and smoother. Don’t be fooled, because I didn’t say soft. The initial part of the stroke is plush and much more compliant over smaller bumps. The suspension is very progressive though and does a good job of stiffening up through the stroke to absorb the bigger bumps.

This softer valving does make the bike ride a little lower and it took a bit to get used to. I had to play with fork pressures to get the bike balanced but, when I did, I found the valving worked very well.

The overall feel of the chassis is quite light. It feels nimble because of its low weight and, together with the plush suspension, it is very easy on the rider. Faster A-graders might want to crank up the clickers but, for the average club-level rider, I feel the guys at Husky have nailed the suspension and have tuned the package to a set up that suits the average rider, not just the elite.

The brakes on the FC have always worked well and still do but if I have to complain about something then it’s got to be the seat. Years ago we asked for more grip but I feel like now someone is just taking the micky out of us test riders. The Husky seat material is so sticky that I could sand the paint off the walls of my house with it!

The Husqvarna FC 450 comes with an interchangeable airbox cover. The cover that’s fitted standard is sealed but, in the spares kit, you get a vented one (above) that allows the engine to breathe much more freely. The spares kit sideplate doesn’t seem to have a great effect on power up top but off the bottom and through the mid-range is where it is most noticeable.

The last option that Husqvarna gives the rider is the two throttle cams. The bike comes with a larger throttle cam in the spares kit that opens the throttle body much quicker. These options on their own make small differences but, when you run them together, you get a serious weapon. The power becomes much more aggressive and abrupt and you need to start holding on much tighter.