A focus on motocross saw it neglect what was a formidable enduro line-up and, despite our years of whinging, left us with an agricultural commuter known as the KLX250S, an outdated KLX450R, an adventure-oriented KLR650 and a handful of fun bikes. So when Kawasaki released three new models in one year we were knocked off our seats. We’ve already tested the KLX230R and road-legal KLX230, and now we throw a leg over the Kawasaki KLX300R.

The Kawasaki KLX300R impressed us more than any bike has for some time. Not because it’s the fastest, it’s certainly not, or because it has the best handling, but because it’s a purpose-built mid-cap trailbike and it nails that brief. Let me explain.

Kawasaki’s KLX300R is powered by a proven 292cc version of the KLX250’s DOHC, liquid-cooled engine. KHI mates this to a solid Keihin fuel-injection system that squirts fuel into a thumping 78mm bore. The end result is an engine that builds its revs like a diesel tractor rather than wastefully disposing of them like an SS ute on nitro.

The KLX300R possesses more torque than any other mid-cap enduro bike. Sure it signs off like your local council on a high-rise building project but the KLX-R isn’t designed for screaming around a grasstrack (although we did try). 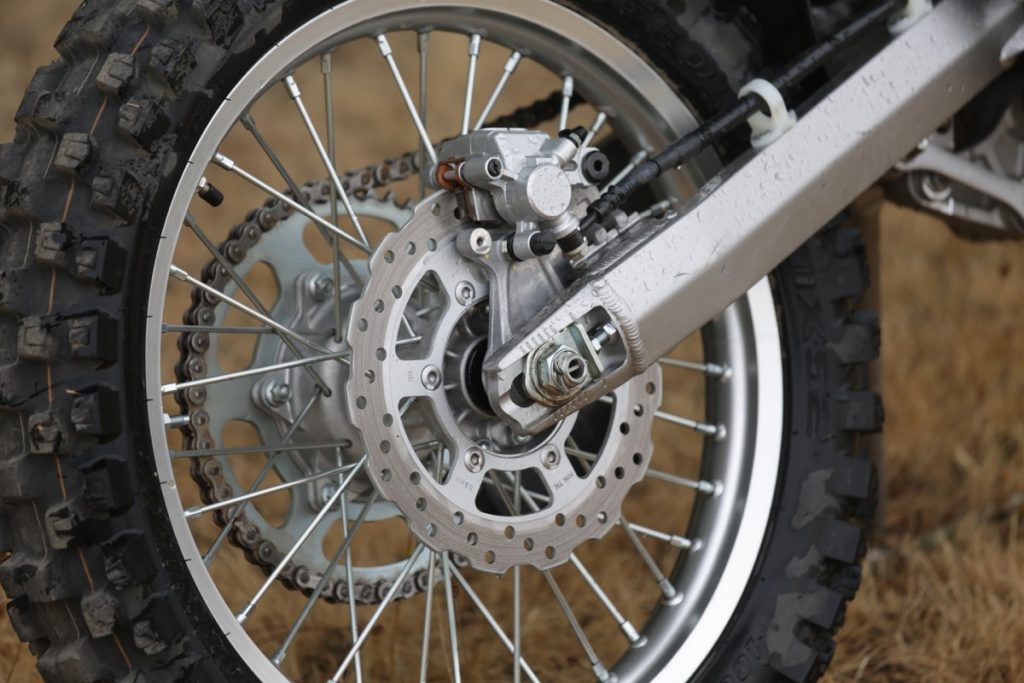 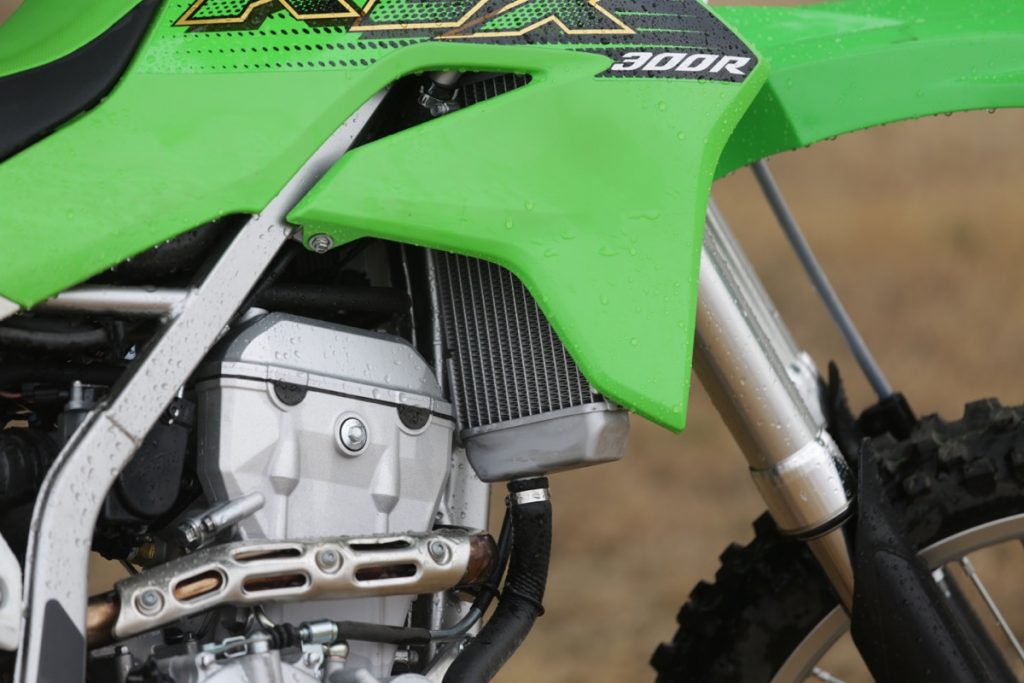 Gearing was spot on for the farm-like trailriding we pedalled it through. However, we also attempted some extreme enduro and we can reveal it did that more easily than the 450F enduro machine accompanying us. The slower-revving engine and well-spaced gear ratios (yes, all six of them) allowed us to flick between first and second as we bounced through dry creek beds and up steep pinches.

On one section of extreme, the trail requires you to build momentum over a few bike lengths before ascending a steep hill strewn with fallen trees. While the Kawasaki KLX300R didn’t explode out of the blocks like the 450F did, it still built enough momentum to crest the hill without problems. The rear Geomax refused to break traction, unlike the 450F which was left trying to wheelie or break traction depending on when it wanted to spit off the rider. More often than not, a mild-mannered, linear engine is of more value than an explosive, converted motocrosser. The KLX300R is not going to win any drag races but it will go anywhere your mates on more powerful bikes do and, in some cases, even further.

When out on the fire road the six-speed ’box was excellent. The first four gears were a little close but by the time I hit sixth I was doing well over the speed limit. But seeing as registration isn’t available for the Kawasaki KLX300R top speed isn’t necessarily that important. 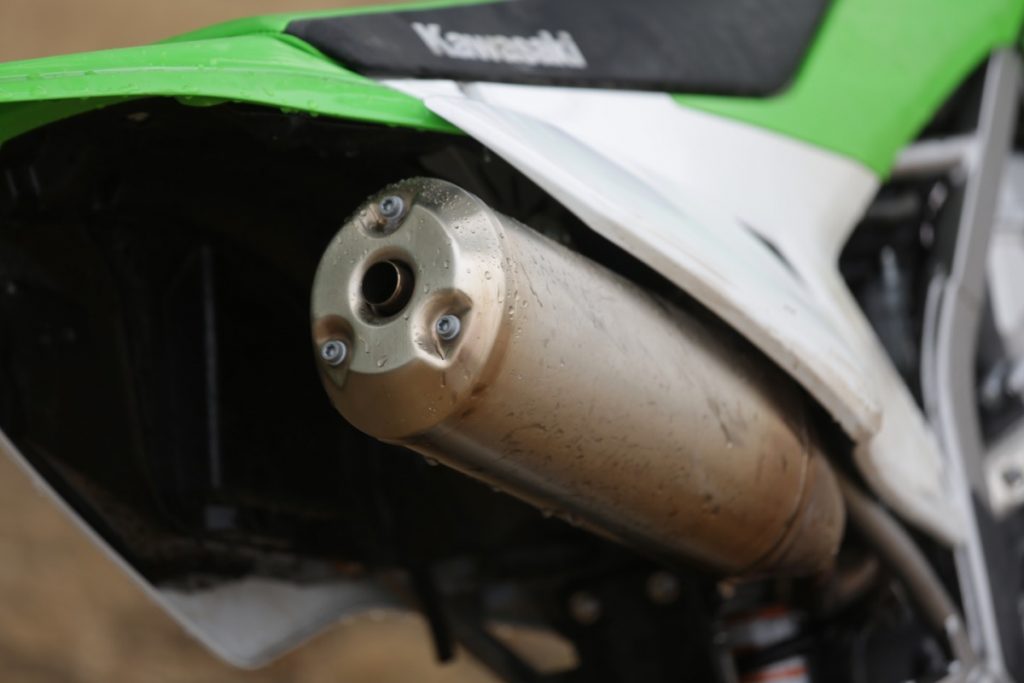 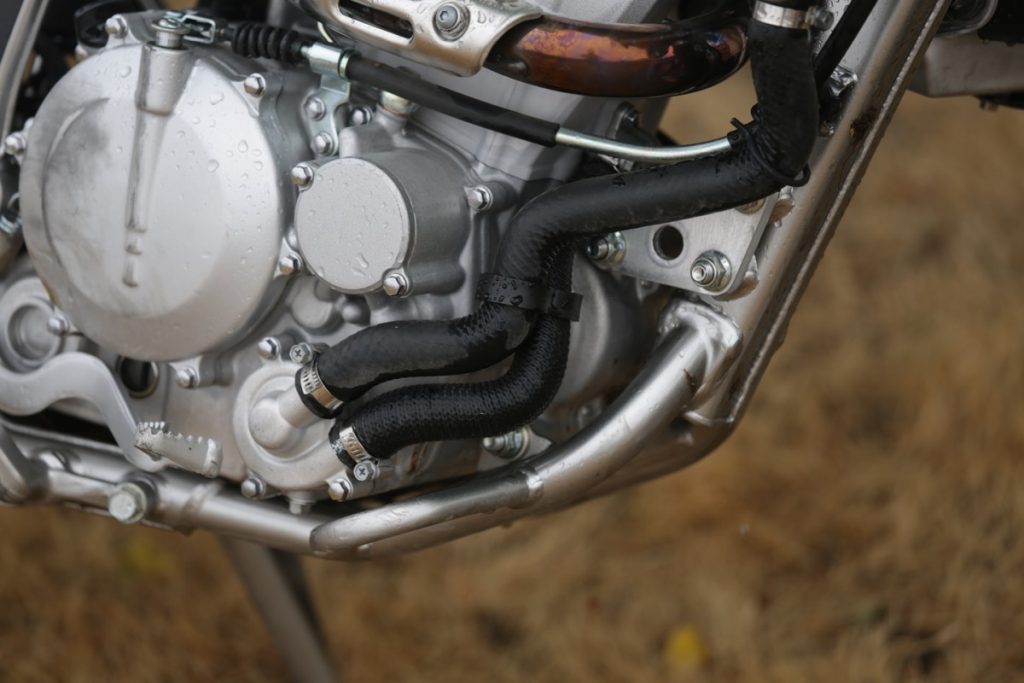 SMOOTH OPERATOR
Seeing as how this bike isn’t a full-blown enduro, Kawasaki opted for less-stiff suspension and, for the most part, this is a good thing. Don’t forget, this is a trailbike, it’s not designed to win the AORC so the more soft and forgiving the suspension is, the better. Kawasaki has employed a KYB 43mm USD fork with adjustable compression damping and a KYB monoshock with adjustable preload, compression and rebound damping.

Both ends offer 285mm of travel and, in case you’re wondering where that sits, the Yamaha WR250F runs 310mm up front and 317mm out the back. So 285mm isn’t bad and at no stage did I feel it needed more travel. We weren’t sending it off big jumps but we did hit the odd erosion mound and it handled most of what we threw at it with no major concerns.

The soft suspension ate up the hidden rocks and logs underneath the tussock and in the extreme enduro section the suspension sagged enough to allow me to comfortably get my feet on the ground no matter what position I found myself in. It didn’t feel harsh but it also didn’t feel like a pogo stick. 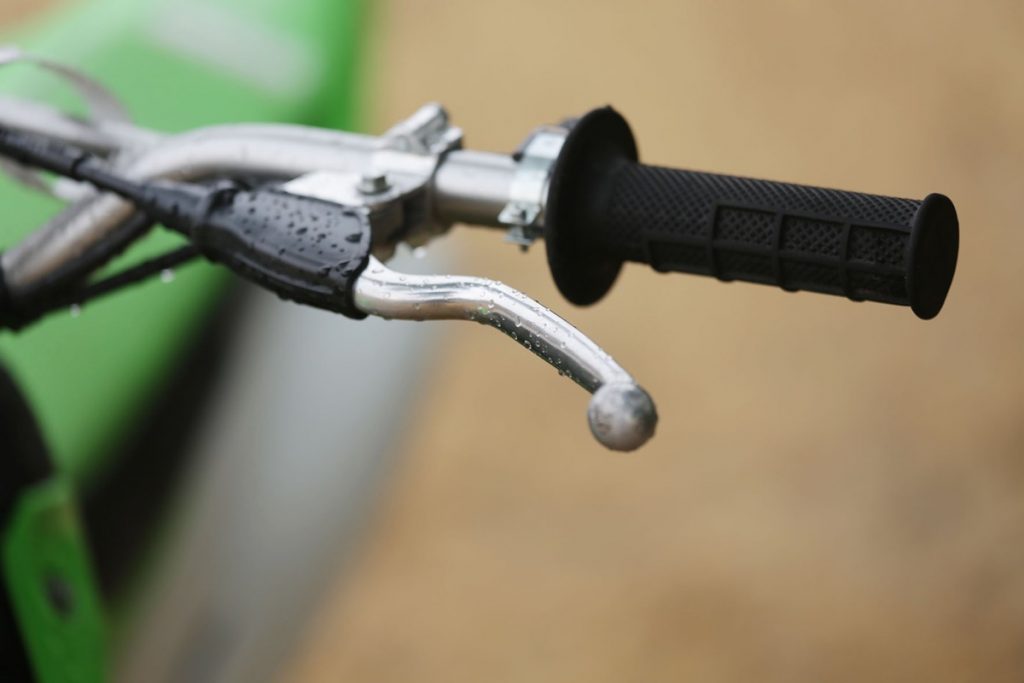 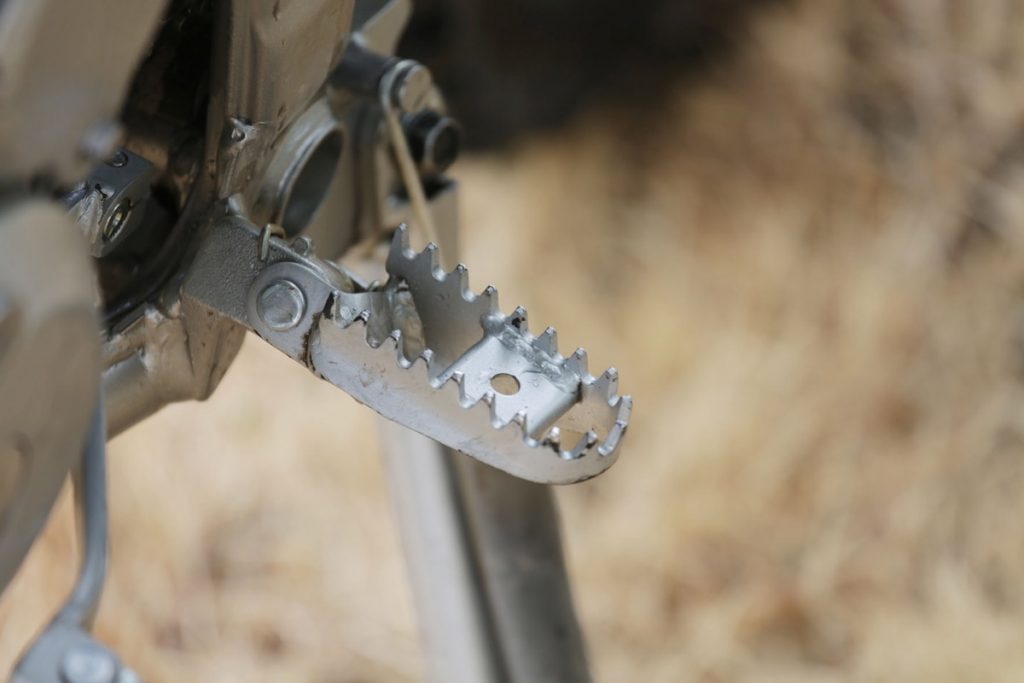 One area the suspension certainly isn’t designed for is hard braking bumps and sharp, deep ruts. We had access to a well-used grasstrack with ruts you could lose your car in and on one particular off-camber, sharp rutted corner I nearly put the handlebar through my gut as I drove the fork travel into the ground and it unloaded like one of NASA’s rockets.

The knifing action spat me out the high side of the rut and my feet came off the ’pegs in typical goon fashion, but I stayed upright. I made a mental note and when I came back round I started braking earlier so there wasn’t as much pressure on the fork. The Kawasaki KLX300R then glided through with finesse and poise.

While it may mean riding slightly slower, you will benefit from avoiding big holes, hard braking and large braking bumps. Just back it off and cruise. Don’t attempt to ride the front brake hard entering tight corners, you will come off second best.

The bike felt comfortable to stand up and steer with your legs and the agility, while a little top heavy (the seat height is 925mm just under the WR250F’s 955mm) from a tall fuel tank, isn’t drastically effected. The seat scallops out a fair bit from the fuel cap back, so getting your weight forward wasn’t easy. It also means you sit in the bike not on top of it. But for trailriders who are happy to sit, it means your legs are closer to the ground and the seat is comfortable enough to park your arse on it all day. 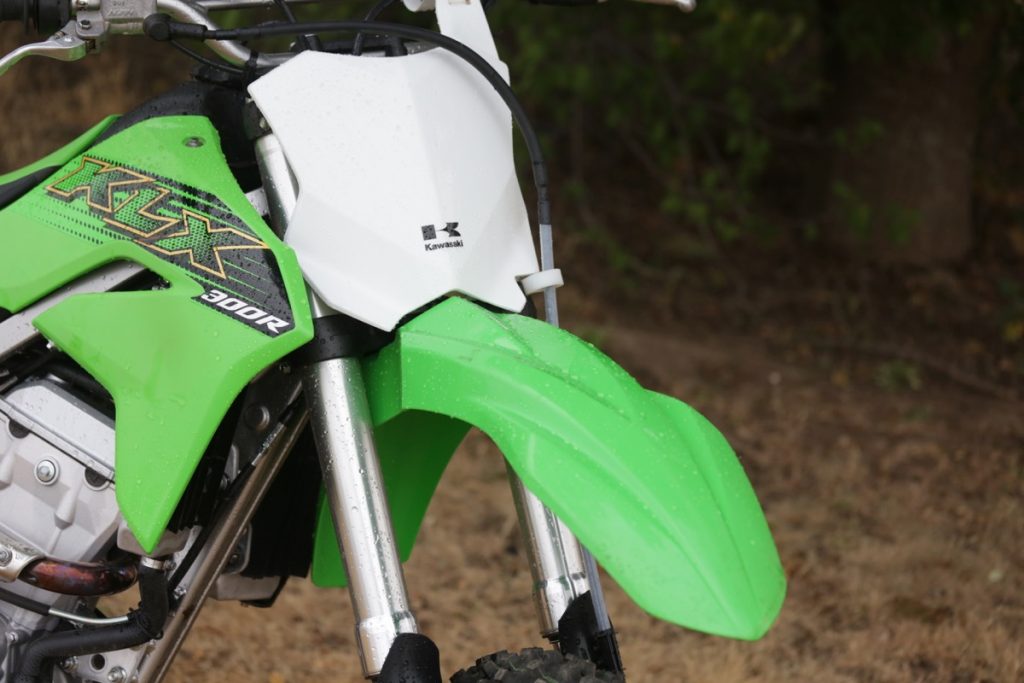 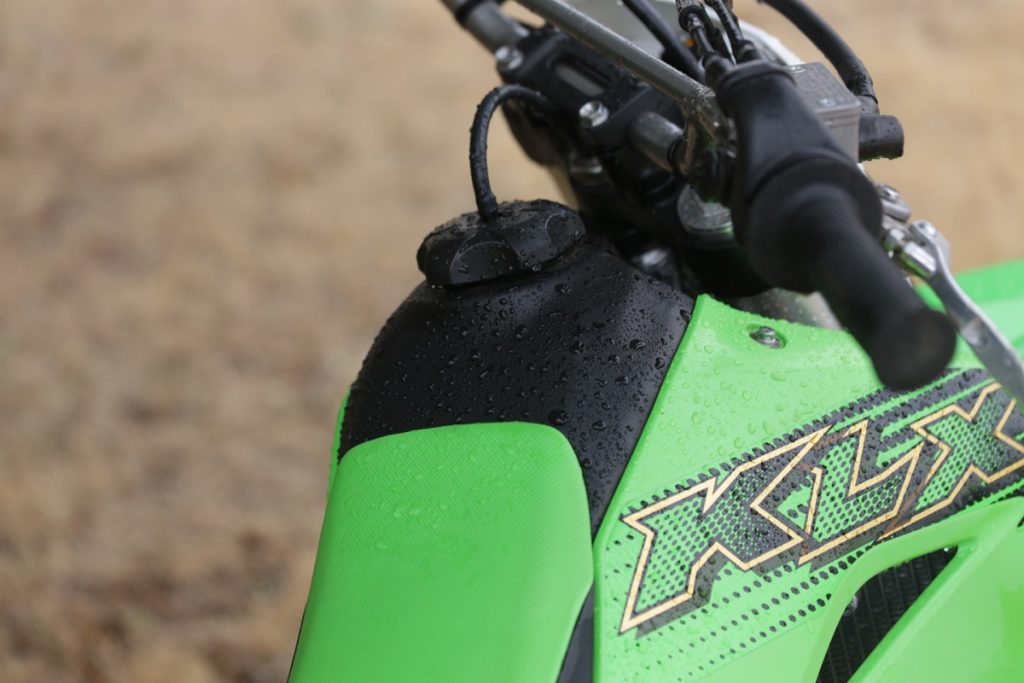 The frame is a little more sparse then what we are used to seeing on enduro bikes but, for the cruisey riding we did, it remained stiff enough while still being able to flex when we twisted and popped it over logs, jumps and other obstacles. It might look like a cheap bit of gear but for the KLX’s intended purpose, it will suffice.

Kawasaki isn’t renowned for finishing its products with the best bits money can buy. We usually see customers with Kawasakis opt for aftermarket ’bars, levers, handgrips and exhausts and the KLX300R is no exception. The pipe is hard on the eye and it would have been nice to see Kawasaki contour the pipe like they did the swingarm (which looks and feels exceptional by the way).

In standard trim the KLX300R does not come with handguards or a bashplate, a decent handlebar or levers. For most trailriders the ’bar and levers will be fine until they’re bent or broken but some aftermarket protection gear will need to be purchased, if you plan on crashing.

Like most modern enduro bikes the KLX300R is electric leg only, and for the few days we had testing it, the KLX300R battery and starter motor were up to the task. The KLX-R pinches a bunch of DNA from its KX brothers with motocross-inspired graphics and plastics and the four handlebar mounting positions mean the KLX300R can suit a variety of rider heights.

Despite looking big, the fuel tank is only 7.9 litres which seems to be the going rate nowadays. We could easily get a day’s trailriding on a tank but for rides in excess of 120km we suggest you carry some extra fuel.

We are a little bit bummed to see the KLX300R come to Australia without ADR compliance but, if the KLX250 and 230 are anything to go by then we’re glad it didn’t. The ADR restrictions placed on some manufacturers are ridiculous and if KHI was to produce the 300 for registration it would be so loaded with junk no one would buy it (our feature on the KLX230 will explain the great lengths Kawasaki has to go to for registration. Not fair).

BITS AND PIECES
Instead this bike will have to be ridden by those with private property or riders who do most of their bush bashing at ride parks.

The KLX300R is the perfect trailbike for those wanting to cruise around after their kids or even bash through some more technical terrain. The engine is a tractor and the suspension is incredibly plush. I for one wouldn’t want a trailbike built any other way. But the most attractive feature is the price. For a little over $7k you’re getting a competent trailbike that will go most places a high-powered enduro bike twice the price will go. If you’ve got the space to ride it away from the boys in blue the KLX300R really does scream value for money.

A Woman’s Whip
We got two girls to ride this bike, Bec Wilson and Jess Handebo. Both loved Kawasaki’s KLX140L but were worried they would outgrow it too quickly. The next step up would be the 230 but what if they jumped to the 300?

At between 160 and 170cm Jess and Bec felt a little intimidated by the size of the 300R. It felt to them like a full-size dirtbike. Jess rides her partner’s WR450F and with a little help starting, stopping and turning she is capable of ripping around a grasstrack. But to own a full-size bike was not their cup of tea.

They concluded that if you’re already confident on a 230 and can hop logs, rocks and turn around without putting your feet down or you’re tall and strong then the Kawasaki KLX300R will be fine. The power and handling are so easy to use it just comes down to dimensions. The clutch pull was light and didn’t give them arm pump despite being a bigger donk than they’re used to and the brakes felt just as strong and pulled the bike up just as quick as they’re used to on the little bikes.

And with an electric start the girls weren’t worried about having to get one leg on the ground while they kicked it over. They could start the bike with the stand down (a benefit of no ADR) and flick the stand up when they took off.

It had been three years since the Austrian outfit overhauled its enduro range for MY17 (ADB #442) so we were anticipating big changes for the 2020 KTM EXC range.

Did ADB's Dylan Ruddy photograph your young child at the 2017 Australian Junior Motocross Championships? Check out the full event wrap in ADB issue #459.