Two women, Sally Plunkett and Ashleigh Smith talk about their return to riding and racing dirtbikes after childbirth.

Family is everything. It’s the one thing in life you cannot change. In the words of the legendary Don Corleone in The Godfather trilogy: “The only wealth in this world is children. More than all the money, power on Earth, you are my treasure.” While they might mean everything to model fathers like Don, when one of those little treasures comes into the world it’s the mums left holding the bag while the other half is off riding his dirtbike!

Yeah, yeah, I know, we are an integral part of that treasure’s first days on Earth. But don’t forget, if it wasn’t for us, humanity would cease to exist! Ever thought of that while you load up the bike to leave us stranded at home all Saturday breastfeeding, changing nappies, settling, bathing, the list goes on. While our treasures are absolute blessings, there comes a time when we too feel the urge to twist the wrist again.

Our bodies go through an incredible transformation but also an incredible amount of trauma. To recover from this takes time, but just how long is long enough before it’s our turn to load up the bike and leave the man of the house with a wearable boob, a bunch of clean nappies and a set of good noise-cancelling headphones? 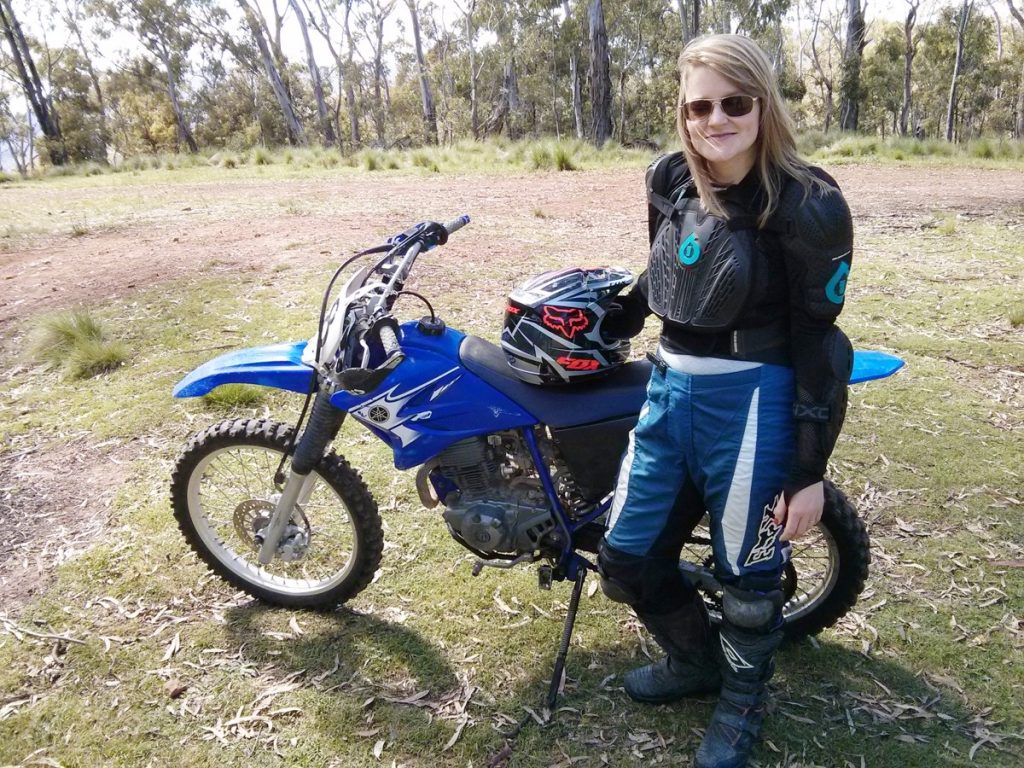 We caught up with a couple of ADB readers who have had children and spoke about their return to the hot seat. Here’s what they had to say:

Tell us a bit about yourself and your riding experience.
Sally Plunkett: I’ve been riding my TTR-230 Yamaha for about eight years. My brothers have ridden since they were little, so I learned how to ride early on but didn’t get my own bike until I was about 20. Most of my riding has been in the beautiful Sunny Corner State Forest, NSW. We go camping there a few times most years, and it’s my favourite place on Earth. I was four months pregnant with my daughter (Freya, now one) on our last trip there. So although the camping was glorious, it was so hard not riding [while expecting].

Ashleigh Smith: I’m from Townsville, North Queensland. I currently share two bikes with my husband, a Husky 450 and a Yamaha 250F, and race just for fun since having kids. Pre kids, I rode for the Rising Sun Motorsport team on a CRF250R and CRF450R and was Australian Women’s Long Track Champion. I predominantly ride in the NQ region – Cairns, Townsville, Ayr – but when I was racing competitively, I was racing in NSW, Qld or wherever the state and national events would take me. I race dirt [track] and long track and the occasional motocross event. I have two kids, Peyton who is 7 and Ryder who is 3.

How long did you take off riding after having kids?
Sally: I didn’t know how long it would take me to get back on the bike. I usually fall off a lot: spat off for riding up a rut, over the handlebars if they get stuck between trees, slide off sideways going up snotty hills. So, I knew I wanted to feel 100% confident in my body before going out again. For women who solely ride on the road, it would be a bit different. I imagine I’d get back on quicker if I knew I wasn’t going to come off.

For me, two-and-a-half months [after the birth] was the perfect time to get back on. Giving birth was ridiculous and I’d had to get stitches so I took a little while to heal. I’d imagine for caesarean births it would be a longer recovery time. My abdominal muscles had to come back together properly and feel strong enough for me to consider riding. Because without ab muscles doing half the work, my back would have been wrecked.

Ash: After having Peyton, I was living in the UK with my husband as he was racing speedway there. So, it was six months before I got back on a bike. After having Ryder, I was back on the bike within three months competing at the Townsville Motorcycle Club. Peyton is now racing herself on a 50cc and rides a Junior speedway bike. Ryder gets around on a CRF50 already as well so I definitely think we will be around the race tracks for many years to come! 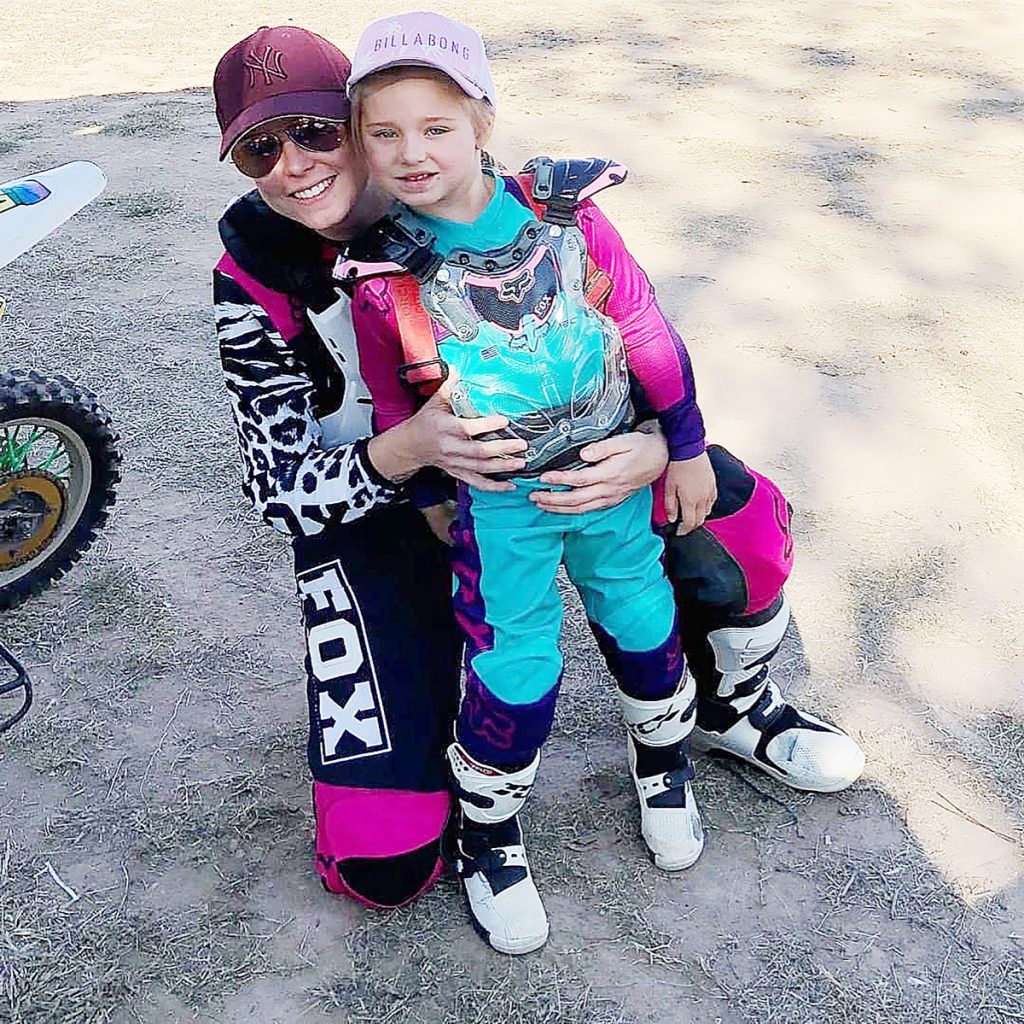 What were the biggest barriers you faced when returning to riding after having kids?
Sally: My biggest was a mental one.
I’d healed fully from my labour. Physically I knew my body was ready, but I was nervous that I’d forgotten how to ride. But when I got back on it after a year (pregnancy and birth), it felt like I’d never been off. Early days with a newborn are rough, I was on the endless loop taking care of Freya; feed, change, comfort, sleep, repeat. So, doing things that made me feel like my old, capable self was revitalising.

Timing is probably the biggest physical barrier for me riding now; the stars have to align in order to get in a good ride. I exclusively breastfeed, so I feed her before a ride and go for shorter rides. As she got older it got easier. She loves her food now, so I know soon she’ll be drinking less breast milk and I won’t need to check in with her as much.

My mum has been so awesome, minding Freya while I ride on their property in Somersby. My husband and I haven’t gone on any big rides since bubba, but I imagine we will be back to taking turns riding when that happens.

Ash: When returning to riding/racing after having kids, the hardest part was ensuring that you had someone on hand to watch the kids for those few minutes you are out on the track! Also, you lose so much fitness and muscle throughout a pregnancy, things that felt easy before seem a little harder. Also, I would say my competitiveness definitely died off slightly after having them because, at the end of the day, you want to be able to look after them first, you can’t afford to be hurt yourself with a baby/kids!

It definitely helped to have my amazing mum on hand to help me out at the track when the kids were that young. I just always had to ensure that I was keeping up with food and water because, on top of all the energy you use while riding, I was breastfeeding. I would put the kids in the pram and take them for walks in between races and both my kids were amazing, they could sleep anywhere (and through the noise) so I had no issues putting them down in a portacot for sleep at the track. 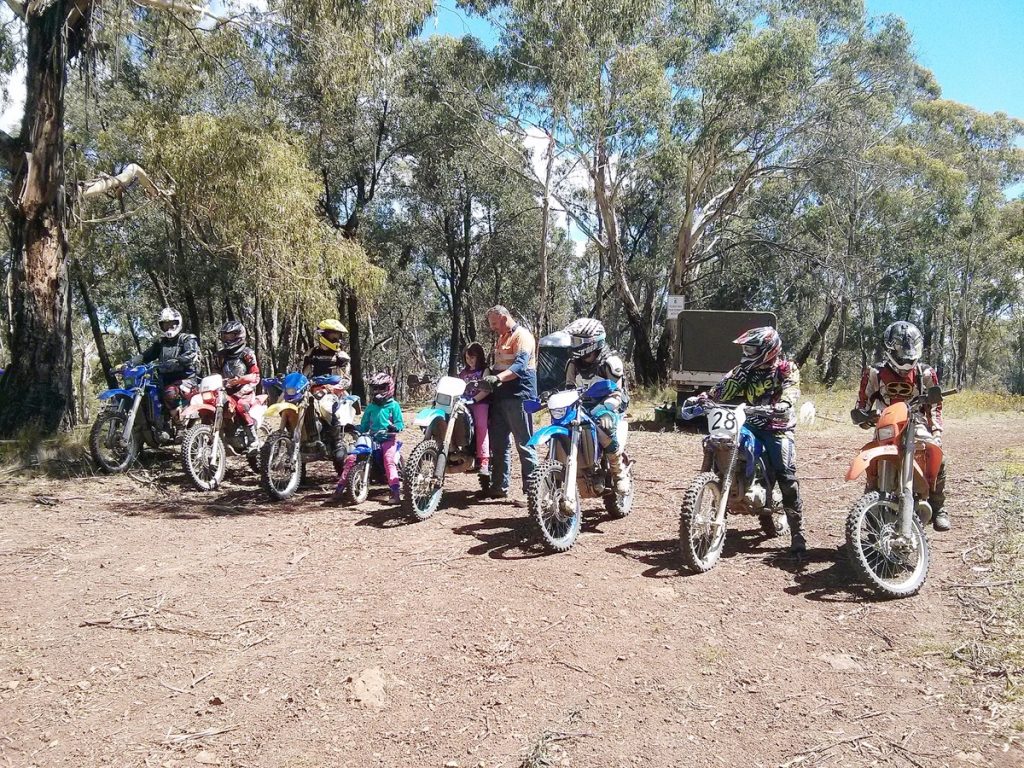 Were there any training or exercise routines you implemented to help with your return to riding?
Sally: Doing pelvic floor exercises is extremely important for every woman to do, but especially after giving birth. For me, getting back into a familiar exercise was the best way to strengthen my body. So, I very gently started back running. Initially, the exercise made my insides feel like they were in the wrong places, and I was all achy. But it got better and once running felt normal, I knew I was right for the bike.

Ash: I did a fair bit of circuit-style training because, when I rode the bike for the first time after each child, I was so shaky and completely exhausted. So I really had to work on regaining some strength to be able to hold on. Especially through your core and lower back muscles, that’s where I definitely felt it the most initially.

Is there anything that you changed or would recommend to have on your bike to make it easier to start back after being a mum?
Sally: My bike (Yamaha TT-R 230) has always run like a dream! It’s an electric start and I don’t think I’ll ever go to a kickstart. Mainly because the act of picking my bike up after falling off for the zillionth time on some snotty hill is hard enough without trying to kickstart it! But all power to the dirtbike women who have a kickstarter! 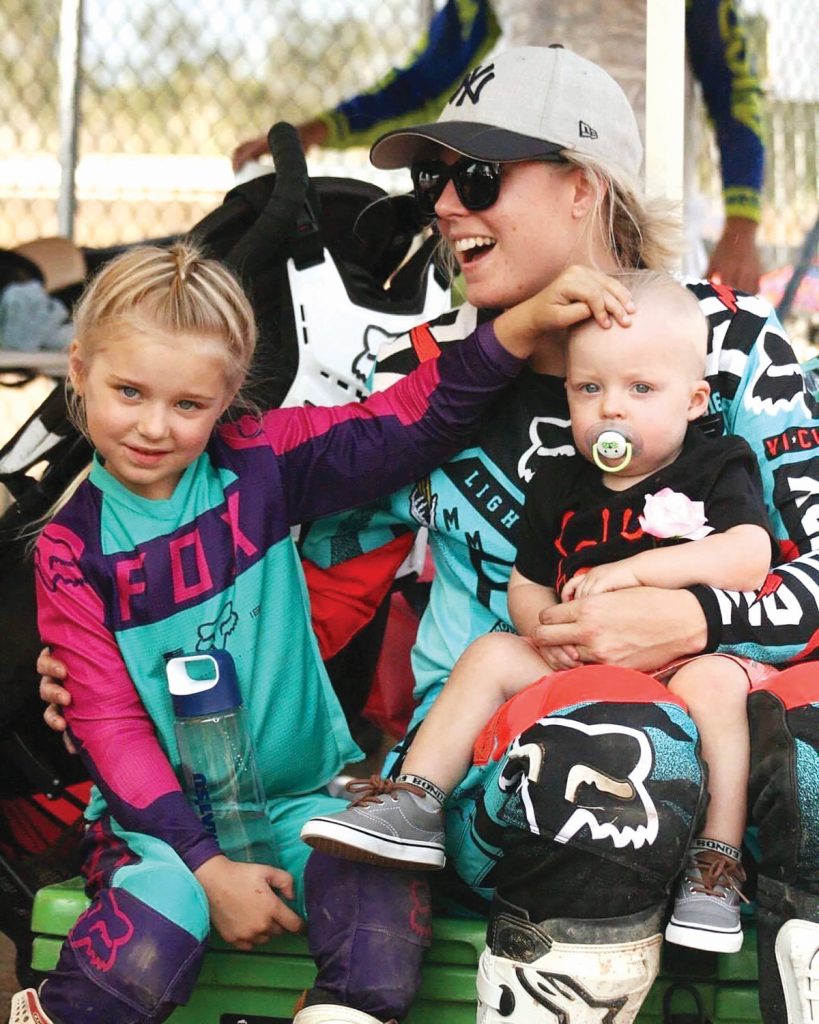 What is some advice or encouragement you can give new or soon to be mum’s to help them get back to riding?
Sally: I have two challenges for new mums. Change/reduce the expectations of yourself. If you are becoming frustrated while doing something, stop doing it. I found I’d get so frustrated and down on myself, trying to put Freya to bed at a certain time or trying to be on-time for a get-together. So I learned to just stop, breathe, and wait or try it again differently. Be a bit more gentle with yourself.

The second tip is obvious but can be easily forgotten. Do things that help you enjoy being a new mum. Whether it is getting back on your moto for a ride, walking with bub to your favourite lookout, meeting up with people you like. It helps!

Ash: My advice to mums who want to get back riding would be to definitely go for it, it is so lovely to see mums out there giving it a go whether it be competitive or recreational riding. It is so important, as a mum, to be able to enjoy your passion as well. We all give up so much for our beautiful kids that it’s nice to do something for yourself every now and again!

I would recommend having some level of fitness, and to have a great support crew behind you – your partner, mum, aunty, whoever can help with those little things while you’re out having fun on the bike.

Jemma wants you out there! 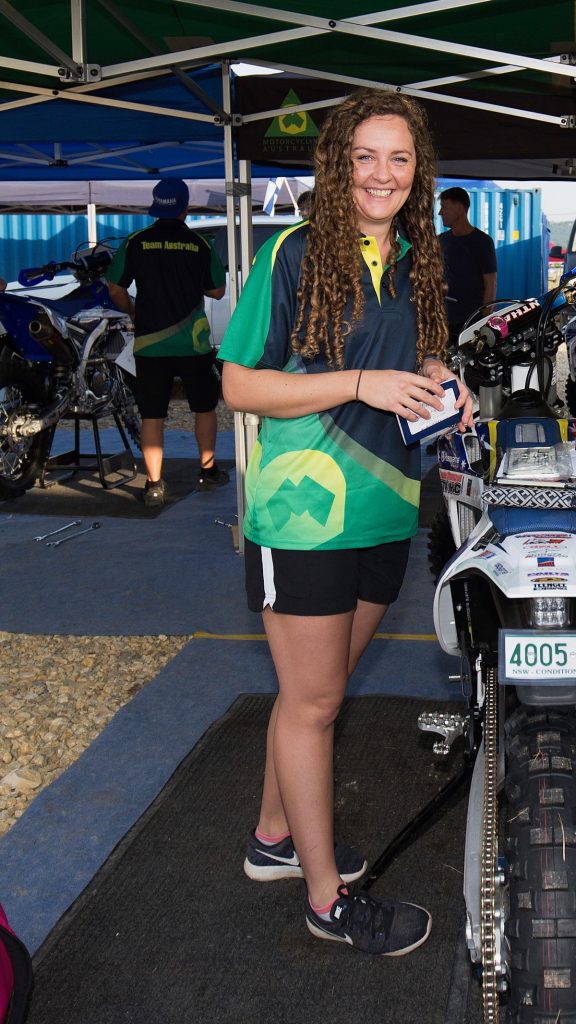 Jemma Wilson is an icon for women riders after more than a decade at the top of the off-road racing scene. Jemma won eight state championships, four Australian Off-Road Championships, five ISDE Women’s World Cup Team Championships and competed in Enduro GPs as a privateer for five seasons. She has since retired and now runs her own coaching school for all different riding levels.

Is it safe for mums to be at the track?
Absolutely it’s safe for women and mums at the track. I run a series of “ladies only” events and coaching weekends and I have had new mums come to events with their hubbies dropping in with the bub for the lunch-time feed. Every situation is different, and mums know what’s best for them, but if a mum is keen to get back riding then why not!

As someone who works regularly with women and mums, what are some of the barriers women face when riding?
I have found the biggest barrier is being scared of being judged. We all have to start somewhere but a lot of women are intimidated by the “boys’ club” nature of the sport and it can be really hard to break into.

I feel that there was also always a bit of intimidation from other women who were faster/more experienced but there has been a huge shift in recent years and women are really supporting other women and creating their own friendship groups and riding communities.

How can we encourage more women to be active riders after having kids?
Welcome them! Trailrides, practice days, clubs, parks and races all need to create an environment of inclusiveness and support. Knowledge and experience should not be assumed as, again, we all start somewhere.
This will not only encourage women to get into riding after having kids but will open up the doors for more women riders and create a family culture.