Updates to the WP Xplor fork have helped the 2020 KTM challenge its KYB-suspended rivals. But all Katos received the same tweaks, so the question stands: what to buy?

The 250EXC-F is better suited to riders who fall into the featherweight category, generally speaking. If you’re a 90kg rider carving up your mates on bigger bikes then good on ya, but not everyone can or wants to ride like that. However, the biggest issue with the 250 EXC-F is the 350 EXC-F. It’s so closely matched in weight, handling and overall feel that it somewhat negates the 250. Unless you’re racing in a specific class, most riders, and I say most not all, would benefit from going the 350 over the 250.

Moving further up the range we get into the bigger bikes, the 450 and 500 EXC-F and this is where the choice becomes tough. If you’re like most people and are considering the 350 EXC-F for its agile handling but like the look of the 500 for its power and insignificant 1.8kg handicap, maybe you should look at the 450 EXC-F. Last year the 500 and 350 EXC-F outsold the 450 EXC-F by more than 50%. The first quarter of this year has been different. The 450 has overtaken the 500 and 350 EXC-F and, after riding the 2020 model, I can see why. 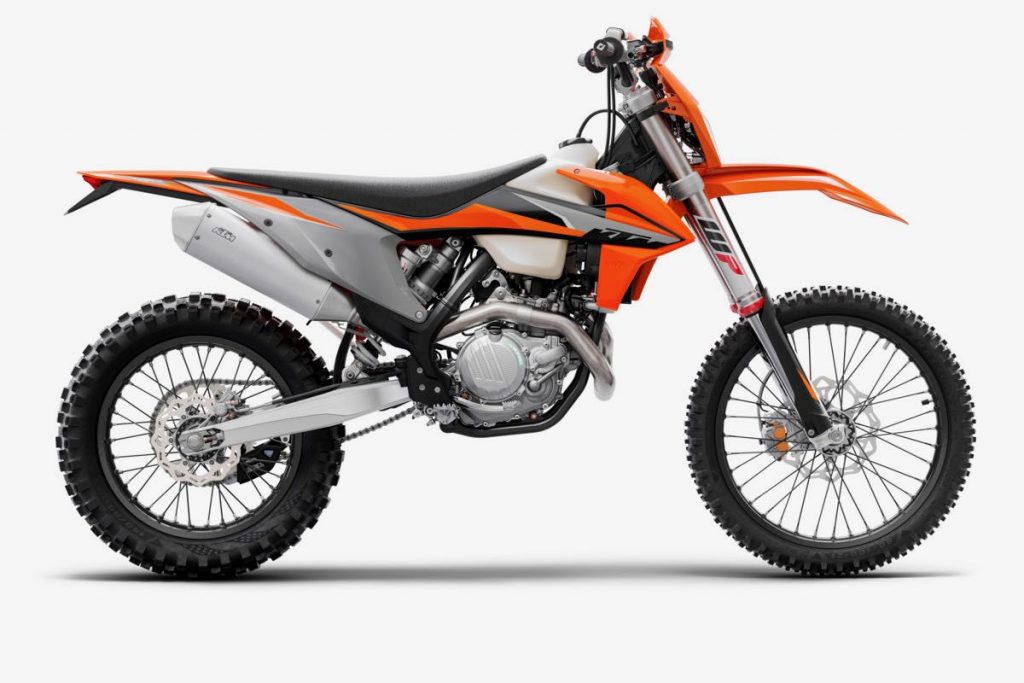 KTM’s R&D team of 600 brainiacs worked on refining almost every aspect of last year’s KTM enduro platform, which is getting long in the tooth after making its debut in 2017. Of the changes made this time, it’s the Xplor that stands out. We haven’t danced around the fact that previous versions of this fork have been at the softer end of the scale.

Although it’s unreal at trailriding pace, when you start to stretch its legs, the fork has the tendency to dive under hard braking and that upsets the balance of the bike.

What KTM did was swap out the mid-valve piston for one that’s designed to hold the front-end higher in the stroke. This is more important than you might think because it maintains the front-to-rear balance critical when cornering and braking. Don’t think the firmer valving took away the plush feel we love about the Xplor as KTM addressed this by using a softer spring rate. It’s a win-win. The shock spring rate is unchanged but KTM adjusted the damping to match the changes to the front.

The fork update improved every bike in Kato’s enduro range but the 450 EXC-F is one that benefitted majorly. The 450 EXC-F and its bigger brother had a lot to gain because they suffered the most. Now charging hard into corners and leaning on the front brake doesn’t upset the front-to-rear balance of the 450 EXC-F nearly as much as last year’s model.

Cornering feels more intuitive and smoother and braking is more effective. Ruts especially highlight the improved fork. The 450 EXC-F is now easier to steer into a rut and, once you lock in, the front wheel doesn’t want to climb out and run wide. 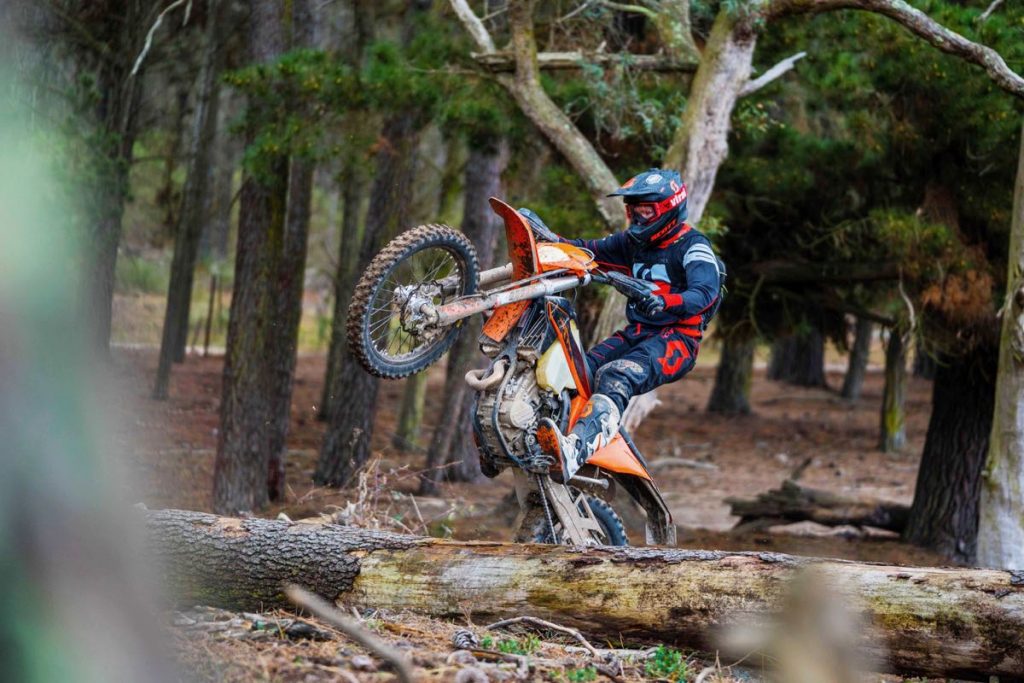 The adjustments to the shock were not only to match the fork characteristics. KTM was searching for more rear-wheel traction and they nailed the brief. Even on the stock FIM-approved tyres, the 450F will crawl through slick terrain without the wheelspin you might expect from a bike with so much torque. It ain’t a 300T with a gummy tyre but then it’s not bad either. They achieved this by going softer on the low-speed damping and firmer on the high-speed. KTM went down this path because it wanted to tune the bike for extreme terrain, like that found in the WESS Enduro World Championship.

I’m not going to try and convince you the 450 is as nimble as the 350 because it’s not, but the difference isn’t huge for the power advantage you get. The leap from the 450 to the 500, although small on paper, makes for a different handling machine. The 450 EXC-F feels lighter and easier to steer and that comes down to engine inertia.

The 500 EXC-F is really a 510 and KTM achieved this with a stroke of 72mm versus the 450’s 63.4mm. They share the same bore but that difference in stroke gives the 450 engine a more snappy, responsive feel and nimbler handling. It’s quicker to rev, easier to brake and doesn’t carry as much momentum or try to sit up.

Rod Nowak rode a KTM 450 EXC-F at Romaniacs and although that sounds crazy, he’s a big bloke and the 450 EXC-F can do slow, gnarly terrain. You can crawl it through creek beds but when you get to a steep hillclimb you’ll be glad you’ve got the extra kilowatts to get you to the summit in one gear.

The engine is smooth as silk and packs more than enough punch for mere mortals. Somehow KTM managed to trim 500g from the 450 EXC-F cylinder head. It’s more compact and 15mm lower.

The piston is also new and the compression ratio is increased from 11.7:1 to 12.75:1, adding to the engine’s responsive feel.

Although the 450 has strong, responsive power it’s not intimidating because you can effectively de-tune it by riding in a taller gear. It has the torque to pull third in situations where second would be a better choice and short-shifting will keep you away from its strong top-end. It dominates long hillclimbs with strong, effortless power and there’s always a little in reserve from lifting the front over logs or rocks, even when you think it has nothing left to give.

It’s a bike that suits more riders than you might think, it just comes down to how you ride it. The only niggle is the low-speed flameouts, which can be removed with a good tune. In my launch report for the 2020 KTM range, I said that if picking between a 500 and 450 I’d take the 500. After spending more time on the 450 I’m not so sure anymore.

The 450 has more power than most trailriders, like myself, will ever need but it’s nice to have some horses in reserve when you need them. It’s a fun engine to ride with because it’s revvier than it’s bigger brother but you don’t have to be on the boil as much as you do with the 350. The $14,495 450 EXC-F really does strike a good balance between handling and brute power.