Before CV-19 and social distancing, we took our little nippers to a dusty private motocross track in Mandalong, NSW, to let them loose on the KTM 65 SX Husqvarna TC 65 and Yamaha YZ65.

It seems the further we get down the capacity ladder the fewer brands we have to test, and some don’t even want us to do it. Once upon a time, the then-60cc class was dominated by Japanese manufacturers who all had a red-hot go at building bikes to dominate the class.

As the years went by they all started to drop off, leaving Kawasaki to dominate the category for years with the KX60. Compared to the current weapons getting around, that KX was a pretty simple bike with no power valve, only basic suspension and drum brakes but that didn’t stop kids from pushing KX60s to their limits and honing their skills ready for the 80cc class.

These days the KX60 is gone, replaced by the KX65, which has had to cope with an Austrian invasion. The KX has been a great bike but, compared to the development being poured into the KTM and Husqvarna 65s, the KX has become a bike for beginners and junior trailriders.

It hasn’t been until the last few years that we have seen Yamaha getting interested in the class again by coming out with the YZ65. I’m sure you can understand our excitement at this development, as testing a TC65 against a KTM 65 SX just seems downright pointless.

Now, with four major brands in the class, technically three entirely different bikes, we could have a decent comparo and give you guys the good, the bad and the ugly of each brand so you could make an educated choice on which bike Santa should bring little Johnny, sorry Declan.

Unfortunately, while we desperately wanted the KX65 to be a part of this test, Kawasaki couldn’t get us a bike. So we were left with just the KTM, Husqvarna and Yamaha. Yes, there are other brands in the class, such as the trick Cobra CX65, but getting our hands on one of those for a test can be difficult as they are much rarer in Australia than in other parts of the world.

Before CV-19 and social distancing, we took our little nippers to a dusty private motocross track in Mandalong, NSW, to let them loose and get their opinions on each bike so we could give you guys the scoop on what’s hot. 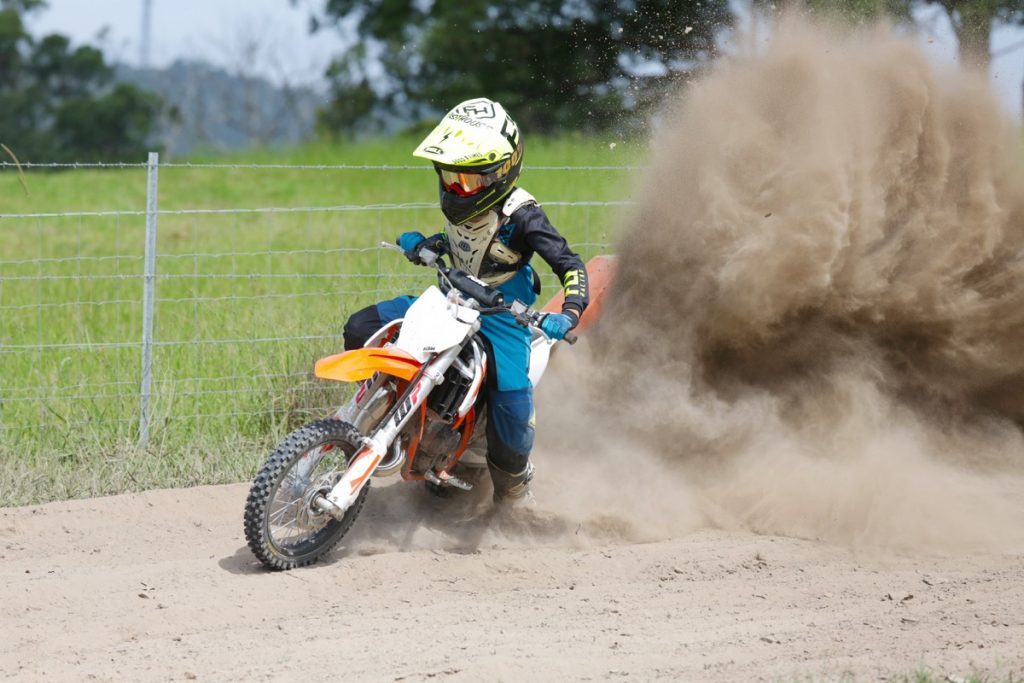 The KTM 65 SX has won so many titles that it’s got to a point where there is little I can say that you haven’t probably heard before, bit like a Donald Trump speech. What I really like about the KTM 65 SXis its performance.

Kato has pushed this bike to the edge to make it a winner, but it can be a little high-maintenance. The Formula brakes are temperamental and often need rebuilding or bleeding. It can be the pistons in the calipers getting stuck or the seals in the master cylinders leaking.

When they’re in peak condition, the brakes work fine, but anyone who has raced one of these bikes for some time will have a fair collection of spare brake parts and scrap metal. 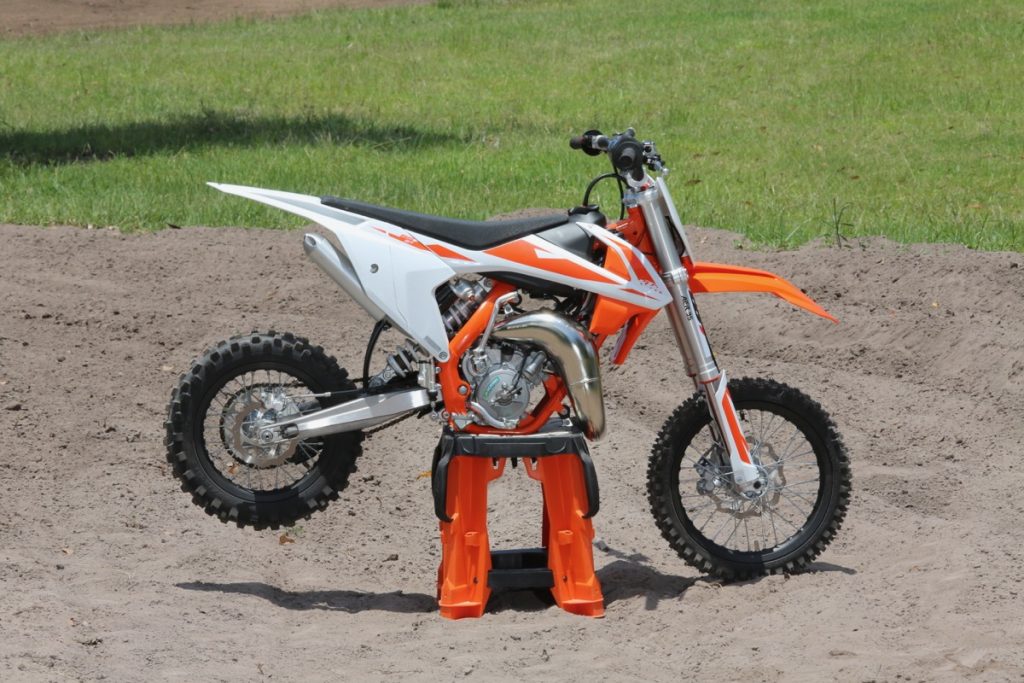 The hydraulic clutch operates very smoothly, which all our test riders seemed to like. Earlier KTM 65s were notorious for burning clutchplates but the current one seems to be much more durable. The crankshafts and gearboxes are strong and work well.

Again the earlier KTMs had a reputation for wearing out cranks but KTM has fixed the problem and made the bottom-end much more reliable. The top-end produces plenty of power but the piston ring tends to wear out quickly if the rider is at an advanced level and riding the bike hard. In fact, most top-level mini racers will need to freshen up the top-end every 10 hours or the piston ring will wear to a point where the bike will have no compression and won’t start.

The suspension features adjustable units from WP. The shock works well but the fork lacks damping. The front runs air so you can add more to stiffen it up but the rebound damping is minimal and the adjuster makes little difference. The fork will work fine for a beginner but most advanced riders are having inserts fitted with better damping and wider adjustment.

Parents seem to think the orange bike is going to be the best from the word go, thanks to the perception at the track that you need a Kato to win. While I don’t agree totally with this, KTM has done so well in the mini market that I think it will take a long time and a lot of persistence from other brands to turn the tide.

Our test crew said very little negative about the SX. It’s a bike they are all familiar with and have honed their skills on. They all mentioned that the power was impressive and all raved about the clutch.

Nobody said much about the brakes, which didn’t surprise me because the brakes are great when they are new. The smaller riders liked the softer suspension and there wasn’t many complaints about the fork, apart from one rider who said he found it too soft. 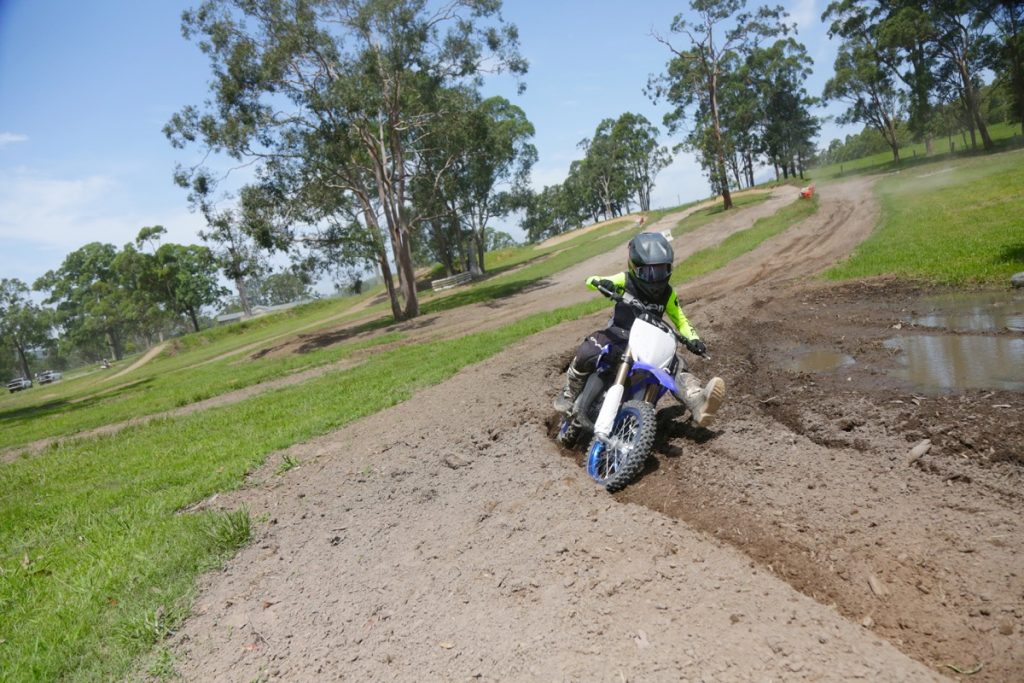 The YZ65 has blasted back onto the scene and been competitive right from the get go. Occasionally we see teething problems with new models but not with the little YZ. Yamaha is known for its reliability so we should have expected the 65 to be no different.

What I like about it is the quality of the parts, some of which come down from the YZ85. The Nissin brakes are not temperamental, they are good quality and require little maintenance.

The KYB suspension features quality components and is fully adjustable. In this case, the adjusters actually make a big difference with just a few clicks. The clutch got a bad rap from the kids for being cable-operated, as most of them are used to the light feel of the Formula hydraulic clutch on the Euro bikes.

While the softies complain about the cable, the reliability of the clutch itself is high and the rest of the engine is just as good. Pistons seem to last a long time and so do crankshafts.

I’ve changed plenty of pistons in YZ65s and am yet to see one on the point of failing, which is a massive bonus for a small engine that gets revved so hard. The mechanical power valves are strong and only need cleaning when the piston is changed. They work well and I am yet to see one fail.

Overall the YZ65 has strong power, good suspension and comes in a strong, reliable package, as we’d expect from a company such as Yamaha. 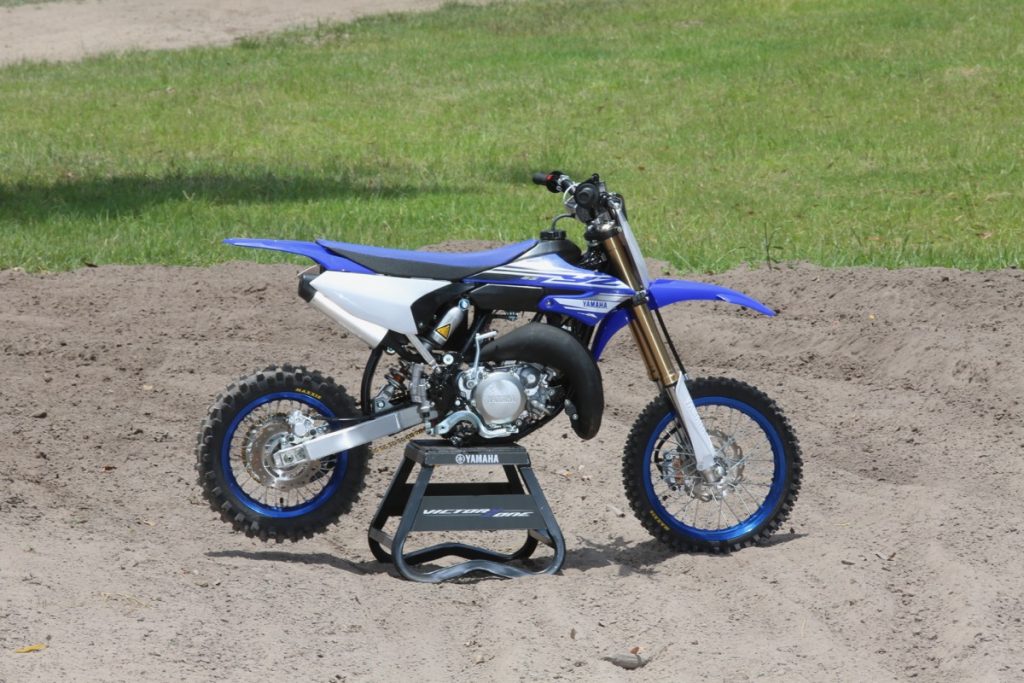 The parents were all eager to hear what their kids thought of the Yamaha and, to my surprise, the feedback was mostly positive. It has entirely different ergos from the Husky and KTM, so I was expecting it to cop some flack for that but the kids all agreed that the engine was fast. They all said the suspension was stiffer than the other two bikes, which are soft in the front. Some preferred that firm ride but the smaller riders thought it was too hard.

They also mentioned that the YZ felt wider and bigger but that the brakes worked well. What I noticed was that some of the riders struggled with the stock gearing for a while. 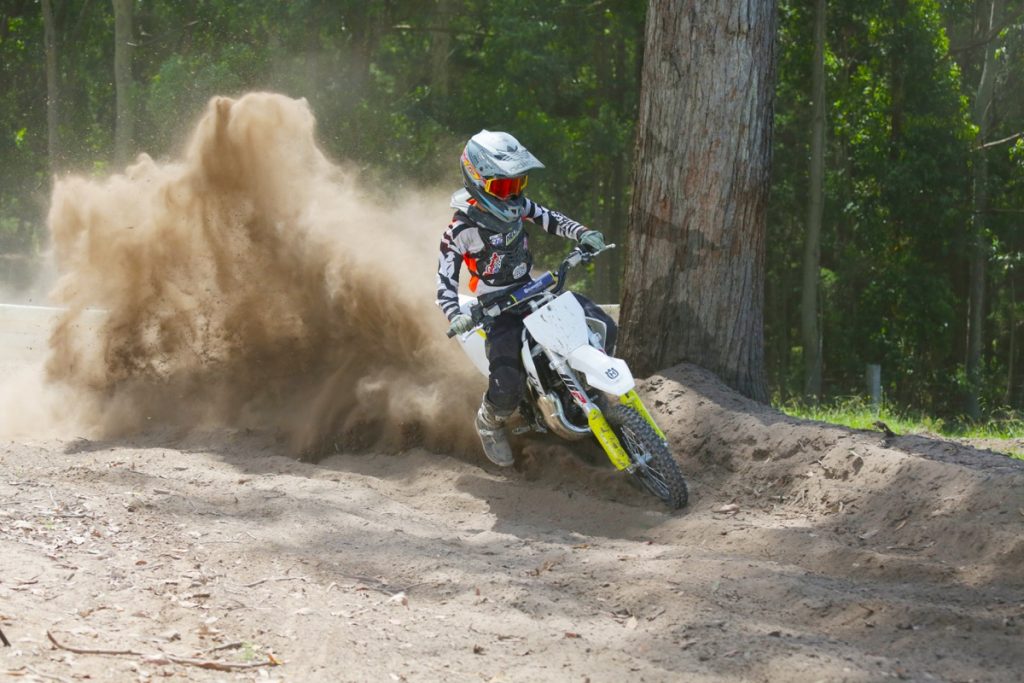 The rumours are true, the TC65 is essentially the same as the KTM 65 SX, and has the same RRP, but with different plastics. If you wait long enough there’ll probably be a red (GasGas) version as well. The different plastics produce different ergos, so while the power and suspension feel the same, the bike is somewhat different to ride.

It basically comes down to which one you like the look of, which dealer will give you the best price and whether you’ve got a decent shop handy. Performance wise they have the same engine so they both make loads of power. They both having durable crankshafts, gearboxes and clutches but, just like the SX, if ridden by a hard charger the TC will need to be fed pistons. The power valves on the TC and the SX are operated by pressure from the exhaust. This is a simple but effective way to do it. The problem with the vacuum operation is that the diaphragm can get damaged and stop the power valve from working correctly. 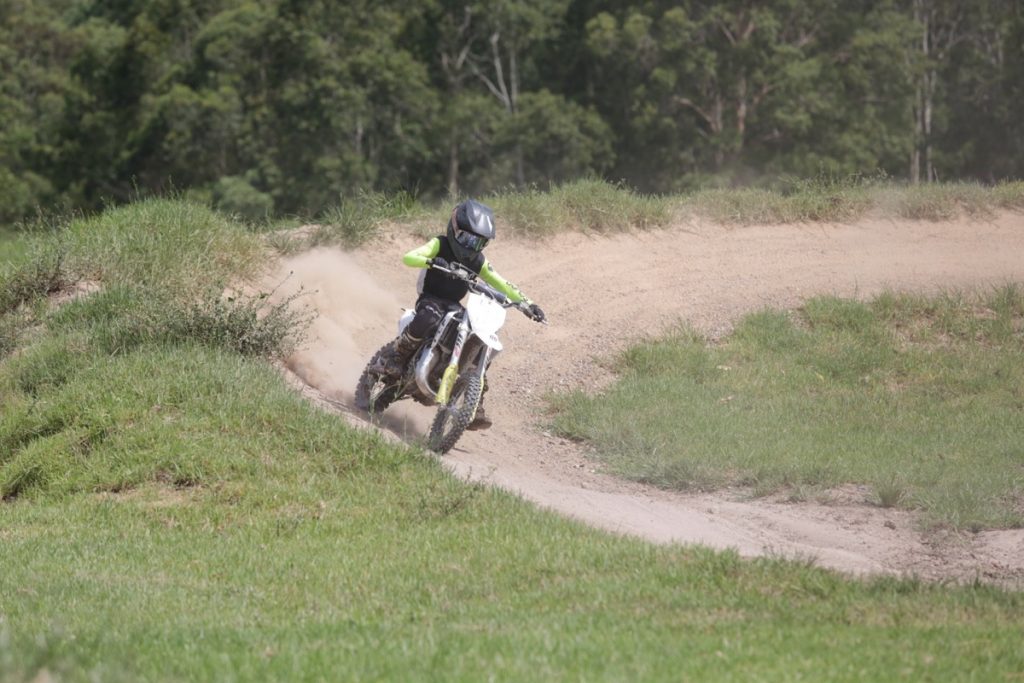 However I have seen more power valves get damaged from poor installation than in operation. The shaft of the power valve can break, in which case the valve fails to open, reducing top-end power.

As I expected, the riders all liked the power of the TC and liked the way it handled. As with the KTM 65 SX, all the riders were impressed by the clutch. The defining factor was whether they liked the feel of the TC over the SX. While some riders actually liked the shape and the ergos of the KTM 65 SX better, some couldn’t decide and thought they were both good.

Fletcher Kilpatrick: I really liked the power of the Husky and the clutch.

Riley Burgess: I really liked the Husky. I liked the handling and the power.

Koby Leach: The Husky has the same power and handling as the KTM but they do feel a bit different.

Fletcher Kilpatrick: I thought the [cable] clutch on the YZ felt a little weird and it felt the widest to ride.

Riley Burgess: The throttle on the YZ was really light but I wasn’t a big fan of the cable clutch.

Koby Leach: The suspension on the YZ felt the stiffest of the three to me.

Fletcher Kilpatrick: The KTM suspension felt good and it was easy to handle.

Riley Burgess: The KTM and Husky feel very much the same to ride but I did like the suspension.

Koby Leach: I really liked the power of the KTM and how it handled.

This isn’t a straight shootout, just a comparison. Given that our pocket testers struggled to pick between the two Austrians I’m not about to list the three bikes in order of preference.

I can give you some insight on how they stack up and so I will. We essentially have an orange/white option for which my best advice in choosing between the two is to see which dealer will give you the best price and best support and go with that one. The plastics do change the ergos slightly so be sure to sit your child on both bikes and see which one they feel the most comfortable on. Performance and reliability wise there really will be no difference between the Husky and the KTM. The big difference is between them and the YZ. The YZ has a powerful engine and has every bit as much power to be competitive. It’s already won races on an elite level all over the country.

It’s suspension I find easier to tune and I feel it needs less money spent on it to be raced at that elite. The YZ is not only very reliable but, in my opinion, the most reliable in the class. The only thing to look out for with the YZ is that smaller riders tend to find it heavier and the suspension too stiff. To be straight up real, if winning is your main goal then that can be done on any of these models and has been done many times in the past.

Unfortunately, Kawasaki was unable to get us the latest KX65 in time for this comparo so the riders missed out on giving it a spin in this fine company.