Honda’s most recent major overhaul of its 250 motocrosser, introduced at the start of 2018, produced a much-improved bike that regularly found itself in the top three in shootouts.

After some smart decisions by the R&D crew, which included scrapping the troublesome air fork in favour of a spring/cartridge unit and a much more aggressive chassis, Honda was well on its way back to the pointy end of the field.

The new, DOHC engine gave the Honda the much needed top-end power that the CRF250R had been missing but, in doing so, managed to sacrifice its traditional bottom-end torque. The 2019 model saw minor upgrades that managed to retrieve some bottom-end, but more was needed.

With plenty of changes on the 2020 CRF250 designed specifically to boost that bottom-end power (see breakout) we were keen to see if the latest red machine would tick all the boxes. For that, we headed out to the Mornington Peninsula Motorcycle Club track just out of Hastings, Victoria. 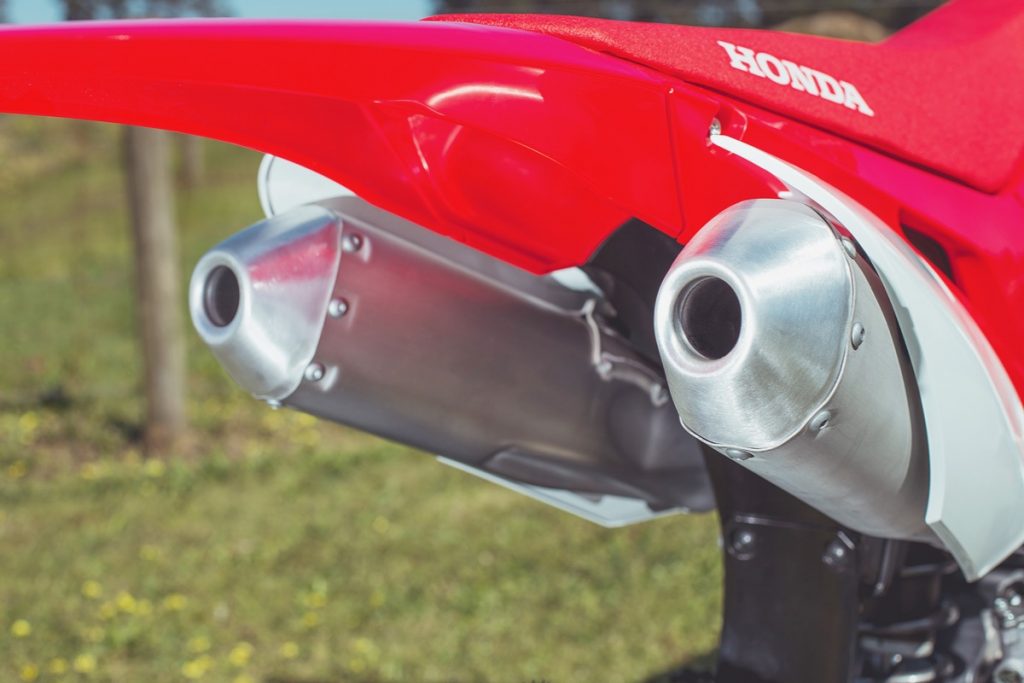 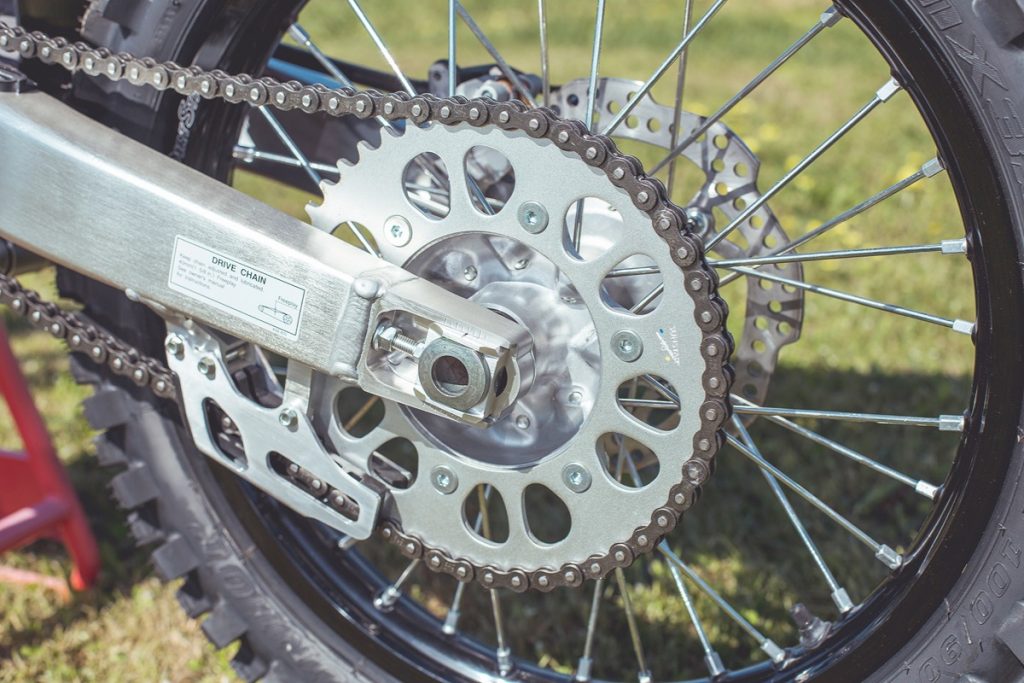 While this facility is usually prepped extremely well and watered to perfection on ride days, a last-minute change of track meant that our testing venue was extremely dry, hard-packed and slippery. The tricky conditions would put the tyres and our throttle control to the test.

FIRST LAPS
The first thing I noticed was a distinct change in the bottom-end power, right where it needed it most. The increase in bottom-end torque allowed me to ride a gear higher, particularly in those shiny, hardpack corners that had little traction.

I also noticed a slightly barkier note thanks to the removal of the header pipe resonator, which was quite cool. The next thing I noticed was an improvement in the overall handling. However, it wasn’t quite as easy to put my finger on just what was causing this. 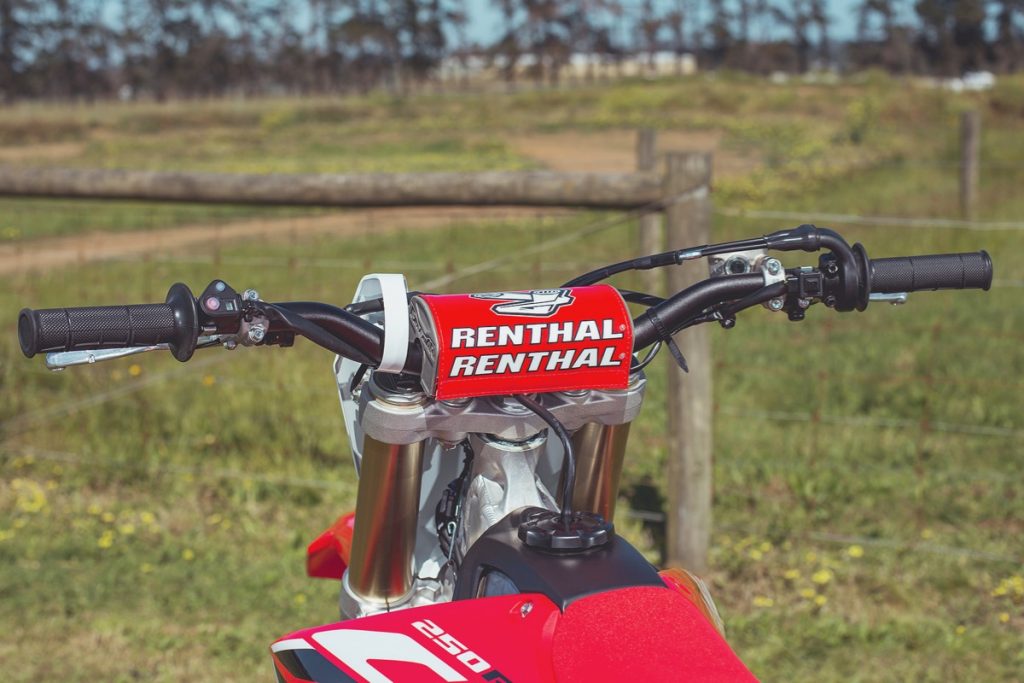 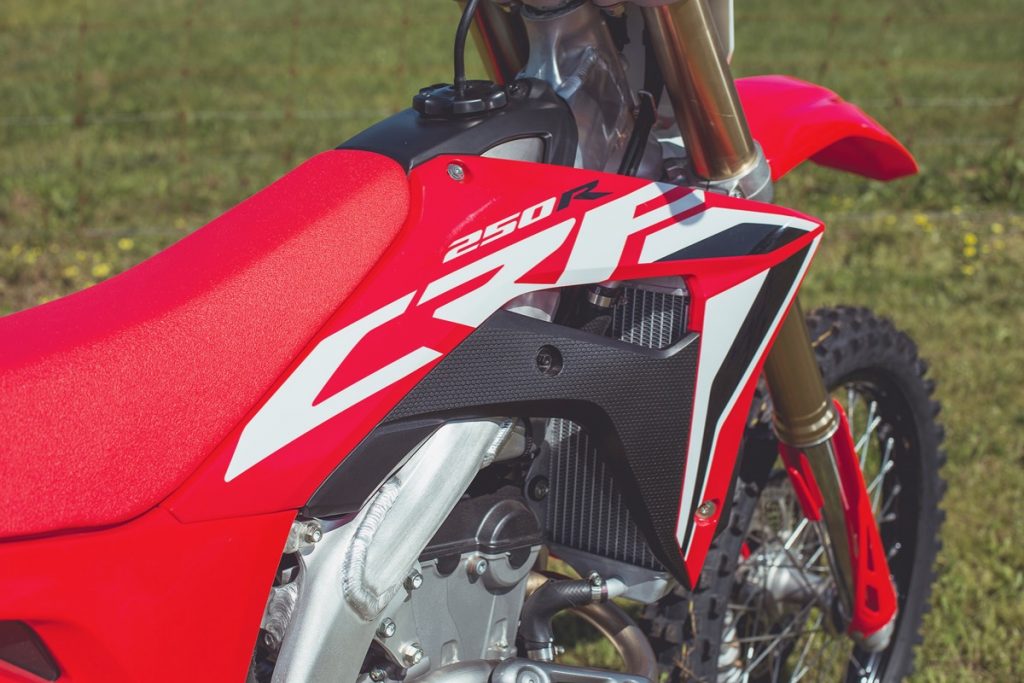 After a few solid sessions while playing with both the compression and rebound clickers on the fork and shock, I came to the realisation that it was the overall balance of the bike, combined with the lowered battery, that was making a big difference to how the bike was reacting to certain things on the track.

Let’s take a look at four main areas where we need a bike to perform:

1 ENGINE CHARACTERISTICS
For the last two years the latest generation Honda has put out decent numbers in the horsepower department. In fact, the peak power has been up there with the best.

But the lack of bottom-end on the 2018 (which was only marginally improved on the MY19) was a sore point with most riders. The changes made to the MY20 have hugely improved the only weak spot on the engine. 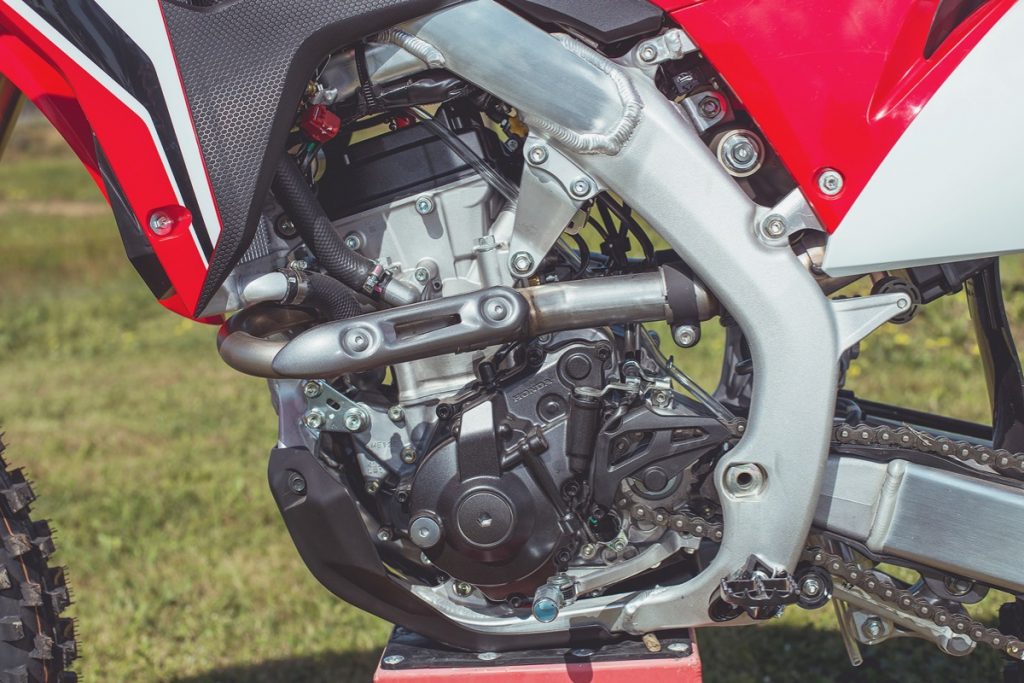 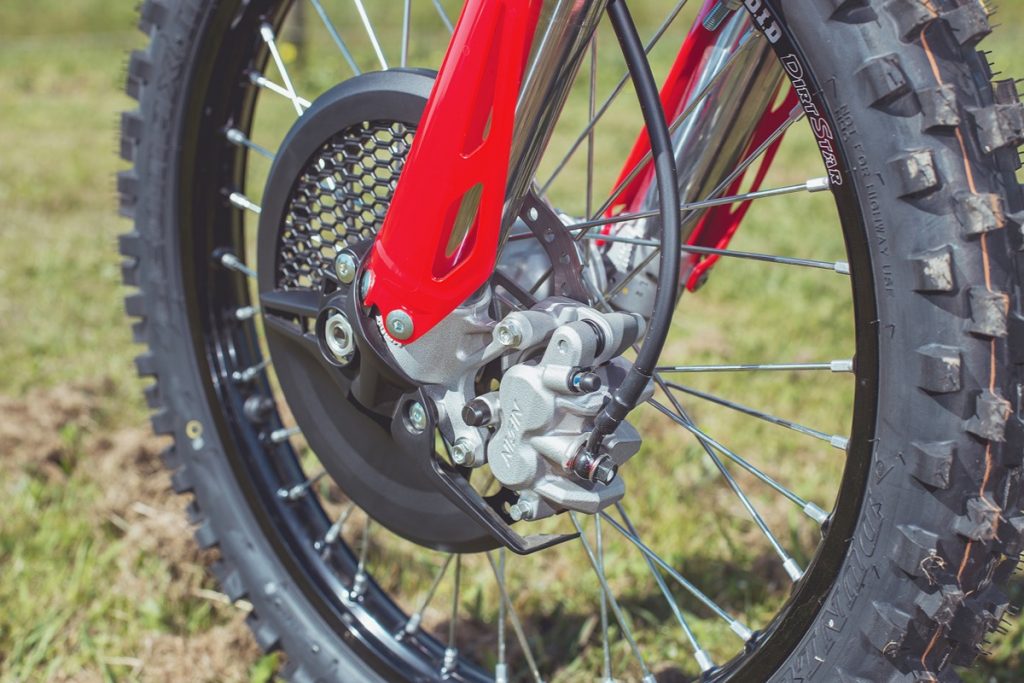 The improvement has come mainly from the new exhaust camshaft profile but the larger air filter, allowing the bike to breath more efficiently, and changes to the combustion chamber would be making their own contributions.

What you end up with is a very strong engine that starts pulling early in the rev range and keeps building into a very strong mid-range punch before firing into the top-end over-rev. You can either rev this bike to the moon, or lug it around in a taller gear. Overall it is one of the smoothest and easiest to ride 250Fs ever made while still having enough horsepower to holeshot races.

In recent years Honda has had some slight issues with the overall balance of the bike, particularly while braking hard into choppy corners, or accelerating hard out of curves. In 2018, soft damping in the shock made the bike squat too much exiting corners. For 2019, Honda fixed this by firming up the valving and solved the big problem exiting corners.

But in doing so, it managed to make the fork a tad soft, which meant that entering corners under hard brakes you’d have some diving, with a bit of deflection on choppy bumps. For MY20, Honda has finally hit the nail on the head in the balance department.

There is no major diving under brakes and the rear-end holds up exceptionally well under hard acceleration when exiting turns. Not only is this good for lap times, but it also saves you a heck of a lot of energy on the track. 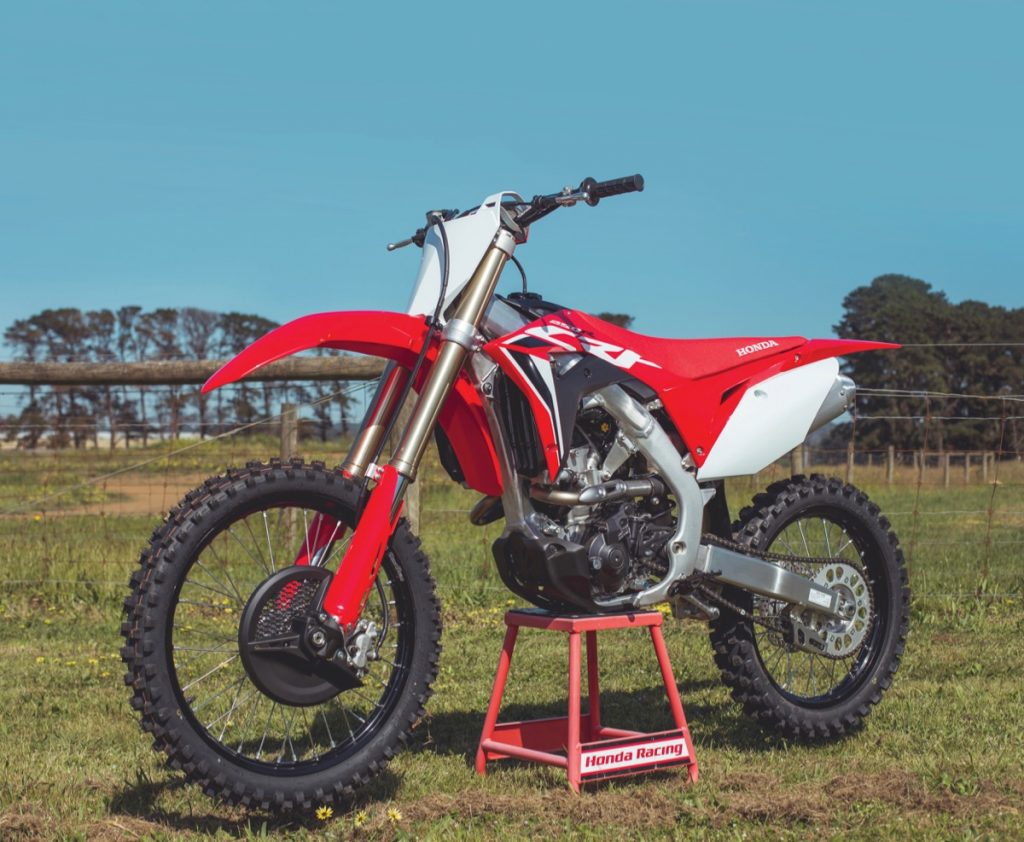 The bike reacts the way you want it to and doesn’t have any nasty surprises. In the chassis, the CRF250R navigates that really fine line between being rigid enough to hold a line well (no matter where you place it on the track) while also being plush enough to give the rider a comfortable feeling without being beaten up.

3 STARTS
Jumping out of the gate is incredibly important whether you’re racing clubbies or national events. The HRC launch control allows you to jump out of the gate exceptionally well, even in the tackiest of conditions. The strong engine means you don’t need to have your revs quite as high as some of the other 250s on the market before punching the clutch and launching yourself forward out of the gate.

I found with my practice starts that the slightly higher second- gear ratio drastically improved my starts from the MY20. The gap between second and third gear isn’t quite as big, which means you don’t have to be ‘split-second’ perfect with your first gearchange out of the gate from second to third.

The shape of the bike when in the seated position allows you to get a really good grip on the machine when it comes time to launch out of the gate. It’s important with the Honda that you allow yourself enough freeplay in the clutch when doing your race starts.

A lot of people don’t run enough freeplay and, aside from massively reducing the clutch’s lifespan, it takes way too long before it engages and starts driving you forward. I recommend at least one to two centimetres of freeplay for starts. And don’t forget, you only need to slide your hand over the quick adjuster wheel to get rid of some of that freeplay if it increases too much during the race.

4 ERGONOMICS
The ergos on the Honda continue to be among the most comfortable in the class. In our ADB shootouts we regularly have comments about how comfortable it is and how easy it is to manoeuvre your way around the bike.

The seat has a nice flat profile when you’re sitting in the middle of the bike, but when you tuck in for a turn while sitting up near the petrol tank the seat profile is slightly rounded, allowing the rider to almost slot into position on all contact points.

The footpeg, handlebar and seat relationship fits most people well and only the tallest of riders will find themselves wanting to make slight adjustments.

The bike is wide enough to grip between your legs when standing but also slim enough to feel agile and light in the air. The gap between the gearshift and footpeg can become slightly cramped for anyone with a boot size larger than 11 but, other than that, it is hard to find a fault with the ergonomics.VERDICT

VERDICT
It’s only once you’ve really put the MY20 CRF250R through its paces against the 2019 that you start to notice how far removed the new model is from the old one. With decent improvements to the engine and power delivery (particularly bottom-end where it was most needed) and solid refinements to the handling we have got ourselves an impressive bike.

Unlike previous models, which have left as wanting more, the MY20 Honda CRF250R is a better overall package. It has improved its bottom-end power while ditching the air fork in 2018 has seen steady handling improvements. 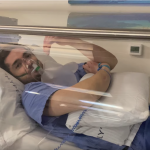 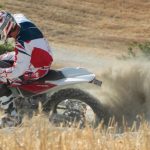 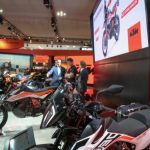 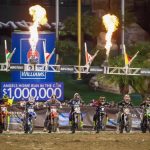 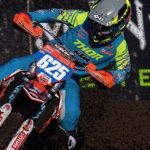