Wollongong’s third round of the 2019 Australian Supercross Championship proved to be a promising encounter for Empire Kawasaki, as a strong New South Wales crowd filled out WIN Stadium.

The triple crown format delivered unpredictable racing, although that didn’t stop KX450-mounted Dylan Long as he recorded a supremely consistent 7-8-7 scorecard for sixth overall. The popular Victorian is now ranked fifth in the SX1 championship standings.

“Round three wasn’t too bad again,” reflected Long. “My results were pretty consistent, but obviously I’m looking for more than that as the series goes on. I came away with sixth overall and sit fifth in the standings, so that’s a positive from tonight.”

Still not 100 per cent fit, Lawson Bopping benefited from the short, three-race format, notching up 9-7-10 race results. Earning eighth overall, the result marked a satisfying showing for the NSW rider, who now holds down 11th in the standings. 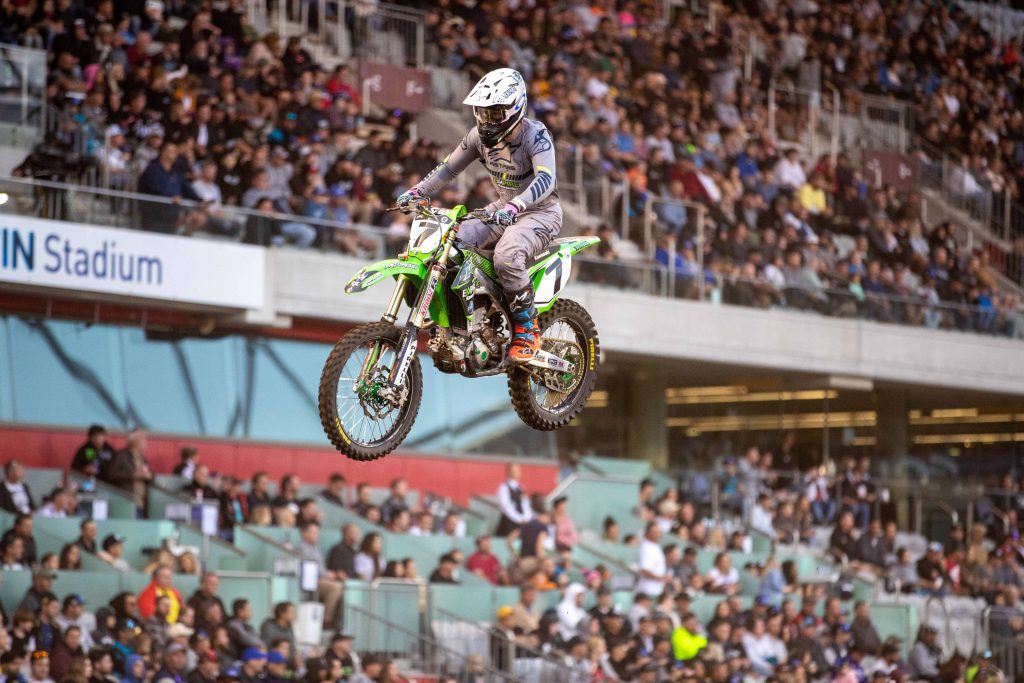 “It was quite a good night,” Bopping declared. “It was nothing spectacular and I actually got a flat tyre in my heat, so I had to go the LCQ, but I won that. For the finals, my results don’t seem great on paper, but it’s a lot better than the DNF I had at the last round. I didn’t have any crashes, and the track was easy to make mistakes on, so I’m glad I got out of there unscathed.”

In the SX2 class and equipped with the KX250, American rider Bradley Taft rode to an incredible second place finish in main event one, marking his first race podium of the season. Races two and three proved to be more difficult as he lodged 8-16 results for eighth overall, now ranked sixth in the SX2 championship.

“Tonight was okay for me,” Taft explained. “I was stoked to finish second in the first main and I was feeling really good, but unfortunately I had some mixed results in the last two – mostly because my starts. I’m looking forward to New Zealand next week and hopefully I can improve my overall result.”