Team HRC’s Tim Gajser had missed the podium for several rounds before last weekend and at Uddevalla he not only found the podium but did one better when he took the overall with 1-2 finishes. The reigning champion started race in the top 5 while his HRC teammate Evgeny Bobryshev took the Fox Holeshot.

Gajser and Bobryshev battled shortly but Gajser made it by the Russian along with Red Bull KTM Factory Racing’s Glenn Coldenhoff. Leading the GP that he won in the last visit Febvre made a mistake and fell out of the lead and remounting in 12th.

On lap 4 Bobryshev lost 3rd to Paulin and 5 laps later lost 4th to Herlings who had finally found a way around Desalle. Herlings and Paulin both passed Coldenhoff and then Bobryshev did the same. One lap later Herlings took over second from Paulin.

On the last lap a mistake dropped Bobryshev from 4th to 7th letting Coldenhoff back into the top five. At the finish Gajser beat out Herlings by over 9 seconds with Paulin 3rd then Desalle, Coldenhoff, and Febvre who worked his way back from 12th to finish 6th. 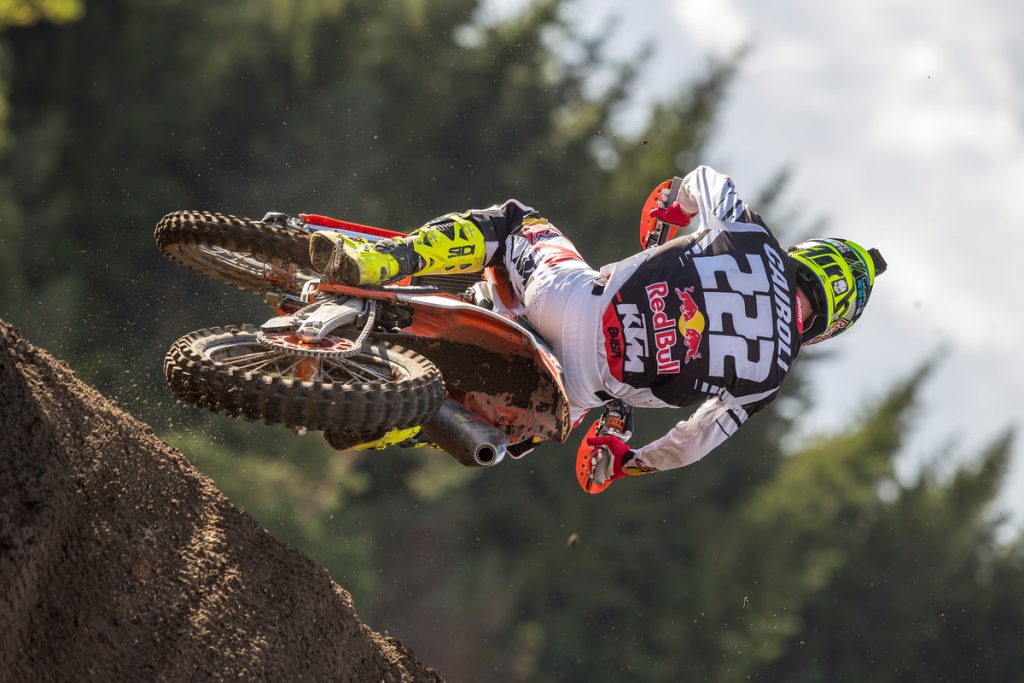 Race 2 started similar but with a Holeshot for Febvre just ahead of Herlings, Gajser, and Paulin. Gajser passed Herlings quickly but a few laps later a mistake of Gajser let the Dutchman through.

Herlings while charging toward the leader Febvre had a bike issue which immediately ended his race. Gajser retook 2nd position and set his sights on the #461. The Slovenian and the Frenchman battled for several laps coming extremely close at times.

Behind the front two was Paulin in a race of his own well ahead of Desalle and Coldenhoff. Cairoli struggled again in race 2 starting in 9th and only making his way to 7th by the finish. At the checkered flag Febvre won the race ahead of Gajser to secure second while the HRC rider took the overall win.

Romain Febvre in the press conference said: “I am really happy, it has been a tough season for me. We finally made a good step forward and we can start at the front. I finally got on the podium this weekend after I finished 4th I think three times so it is good.”

Tim Gajser’s win was his third this season but the first since Leon 12 rounds prior. Gajser in the press conference said: “It feels amazing to be back after quite a long time, we have been working really hard, we had some bad weekends and some bad races but we are now getting better and better. I am really happy, really glad and I just want to say thank to everyone.”

Gautier Paulin’s pair of thirds took third overall to which he said: “It is always good to be on the box, I made a few mistakes and the first race I had good start. I’m feeling 100% right now.”

Antonio Cairoli though finishing 7th overall gained points in the championship and in the post race press conference he said: “I’m really happy about the result, for sure today it could be better on the track which was very difficult with a lot of ruts but the competition is very high.” 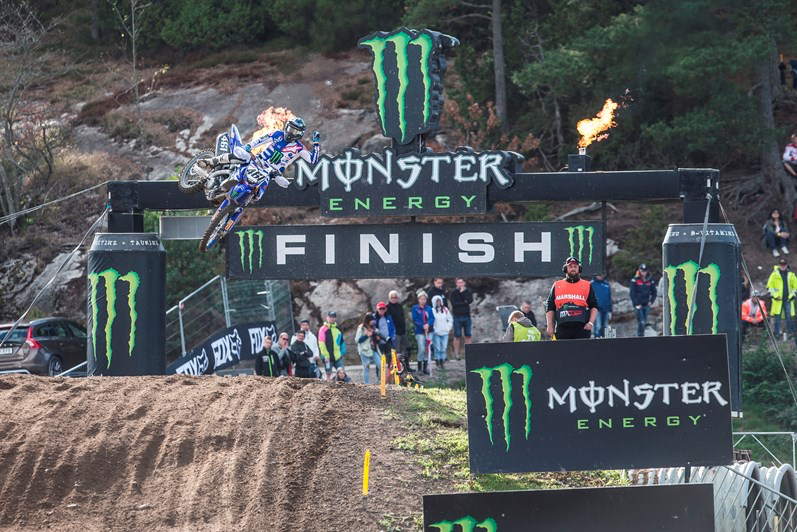 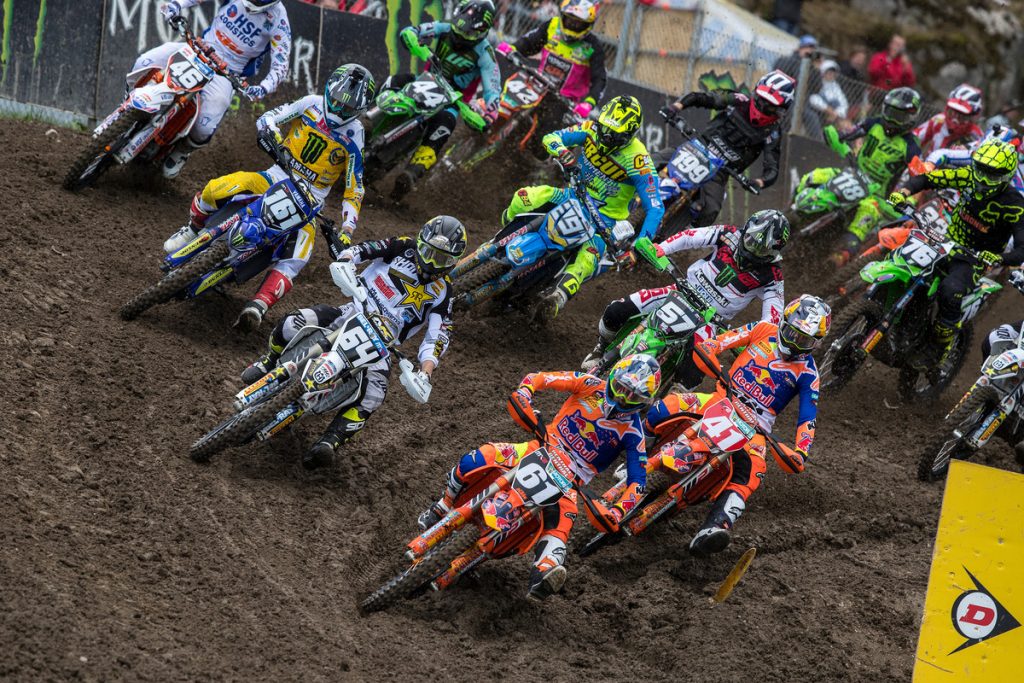 Team Suzuki World MX2’s Jeremy Seewer came into the MXGP of Sweden only one week after missing out on winning his home GP and while the competition was tough he managed to take the overall with 2-2 results.

The two title contenders Seewer and Red Bull KTM Factory Racing’s Pauls Jonass start 4th and 7th but by the end of the first lap where in 3rd and 5th respectively. Behind Seewer and in front of Jonass was Rockstar Energy Husqvarna Factory Racing’s Conrad Mewse. Mewse managed to hold off the points leader for the first laps before losing the position.

As Prado ran away with the lead Seewer pushed to reach Lieber but fell in a corner and he picked up just ahead of Jonass nearly being passed. Lieber then made a mistake, fell out of second, and remounted in 4th before making more errors and dropping to 13th. 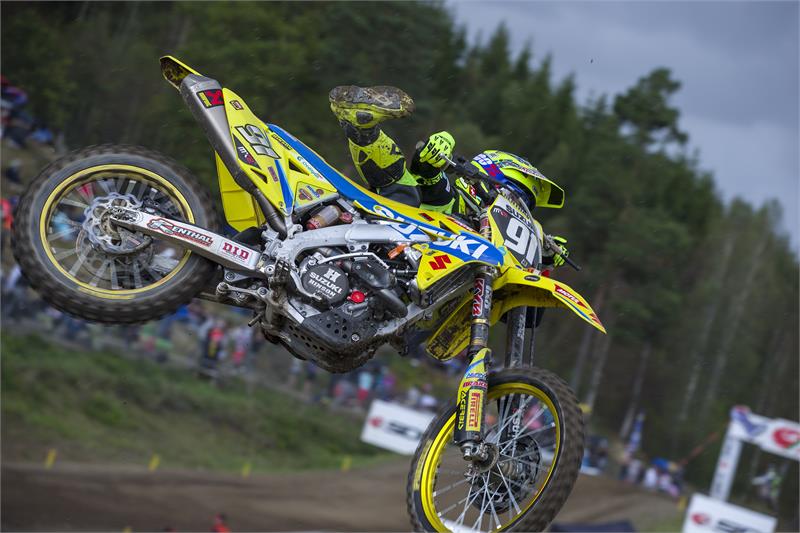 At the finish it was Prado winning by just under 2 seconds then Jonass 28 seconds back of the lead. Conrad Mewse held on to finish 4th and HSF Motorsport Team’s Brian Bogers took 5th.

Race 2 had an identical Fox holeshot taken by Prado, his 14th this season. Behind Prado was his teammate Jonass then Rockstar Energy Factory Racing’s Thomas Covington and Seewer. Covington passed Jonass on the open corner and when Jonass retaliated it slowed the pair enough to not only let Seewer by but also his Suzuki World MX2 teammate Hunter Lawrence.

Throughout it all Covington maintained his position ahead of Jonass and Seewer went after Prado. On lap 5 Seewer took over the lead and one lap later Lawrence and Covington passed Prado as well. The Spaniard was then left to fend off his teammate who made a quick and decisive move to take the spot away.

On the last lap Covington showed amazing speed and caught Seewer leaping past the Swiss rider into the last corner to end the race in a photo finish. Covington took the race win to the disappointment of Seewer. 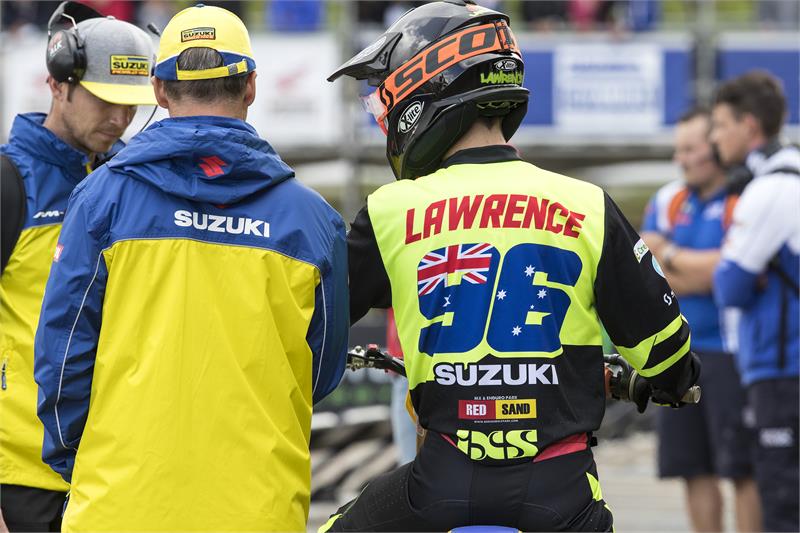 In the overall Seewer took the win, the 5th of his career and season. In the press conference Seewer said: “I am really happy to win a GP even if I got passed in the last corner in the second race. I am still happy to win the GP, I had so much fun riding on the bike this weekend and just enjoyed being out there racing.”

Jorge Prado took second after a hard fought 5th in race 2 for his 4th podium this season to which he said: “It was pretty good, in the first race I got the Fox Holeshot and I could lead the whole race so that was a perfect race and in the second race I struggled a bit more but anyway I came second overall so I’m pretty happy.”

Pauls Jonass scored valuable points but the gap has now dropped to 45 between him and Seewer. Jonass in the press conference said: “I still got pretty decent points this weekend again twice third and then again 3rd on the podium. I didn’t ride my best races but still 40 points is good for the championship and now I’m just looking forward to the next GP.”