Have to perform a U-turn on a steep downhill can be scary because you typically have to let your bike roll forward or accelerate, which can see the situation snowball out of control.

Instead of attempting a spin turn or pulling on the rear-end and hurting your back, attempt this stoppie turn to have you facing in the right direction and powering back up the hill.

1 GET OFF
If you’ve got the skills to stay on the bike for this trick, be my guest. But unless your name is Graham Jarvis you’re probably best getting off the bike. You can get off on either side, just remember the bike will spin to the opposite side of the one you’re standing on. The bike can be on or off but if the engine is on I would suggest doing this trick in neutral because there is less chance of a whiskey throttle down hill. 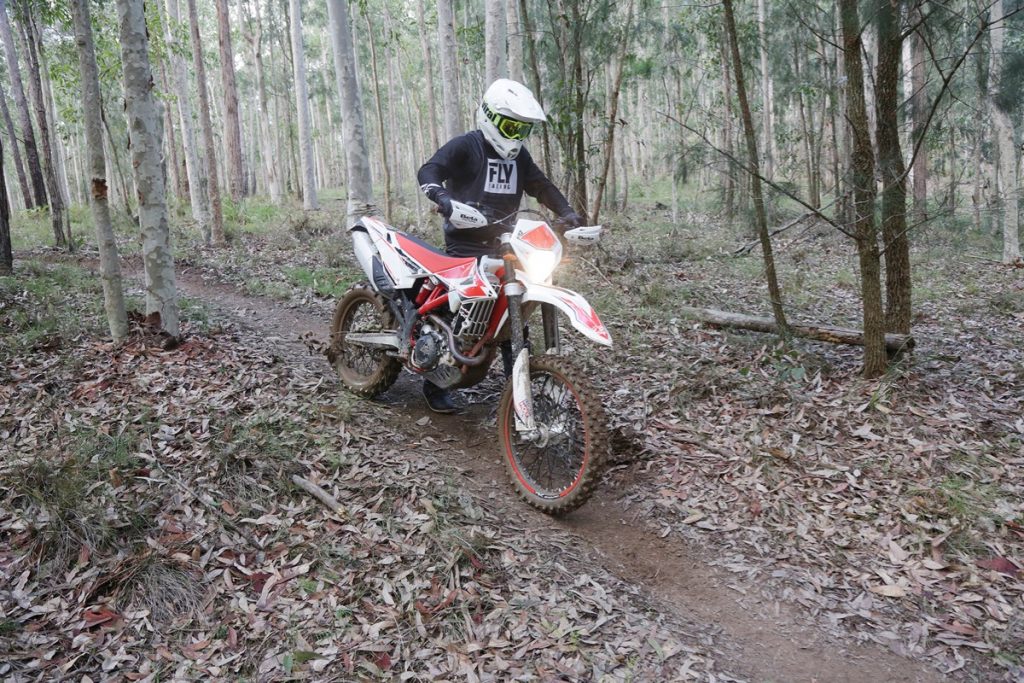 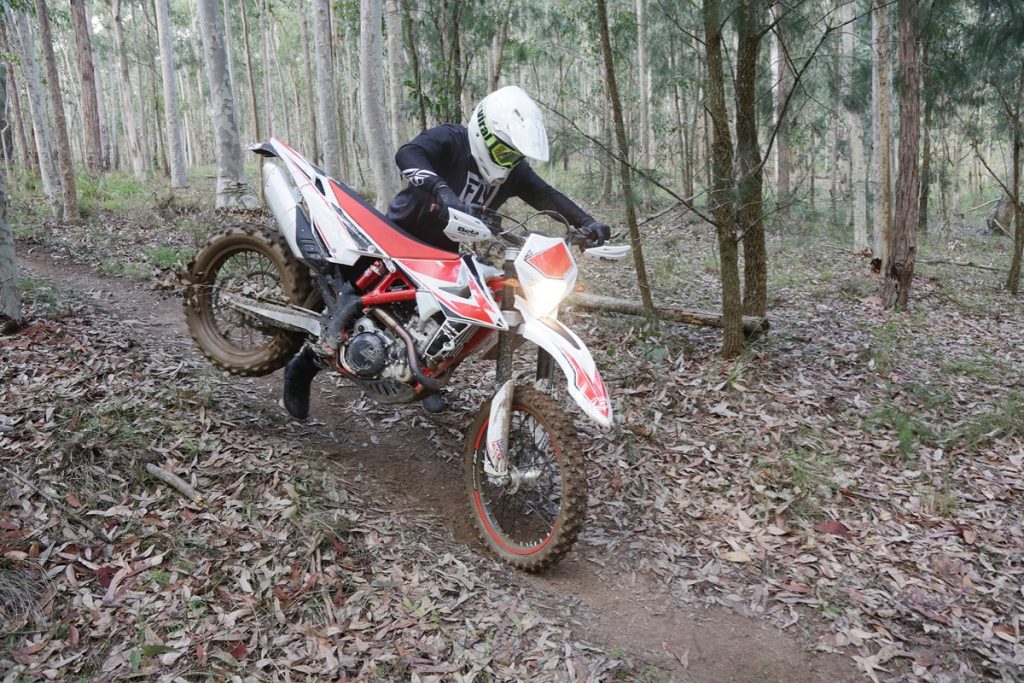 3 ROLL ON
When you’re setup off the bike and in control of it, begin rolling forward. You need to build enough speed to allow inertia to lift the rear wheel but you also don’t want the bike to cartwheel or the front wheel to skid out of control. The speed you need will depend on the gradient but, generally speaking, you need less than you think. 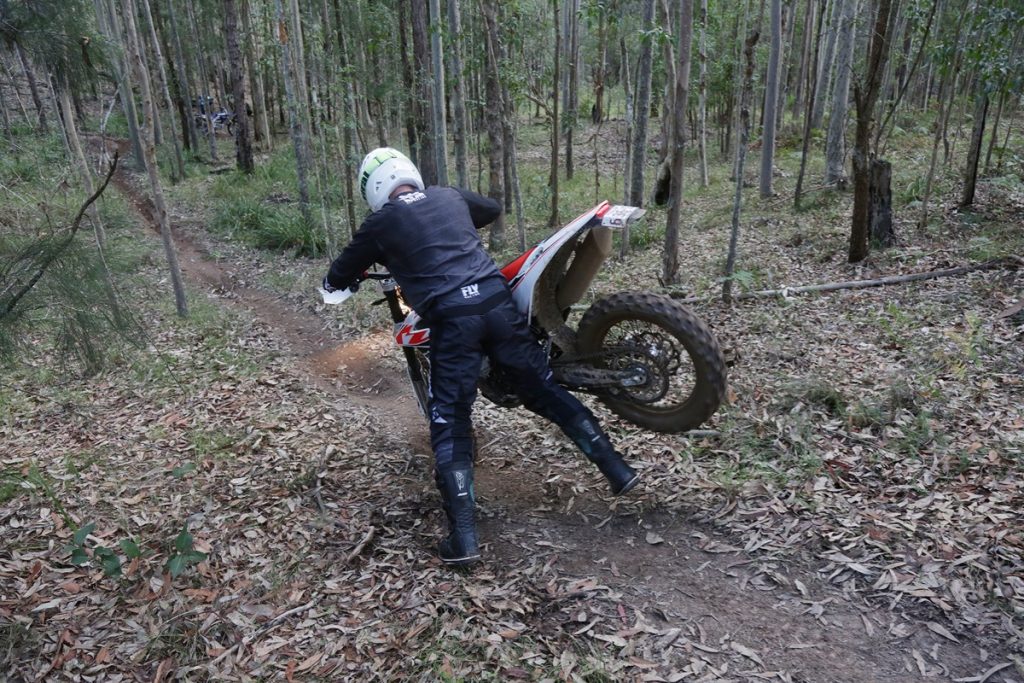 4 STOP IT
Once you’re confident the bike is rolling forward fast enough, slam the front brake on. The key is to brake aggressively, which will lift the rear-wheel at slower speeds. Once you feel the rear wheel begin to lift, gently nudge the bike away from you with your inside knee and hip. Keep the bike leaning slightly towards your body to prevent it from high-siding. 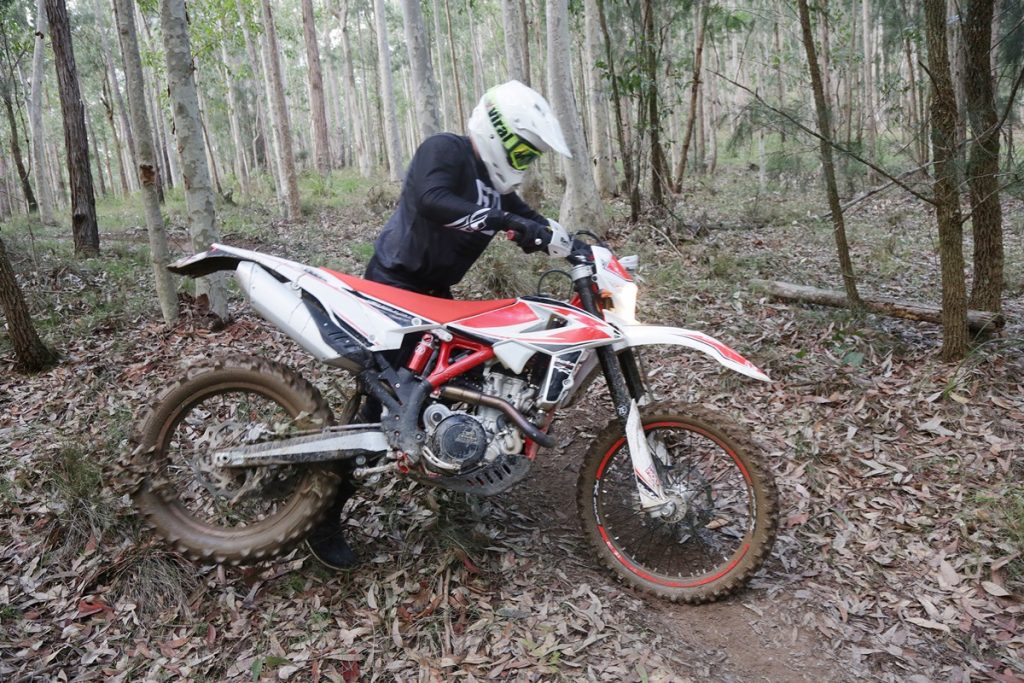 5 DROP IT
Once you feel the bike is at a right angle to the slope, just lean back and release the front brake ever so slightly. This will help the rear wheel to drop back to earth as the front wheel lurches forward. Once back on the ground you will be sideways to the hill which is often a good position to build momentum (rather than facing upwards) to climb back up. Editor Mitch Lees 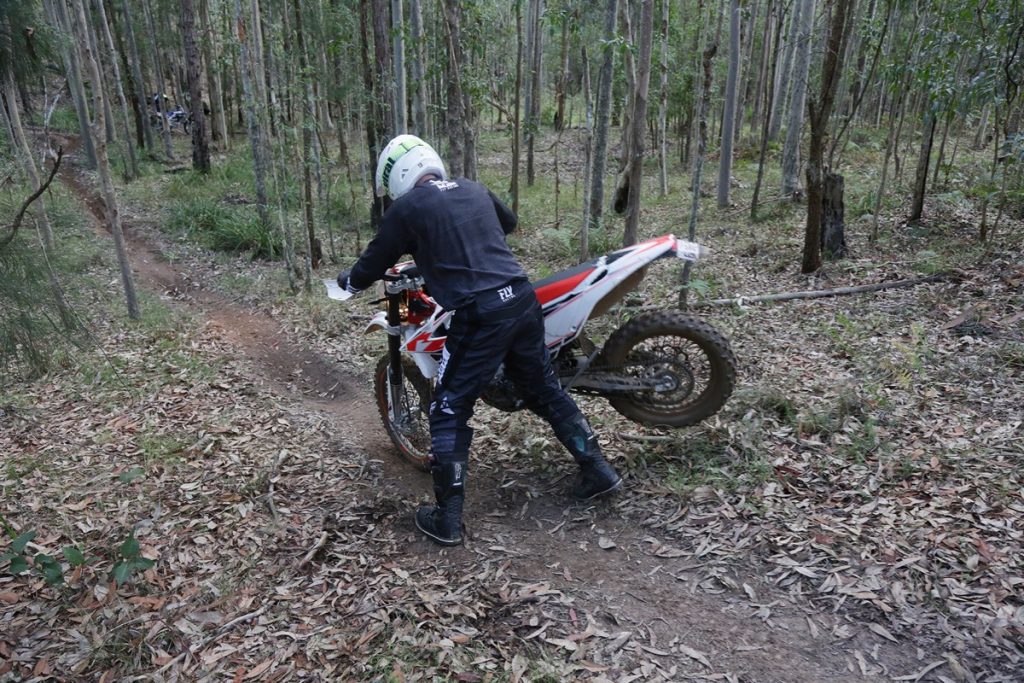 HEAVY LIFTING
If you’re nervous about performing a stoppie on a steep downhill then try performing this task with some muscle. For this variation you will need to be on the right side of the bike so you can hold onto the front brake while you spin the rear-end.
In doing it this way you will not need momentum, simply hold the front brake and grab the rear mudguard with your left hand, but be careful of the hot pipe!

SKILL SET:
Advanced. If you’re not confident you can control a stoppie or don’t have the strength to muscle the bike then avoid this trick.
GENRE:
Trailriding or hard enduro
PRACTICE:
Start with a slight downhill and build up to steep and rutted hills.
STRENGTH & HEIGHT:
Taller, stronger riders will find this trick easier but it isn’t impossible for small fries.
WIDOW POTENTIAL:
This trick won’t end in a trip to the hospital but it will put your bike in the repair shop if you get it wrong.
BRAGGING RIGHTS:
This trick looks cool and saves energy but it isn’t necessarily faster than lifting the bike by hand.