What is new on the 2019 Gas Gas EC300? Well, not a great deal really, but Gasser has put a lot of focus on refining the bikes and just cleaning up a few little things.

The 2018 Gas Gas EC300 was an almost-all-new bike and the first that the Spanish company had produced since being bought by the Grupo Torrot Electric group in 2016. Of course, Gas Gas has been around for a long time, since 1985 I believe, and there has been many different versions of the EC300, but the 2018 bike was by far the best 300 two-smoker that Gas Gas had produced. It was clear from the very beginning of our 300cc shootout last year (ADB #464), that the EC was there to shake up the ranks and it did just that by winning the shootout.

UPDATES
So, what is new on the 2019? Well, not a great deal really, but Gasser has put a lot of focus on refining the bikes and just cleaning up a few little things. Visually, there is the usual change in colours and graphics, such as changing the frame guards from black to red to match the frame, making the air filter cover fit better and putting a locking tab on it to stop it falling off. 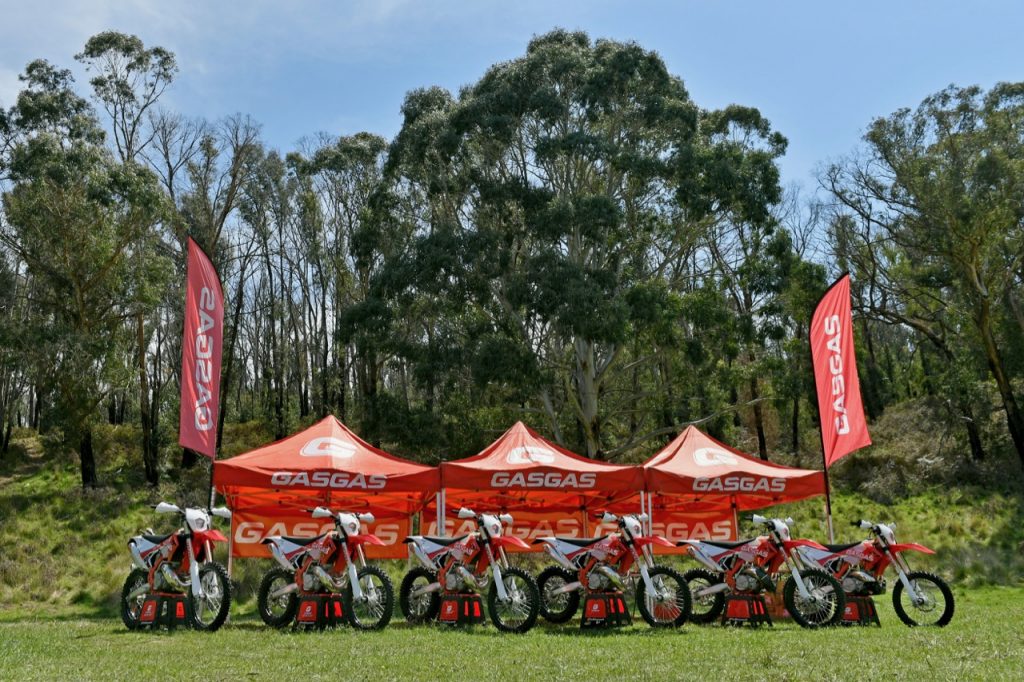 The Double Force tapered handlebar on the 2018 models has been replaced with a Neken item that has four mounting positions. Motor-wise, other than a redesigned cylinder head and new exhaust porting that is said to give a more linear, torquey power curve, the motor is the same as 2018.

Gas Gas has, however, made a bunch of changes to the electrical system and really cleaned up what felt like an old-school enduro setup. There’s a new, stronger starter motor with a dedicated start button and stop button and there is a new, bigger battery that cranks the bike over with ease.

It’s still advised to kickstart the bike when it’s cold but as soon as the engine is warm, the electric leg works perfectly. So until Torrot fronts with the cash to put the starter underneath, like the rest of the Euros, this will do.

There’s now an on-the-fly sun/rain map switch on the handlebar and that came in handy changing between the slippery hills and the loamy singletrack at our test venue. And, thankfully the old-school choke lever has been removed. 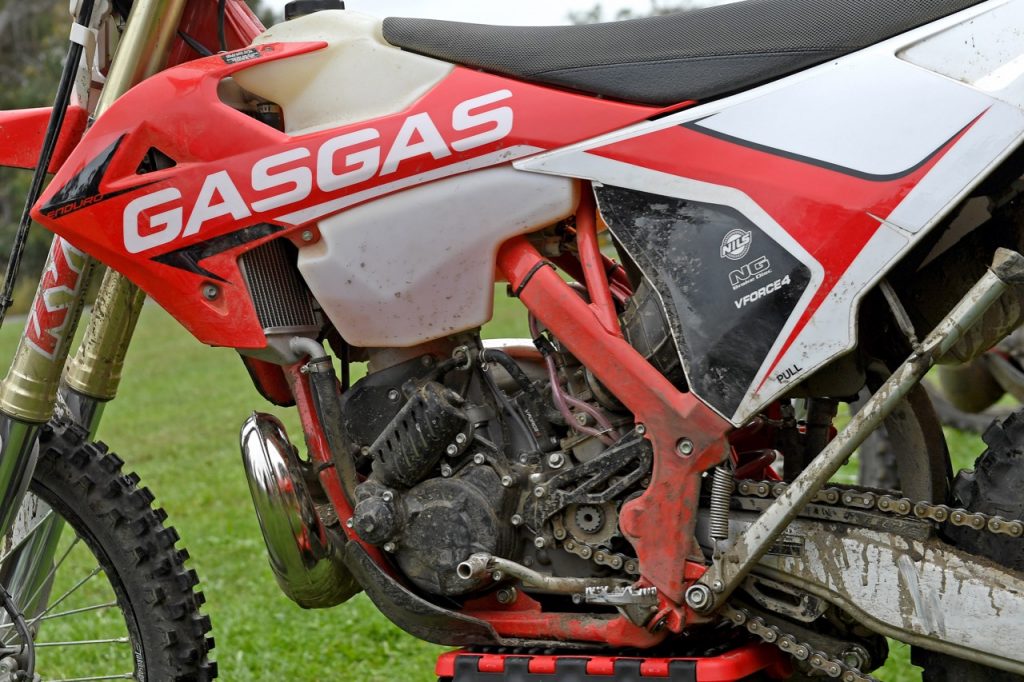 The KYB suspension that replaced Marzocchi last year is unchanged but that is no big deal because the settings on the 2018 bikes were pretty solid. The FMF muffler is a nice touch and the standard pipe looks very similar to an FMF Gnarly but there is no branding on it.

ON THE TRACK
I was eager to get back on the EC300 as it was my favourite 300cc enduro bike of 2018. I liked the power and I really liked the suspension so I was keen to see if the refinements the Spanish R&D team had made were a step in the right direction.

Last time, we felt the bikes were jetted a tad lean for our test area and that was probably why the bottom-end was so snappy. For 2019, the jetting in the Keihen PWK38 carb is richer and, combined with the new head, the power delivery was much easier on the rider and therefore was a nicer ride.

The snap that the 2018 bikes had seems to have been mellowed out and the engine now feels smoother and torquier than before. There is still a nice strong mid-range, though, and you can pretty well cruise in third gear just about anywhere around the track. It still does lack a bit up top but unless you’re a fire-road bandit, you’ll be happy with the bottom and mid. 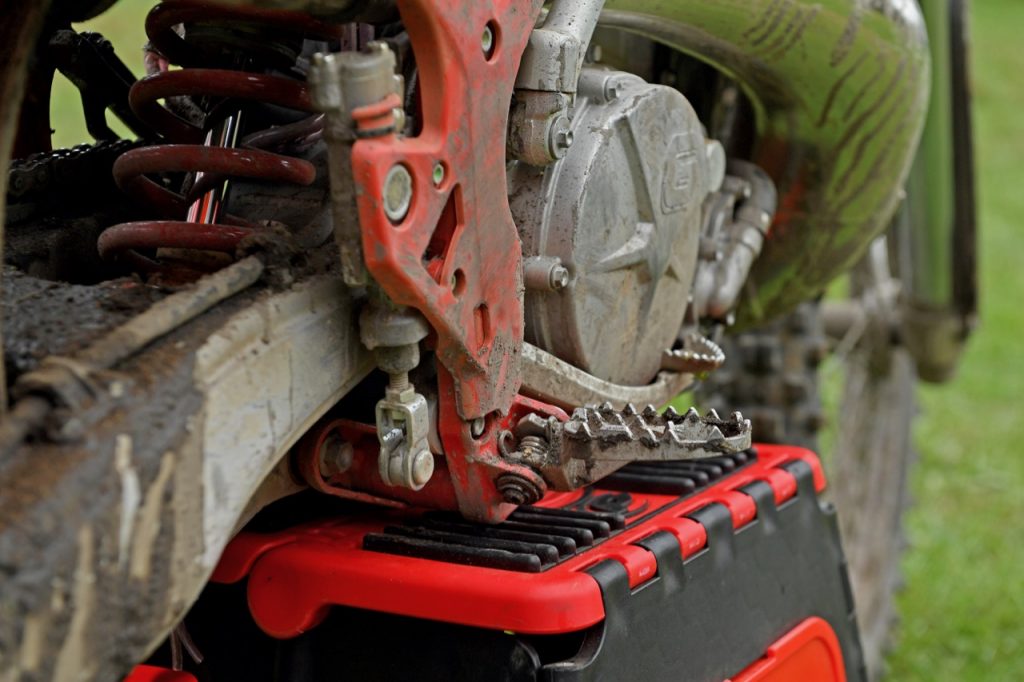 The clear standout on these bikes for me is the KYB suspension. It is probably one of the best stock enduro bike suspension packages that you can buy. It’s firm, it’s predictable and for someone like myself who likes to move along the trail at pace and also hit logs and jumps, it’s great. It doesn’t bottom out on the big hits, yet it’s quite plush and I feel really safe on this bike.

It may be a tad firm for lighter riders, but it still seems to be a nice ride that won’t beat you up. Last year, the KYB suspension sealed the deal for the 300cc enduro title and the 2019 stuff is just as good. If only the Nissin front brake was a little stronger to accommodate the extra confidence the fork gives you.

I feel like all the refinements that Gas Gas has made to the EC300 have brought it back to where it needs to be in the ergo department. The clunky old controls and old-school handlebar and ’bar pad have been ditched and the Neken ’bar is a nice bend and offers good feedback to the rider.

The dual-map switch works a treat, although I prefer the bike on the sun map just because the power delivery is torquier and you can crawl the bike up a nasty, rocky hill with little effort. It did take me a little while to get used to having the starter button on the left but that’s me just being picky.

The EC300 has a host of quality parts too with the FMF muffler, V-Force 4 reed block, reliable Keihen PWK38 carb, Magura hydraulic clutch, billet two-position triple-clamps, bashplate, a 9.8 litre tank and more. And at $12,490, the Gas Gas EC300 is only $100-200 more than the Sherco and Beta but still over $2000 less than the KTM or Husky with TPI fuel injection. 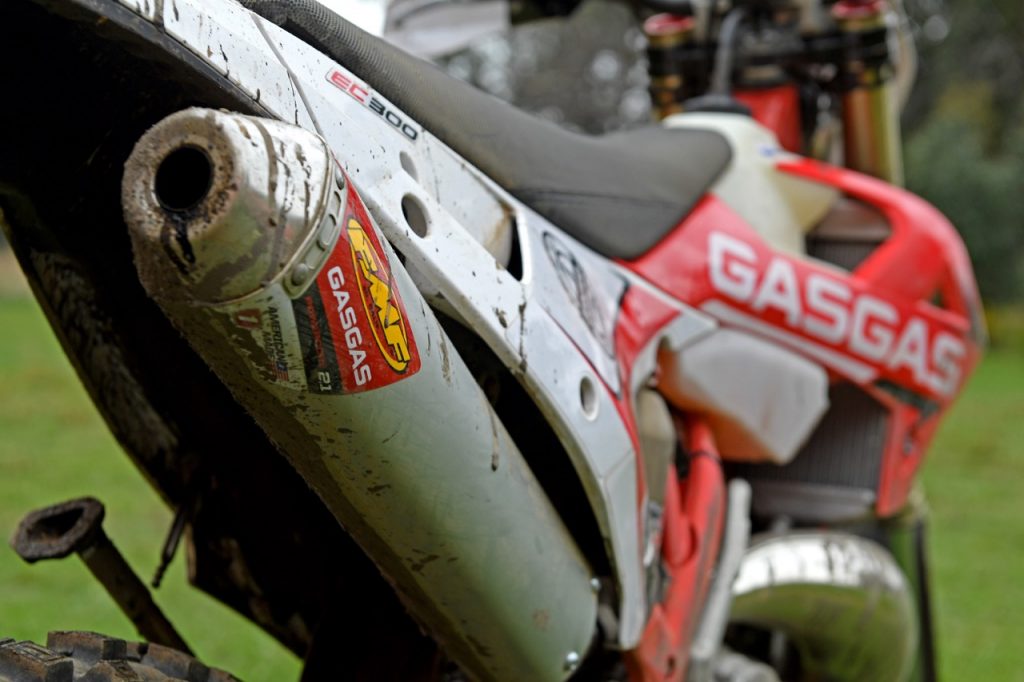 VERDICT
After bringing out a solid 300cc enduro bike in 2018, Gas Gas has stuck by its machine and tweaked what it needed to. And for me, it ticks a lot of boxes. They have a strong, torquey engine that is more versatile than ever thanks to the map switch, and it will appeal to every kind of rider out there.

But the KYB suspension is what wins me over. It’s awesome. It is so much firmer than anything else out there on the market and yet, it is so useable and has a really broad feel out on the track.

It is firm enough to push along at pace but even when riding slowly, it’s plush enough to be able to ride all day without beating you up. The reigning king of the 300s is back to try and retain its throne and I think that it’s still holding down the fort.