We catch up with Aussie off-road racing export Josh Strang to see how his season is going, what he thinks of the US off-road scene and what itâ€™s like to live with the one and only Daniel Milner.

We caught up with Aussie off-road racing export Josh Strang to see how his season is going, what he thinks of the US off-road scene and what itâ€™s like to live with the one and only Daniel Milner.

ADB: Thanks for taking the time to speak to us, Josh. Youâ€™ve had a string of solid finishes in the GNCC series, four podiums including two wins. Whatâ€™s the level of competition like?
Josh: Yeah, the start of the year has been good. We had four really solid races and one not-so-good race but, overall, it has started well. The national enduro series [Kenda Full Gas Sprint] is also running and it has been not too bad considering the different style of racing. So overall it is good.

I think we have done 12 races, starting in the middle of February, so it has been a busy year already. TheÂ competition is alwaysÂ difficult. I feel like KR (Kailub Russell) and myself are going to be at the front most of the time, I try to worry about my racing only and training during the week, not about the level of competition. IfÂ Iâ€™m below the bar I try to work harder to get up withÂ everyone.

ADB: You had a not-so-good start at the Big Buck round of the GNCC and reports said it was due to a small mechanical issue right before the race. What exactly happened and how do you recover from a stressful incident right before a race that would obviously play on your mind?
Josh: Yes, the Big Buck start was strange. Saturday I tried to ride my bike as much as I could because we have no practice, so we are trying to warm up in between camp sites and other races so it was difficulty. Everything was fine Saturday but on Sunday, right before we were going to the start, weÂ had a small problem with the clutch. Not really sure why it happened but it was all fixed before the start, I just turned up a tad late. Fashionably, ha! 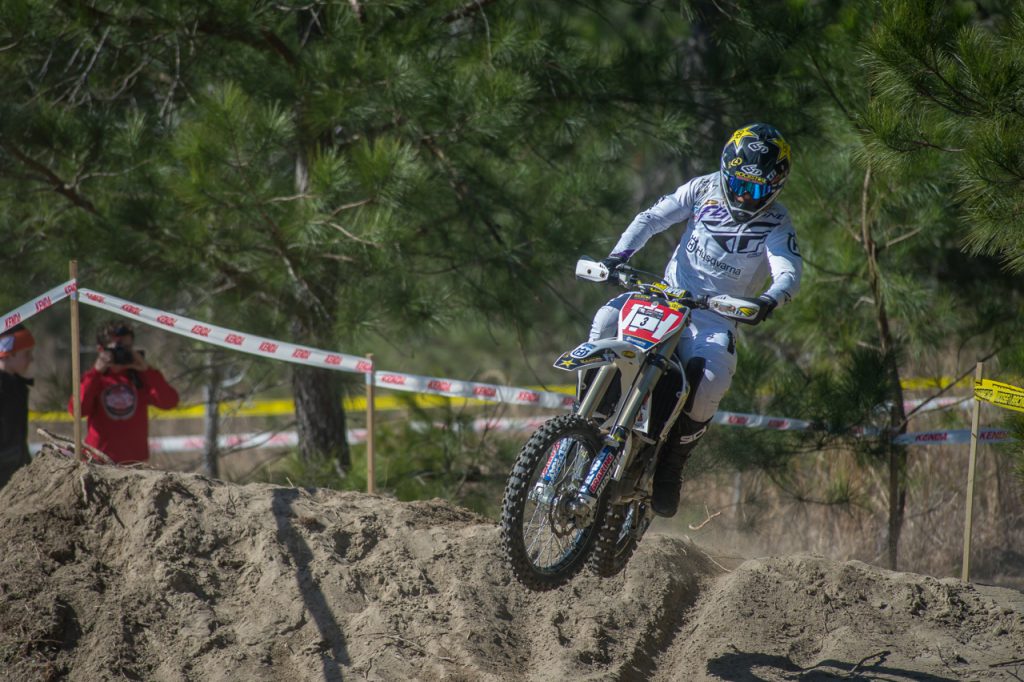 ADB: You placed sixth at Round 5 afterÂ getting stuck in a mudÂ hole, is that right? Would you say it was the toughest race of the series so-far?
Josh: The last round was a bummer for me, I lost the points lead and just had some bad luck. The race was shortened and the track also shortened due to theÂ conditions being so bad.

The first lap I was behind a rider who started to get stuck so, to try and get out of that line, I turned into a bigger hole. That mistake cost me a few minutes lifting the bike out to where I could get going again. (outÂ trailriding it would be a lot of fun but not while you are racing for points and a championship). I managed to get back into the top five but then my bike stopped running, again not sure what happened but it was so wet the team thinks it was an electricalÂ problem. Again, no oneâ€™s fault just something that happens in those races.

ADB: Itâ€™s your second year racing for Husqvarna, whatâ€™s the team like to work with?
Josh: The RockstarÂ Husqvarna team is great. They do everything that they can do to get me comfortable on the bike and at the races. Itâ€™s really nice having aÂ team that is behind you.Â After the small problems we had, the team worked very hard to figure out what happened and thenÂ fix it to prevent it happening again. Timmy Weigand is my team manager and we were friends before he came to work at Husky so itâ€™s good to have someone I get along with who also understands racing andÂ off-road.

ADB: There have been some complaints about the Husqvarna fork being too harsh, something to do with the bottoming valve? Have you found this and if so what have you done to fix it?

Josh: Our team runs WP cone-valve forks and the Trax shock. A little advantage to having factory support is all the goods. I had a 250 two-stroke for a while last year that I rode a little MX on. IÂ didnâ€™t mind the fork, I think itâ€™s all aboutÂ getting it set up to suit theÂ riding style, I ran the fork stock. But I also like to think that I can use all of the track and miss the bumps IÂ donâ€™t want to hit.

ADB: Your contract is for two years with Husqvarna, is that correct? What are you plans for next year?
Josh: Yes, I had a two-year deal with Husky. We have just started talking about a renewal so that is something that will come along in a few months Iâ€™m sure.

ADB: For Australians who only know the AORC, whatâ€™s the level of competition like over in the States? Would a top-five Aussie AORC rider who does well in the cross-country format do well in the US?
Josh: Honestly, IÂ couldnâ€™t give you a great answer as IÂ havenâ€™t raced AORC in Australia for so long. All I have to go off isÂ Milner who is over here now. We have a new sprint series here in the states, any top-five Aussie could come over here and run top five in that,Â Iâ€™m sure!

The cross-country racing here is a lot different to home. I could beÂ wrong, but AORC gets 200-300 entries at the events. We have 200-300 entries in the PM bike race alone, there are five or six other races with the same number of riders before we even get on the track so the amount of lines and bumps is insane. I think that is where Milner or any other Aussies struggle, picking the fastest lines and reading the trail. I wish more Aussies would come over and give it a go. 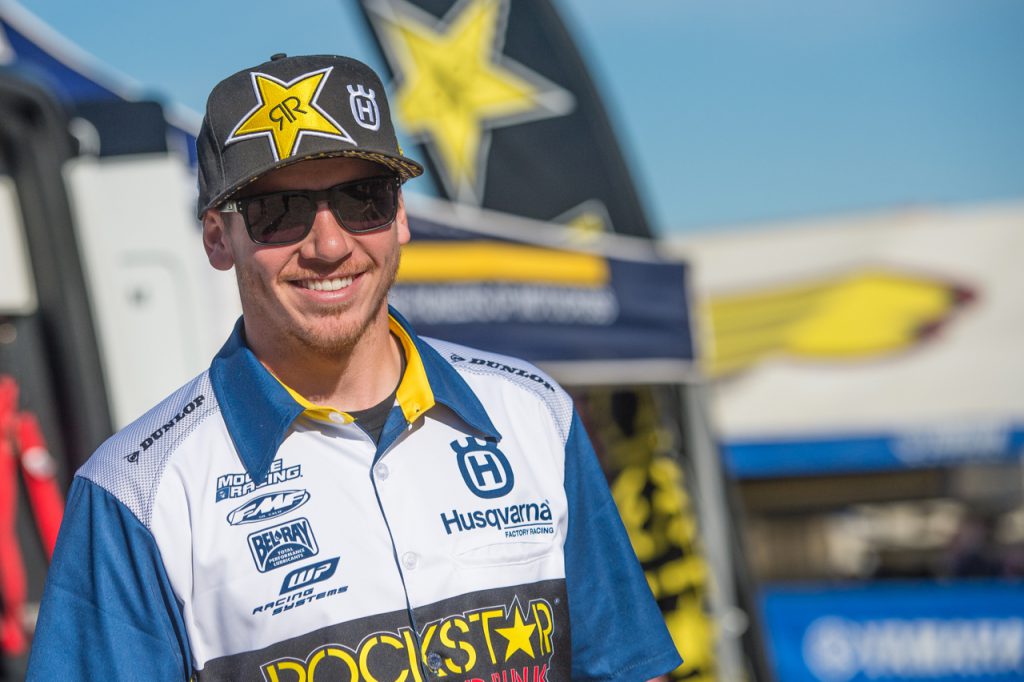 ADB: Is there the potential to earn more money racing off-road in the States, and why?
Josh: I think it is fairly similar. TheÂ difference is the cost of living here in the US is so lowÂ compared to home. Â For a privateer or someone trying to get their own sponsors it may be a little better. A lot of companies do small contingencies and you can get a lot of free product to go racing. We also do twice the amount of racing so the opportunity forÂ bonus money is greater and on â€˜offâ€™ weekendsÂ you can find a local race that pays decent money to win. It all really depends on what you want to do. You can race in Australia and do 10 weekends a year with the same guys or you can bust your ass andÂ travel to Europe or the US and see the world racing aÂ dirtbike. Â I know which I prefer.

ADB: Youâ€™re living with Milner at the moment, weâ€™ve all lived with mates in the past. Whatâ€™s five most annoying things about living with him?Â

ADB: YouÂ obviously heard the A4DE got postponed, do you plan on coming out to race it now that itâ€™s going to be in November?
Josh: If it was changed a month earlier I think I could have, I get married on 5 November and if the date had been changed earlier I wouldnâ€™t have already booked a honeymoon, I could have worked the A4DE into it. Â Kind of bummed about it but itâ€™s all good. Â Hopefully next year.

ADB: Good luck for the rest of 2016, mate. Thanks for taking the time to talk to us.

Josh: Yeah thanks, it was good.

The bar has been raised once again, but who gets the chocolates for 2019? Find out in our 2019 450 Motocross shootout.

Your motorcycle trailer sits in the backyard unloved for months at a time so expect trouble when you expect it to perform.