The KTM 125 SX represents a bike that behaves very differently from what you might expect if you haven’t ridden a 125 in the past five to ten years. Light-switch power delivery and none in the basement are things of the past, with the 2017 125SX delivering smooth, manageable power.

ADB test rider Wes Mills is a long-time two-stroke fan. We paired him up with 15-year-old and multiple Australian Junior Motocross Champion Rhys Budd to get their opinion.

KTM has made the switch to Mikuni carburettors across the two-stroke range, replacing the Keihin. “The old KTM used a Keihin carby and it used to have problems with not revving out up top,” he said. “The Mikuni in the bike we rode today had the opposite problem. It still needed a little bit of work, but we sorted it by raising the needle clip, but it revs so much better up top. It’s jetted too rich from the factory but it was easy to fix.

“As it was jetted today if you were to ride a sand track or a fast open track it would be been great straight off the bat. Here today it was a bit slick and I was grinning ear-to-ear. On the pipe the stock KTM is so much better than my personal 125, which has had lots of work done to it.”

Rhys added: “I thought it would be a little bit better for a stock bike. The jetting needed a bit of work and cleaning up the engine would help get even more power.”

The 4CS fork had it critics so KTM has gone in a totally different direction for 2017, opting to go with a WP AER 48 fork.

“The air fork surprised me. I thought I would have to change my riding style to suit the air fork but you can use your normal riding style for a traditional oil and spring fork. If no one told you, you probably wouldn’t know,” said Wes.

“I’ve ridden bikes with air forks before and you seem to lose a little bit of feel with the front wheel but I didn’t lose any with the KTM. I didn’t feel any push from the front-end, I was very confident and comfortable straight away. The track was really slick so we dropped the pressure in the fork to 8.4 bar and that only made it better.

“At no point did I feel the front wheel pushing, and the track was very slick. Something else that is worth pointing out is some suspension only works when you go fast, but the air fork will work well for any level of rider because you can make such big changes to the feel of the fork at the track with a small air pump.”

Rhys said he’d been riding the 2017 model with the air fork for a while. “I went back onto the 2016 model for a few rides and the difference was huge. Coming into corners, the air fork would get more traction and soak up the small braking bumps better than a conventional spring fork. I found they just get a lot more traction than the 4CS fork.

“The shock is very predictable and does its best to keep you and the bike going in a straight line. The rear-end didn’t kick around through the whoops and considering the slick conditions, I was getting good traction.”

Wes liked the new footpegs. “They are a little longer and make shifting easier.

“Brembo brakes have a really nice feel all the way through. Being a new bike, the pads bedded in during the day and the brake feel only improved.

“The clutch and transmission is phenomenal. For a brand new bike to be able to change gears that easily, normally a new bike the gears are tight, but the KTM 125 was very smooth and effortless to change gears.”

Test riders found the stock tyres didn’t perform that well on the Oakdale Motocross track. The rubber is suited to softer terrain and Oakdale is a hard-pack track with a lot of blue groove if it hasn’t been ripped.

We can see a lot of older guys taking a serious look at this new crop of 125s. For people who may have raced when they were young, went away from the sport for a few years, and are now getting back into it, the two-strokes and 125 in particular are a great bike to look at. 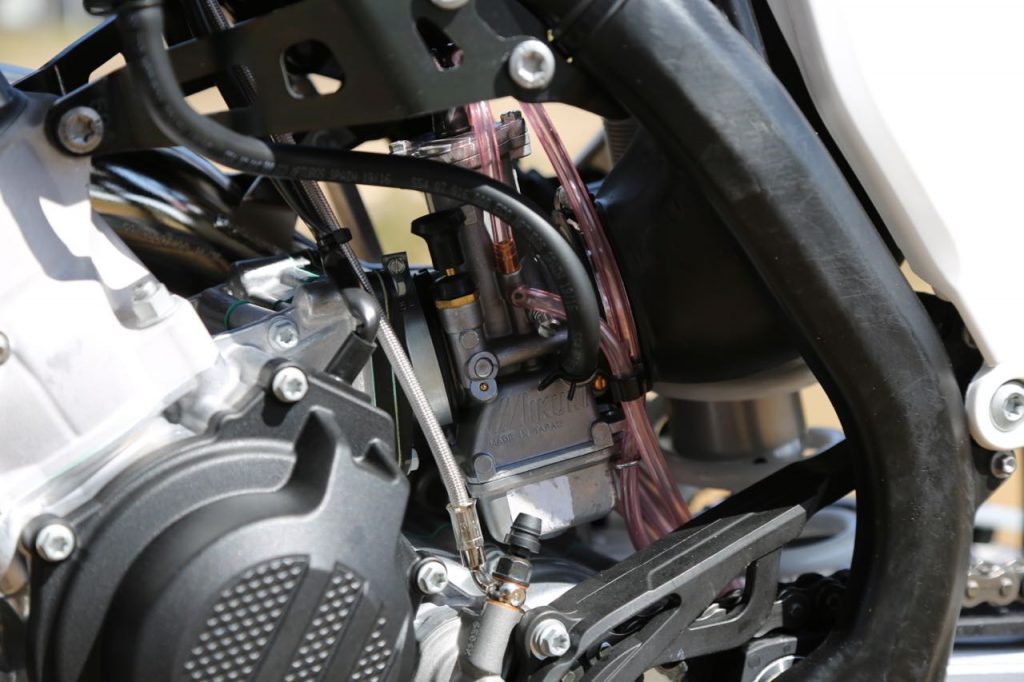 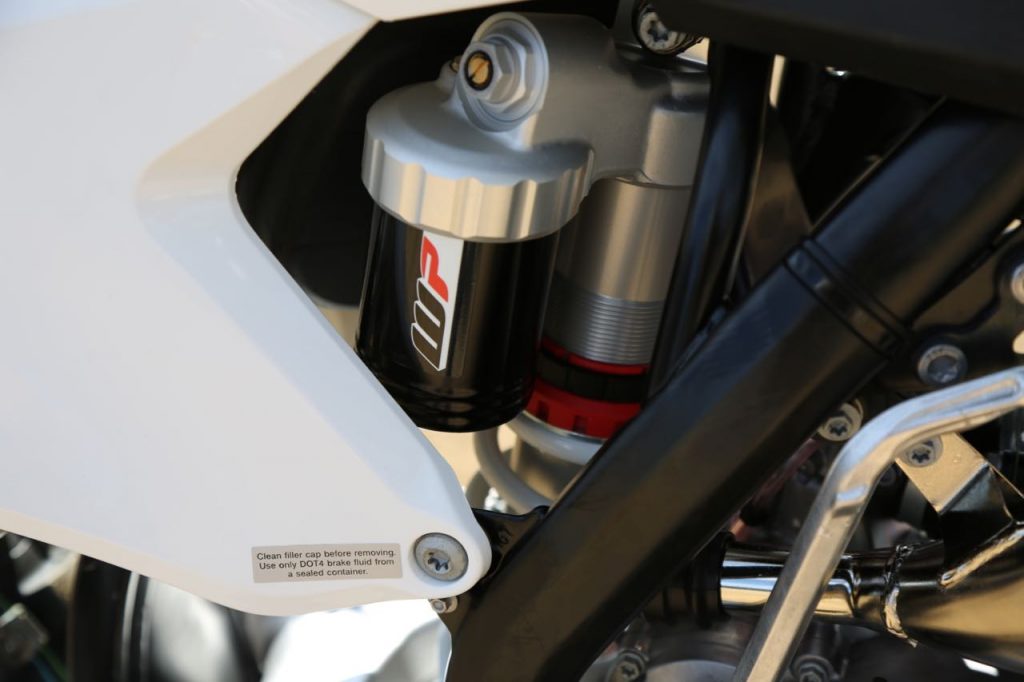 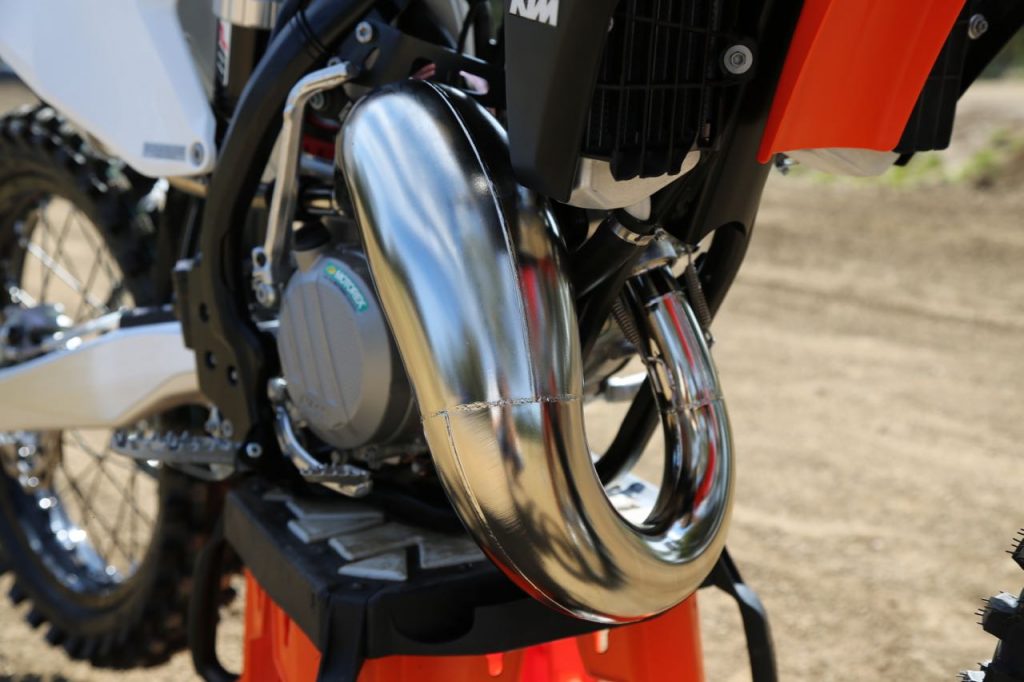 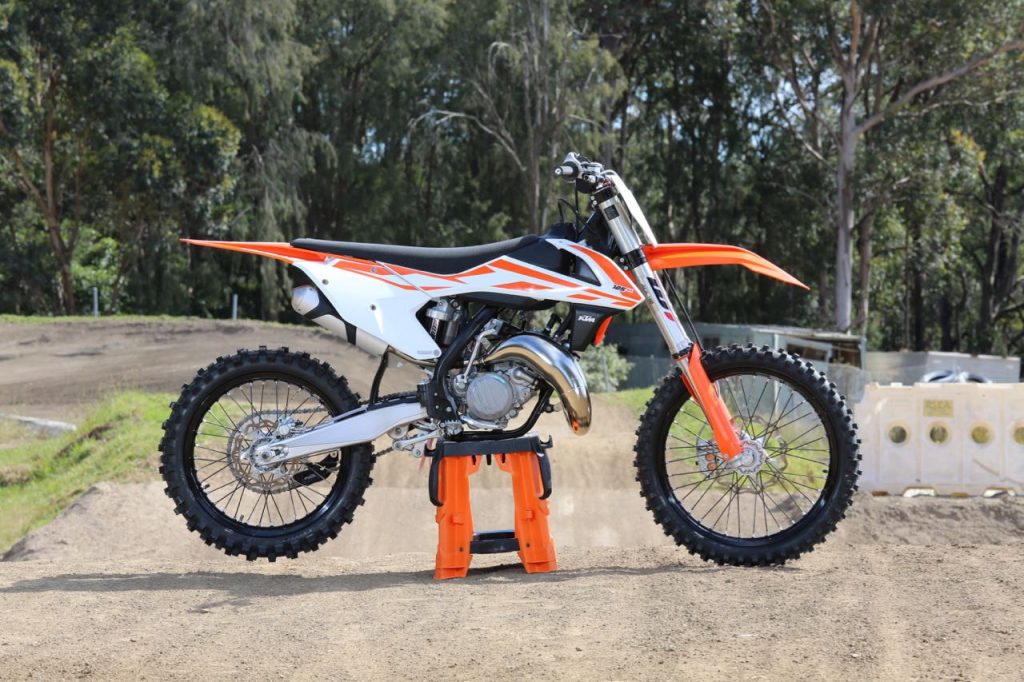