They all come from the same factory, so what differentiates a KTM from a Husaberg from a Husqvarna? And which one is best? We test them to find out.

With a continuation of KTM dominance, the revitalization of the classic Husqvarna, and the final chapter of Husaberg, there has been a lot going on under the KTM Sportmotorcycle AG rooftop, and it doesn’t take a mechanical guru to realise that the products being shot out the end of the Austrian factory are three machines that have a lot in common.

An attentive eye however will pick out quite a few differences between these brands. Some are easy to identify such as different forks, tank shrouds, guards, sub-frame, shock mechanisms (linkage vs PDS), ergonomics and of course the colours. Other differences are harder to spot such as suspension internals and settings, among a few other things, which Boydy covers here. We decided it was time to take these three shades of orange out for a test with the goal of determining how their differences effect the personality of each bike, and which combination of parts and components results in the best overall package.

Our testing grounds offered some nasty hill climbs with loose rocks and tree roots, some nice flowing singletrail and a chopped-out test loop for a race-pace impression. Even though these bikes now share common ancestry, they are far from the same and each offers its own unique handling characteristic. 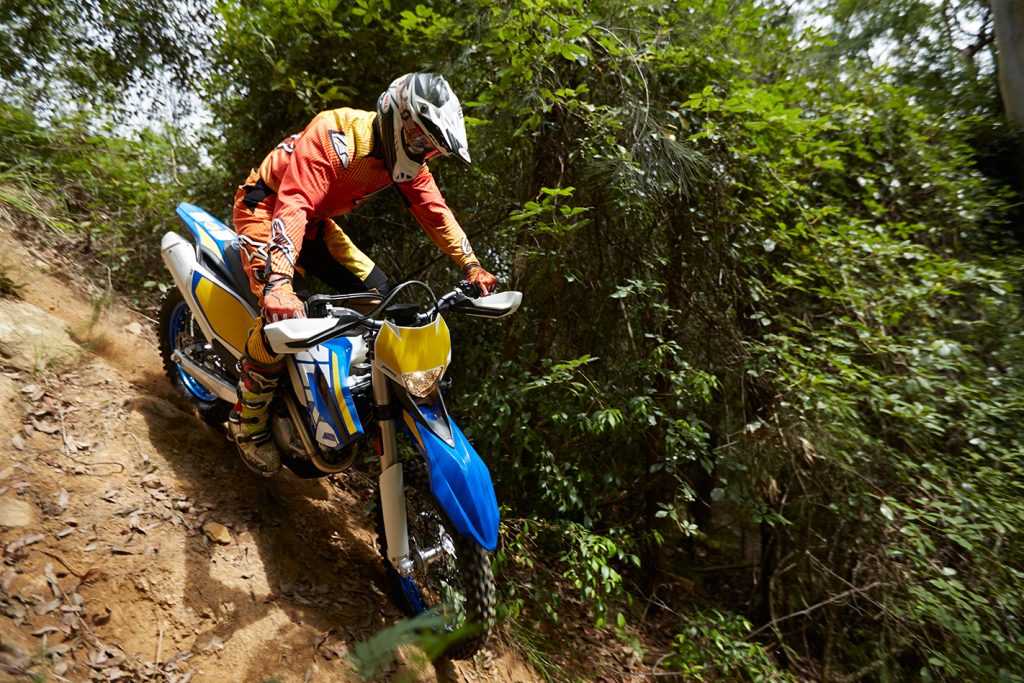 The KTM has distinctive ergonomics with a flatter cockpit that allows you to sit in an aggressive riding position. The Husky and Husaberg have an almost identical subframe which makes for a slight dip in the seat and, in my opinion, gives an old-school feel to an otherwise extremely modern piece of kit.

When trailriding through the tricky rock garden hills we were playing on, I found the KTM’s fork would deflect off the loose rocks and nasty stuff much more than the other two bikes. This made it challenging to stay on line and led to a few mistakes. However, race pace is where the KTM feels more at home due to a stiffer standard setting. The front stays higher in the stroke on the Kato, which left me feeling more confident when smashing through the big bumps.

I can’t say that I could pick much of a difference between the front-ends on the ‘Berg and Husky, but can confidently say that in standard trim the 4CS fork used on both bikes is superior to anything else out there for general trailriding or in technical and extreme terrain. The 4CS is extremely plush and soaks up small rocks and roots so well that you can pick a line through nasty sections and 99% of the time you will glide through easily; the fork helps the bike to stay on track and in the process makes you look like a master in front of your mates. The 4CS fork also offers a good range of adjustment through the clickers and preload on the springs, which I’m sure could also offer an adequate setting for race-pace as well. But as pace increases the standard settings feel too soft and the fork uses a lot of its compression stroke through deep holes and hard landings. By making some valving and spring adjustments, however, the 4CS fork works well at race-pace as evidenced by its results on the world racing stage. 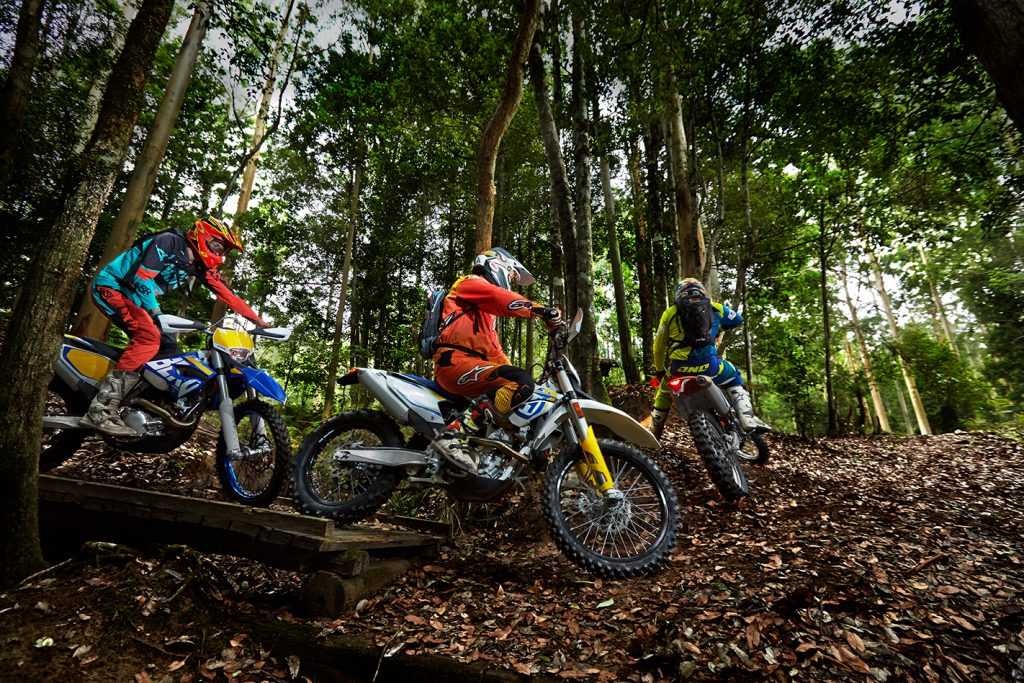 The differences between the shock set-ups on these three bikes tells a similar story. The KTM has a stiffer standard setting which handles hard hits and doesn’t wallow or feel too bouncy, but is a little more difficult to get the power to the ground on technical stuff, whereas both the Husky and ‘Berg have a much softer setting that worked great across the small choppy terrain we were riding in, but felt very soft and bouncy at a faster pace. So bouncy, in fact, that on the entry of corners I found that I had to wait until the rear-end had settled right down before I could get hard on the throttle again, otherwise the rear tyre would hop out of the rut or miss the line completely. It was difficult to pick between the linkage on the Husky and the PDS on the ‘Berg.

Both felt great in the technical sections and made it easy to gain traction in conditions that would normally require the not so stylish, inspector gadget leg paddle to get through. The only difference I could point out is that the Husqvarna set-up felt a little better when hard under power and exiting bumpy turns. This could be because linkage on the Husky allows the bike to squat in the rear a little longer and therefore hit these sections with a longer geometry, with the shock itself also in a better position. But could this alone suggest the Husqvarna has the best rear-end set-up? Well, not necessarily soâ€¦ the downside of this set-up was that on odd occasions the Husky would pack through certain sections (not rebound completely after each bump and therefore compress further and further) and eventually result in a big rebound that felt like a kick up the backside.

The newest kid on the block (or in this case, the newly converted) usually gets all the attention and this is the case with this trio. These three bikes are obviously very similar, and I would certainly be happy on any of them, but the Husky just seems to be the best package in terms of handling and its potential for versatility. With just a few simple clicker adjustments, and maybe some spring changes, the Husqvarna offers a package that anyone could use in any aspect of off-road riding or racing. The Husaberg feels so similar to the Husky that it comes in a close second. That leaves the KTM, which is a great all-rounder but needs a few mods to its suspension to bring it up to the standard of its siblings.