The 1980s had some super models that paved the way for many of the luxuries that we see on modern dirt bikes.

There is something about a vintage bike that gets everyone excited. Throwing a leg over a VMX or vinduro machine takes us for a stroll down memory lane and all our past experiences and good times shared around the track come flooding back. Seeing bikes more than 30 years old in such great shape got me all excited as we headed out to the Junior Trials Minibike Club at Gwandalan to give them a test ride around the motocross track and enduro trails on the clubâ€™s grounds.

The first bike I got to swing a leg over was a 1983 Suzuki RM250 and the second a 1980 PE400. Both bikes were in great shape, having been recently restored and upgraded by owner Darran Wright who competes on them at the Heaven VMX Club. 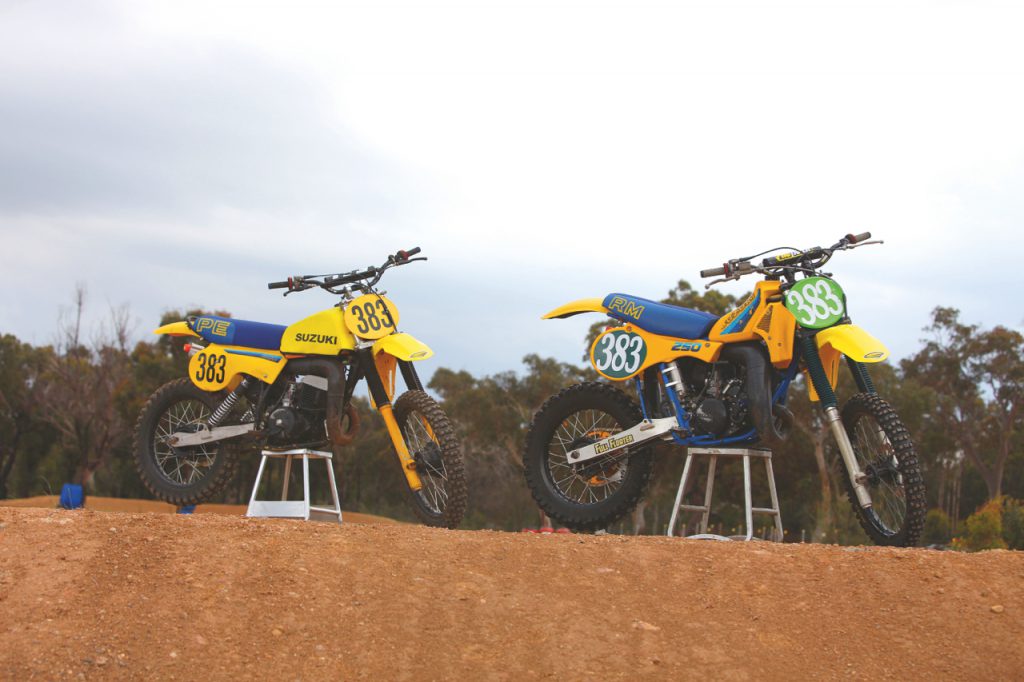 The RM250 is an â€˜83 model but is fitted with a fork and disc brake from an â€˜84 Suzuki TS, which replaced the original twin-leading-shoe drum brake.

The fork is fitted with a set of PD valves which give better damping and provide feel more like a cartridge fork.

The intake reeds have been replaced with a Boyesen set and a spacer has been fitted to move the reed block further back from the manifold and allow the reeds to open further.

The â€˜83 model cylinder head was replaced with a â€˜82 as that had a higher compression ratio. The cylinder has been ported by Boydâ€™s Moto Surgery and then matched to the cases. The carburettor was replaced to do away with the temperamental original and a complete DG exhaust system has been fitted.

The airbox is a copy of the Suzuki factory unit from 1983. It is only a single-sided unit instead of being double-sided like the original.

I would compare the power to that of a modern 250cc two-stroke. Just the way it comes on is totally different. You had to rev it up to get it to go because there was minimal power down low. But you needed to have a lot of throttle control because if the powerband hit when you werenâ€™t expecting it then the bike would take off wheel spinning.

The power ran out quicker than a modern bike, but if you kept shifting before it dropped off then this â€˜83 model would have no problem keeping up. The front disc is a welcome addition, trying to stop this bike with a drum would have been an accomplishment in itself.

The seat and tank are an odd shape, which makes it difficult to get forward right to weight the front wheel but, surprisingly, the bike still steers reasonably well. The suspension surprised me quite a lot. The rear of the bike sits very high and has a long stroke.

The damping worked well in both the front and rear and the bottoming resistance was greater thanks to the adjustable PD valves in the fork.

Jumping this bike is no problem. I would be more than happy to tackle 90 per cent of the motocross tracks in Australia on this bike, no problems. 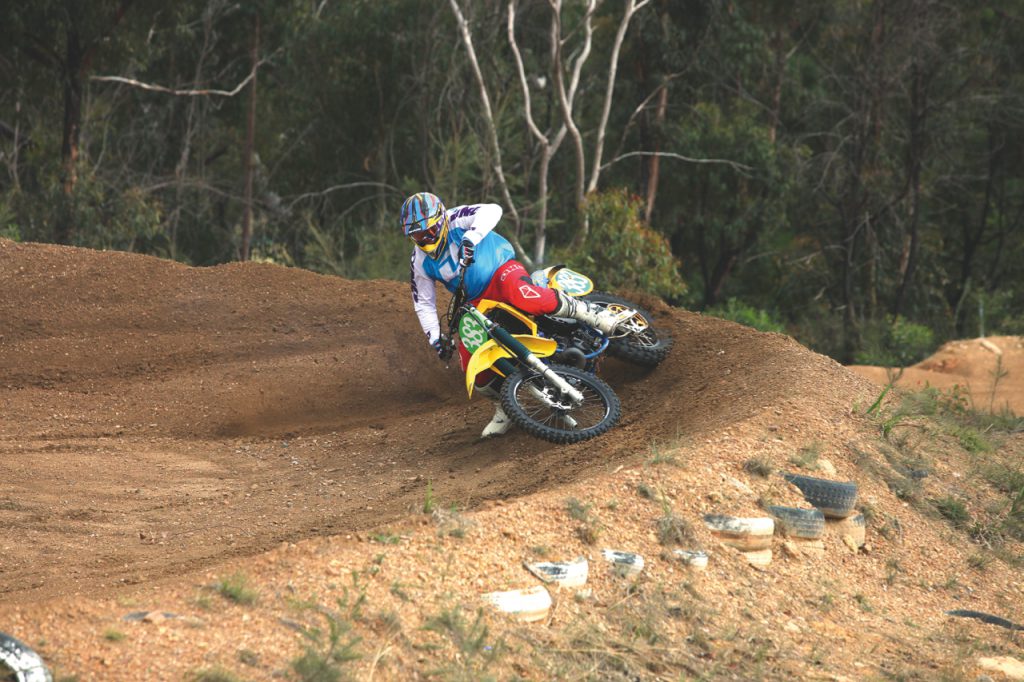 The PE400 was a 1980 model. It had all the ADR equipment removed and was set up more as a motocross bike. It had a twin-leading-shoe front drum brake, as the twin-leader is slightly better than the single-leader but still nowhere near as affective as a disc set-up.

The PE had a set of Boyesen reeds fitted and the cylinder ported and the transfer ports matched to the cases. Boydâ€™s Moto Surgery also machined the head for more compression. It has had the carburettor replaced with a more modern unit as the original one had seen its day and the rear shocks have been replaced with Hagons and a DG silencer fitted.

Riding this bike on the trails is a whole lot of fun but, at the same time, a whole lot of work. You must really pay attention to exactly where your wheels are going because if your concentration fades ever so slightly then the PE will bite you.

It bounces off rocks and bumps instead of skipping over them and the low footpeg height means you need to be careful with what you go riding over.

Due to where the shocks mount, the plastcs bulge out making gripping the PE tightly with your legs is difficult. This causes you to use your arms to keep you over the top of the PE.

The power curve is narrow but sharp. Surprisingly, the engine has enough down low torque to tractor along and pull you up hills without even coming into powerband.

The biggest thing I struggled with was the unpredictability of the power. This could kick in anywhere, anytime and you had to be hanging on or you were going to be in trouble.

Overall the PE was a challenge to ride but a load of fun. The 400cc of power and the drum brakes werenâ€™t the best of combinations but it certainly made a few downhill sections very interesting. 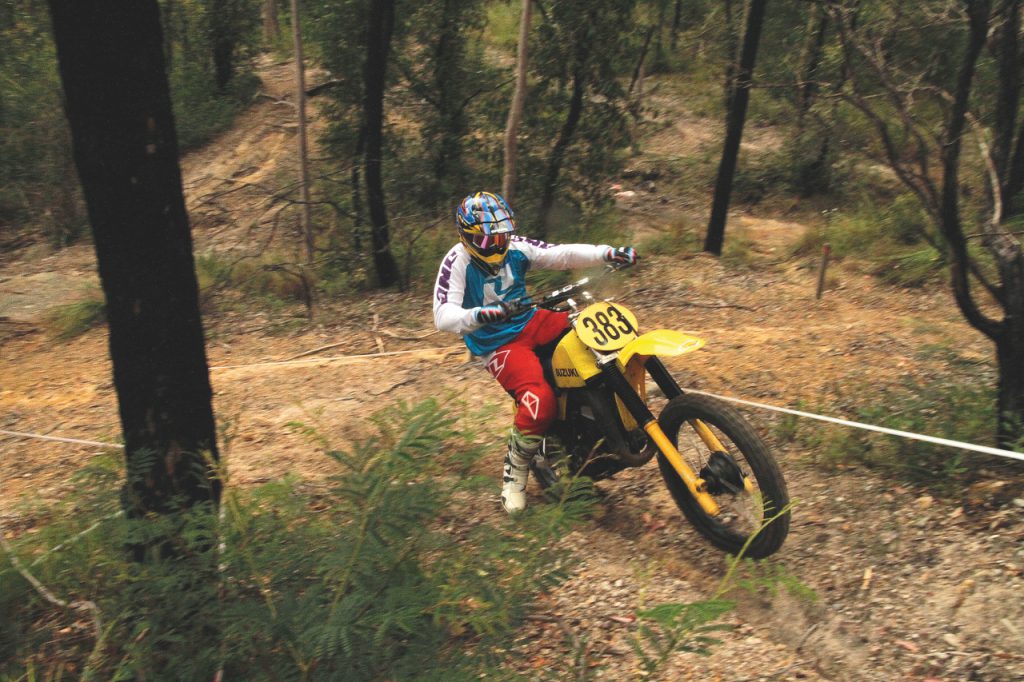 After spending a day riding these bikes I have a new-found respect for the guys who raced these bikes at the elite level. You have to be thinking ahead to when you want to accelerate and when you plan on braking. You have to be in the right gear at all times and you have to be prepared for that brutal power. With open-face helmets and leather boots with little to no ankle support, these guys were doing it tough. Kids these days will never understand what it was like to ride a bike before we got full travel suspension and computerized ignitions.